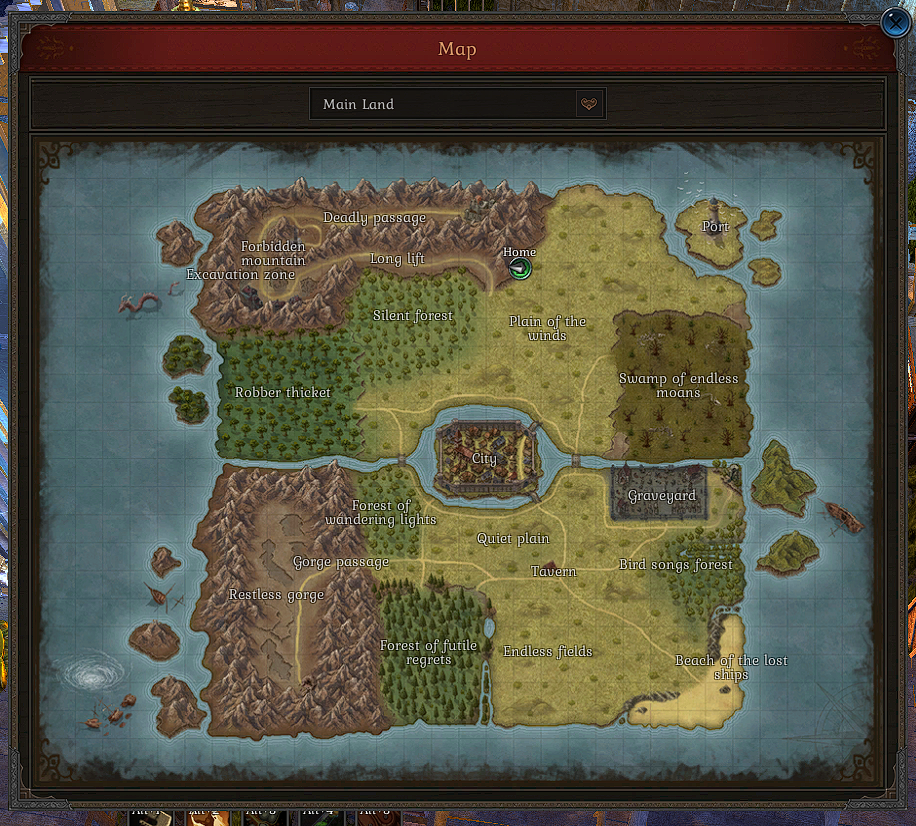 Next there is Graveyard this area has low level skeletons and is easier for new people starting out Also 2 Dungeons here. (Will show and explain them later.

Next is Robber Thickett there are random Hideout dungeons (ill explain those later). Also Wolfs level 35 that can bleed you and dangerous Bears 2 of them level 50 that will rip your face off if your not careful! There is a World Boss Tree Boss Aka Creaky Aka Ent here as well. (ill explain him later)

Next is Swamp of endless moans no dungeons here and strong swamp creatures I think around the level of the wolfs either way this is a very strong area and these monsters can kill you fast so be careful also theres a World Boss SNAKE boss in the zone (ill explain him later).

Next is the Long Lift area there is a World Boss Mountain boss (ill explain later) up the path and at the end FORT Dungeon this is a endgame dungeon. These mobs are high level around 50 plus and will smack you VERY hard proceed with caution.

Thats it the 5 deadly pvp areas of Terra 2 Hope that was helpful next lets go into all the world bosses and dungeon bosses and explain how to kill these dudes!

World Bosses what are they? PLUS all Dungeon locations!!!!!

In this game we have 3 World Bosses.

Ent (Tree Boss) Creaky. Whatever you want to call him this is what he looks like. 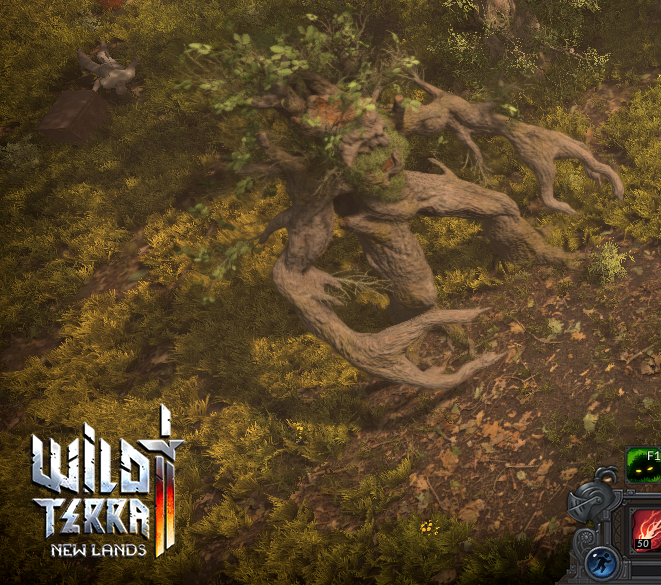 And this is where hes located. 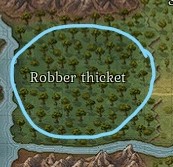 Next we have the SNAKE BOSS!!!! 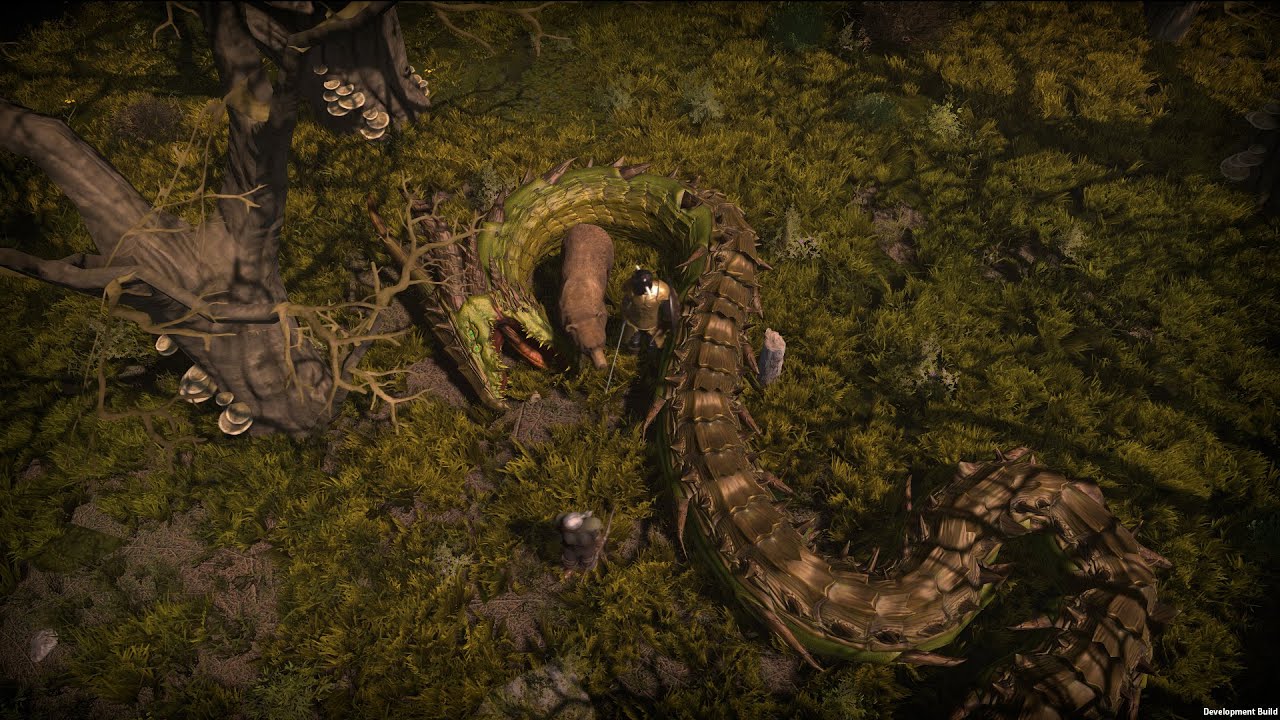 And this is where hes located 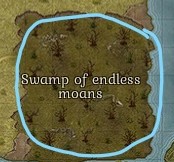 Finally we have the Mountain Boss!!! 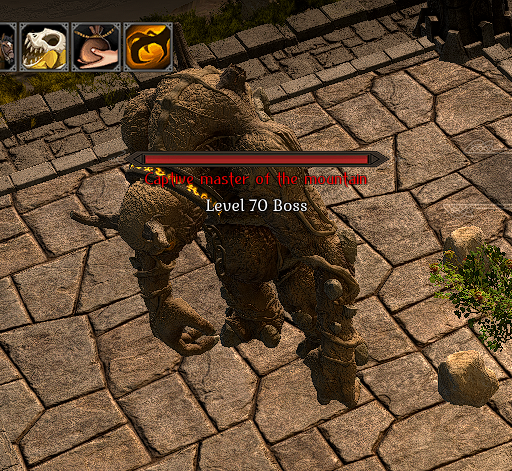 And this is where he is located

The Tree boss you need a high level Lumberjacking to gather his resources.
The Snake boss requires a high level of skinning to skin it.
The Mountain boss takes an Extremely high minning level to mine its resources.

These world bosses will give you materials to help you craft your Exotic Weapons and Items ingame!

They are on a 1 hour timer after death!

Next lets talk about all the Dungeon locations!!!!!!

This is a Graveyard Dungeon there are two of them inside of Graveyard they look like this (these are soloable dungeons only you cant join with your friends. 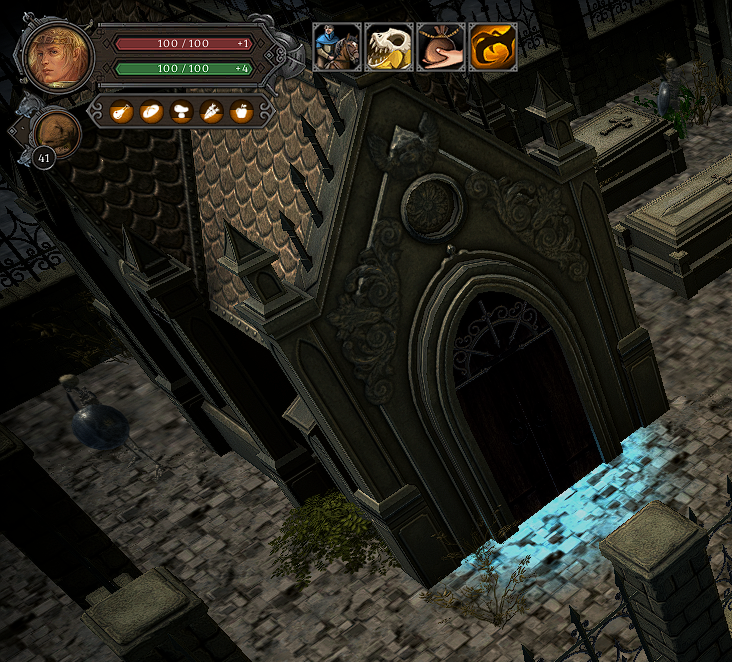 They are located here.

Next Dungeon is a HIDEOUT dungeon it is a soloable dungeon as well it looks like this on the ground to find it. (Make sure to bring a hatchet to break the barricades inside this dungeon) 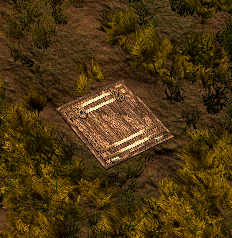 You can find these Hideouts by searching around these areas 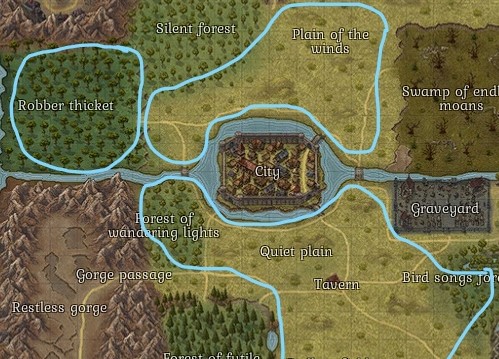 Next we have Gorge Mines!!! (This is a soloable dungeon as well!) this is what it looks like 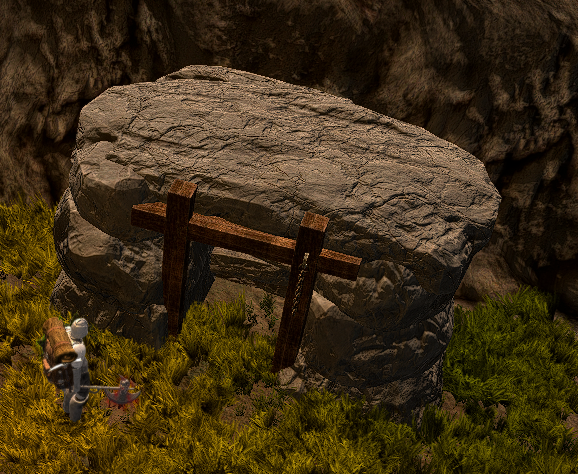 And this is where its located.

Next we have Gorge Cave!!!! This dungeon can have a group of people in it. This is what it looks like. 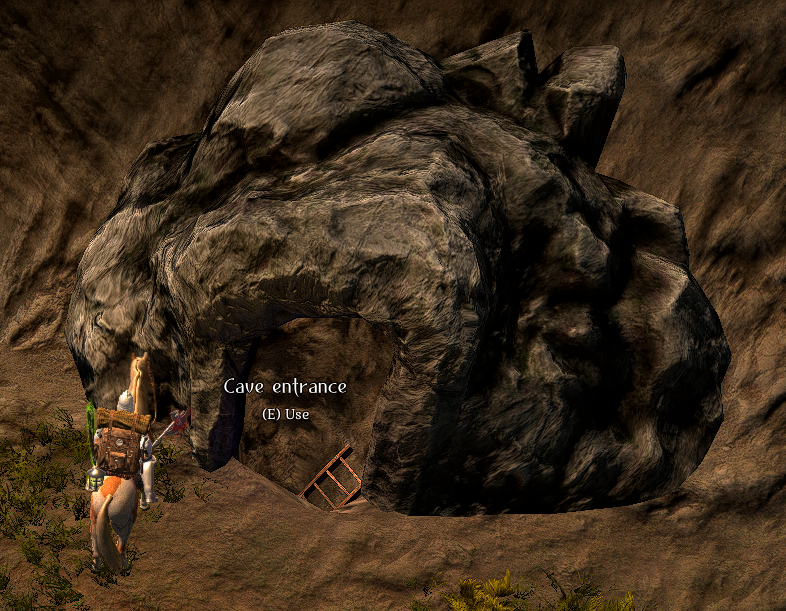 And this is where its located. 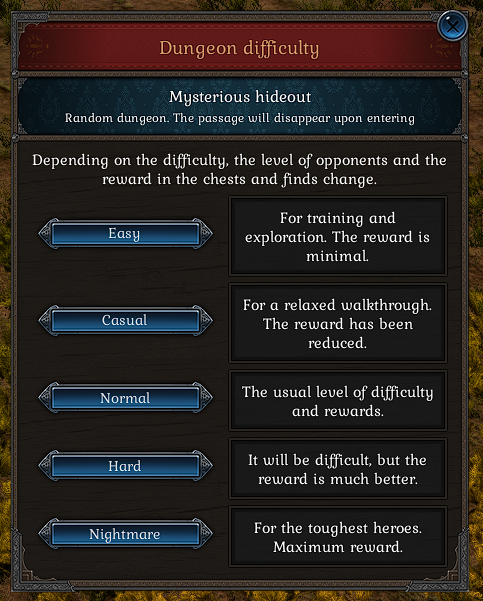 Alright thats all the world bosses and dungeon locations but how do we kill all these bosses and World bosses? Well lets hop into that next. This will be the biggest part of the guide and most important so pay close attention.

So many world bosses and dungeon bosses! How do I kill them all?

Alright so you want to become a god among men in Terra 2 killing then pay close attention as I go ahead and explain in detail everything you need to know to kill all these strong monsters in the game. Make sure to have a good pet when killing these guys the BEAR pet works great.

These are the skeletons you will be collecting bones from when you start the game I forgot to mention what they look like I think. (If you have been studying this guide all the way through then good.) 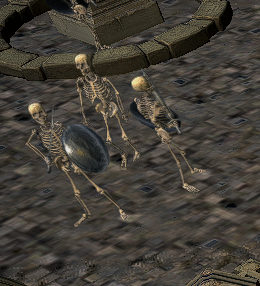 First off we have the Cultist in CHURCH dungeon. 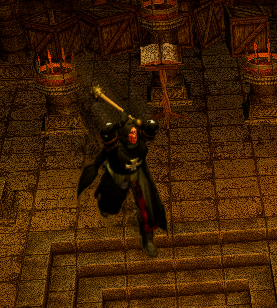 This annoying monster can stun you and is overall a pain in the butt. Once he stuns you he can bypass your defense skills and wallop you hard! Lets talk about countering him. 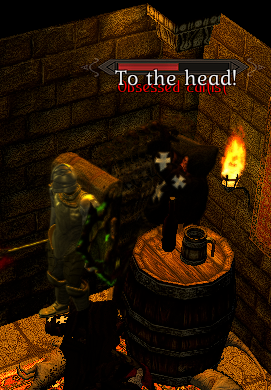 HOW DO I KILL THIS GUY?
When you see “To the head!” above his head hes about to stun you. Pop your Absolute Protection Skill to become immune to his stun!!! then stun him back and give him the hurt! (you cant stun him in HARD and NIGHTMARE Modes.) Make sure your using your defense skills I showed you about in the Armor Abilities Section.

Next we have the BEAR BOSS in CHURCH dungeon. 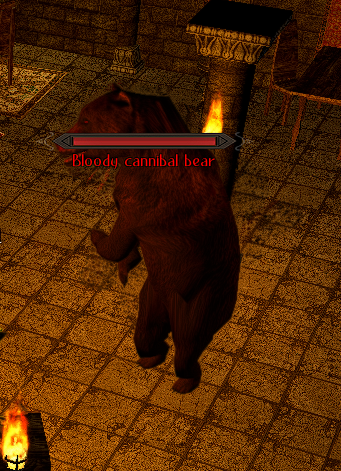 HOW DO I KILL THIS GUY?
Pop your defense skills and get ready for a hard fight when you get him down to half health he will pop this symbol above his head get ready and then just run around circles in the room to avoid him hitting u while its up. He will use Bleeds on you so make sure to use Wide Bandages to take them off. (Ill post wide bandage icon below the bear symbol) 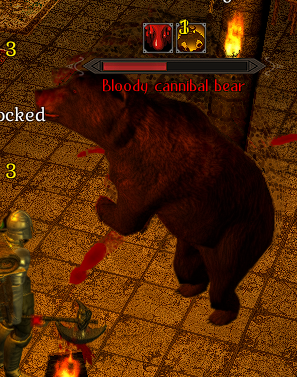 Next we have the MAD NECROMANCER you will encounter him in the Hideout dungeon. This guy is a pain so make sure to carry with you some Antidotes they will help protect u against his poison (will show the icon of them below the boss)

HOW DO I KILL THIS GUY? Easy pop your defensive skills and smack the crap out of him while popping your antidotes when he poisons you.

Next we have the statue bosses in Gorge Cave! 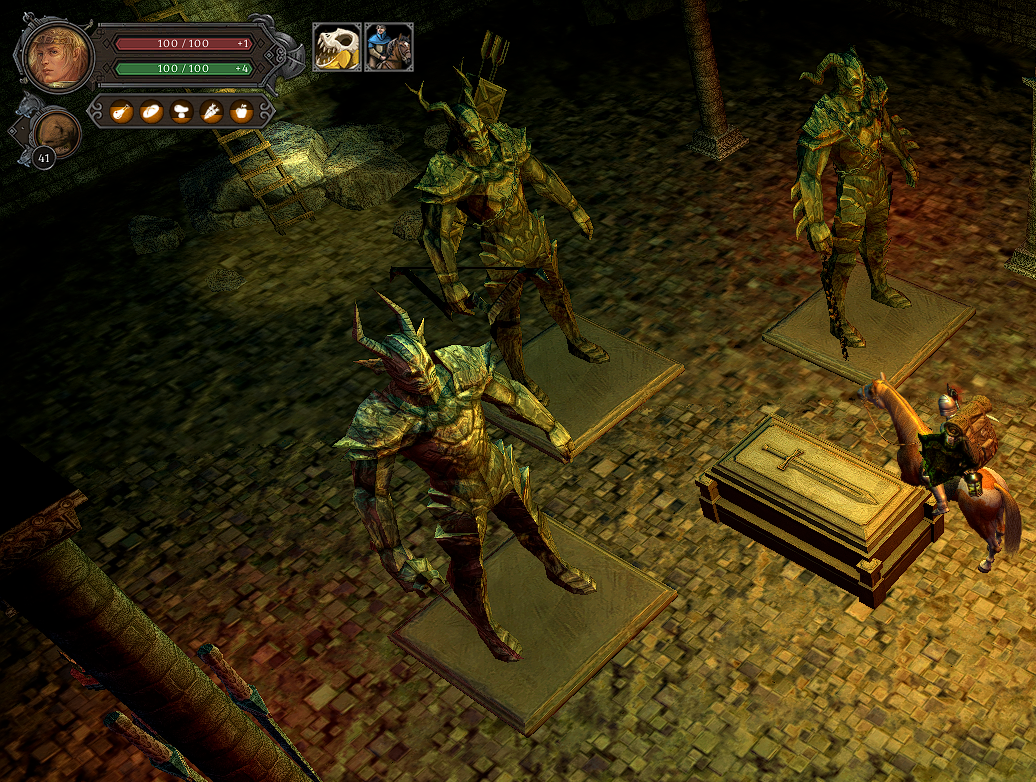 HOW DO I KILL THESE GUYS?
Simple hit one and then run away so this symbol will come off of him. 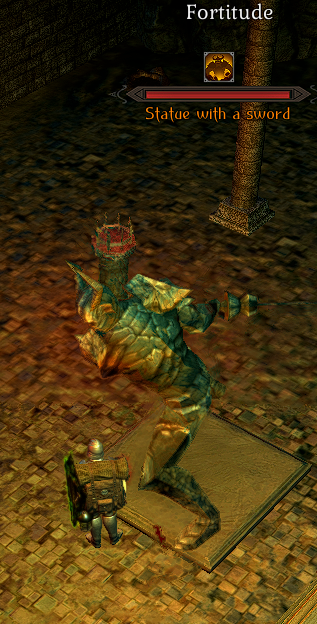 Next go back up attack him have your friends position behind him (except for sword guy) then proceed with your defense skills and smack the hell out of him while using your Wide Bandages when he bleeds you just like on the bear. (The sword boss bleeds the rest wont). This is a tanky battle and having friends is a must also maybe someone to heal you. These guys are no joke.

Next we have Dwarf Commanders (3 of them in FORT dungeon) 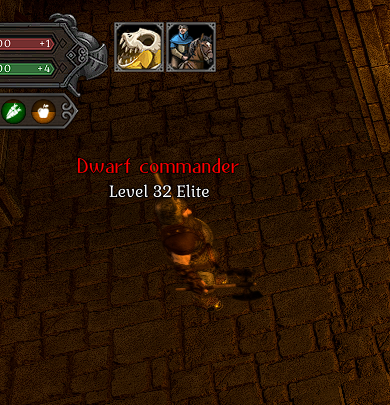 These guys are super annoying make sure to have stunny and slow them and stun them with your skills I showed you in the weapons ability page. Keep them away from your party they will whirlwind attack area of effect bleed everyone and all around pain if you guys keep them stunned they can be an easy fight.

Next we have the endgame Boss the BEETLE BOSS!! He is at the end of the fort dungeon (I didnt mention the mini bug boss because hes not that hard to beat just tank him. 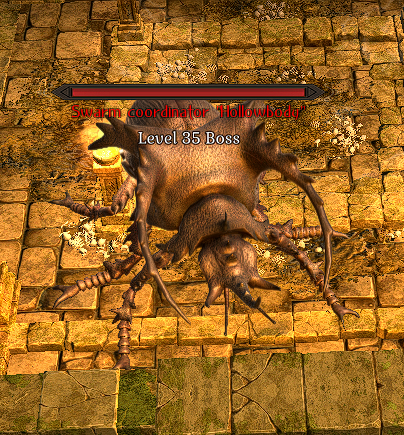 HOW DO I BEAT THIS ANNOYING Freakin BOSS!!!!??

Ok so this is a hard fight. You want to bring Antidotes with you (incase you get poisoned) and use your defensive skills and smack the crap out of him. At certain point he will fly up in the air and make a sound (LISTEN FOR THE SOUND) that means hes about to area of effect poison your whole party. Pop Absolute Protection I showed you this skill before to block that poison attack! Ok keep killing him and then he will spawn a BABY Bug get someone to off tank this and have your other party members down it quick while you tank this Beetle boss. Also be careful and listen for a Certain sound like a HISS when hes lower on health hes about to Smack you with a Penetrating Strike (THIS ATTACK HURTS BAD!!!!) be sure to pop Absolute Protection to block the hit. With enough practice and also having your friends heal you with Healing Ointments etc this can be a pretty easy fight. Practice makes perfect! Nightmare Difficulty this Boss fight changes you will have to switch players tanking possibly and keep eachother healed up. You Might need to bring some juices with you they restore stamina but you cant use them while getting hit! (heres what they look like)

¿CÓMO MATAR A ESTE JEFE TRUCO MOLESTO??!?!!
Esto requerirá mucha práctica. Find a tree next to the boss pop Absolute Protection after you smack him with stunny. Hide behind the tree and dodge his poison attack. TIME for hard part. Pop your defensive skills as they go down and when he hits you he will bleed you make sure to use Wide Bandages to keep the bleed off you. Use your SLOW and STUNS for extra damage! If he peels off you onto your party Provocation him! Bring those juices I showed you and wait till he smacks you then pop one if you need stamina!!!! Bring Antidote just incase you get smacked by poison. Also have your friend in your group heal you while you tank the boss. (You will most likely need group of friends to kill this boss or get lucky with the tree and take no damage just bleed and take it off). Once they fixed this Tree glitch you will have to tank him yourself with the poison so bring alot of Antidotes if you can no longer do this trick!

HOW DO I KILL THIS BOSS?!?!?!
Simple this guy is very easy. Just walk up to him and he will try to hit you move away quick and just keep smacking him with your Stunishment!!! It helps to have a group of friends to whack him down he has a ton of health!!! Thats it this is a super easy fight once you master it. If you cant get out of the way in time just pop an Absolute Protection.

YOUR JOB AS A TANK IS TO KEEP AGGRO!!! Always be using Provocation if these bosses come off you and go after your party! It will help keep them on you at all times. Shield Strike can help as well! (Es la habilidad en la que los aturdes con tu escudo)