Most of the game is straightforward but there are some tricky parts! For example if you see this…; 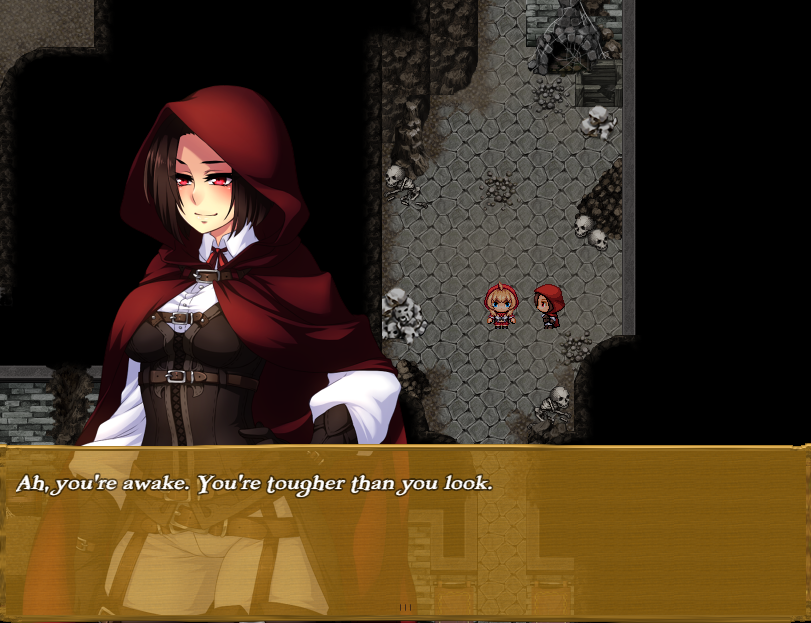 it means you missed something! This section will try to explain these less obvious elements.

There is a “;hard path”; and an “;easy path”;
The game is forgiving but there are often rewards for not using the forgiveness. For example in the first real dungeon if you die you will be immediately rescued by another character. But if you tough it out without dying until you meet them you get a nice piece of equipment! Not every example gives a usable reward immediately but in the postgame many of the other rewards turn into good accessories. And you’;ll want those for the postgame!

Bangville items start stronger but weaken toward the endgame
The game never fully explains this but for example “;Bread”; heals 25% of your HP while “;Largo, Hard Loaf”; heals a flat 100 HP. Early on the latter could be better but it will quickly fall behind. So use your Bangville items first and save your other consumables for later!

There are two elements: fisico y magico
Technically there are some others but those are special cases. Most of the time if enemies are weak to magic they are weak to ALL magic so feel free to use fire spells on fire enemies. If an enemy seems too durable try switching to the other type of damage. Early on you can use “;piercing”; skills to avoid enemies with tough physical defense but later on there will be enemies that can block those too. Basically just keep this in mind and use the Slayer skills to test which defense the enemy has.

Go all one way or the other when it comes to Dreamers
At certain points in the game you’;ll be given a “;command”; from higher powers called Dreamers (you’;ll know when you get there). Things like “;don’;t harm any living being”; or “;don’;t give in to greed.”; There is usually a reward for following every single rule and a different reward for BREAKING every rule. Doing some of both won’;t get you anything! So either avoid all enemies and do everything you think the Dreamer would like or slaughter everything and do the opposite whenever possible.

Some skills have level requirements
If a class doesn’;t have any new skills to learn but it isn’;t mastered you probably need to level that character up more. You can keep earning AP for later but I suggest switching them to another class until you hit a big level number like 10 or 20.

Everyone needs crit protection
Enemies can do critical hits and they can be brutal (especially bosses). Certain rare accessories (like the Scratched Bracer) can completely neutralize enemy criticals. Consider these NON-optional! Some bosses can crit frequently so if you aren’;t shielded you’;re going to see characters getting one-shotted.

Equipment comes first
There are lots of shiny things to spend your money on including permanent boosts and new character classes. I recommend buying these only AFTER you’;ve bought newer equipment for your current party. Better equipment is usually the fastest way to boost your stats and you’;re going to have a bad time if you ignore it.

Money matters until late game
In most RPGs there comes a point where you have more money than you could ever need and Once Ever After is no exception. But that point comes pretty late into the game so be careful with money! Weapons and armor are usually worth it, while purchased accessories often have free equivalents, and consumables are usually NOT worth it. The unique purchases are most valuable but don’;Foot of the Mountains 2 Recorrido y: I don’;t think a single one of them is missable.

Few accessories are perfect
Later in the game you start getting really great accessories but look out for what they don’;t do! Some block only “;ordinary”; status effects but not the rarer ones and some are the opposite. One might block all status effects but not critical hits…; you absolutely need to pair it with crit protection. Resisting debuffs is great but stacking multiple on one person has diminishing returns. Don’;t forget that passive skills can grant immunity to some effects too. Be sure to balance all the essentials instead of just focusing on stats.

Secondary classes have worse stats but better skills
For example you might wonder why you’;d ever move Wilhelm from his unique class to Woodsman when the latter has worse stats. But if you put enough AP into Woodsman you’;ll eventually unlock Wilhelm’;s best offensive skill! I suggest using secondary classes when fighting normal enemies but switching to unique classes for bosses and challenging areas. You shouldn’;t ever have to grind but if you wanna I suggest grabbing those secondary skills.

Max level is 40
You’;re probably not going to hit it in normal play but there’;s a fairly low level cap. Most of the endgame challenges there’;s no real way to grind past them. Getting unique equipment, balancing accessories, and strategy are generally more important.