As of the writing of this guide, September 12, 2022, only 0.8% of players have this achievement. Looking online I found nothing useful to explain how to do it and then after three hours of frustration in the mission I figured it out. Many will be angry but it is surprisingly simple once you know what to do.

So you may be wondering how my big brain figured out how to do this achievement. The truth is I was trying to get all my units killed in a glorious charge through the artillery cannons guarding the river. You see I had been trying desperately to get at least one contractor to the White Wolves head quarters but either I caught the attention of the Black Eagle tanks or the crack shot local militia mowed them all down like nothing. So as I was now at the end of my patience I went back to where my remaining troops were at the tiny Cartel base you get in the mission and I sent anyone there on a suicide run through the artillery weapons. Well I discovered the Vextra must be driven by a mad lad as that transport just drove right through all the artillery weapons and went to the point marked by a flare with minimal damage. My jaw hit the floor and I was like, no it’s not that easy…is it? So I restarted the mission and played it out as normal but for the second half I loaded up 8 contractors in the Vextra and did it again. Yes that is what you have to do, just do your best to prevent the Vextra from shooting as much as possible.

This can be done with using a single contractor

First, yes I sound insane but hear me out. You don’t even need the Specter tank at all, just the stealth scout car. The scout car is important as it will let you know when the Black Eagle tanks are going past and it is safe to cross the road once you are past the river.

I will show images and I did this with only 1 contractor just to prove a point.

So all that needs to be done is get the Vextra in past the artillery pieces and just try to avoid enemies as the driver of the Vextra has a itchy trigger finger. Going to the bridge, go up and around the garrisoned buildings just so the trigger happy gunner doesn’t kill anyone by mistake.

So once past the artillery go and get off the road at this point: 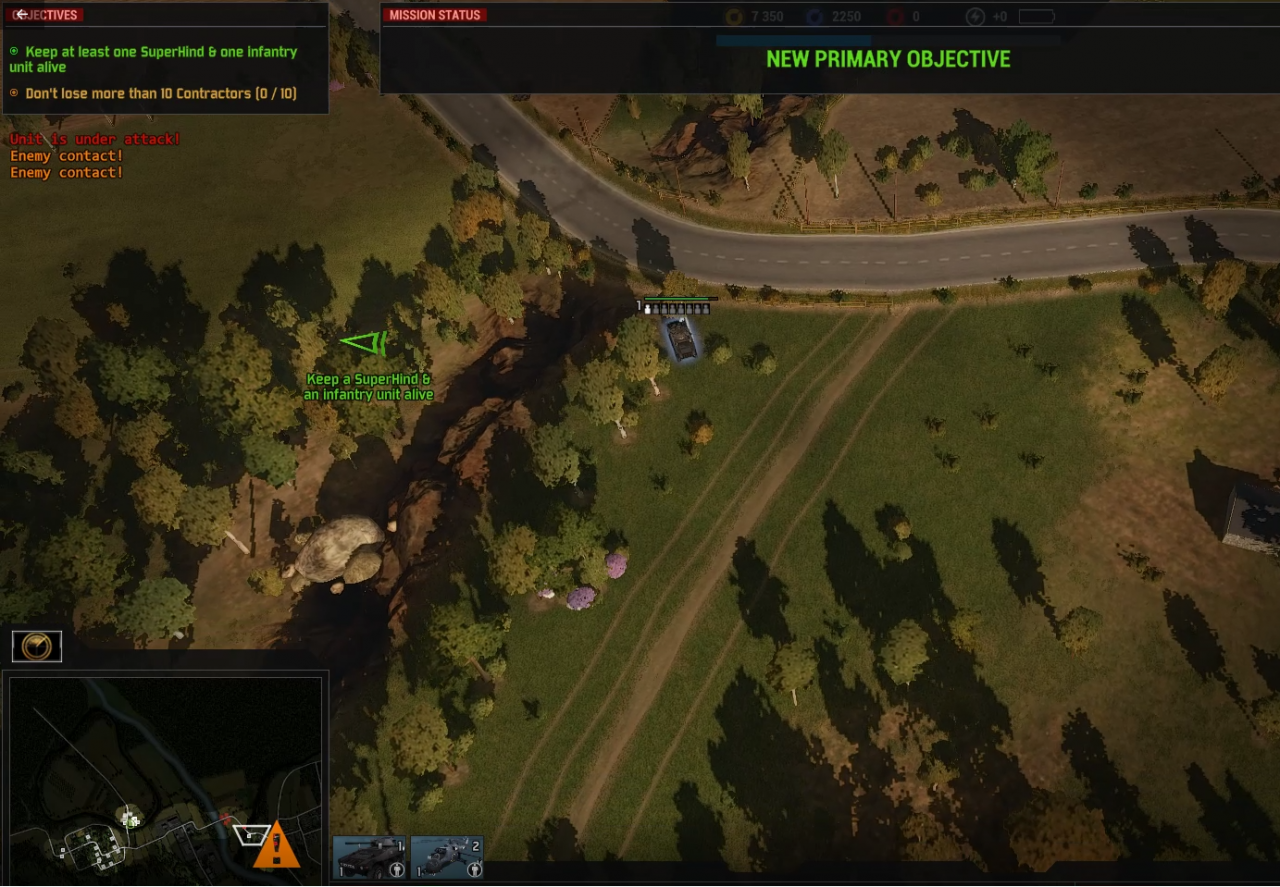 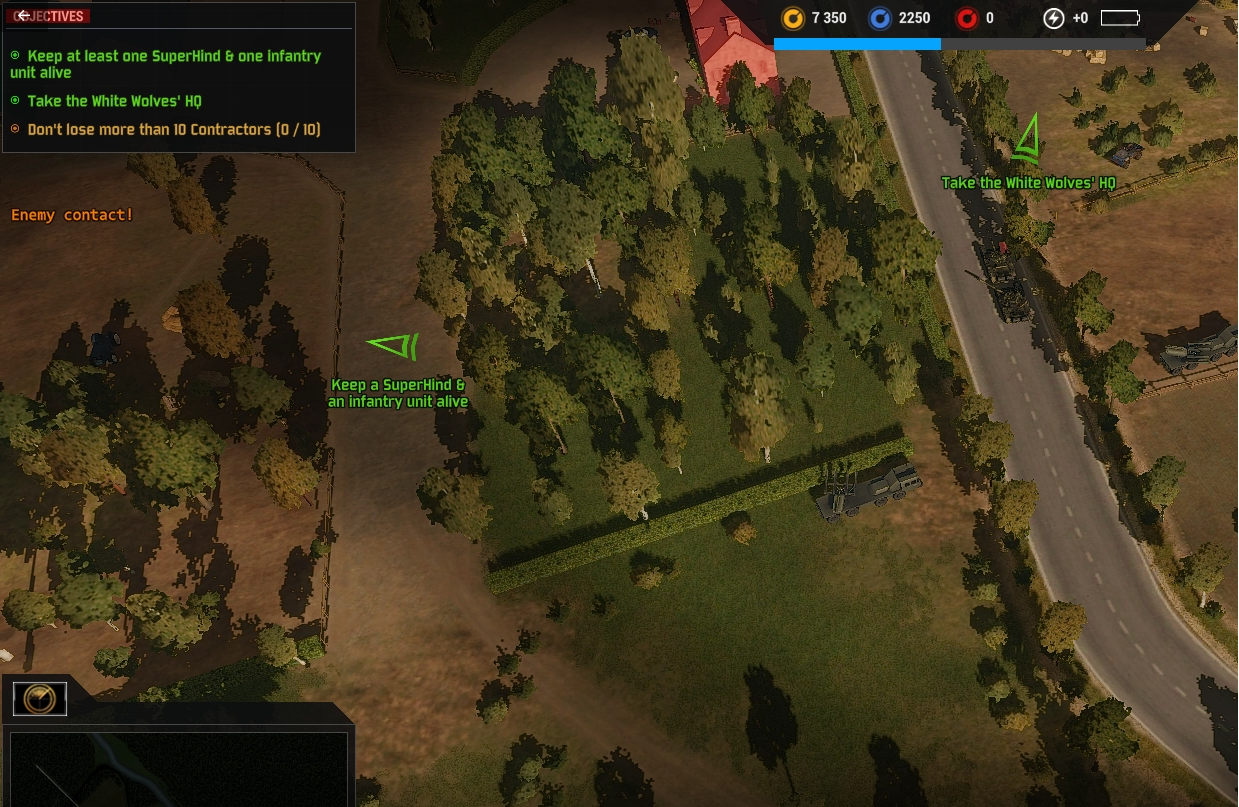 Move up to the next road with the scout car leading and the Vextra hanging back. 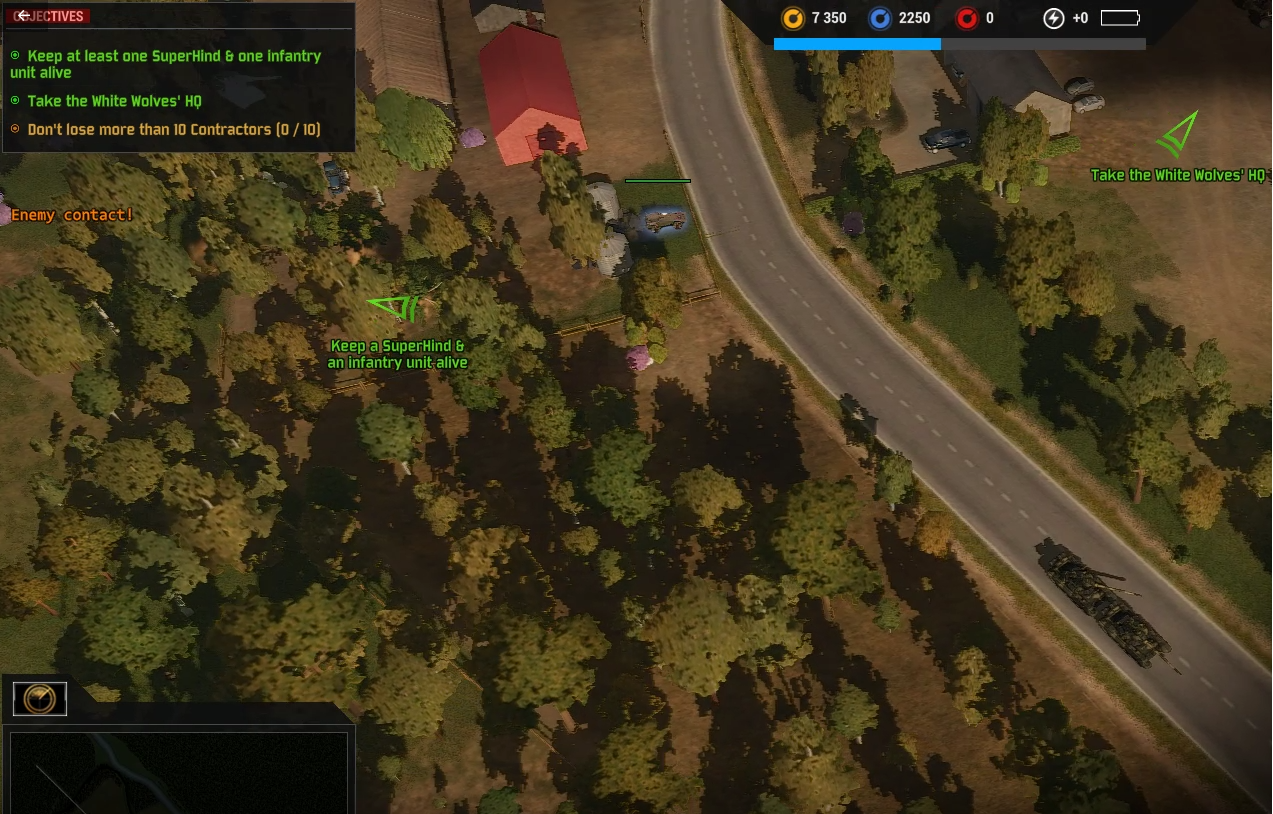 Now when you get to the field with the combines, keep the Vextra behind the combine farm equipment that is the furthest from the road. Again use the scout car to let you know when to proceed. Only go once the Black Eagle tanks are at the point in the picture. I found if I go before that point the Vextra gets in range and they shoot at it. 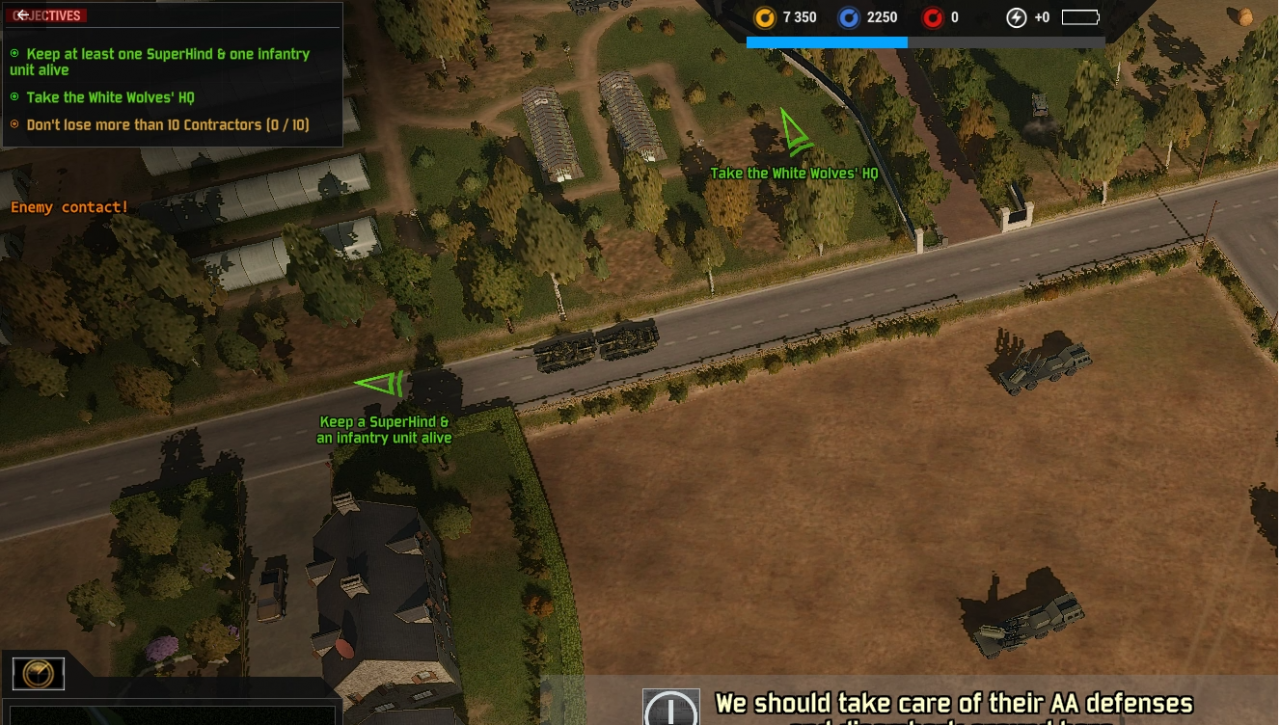 Move the scout car and Vextra ahead but make sure the Vextra doesn’t shoot at the militia in the buildings or gets too close to the road north of the White Wolves headquarters. 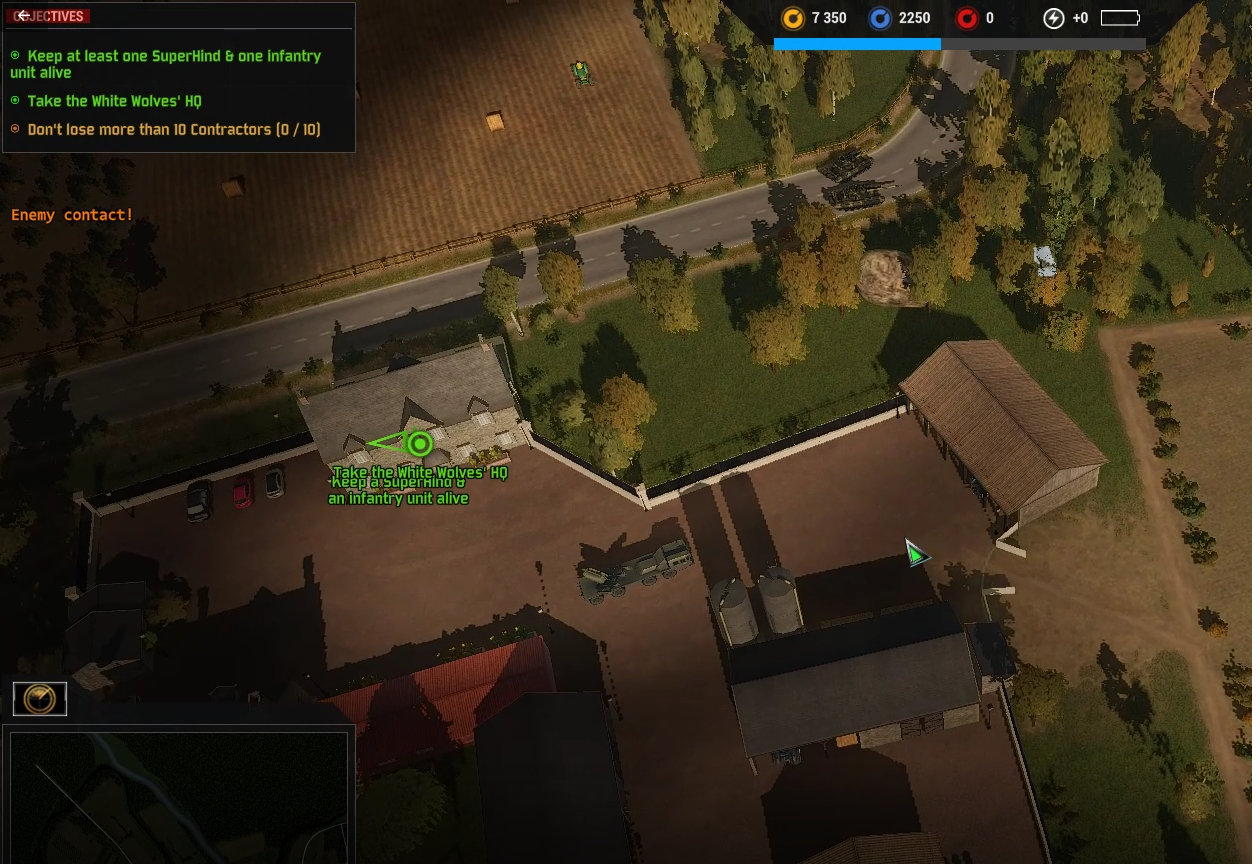 Bring in the Vextra once the Black Eagle tanks are leaving. Bring the Vextra close, unload the contractor and get him to garrison the objective. As long as no enemy has been killed you will get your Wisp of Smoke achievement. I still can’t believe my desire to get all my units killed was what made me figure out how to do this achievement. 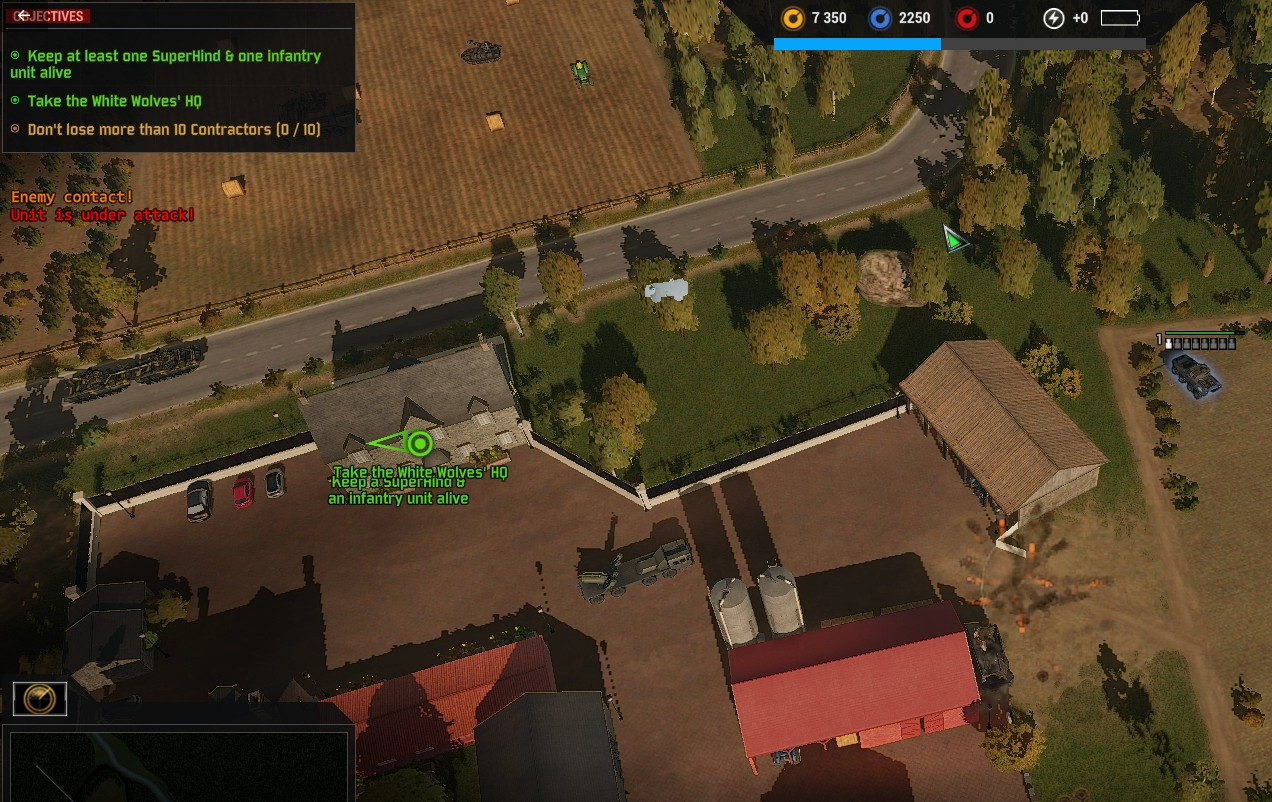 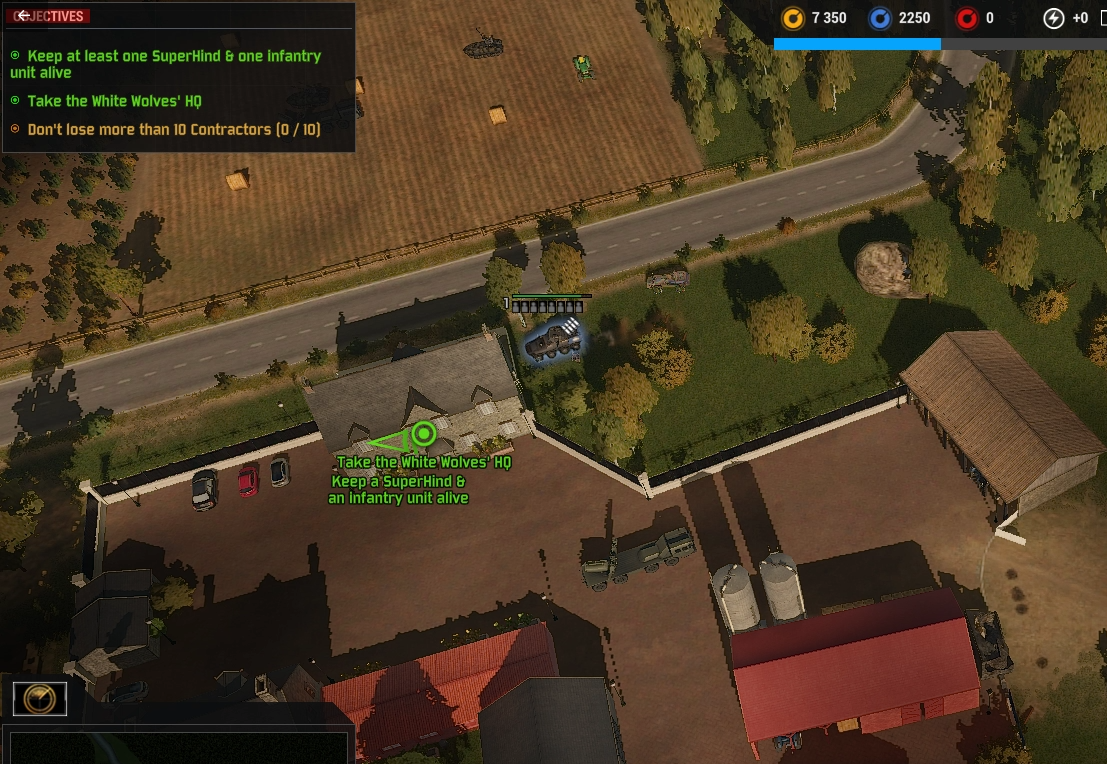