Most things in this game are pretty straightforward to unlock, but just in case anyone wants a list, here you go.

Most things in this game will either unlock automatically, or have fairly intuitive unlock conditions. As such, I will focus on things that are important or missable. I also have not done extensive testing with different in-game choices. What I list in the guide is the way that I unlocked everything, but it’s entirely possible there are other combinations of choices that will achieve the same result. Getting everything WILL require some save scumming, or multiple runs. Pay special attention to Cressa’s Story, which requires that you do most of it in its entirety twice. (See the Memories section for more details.)

I will be referencing all items in the Codex first by page number, and then numerically from left to right, top to bottom, as in the screenshot below. 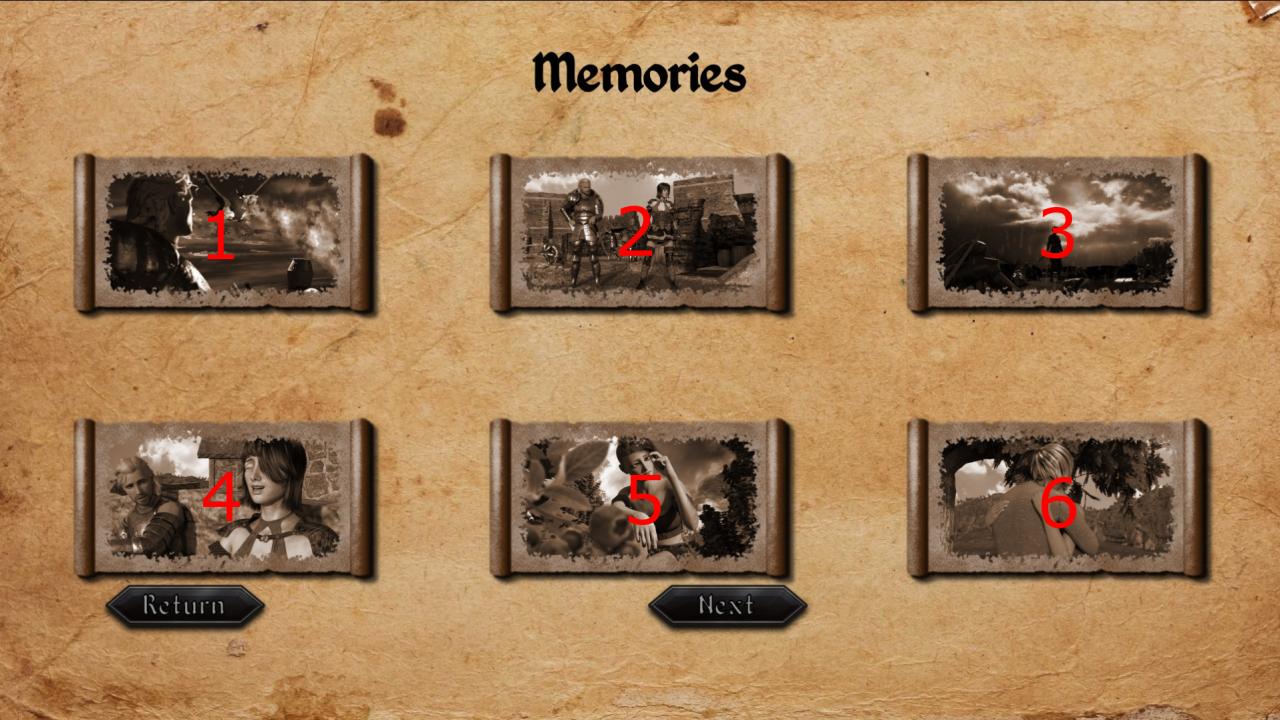 “Naughty” Scenes (you know what I mean)

Let’s be honest, this is why we’re all here. All of these should be pretty easy to figure out, but because most of them are technically optional, I will list their unlock conditions.

Page 1, Scenes 3-5 (Prologue)
When told to head to your room in the tavern after first arriving in Calsith, there will be 4 rooms to choose from. The fourth is your room; the other 3 each have a scene, so play the creep and spy.

Page 2, Scene 1 (Cressa’s Story)
When Cressa offers to use her hands on you, accept.

Page 2, Scene 2 (Cressa’s Story)
To be on the safe side, I recommend both romancing Cressa AND putting her on the path to her good ending. I did this by choosing the following:
-Go looking for Cressa when she fails to arrive at the tavern as agreed.
-Discourage criminal activity every time it comes up in conversation (it will happen 2-3 times over the course of the story).
-Buy the expensive things when given a choice, and never steal anything.
-Tell Cressa that you like the gift that she gets for you.
-Force Cressa to take a break while job-hunting.
-Kiss her when prompted (quiz game results don’t matter, only that the kiss took place).
It’s entirely possible that you don’t need ALL of the above, but this list is guaranteed to give you the option to trigger this scene.

Page 2, Scenes 3-4
When buying a cake, Cressa and Kyra can each be propositioned if you choose to share the cake with them. (Obviously this requires that they be present in Calsith, and that means getting the good outcome for both girls.) Note that these are the scenes for sharing cake with them INDIVIDUALLY; nothing special happens if you share the cake with both of them together, so don’t get your hopes up. Make a save, choose either Cressa or Kyra, reload, then choose the other.

Page 2, Scene 5 (Aymee’s Story)
When in a dungeon cell with Aymee, choose the NSFW escape option. This may require having kissed her previously, I have not tested that.

Page 2, Scene 6 (Aymee’s Story)
This is what I did:
-There will be several points where you have the option to encourage Aymee to take a leadership role, or to stand up for herself. Always choose this option.
-Choose to kiss her when prompted (though the actual kiss comes later).
-When giving Aymee a compliment in the meadow, I chose “dedicated,” but I have not tested the other options.
-Do the nasty in the prison cell.
-If you got Cressa’s “good” ending, you should have access to TWO mages that you can call upon to provide help after leaving the dungeon. Ask them both.
You should then get the option for this scene at the very end of her story.

Page 3, Scenes 1-2 (Fayeth and Aurea’s Story)
I’m pretty sure the option to accept these 2 scenes comes up naturally, though Aurea’s may require that you take all of the options to be nice to her and spend time alone with her. But basically, both elves will straight-up proposition you. Just say yes.

Page 3, Scenes 3-4 (Fayeth and Aurea’s Story)
This is actually 2 different versions of the same scene, so you will have to make a save, get one version, and then reload to get the other. I’m pretty sure that as long as you do the previous 2 scenes, this event will trigger. Scene 3 is the one where Aurea drinks the D potion, and Scene 4 is the one where she doesn’t. The choice you make here does not seem to affect the good ending of the elves’ story. (Which, for the record, involves Aurea returning to her knightly order, and requires that you encourage her to extend an olive branch to them whenever the topic comes up.)

Page 3, Scene 5 (Main Story)
After the event where Trysta gives you a pile of mandatory reading to do, you will eventually have the option to kiss her. Do so, and follow every possible romantic option thereafter to unlock this scene. This is the last scene that triggers before the official endgame warning.

Page 3, Scene 6 (Main Story)
After Izumi takes you to her home, she will proposition you. I think this happens no matter what, but it’s possible you have to be non-confrontational and compassionate toward her in dialogue beforehand. Simply agree.

Page 4, Scene 1 (Main Story)
You are given two choices for how to get to the Afterworld. Choose the one that involves some in-n-out.

Page 4, Scene 2 (Main Story)
Caelis will proposition you in the Afterworld. Again, I haven’t tested whether this happens automatically, or if you have to accept the above scene and be overall nice to her, so do both of those things, just to be sure. When the proposition comes, agree.

Everything Else (Post-game)
Any girl who was present in Calsith for the final battle can be approached during the celebrations for some *ahem* alone time. Make sure Kyra comes with you during the prologue, and that Izumi comes with you during the endgame. Make sure you complete the other girls’ storylines, while romancing them and getting their good endings. (Cressa should have forsaken mugging and be staying with the local necromages; Aymee should be a now-confident leader; Aurea should have rejoined the Sacriknights.) I’m pretty sure Trysta only requires going through her previous romantic options, as she will be there leading the city’s defense no matter what. Fayeth and Aurea’s final scene has two versions again – one with D potion, one without – though they share the same spot in the Codex this time. You’ll have to save, get one version, and then reload to get the other.

These are the animated/voiced scenes that are not there for adult content. (Some of them do depict 2 people in the act, but it’s usually meant to be comedic, as opposed to “hot.”) Almost all of these will unlock automatically, provided you play all of the stories and unlock all of the adult scenes, so I won’t even bother mentioning those. However, for 3 of these scenes, there are 2 different variations that depend on previous choices you have made. This is where they are located in the gallery and how to unlock both versions:

Page 1, Scene 4
These 2 variations depend on whether or not Kyra is with you. To ensure that she isn’t, during the prologue, choose to sleep instead of staying up with Kyra, lie to your men about the Isenian counteroffer, and then lie to Kyra about your motivations for siding with Saterra. Play until unlocking this cutscene, then reload and do the opposite of the above (because you’ll miss out on a lot of other stuff if you don’t have Kyra).

Page 2, Scene 3
This scene depends on whether you or Cressa won the little quiz game, and really all it determines is which of you is the kisser and which of you is the kiss-ee. The correct answers are “Thelzite,” “Aulerity,” “Mapcairn,” and “The Grand Record.” Either get them all right or get at least half of them wrong, and then reload to do the reverse. (Note that the kiss can be refused altogether, regardless of quiz results, locking you out of BOTH versions of this scene.)

Page 3, Scene 1
This scene has a kissing version and a non-kissing version. For the latter, decline to kiss Aymee when the choice comes up, and then continue playing until this scene unlocks. Reload, agree to kiss her this time, and proceed with the game.

Again, most of these get unlocked just by playing – provided that you go through all of the girls’ stories – so I won’t include those. But I will list a few entries that have special unlock conditions.

Three are found from books:
1. The book on the table of the main character’s room (available after the prologue and Cressa’s story).
2. A book on the floor among the right-hand stacks of the library.
3. Same as above, except on the left-hand side.

And finally, during Cressa’s story, while you are quizzing each other, question 3 requires you to name a nearby town. The correct answer is Mapcairn, but all 4 answers provide a codex entry, so just reload until you have all of them. (The Bridwaith entry will also unlock while doing Aymee’s story, since you have to actually GO there. But I think the other entries MUST come from the quiz game.)

As far as I know, NONE of these will unlock unless you press the purple “MEMORY” prompt in the upper right corner of the screen when it appears. Assuming you do that every time, you will get the majority of these simply by playing the game in its entirety. Unfortunately, several memories are exclusive to characters’ bad paths, so if you want all the memories AND the best ending, you’re in for some save scumming.

Page 1, Memory 3
This will trigger if Kyra does NOT come with you during the prologue. Follow the steps for the Page 1, Scene 4 Cutscene, and you will have this.

Page 1, Memory 4
This is just there for flavor/comedy. When talking to the blue-haired market stall proprietor, exhaust every dialogue option, especially the one about her appearance.

Page 2, Memory 3
Page 2, Memory 5
Page 3, Memory 3
All of these come from making bad choices during Cressa’s Story, so you’re more or less required to make a save at the beginning of her story, do a “bad” run, reload, and then do a “good” run. For these memories to trigger, you have to steal the bread when prompted, refuse her advances whenever it comes up, do NOT tell her you have feelings for her when sitting under that tree, and encourage her criminality at every opportunity. Though I’m not sure it’s required, to be on the safe side, you might as well also decline to kiss her when prompted, tell her that you don’t like the gift she buys you, and have her continue job hunting without taking a break. After reloading, do the opposite of all of that. (This should also get you any other Cressa memories that you don’t have yet, though I think the rest of them do not depend on your choices.)

Page 4, Scenes 3-6
Not difficult to unlock at all, but I just wanted to note that these memories require exhausting ALL of Edric’s dialogue options when he’s training you in magic.

Everything else should pop by virtue of completing every individual story, getting the “good” ending thereof, and romancing the corresponding girl(s) while doing so. If you’ve done everything mentioned in every section of this guide and are still missing a memory, you probably missed one of the purple “memory” prompts. Thankfully, everything in every menu is listed in more-or-less chronological order, so you should be able to infer where you need to look for the missing entry.