This guide offers a range of general, useful information about the game, as well as various little tips & tricks I’ve learned along the way – to help you become more efficient and successfully fight off the nightmare hordes!

Some of the suggestions in this guide have been put together based on my own game play experience – for which I can comfortably play at Horrific level (currently playing through Nightmare).

There are of course ‘other’ play styles you can use to achieve victory, this is merely my own. Hopefully though you’ll learn a thing or two from this guide 🙂

Just reiterating that this is my specific way of playing AoD (which I can comfortably do at Horrific level) – there are of course other strategies that you can secure victory with, I am merely outlining my own, which I enjoy and find to be quite safe/effective.

As soon as the game starts, map out your immediate surroundings for ideal resource locations, some open areas which you can eventually place farms, identify any potential choke points for the first Death Night and so on.

The general goal is to upgrade your Keep as quickly as you can (with the imminently approaching Death Night), so once you’ve established your stone camp(s), you should hang on to enough gold/wood so you can upgrade as quickly as possible.

A choke point for this first wave can make life easier, but once you’re confident you can make do without one. For Easy -> Horrific difficulties, I found that 1 Ballista was all that was needed (alongside my hero and 7-10 Archers). There is also quite a lot of value to the ‘ignite walls‘ ability for this first wave, as it
A) naturally kills off a small portion of the overall wave and
B) buys your hero/archers & ballista time to pick off additional enemies.

I will typically place 4-6 lone tier-1 walls in a line towards my ballista (like breadcrumbs) and ignite them one by one as the wave begins hitting them.

So with that in mind, when you upgrade your keep for the first time, your research order should be:

Then afterwards you can go on to upgrade housing/farms, OR Tier-2 walls/gate if you feel they will be necessary for the defence.

At the beginning of the game I’ll typically explore the inner third of the map surrounding my keep, so that I’m able to scout out resource locations as well as reveal some nice open areas for which I can expand & place farms.

Once the first crystal/death night is revealed, I will move in that direction to identify the most suitable choke point (see section below for more info). After which I will continue exploring the outer edges of the map to A) locate gold mines and B) hopefully come across a dormant crystal, allowing me to identify a choke point and set up some initial defences early.

Starting out, I will have my original 2 Soldiers, and build up a force of up to 10 Archers to clear the map. Eventually when I’m able, I will gradually swap this force out for 10-15 Sentinels, backed up by 15-20 Arablests. It may seem like a lot, but this force allows me to:

I’ll also note that with this force, I don’t haven’t found a need to build siege units – though obviously they can have substantial defensive value with the right skill tree.

What about my starting units?
With the Archers/Soldiers I started out with, I’ll then use them in groups of two, to patrol my outlying farms/housing – protecting against the randomised nightmare spawns.

What my map clearing & defensive army will eventually look like.

A ‘choke point‘ is a narrow location that the nightmares will funnel through to get to your base. Below is an optimal example of a choke point, as well as how my defences against each crystal location will personally look, from Wave 5 onwards.

As mentioned above regarding ‘UNITS‘, I will typically have my hero and my army in close proximity to my defences during a death night. So, observing the adjacent pathway in the north-eastern corner, I will typically have my hero, sentinels and arablests formed here. To alleviate the pressure on my defences (if needed) – I will pick a tank-free moment to attack the wave with my hero, and lure them back to my army to create a ‘break’ in the attack. This results in a decent portion of the overall attack wave being redirected and safely dispatched.

Creating this ‘break’ in the attack also allows me to briefly repair my walls if needed (as mentioned in the ‘Tips‘ section).

Lastly, I just thought I’d mention that depending on the width of the choke point you’re forced to work with, you may need to set up a secondary set of defences closer to your base, for the Final Stand. For example in the below image, I could do so in the northern section, between the two cliffs. 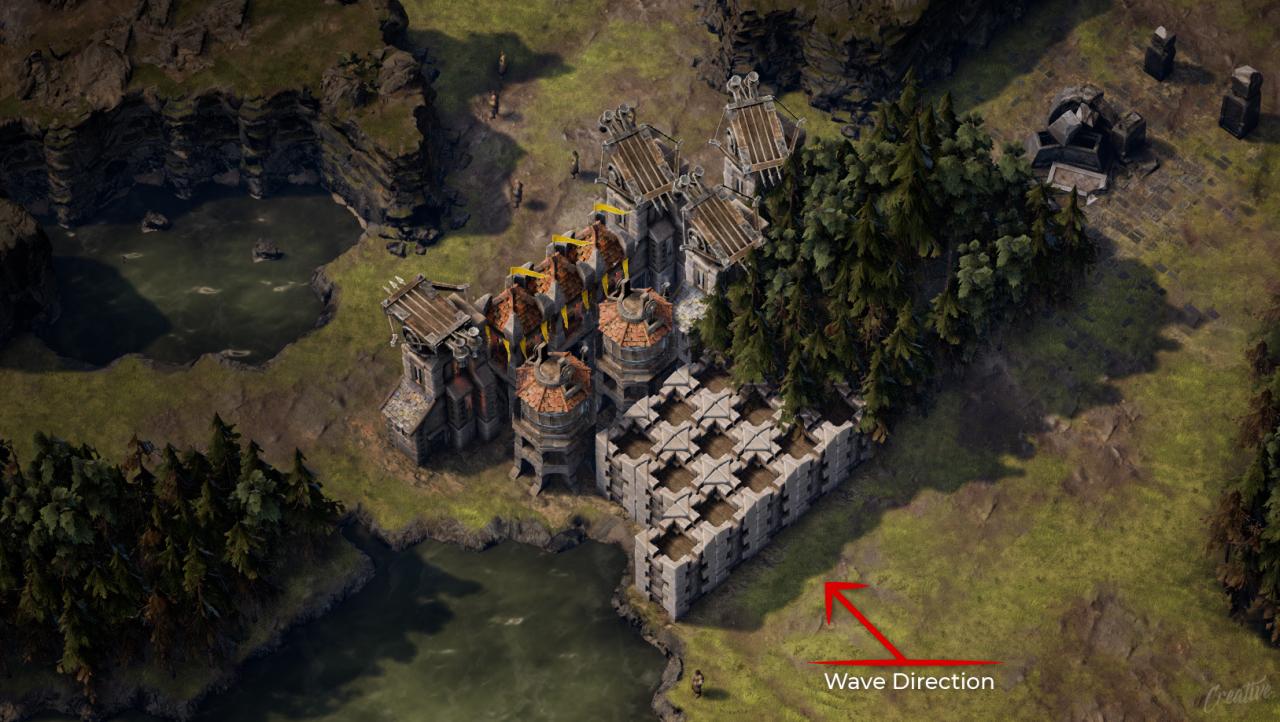 Below is a shot of my preferred tree upgrades. I opt to run an army comprised of Sentinels & Arablests (both for map clear & defence) so the general reasoning for my below build is as follows –

Sentinels are designed to soak as many hits as possible, so committing to the ‘Stability’ column is only logical, and Wolf Blade reflects damage back at the enemy – which adds a nice bit of lethality to them.

With such a solid front line (the Sentinels), I feel its best to compliment that with high-damage Arablests. ‘Fire Arrows‘ are great at assisting with map clearing, while ‘Critical Cover is considerably better suited for Death Nights, specifically with taking down the ‘tank’ Nightmares.

Personally, I haven’t found a need for siege units – my army gets the job done quite well without. However, the siege units in this game are designed to disrupt the momentum of groups of enemies, which is why in my testing, I found committing to the ‘Ironworks‘ column and investing in ‘Concussive Shot‘ to be the most beneficial at kneecapping a Death Night wave. 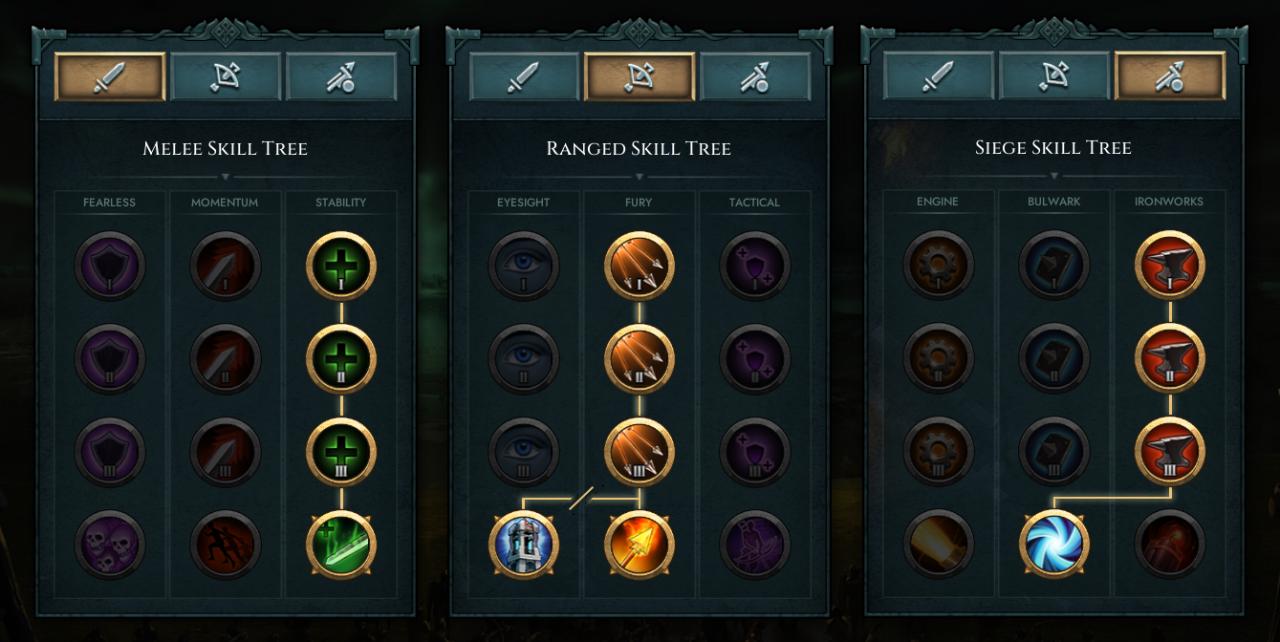 There are a few differences between the difficulties as they get harder, being:

Regarding the ‘increased nightmares during death nights‘ point, the below numbers show the number of spawns there are per wave & difficulty, so you have an idea of what to expect and can better prepare your defence.

I’m not sure if these numbers are exactly the same for each player, but these are the numbers I personally dealt with in each difficulty.

Below is a list of the current blessings in game which I’ve ordered according to how useful I perceive them to be in game.

1. Day Break
All units gain 25% towards Emboldenment at the start of each new day.

‘Emboldened ‘ units are immune to horror and gain a 10% hp, 25% damage boost. This is a fantastic, passive blessing which will quickly strengthen new units you create, allowing you to more effectively explore & clear the map.

2. Encouraged
Emboldened Units have a 10% chance to deal double damage.

3. Night Watch
Enemies slain during Night Time have a chance to drop resources.

Quite a profitable blessing for when death nights come around. Make sure you’re not at/near your resource cap before picking these drops up.

Obviously works quite well with the Night Watch blessing, though still viable on its own.

Although this blessing doesn’t apply to the skill tree upgrades, units, researches etc – it will still save you you a considerable amount of resources throughout the game – allowing you to strengthen your defences further.

6. Two For One
15% chance to gain two units for every unit trained at the Training Hall.

A pretty simple blessing, but one that help bring about an established army sooner (and save a little on resources in the process).

This speed boost won’t be enough to react to imminent problems in time, but generally speaking every little will help, and this blessing will help speed up the expansion of your base (provided you have optimal resource rates).

Helps light up the map and reduce the amount of light towers needed, allowing you to refocus your resources. This will mean you’ll likely have a reduced amount of areas that offer the removal of the horror debuff – though this is not an issue if you’ve prioritised the top two blessings in this list.

9. Rigged Defences
Buildings destroyed by Nightmares have a 60% chance to inflict AoE damage to enemies.

This blessing can be handy for the 4th Death Night onwards, when you will inevitably lose some walls/defences to the nightmares. If they’re going to destroy some of your structures, may as well make them pay for it.

I personally don’t like having units in the thick of things if they are operating on such low health, so I would sooner pull them from the fight, until they (quickly) regenerate their HP, making this blessing fairly redundant.

11. Nightmare Fuel
Units fully heal when they are horrified.

With the first two blessings at the top of this list selected, the high majority of your units will be emboldened & immune to horror, making this blessing fairly redundant and have very low impact.

In my opinion, the only Dark Crystal worth getting a days’ notice on would be the first one (which obviously isn’t possible) – since you’re working quickly to establish resources and your base.. So this blessing is reasonably pointless.

Other –
I believe there’s also a blessing to double the XP your hero receives. I would place prioritise this after ’10. Last Stand’ – provided your hero doesn’t die more than once, you’ll get to level 10 before the Final Stand (assuming high participation with the hero), and the hero simply doesn’t impact the game to a degree that warrants being higher up this list.

Below is just a quick list of tips & tricks I thought would aid your playthrough, though some will be obvious to you.

I thought it beneficial to have a general idea of how often your resources are coming in.

At the beginning of the game, gold will replenish every 24 seconds. However, seemingly as you upgrade your keep, this will slow down to 34 seconds.

Gold harvested from refined quarries will replenish every 90 seconds, and are tracked separately from your Keep/Housing income.

Lumber Yards have no refined version, so they replenish every 50 seconds at all stages of the game.

Stone will replenish from refined quarries every 55 seconds (~65s for unrefined).

Iron will replenish from refined quarries every 75 seconds – a little slower than that for unrefined.