When the game starts you can’t really do much fighting. You can only attack with tools, and these do little damage. The first thing you want to do is unlock ‘Basic Combat’ research. This is available upon reaching Tier 1. It requires 2 logs and 2 stone to research.

Basic Combat rewards you with 2 things: Combat Mode and a Weapon

Go into your character screen (C) and click on the Weapon in your inventory to equip it. The weapon you receive is random, so each game you can end up with a different one.

Next press ‘Q’ to enter Combat Mode. In this mode your number keys are replaced with combat skills instead of your normal item selection. Left and Right click also become your basic attacks. Right Click starts out as your default weapon attack. Left Click becomes Elemental Bolt if you have any items with Elemental Power equipped.

Pressing ‘Tab’ in combat mode focuses on the nearest/next enemy and allows you to strafe around them. Additionally your attacks will auto aim in their direction. A Health Bar will appear at the top of the screen showing you how much health the enemy has remaining. Pressing ‘Q’ in Combat Mode will exit and return you to normal gameplay

One of the most important aspects of Combat in Ficterra is Equipment. You can wear certain items to increases the stats of your character making better at combat.

Characters have 10 equipment slots that can each equipment their own type of item. These slots are: 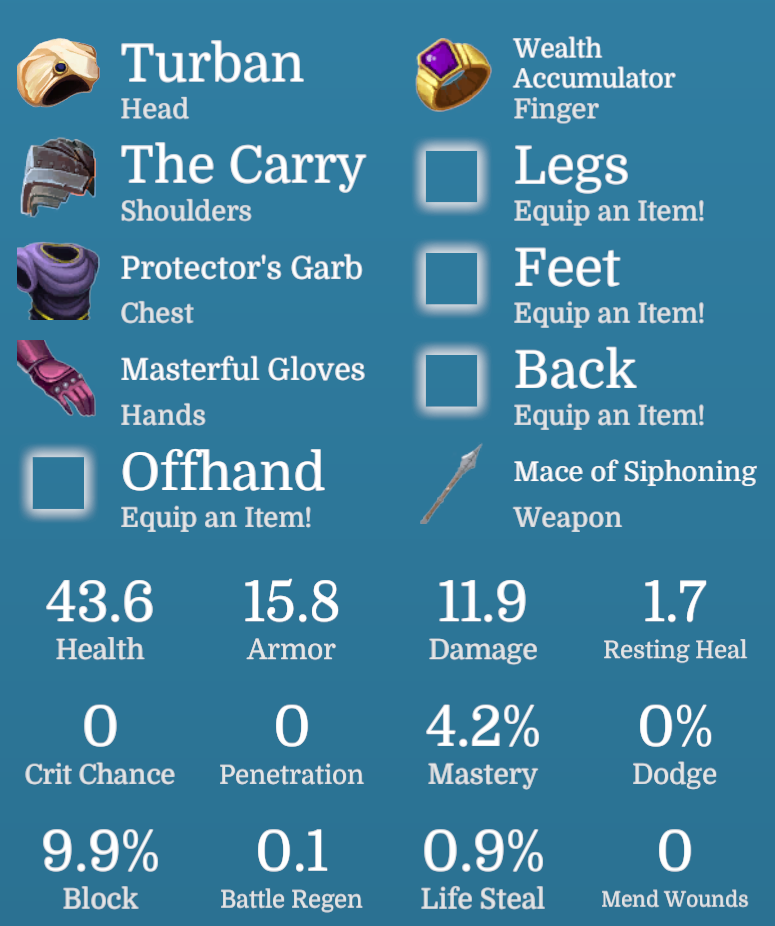 The Back and Offhand slots are mainly used for non-combat purposes so this guide will focus on the other 8.

Each piece of equipment gives a ‘Main Stat’ determined by its slot.

Every piece of equipment also has a Power Level. This affects the overall power of all stats on the item. Items with higher power levels can be found in Dungeons. The section on Item Affixes will go into depth on the individual stats (or affixes) on items.

Equipment also has different Rarities. These follow the same rarities as other systems in the game: Common, Rare, Epic, Mythic. 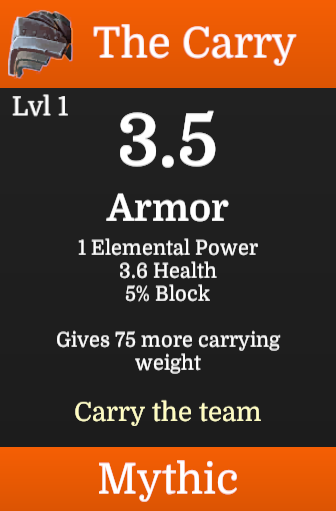 Equipment can be obtained in a number of ways.

There are 3 primary affixes, 9 secondary affixes and a number of Mythic Affixes that can appear on items. When items roll their affixes they pick from a pool based on their equipment slot. If they can roll more than one secondary affix it chooses from the remaining affixes in the pool. This means you can’t roll the same affix twice on the same item. This section goes over the primary and secondary affixes, some examples of Mythic affixes are shown later.

Elemental Power is a special affix that gives your character new skills. All items of rarity ‘Rare’ or higher automatically come with this affix. Every Elemental Power you gain up to 6 gives a new skill. The skills are more powerful and/or versatile than the default attack, so its good to get at least 6 pieces of equipment that are Rare or better.

The skills granted by Elemental Power are 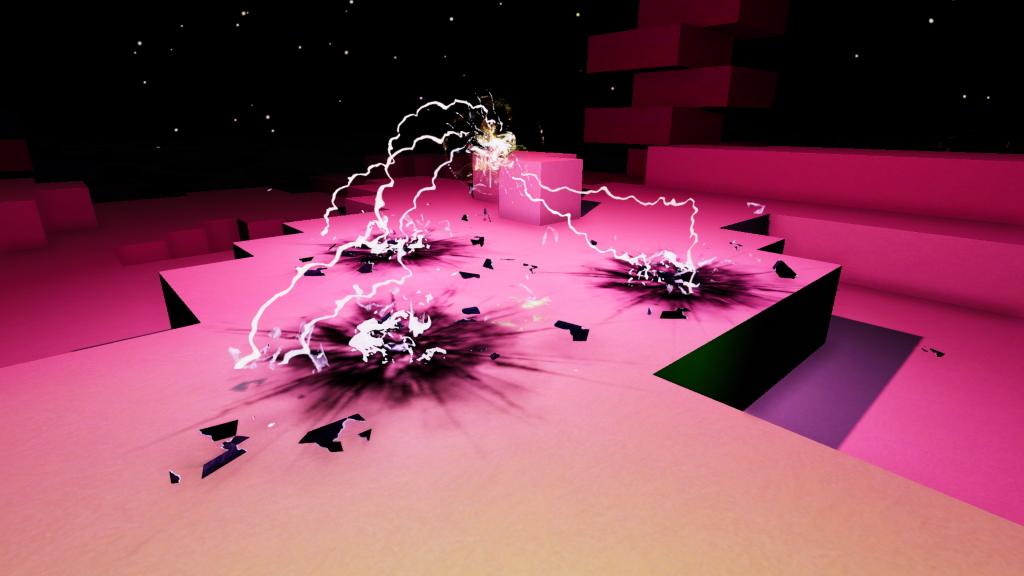 There are a variety of enemies you’ll come across in Ficterra. We are going to talk about general strategies from fighting them and specifically talk about some of the more unique enemies. 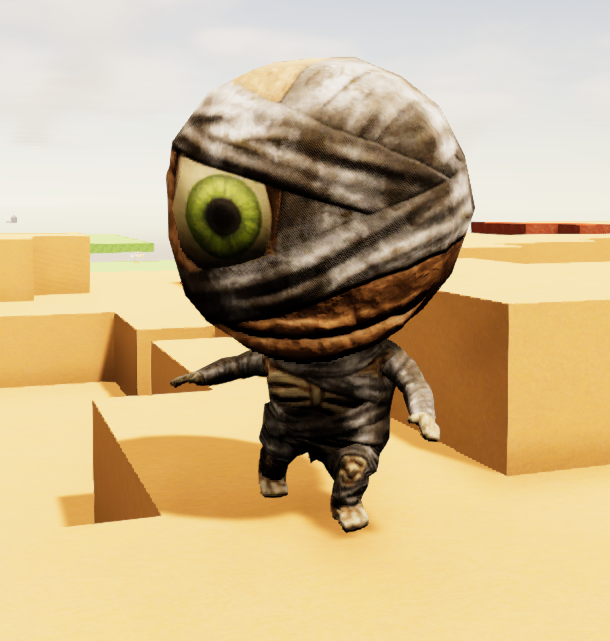 A general strategy for combat with Elemental Power is to open with a Elemental Bolt and than cast Ice Blast to freeze them in place. Continue to cast bolt until they get closer then unleash your other elemental attacks. Try use all four of your element skills to get your bolt to upgrade to Elemental Blast for 4 times the damage. Use your heal if you think you might be in danger of dying. You can distance yourself and repeat this strategy until you have won.

Different enemies have different resistances, so trying out different element attacks can help you learn which are the most effective.

Flying enemies, such as Rockies, Bats or Dragon Whelps are going to be tougher to hit with ground based attacks like Lightning Ball and Fissure. Backing up might cause them to follow you more horizontally over the terrain, allowing them to get in range of these attacks.

Grumpy Bombs explode if you leave them at a low health. So you want to finish them quickly from below 50% health. Their explosion is also centered around them, so keep yourself at distance.

Golems are large slow enemies that deal a lot of damage. Use Ice Blast to slow them down even more. Attacks these from afar, it is probably not worth getting in close for your elemental attacks, unless you have a lot of survivability.

Jack-O’-Lanterns don’t even move, so Ice Blast is less useful. They are also only have ranged attack, so keeping them away from you doesn’t do much. You can close the gap and use all your area abilities on them, since they won’t move out of the area. Watch out, since at a distance these can look identical to normal pumpkins.

Bears are dangerous beasts, so if you fight them take care. They don’t require a different strategy, but they more tough than most enemies you’ll encounter

Werewolves are a Boss Monster that is very dangerous. They move much faster than most enemies and deal more damage. They can jump large distances to reach you. The most dangerous attack they have is their Howl. The howl causes you to tremble in fear for a few seconds, disabling you from moving or attacking. You don’t want to be on low health during the howl, because you won’t be able to heal, and the werewolf can just finish you off. Use Ice Blast to slow them down, and use your area effects if the Werewolf is near, so if you get howled, it can deal damage over time when you are incapacitated. 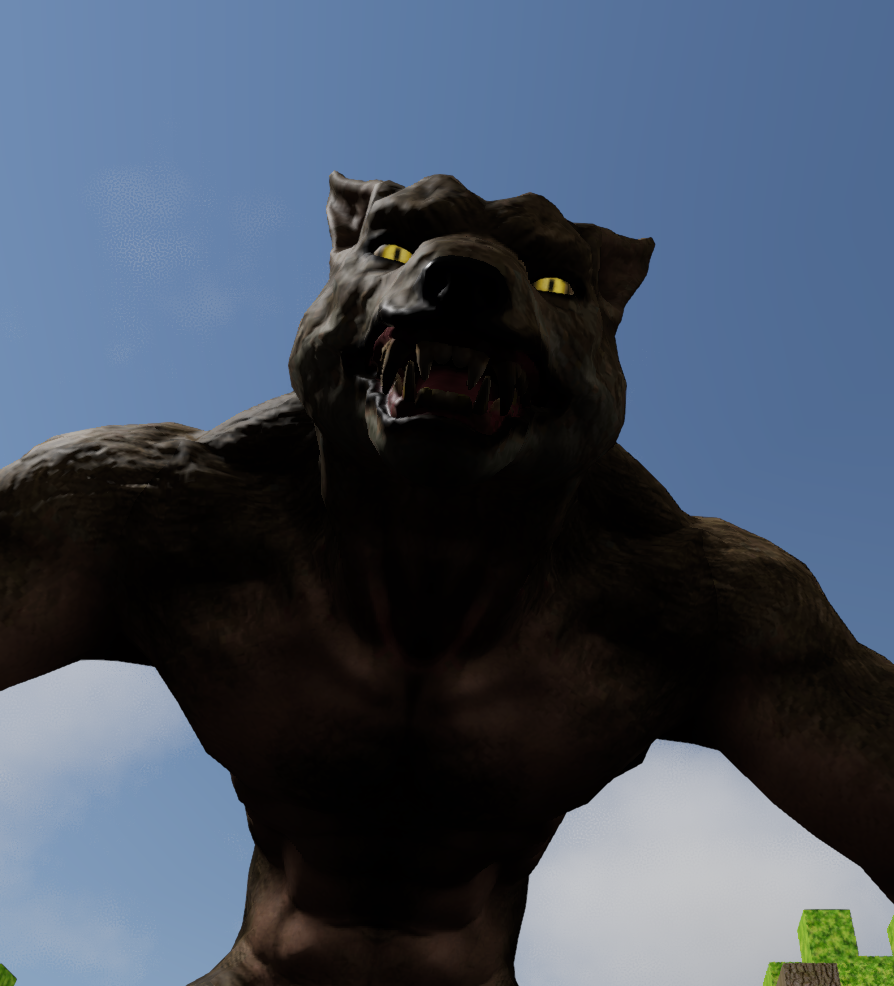 The other Boss monster is the Imperial Commander in Marble Town. This is another powerful enemy, but he moves and fights more like normal enemies. His signature move is Holy Burst which blasts you with electric and fire damage and then slows you for 4 seconds. This skill has incredible range, so your likely to get hit with this trying to run away. It does however have a minimum range, so if you are fighting close to the commander he will be unable to use this move.

In addition some monsters have been ‘upgraded’ to boss status. These are just like their normal counterparts except they do more damage, have more health, and drop better loot.

Dungeons are special areas designed for fighting more difficult enemies (and getting better loot). Dungeons are accessed through Portals. You can craft portals after researching Basic Combat, with Stone and a Portal Focus. At the portal you can use Portal Focus items to open portals to a dungeon. Only one portal can be open at a time, opening a new portal will close the previous portal and dungeon. 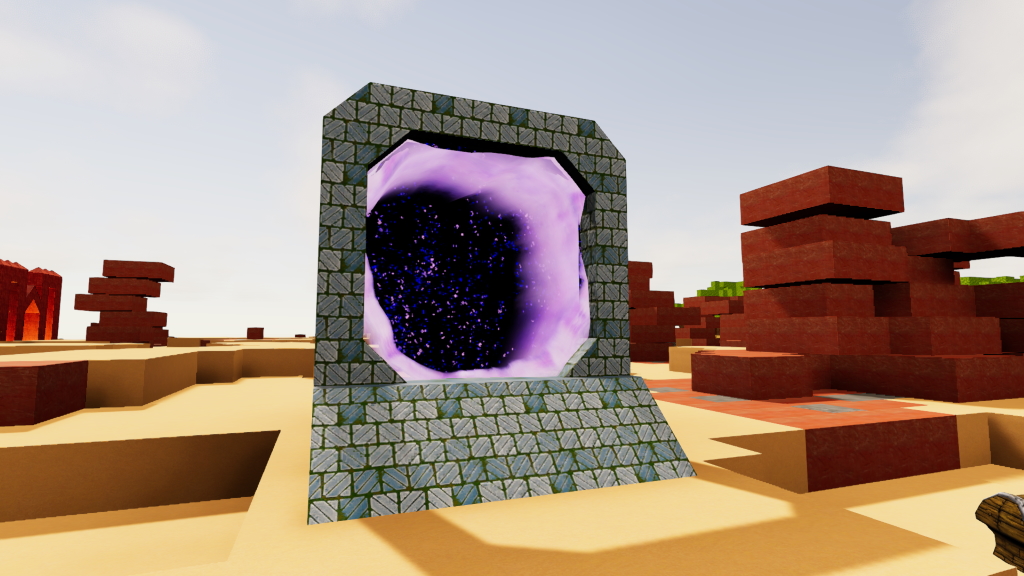 There are currently 2 dungeons in Ficterra: The Beetle Caves and The Marble Halls

The Beetle caves is the first dungeon and is lower level. It is highly recommended that you do the dungeons in order. Trying the second dungeon with world gear will be very challenging. The dungeons drop higher level gear, so gear from the Beetle Caves will help you take on The Marble Halls. 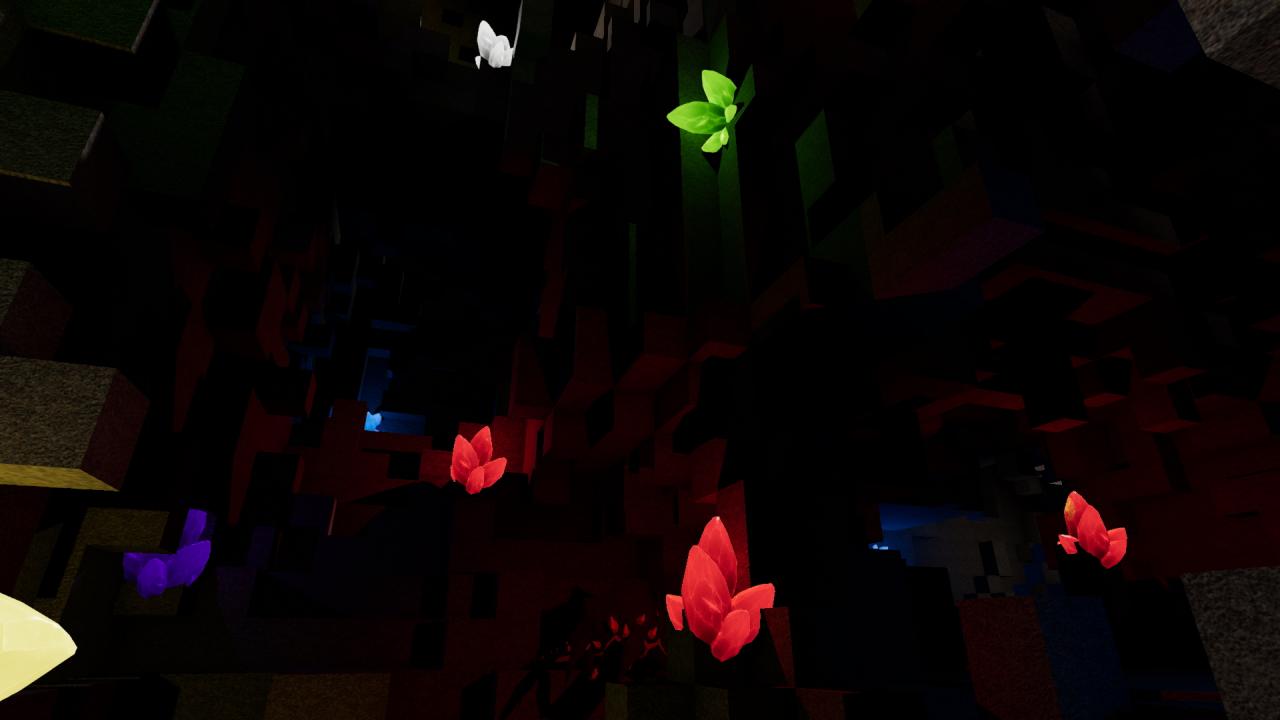 The Beetle Caves is a network of caves filled with Beetle enemies and glowing crystals. The Beetles come in 3 types: Acid, Electric and Fire. All types will attack with their horn and attempt to chase you down. The Fire beetles launch a ball of fire, the Acid beetles launch a ball of acid, and the Electric beetles let out a bunch of electric charges in multiple directions. Similar strategies apply as to normal monsters, but dodging their projectiles is important to minimizing the damage you take. They are also smarter than most monsters so they have better tactics. The boss Beetle employs all three of the other beetle’s skills to take you down. Watch out to see which attack they are using to dodge correctly.

The Marble Halls is the second dungeon and pits you against the Imperial Army. Imperial Slayers are a dangerous foe with a variety of high damaging melee attacks. Take these enemies on one by one and use Ice Blast and distancing to avoid getting hit. There is an optional golem boss you can fight in the dungeon, if you want more loot. The final boss is a boss version of the Imperial Commander and several Slayers. Try to take out one enemy quickly to reduce the incoming damage. You can’t run from Holy Burst, and it slows you down, so dodging attacks from both Slayers will be more difficult. You can try to group up the enemies in an area and use your AOE attacks to hit all of them at once. 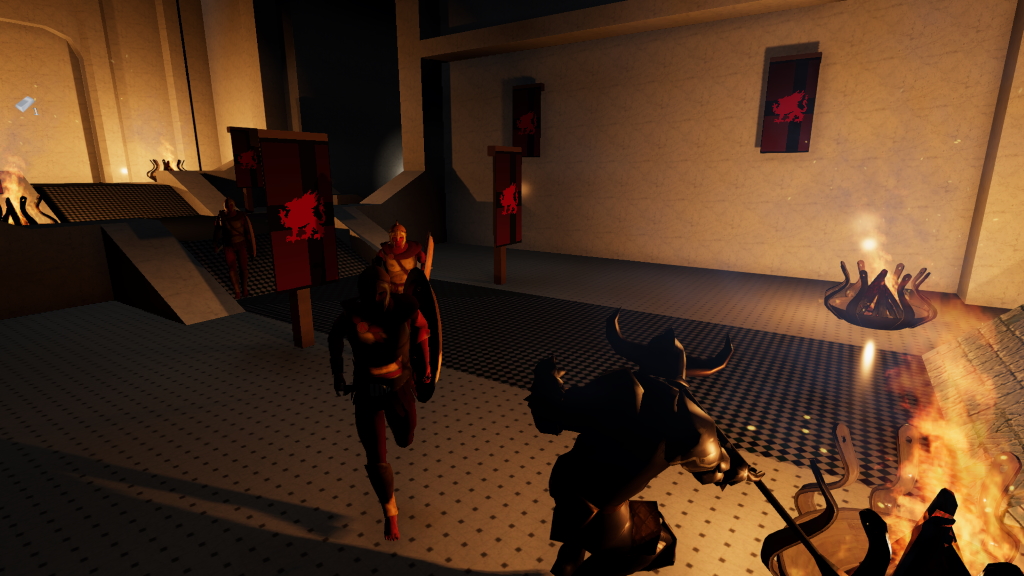