This guide describes creating your own challenge in Editor.

If you want to create your own challenge, there is such possibility in the game. Let’s look at the basic functionality of Challenge Editor. Currently, it’s in Beta, so this information is subject to change in the future. 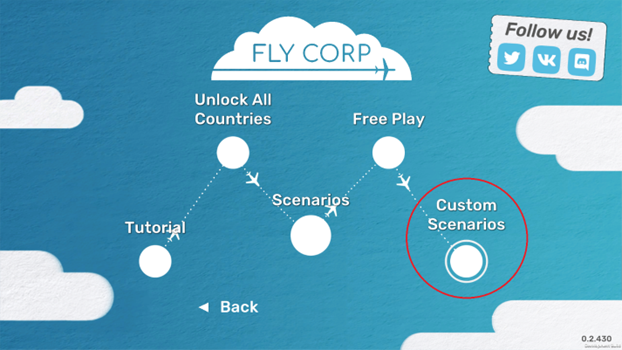 The list of all challenges will open. Here, press “+”: 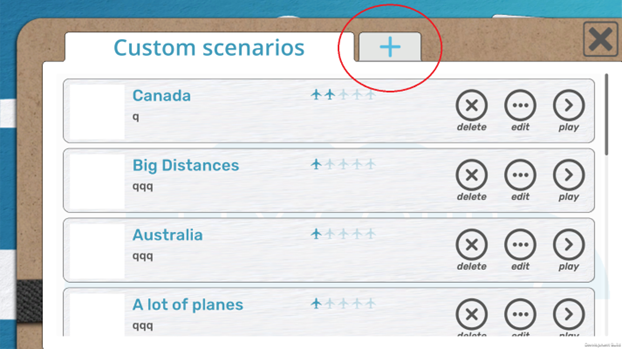 And here is the Challenge Editor.

Challenge Editor has 4 tabs with different functions on each. 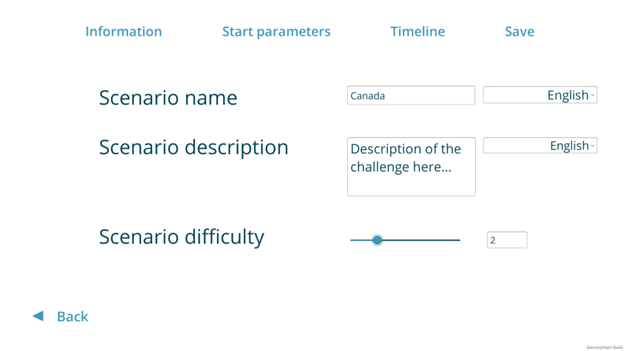 Interface is still in a very early state.
In the first tab, enter the name of your scenario, brief description, and difficulty (these fields are mandatory).
What’s interesting is that you can enter text on not only Russian or English, but on any language supported by the game. The necessary language will be shown according to player’s language settings.
The second tab is much more complicated and contains many important parameters which determine what happens in the challenge. 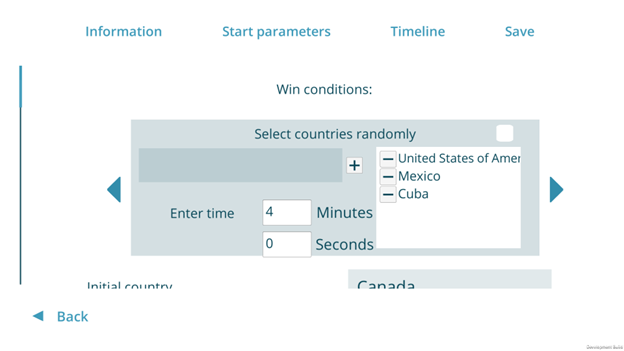 The first thing we need to do is to set victory condition. For example, we can set the goal to unlock a list of countries, one after another. We’ll need to unlock a new country every 4 minutes. Let’s set the first country to be Canada. Here, you can also set how players will unlock new countries (forbid unlocking new countries, allow unlocking any countries, only allow bordering countries to be unlocked). Also, let’s set the initial balance: $3500 will be enough to connect the first cities, upgrade a plane or launch a couple of new ones. 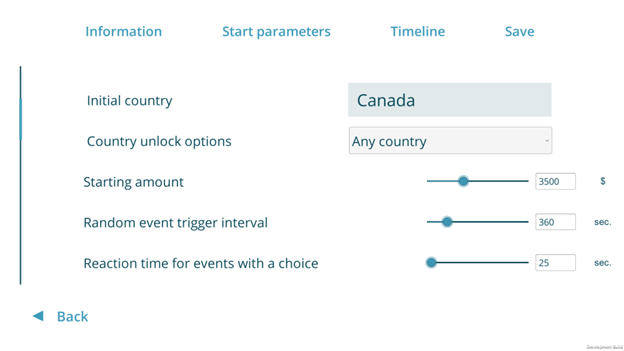 From time to time, random events can occur in the game, affecting the gameplay. Here you can choose how often they will occur or disable them fully. Please note that some events can’t occur earlier than some events in the game. The main condition here is the number of unlocked countries. We’ll add the information regarding limitations for events later.
Also, you can set the minimum population of an unlocked city. If population of the city is lower than this number, it won’t unlock in the challenge. 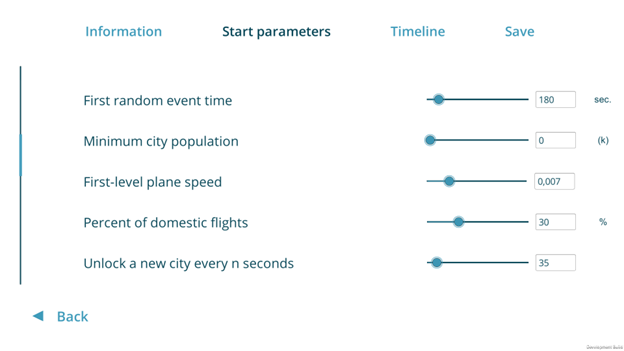 We can change the speed of first-level plane (but we can make a very fast-paced scenario using this slider).
The percent of domestic flights determines how many passengers will only fly in their own country.
Let’s set the interval between unlocking new cities (they will be chosen randomly).
Next, we see the thing that is hidden from players’ eyes: passenger flow produced by a city becomes bigger over time. The array determines seconds. After this time, passenger flow is doubled. Because cities are unlocked gradually, general passenger flow grows very fluently. 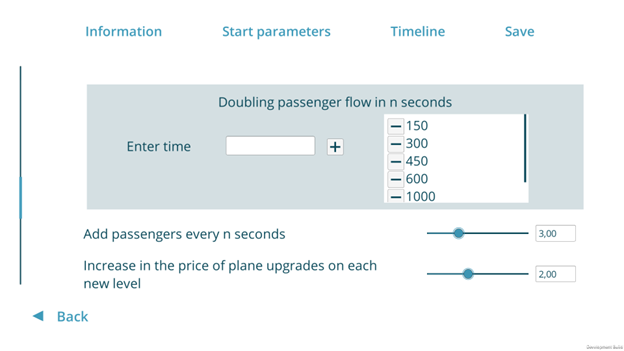 Here you can set how frequently passengers will spawn at airports (by default, it’s each 3,5 seconds).
Parameters below are easy to understand without talking about them, so let’s move on to the next tab.
This is timeline – events that will occur in the scenario. 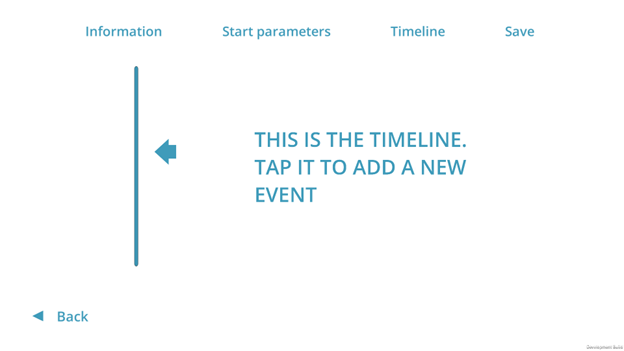 Let’s create the first event: unlock a city on the fourth minute. Population of a city is put into braces – it affects passenger flow from and to that city. Also, if you need to choose a city and there are two cities with identical name, you can find the necessary one using its population. 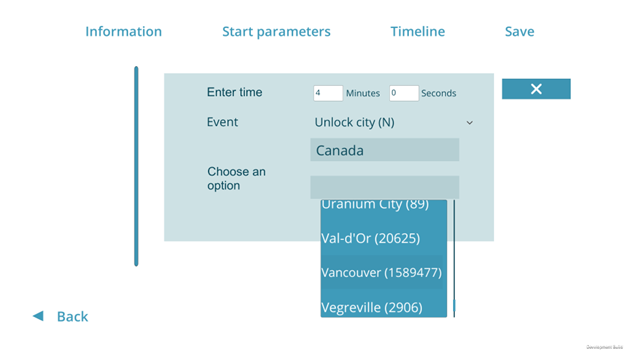 Let’s add some more events. By the way, you can edit them by clicking on the event on Timeline. 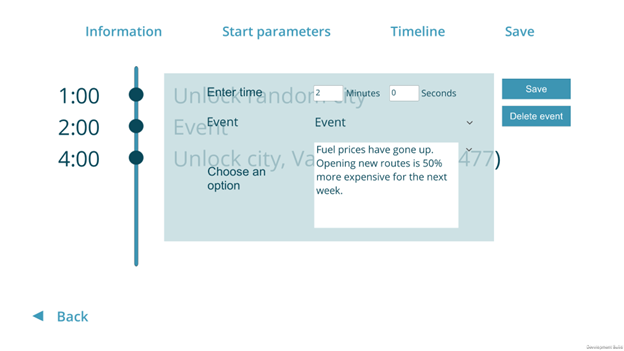 Let’s make our custom event! We’ll make the player pay taxes on the 8th minute.
To do this, we’ll add actions “subtract money” and “show message” (the players need to know why their money was taken away). 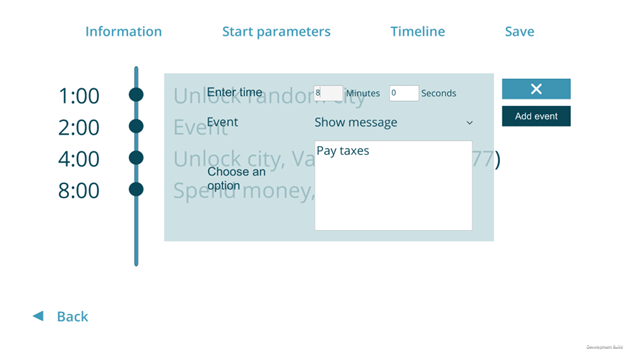 As one more sample, let’s choose one of pre-made events. For example, a review by a popular urban blogger will increase passenger flow in a city. The player will have to react on it. The city will be chosen randomly. 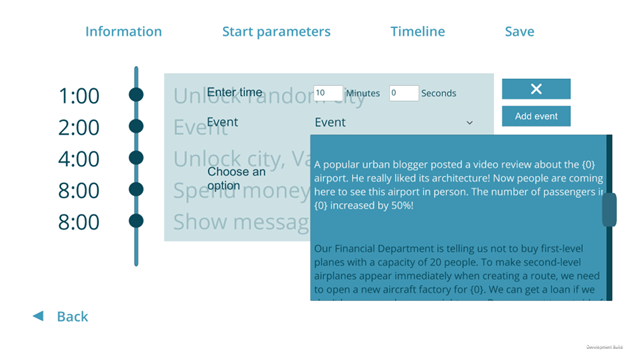 Finally, let’s set the name of the file. Done, let’s go and see what we got. 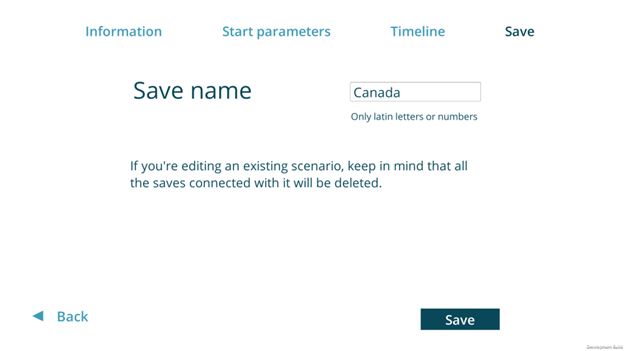 Now we can get back to Scenarios screen and see this challenge there. You can edit or delete it at any time. To create a balanced scenario, you’ll need to go to play mode and check it out, make necessary fixes and repeat. 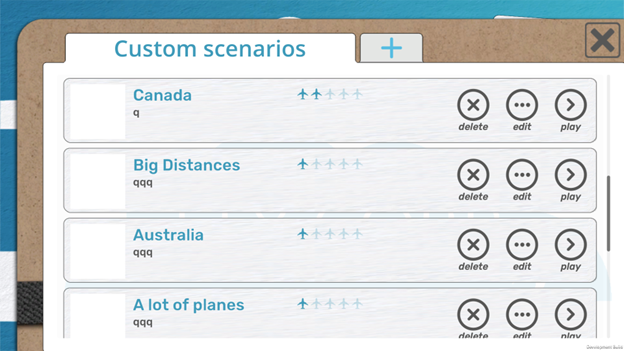