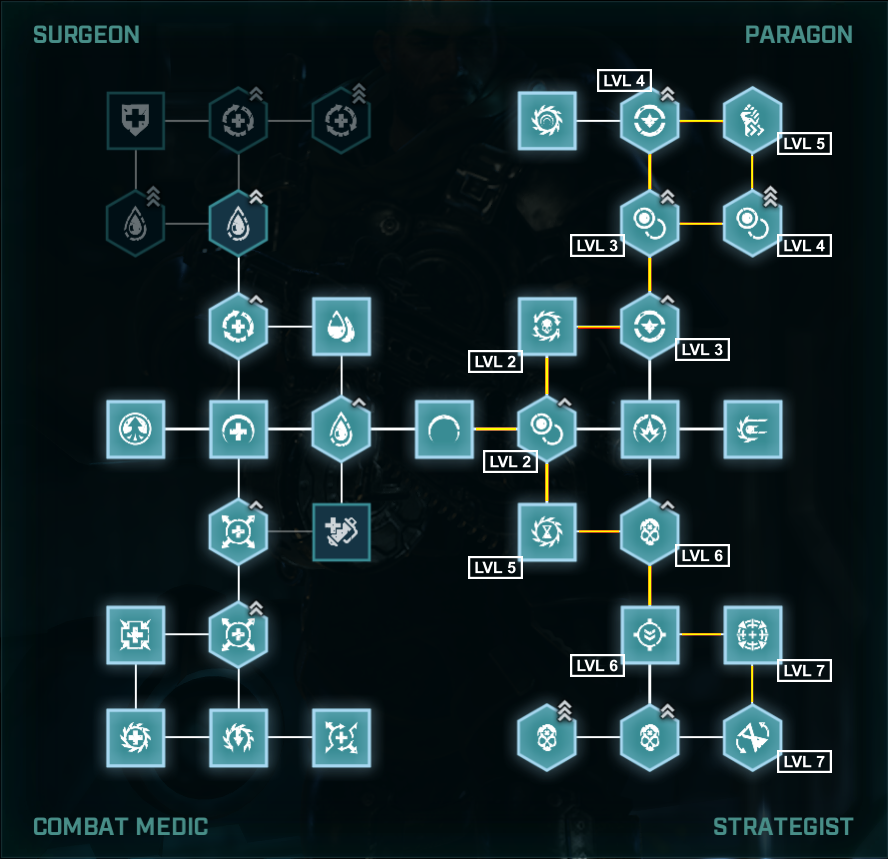 The Support class is a force multiplier for any squad due to its Paragon skill tree, which gives it access to skills like Empower, Teamwork, and Lock & Load.

This is also the only skill tree, which has any worthwhile investment on higher difficulties. Healing skills & passives have severely reduced value when enemies can essentially one-shot you. It’s usually a better idea to clear out enemy waves quickly rather than extending the firefight by healing. Thus, the Surgeon and Combat Medic trees can be safely disregarded.

The recommended skill progression is to immediately work towards Empowered (LV3) and Teamwork (LV2). This will provide you free AP for you and your allied units nearly every turn, especially when paired with equipment mods that reduce or refresh cooldowns. Afterwards, you should progress towards the Surge skill in the Strategist tree to provide further opportunities for AP gain.

In short, a Support’s role is to spam Empowered and Teamwork to ensure that your damage dealers, like Scouts and Snipers, can clean up enemy waves by themselves.

For your gear & weapon mods, you should prioritize cooldown reduction, refresh, and AP gain. 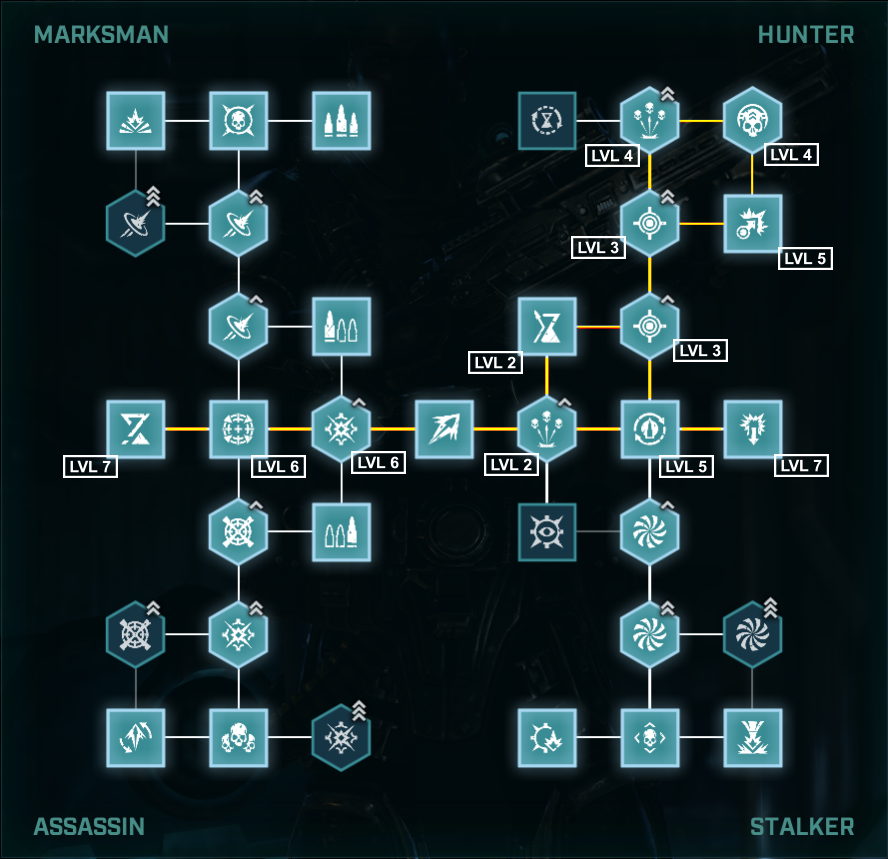 The Sniper class can single-handedly decimate waves of enemies. They use their skills to chain together kills that in turn refresh the skills! It is recommended that you heavily spec into the Hunter tree as the more Action Points you can generate the better. The skills you want to prioritize are Second Chance, Fast Fingers (LV2), Chain Shot (LV2), Ultimate Shot. This provides your Sniper a plethora of AP and opportunities to mitigate any shot RNG as well.

Most encounters will begin with your Sniper using Chain Shot to initiate, Fast Fingers when you run low on ammunition (note that Fast Fingers can proc Active Reload if it’s the final bullet), and Ultimate Shot whenever you run low on AP. Additionally, Second Chance ensures that any untimely misses allow you to retry a skill at least once. Furthermore, combining the Support class’ Empower and Teamwork will allow your Sniper to continue popping heads as needed.

For your gear & weapon mods, you should prioritize cooldown reduction, refresh, and magazine size. 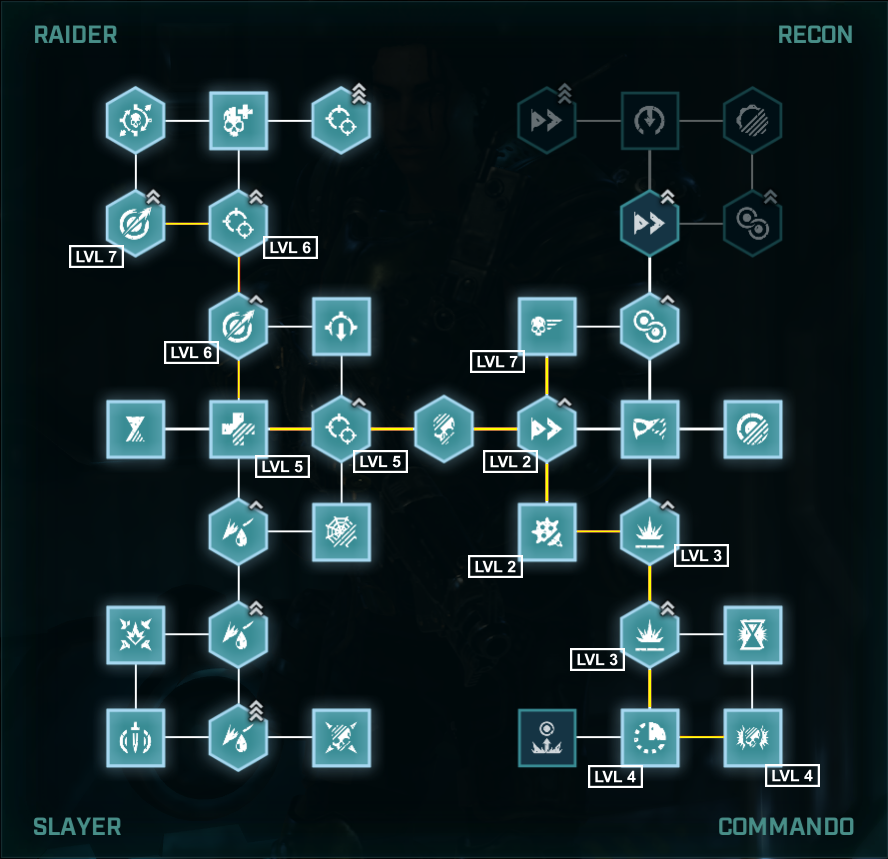 The Scout class is arguably the strongest unit in the game. It has the capability to solo any mission with ease if you have the necessary equipment mods (mainly the entire UIR armor set). This is solely due to the class’ access to consistent frag grenades. Frags are by far the most powerful weapon in your arsenal as they have 100% accuracy, deal major AOE damage, interrupt enemy overwatch & pins, and knock targets out of cover.

Although, a frag-oriented build means that only the Commando tree is viable as any gnasher-related skill trees are lackluster in comparison. You should prioritize Frag Grenade Mastery and Proximity Mine LV2 to maximize your explosive capabilities. Additionally, look to pick up the Exertion LV2 skill node for the free 2 AP gain (the health cost is negligible).

A high level Scout will be able to run around the map gibbing enemies with buffed frags and cloaking out of any dangerous situations; all in a single turn!

For your gear & weapon mods, you should prioritize grenade cooldown reduction, refresh, and other grenade-related buffs. 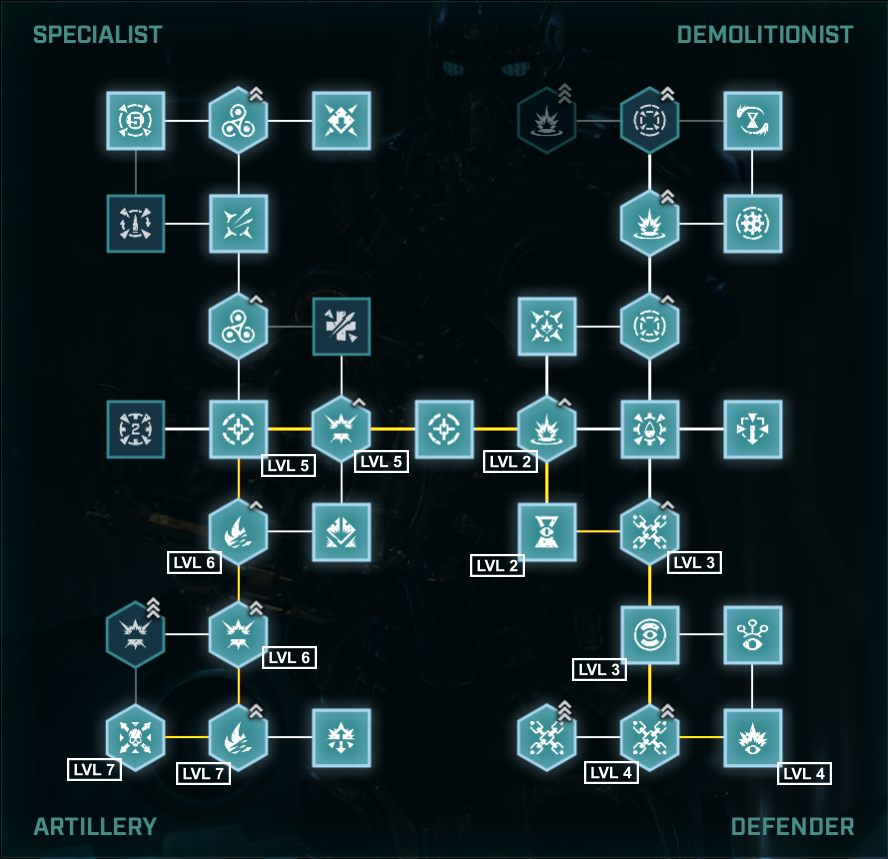 The Heavy class excels for specific requirements but is relatively lackluster in every other situation. The most effective usage for the Heavy is as a “Overwatch Bot”, which means you will invest heavily into the Defender tree for skills like At the Ready, Suppressing Fire, Quick Overwatch, and Slayer. All of these abilities enhance your Overwatch ability. Eventually, you’ll look to grab Enhanced Anchor, Heat Up, and Ultrashot as they do provide an overall projected damage increase.

The Heavy’s high projected damage is balanced by its low accuracy, which is why Overwatch is such a critical component of its effective use. This also means that the Heavy is relegated to basically just Control missions as they can successfully hold down a point with their massive mag size and zone control. Missions that require high mobility and relocation prevent the Heavy from gaining Anchor stacks and making use of its Overwatch choke points.

All in all, the Heavy is definitely one of the stronger classes but ultimately with limited viability in most situations.

For your gear & weapon mods, you should prioritize Overwatch buffs, AP generation, and magazine size. 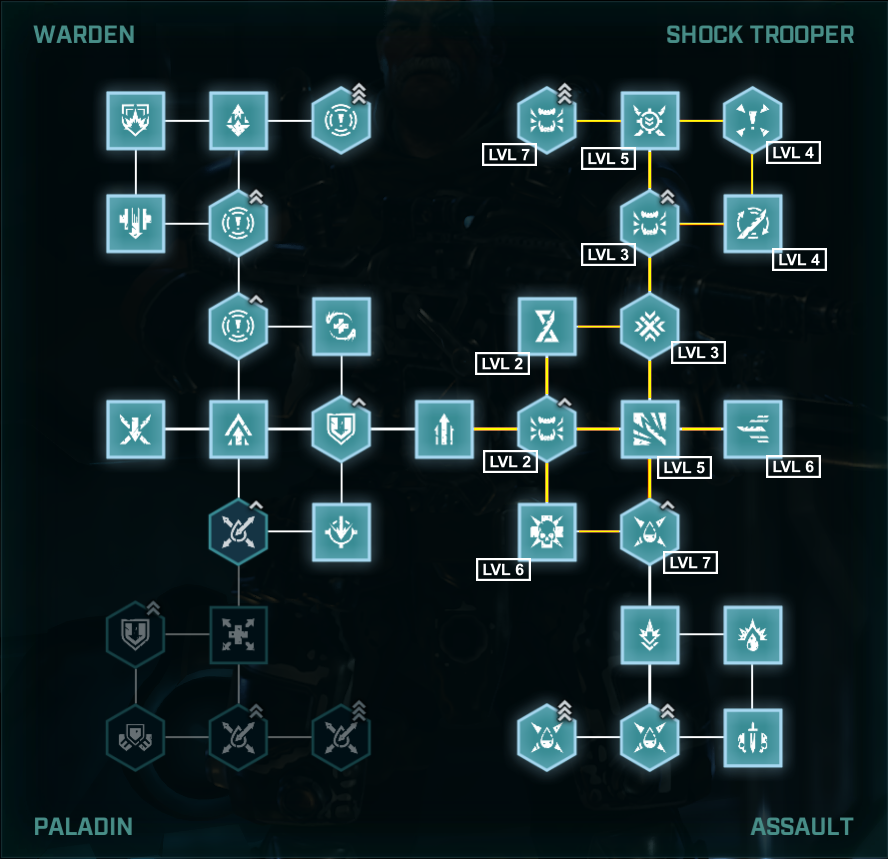 The Vanguard class is regrettably the weakest unit type in the game. It’s true that the projected damage output of the class is comparable to the Sniper but its non-existent effective range reduces the consistency significantly and a misfire usually means an immediate death. Indeed the Vanguard is supposed to act as a close-range tank unit; shrugging off hits and doling out punishment. But on higher difficulties, the hefty damage reduction really only turns that one-shot into a two or three-shot death.

Nonetheless, speccing into the Shock Trooper tree for Bayonet-related skills, Intimidate, and Breach makes for a sometimes useful unit. If your Vanguard survives the initial crossfire, they’ll definitely be able to return the welcome or at least allow your other squad members to mop up.

For your gear & weapon mods, you should prioritize cooldown reduction, refresh, and Crit-related buffs. 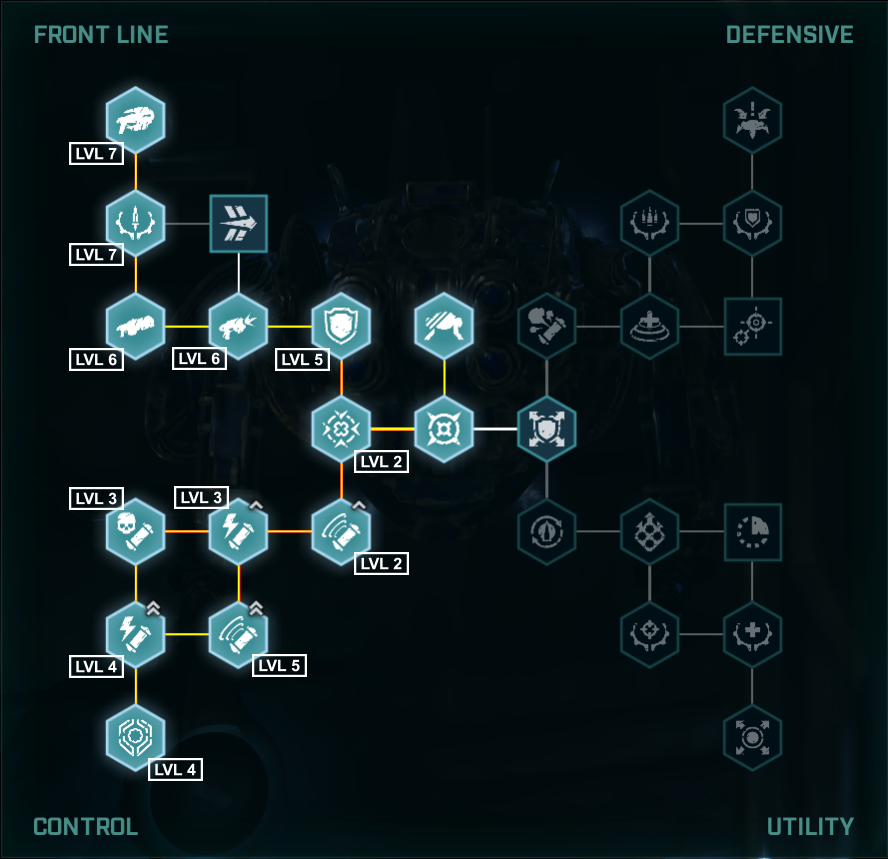 Jack is a unique “class”, being the only robotic unit in the game. As such, they play entirely different than any other unit as well.

In my opinion, Jack’s most useful ability is to Cloak and zoom around the map collecting loot boxes, scouting, or triggering interactables. Basically, you get a free unit that does all the busy work so your squad can deal with the enemies.

However, they can provide offensive capabilities through the Control tree, which allows you to shoot capsules to shock, poison, or debuff enemies. Additionally, Hijack is a powerful, albeit high cooldown, skill that lets you control an enemy to fight for you. It’s always fun to have an opportunity to play as an enemy unit and it can turn the tide for any outnumbered situations.

Although it’s overkill, I do wish that Jack’s Explosive Hijack ability from Gears 5 was included but I fully admit that it would be an unnecessary power-creep addition.

Jack can also spawn reduced-ammo boomshots and torque bows for your units, which is just icing on the overpowered cake. 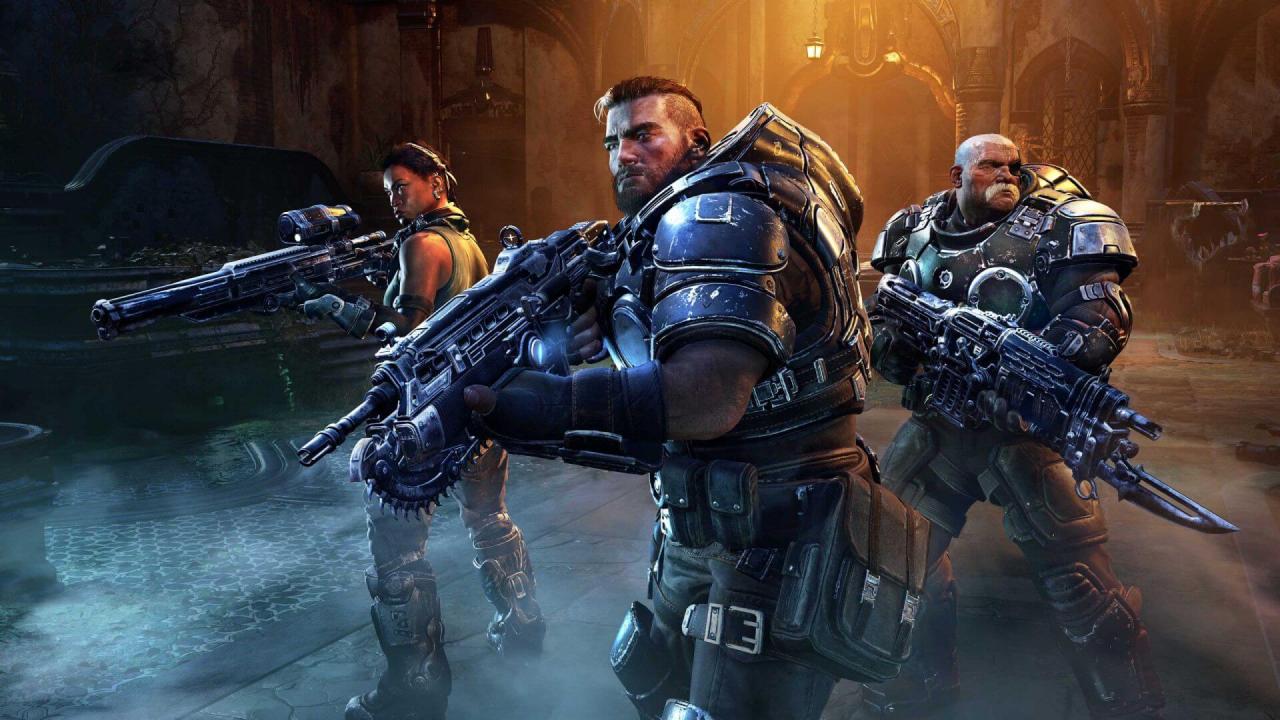 The level cap for all units is 15 (except for Jack who is capped at level 7). A rule of thumb is that your hero units will typically reach the end of the campaign around level 5-6. Additionally, try to prioritize their leveling during the campaign as they are often a required unit for story missions.

XP is gained by completing missions and killing enemies. A successfully completed mission awards a flat amount of 250 XP to any surviving units. Further XP is awarded to specific units depending on the amount of kills they personally achieved.

Kill XP is detailed as follows:

It should be noted that, during a Rescue mission, rescued recruits do not gain any XP from the mission they are rescued from. As such, try to reduce the amount of kills performed by a rescued recruit unless necessary. However, Marcella and Tyrone, rescued during Act 1 – Chapter 2, are an exception to this rule. 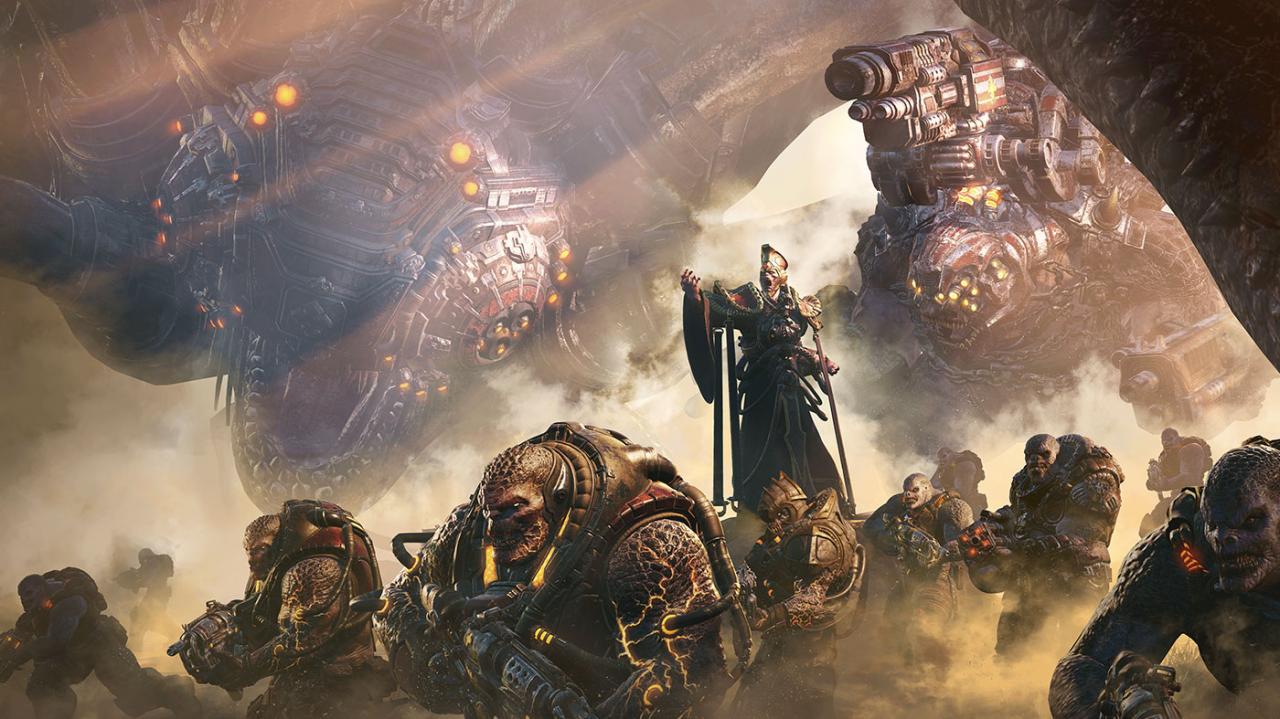 Face the wrath of Ukkon!

On lower difficulties, enemies can usually be picked off at your leisure. But higher difficulties, like Insane, require immediate suppression or elimination of spawned enemies. The following table outlines a recommendation of enemy target priority.

Enemy Type
Kill Priority
Comments
Boomer
Extremely High
Boomers are an immediate concern as their grenade launchers will knock your units out of cover and apply a Shellshocked debuff, which cripples your mobility and accuracy.

Additionally, their tankiness requires you to quickly focus them down before they push up close. If you can’t deal with them immediately opt to slow their movement with skills like the Heavy’s Suppressing Fire.

Theron Guard
Extremely High
While, the Theron Guard may not have the large health pool of the Boomer. It more than makes up for it by having the ability to concentrate it’s allies’ fire on your units. This can lead to an untimely death for any unit in half-cover.

Additionally, the torque bow has a surprising amount of range; rivaling the Locust Sniper’s longshot when RNG decides to forsake you.

Locust Sniper
High
Snipers should be dealt with quickly as they will easily, and happily, one-shot your units. Their AI on higher difficulties tends to ignore cover and constantly attempt to shoot at you instead of pinning your units.
Kantus & Zealots
Medium
The Kantus, and its improved Zealot version, should be prioritized mainly due to its annoying capability to buff their allies with damage reduction. However, they usually hide near the back-line and rarely push up, which renders their powerful AOE scream opportunity attack quite harmless.
Locust Grenadiers, Wretches & Tickers
Low
Grenadiers, and the other flusher units, are mostly cannon fodder but their opportunity attacks and aggressive behaviour will require you to actively mop them up before they get too close. However, their AI tends to group up making frag grenades a simple solution.
Hammerburst Drones & Disciples
Extremely Low
Hammerburst Drones, and their improved Disciple version, are plentiful but easy to deal with. Since, they tend to prioritize overwatch actions as opposed to opening fire. You should mainly aim to down as many as possible to set up for an execution chain.

Disciples are slightly tougher and more aggressive with their only major difference being the poison debuff on death, which is not much of a deterrent. 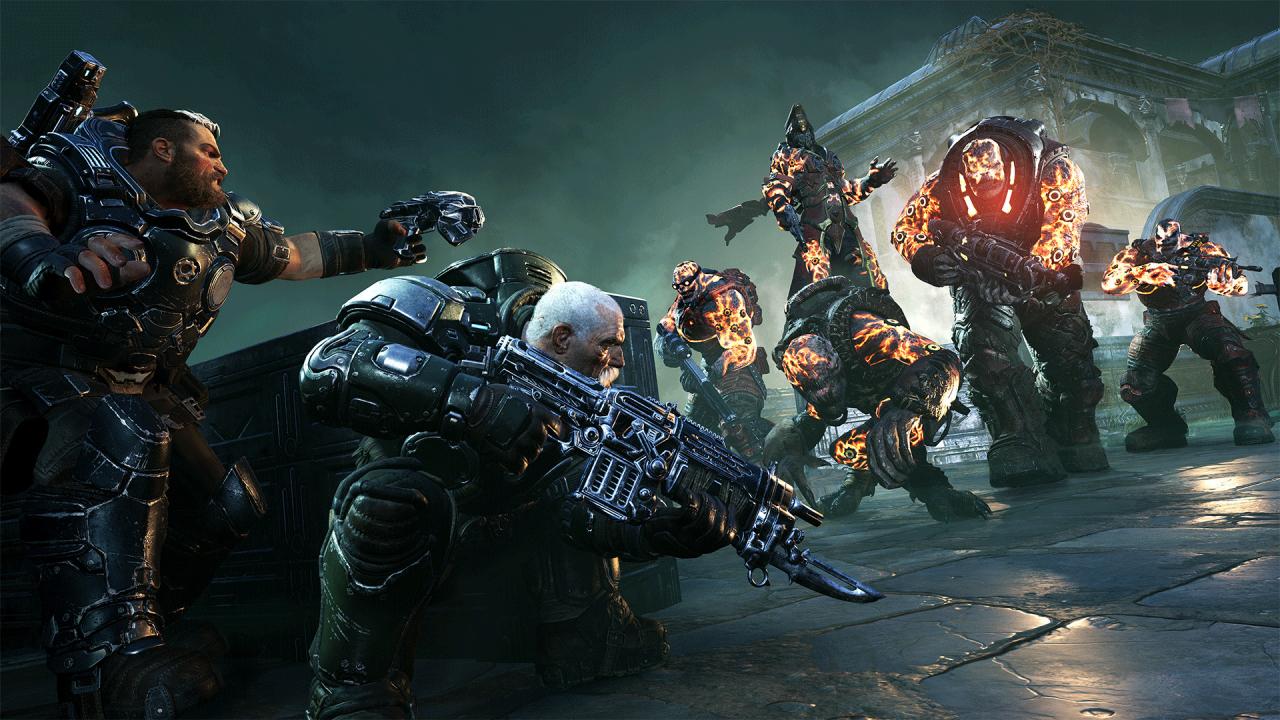 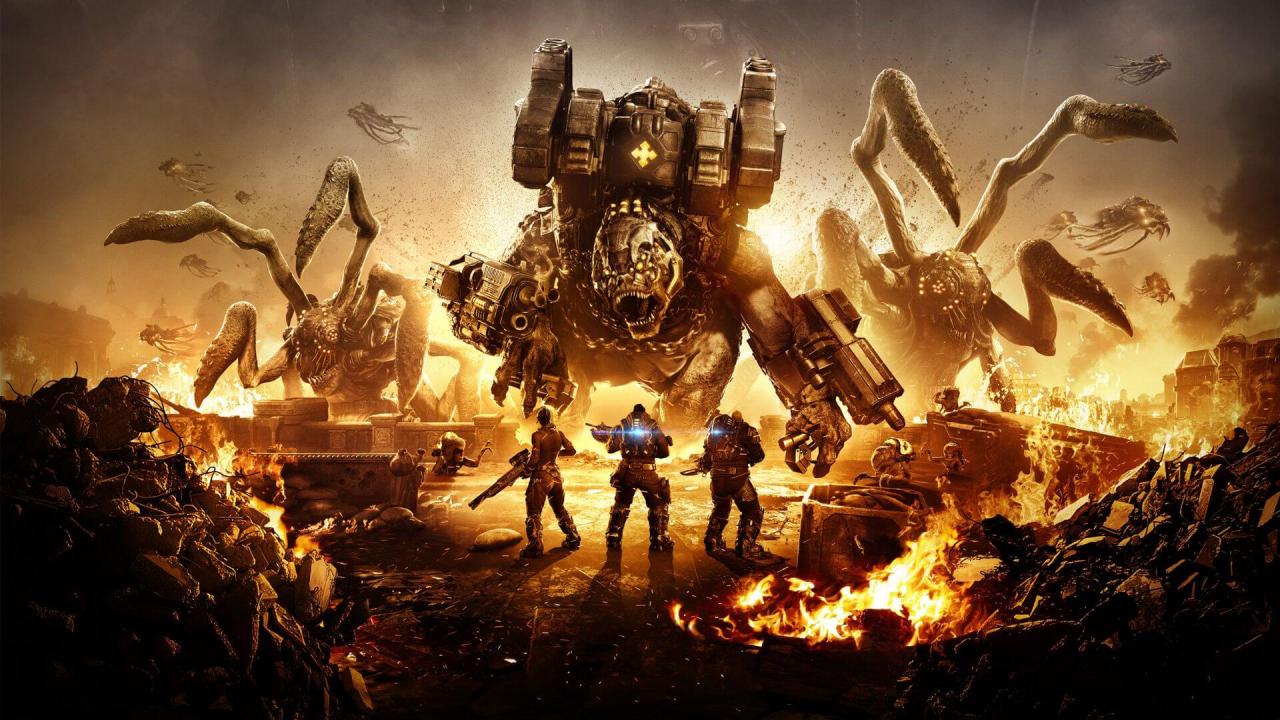 Replayability is a big factor in my enjoyment of a game. So I always appreciate it when there’s opportunities for accessible modding.

You currently aren’t able to modify UI or visual features but you can easily adjust values (e.g. lootbox rarity, enemy spawns, and equipment stats) by accessing the game’s Excel sheets.

I personally recommend the following mods to enhance your experience after you’ve played out the base game.

Ukkon’s Wrath[www.nexusmods.com]
If you ever felt that the enemy density was sparse, then this is the mod for you! It heavily increases the total amount of enemy spawns and unit variety for every mission. Face the full force of Ukkon’s monstrous army.

Lootbox Enhanced Plus Supreme[www.nexusmods.com]
This mod adjusts the Supreme mod drop appearance and increases the rarity of overall lootboxes. Super helpful since Jacked mode has severely neutered the drop appearance of Legendary equipment in Veteran missions.

Modding Excel Guide[www.nexusmods.com]
If the previous mods don’t meet your needs. Try customizing your own values to curate the most enjoyable experience for you.

Otherwise, feel free to browse mods created by other members of the community here.[www.nexusmods.com]