New player? or trying to get certain achievements for the “Downtown” level or beating the game on the Extreme or Insane difficulty, but keep getting gunned down by the soldiers sent to stop you? well this guide may help.

Now first you need to “Exterminate the Populace – 150,”

Now if you’re playing on the Insane difficulty you will not be rewarded with respawn points and if you die, you have to restart all over again. But in order to get the “No more traffic” achievement then you have to complete all of the side-quests, but if you’re playing on the Extreme difficulty or anything below that then here’s what to do first. Kill the politician first as he will reward you with one respawn point, now as many citizens in the crowd as you can but do not stay out in the open, run to a nearby building and start to kill the arriving police officers as you will need to do this in order for the S.W.A.T. officers to spawn. 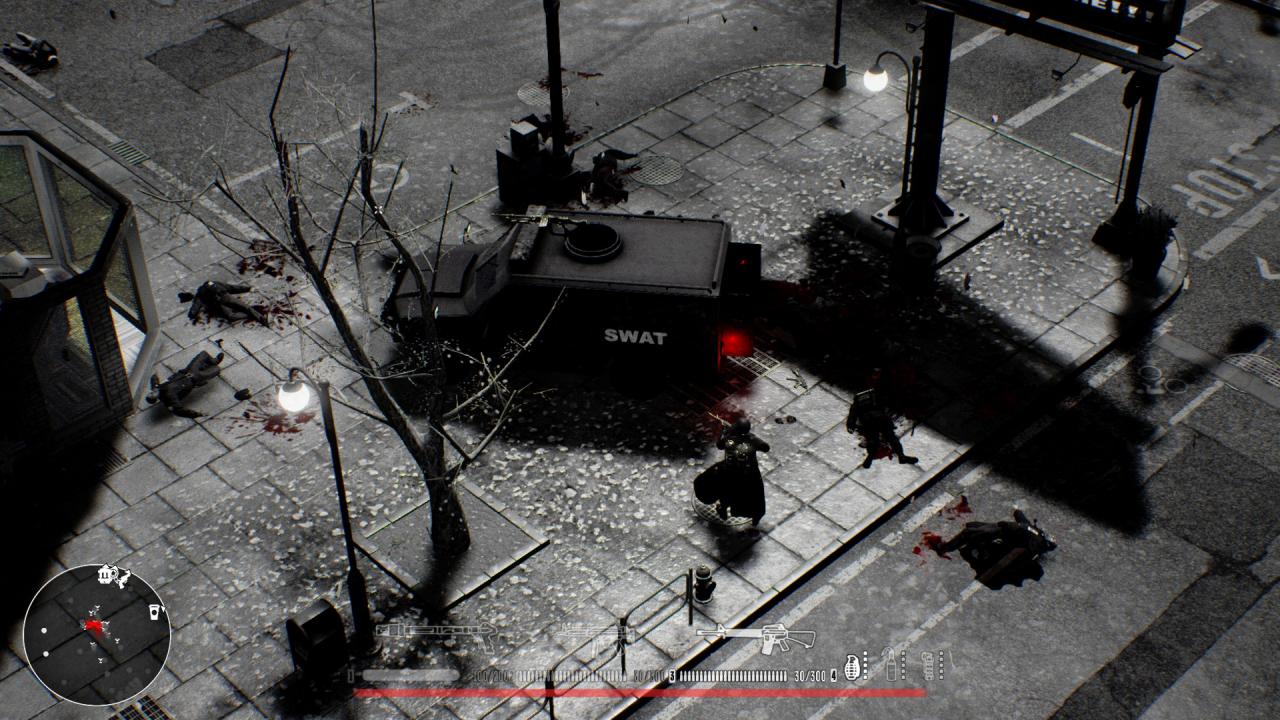 Make sure to stay near the area where the politician is in as you need them to arrive in vehicles. Be aware that on the higher difficulties, vehicles are just as weak as you are so be careful, make sure they don’t take enough damage for them to be destroyed. Now that you have your truck with the MG you want to complete the side quests (All of them if on the Insane difficulty if you’
re going for the achievement) as they will help get us closer to our objective and reward you with respawn points. Be aware that it’s critical to stay on the move and to kill the police and S.W.A.T. before they start shooting you. 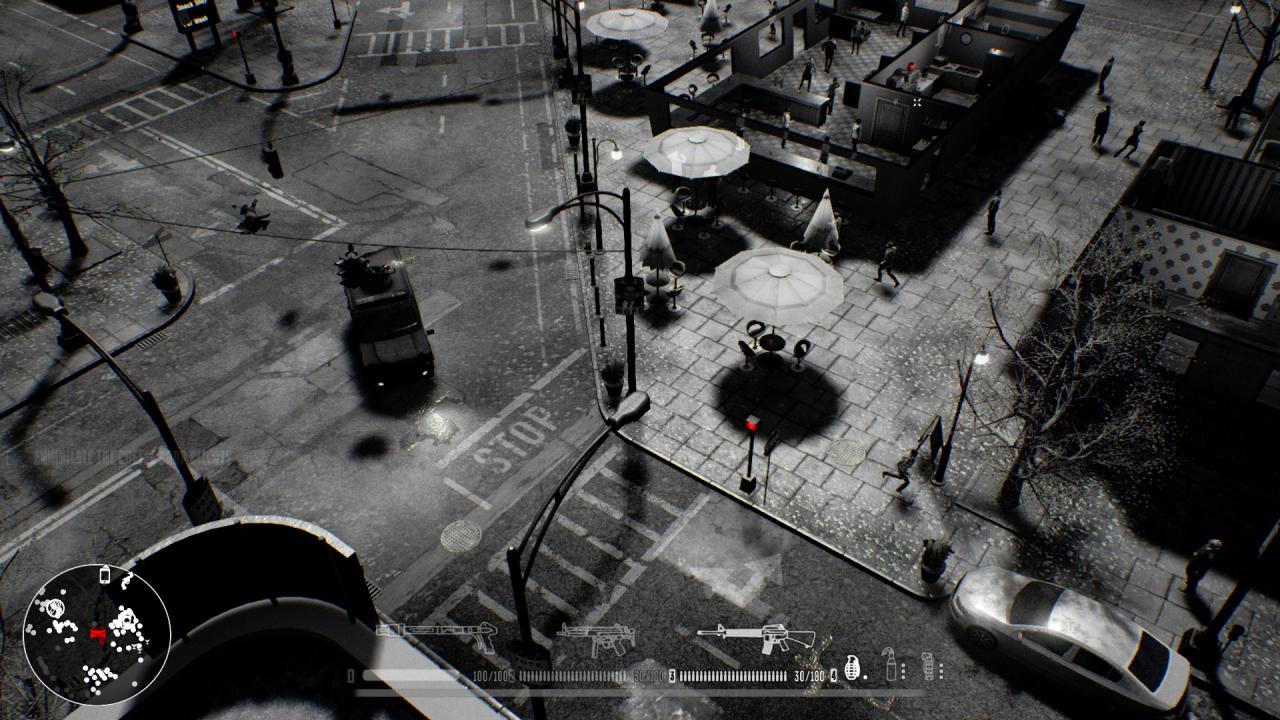 this one is easy as you only have to kill a few of the hipsters inside to complete it, but be careful as you are in the middle of a intersection and cops will spawn rapidly in this area, and as you kill more and more people the more abundant they become.

Now that we have two respawn points lets move on to the more complicated side quests.

Alright now drive up to the bank. Don’t go inside if your sure you’ll loose but if you can mange, then you can get armor and more S.W.A.T. trucks, but make sure they have the MG.

You want to kill all the civilians out front and some on the inside, then drive out to the back, and there is a red propane canister on a barrel, shoot it and you’ll be rewarded with another respawn point.

Now you should be getting much closer to our main objective, Killing the incoming Soldiers.

By now you should have three respawn points. now for a more risk-reward side quest, “Shoot people at the Weapons Convention” this is difficult you do not have to do this if you’re just wanting to get past this section, but if you’re going for the “No more traffic” achievement then this must be completed. what you want to do is drive to the coffee shop and stand a distance where they cannot shoot you. and open fire on them but make sure not to let them get close. But more cops and S.W.A.T. will spawn as you rapidly kill people, if you’re approaching the quota of exterminating the populace then don’t kill anymore civilians and read the next section. 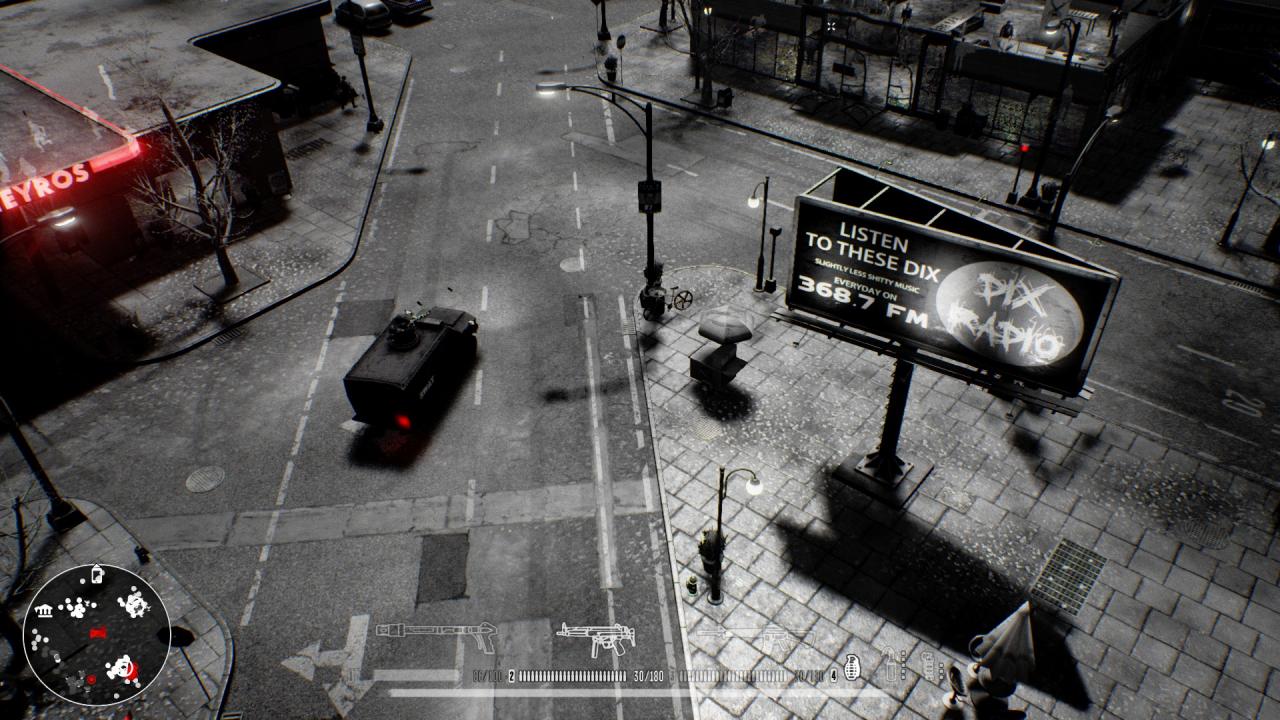 Now for the final phase.

For the final phase. and for what you’ve came for this guide for. Drive your truck to the “Aphone Premiere” to the very back. 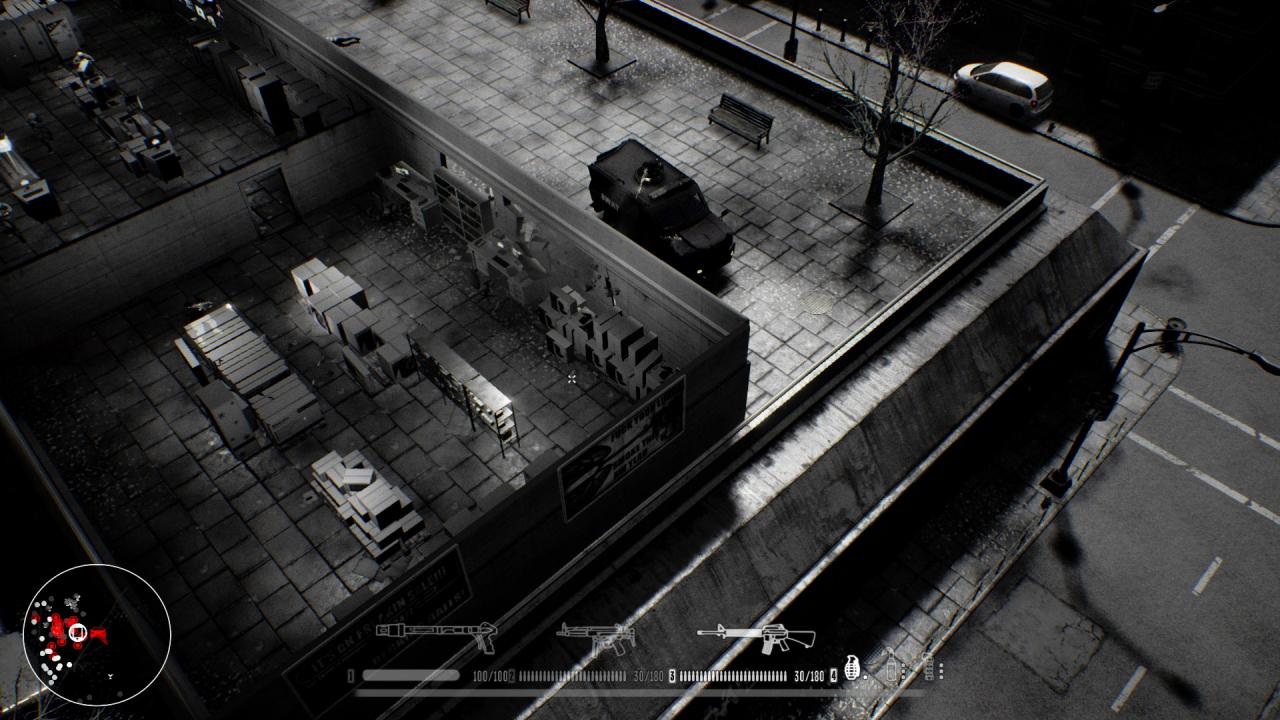 and start shooting out the wall next to you, as this will give you the ability to slaughter more of them, plus they cannot shoot you. Patience is key, let them come to you, and be aware that the A.I. in this game is kind of broken so they’ll sometimes just run away from you and back. the goal is to kill Forty of them, but for the Insane difficulty players I recommend you kill all of them before proceeding to do the remaining side quests. 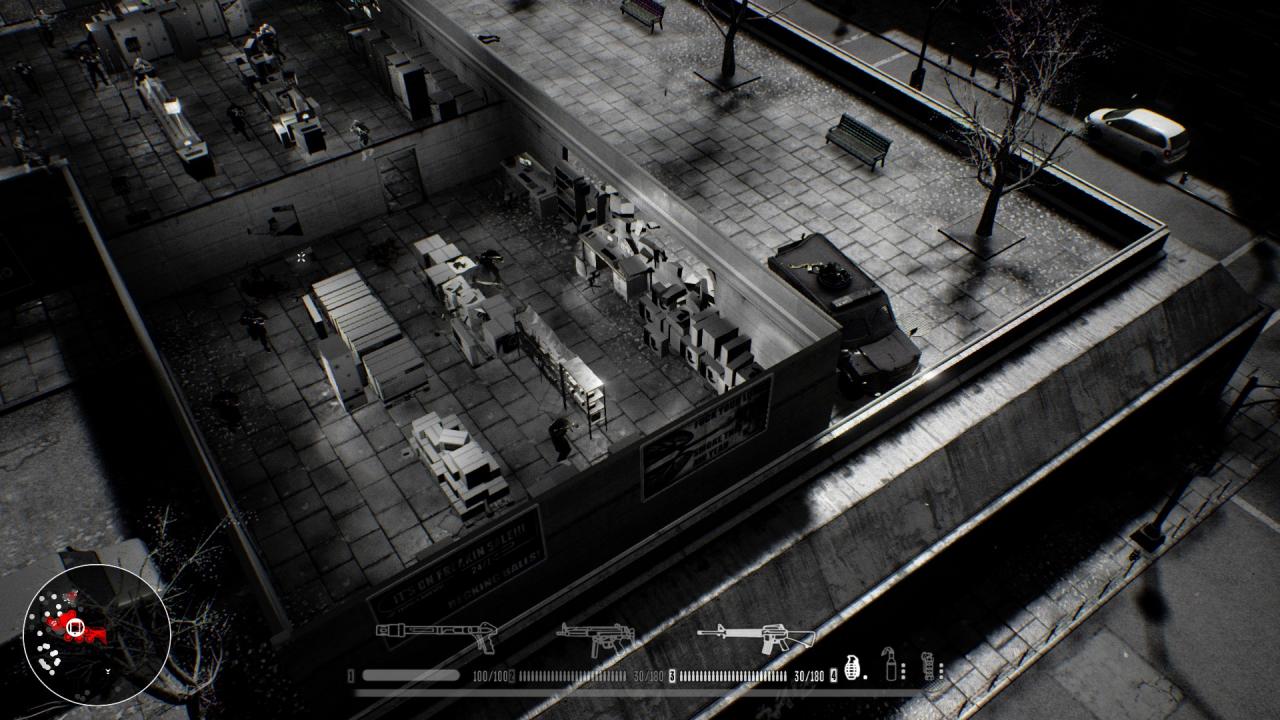 and make sure to watch the corner up to you, as they can sneak up and start shooting you. Now keep killing them until you complete the quota, but if your vehicle is destroyed no biggie. 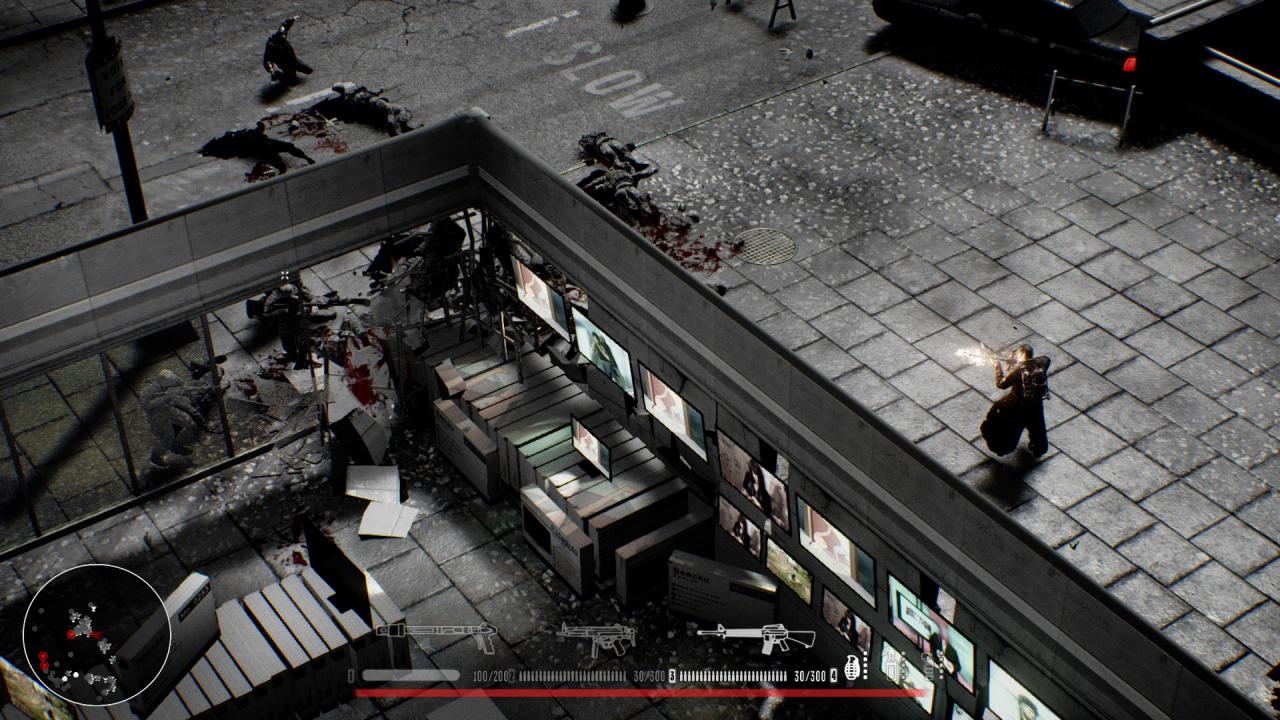 go near the corner and start shooting them as they wrap around.

Now once that is done you can proceed! or if you need to do any remaining side quests then now is the time to do so as cops, S.W.A.T., and soldiers will stop spawning.