This guide is intended for new players who have never played this series before. It also includes translations to the screens present in the game 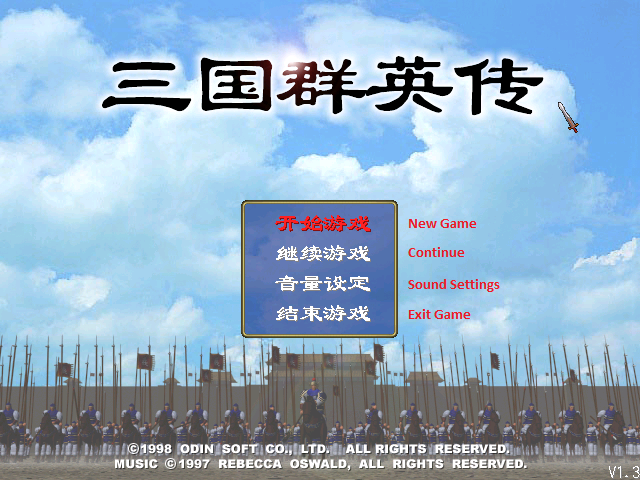 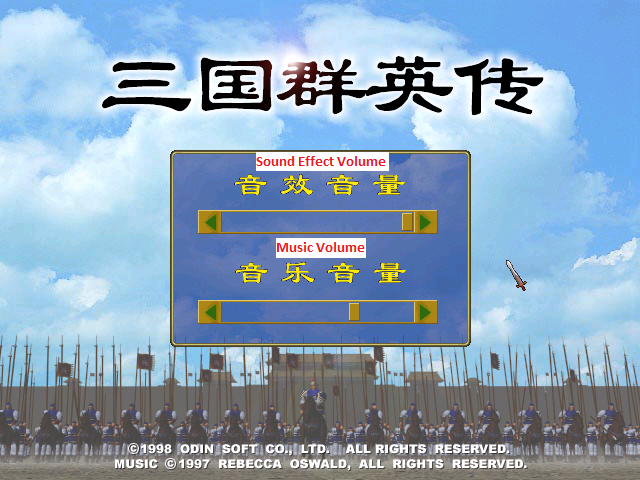 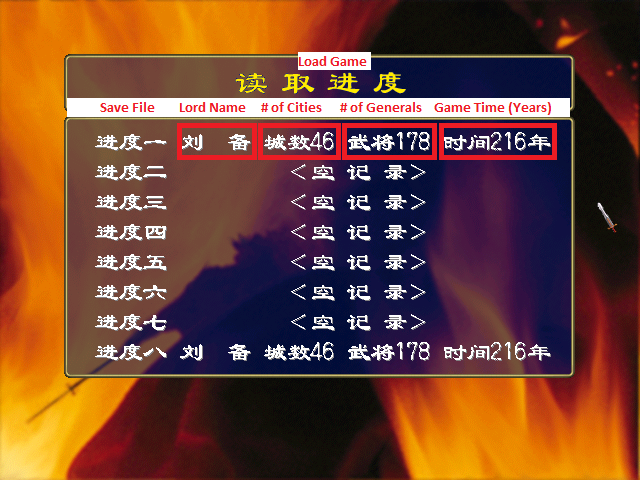 Major Events Selection
There are 5 total events you can select, each will take you to a different time period within the Three Kingdoms history. The lords, generals and cities owned will change according to the event 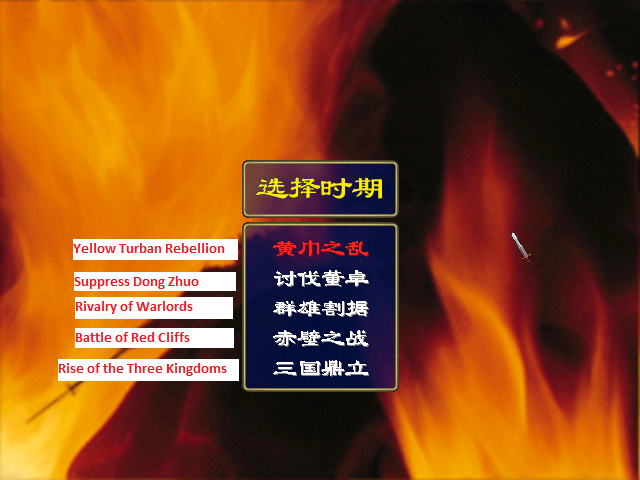 Lord Selection
When you hover over a lord’s name, you will be able to see their information.

Money: Every 100 gold recruits 1 soldier
Population: The more population you have, the easier it is to get money
Cities: Number of cities you own. Owned cities will be shown in red on the map above
Generals: Number of generals you have. You will be sending generals into fights to capture more cities and generals from other lords
Soldiers: Number of soldiers you have. Soldiers are used in battles, and each general can bring a certain amount of soldiers to battle. Each general starts with 10 soldiers, but will increase as they level up 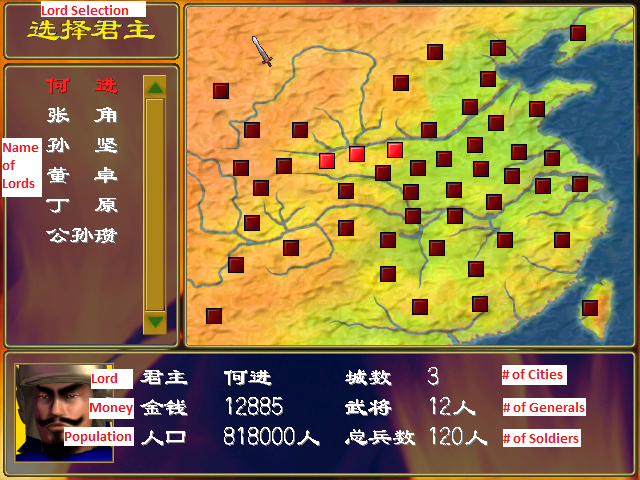 After starting a new game, you will be brought to this page. This is the most important part of the game, as it lets you strengthen your army

Use Items: Allow you to use and equip items to generals. More details below
Generals Info: Allows you to select a general to view its stats. More details below
Recruit Prisoners: Allows you to attempt to recruit prisoners. The prisoner must be in a city in order to recruit. I’m not sure what determines if they want to join you or not
Search: Allows you to select generals in order to search for items and equips, but not guaranteed to find anything
Build City: Allows you to increase the defense of the city the general is in. The higher the defense, the easier it is to defend that city from enemy invasions (General and soldiers will have higher evasion).
Develop City: Allows you to increase the population of the city the general is in. The higher the population, the more money you will earn, which will turn into more soldiers
World Map Overview: Allows you to view the information of all lords
Promote General: Allows you to select 1 of 3 positions to promote the general into. The position will determine which active skill the general will learn when they reach level 10
End Directive: Brings you back to the world map. Will bring up the confirmation screen
Save Game: Allows you to save your game. There are 8 total game files you can use for the save. Will bring up the confirmation screen 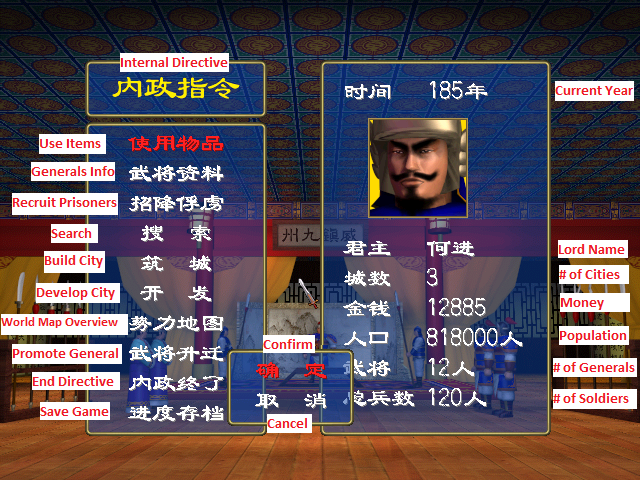 Use Items Page
There are a variety of items you can obtain in this game, below are the general types of items. You can only have 1 equipment at a time, but can use 1 of each one time use item 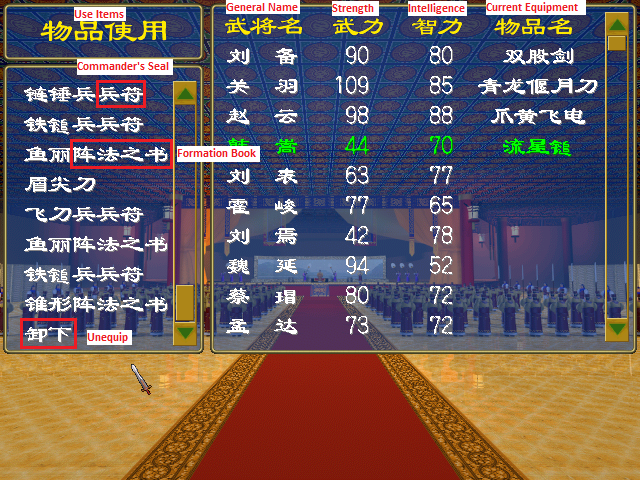 General Details Page
Allows you to see all the details of the general, such as stats, equipment, skills, and types of soldiers/formations available 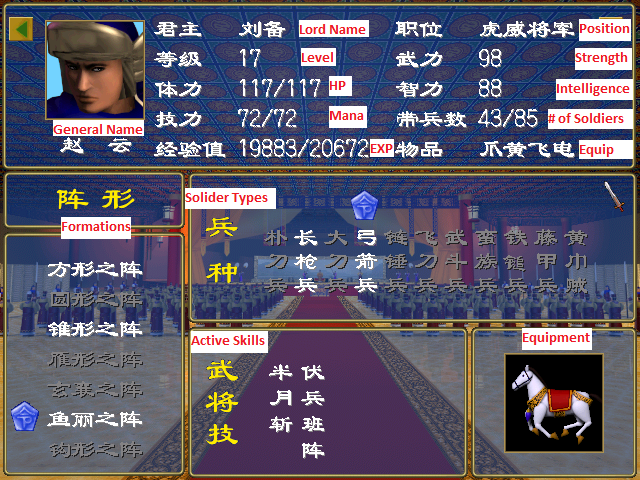 The world map is where you will be commanding your troops to capture cities. Left clicking on an empty space will bring up the command menu

Find General: Allows you to select a general under your control and go to the city they are in 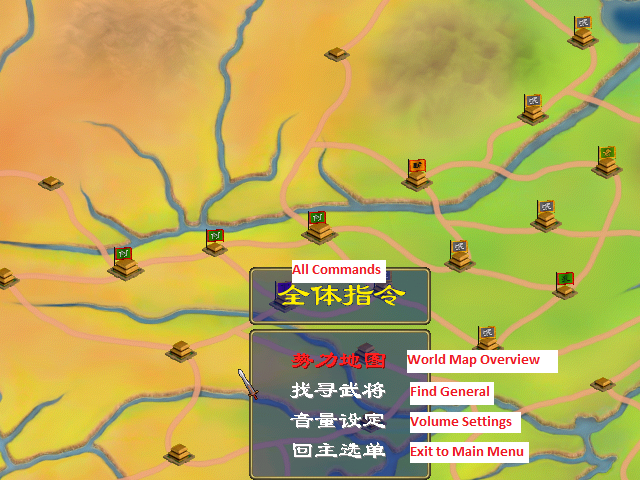 After selecting a general, or left clicking on a city you own, you will get this screen 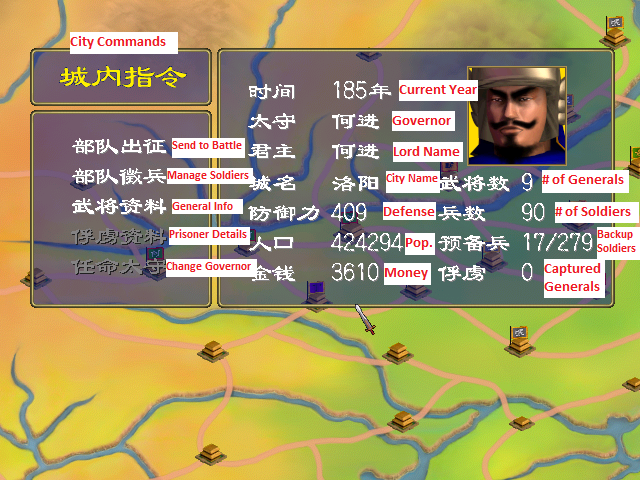 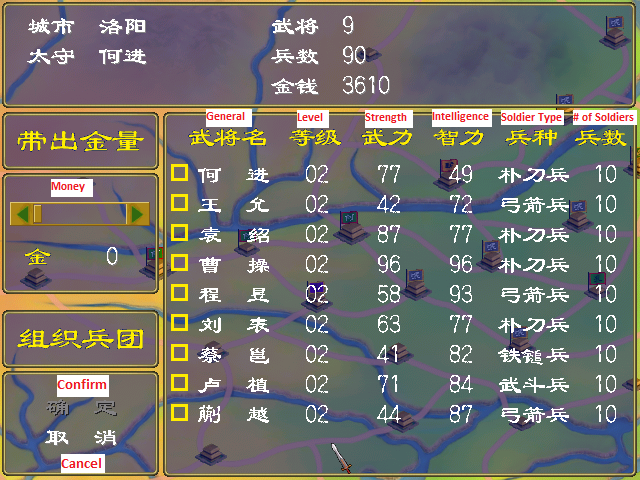 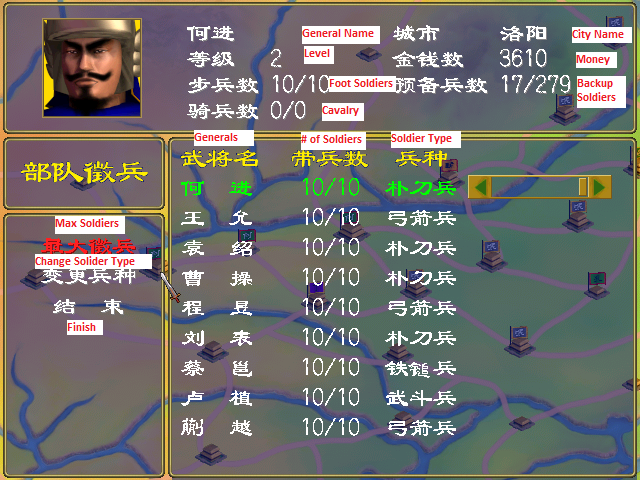 If you click on Change Soldier Type, you will be able to select another type soldier available to the general. Below are the different types of soldiers available in the game (Yellow Turban is the worst, never use it) 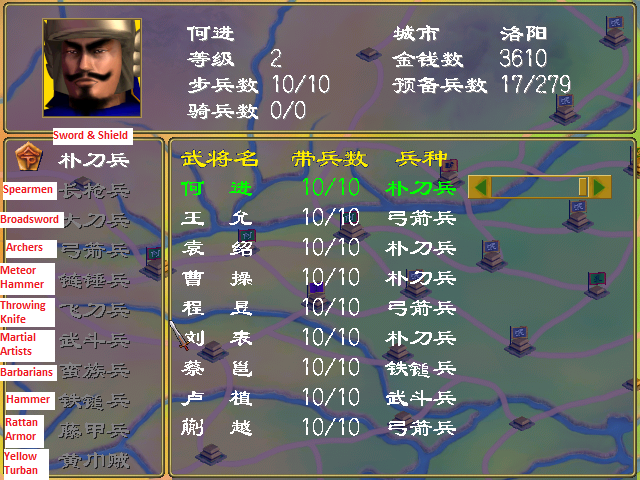 After your marching generals have reached an enemy city or troops, you will be greeted with the combat preparation screen. Here you will be able to see which general the enemy is deploying, and you can select one of your generals to engage in combat

City Defense: Shows the defense of the city you are trying to capture
Terrain: I think the terrain impacts the type of soldier fighting on it, but not 100% certain
General Position: Shows the position of your general. Usually your generals will be positioned at the back, but if you change it to the front, all the soldiers will appear behind the general. Positioning in front is useful when the enemy have very low HP, as it will allow your general to close the gap quicker

Battle: Sends your general into combat with the enemy
Select Formation: Allows you to change the formation of your general. Since you can see which formation the enemy is using, you can counter it accordingly
General Position: Allows you to position your general to either the front or the back
General Information: Brings up the information screen for any general present, yours or your opponents
Retreat: Allows you to retreat all your generals from the battle. This is useful when you want to send multiple waves of troops to capture a city. You can use your first wave to take out the enemy soldiers, then retreat to make your other waves have an easier time 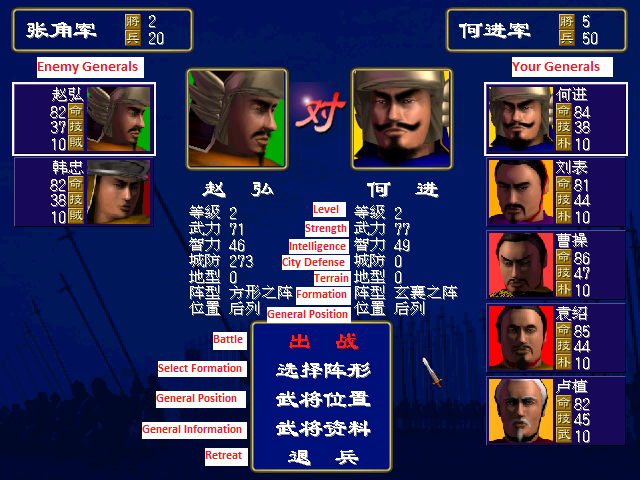 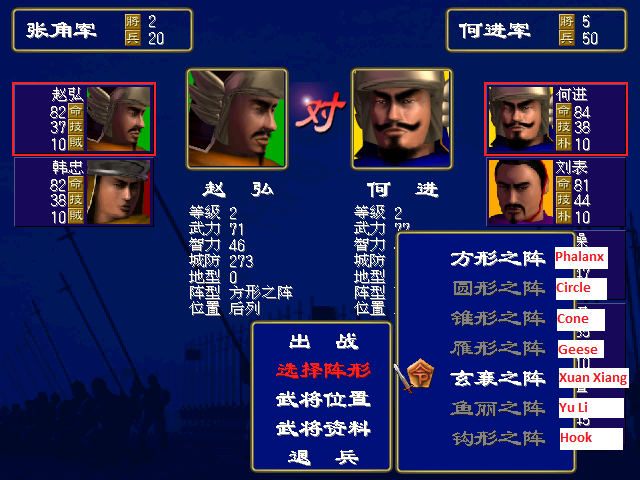 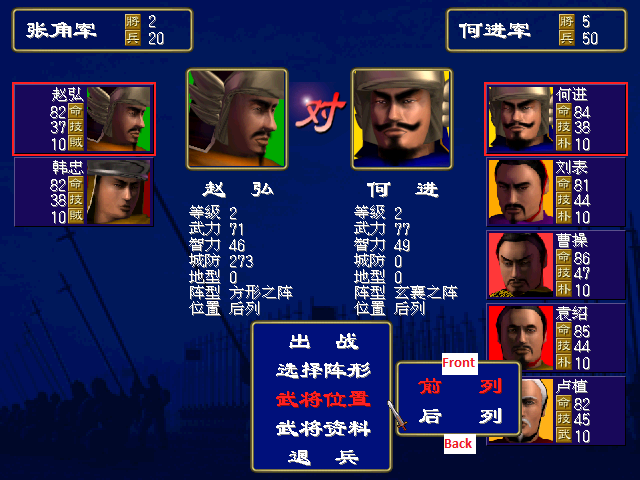 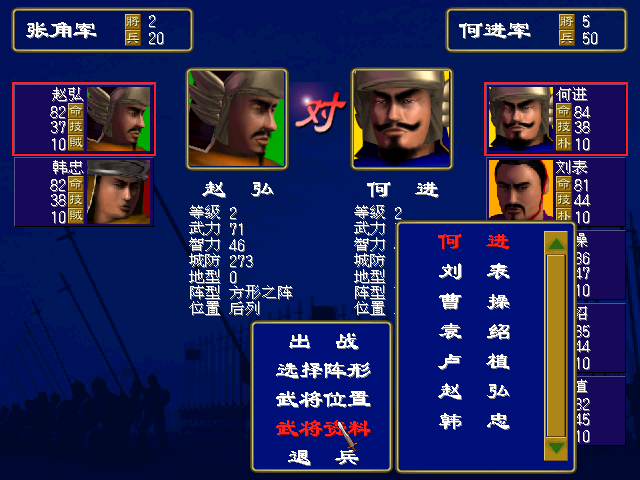 After sending your general to engage in the enemy, you will be greeted with this screen, where you can control the soldiers and the general. You can left click to bring up this screen again after selecting an action. There is a minimap on the bottom of the screen, allowing you to see the positions of all soldiers and generals. The white dots represent generals, the red dots represent the enemy’s soldiers, and the green dots represent your soldiers

Combat Basics: It’s best not to use the advance all soldiers option, as it will clump all your soldiers together, making them more vulnerable to the enemy general’s skills. If you are not sure if you can win the battle, wait for the enemy to engage you instead, as it will make it easier for you to retreat if needed

Advance Soldiers: There are multiple options for advancing your soldiers, which will be available based on which formation you are using
Advance All Soldiers: This will send all your soldiers into battle. NOTE: After you select this, you will no longer be able to control your soldiers
Activate Skills: After the sword shaped skill cooldown bar is completely filled up, you will be able to activate a skill
Advance General: This will send your general towards the enemy general
Retreat: This will allow you to retreat your general. After selecting this option, your general will turn backwards and retreat to the right side of the map. You won’t be able to use any other options if you choose to retreat, such as controlling soldiers and using skills. 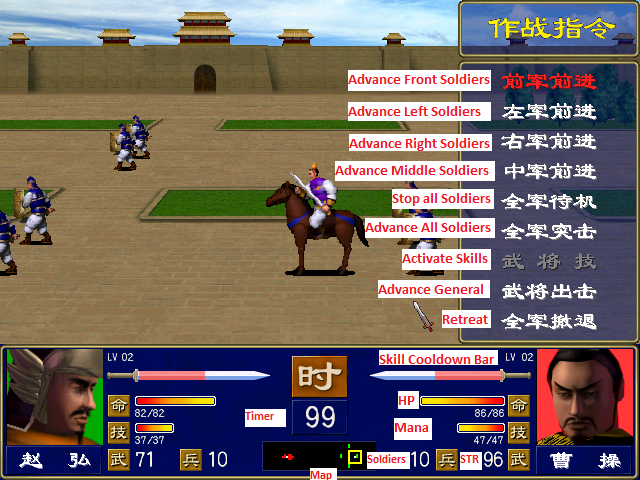 Activate Skills Screen: Shows the affected area and mana cost of the skills when you hover over them. Left clicking a skill will cast it immediately. NOTE: While the skill animation is in effect, you and the enemy won’t be able to control anything on the map. You can use this to delay the enemy’s skills 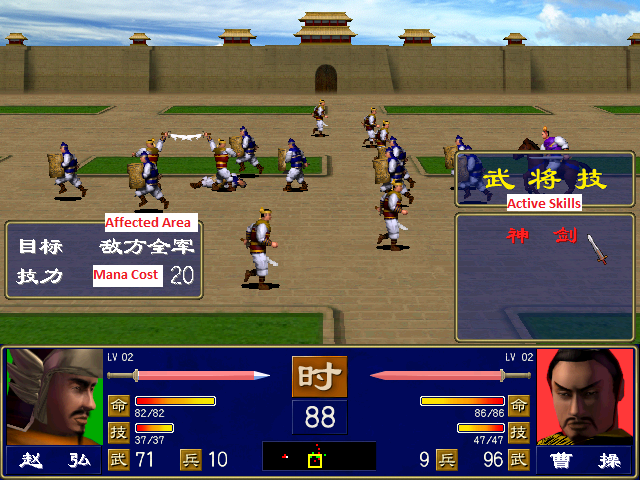 After engaging in combats, all defeated or retreated soldiers will be greyed out. The combat will end when either side have no more generals to engage in combat. 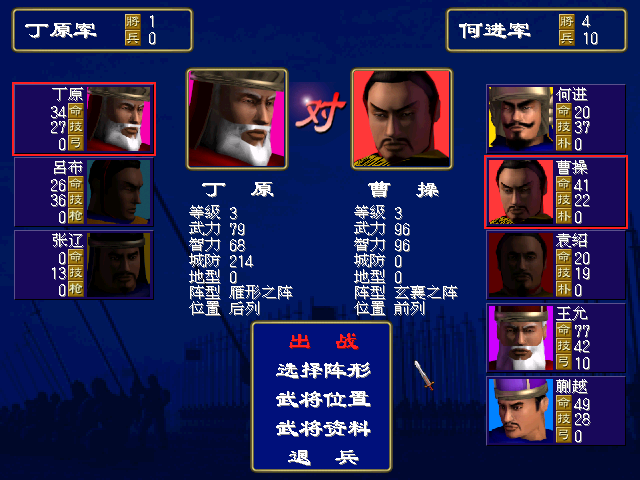 After you have defeated or recruited all enemies, the game will be completed. You don’t need to capture every city on the map.

This game is fairly fast compared to the games afterwards. If you want to play more, you can try a different event during new game selection