Helpful things you need to know when starting out.

First of all, I highly recommend playing on Easy to start with, at least until you fully understand your squad and all the game’s mechanics. Easy mode has a reduced number of enemies which gives you some more room to breathe while you’re learning.

The game’s format was a little confusing to me at first so I’ll explain it here.

This whole process is called a Timeline. At any point you can choose Abandon Timeline from the menu and start again, carrying over a single pilot.

Note that since you can only complete 4 missions on a single Corporate Island, there will always be 3 you cannot do. Choose your missions wisely.

Basic gameplay
The goal of Into the Breach’s missions is to survive until the end of the final round, while preventing as much damage to buildings as possible. You shouldn’t tunnel vision onto killing certain enemies, removing all the immediate threats comes first.

The first thing you should be doing when the round starts is looking exactly at what each enemy is attacking, and in particular, which ones are attacking buildings. These Vek are your main targets, and you need to figure out how to prevent all their attacks. There will usually be more enemies attacking than you have Mechs to respond with, that’s part of the challenge.

The best RNG you can receive in this game is for the enemies to target your Mechs and not any buildings. If they’re targeting you, you can simply move out of the way and avoid any damage. The Mechs are your tools for defending buildings, let them take all the damage. An effective tactic is simply body blocking enemy attacks. Damage to your Mechs is repairable, but damage to buildings isn’t.

When planning your strategy, you can move units around to see if your attacks will reach as well as how they will impact the environment; just hit Undo Move to reset. You can do this as many times as you like for free.

Attacks cannot be reversed so easily, and they finalise any moves that were made beforehand. You do have 1 complete reset of a turn, but you should absolutely save this for when you make a critical mistake.

Knowing the order in which events will occur is essential for planning your strategies. You can check the order of attacks and everything else by hovering over the icon in the top right corner or by holding down the Alt key. 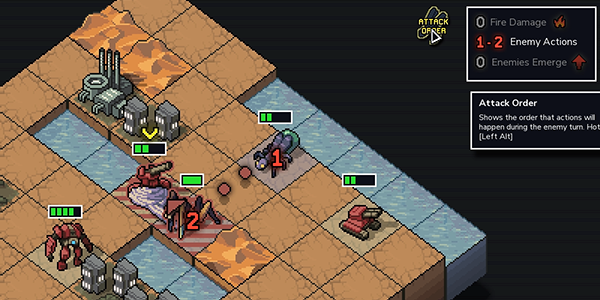 I know this Firefly will kill the Leaper before it can attack.

You will always need to check the combat order to see when enemies will attack but there are a few events that are consistent. Burning units will always take damage before anything happens, meaning you can ignore any 1HP enemies on fire. Storm damage works in the same way if you have the Rusting Hulks squad. Instant-kill tiles such as air strikes and thunderstorms (all the yellow ones) will occur before anything can attack also. Lastly, the purple Vek Leaders will always act before any other enemies.

The Rift Walkers are a very solid squad because they all possess a move attack. While they could been seen as lacking in damage, they’re excellent at responding to enemy attacks. They could all benefit from an extra weapon for more versatility. In particular I feel the Combat Mech needs a ranged or moving ability; it can sometimes be barred from attacking where you really need it. I’ve had success equipping the common weapons: Boosters and Targeted Strike (single use but it has saved me on many turns).

The Grid is your health bar in Into the Breach, and it’s game over when this reaches zero. Every time an enemy attacks a building, you lose one bar of the Grid. Some tiles contain 2 buildings so you can lose 2 Grid at once from a 2 damage attack. Preventing damage to buildings is therefore always your number 1 priority.

You can repair the Grid by completing missions with the lightning bolt symbol (and not failing the related objective), or by purchasing Grid from the Reputation shop after completing an Island. I would recommend prioritising missions that reward Grid if your Grid isn’t already full.

The number next to the Grid is your percentage chance to resist damage dealt to buildings (and losing a Grid). The base percentage is 15% but it’s possible to raise it to above 30%. Once the Grid is full, you can increase it in the same ways you would gain Grid. Some pilots also carry a +3 Grid Def perk.

If you push an enemy into another enemy, a mountain, a Mech or whatever, the enemy will take 1 extra damage on top of whatever the attack deals. Whatever you push the enemy into will also take 1 damage. You should always be looking to deal that added bump damage whenever you’re attacking. 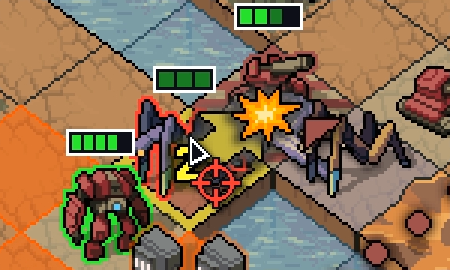 This 3 HP enemy can be killed with a 2 damage punch, but the Tank Mech also takes 1 damage.

This bumping mechanic is a double edged sword because it can often prevent you from being able to use certain attacks for fear of damaging buildings or Mechs.

Mechs have the ability to repair 1 health per turn instead of attacking (hotkey is R). Repairing will also remove flames, acid and break the Mech out of ice. Sometimes you’re going to want to pass the turn without attacking, make sure to use this opportunity to repair if you’re missing even a single bar of health.

Blocking is when you place your Mech on the tile where a Vek will emerge next round and prevent it from emerging. You will take 1 damage each turn it remains blocked but you can simply repair this damage and keep on blocking. It is even more effective to move enemies to block the tile, causing them to take the 1 damage and keep another Vek off the board.

Basically if you don’t need to prevent an attack, you aren’t on low health and need to repair, and you don’t need to kill a particularly dangerous Vek, you should be blocking. If all you have left are weak or low health enemies, instead of killing them, it is smarter to block and prevent a more powerful Vek from potentially emerging. 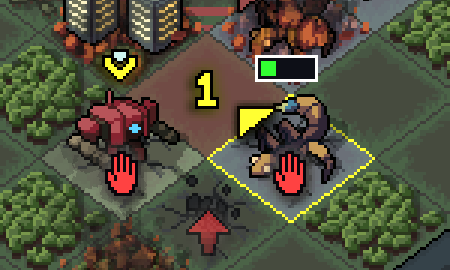 This 1HP Scorpion will block another Vek and die in the process, always satisfying.

It’s good practice to keep your Mechs around the centre of the board, which allows them to respond to Vek threats wherever they may be. One of the most annoying occurrences is having a Mech (melee or otherwise) unable to prevent an enemy’s attack because it is just out of move distance.

Ranged Mechs such as the Artillery Mech can perform well at the edges of the board but it’s often better to have them close, so your other Mechs can protect them, and so they can body-block to prevent building damage.

Don’t get caught up on objectives

You get a special reward for completing all bonus objectives on an Island but you shouldn’t worry about them so much. There will be plenty of times when completing the bonus objectives AND preventing all building damage simply isn’t possible. Unless you’re going for achievements, generally it’s wiser to choose the latter.

The importance of move

Move is probably your Mech’s most important stat. Having high move gives you so much freedom to develop strategies and counter the Vek. If your Mech has 3 or more health, you should definitely buff its move first (unless it requires high health e.g Hazardous Mechs).

Mechs and enemies with the Flying trait can hover over water tiles, lava tiles and chasms. I still forget this sometimes and try to send Hornets over the edge expecting them to die, don’t be like me 🙂

Flying Mechs have more mobility than other Mechs because they can move over enemies and buildings to anywhere within their move radius. Normal Mechs are blocked by these and have to take longer routes.

Fliers will still take the effects of fire and acid if over such a tile, even if it looks like they’re simply hovering over it.

When Mechs are destroyed

When a Mech is destroyed, the pilot dies. You can get another pilot from a Time Pod or as a reward for getting a Perfect Island. In the meantime, the Mech will be operated by an AI pilot which works the same as normal but the AI cannot gain XP and does not have any added perks. The Mech will still carry any Reactor Core upgrades you have put into it.

If a Mech is destroyed during the first stage of the final mission, the Mech will be brought back for the second stage with an AI pilot.

Pilots gain XP for killing enemies and can level up twice. You can see a pilot’s XP bar next to their portrait in the top left corner. It’s worth trying to finish off enemies with pilots who still need to level up, rather than max XP ones. Each time they level up, they will gain one of the following perks:

You should swap pilots around to cover the weaknesses of your Mechs. For example, a pilot with +1 Mech Move can supplement a Mech with 3 move really well, but is a bit unnecessary on a Mech with already high move.

For pilots with +1 Mech Reactor, the extra Reactor Core shows up as a green oval, rather than a yellow one. 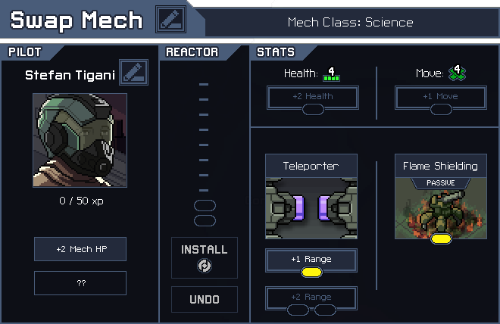 Moving Stefan to this Mech means I don’t have to spend Reactor on buffing its HP.

When you finish a Corporate Island, you can spend the Reputation stars you were awarded for bonus objectives. Most of the time, you’re going to want to be purchasing Reactor Cores and Grid Power (if your Grid isn’t full), but it is nice to pick up a second weapon for your Mechs. You can also sell pilots or weapons that you aren’t using for more spending power.

You cannot bring your Reputation over to the next Island but you can hold onto your weapons/pilots (which are all worth 1 Reputation). This means, instead of wasting any left-over Reputation, you can buy weapons that you don’t intend to use, and sell these at the next Island (if there is something you want to buy there). 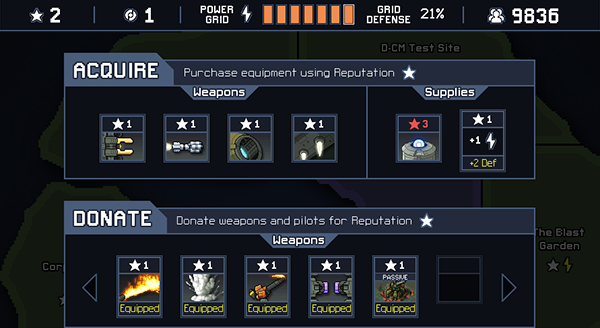 I don’t have enough to buy another Core and my Grid is full so I’ll buy a couple weapons and hold on to them to sell later.

Mechs can be upgraded using Reactor Cores, one of the most precious resources in the game. Reactor Cores are acquired from Time Pods, as rewards for certain mission objectives and from the Reputation shop. You can see your total Reactor cores at the bar at the top.

The poke ball symbol is your Reactor Cores.

Once a Reactor Core has been added to a Mech, and that Mech is taken out on a mission, it cannot be moved to another Mech. Otherwise, you can remove Reactor Cores and switch them around. Once Reactors Cores are in a Mech for good, they can be moved around to power different upgrades. 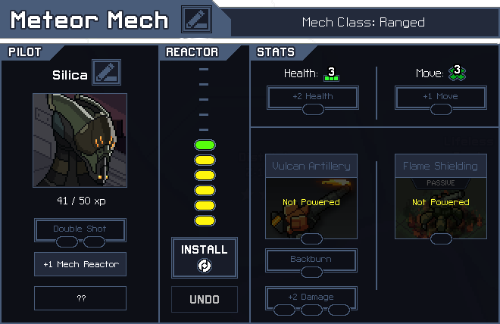 You can see the total Reactor Cores loaded into a Mech in the bar in the middle.

Reactor Cores can be used to power an upgrade to the Mech’s health, an upgrade to its move, or various upgrades to its weapons. Some special pilots also have an ability that requires Reactor to power. It’s important to know that there is no order to powering upgrades for a weapon. 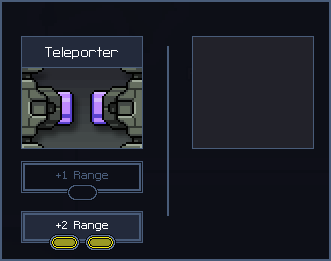 I always thought you had buy them in order :/

Which pilot to bring over

You can only bring one pilot over to another Timeline so who do you bring? I recommend bringing someone who can buff your early-game Mech with a combination of +2 Health, +1 Move or +1 Mech Reactor. Make sure to move the pilot over into whichever Mech you want to buff (ranged and science Mechs can really benefit from the +2 health).