This is a short primer on the basics of the game, pattern matching, pattern reduction and guessing techniques. Many guides on the classic minesweeper are available online, and this guide only seeks to present the most important points, as well as unique features of this game.

For the purpose of this guide I’m assuming that you are familiar with the very basics of minesweeper:

It should also be noted that in this game, you control an avatar, which changes a lot of traditional minesweeper concepts. However, the basic minesweeper principles still apply. These basics will be explained here, with additional explanations if the avatar makes things more complicated.

For the purposes of this guide, I’m using a certain notation to explain board states. It looks like this:

The numbers 1, 2, … stand for numbers on tiles, a B is a known bomb, a ✔ is a safe tile and a ? is an unexplored and uncertain tile. The letter X can be any tile with a known state, such as a number, a known bomb or a safe tile.

Reduction is simply the concept of reducing each number (in your mind) by how many flags it touches. When a number is reduced to 0, all unexplored tiles that it touches are safe! Furthermore, this is important when pattern matching, as explained below, because complex situations can be reduced to basic patterns with this method.

These two basic facts of the game give way to a number of more complex patterns. A good way to think about this is to think of each bomb as being constrained to a certain area where it can be.

The first and most important pattern is the 1-2-X pattern: 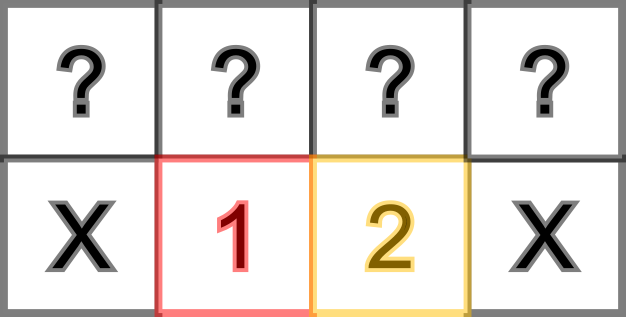 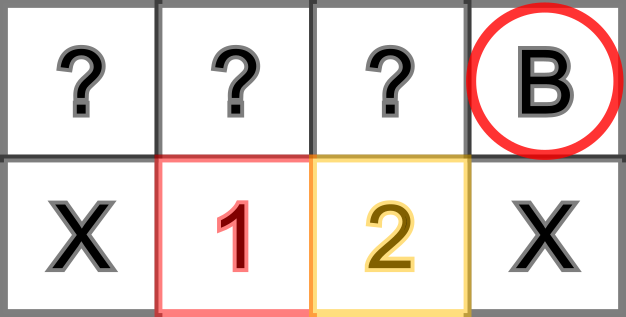 Whenever a 1 and a 2 are next to each other in a row, the tile above the X is a bomb. This is because there can only be one bomb in all tiles that are touched by the 1, but there have to be two bombs adjacent to the 2. The only solution for this is to have one of the bombs in range of the 2 but outside the range of the 1.

The 1-2-X pattern can be applied from both sides to solve more difficult situations.

Another common pattern is the 1-1-X border pattern: 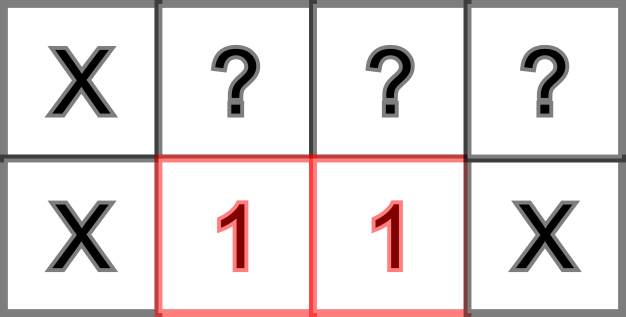 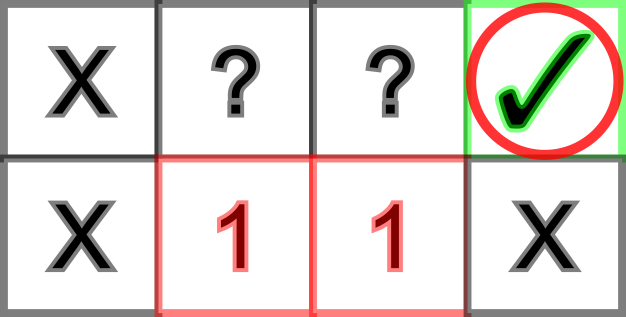 In this case, the bomb that the 1 on the border is pointing to is constrained to only two tiles. The next 1 in the row has to point to the same bomb, because it also touches all of these tiles. This means that the last tile that it touches must be safe.

If the second 1 is on a corner, then this pattern also wraps around the corner, since all tiles that the second 1 (but not the first 1) touches must be safe. 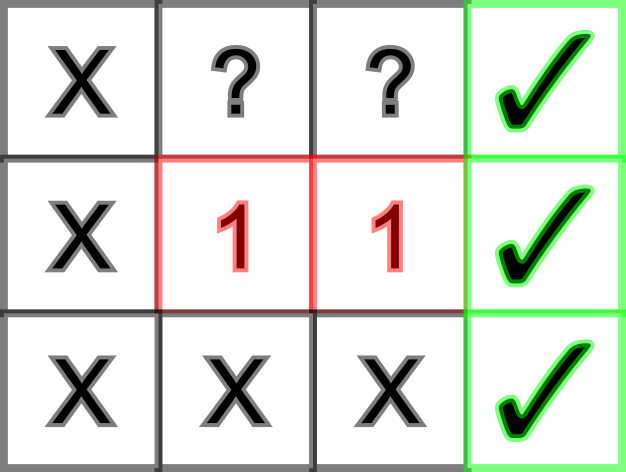 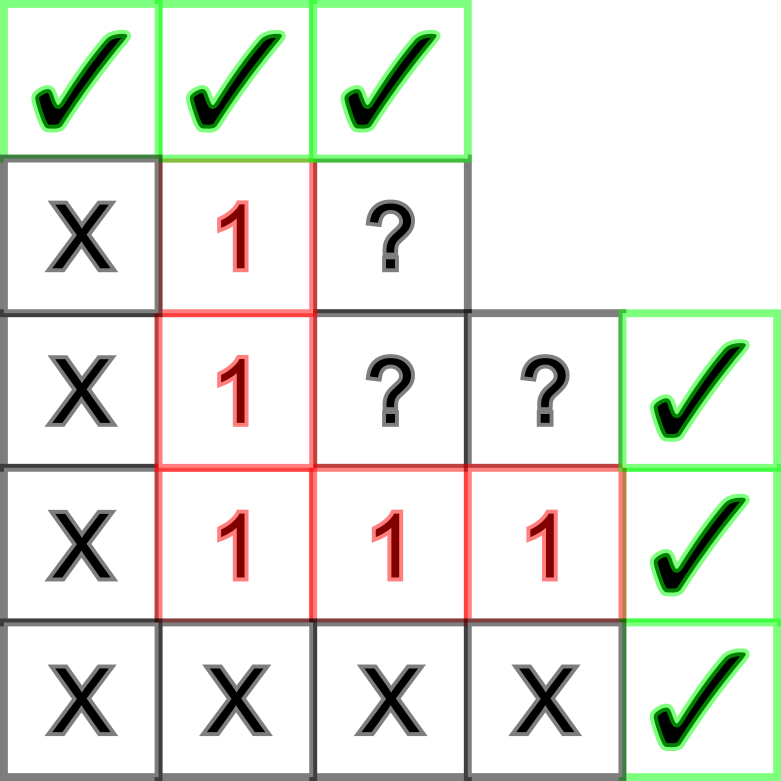 This kind of logic can be extended to many more situations. Constraints can also help you to find bombs: 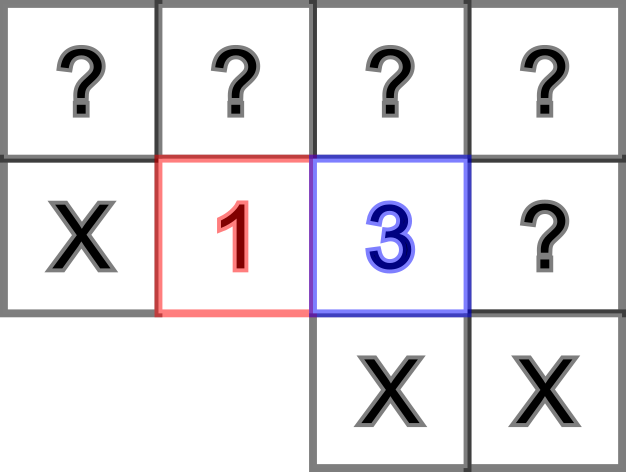 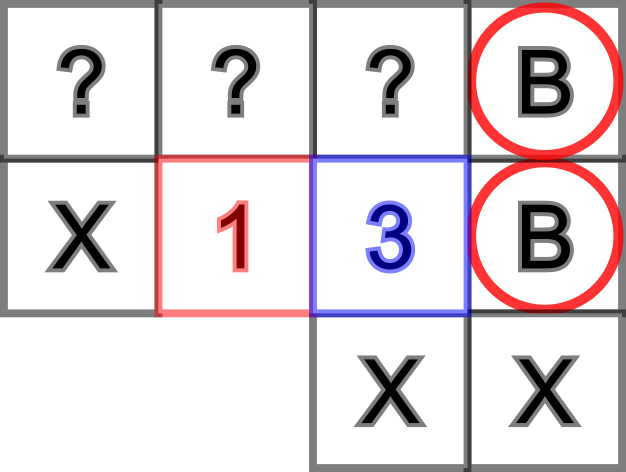 In this case, the bomb that the 1 is pointing to is again constrained to two tiles. This means that the other two bombs of the 3 have to be in the only two available tiles that are not touched by the 1.

These are some of the most common patterns, which can be combined through reduction and repeated application to solve even very complex board states.

Because you are controlling an avatar, and because this avatar cannot move diagonally, pattern matching can give you information that is currently useless. The 1-2-X pattern frequently predicts bombs in diagonal tiles that you cannot walk to. You could still flag these tiles, as the information might come into play later.

Sometimes, you just have to guess. There are many factors that go into making an educated guess:

In traditional minesweeper, it is a common practice to guess from the sides of the boards. This is obviously not an option here. However, you are massively helped by the fact that you don’t have to clear the entire board, only get to the exit tile. This means that you can dodge many situations by taking an alternative path before you would have to guess.