All eyes techniques in Naruto to Boruto: Shinobi Striker and how to get them. 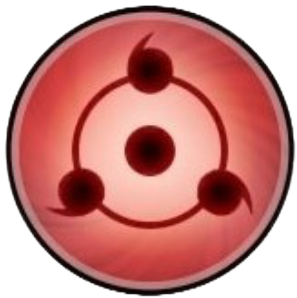 Unlock:
Complete level 3 training with Kakashi Hatake
“An eye Jutsu that can hypnotize and copy. This puts the user into Sharingan mode, where they can prevent just about any jutsu once.”

Properties
Sharingan makes the player activate their Sharingan genjutsu for roughly 8 seconds. If the user is hit within that time, they automatically use a Substitution Jutsu without using their gauge. If the user gets hit during the execution of a ninjutsu, like Rasen-Rampage, the player will automatically use the substitution and the execution of the jutsu will be stopped. 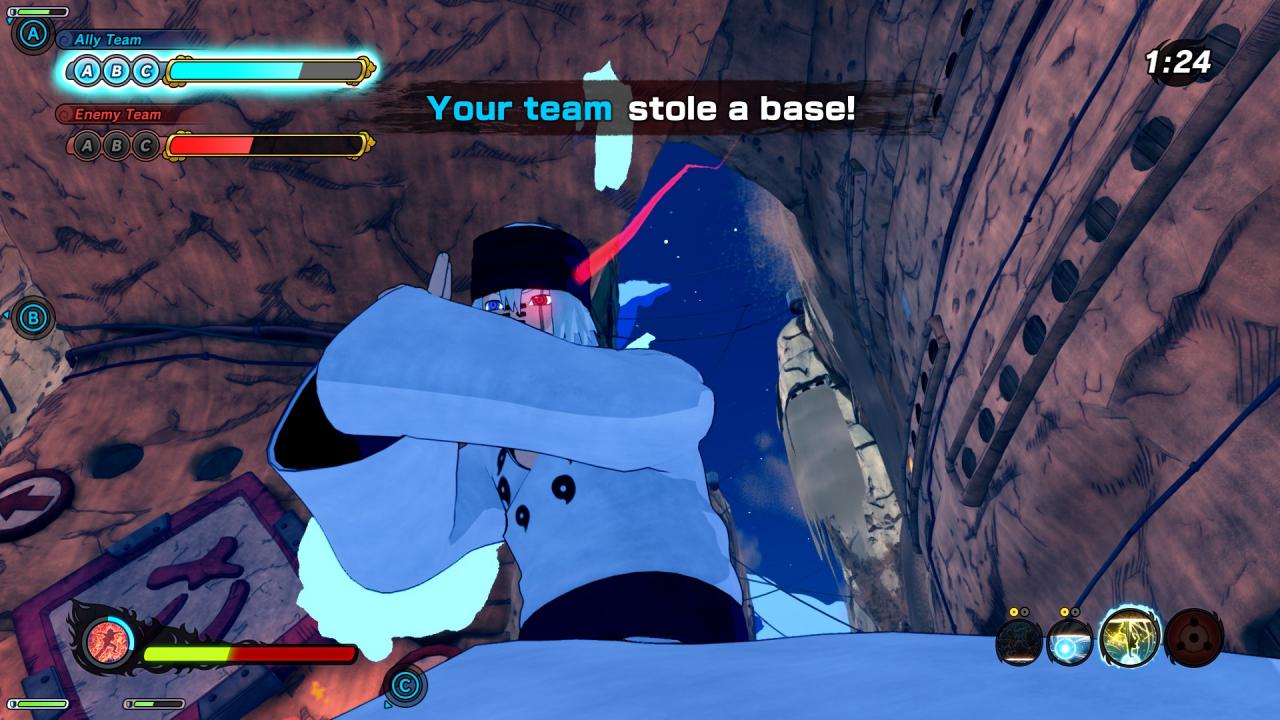 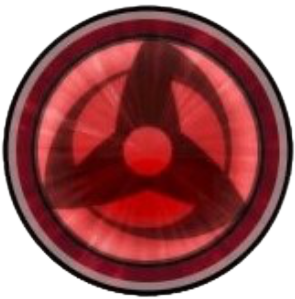 Unlock:
Complete level 5 training with Kakashi Hatake
“An ability that can teleport any object the user gazes at into an alternate dimension. It can teleport other enemies within range of the target as well, knocking them out and making it impossible for them to be revived.”

Properties
Kamui has the player use their Mangekyo Sharingan to activate Kamui, an invisible sphere of energy that can instantly kill anyone inside it, unable to be resurrected by Mitotic Regeneration, Six Paths Chakra: Rebirth or Six Paths: Massive Rasen Shuriken. Kills players cloaked in Kamui Climax and Kamui Bond.

Can be activated only on ground and need to see the enemy to hit them, like Amaterasu. 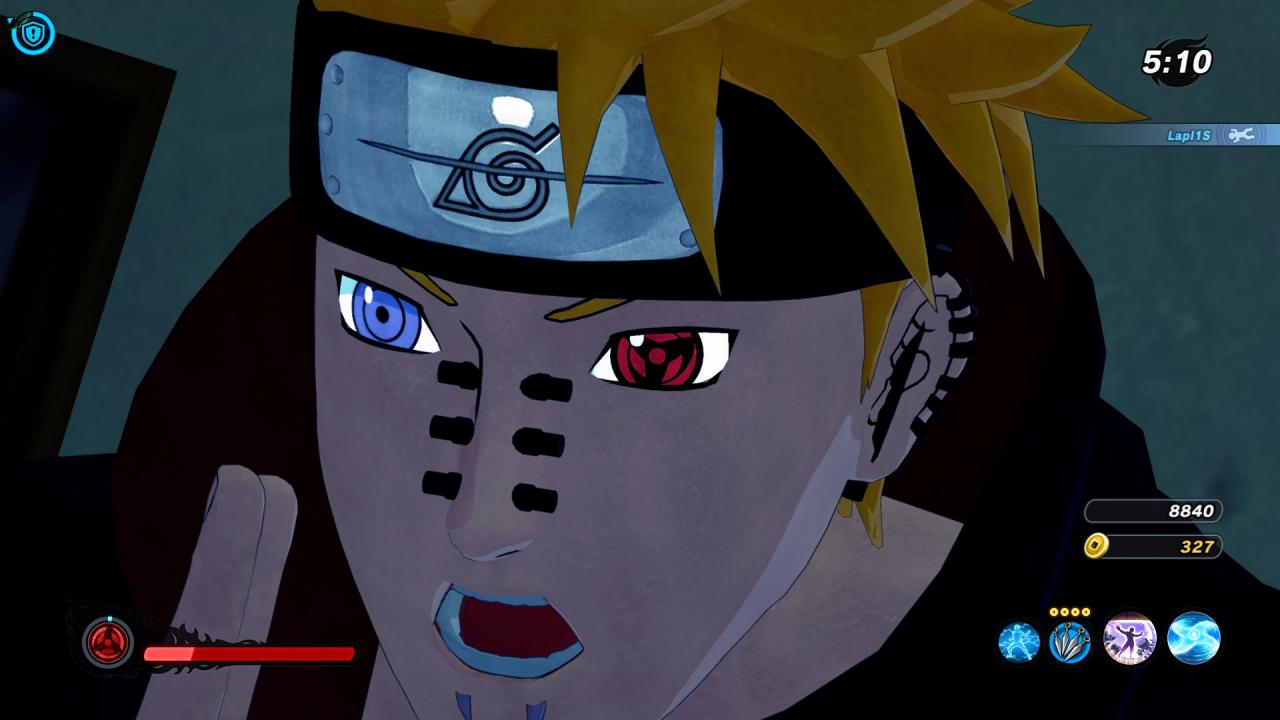 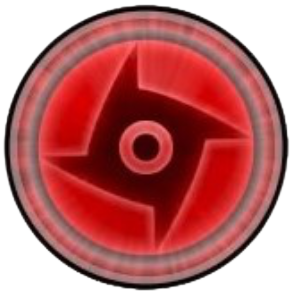 Unlock:
Complete level 5 training with Shisui Uchiha
“A Genjutsu from Mangekyo Sharingan. Places all allies in a Sharingan state, protecting them from most enemy ninjutsu. An additional command activates Koto Amatsukami Zanko confusing all enemies on the battlefield with illusions.”

Properties
Koto Amatsukami starts with the user entering the original Sharingan state, which will automatically use a Substitution Jutsu without a stock. This allows all allies to evade enemy attacks for a whole 15 seconds.

Additional input will actiivate Zanko which will reverse the opponent’s controls for 10 seconds, and imprint a translucent screen of Shisui’s Mangekyo Sharingan over the HUD. Activating Zanko after 15 second will not extend the duration of substitution effect, so players will be hit during Zanko in this case.

If the player activates it while an enemy already has activated it, it will cancel enemy’s Koto Amatsukami and a clear full moon will appear behind the player instead of the moon with Shisui’s Sharingan.

Will not defend from Vapor Style: Solid Fog Jutsu. 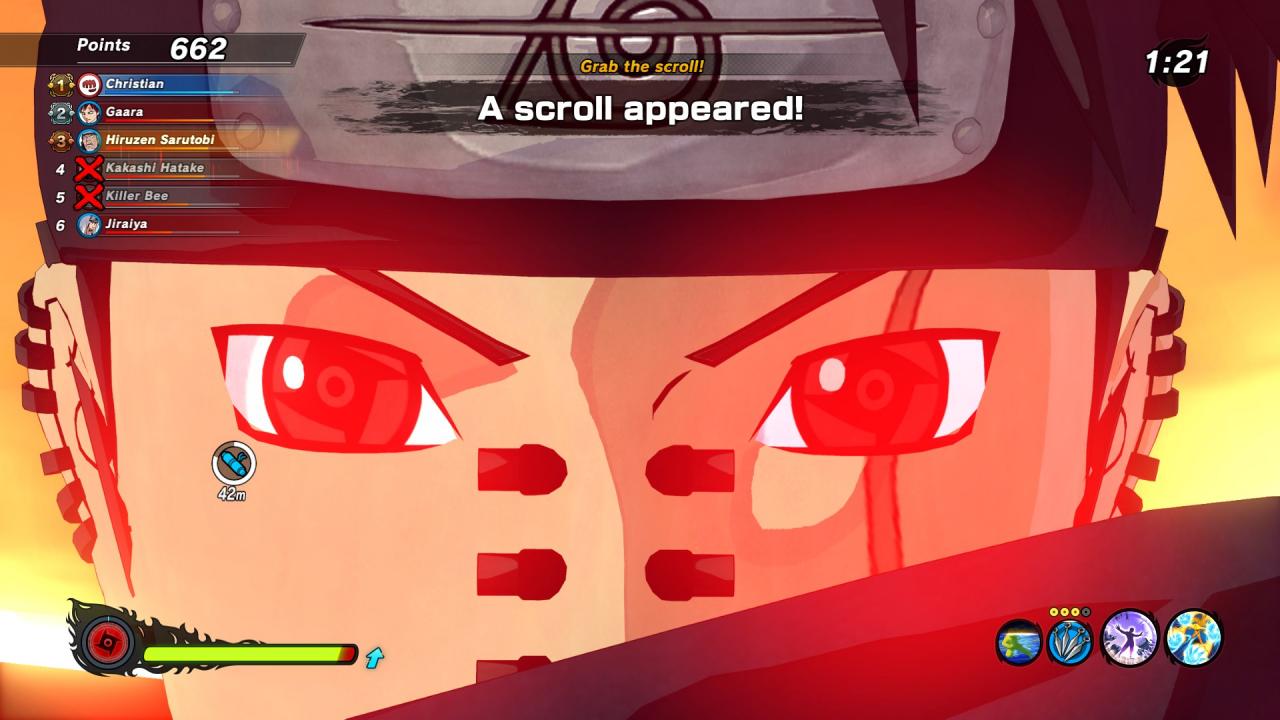 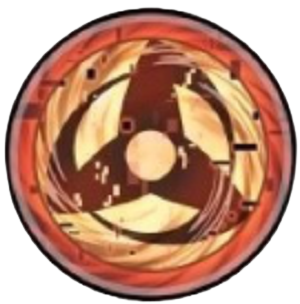 Properties
Kamui Bond has the player activate their Mangekyo Sharingan, making them invincible for 5 seconds when they are not attacking, and the above abilities last another 3 seconds.

The user can still be hit by Kamui, Kamui Shuriken, Kamui Lightning Blade, Inferno Style: Flame Lightning, and another player in Kamui Bond or Kamui Climax;the user will still be affected by Universal Pull and Heavenly Hand Power.

It can stop burn damage, debuff from Heavy Boulder Jutsu, but will also stop Chakra boost from In-Battle Scrolls(other type of scrolls won’t be affected) and buff from ally’s Kurama Link Mode if buff is already on during activation. 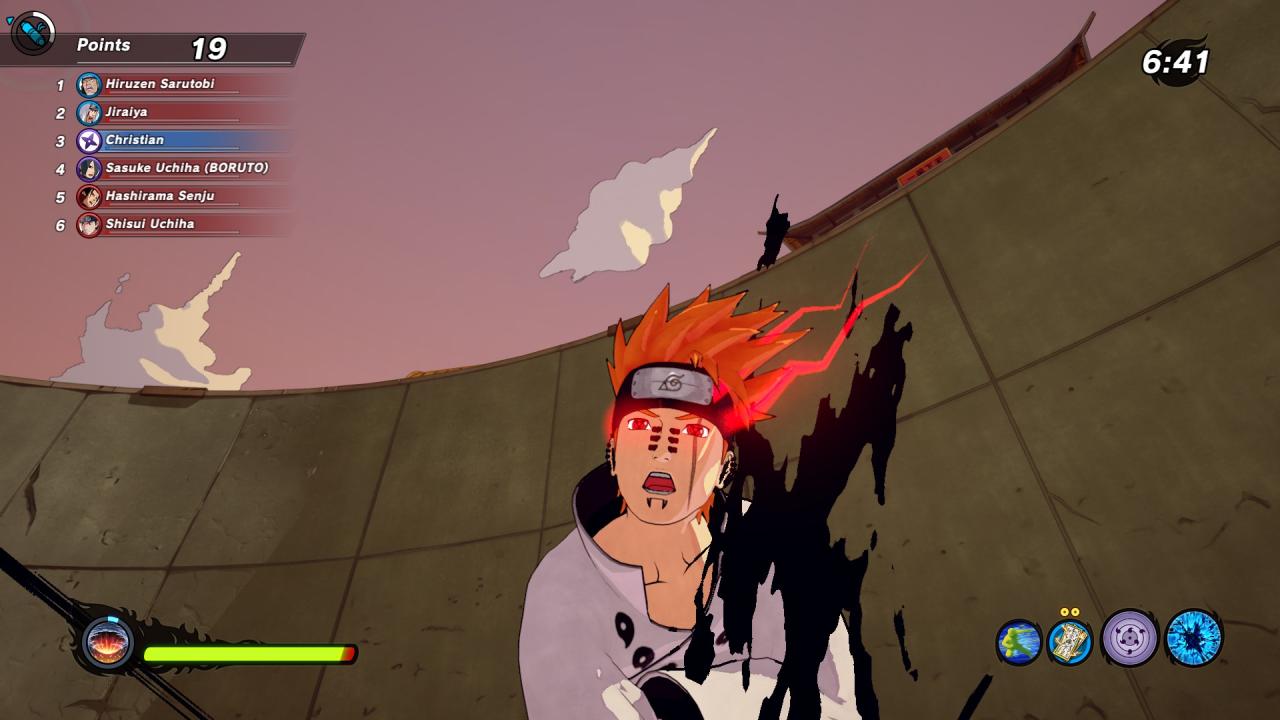 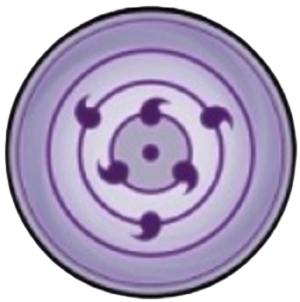 Unlock:
Complete level 4 training with Sasuke Uchiha (BORUTO)
“A visual jutsu activated by the Rinnegan that lets the user instantaneously switch with any space of their choosing. When targeting an enemy, the user will immediately switch places with that enemy.”

Properties
Heavenly Hand Power has the user pause for a moment, then activate the move. The user then instantly switches places with an enemy. This can only be done when locked on to an enemy. The move will not work if the enemy is not in plain sight, or if used against a boss. Fog created by the Hidden Mist Jutsu will not prevent the use of this move if the user is also within it. 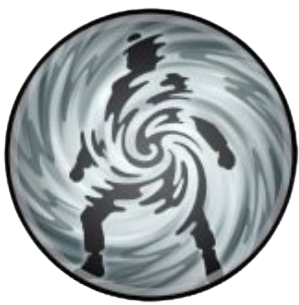 Unlock:
Complete level 4 training with Obito Uchiha
“A Visual Jutsu where you utilize Mangekyo Sharingan to nullify enemy attacks as long as you aren’t attacking. Additionally, it increases Attack Power.”

Properties
Kamui Climax activates the user’s Rinnegan for 5 seconds. During this time, they not only get 1.5x attack power for all moves, but all enemy attacks are rendered useless if the user is not attacking; applies to standing, running and jumping.

The user can still be hit by Kamui, Kamui Shuriken, Kamui Lightning Blade , Inferno Style: Flame Lightning, and another player in Kamui Bond or Kamui Climax;the user will still be affected by Universal Pull and Heavenly Hand Power.

It can stop burn damage and, unlike Kamui Bond ,will not stop Chakra boost from In-Battle Scrolls. 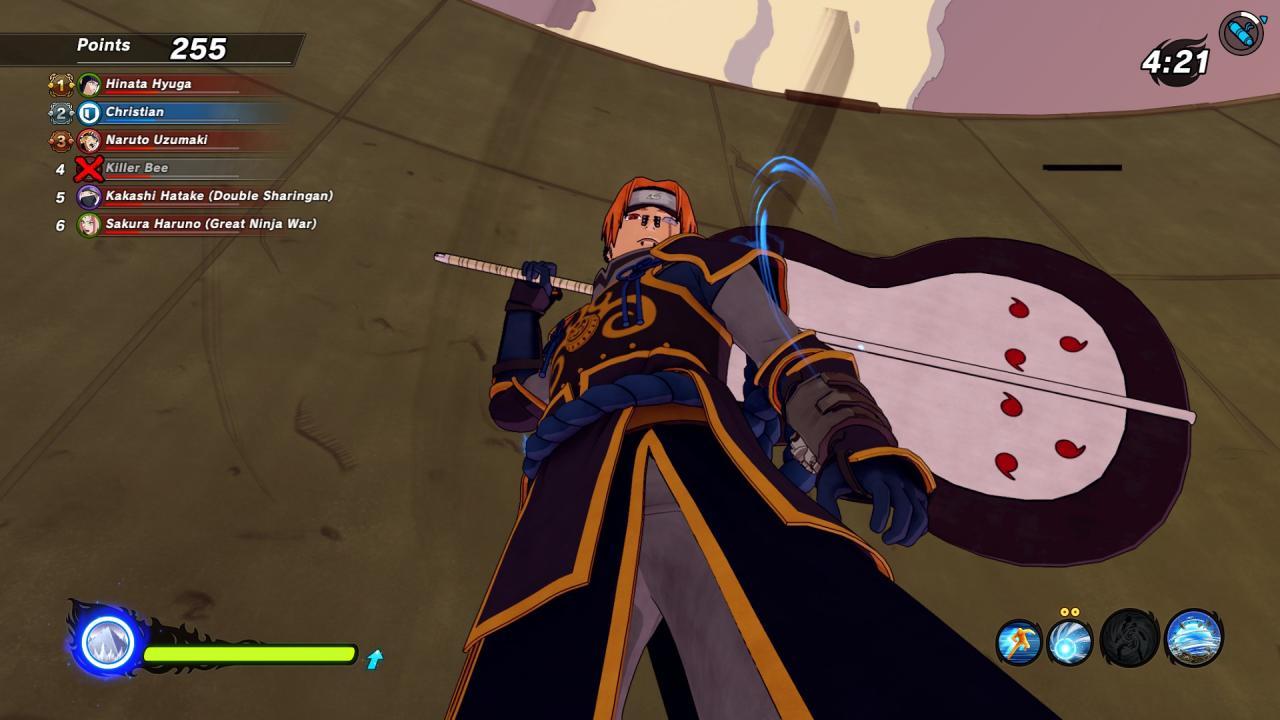 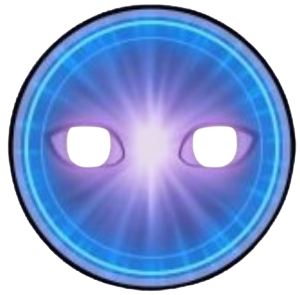 Unlock:
Complete level 3 training with Hinata Hyuga
“A visual jutsu that grants clairvoyance and penetrating sight, allowing the user and their teammates to see through things and locate enemies. It also boosts attack power and the recovery of the user.”

Properties
Byakugan activates “the user’s” Byakugan for about 10 seconds. During this time, they not only get to see the outlines of the players (blue for allies, red for enemies), but they get to have a 1.5x attack boost and recover quickly from attacks.

Shows enemy cloaked in Chikushodo but won’t let lock on. 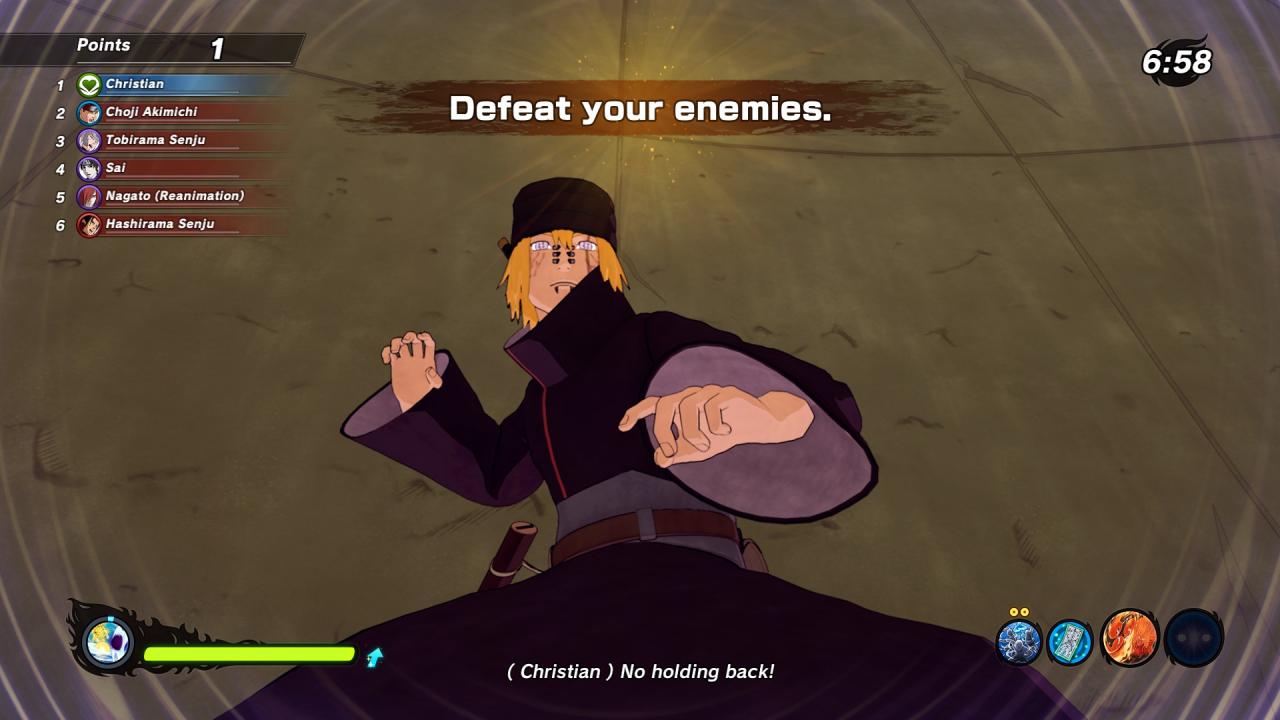 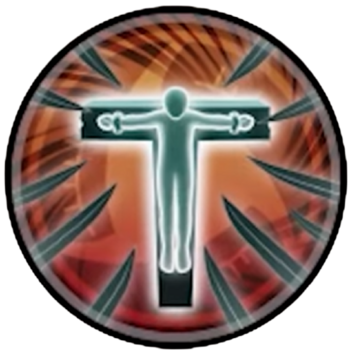 Unlock:
Complete level 2 training with Itachi (Reanimated)
“A Genjutsu that restrains a single enemy and stabs them with a sword, dealing damage. It also reduces enemy attack power, attack speed, and attack-tracking speed.”

Properties
The user casts a Genjutsu that instantly stops a target in their tracks, creating an illusion where they are put on a cross and stabbed with spikes into their middle before dropping to the ground. On impact, it lowers the affected target’s attack power for 10 seconds.

This jutsu can be charged and used in the air. The opponent will remain in the air if the move connects while they are still airborne.

If the opponent gets attacked by anything except a light attack before the spikes hit, the move’s effect will not occur. 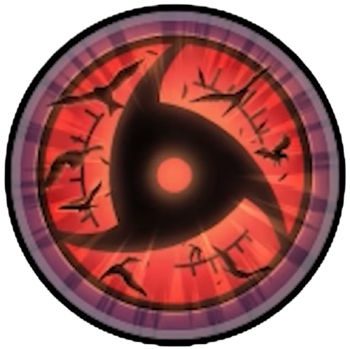 Properties
The user casts a genjutsu where after 10 seconds the first effect automatically is activated and enemies will return to their position from that amount of time ago and resets their ninjutsu; this also includes any negative effects on them during those few seconds; this also applies to allies and any positive effects, such as speed or attack boosts. The returning of positions does not apply to the caster.

Additional manual input blinds all enemies and revives any recently deceased allies, but blocks use of the user’s Ninjutsu and also obscures the left side of the screen for 8 seconds. The second activation only occurs when the first loop starts.

This technique ends after the user inputs the additional command, or after a further 10 seconds have passed. 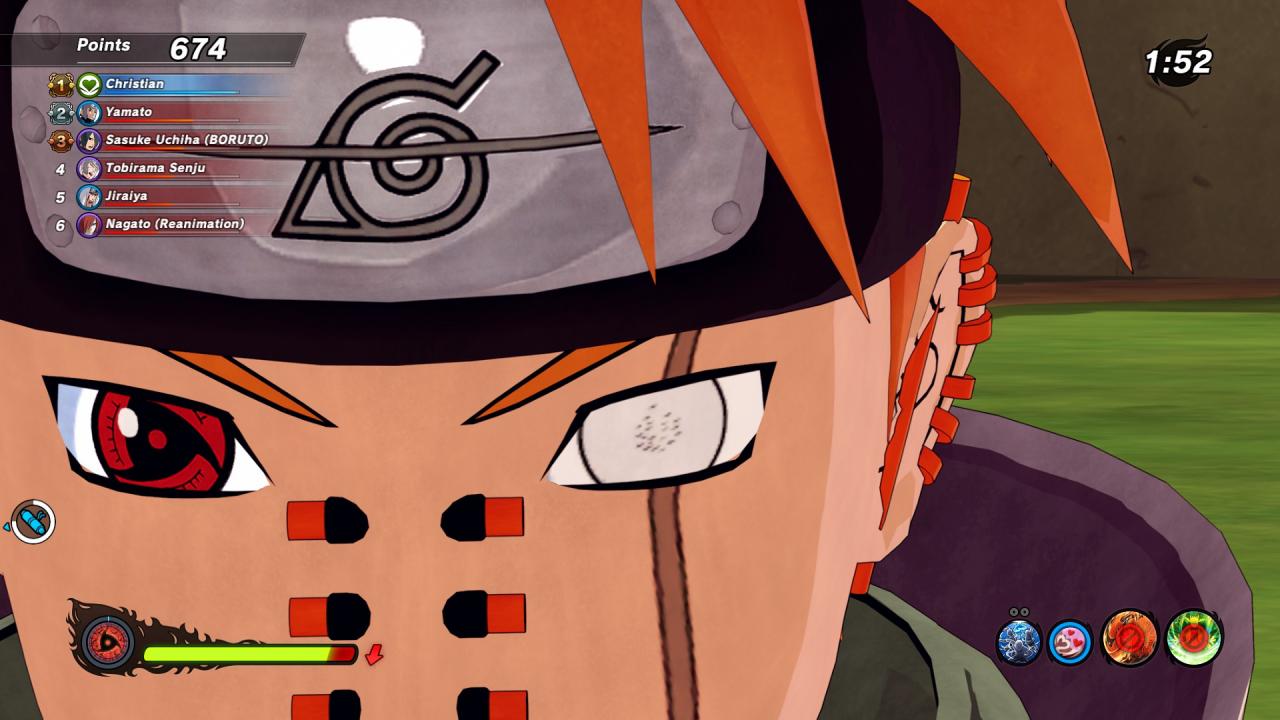 Some screenshots from game 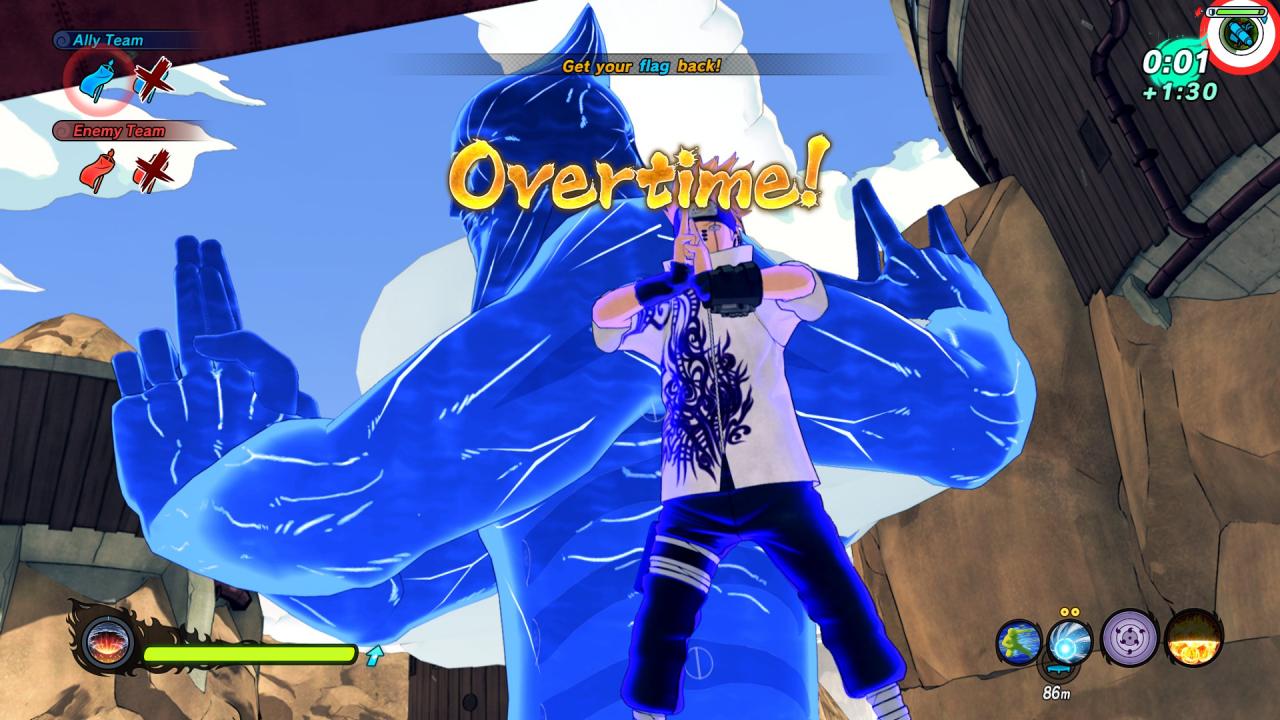 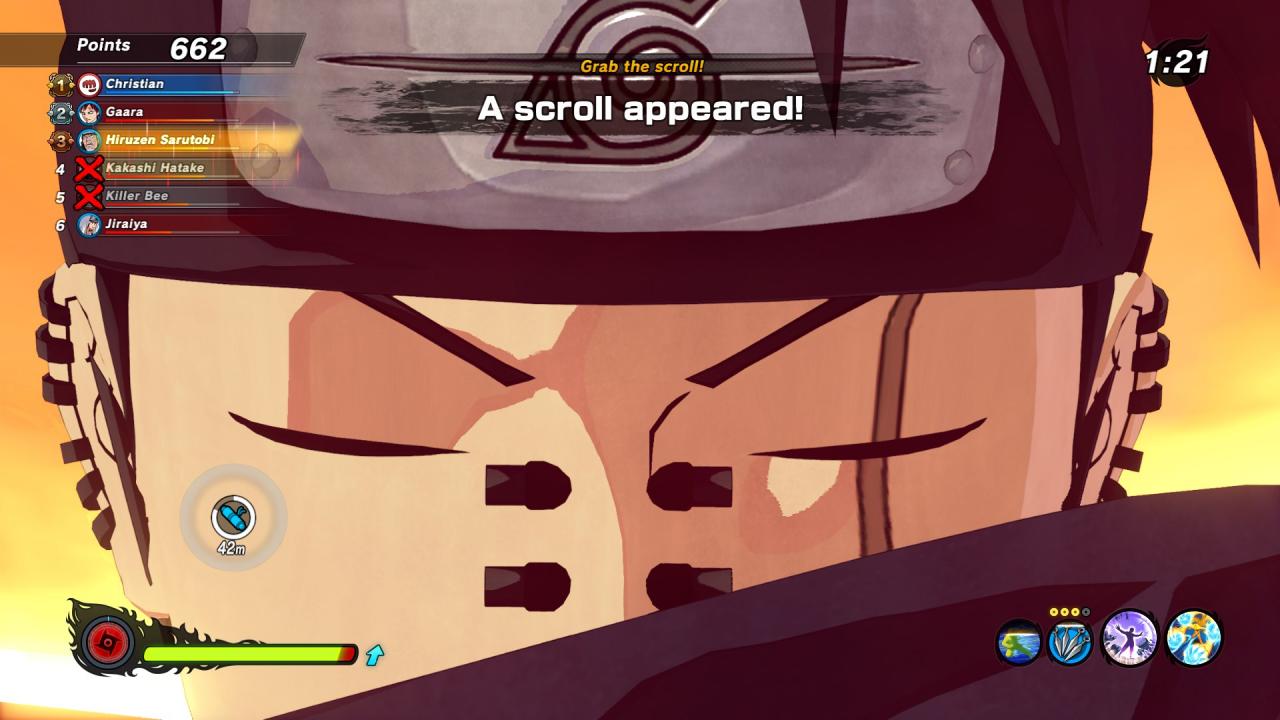 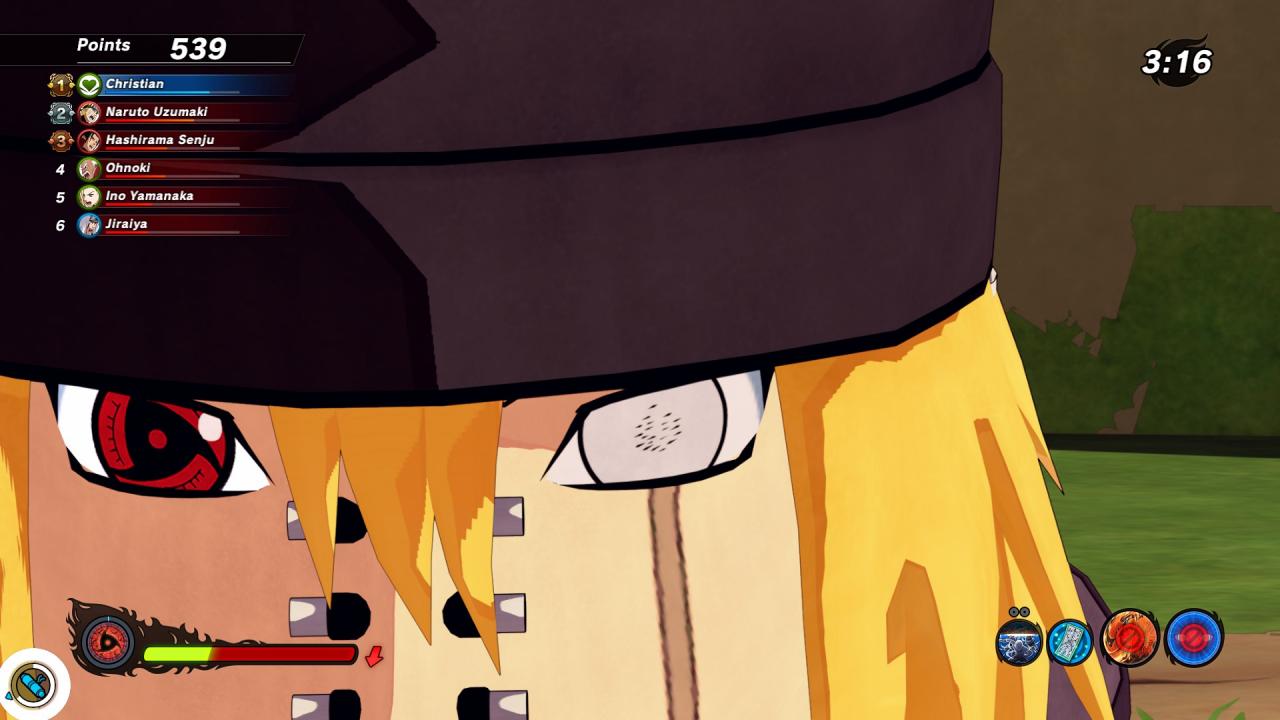 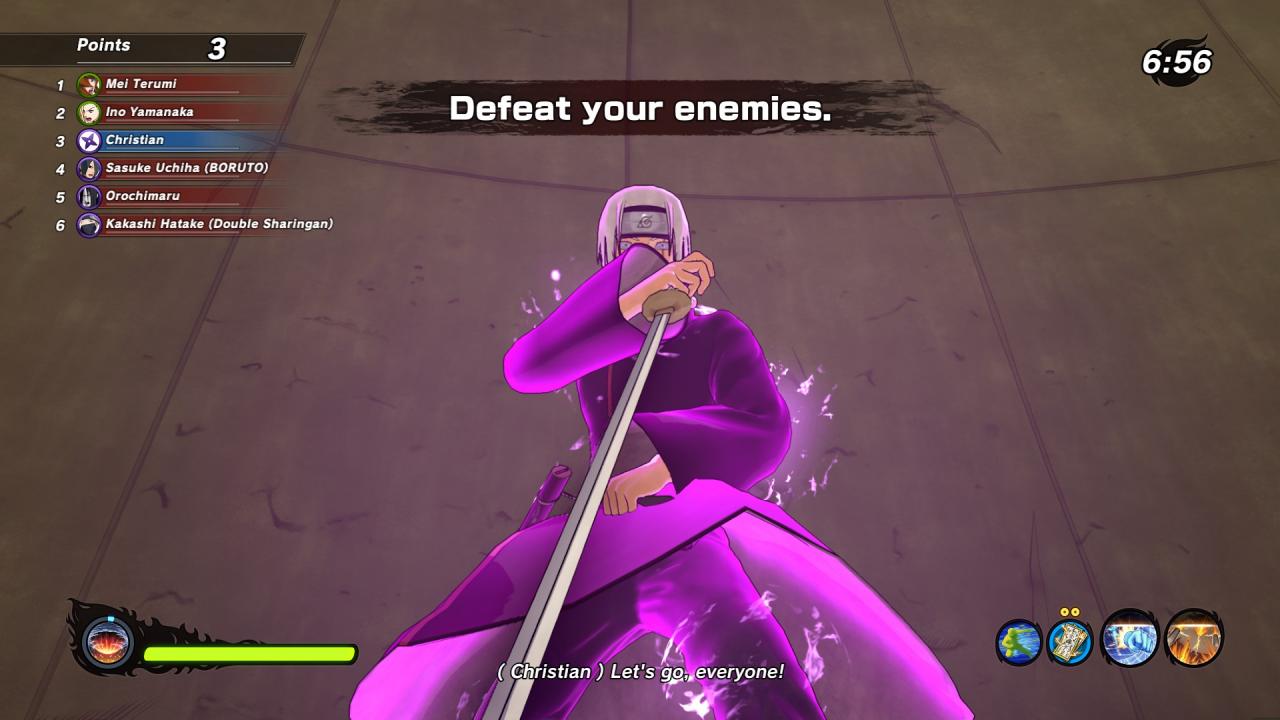 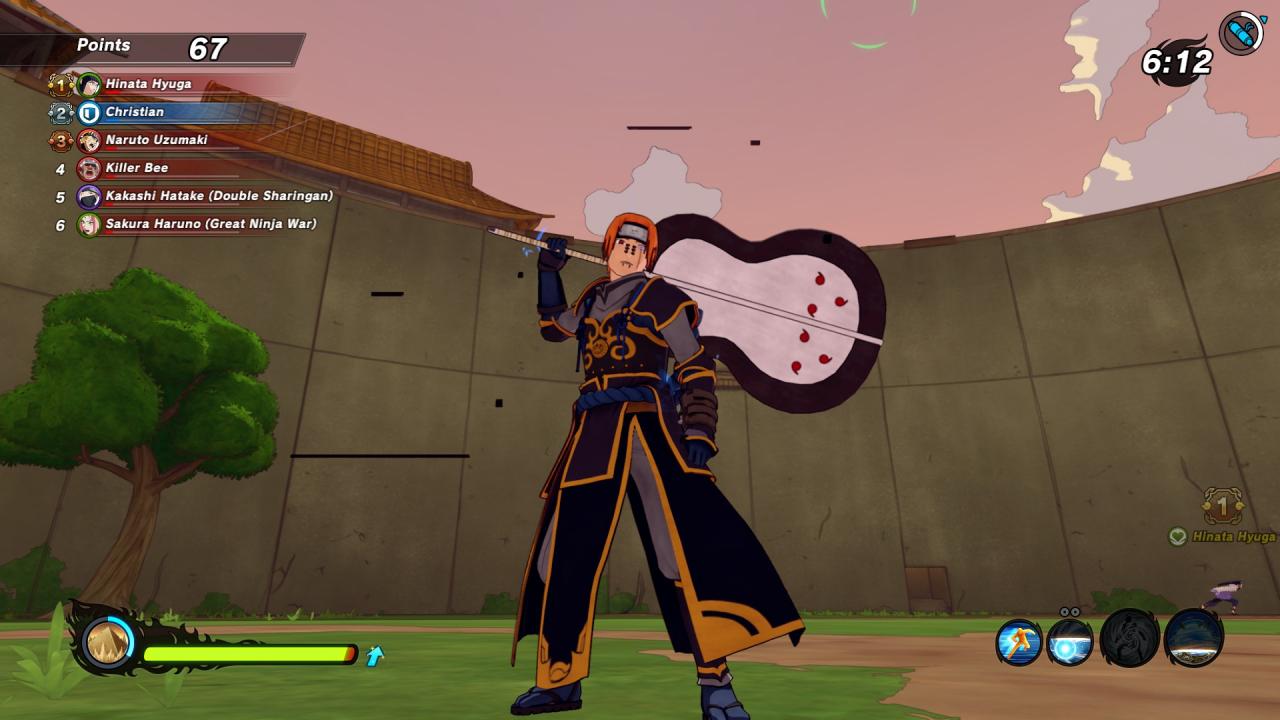