There’s a guide to the first section of the game (where resources are limited and grinding is impossible before the first big optional challenge). Basically just to get you started off right if you prefer more guidance! No real spoilers aside from mentioning a few names.

The first section of the game has no repeatable fights and limited resources before you face several challenges. You can stumble through easily enough… but if you do everything right you’ll get a nice boost for the rest of the game! I won’t give unnecessary spoilers but this part will describe the first hour or so of the game.

1) When you get control go around Bangville and talk to everyone. Don’t worry about the stats you see on screen. Make sure to do the following: 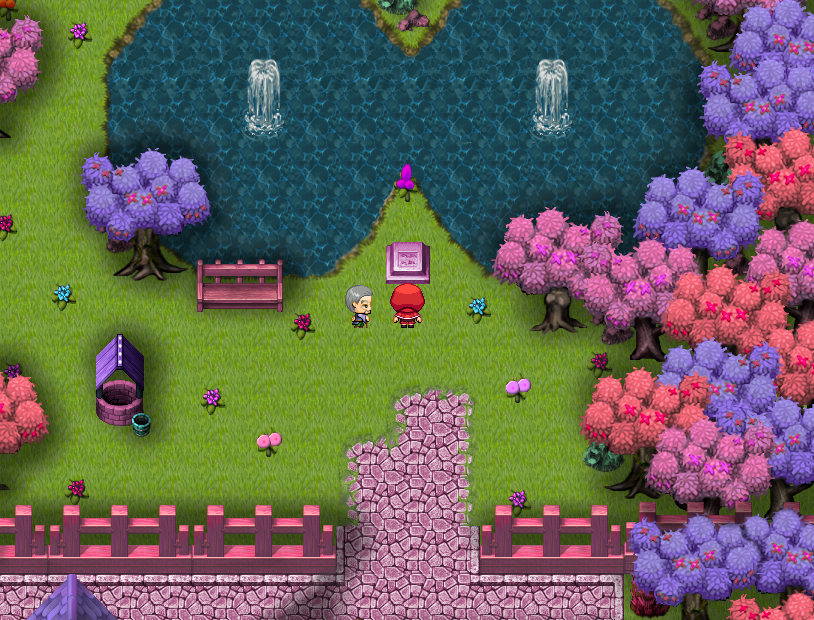 2) Once you’re done with all that, go to the park and see the event. Then go straight south through the forest until you reach the Peaceful Glade. Do the following BEFORE entering the bottom part of this map: 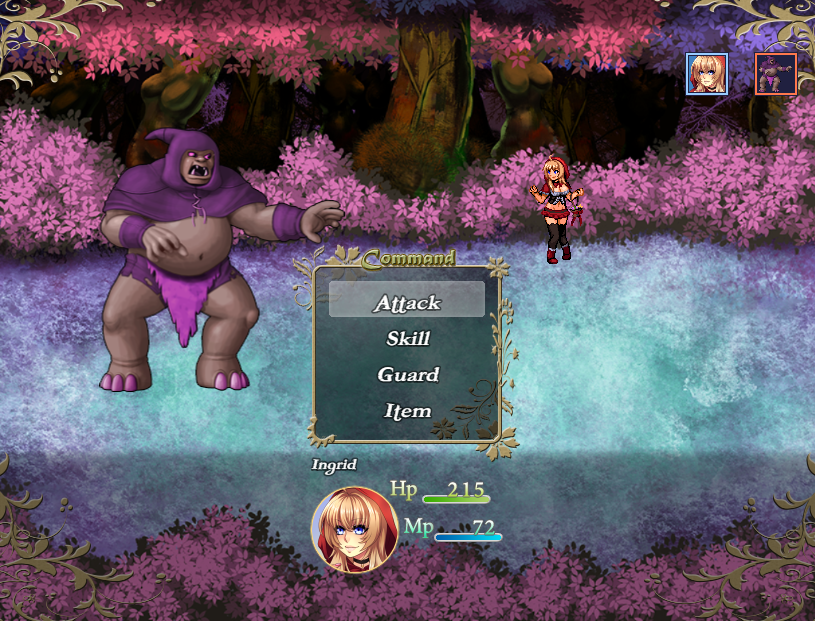 The Ingrid head marks the point of no return for this section: 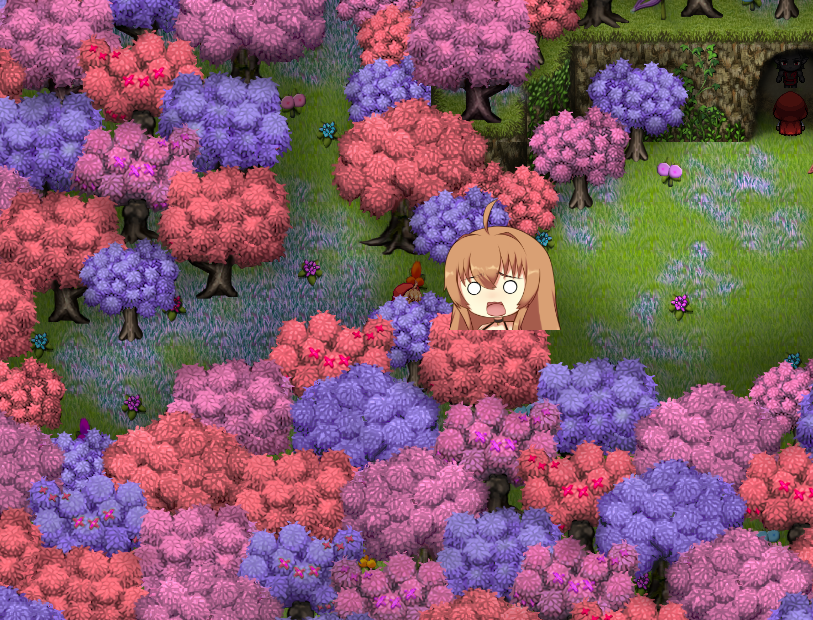 Point of No Return #1
Do all of the above before you enter the final clearing of the glade! Some of the above can be done later but some of it will be gone forever! You don’t need to worry about running back to heal if you’re missing MP: you will be fully healed after the next set of events.

3) Go south in the glade and watch events. For the solo fight just attack until your HP drops and events take over (defending will just waste time and you want to conserve your items). Once Hood joins you basically can’t lose. Eventually you will be alone again so make sure to do the following:

After some scenes you are a cave. Your general goal is to go east without dying using the limited resources you’ve gathered so far. Dodge enemies when possible and use items outside battle so enemies aren’t hitting you. If you can save items that’s good… but it’s better to use them than to die early. 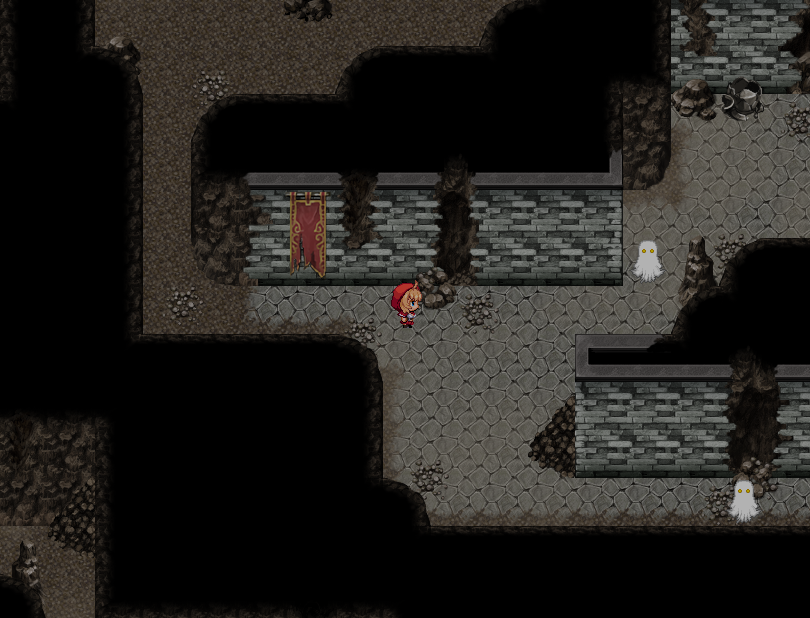 What you want to see: 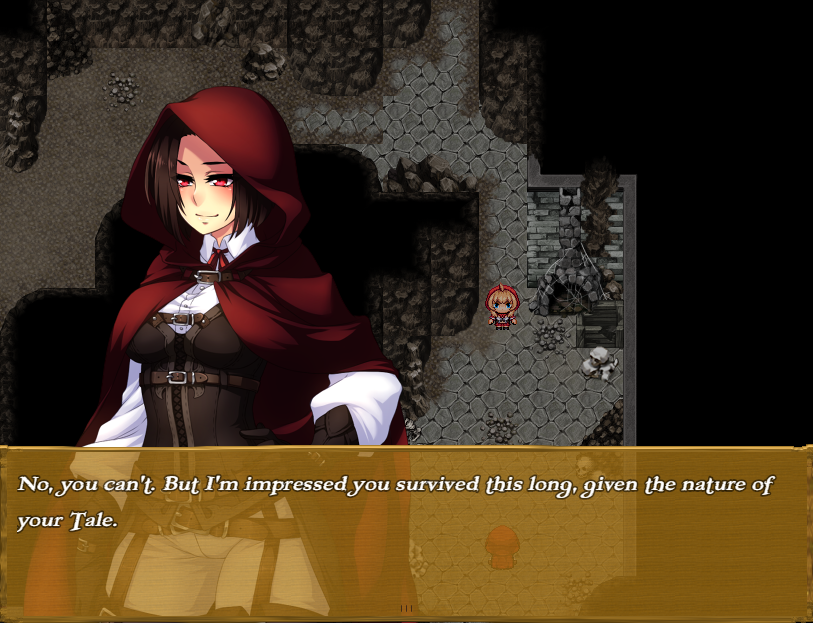 5) Hood can solo everything but should focus on the dangerous enemies while Ingrid kills spiders or Winks. Backtrack to the enemies you skipped before and they’ll be easy now. The rest of this dungeon should be fairly simple, just be sure to grab stuff: 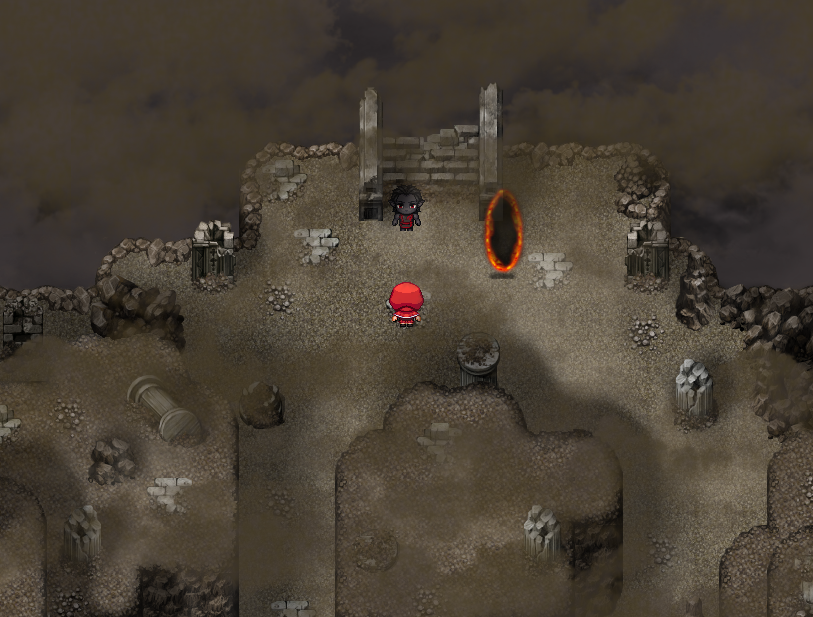 Point of No Return #2
Clear out all enemies and chests before you talk to Fenris and advance the plot. Skipping some won’t harm you but you want to get the chests and enough AP to buy a new skill later.

6) You’ve finished the introduction and you’re back in Bangville! If you did everything perfect, your save file should have -3 Corruption and 95 Intelligence. The forest is now unlocked, the town is updated, and there’s lots of new stuff to do: 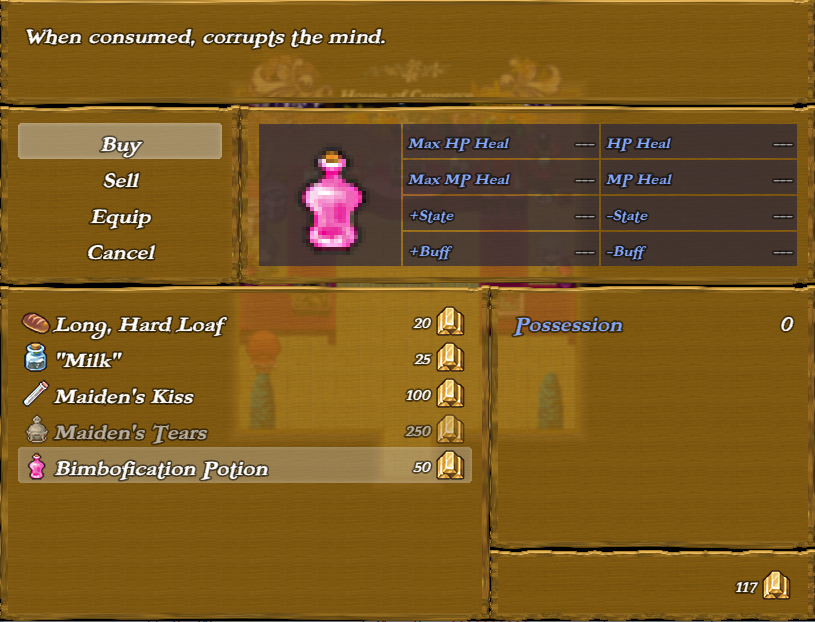 Shopping Suggestions: I recommend buying/using the Bimbofication Potion now, but it doesn’t help you fight and you can also get it later in the game. If you’re having a lot of trouble with the final wolf gauntlet there are two items that will improve your stats: the ♥♥♥♥♥’s Riding Hood and the Sexy Ring. You will later find two items called Virile Axes that can be harmlessly sold for more money. You can also spend money on more healing items but probably only “Milk” is worth it.

Screenshots of the sneakiest chests: 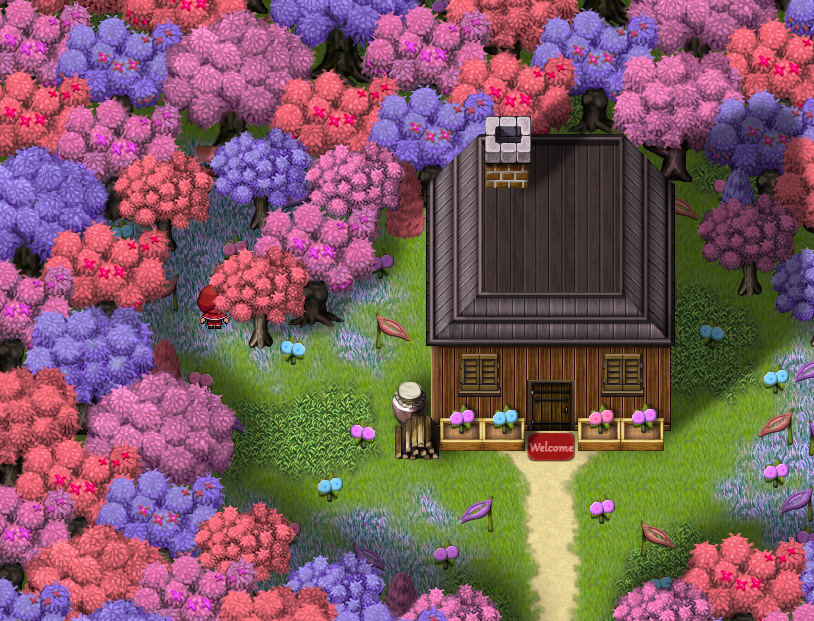 7) Go out into Bangville Woods and do more stuff:

This lady is pointing to where you need to go last: 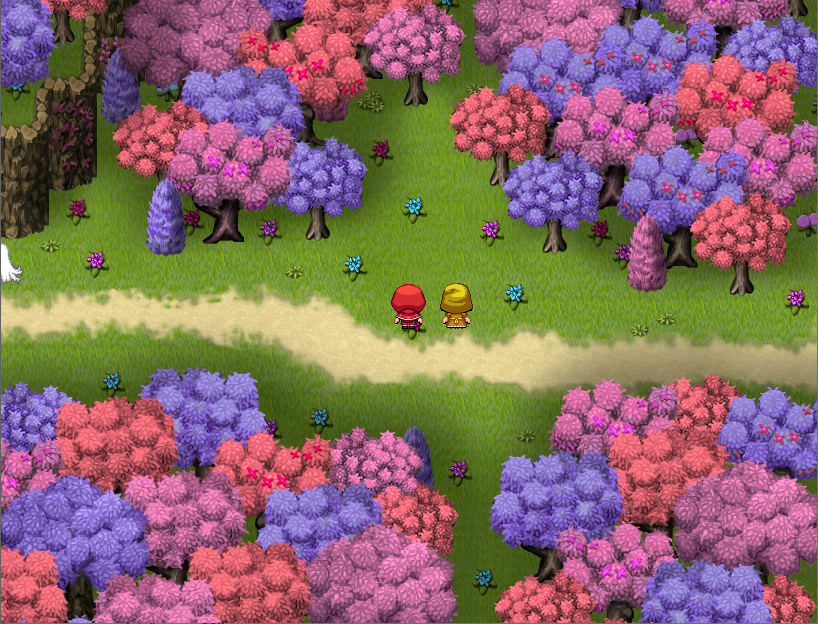 Point of No Return #3
Before you enter the portal you should have the following:

This is the big test of all your preparations! You need to face a series of fights with no saving allowed. There are four bone piles that have items but the important ones are the Tattered Hood (equip ASAP!) in the southeast and the Water in the northwest.

You need to learn the different wolf types even though they don’t have different names. The wolves looking straight on are standard attackers. The wolves with their heads lowered are relatively weak but cause poison that will drain you really fast. The wolves with red eyes are strongest but weirdly your last priority because they will spend turns charging (their charged attack is lethal but can be canceled with Wink). Most wolves should take one Violence + one normal attack to kill if you’ve done everything I said.

These are the fights:

You’re going to need good strategy to survive all these. Plan enemy HP so you don’t waste resources. Don’t go into a battle with too little MP. Cancel enemy charges before they get a second turn. Try to heal only in between fights. Spend items freely. Save a Maiden’s Kiss for AFTER the poison enemy fights or you’re dead. IMO the riskiest fight is #5 against three poison wolves. Other than that all I can say is good luck! 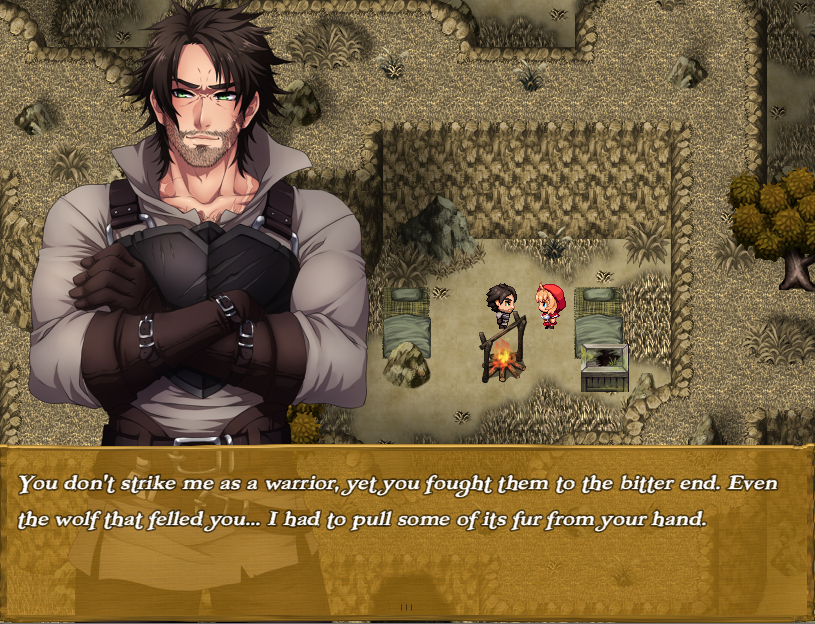 If you do all this you’ll be in a great position for the rest of the game. Corruption -16 and Intelligence 110 mean you can access more events in Hoodton early. Violence and Sexual Healing will be decent skills for a good while before getting replaced. The Scratched Bracer won’t be replaced by better accessories for a long time. The Pale Fur you got from reaching the last wolf will eventually turn into one of the best accessories in the game!