Here I will briefly explain what each modifier does so you don’t need to waste your time. I will write the names of modifiers in the same way as they are written in the game.

Top Down – View from above. The game will look like Hotline Miami. Pairs well with Weak Enemies and Weak Player modifiers. 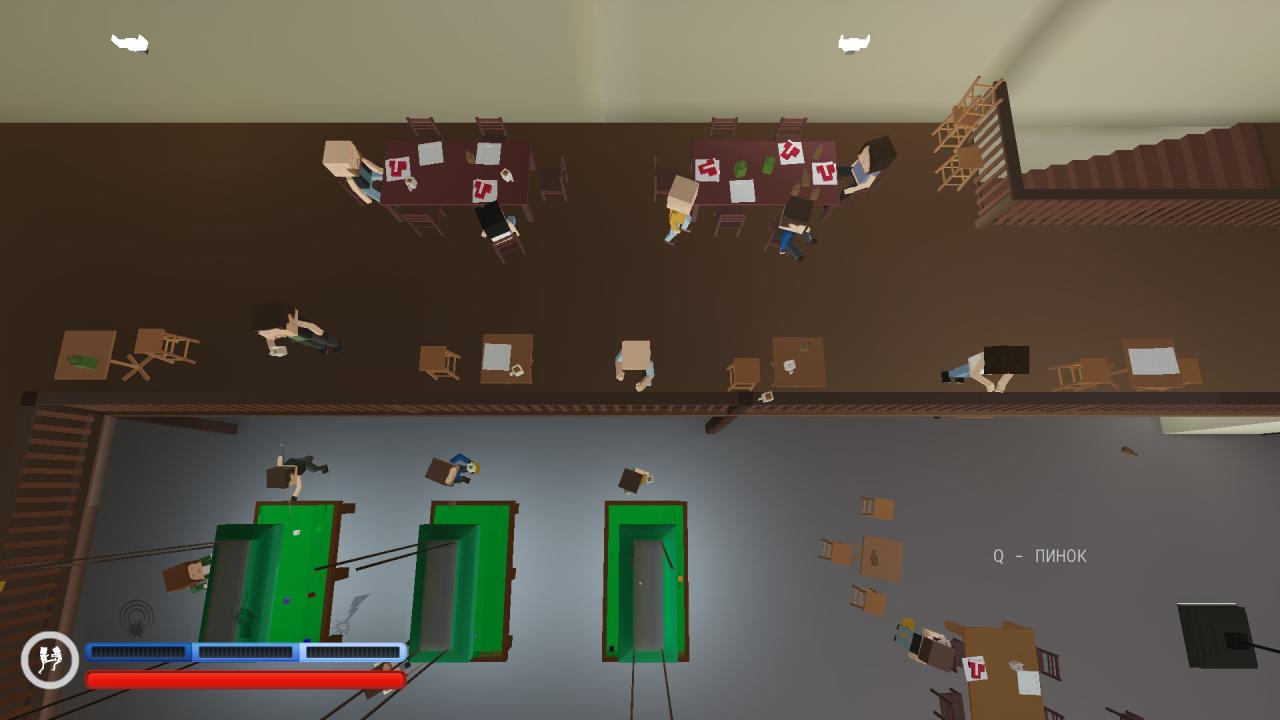 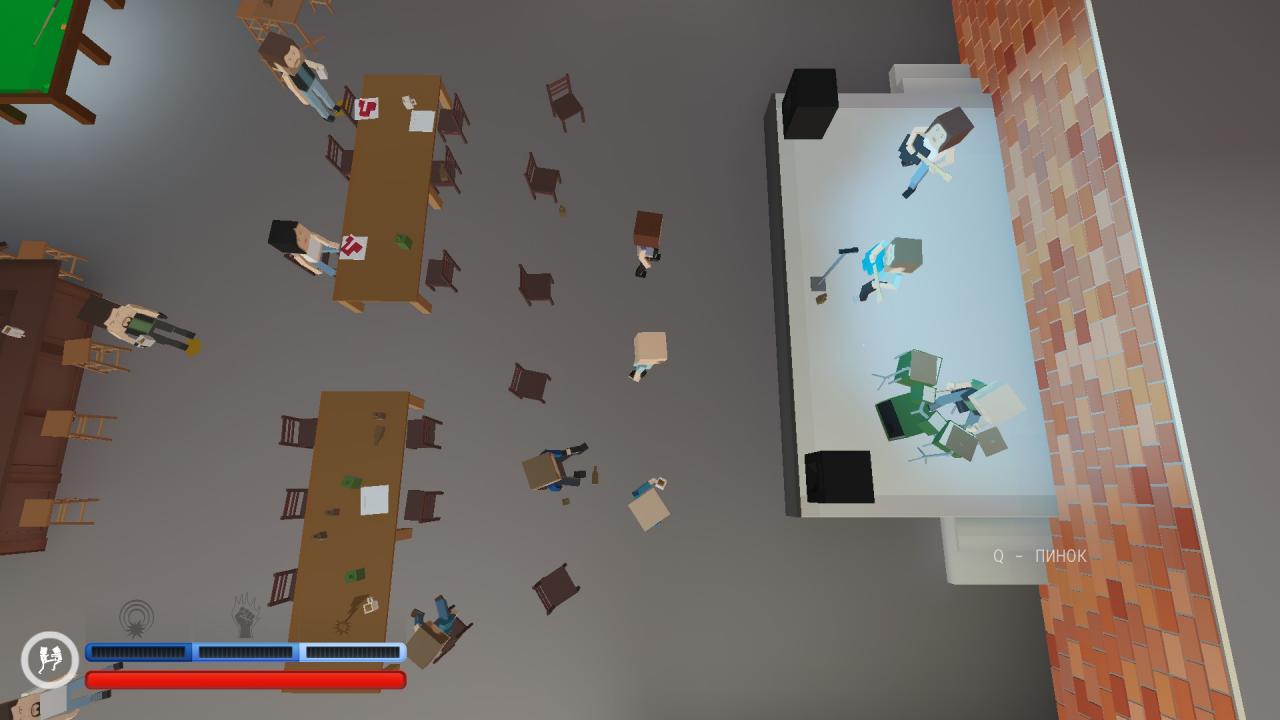 SUPERHOT – Modifier completely changes the style of the game. The game will become similar to SUPERHOT (hence the name of the modifier). Time moves only when you move. Enemies are marked in red and the player is in black. While you are in slow motion, it can be a little awkward to rotate the mouse. 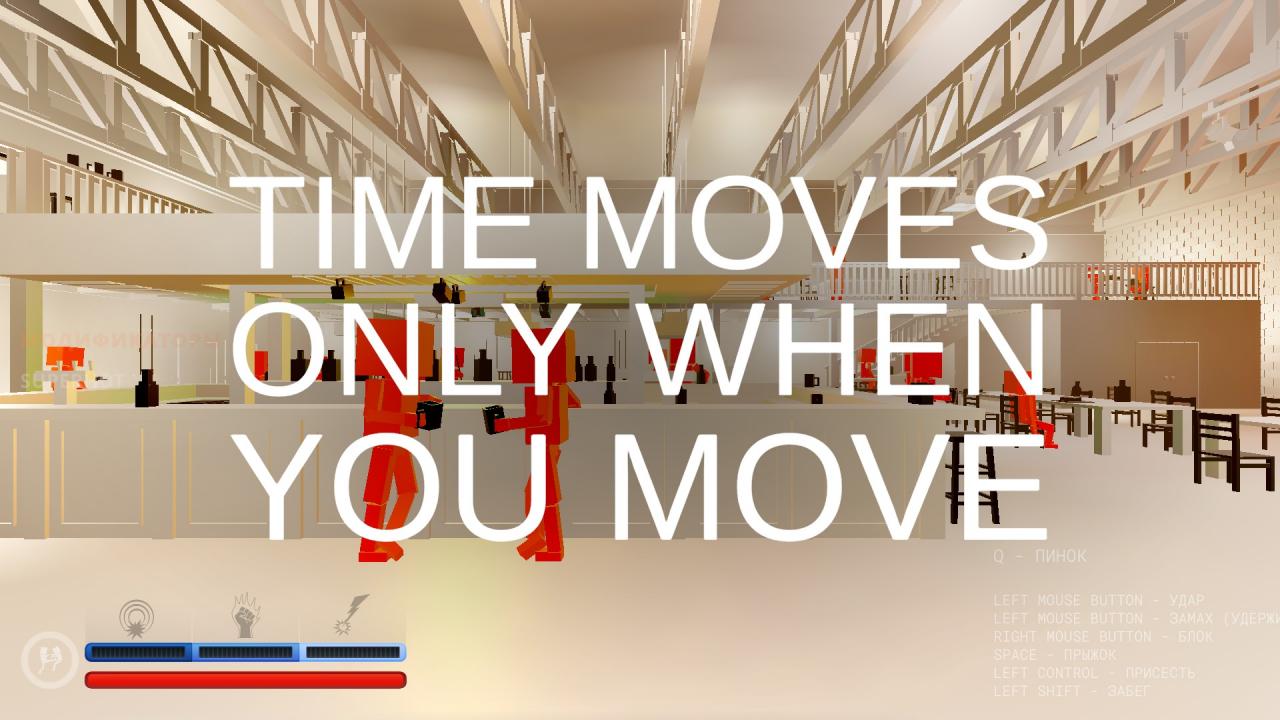 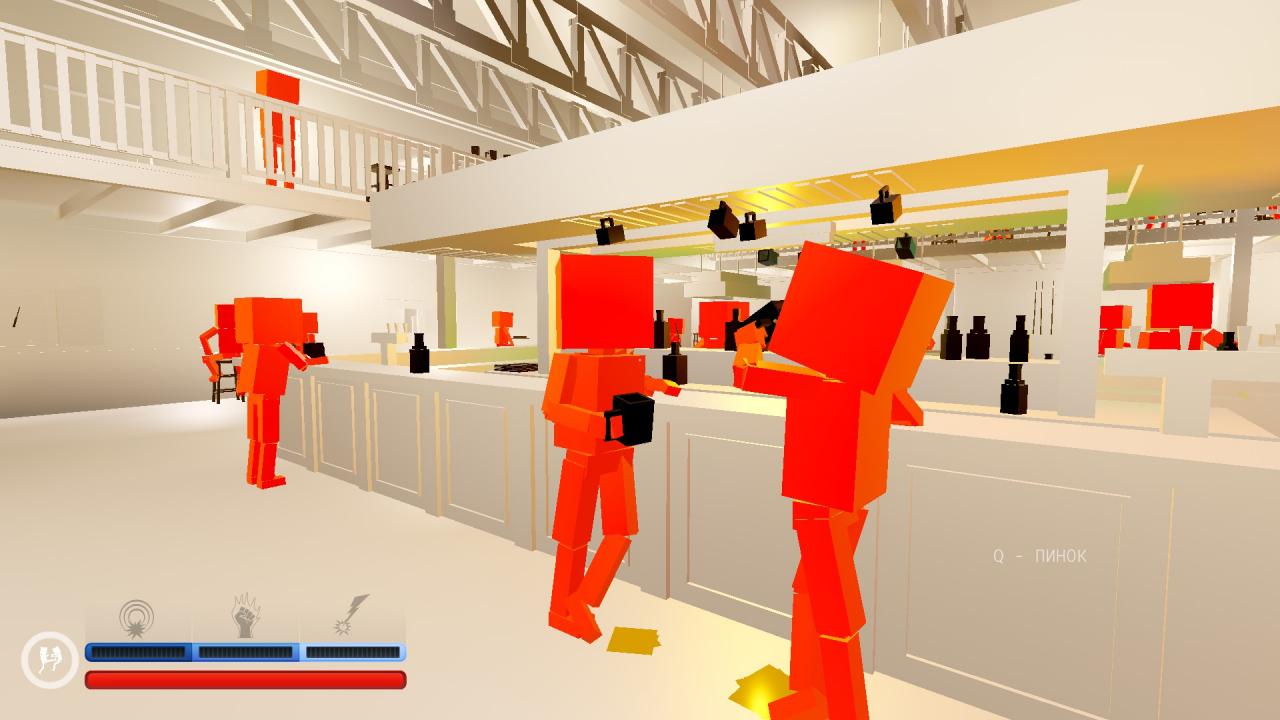 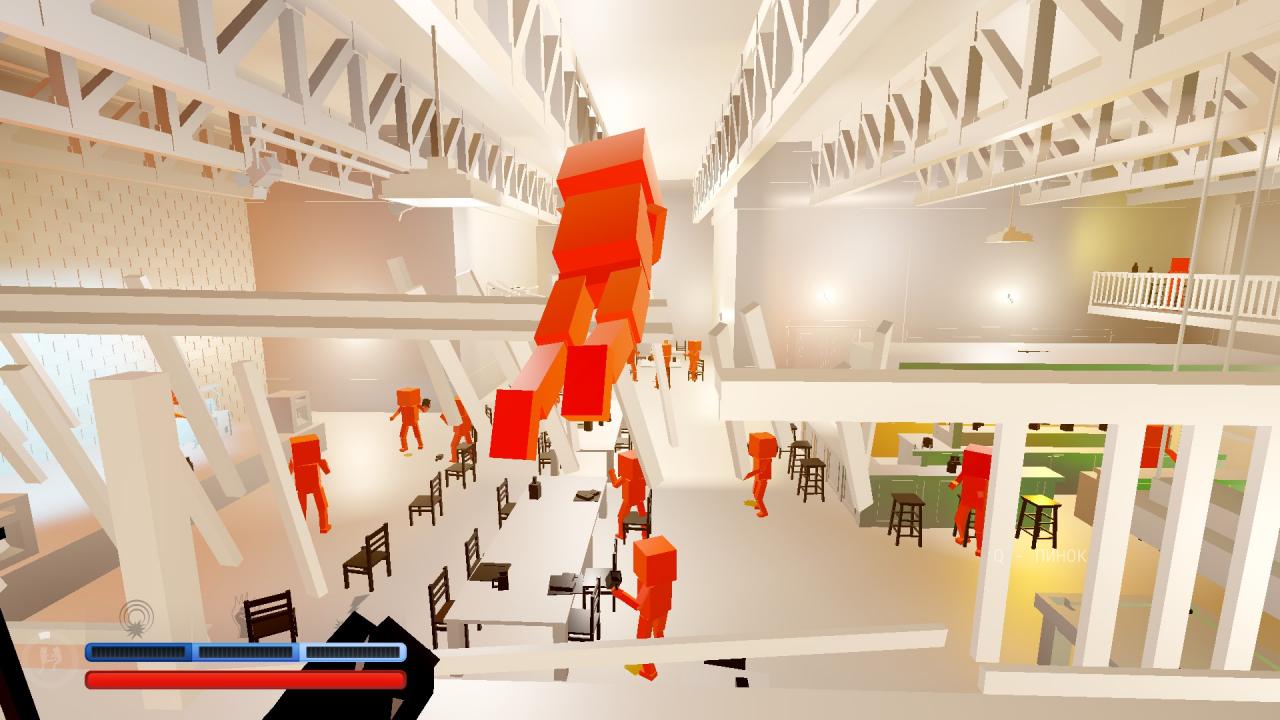 For comparison, here’s a screenshot of the original game: 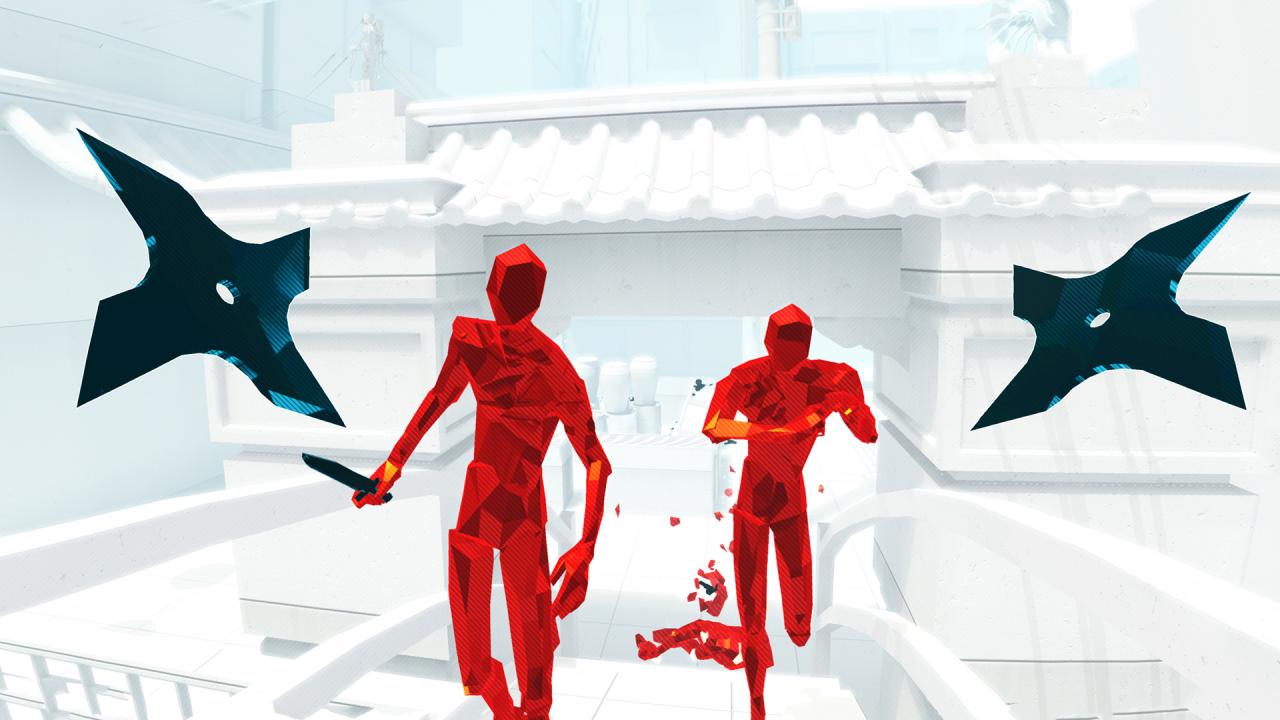 Random Friends – Random NPCs at the level will become your allies. Allies will have bright green emoticons above them.
Note: Accidentally hitting an ally (hitting, not killing) over all allies the smiley will change from cheerful green to yellow surprised. If you hit the ally again, then all your allies will be hostile to you. 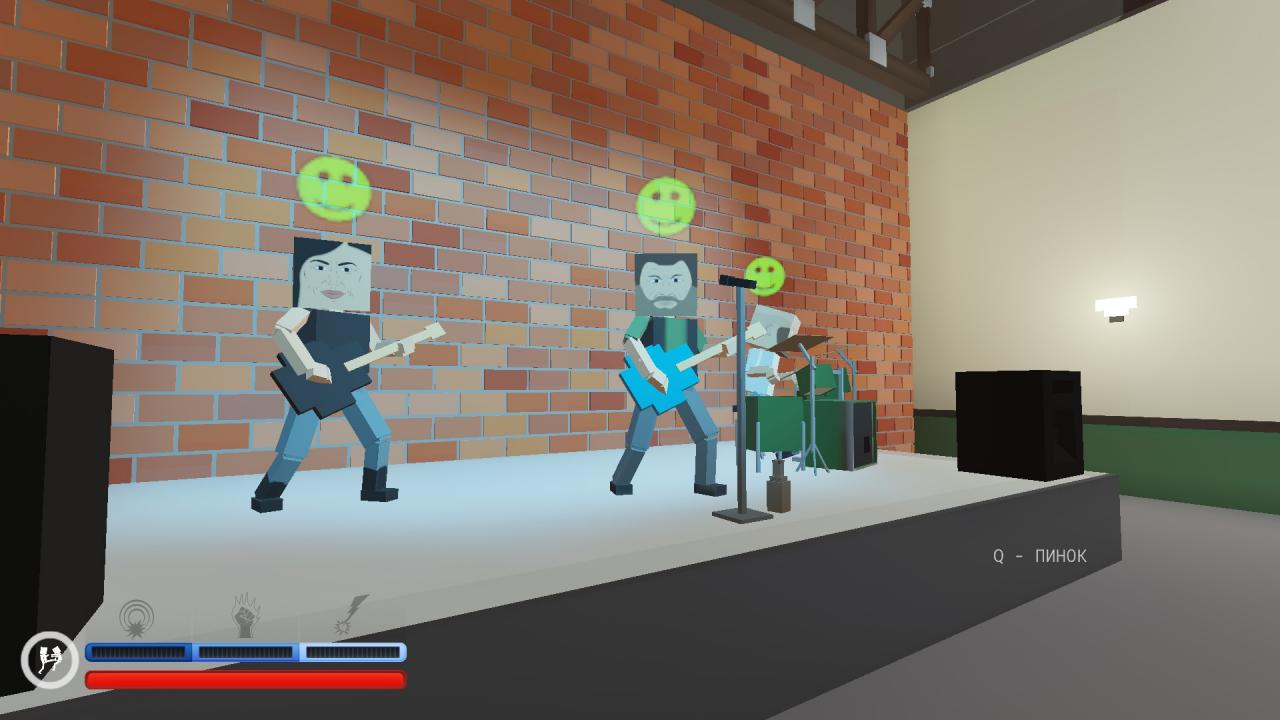 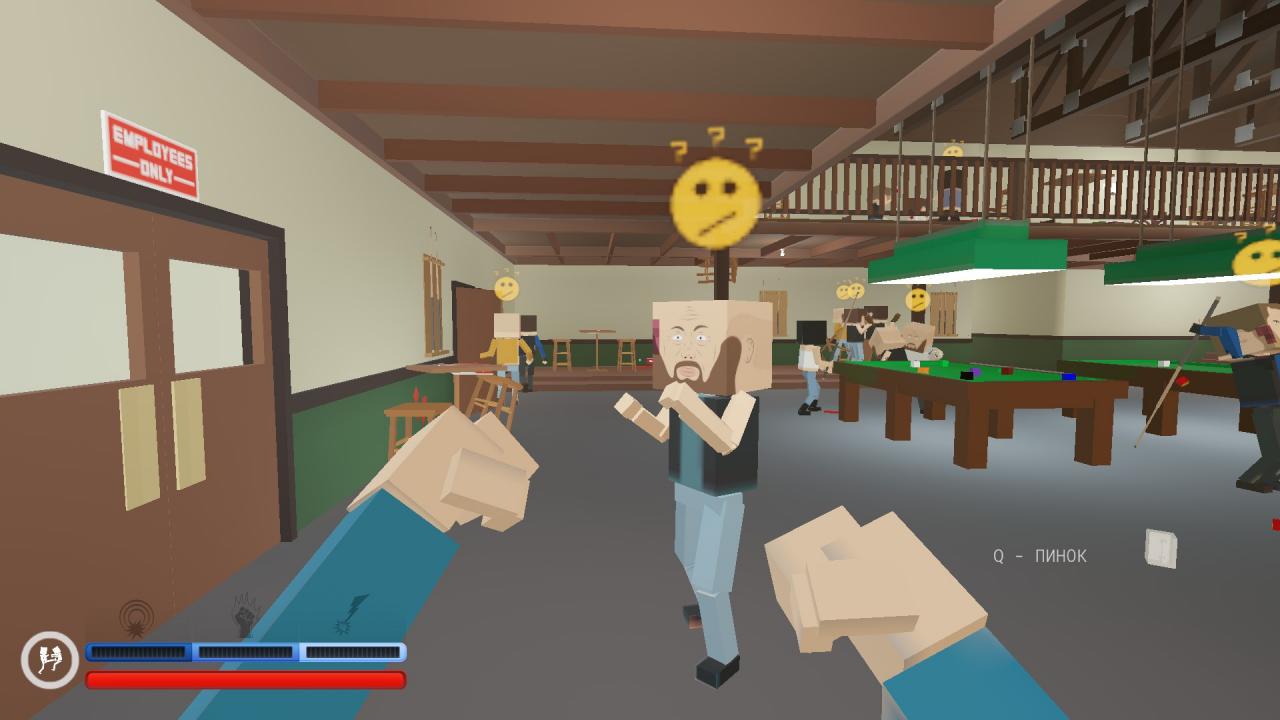 Lights Out – At the level, the lights will be turned off, and the only way to see something is the flashlight, which you have from the very beginning of the level. The flashlight does not shine far, and the viewing radius is so-so, so you can easily not see the enemy coming for your soul. 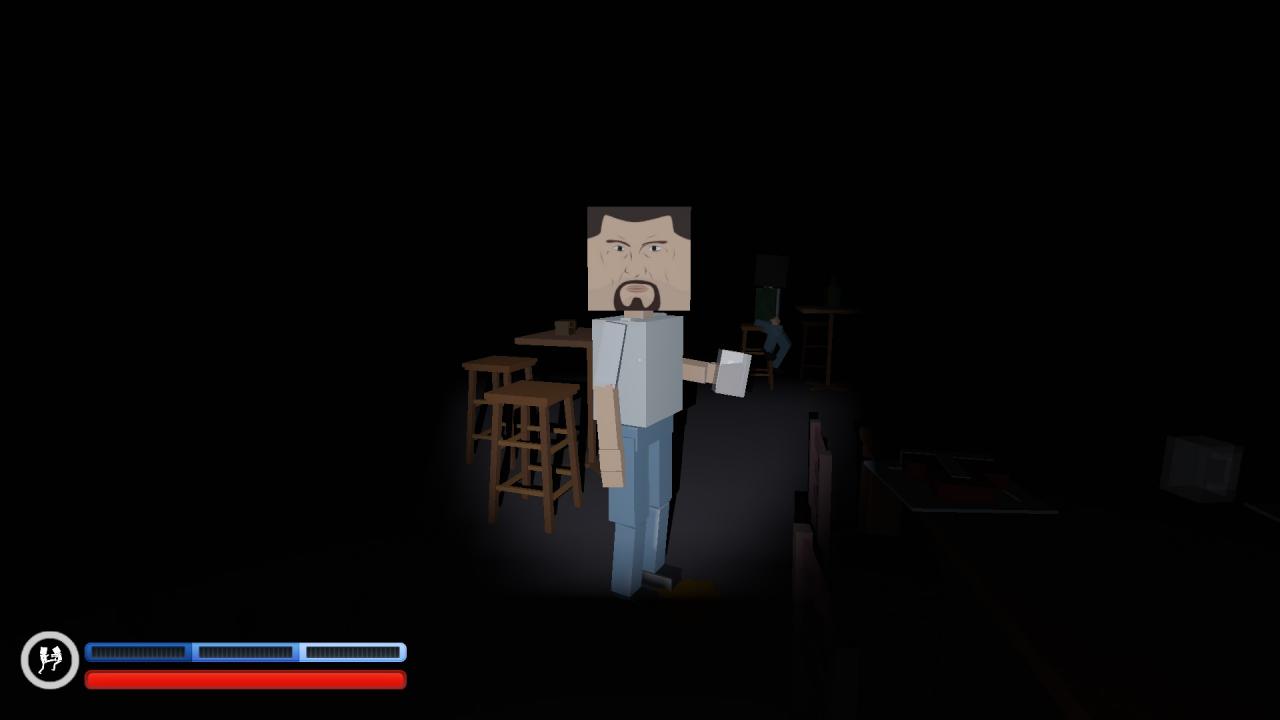 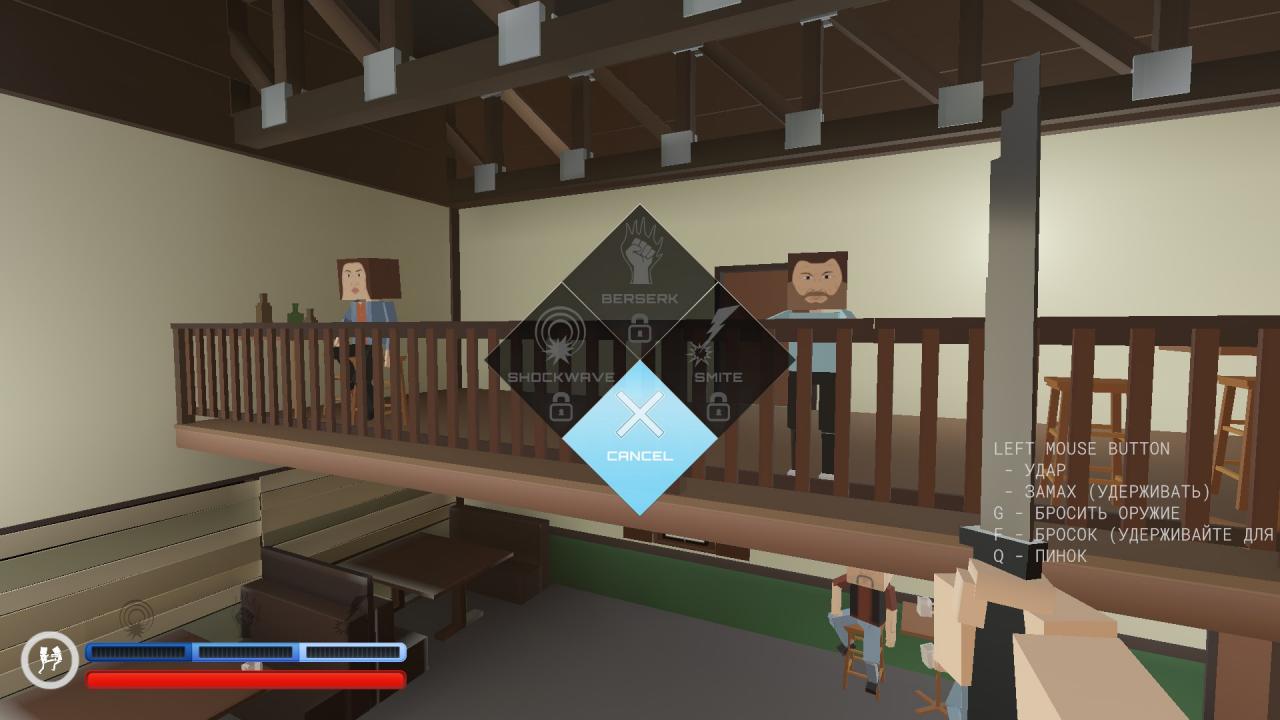 Living Dead – All enemies will be replaced with zombies from the Beneath gamemode (stronger enemies and bosses can be replaced with skeletons, or zombies with tentacles). When you start a level with this modifier, all zombies immediately run towards you. 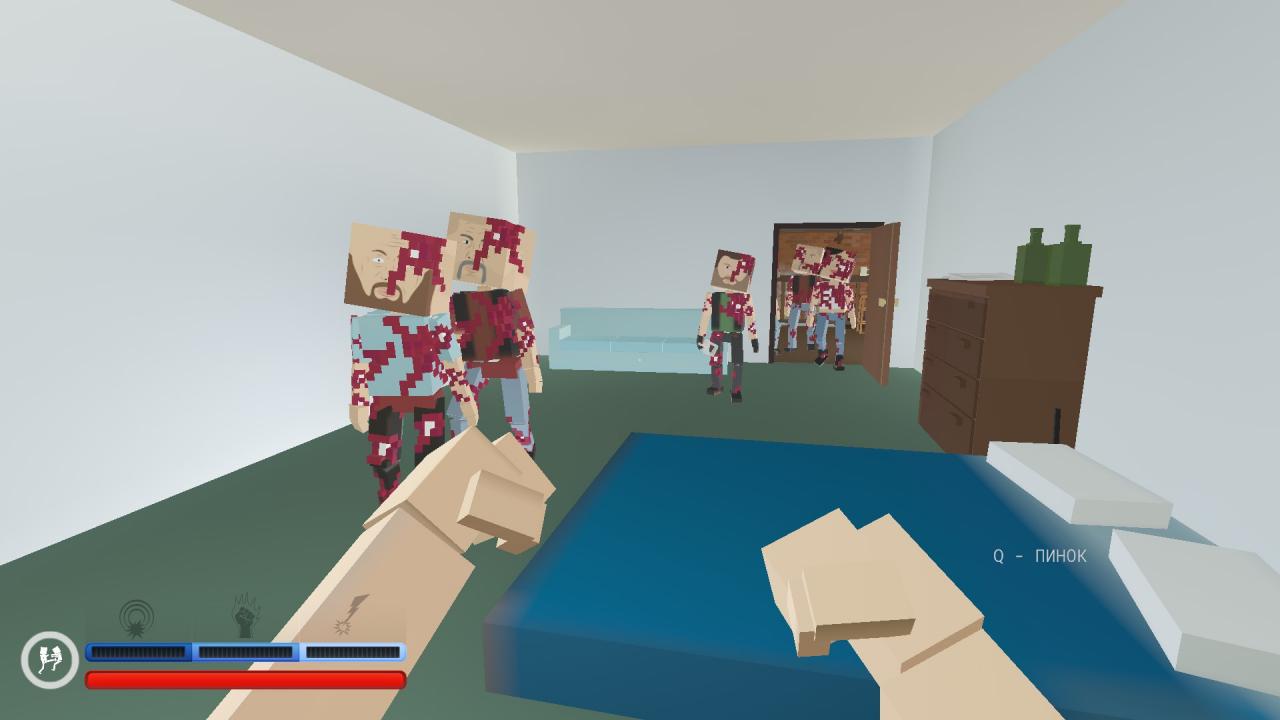 Slow Mo Run – When you press Shift, instead of running, you will have a slow motion mode. 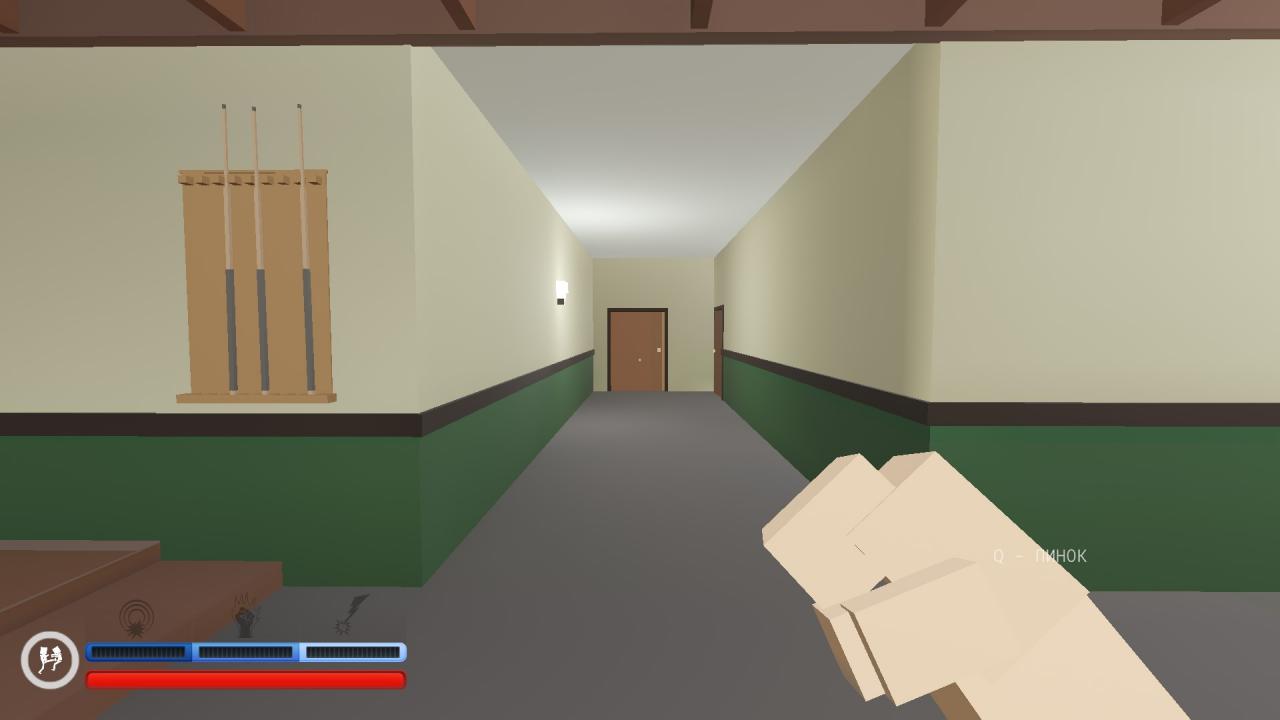 Zero G – Well, here everything is clear from the name. You can jump up to the ceiling. Thrown weapons will fly in the air. You can also kick enemies and they will fly upward. Shockwave works well with this modifier. 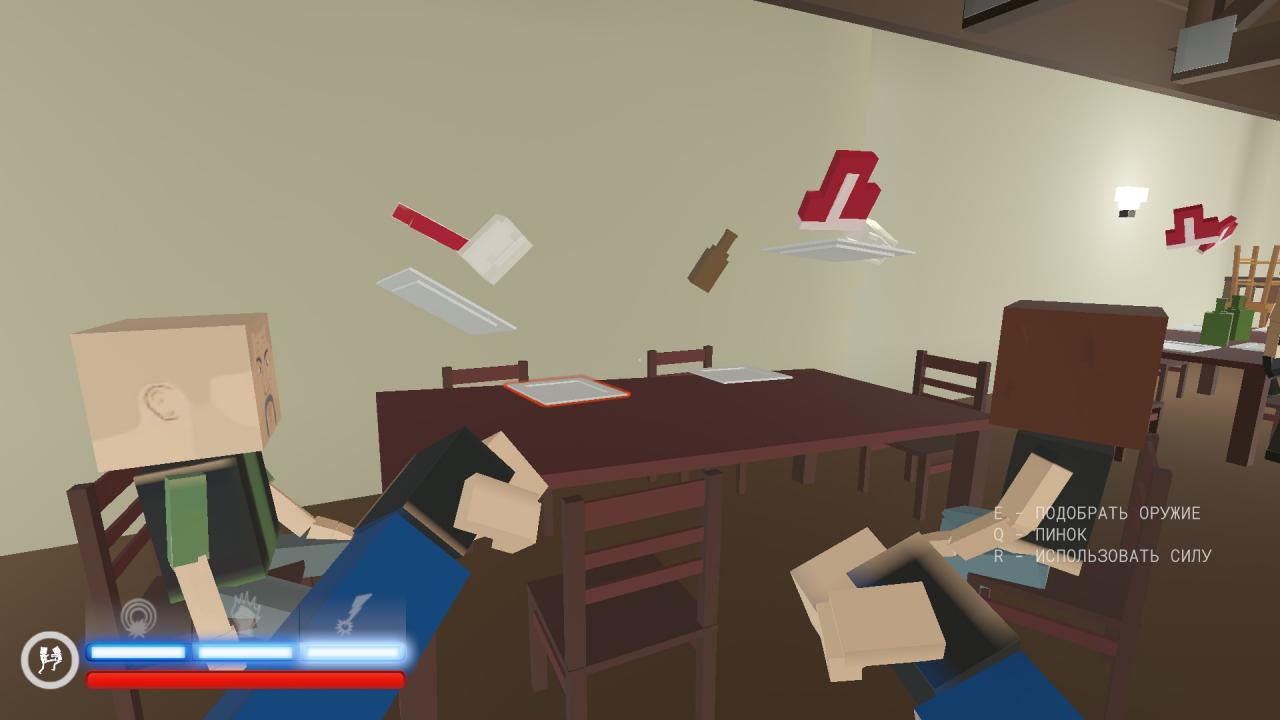 Weak Enemies – Enemies are low on health. Can be killed with one hit.

Weak Player – You can be killed with one hit (just like in Hotline Miami).

Soft Voxels – Enemies receive more wounds (only visually, it does not affect the health of enemies; enemies take damage as usual).

Boom Hands – You kill enemies with one hit (like in Berserk mode). Also, the enemies are beautifully scattered to pieces.

Splatter – More blood gushes from enemies. That’s all this modifier does. When you complete the level, you will see that more blood will remain throughout the level.

Punching Only – Of all the weapons, there are only your fists. You can’t kick enemies either.
Note: You will not be able to pick up any weapon or item. Don’t even try.

Everyone Hates Me – When you start a fight, everyone will run to you to “hug” you. Okay, they obviously don’t want to hug you … RUN AND DON’T STOP !!!

Gun Show – One of the most interesting modifiers. A rug with a firearms will be located on the level. All weapons have infinite ammo. Have fun! 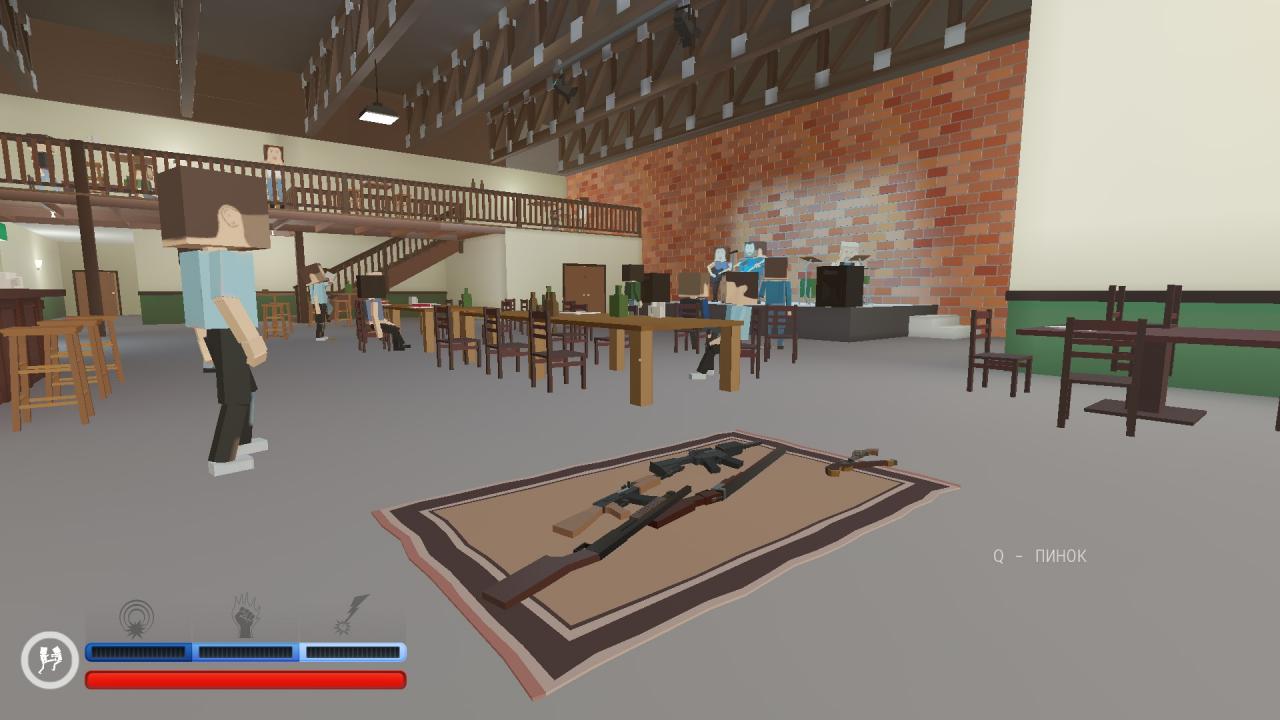 No Weapons – All pickup items and weapons disappear from the level.
Note: The weapons that the NPCs are supposed to have in their hands can still be picked up, but it is unlikely that it will help you much… 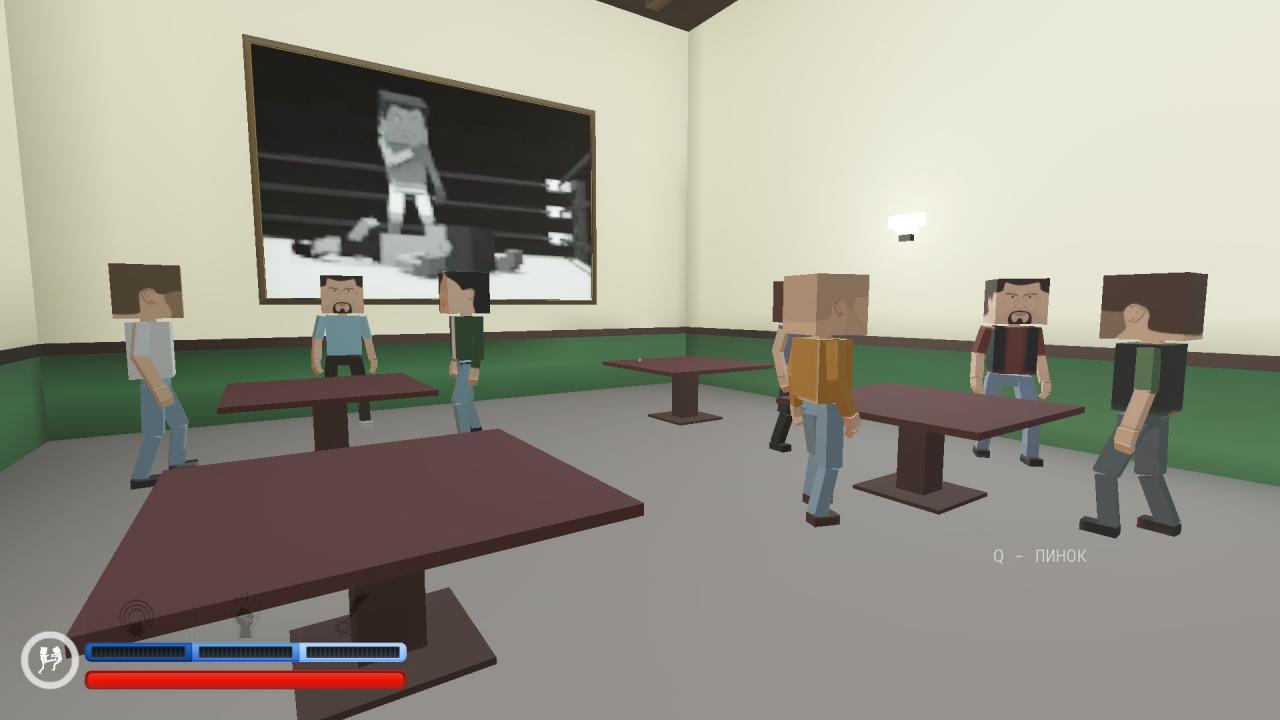 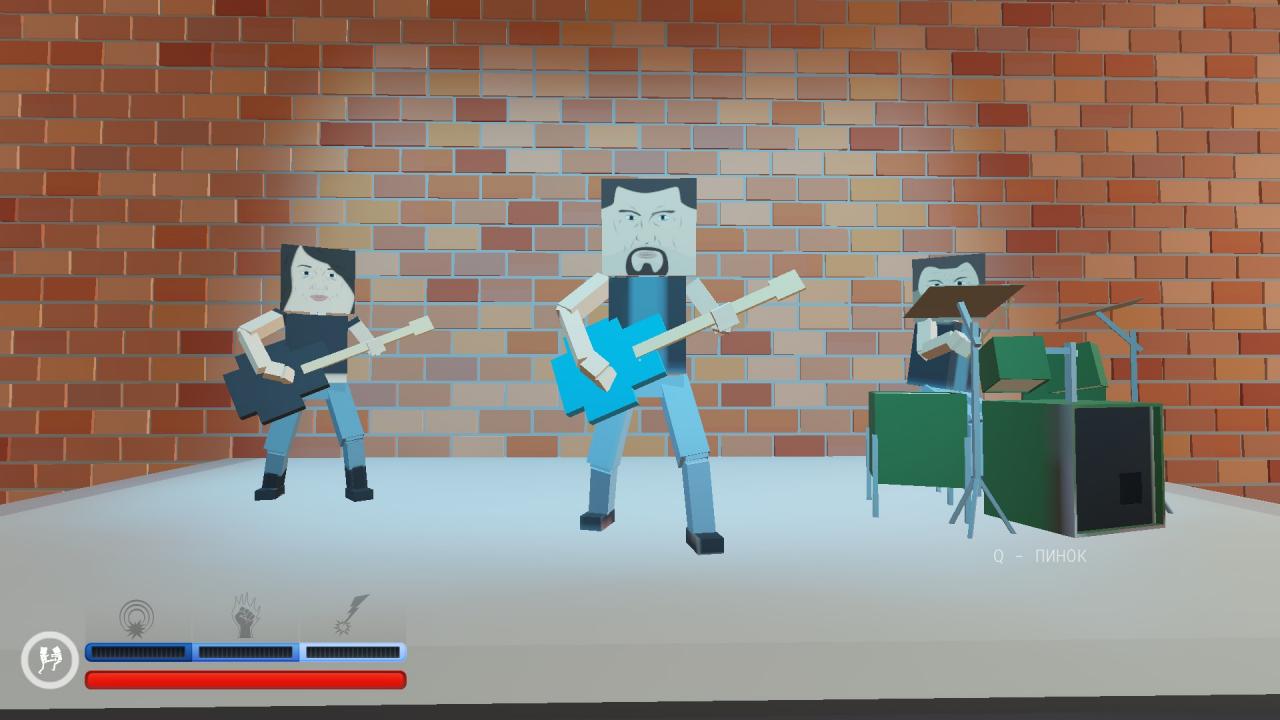 As you can see, the musicians still have guitars.

Machete Time – Another fun modifier. As soon as you start a level, all NPCs will have a machete in their hands (except you, of course). If you block an machete attack, sometimes you can still take damage. So it’s a good idea to run away from them as fast as you can. 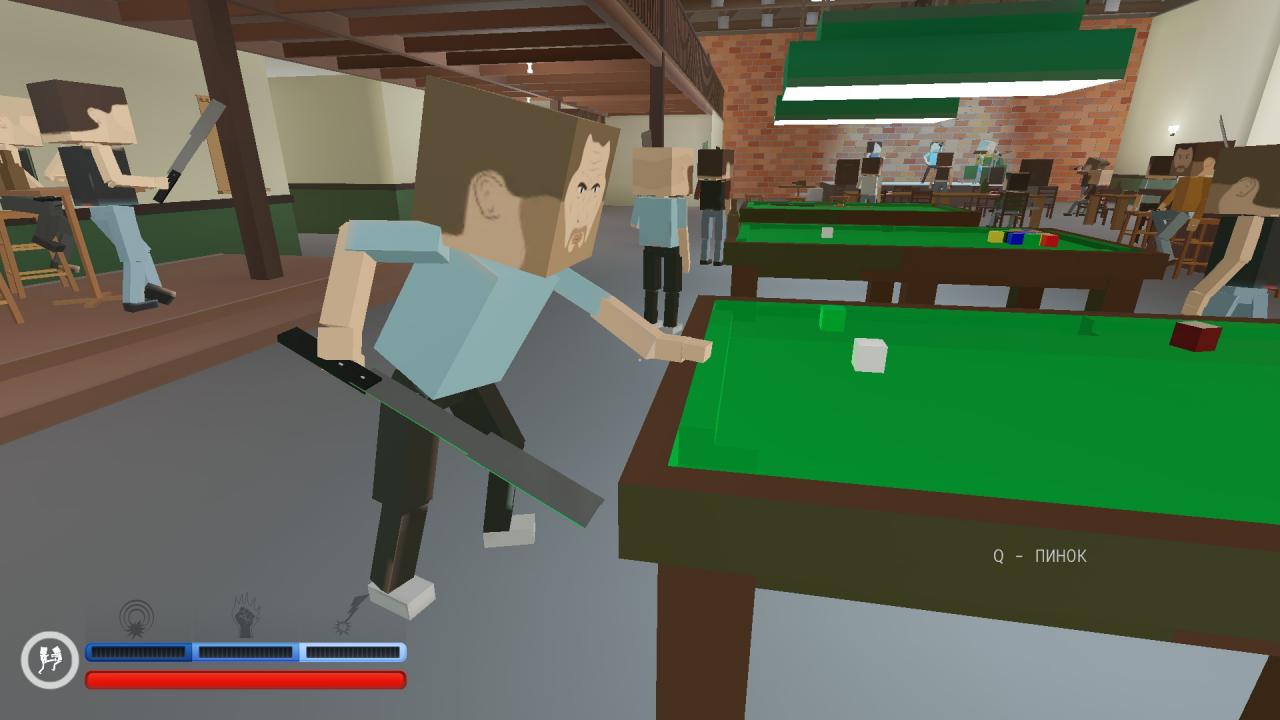 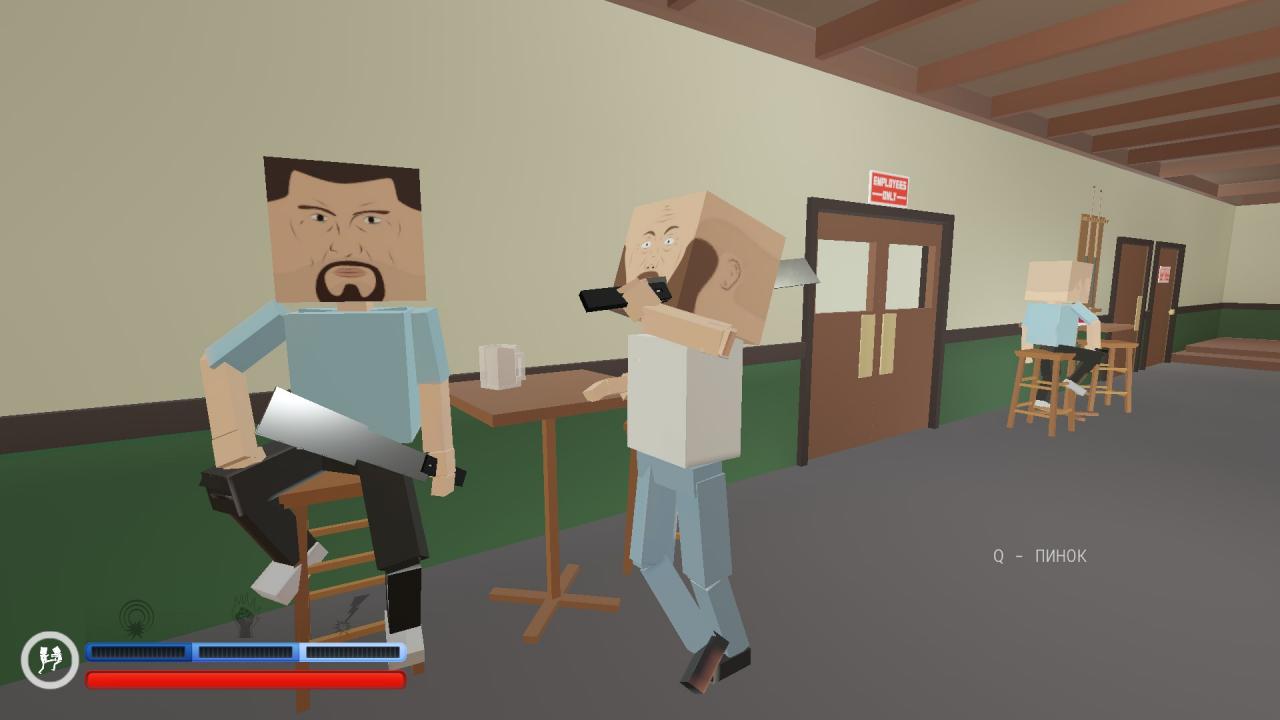 Unlimited Power – Your ability scale is always filled to the maximum. When using the ability, the charge of the scale is not deducted, so it will always be at max.

Shocking Touch – As soon as you touch the enemy, he will be electrocuted (only a punch and kick will work). From an electric shock, the enemy falls (unless it is the boss). 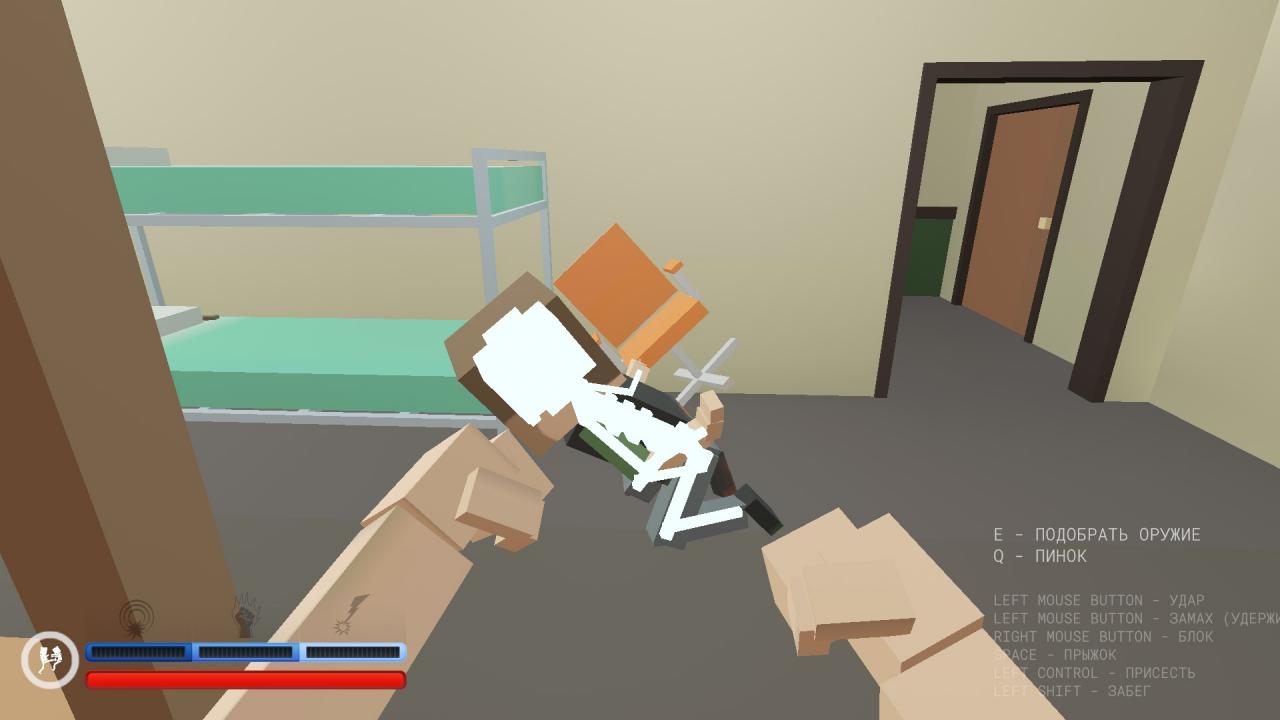 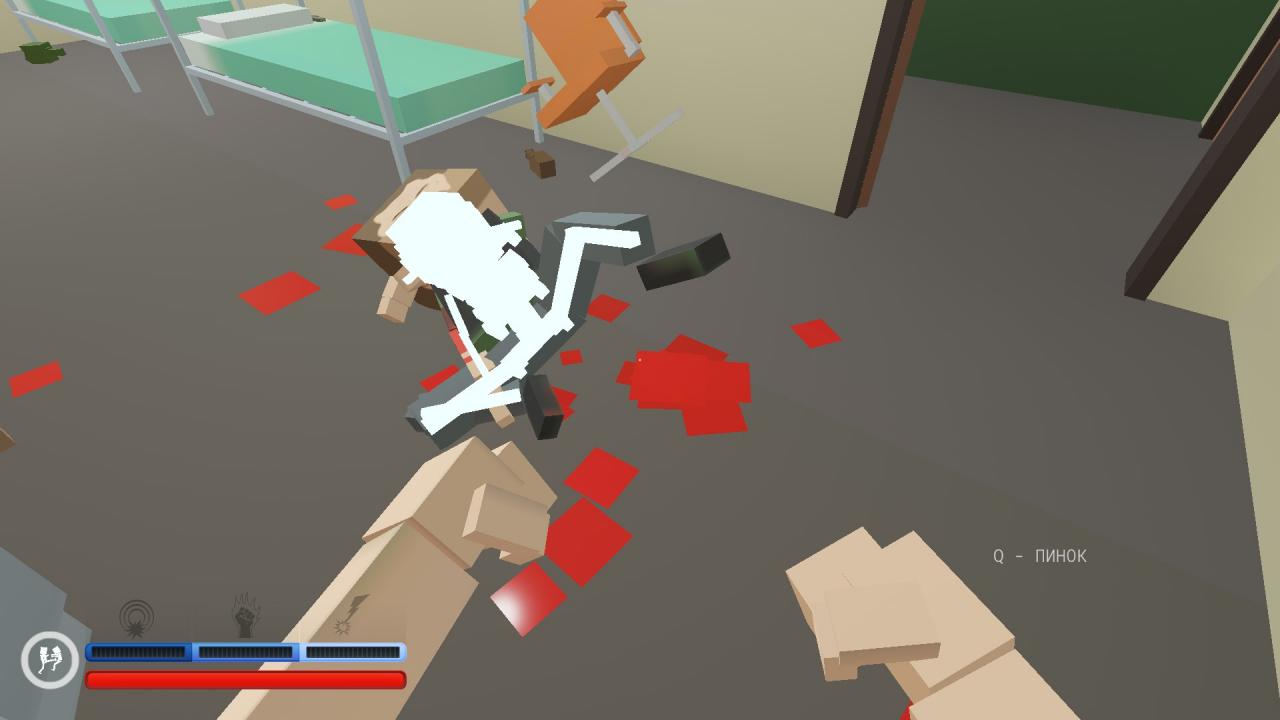 Class Modifiers From The Beneath Gamemode

Brawler – Gives you the abilities of the Brawler from the Beneath gamemode.
Q Button – Kick
Abilities:
Shockwave – A shockwave that knocks down your enemies. The ability does no damage, however, the enemy can fall from a height and crash to death. Does not work on bosses.
Stone Skin – Your body becomes “stone”. You take a lot less damage. The duration of the ability is limited. When you use the ability, you will see an aura around your hands. This means that the ability is active. When the aura disappears, it means that the duration of the ability has expired.
Berserk – Berserk mode. You kill enemies with one hit (unless it’s the boss).

Vanguard – Gives you the abilities of the Vanguard from the Beneath gamemode.
Q Button – Instead of a kick, you can “charge” your weapon (the weapon becomes more powerful)
Abilities:
Light Blast – Weaker counterpart to Shockwave. The same shockwave, but working in one direction.
Restoration – Creates a zone in which player slowly healing.
Smite – Pointing at your enemies will tear them to shreds. The game slows down for the duration of this ability.

Warlock – Gives you the abilities of the Warlock from the Beneath gamemode.
Q Button – Instead of a kick, you can release 3 fireballs from your hand (the ability is restored over time)
Abilities:
Seeker – Also a fireball that explodes on contact with a victim.
Fire Bomb – A large fireball that deals great damage to a crowd of enemies when exploded.
Chaos – You deal more damage to enemies. Also, enemies begin to fight each other.

Spectre – Gives you the abilities of the Spectre from the Beneath gamemode.
Q Button – Instead of a kick, the player makes a dash, knocking the enemy down (bosses will not fall, but they can be knocked back and they will remain on their feet)
Speed – Increased movement and attack speed.
Enchant Weapon – Ability charges a weapon, increasing damage.
Teleport – Teleports the player in the direction he is looking.

Corrupted – Gives you the abilities of the Corrupted from the Beneath gamemode.
Q Button – Instead of a kick, the player launches hungry souls, which take away health from enemies and add to you
Abilities:
Acid Rain – Creates acid rain. If the enemy passes through the radius of the rain, they will take some damage. The player takes no damage from this ability. Works well on a crowd of enemies.
Entangle – The ability creates a zone, passing through which enemies will be pierced by spikes emerging from the ground. This ability does NOT deal damage, but it stops enemies well.
Raise Dead – A zone appears from which zombie allies spawn. Your mates can help you by distracting the crowd.