This is an Early Access walkthrough & achievement guide for Rebellion: A Rogue Souls Like.
Any changes made during the early access period could possibly change the outcome of the guide.

WARNING: This guide contains some spoilers! 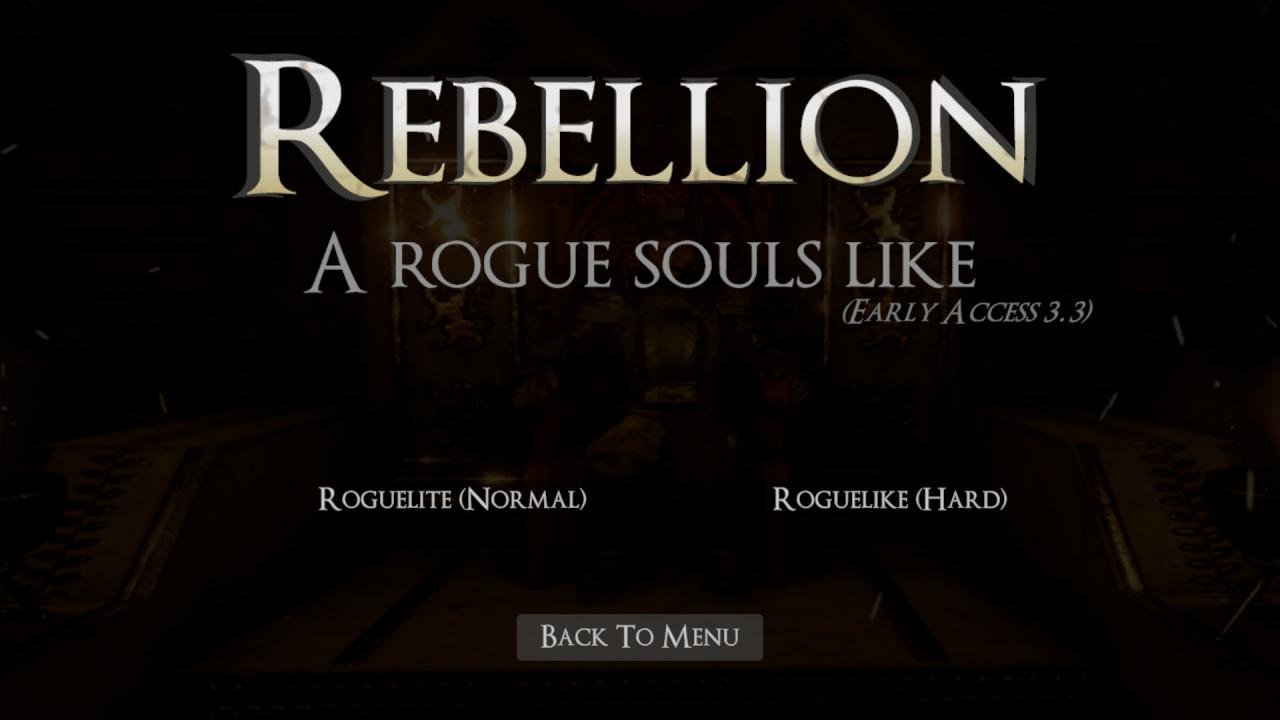 This is a short guide on Rebellion: A Rogue Souls Like. In this guide I will try to explain how to get every achievement.WARNING: This guide contains spoilers!

Below you can see the controls for both controller and keyboard.
Use whatever you prefer, if you’re used to games like Dark Souls then you might want to use a controller.
Controller 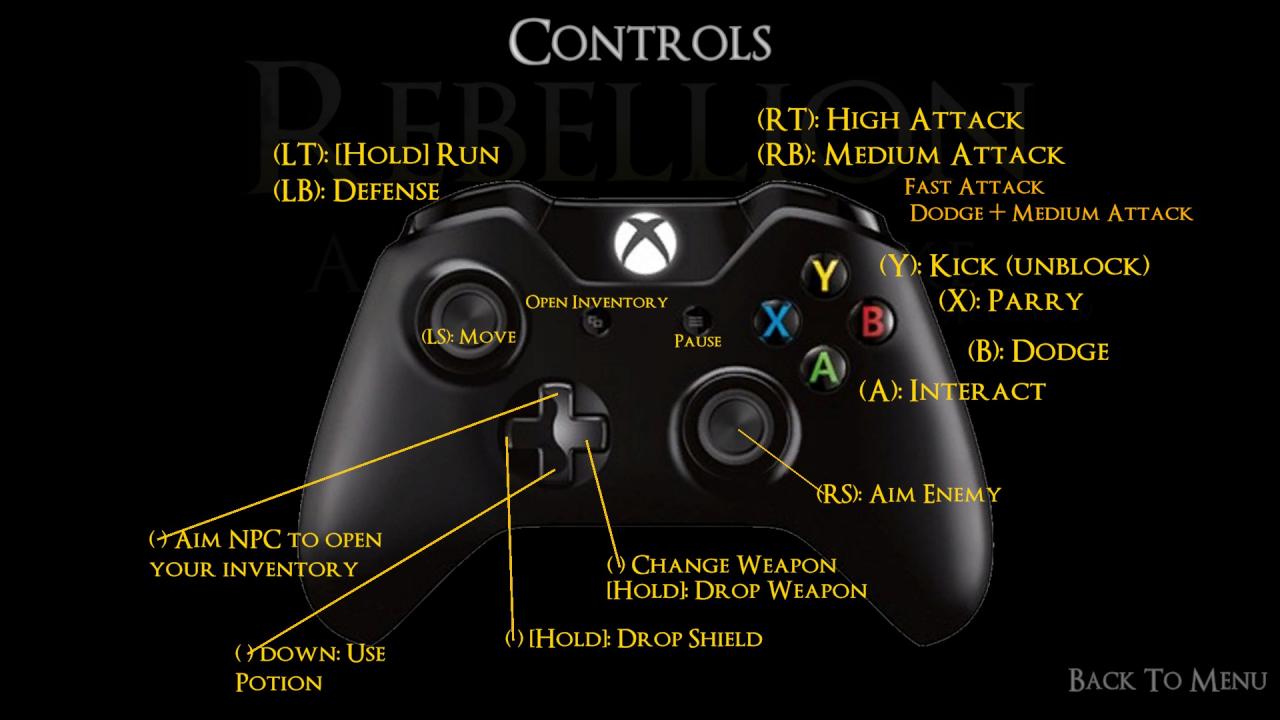 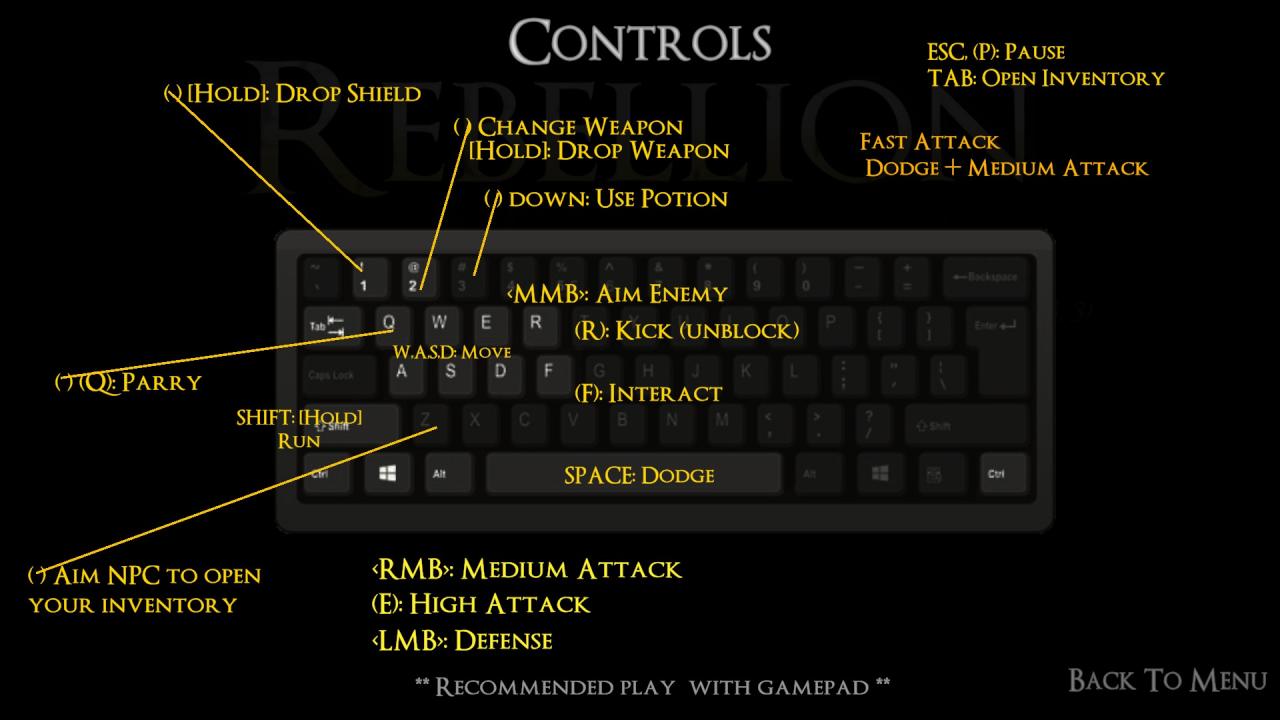 You start in a hallway with a few allied npc’s.
If you look behind you, you will find some weapons on the ground. 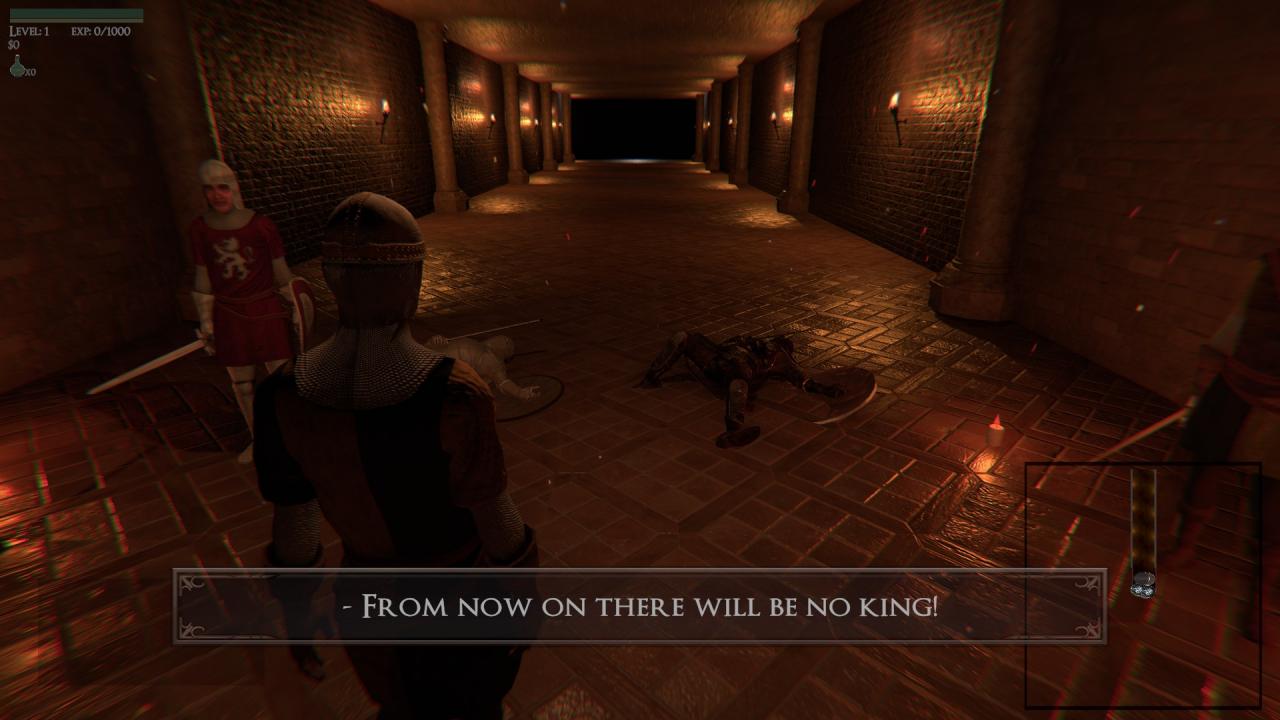 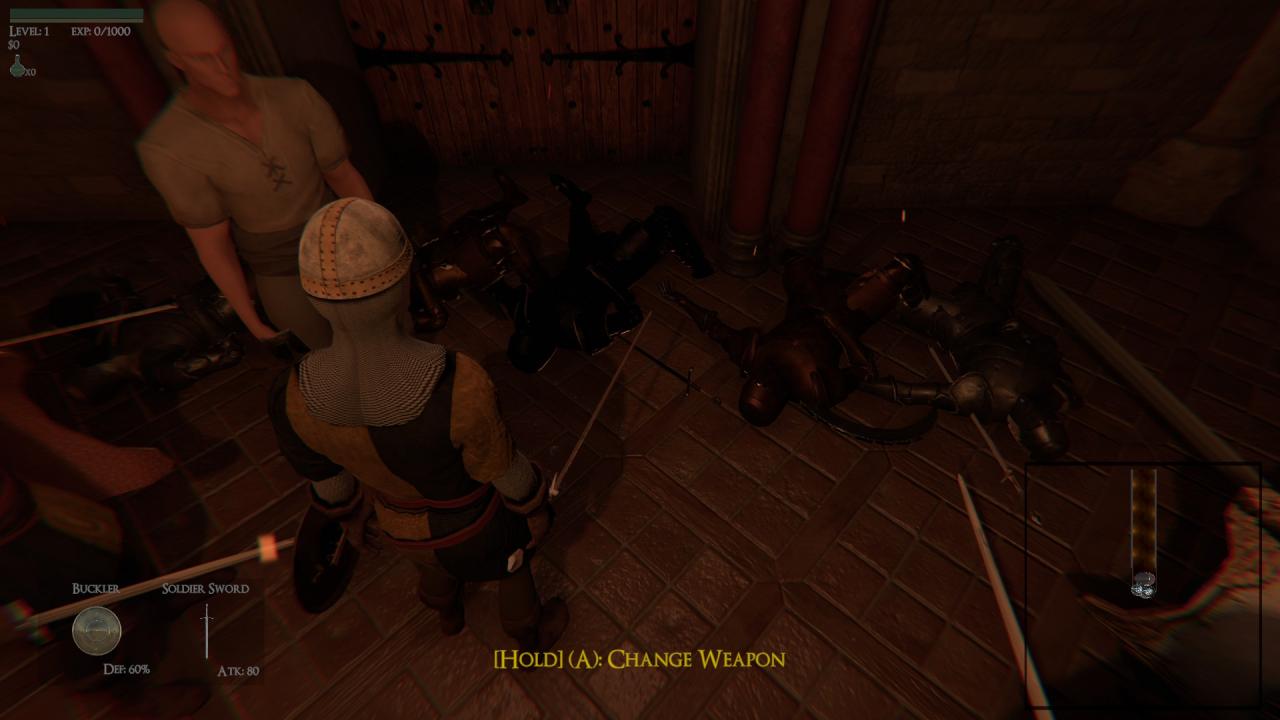 At the end of the hallway you will see a guard, your first fight. 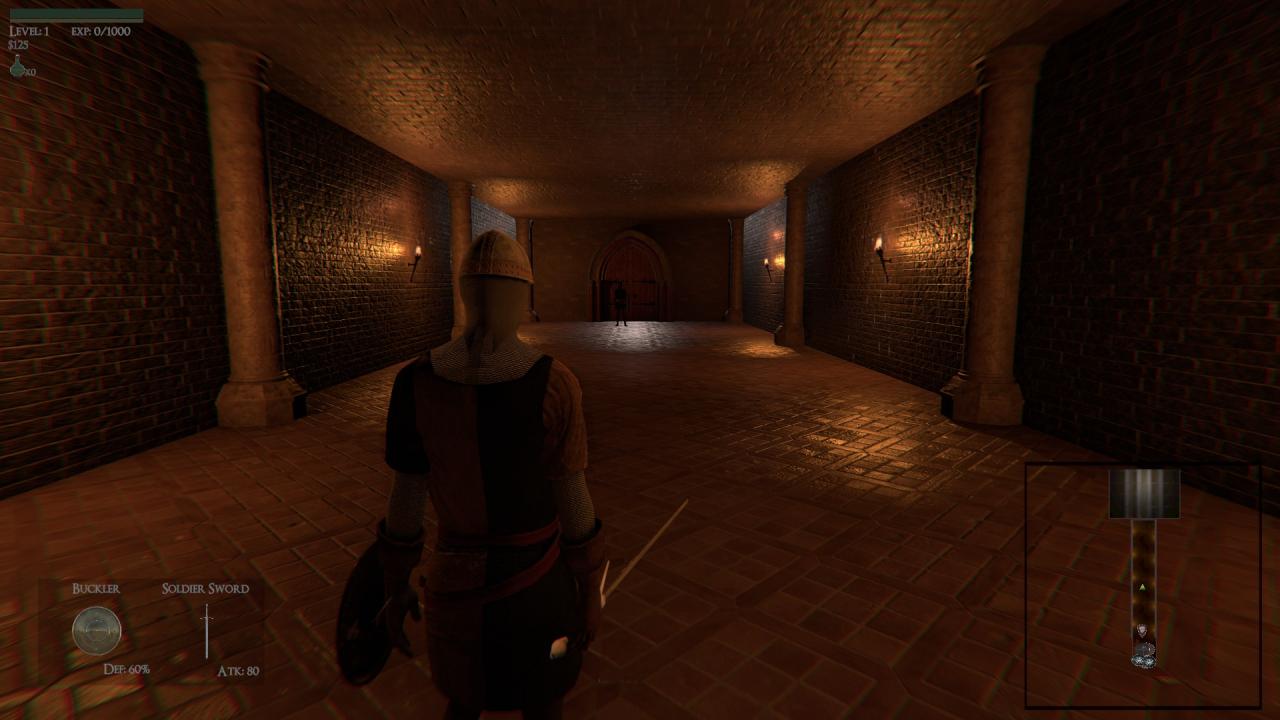 Once you defeat the guard, you will earn your first achievement.

Open the door and you will face the king. 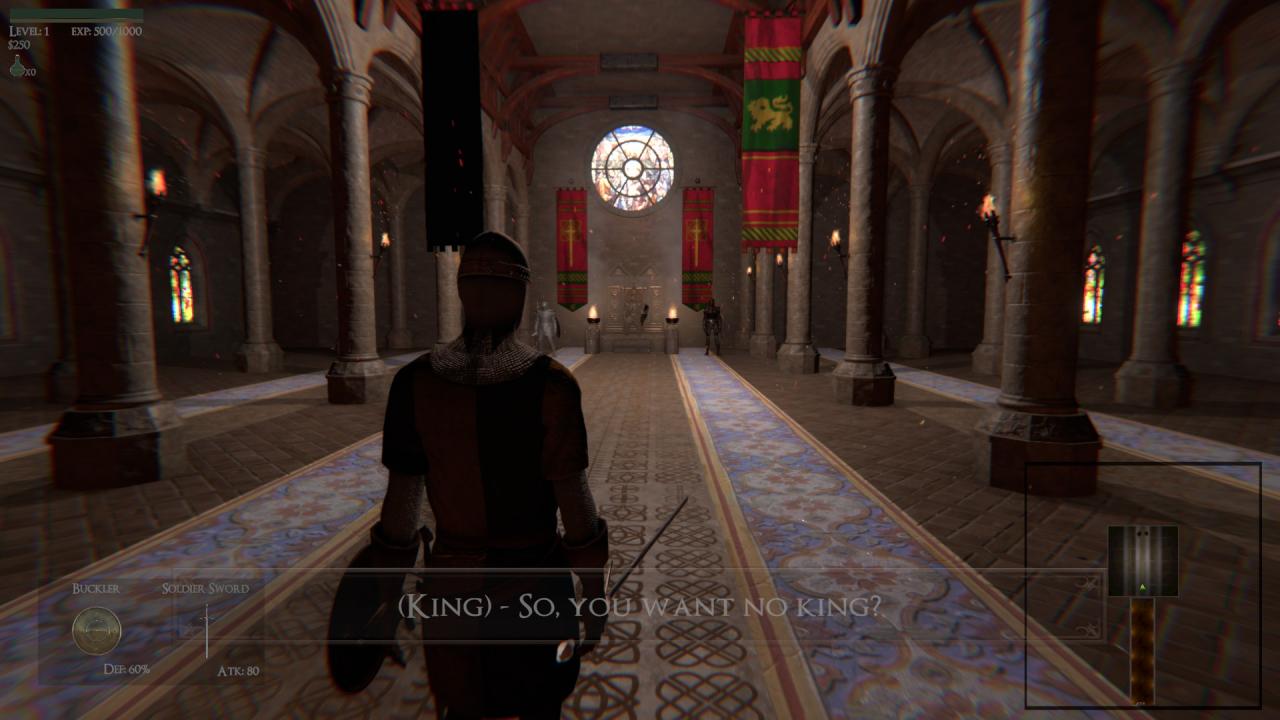 If you get close enough you will trigger a fight. The king will kill you in 1 hit giving you the next achievement.

Welcome To Rebellion
Die for the first time

You wake up in the prison, pickup the key in front of you.
After opening the door you will meet the guard that gave the key. 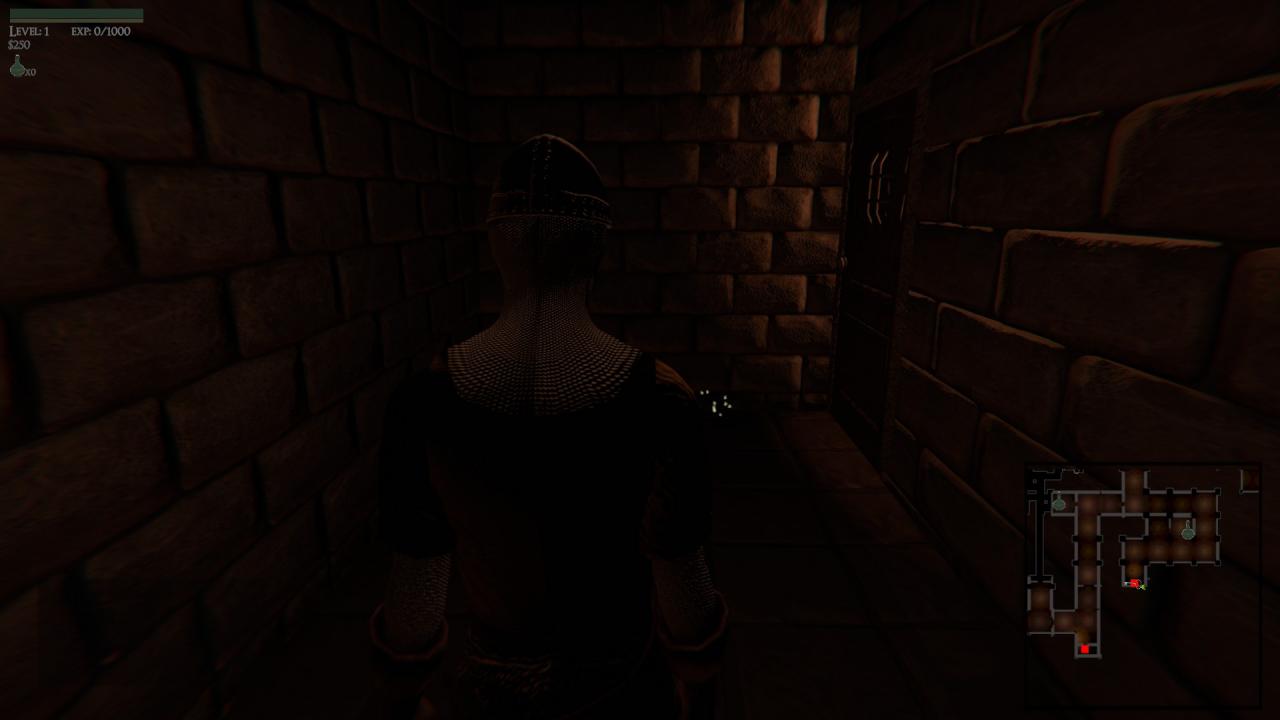 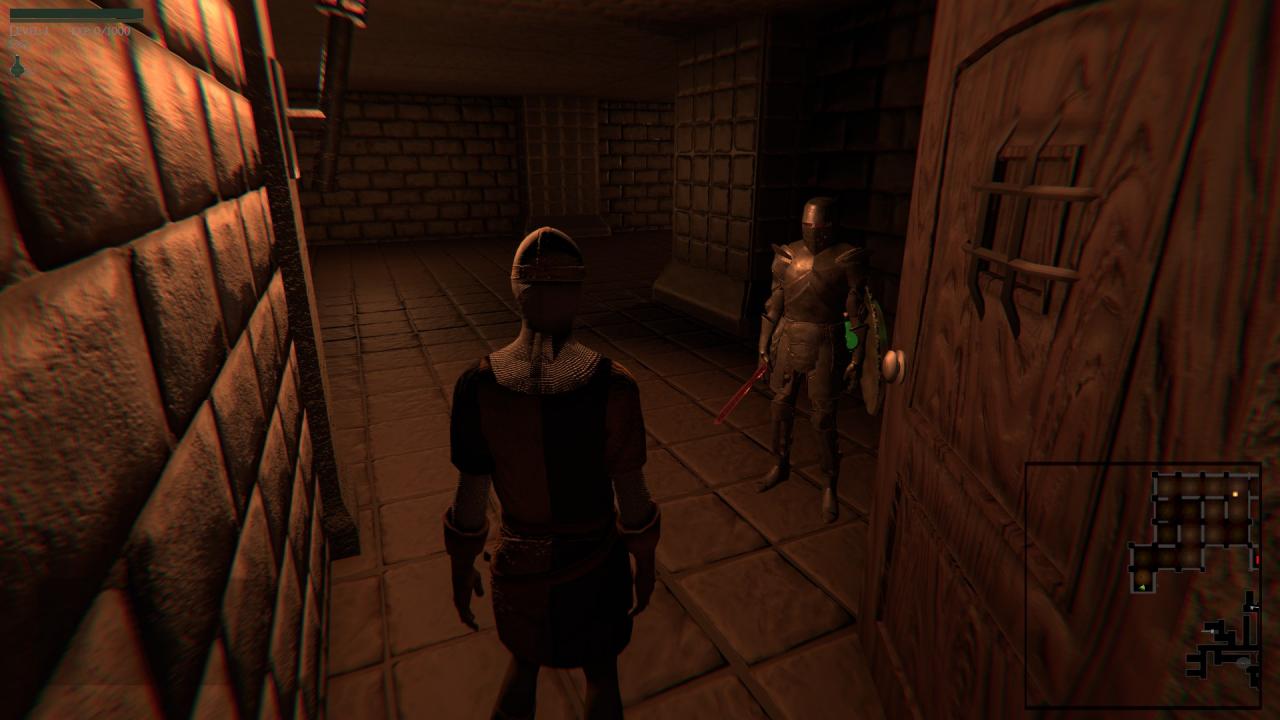 Talk to the guard and he will give you a sword.
Now I’m not sure if everyone has the same starting location, because every time you die your spawn changes.
You will eventually come see some crates or boxes near the walls. 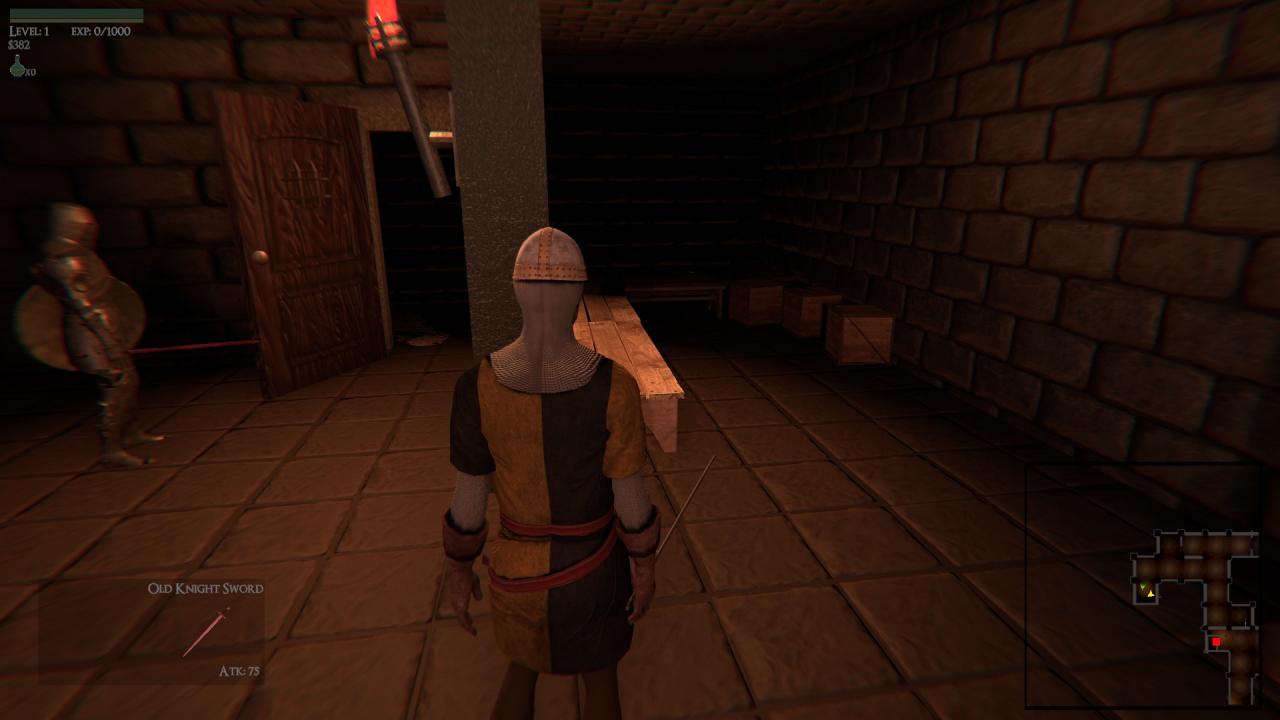 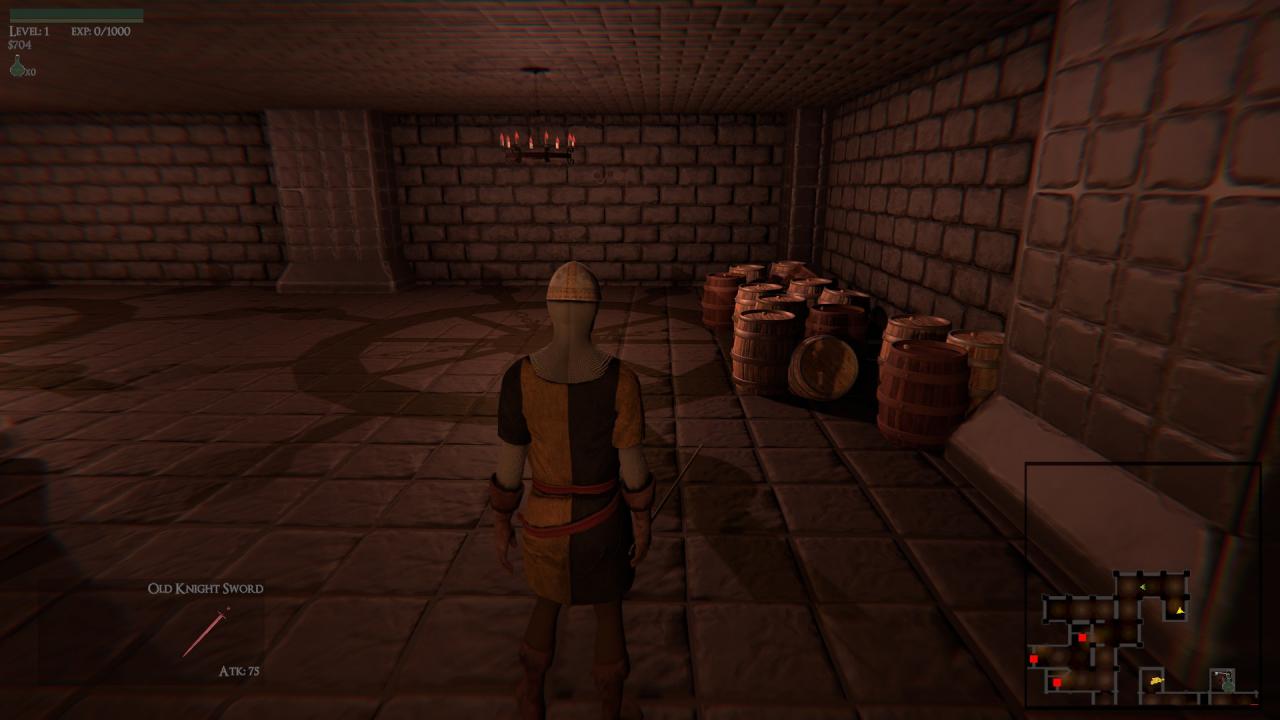 Destroy a few and the achievement will unlock.

After exploring the area a bit you will come across a guard standing inside a doorway, this is your first boss. Now depending on your starting area, you may have already fought a few guards to obtain a shield and maybe a better sword. 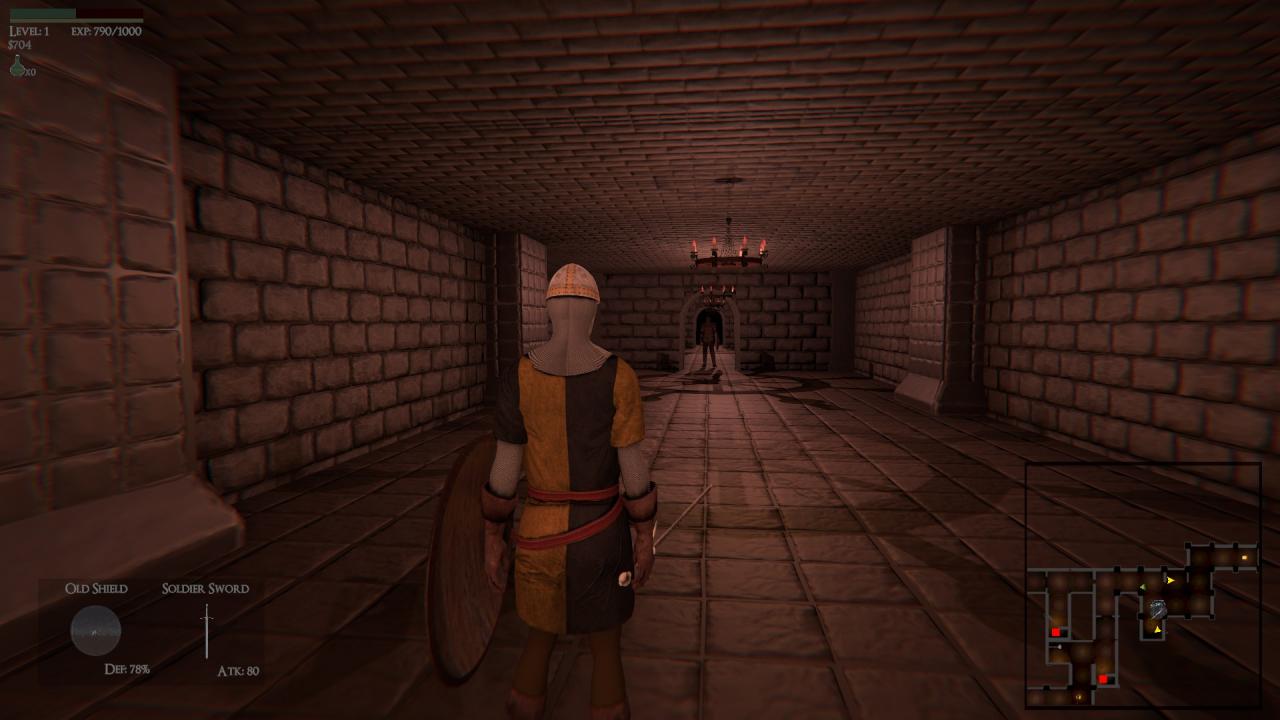 The boss is just a regular guard with a bigger healthbar, shown at the bottom of your screen.
Either use your dodge (space on keyboard / B on controller).
Or use your parry (Q on keyboard / X on controller).
Not sure if they keybinds are the same on PS controller.
You can also try to backstab if you get the opportunity, you will see a red sword icon appear if you’re behind the guard. Dealing most damage.

If you look at the minimap in the bottom left, you will see a few things. 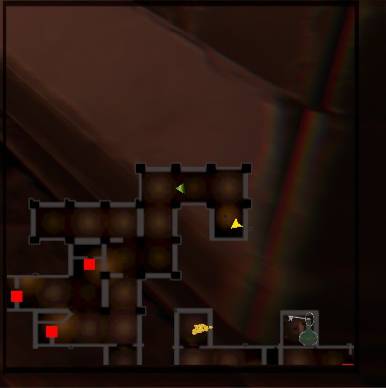 You need to find 4 different keys to open specific areas

Key
Opens
Orlop
Doors with a red square
Smith Room
Should be 1 door with a sword, hammer and anvil in it. Sword is pretty strong in the early levels
Cage Key
Opens the door with 1 prisoner behind a some bars
Prison Key
Opens all the prison doors

The Cage and Prison key allow you to free a couple prisoners. 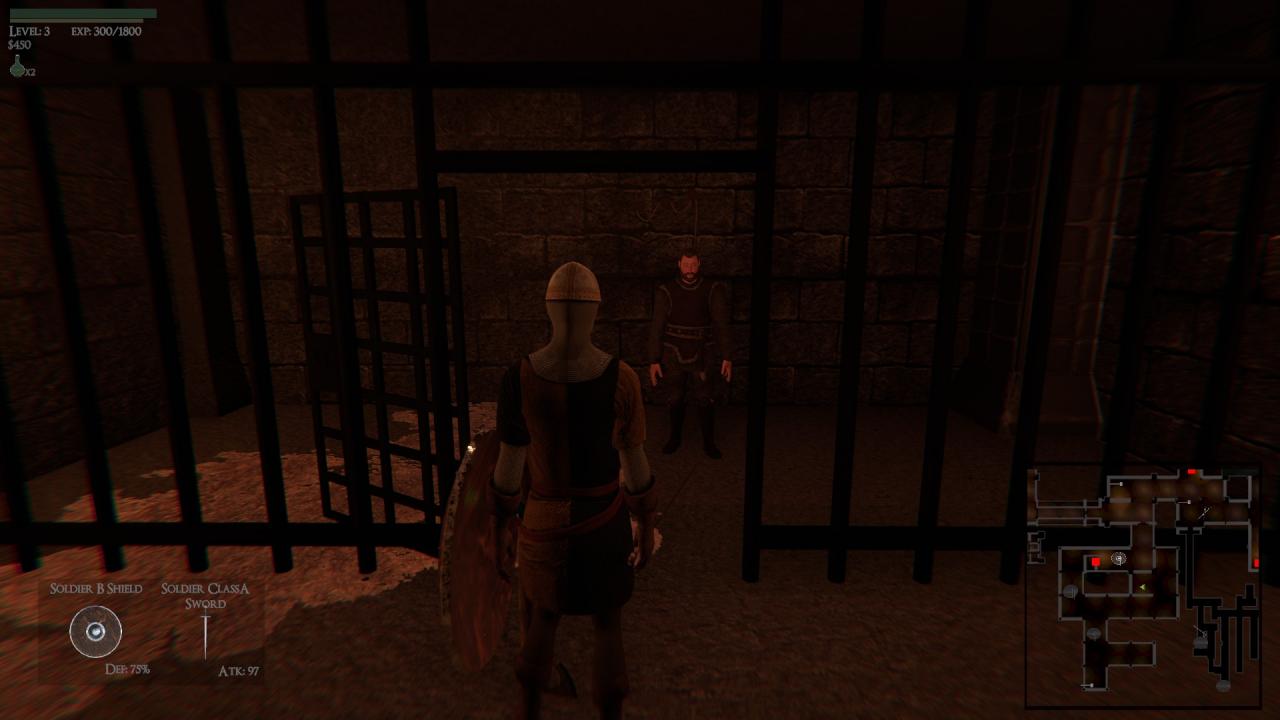 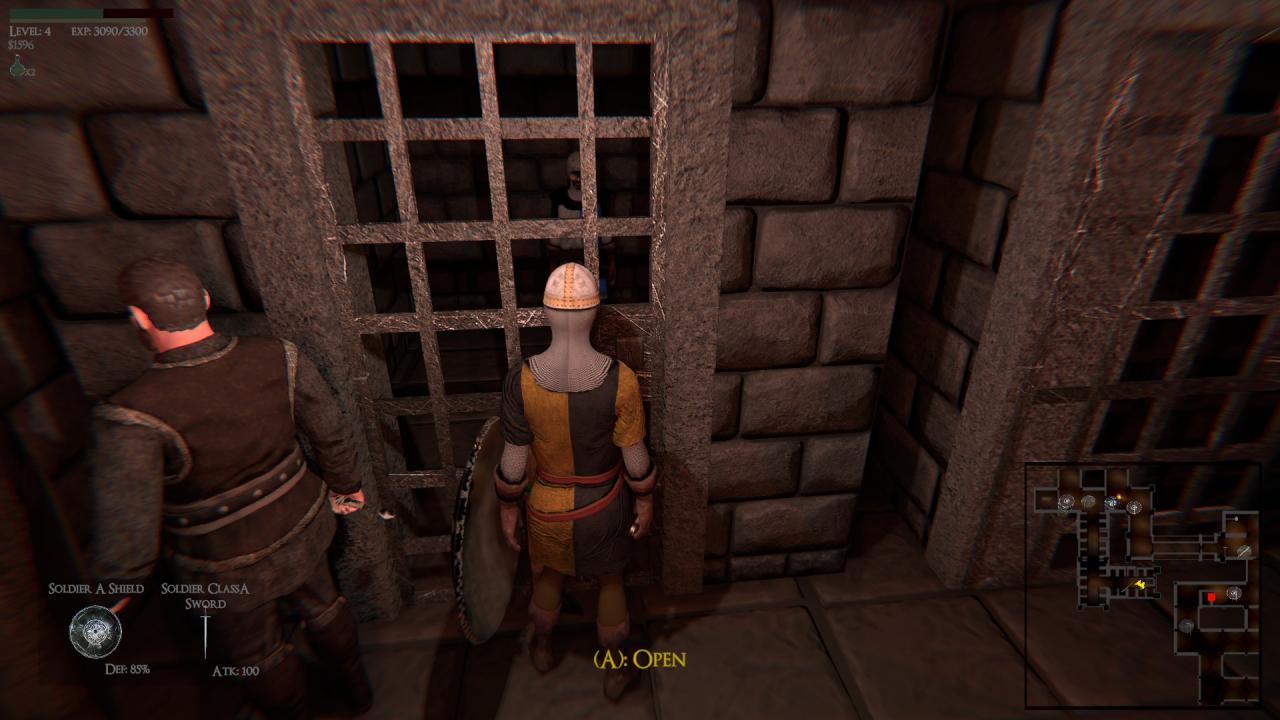 You can find multiple prisoners next to each other in the prison area.
Speaking to them recruits them giving you the following achievements.

The return of your squad
Recruit your first npc

What A Squad!
Made a squad with six members

After recruiting the prisoners, you will eventually come across a door with 4 guards next to it.
The middle one is a boss, while the other 3 are regular guards. 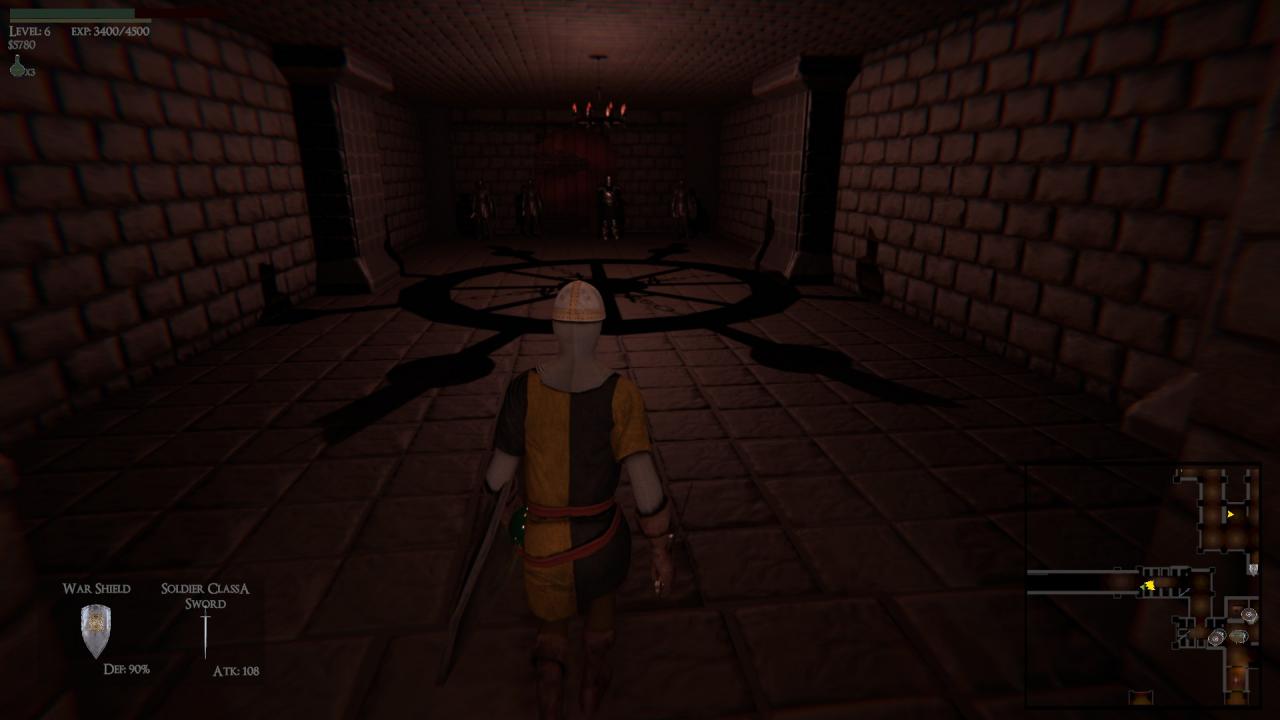 Before you fight them, make sure to have your allies gear up by walking over dead bodies.
For now the only way I know how to change weapons from allies is to go into their Inventory by facing the npc, then hold Z or Up on controller.
Drop the weapons you want to change and let the ally walk over the weapons you want them to pickup.
You can buy a shield or sword by the few sellers you find. 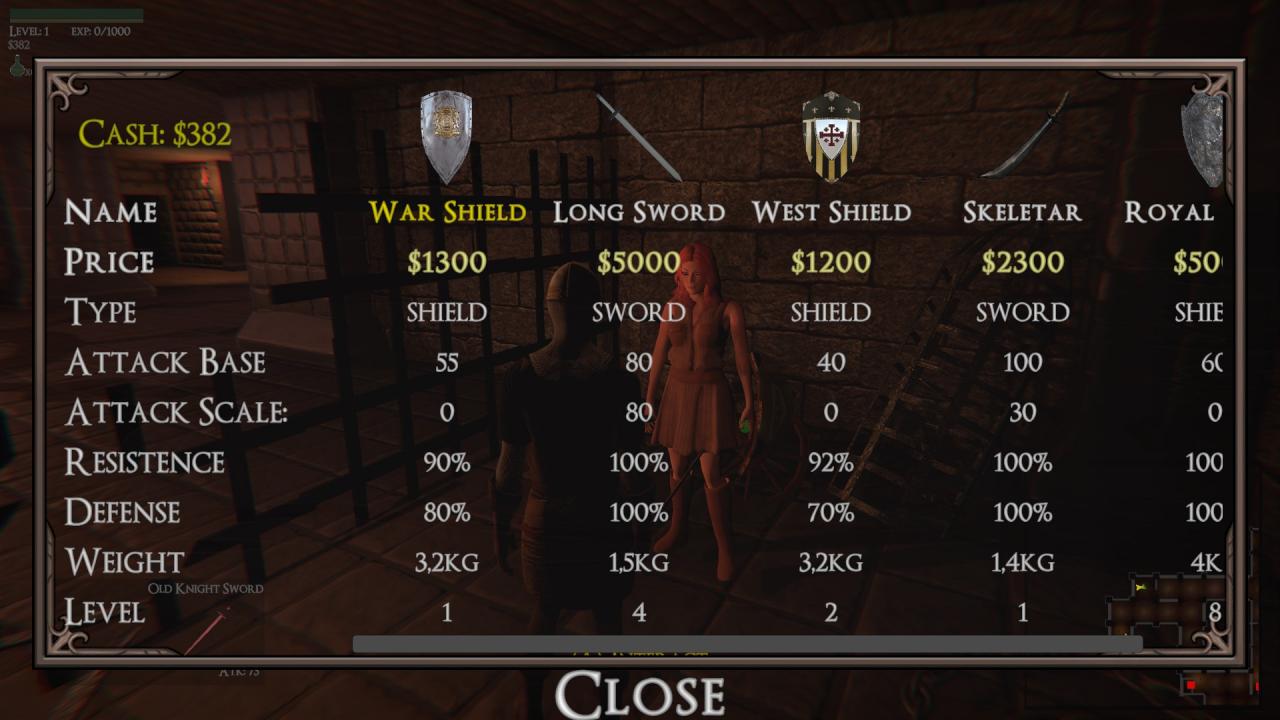 Buying a shield or sword gives you the following achievement.

First Purchase!
Buy something on the market

When you and your squad are ready, walk up to the door and you will fight the 4 guards.
It’s best to let your squad deal with the boss guard as they will most likely backstab him, giving you the opportunity to kill atleast 1 or 2 of the regular guards.

Once the fight is over, collect the dungeon key from the body. This gives you access to the door. Make sure to pickup the weapon from the boss, either keep it or give it to one of your allies.
The next achievement will unlock after you go through the doorway. 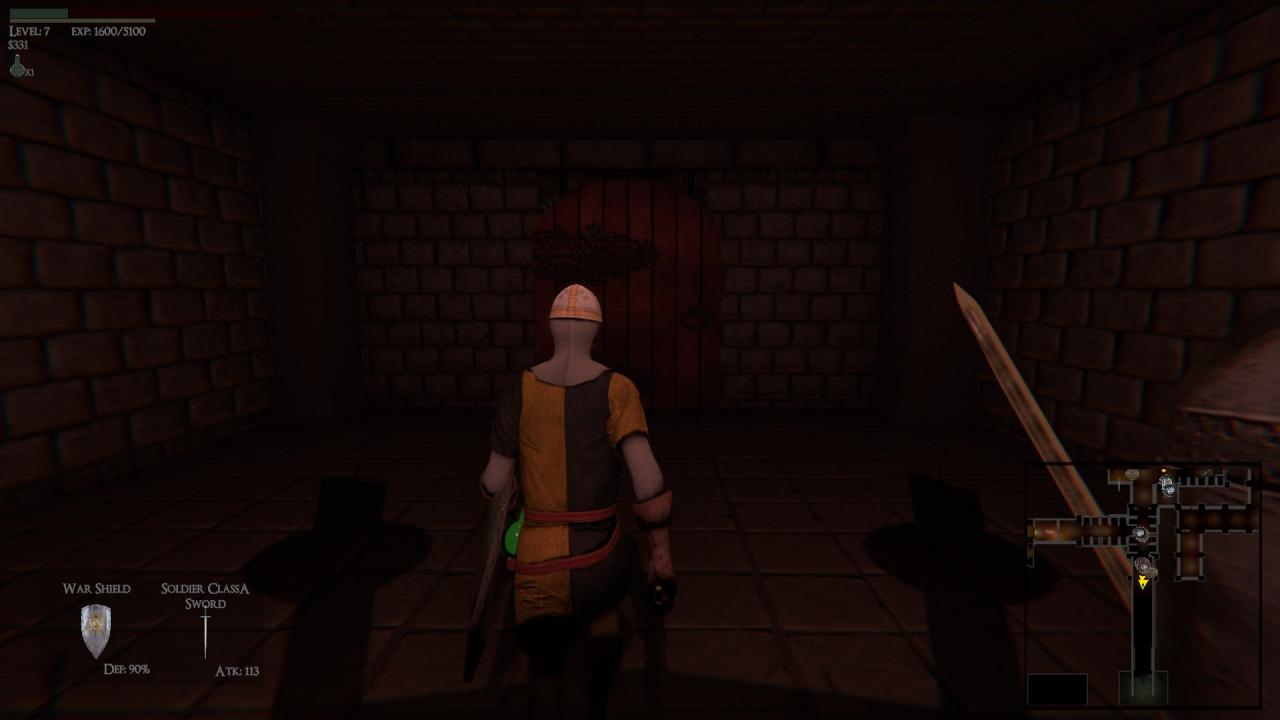 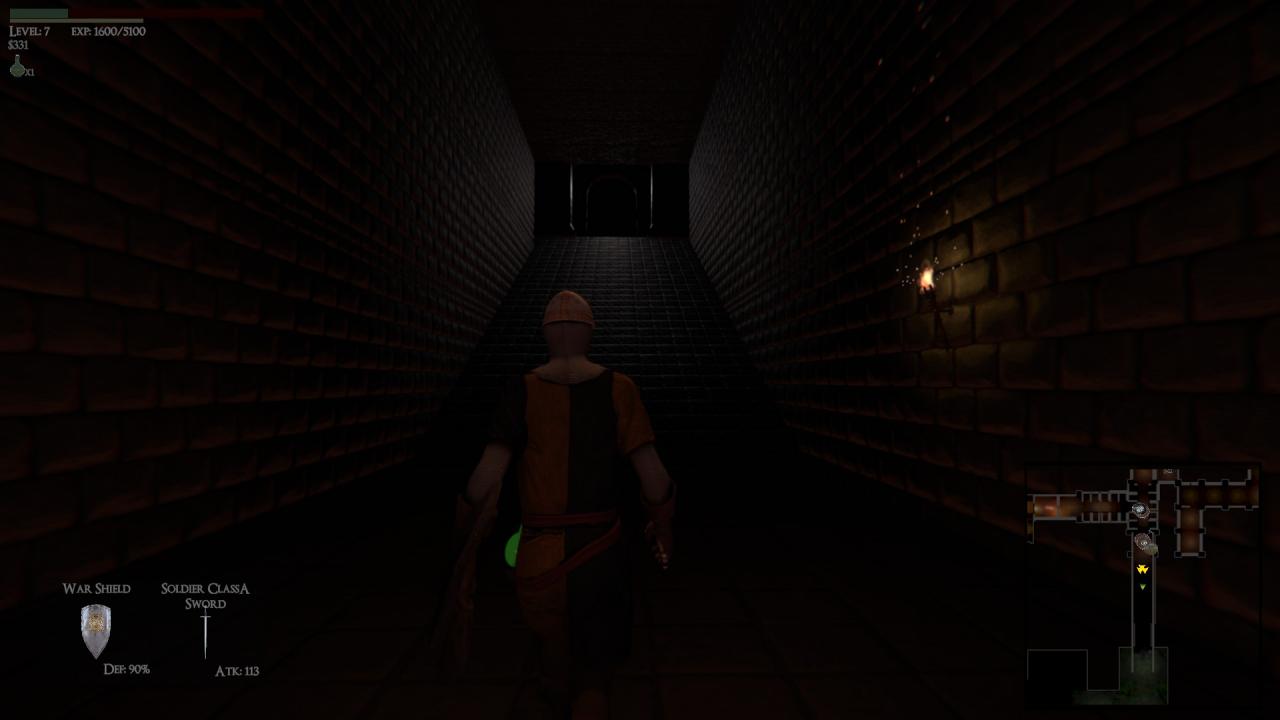 Out of Cavern
Leave the prison

Walk up the stairs, you will come outside. Here are a few guards that are stronger than the ones inside the prison area.
However if you have enough allies you shouldn’t have a problem dealing with them.
After you kill them, make sure to swap swords and shields with your allies. 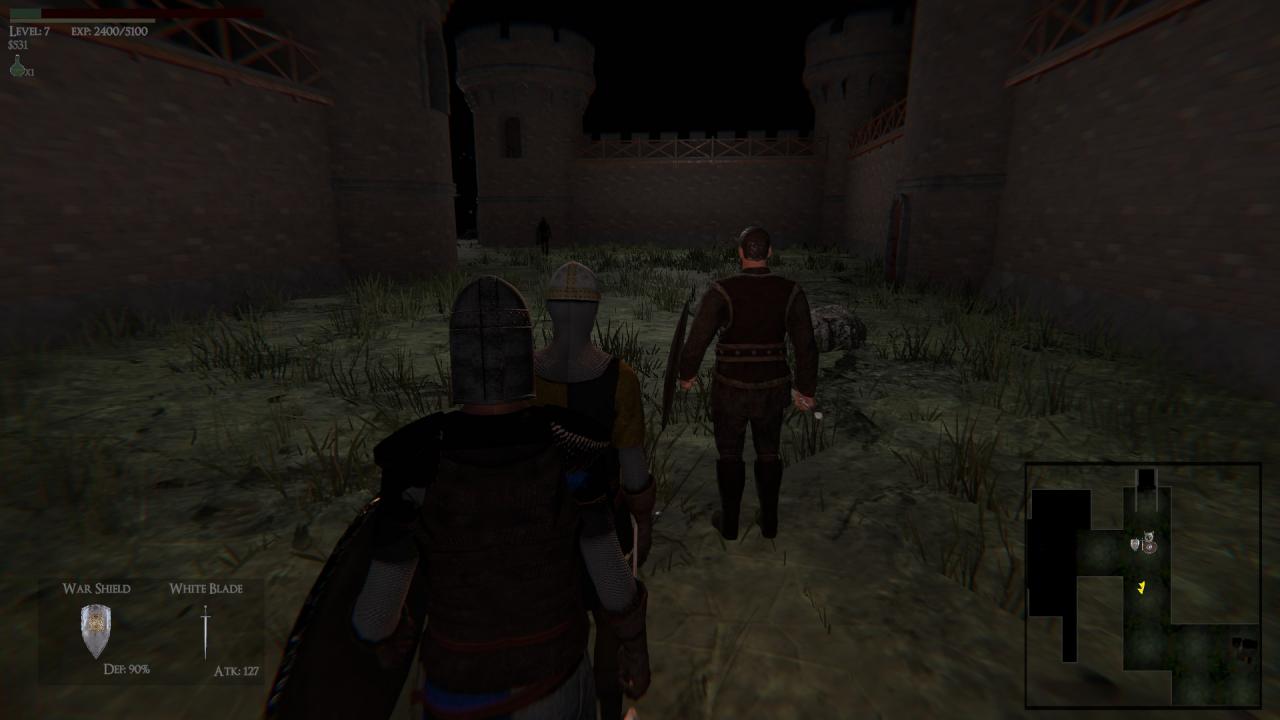 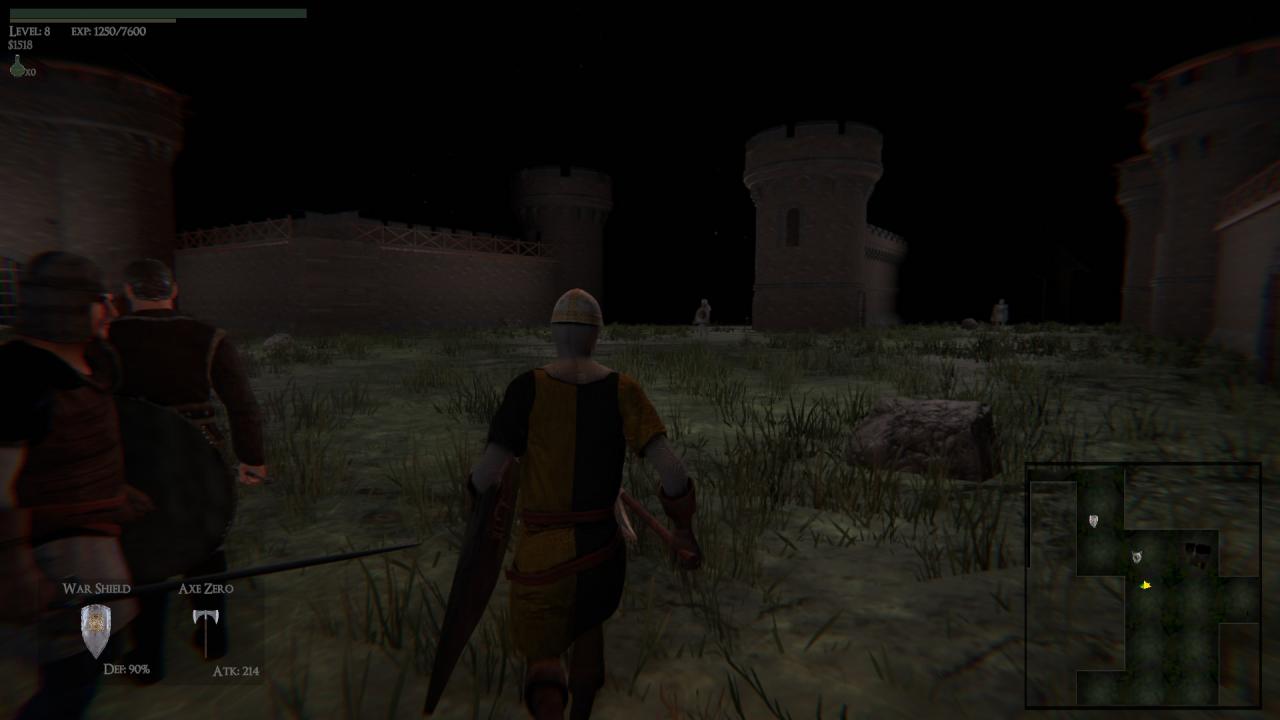 Walk through the courtyard, after dealing with the guards you will see a guard standing in front of a bridge. This is another boss that you have to defeat in order to gain access to the doors. 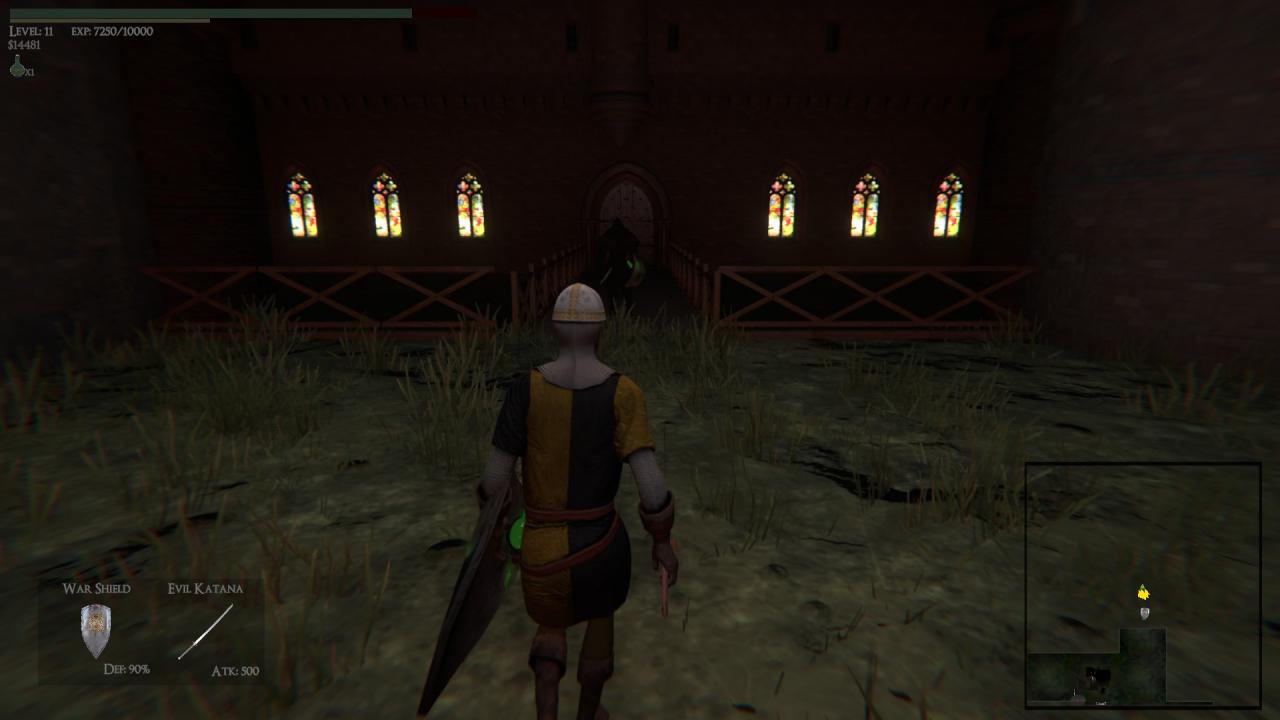 Just do the same as before and let your allies attack him if you don’t have a strong weapon and/or are low level.
Once you’ve defeated him, grab the keys and the sword + shield. Swap with your allies if needed.
Open the door and you get the achievement.

Now that you’re inside the castle, you only have a few guards left before finally facing the king again.
Killing the guards here give you decent amount of xp and a good sword + shield. 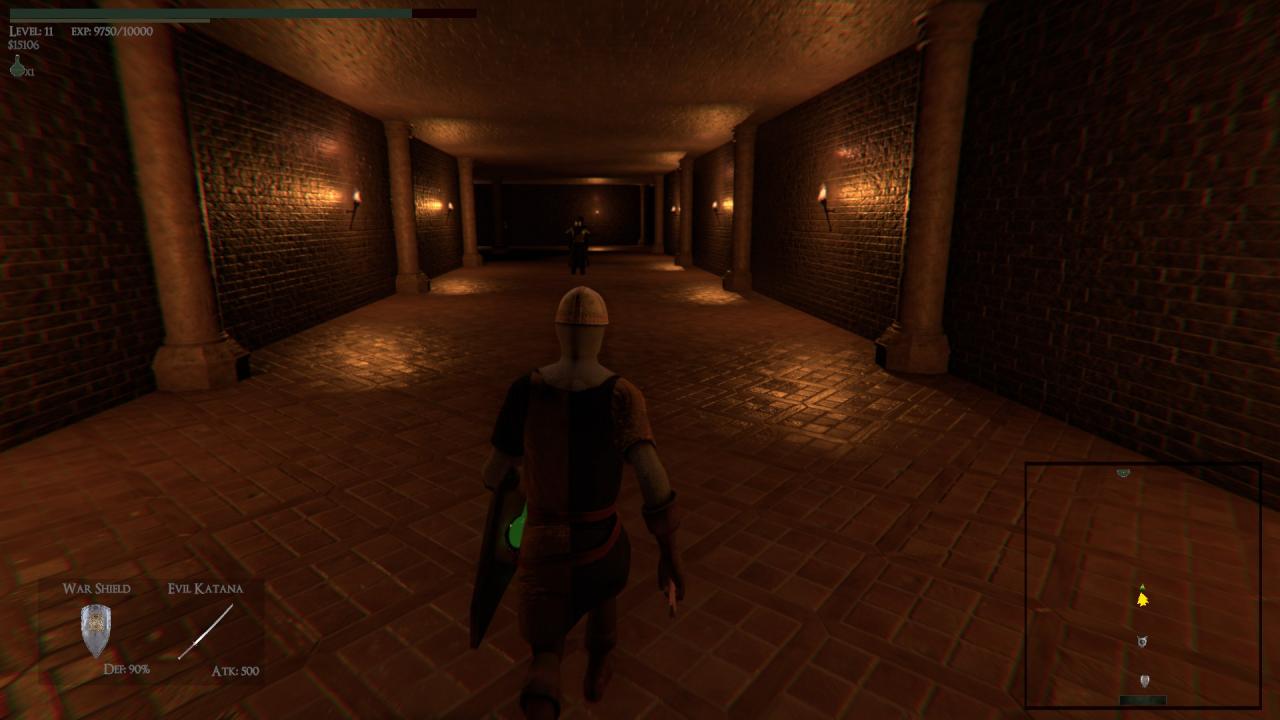 If you look at your level in the top left, you can purchase better weapons by the sellers. This ofcourse depends on how many times you’ve died. The best weapons are the Evil Katana + Royal Shield.
All swords damage scale with your level.

In this area you can swap the weapons from your allies with the better weapons from the guards.
You will come close to large doors again, behind them is the king.
Kill the guard and open the doors. 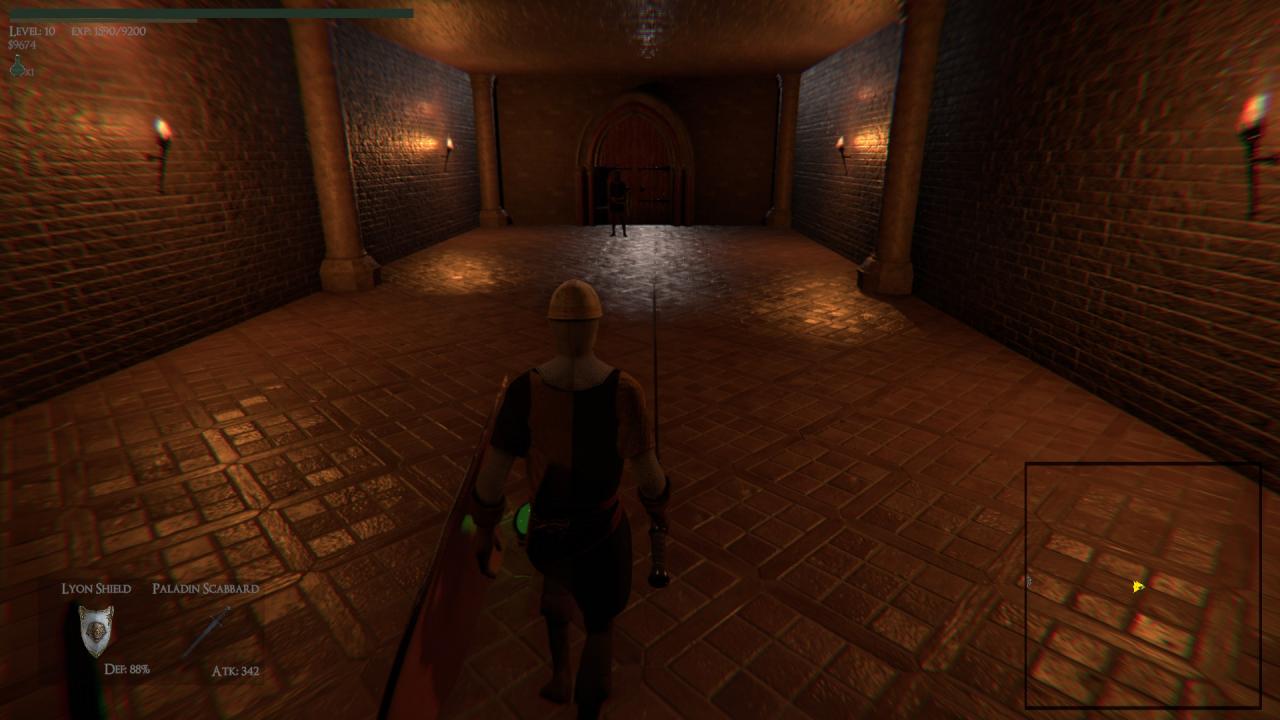 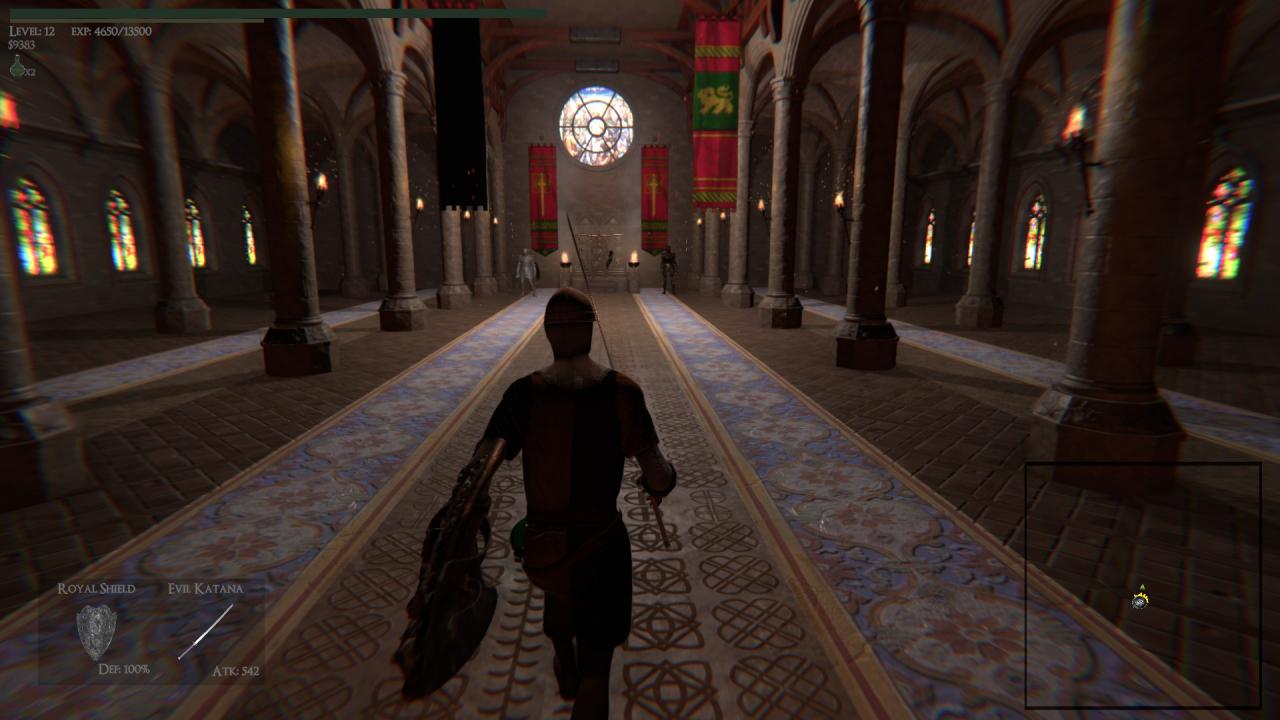 Just like the start of the game, the king can kill you in 1 hit so be very carefull.
Let your allies deal with him while you take out the guards.
Unless your allies die quickly you should have no problem dealing with the king.
He can be backstabbed, but also his attacks have a pretty long cooldown so you can get in a hit or two.
Once it’s over… 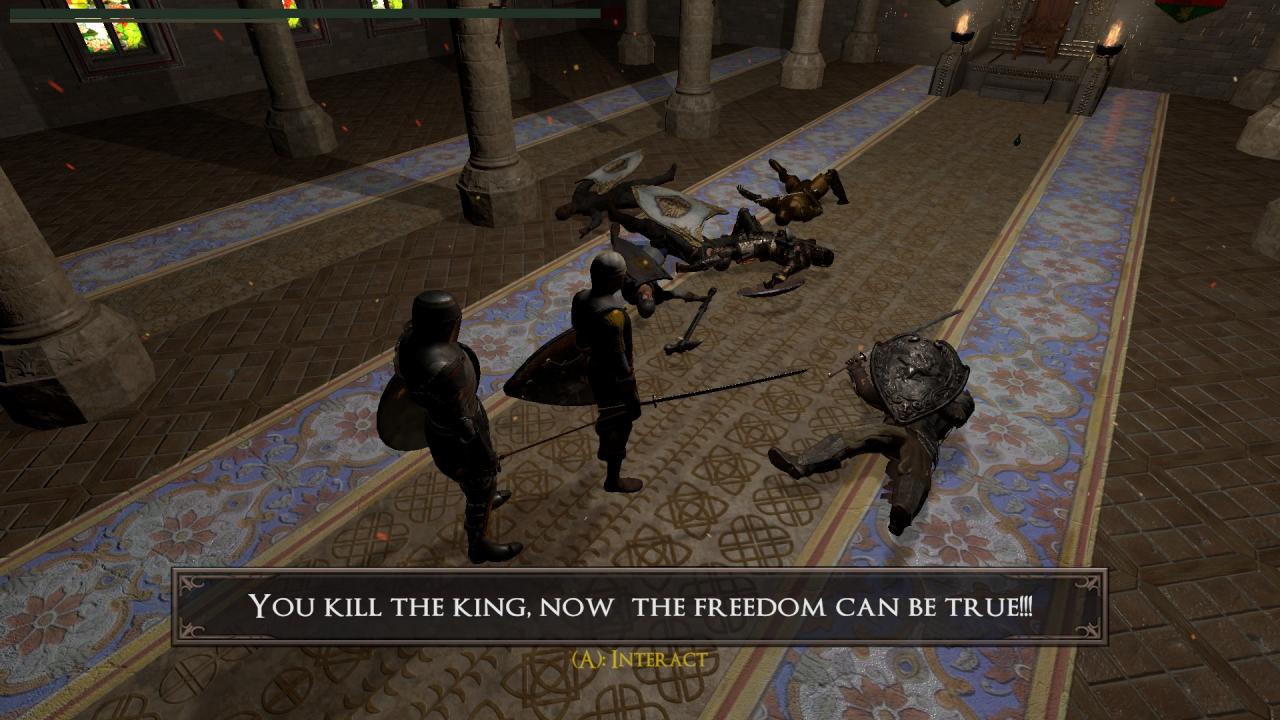 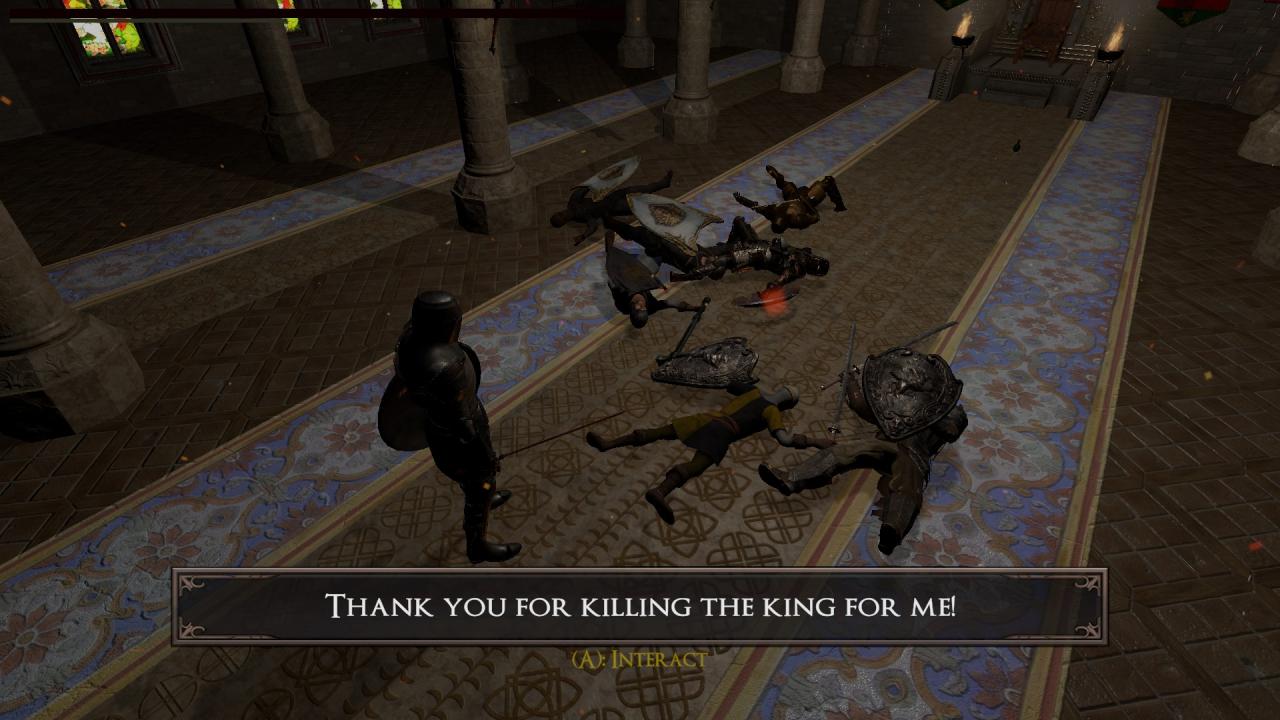 You’ve killed the king, here is your reward!

A New King
You kill the king…

The Unstopable King
The king returns after being defeated

In this section I will provide information about achievements you get during your playthrough or have missed.

You will gain these 3 achievements as you level up. You have to restart a few times in order to get to level 15.

You are starting to be strong
Reach Level 3

I’m not sure if the xp stays the same even after you die.

If you kill the guard that gave you the sword at the start of the game, after you picked up the key.
You will get this achievement.

Attack one of the sellers to unlock.

Fight against the capistalim
Kill some seller

You will probably get this as you move towards the castle. Unless you’ve died a few times then you will get it in the prison area.

Outside in the courtyard you have a few houses, one of them has stairs and a door that you can break through, unlocking the achievement. 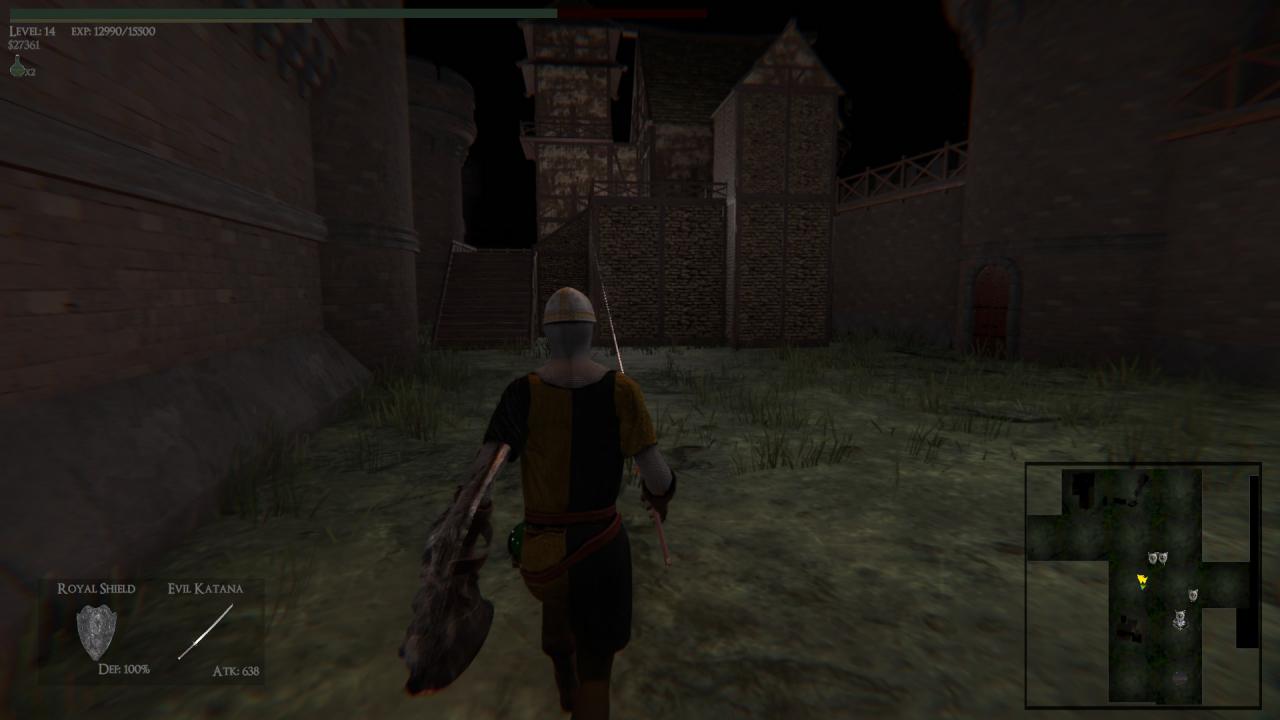 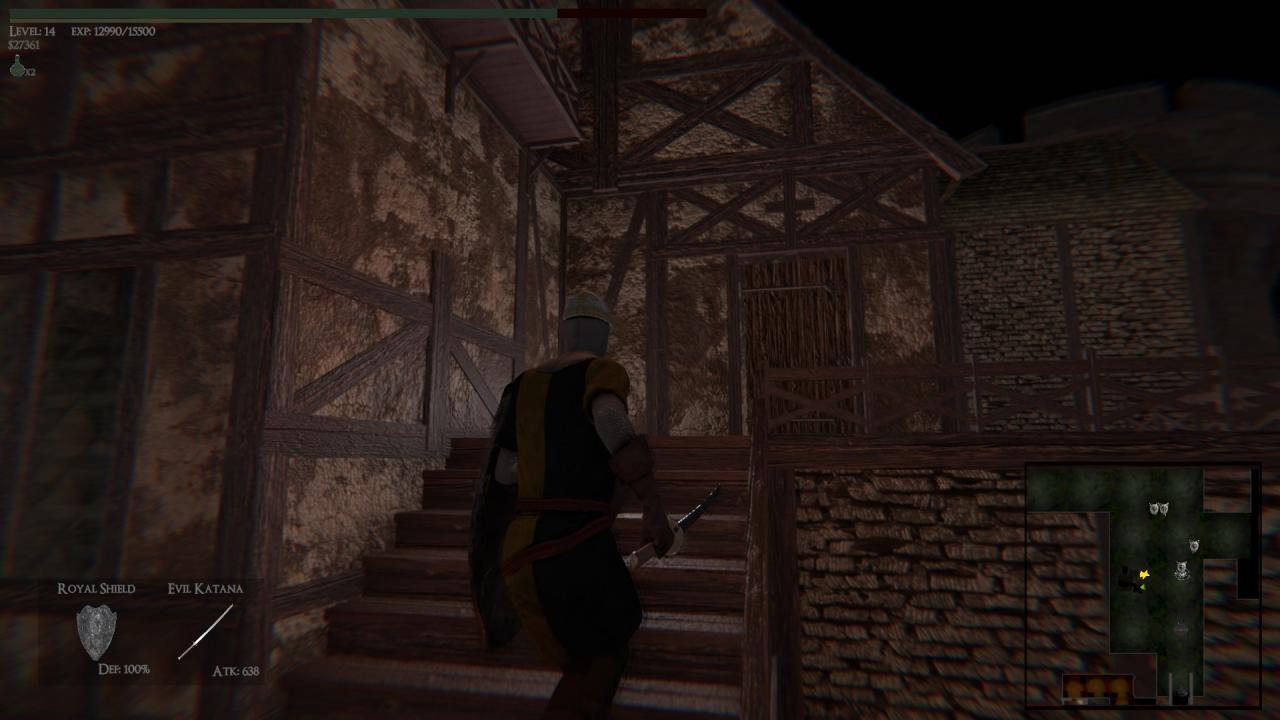 Doors can’t stop you
Broke the wooden door
By Flamember