A guide to playing Helmsley, the Gunn Powder Knight, by someone who doesn’t know how to make guides. 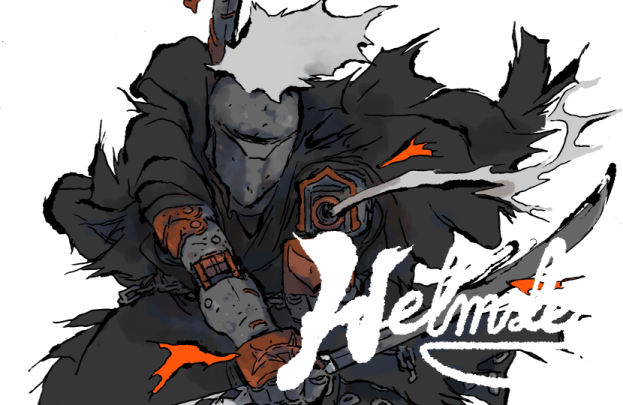 Helmsley is the first samurai added after the Early Access launch and is a pretty unique character to play. In exchange for starting with only a single bullet, Helmsley gets the power of the grind and is able to create ammo out of thin air just by doing sick grinds at high speed. He also has the ability to stomp on bullets below him to make them go down and does a lot of other stuff too.

– Hold DOWN while moving on the ground to begin a grind.
— Hold LEFT/RIGHT while sliding on a wall to grind on a wall and UP when upside-down from goo/slime blocks to grind on the ceiling.
– While grinding, a spark will appear behind Helmsley. Keep grinding to charge it up, which will give you one ammo when complete.
— The color changes depending on how close it is to completing, starting off as yellow, then turning blue, then giving you the ammo and returning back to yellow.
— The charge won’t immediately disappear if you stop grinding. Quickly returning to a grind will allow you resume where you stopped.
– The faster you’re moving, the faster the grind will be and thus the faster you’ll generate ammo.

– Helmsley will only start with a single bullet compared to the other Samurai’s three and Slug’s two.

– Unlisted anywhere is an effect unique to Helmsley that slows Helmsley’s walk speed down based on the number of ammo he is carrying. The more ammo Helmsley has, the slower he becomes when walking
— This also partially affects his grind, as successfully generating ammo will very briefly make Helmsley pause. The more ammo Helmsley is carrying, the longer this pause is.
— This does not affect his air speed or his actual grind speed, which means it’s not a big deal as long as you’re grinding or in the air.

Moving fast is very important for Helmsley since your grind speed depends on it. Again, moving fast = faster ammo generation. Grinding normally, while not bad, could be better. So instead, you want to use the boost you get from slashing to move faster and turn that speed into grinds.

While on the ground:

– SLASH forward and immediately hold DOWN into a grind. This is generally the main way you’ll be getting ammo in most maps. Do the same thing but hold UP when upside down.
– Try to avoid clanging on anything as that will slow you down a lot. If there’s no room to slash, just use a normal grind instead.
– As long as you have space to slash, you can grind on pretty much anywhere as long as it’s about 3-4 blocks wide by doing the slash ground back and forth.

While in the air:

– SLASH right after jumping for a large boost in speed. This isn’t really a Helmsley thing since nearly all characters rely on this for movement but it’s especially nice on Helmsley for moving around and grinding
– SLASH down (or forward if you’ll hit the ground) before landing to do a faster grind.
– Interestingly, you don’t lose as much speed when clanging on something in air compared to on the ground. In fact, jumping then slashing down into the ground before going forward and landing into a grind still lets you do a fast grind.

While on a wall:

– SLASH down when grinding on a wall to go down faster

Moving even faster with grinds

You can actually go really fast by chaining grinds and sword jumps. Since grinds conserve your speed and is on the ground, it means you can do a sword jump, start a grind, recover your slash boost since you’re on the ground, and jump out of it with another sword jump. Just remember to jump out first before slashing or else you lose all of your speed.

A comparison between grinding normally and adding a slash at the bottom of Cellblock:

Grinding on a small space

The bullet stomp is a surprisingly versatile tool in Helmsley’s kit. While it might look like it’s just used for offensive purposes, it’s actually pretty good for both offensive and for movement.
For Fighting:

– Stomping your own bullet recovers your slash boost even if you haven’t touched the ground yet. You can then slash in any direction for a boost in that direction, just like doing one after jumping.
– You can chain this multiple times to go really fast, though you’ll probably hit a wall very fast if you’re not playing on a looping map like Beach Head.
– Shooting, slashing, and stomping at the same causes you to go really high. Not sure why this happens but it’s very useful. Be sure to avoid clanging on the ground though, since it stops working if you do.

Helmsley’s gameplan revolves mostly around his grind. Generally when you spawn into the map, you want to quickly find and go to a good grinding location and get some ammo before the other player tries to kill you. Everything after that is really up to you. You can choose to grind ammo for bullet spam, you could use it on bullet stomps to move around, or you can choose to use the grind to just move quickly.
Random Tips:

– Almost always be grinding instead of walking. Helmsley’s walk is weird and is very slow if you’re carrying even a few ammo. There are a few situations where you’d rather walk instead but those are rare.
– When bullet spamming, spread your bullets a bit by delaying your next bullet after firing. This is so that the other player can’t just reflect every bullet in a single slash.
– Look for long flat surfaces to grind on. Most maps have a few spots that are great for grinding, like the top area of Playground and the bottom corners of Among Us. Horizontal surfaces > Walls most of the time, though some maps like Moat don’t have much flat ground and prefer grinding on walls instead.
– If the other player is out of ammo, you can dash spam instead, which is harder to counter since the only way to kill someone in a dash is with a bullet.
– Remember to use your ammo. There’s not much reason to hold onto your ammo since you can grind more after using them, as well as the fact that you’ll lose all of your ammo if you die.

The 1CE aka One (1) Clip Explosion is a technique that lets you fire two super bullets using just 3 ammo (1 clip) in order to create a massive explosion. While normally risky due to the fact that it would use up all of your ammo in order to do it, Helmsley does not care for he has all the ammo he would ever need and can spam as many 1CEs as he wants (after grinding out 3 ammo of course). 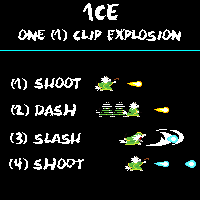 1CEs are pretty difficult to do and needs practice in order to do it consistently. You don’t need to know how to do 1CEs for Helmsley to be good. However if you do manage to get consistent at it, it really elevates Helmsley from “ok to great” on most maps to “pretty good to probably the best character in the game”.