I just completed the game and would have appreciated a guide to help me, so I’m sharing my notes so others can benefit! Spoiler Alert!!!

You will need to play through this game 4 times to get all the achievements. And I do mean 4 separate times (from beginning to end), you won’t be able to use saves to get the different endings.
You can save on the first page of your journal, if you need to exit the game.
There is a button to skip dialog that I used a lot in my latter playthroughs, look it up in the options should you need it.
I only played the Extended version of the game and I’m not sure why the ‘lite’ version exists at all.
‘New Game+’/’New Game++’
After completing your first playthrough, you should unlock ‘New Game+’, which will change your experience slightly. I do not know if it unlocks only after Marion expresses her doubts about Alder (which was my first playthrough).
Completing the third playthrough (where Marion stays with Alma) should unlock ‘New Game++’.

While you can play the game differently, I suggest for this first playthrough that you take Anders’ side on every conversion with Alma (denying the problem). You trust him, you don’t know if Alma is right, etc.
By doing this, you will see a more natural progression for Marion throughout the playthroughs.
Chapter 4 should be titled ‘Troubled Feelings’ and the achievement of the same name should drop at the end of the credits.

For this playthrough, you should admit your doubts about Anders.
Chapter 4 should be titled ‘Defier of Fate’ and the achievement of the same name should drop at the end of the credits.

Finally, you can take Alma’s side and agree with her that Anders has a problem.
Chapter 4 should be titled ‘A New Beginning’ and the achievement of the same name should drop at the end of the credits.

Repeat what you did for the third playthrough. You will see additional flashback sequences.
Chapter 4 will still be titled ‘A New Beginning’, but the characters will talk about going to the beach in the ‘cutscene’ where they look at the sky. 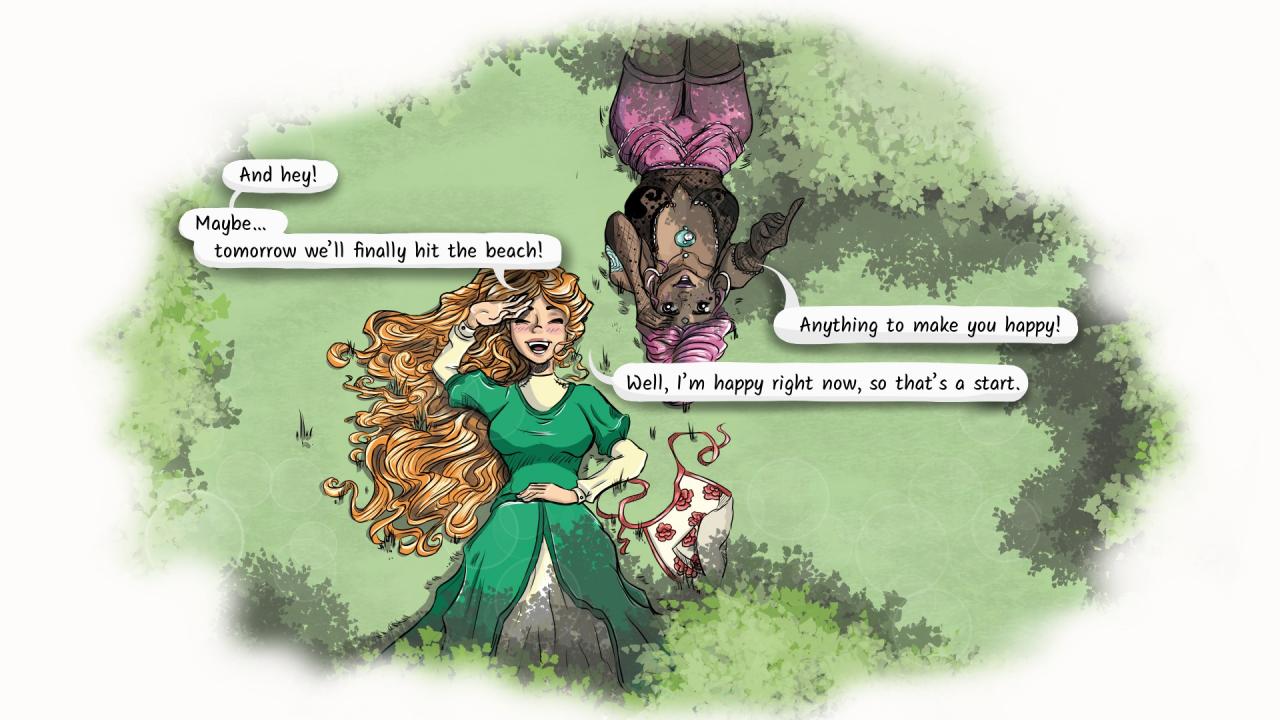 After the credits, Marion and Alma will talk some more and finally go to the beach, giving you ‘The Other Promise’ achievement.

Many achievements correspond to the ‘Tales of Seallea’ collected in a new section that appears in the menu after you complete your first playthrough.
This section has these subsections:

‘Under the Same Sky’ should unlock at the end of the credits for your third playthrough.

‘Unbreakable Bond’ is certainly influenced by meeting Diggory by the lighthouse and probably by helping Salvius and Camellia come together.

‘A New Guiding Light’ might be influenced by either giving the fishes to the dog, finding the astrolabe or playing with Seren, or a combination of these.

‘Memories of Seallea’ should unlock in the third playthrough, when Marion stays with Alma, if you’ve collected every treasure for each character during that playthrough.

‘Good Boy!’ will unlock if you pet Dotter five times. It doesn’t have to be five times in one playthrough, but how can you resist it?

‘The Other Promise’ will unlock after the fourth playthrough (after the credits, once the characters get to the beach).

During Chapter 3, you can gather 6 objects (‘treasures’) by exploring the world once more before venturing past the bridge to the forest. I advise you to skip the hunt for the first two playthroughs as it just makes the game longer.
Here’s the list of location for these treasures: (with more information in the spoiler tag)