Skinwalker Gloomweaver is probably going to be one of your later villain unlocks. In order to meet the pre-requisite games, you need to have unlocked Spite: Agent of Gloom.

The unlock criteria for this variant form of Spite meets the pre-requisite game requirements for Skinwalker Gloomweaver (Defeat standard Spite and Gloomweaver).

Spite: Agent of Gloom
Defeat standard Spite. Then, defeat GloomWeaver by having 3 villain relics in the villain trash. At least two of the following must be in play: Cursed Acolyte, Profane Zealot, Chosen Disciple, or Ophidia the Deceiver. No Voodoo Pin may be in play.

This variant villain card is unique that you can do one of two options for the unlock. I won’t go into why losing is complicated and actually harder to do but if you need an explanation, read the description for TheHeroOfLight’s Unlock Video. He has a whole video series guide on how to do unlocks and is deserving of a Follow/Subscription.

To get through the early stages of the fight, you will want to rewind if you don’t like the order in which Spite’s drug cards are revealed. I preferred to save his damage reduction for last so you can burst down his health as you work towards this setup.

Mynd-Phyre should come out first – keeps the environment deck a non-factor and you take 1 psychic damage each turn. You can eventually mitigate it with Lead from the Front + Fortitude (Legacy) or Stun Bolt + Smoke Bombs (Wraith).

Demon’s Kiss should come out second – Infernal damage is pretty common from Spite as a damage type and 1 damage isn’t bad. You will eventually shoot for immunity to it with Legacy’s Lead from the Front + Next Evolution combo.

Up to you on the last three drugs but again, I try to aim to have Compound Omnicron come out last. We are running a 5 man team and -3 to your damage is nothing to sneeze at. 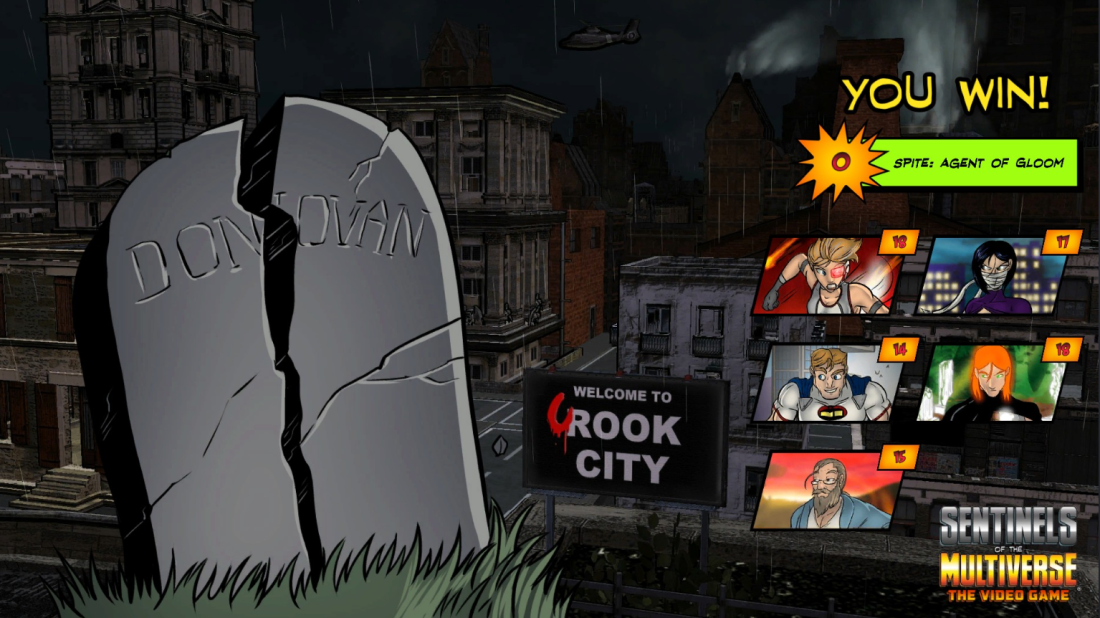 Team Leader Tachyon
Her hero card power helps you draw your deck very quickly and can do plenty of damage early on with multiple card plays on her turn if you can get the “HUD Goggles” out. Later on in the fight, her damage becomes useless due to the damage reduction and her sole purpose is card draws from her innate power and “Fleet of Foot.” When this happens, you can then use her multiple card plays in a turn to put out equipment or ongoing cards that you can retract later from Spite’s drug abilities.

Two small things she can also do is use “Blinding Speed” to get rid of villain Ongoing cards and in the mid-game, she can use “Synaptic Interruption” to reflect Spite’s attacks back on him.

Wraith
The biggest perk of Wraith is the nemesis damage. When Spite gets his damage reduction out, the nemesis damage plus “Micro Targeting Computer” plus damage buffs from Legacy will make her your most consistent damage dealer.

The most important card to get out early is the “Smoke Bombs.” Damage reduction and redirection is huge in keeping your team alive – especially Legacy. “Mega Computer” is also super important to make the environment damage non-existent. Toxic Sludge hurts a lot but 3x Mega Computer cards nullify it completely.

“Infared Eyepiece” helps to manage Spite’s card draws. My last two cards in Spite’s draw pile with 4 victims in the Safe House was another Victim card and then Forced Entry. Forced Entry pulls them all out – what you needed to do anyway the next turn – but it also kills one. Infared Eyepiece helps to search for the Victim cards you need and has them come into play when you want them to. Took me 5 more rounds to draw the one I needed.

Legacy
I put Legacy in the middle but really he just needs to come after TL Tachyon (card draws) and before AA (extra power play). Honestly, he would be better as #2 and Wraith #3 but regardless, one of the most important cards in his deck is “Lead from the Front.” Giving you the choice when he redirects damage to himself is huge. Really you will see 4 damage types in the game and the most common 2 are Infernal followed by Toxic. As soon as you can get “Next Evolution” out the better and you will want to make him immune to Infernal damage.

If you can get “Danger Sense” then you can have Legacy absorb all the environment damage too with Lead from the Front because he would now be immune.

A really helpful card in this particular fight due to Spite’s Compound Upsilon is Legacy’s “Inspiring Presence.” He can retract the card on the villain’s turn and play it every round which will give a damage boost and +1 to health for the whole team every round.

Argent Adept
Argent Adept has an awesome combination he can run using his base card power which is to Perform any card. I try to get “Alacritous Subdominant” out quickly in order to be able to allow your team to get setup faster. You don’t even need an instrument.

The next two cards you are looking for are “Inventive Preparation” (again for the card play) and “Telamon’s Lyra.” You need the Lyra otherwise Preparation is useless. The nice thing about the Lyra is in the early game, card plays is most important – you are providing 2 per round using your power for anyone 1 or 2 heroes on your team. You can even retract the Lyra every round and play it again until you find the last card in this combo.

In the late game, you will want to use the same instrument but with “Inspiring Supertonic.” This will allow you to give Legacy a second use of his Next Evolution power. Now Legacy is absorbing all Toxic (heroes taking damage from using powers) and Infernal (Spite does a lot of Infernal damage on his turn) damage – all with only one card in Legacy’s play area.

Other helpful cards are “Vernal Sonata” to get healing – Spite will likely reshuffle your hand before you can draw the top card – and Arcane Cadence – get the cards you need both in play (1x) and in your hand (2x) before they can be shuffled away.

Scholar
Scholar is great because he has natural healing, can tank a ton of damage from Wraith’s Smoke Bombs and as you grow his hand size he can do a ton of damage in a single turn by burning his whole hand using “Know When to Turn Loose.” This is great to do Round #4. I got around 20 points of damage to Spite when I used it thanks to TL Tachyon.

First, you are going to want to control the drug order and when they come out. Next, you will want to burst Spite down from his max of 80 health to around 20 or less before the last drug (damage reduction) is in play. Last, don’t freak out if Spite is flipped and you don’t kill him immediately. I went close to 5 rounds after he flipped before I killed him.