A guide to explain the new map, where to find ores and animals and basically anything i can think to add that may have changed in V12 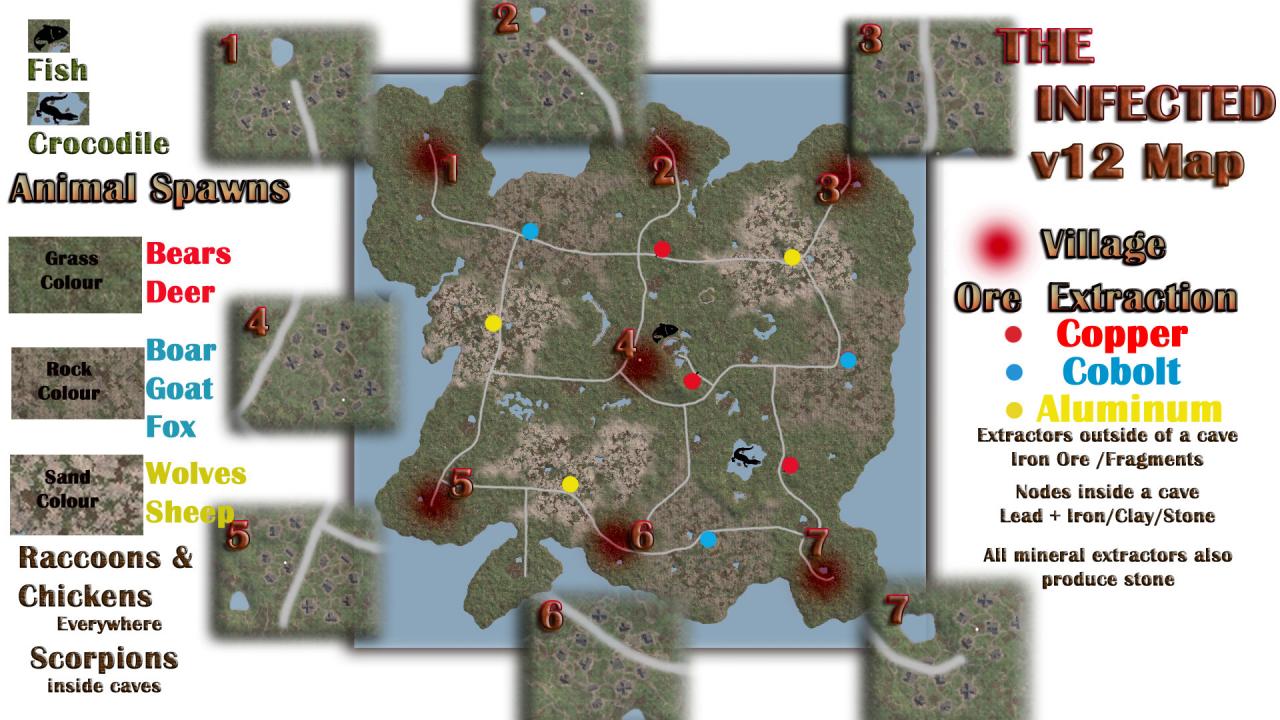 This is the map I created as a quick reference to what is where, but i hope to explain in the guide the mechanics behind where stuff is so you don’t need to use it.

As before pressing M will bring up the game map, but unlike before we can now zoom in to see the map in more detail. This feature makes searching villages so much easier, I haven’t put up a single ghost marker when searching villages yet (apart from to mark truck location).

In the previous version we would spawn in to the game in one of the 3 copper sites, this has now be changed, your spawn point will be at any of the number of small pools of water dotted around the map. This gives us a lot more possible starting variations, you can of course still chose to build where ever you want.

The villages can easily be found by using the zoom feature on your map.
There are now 7 Villages to search instead of 6 and you are still looking for 2 blueprints in each but we now have 14 to find as the power(Junction Box) and Oil pump has now been added to the list.
There is a guide that explains the blueprints in more detail.
The truck will still also randomly spawn in one of the villages and there is a guide for that too

ALL rocks now mined outside of a cave will harvest small stones only, the only way to now mine copper, cobalt and aluminium is to build an extractor inside the caves. The copper screw requirement has been removed from building it.
The one obvious exception to this is the slim clay rocks that remain the same as before.
Inside the caves we now have 2 more rock types the lead ones that as before will drop 2 lead and a chance of either clay, stone or iron ore
And Coal nodes which will give us 3 pieces of coal each, these have been added as we no longer get coal from the extractors
There are no nodes inside the caves to indicate what the extractor will harvest as we were used to before.

Building a mineral extractor anywhere outside of a cave will result in finding Iron ore, Iron fragments and stone regardless of the biome it is built in.
To mine the copper, ally and cobalt we need to build the extractor INSIDE the caves, the caves are marked on your in game map with an X
There is nothing in game other than trial and error to tell you what cave yields what minerals without first building the extractor to see. We did get told however that each cave will only extract one type of mineral.
Luckily for you players on the forum have done that trial and error for you and can pass on that the map is split into 3 different biomes which can be clearly seen when looking at the map.

The caves are divided equally between the 3 biomes giving us 3 of each mineral cave. Through playing we can also pass on that:

You can build many extractors inside a cave so no need to visit anymore than 3, as long as the 3 you visit sit in each of the biomes. A good tip when building your base is to pick a location that suits this as you will probably only make the trip to the villages once but the caves you will visit many times.

The build restrictions have been removed inside the caves, it is not just limited to extractors. This helps no end with things like lighting and something as simple as resting a chest, as well as open up the opportunity for interesting builds inside them.

Animals have also been altered in this map, we now have chickens and goats as well as all from before. They will spawn less often and will now need to be butchered to harvest the meat, but we will get more meat in return. They now require transport in the cart or truck unless you want to move like a snail. Butchering an animal will also require hands to be washed or you may be poisoned. Where you will find them has also changed.

Crocodiles
Can still only be found in the swamp as before and the swamp location can easily be seen on the map. We now only need 4 hides to make our large bag but I would advise, unless your base is very close to take your cart with 2 chests to the swamp with 10 iron Ingots to make a butcher table there. The cart is needed to carry the croc unless you can lure it to your table before the final blow. You may not need two chests for the ingots on the way there but you will for all the meat on the way back.

Fish
Unlike before the fish will now only spawn in the lakes surrounding the Icon on the map, one of the major uses for fish has also been changed as it is no longer a part of the stew mix. We also end up with an abundance of meat for easy bio fuel and chickens can be found all over the map for easy protein with no need of a butchers table.
Unless you have a love for spearing fish there is NO need to join the hoards that insist the only viable place to build is the fish lake.

Scorpions
Can still be found inside the caves as before and can also be killed for easy meat without a table.

Chickens & Raccoons
are unique in the fact that they will spawn in ALL biomes, Chickens as I said before are easy protein that require no table that also drop feathers (for arrows) and Eggs (for curing poison and rations)
Raccoons do however need the table and no longer drop hides.

Boar Goat & Fox
now only spawn in the brown areas of the map. we have been told the goat will be part of the husbandry when it is added but currently can just be killed like the others.

One animal kill (other than fish chicken or scorpion) will yield 1 Raw Liver this is the replacement for fish in the stew mix recipe.

Animals may take a little while to show up at a location, so spend some time in one if you are wanting to kill something specific

Hopefully covered most of what has changed so far on the map but let me know if I missed anything and I will gladly add it.
My tip for a good base location
…is the cobalt site the right of the map, its not far from all 3 minerals like I explained above and building here will spawn plenty of easy boar and goat to kill to easily obtain the hide for your quiver, its also not too far from fish and crocs. Just don’t put your first extractor in the cobalt cave as ally for flask and copper for helmet are much more important first.
By sleepygamer