A how to guide for surviving the early game as Syracuse, one of the harder nations to play in Divide et Impera. 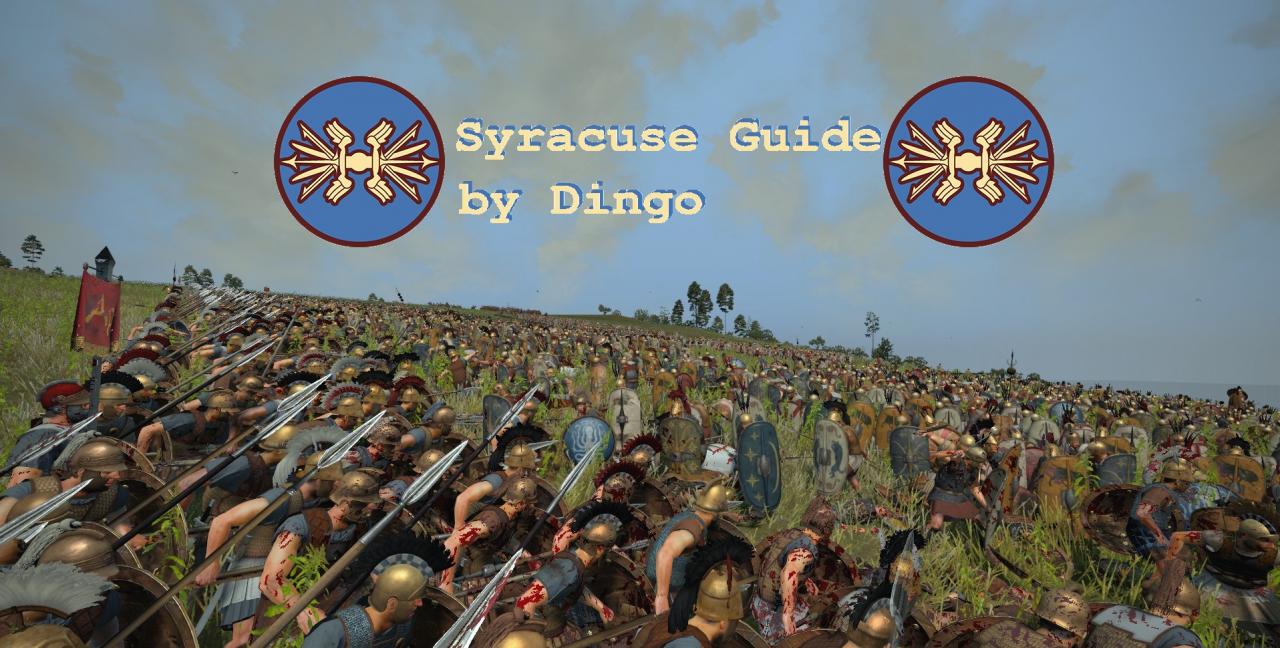 Syracuse is the biggest underdog in TWRII and sits in the unfortunate and precarious position between both Rome and Carthage.

This guide will reference early game as the point in time where your self survival is paramount and expansion is limited if even possible. Mid game is the point at which you are now beyond that threshold and have a freedom of choice on how to expand instead of being the victim of circumstance. Late game is not covered in this guide.

If you have been struggling to achieve any early to mid game success as Syracuse you should be able to break into mid game quite easily with this guide.

To do so, you’ll need to do three things correctly:
Diplomacy
Building
Recruitment

But first,
It’s all about the first turn. 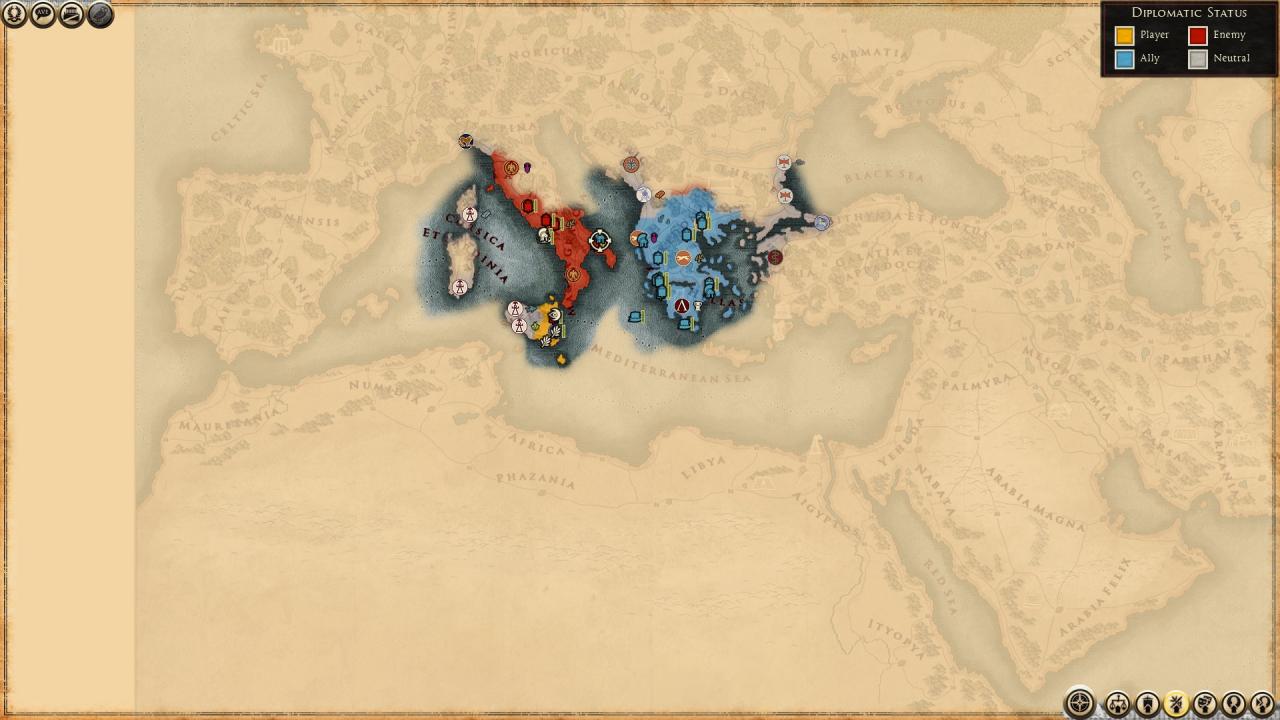 Diplomacy is incredibly difficult as Syracuse as both Rome and Carthage mistrust you due to your alignment with Epirus.

So to fix that, I recommend breaking any diplomacy you have with Epirus on turn 1. Making this decision will stall war with either of the two big dogs. Make no mistake, war with Rome is not avoidable. But war with Carthage is and should be avoided until Rome is dealt with. Carthage will have positive relations with Rome until a certain point in the timeline. Until that point, playing both sides is recommended to stall. Taking the island of Sicily may seem appealing, but holding it from your fortress in Syracuse is more difficult than it sounds. It is better to defeat Rome and take over greater Italy before unifying Sicily.

Breaking off diplomacy with Epirus will also ease the transition into diplomacy with Athens and Sparta due to Epirus’s Hellenic diplomacy penalty. Epirus usually is killed by Rome between turn 30-60, and by this time, Athens and Sparta should be your allies and helping you fight Rome if Rome has declared war on you while you had defensive alliances in place. This will give Athens and Sparta war targets they can attack as they will never cross the ocean onto Italia to fight.

While Carthage is less likely to attack you while you are in league with multiple Hellenic nations in defensive agreements, Rome could care less and sees themselves as an invincible aggressor, which they are…for a time.

Your diplomacy should look something like this from turn ~20-60~ 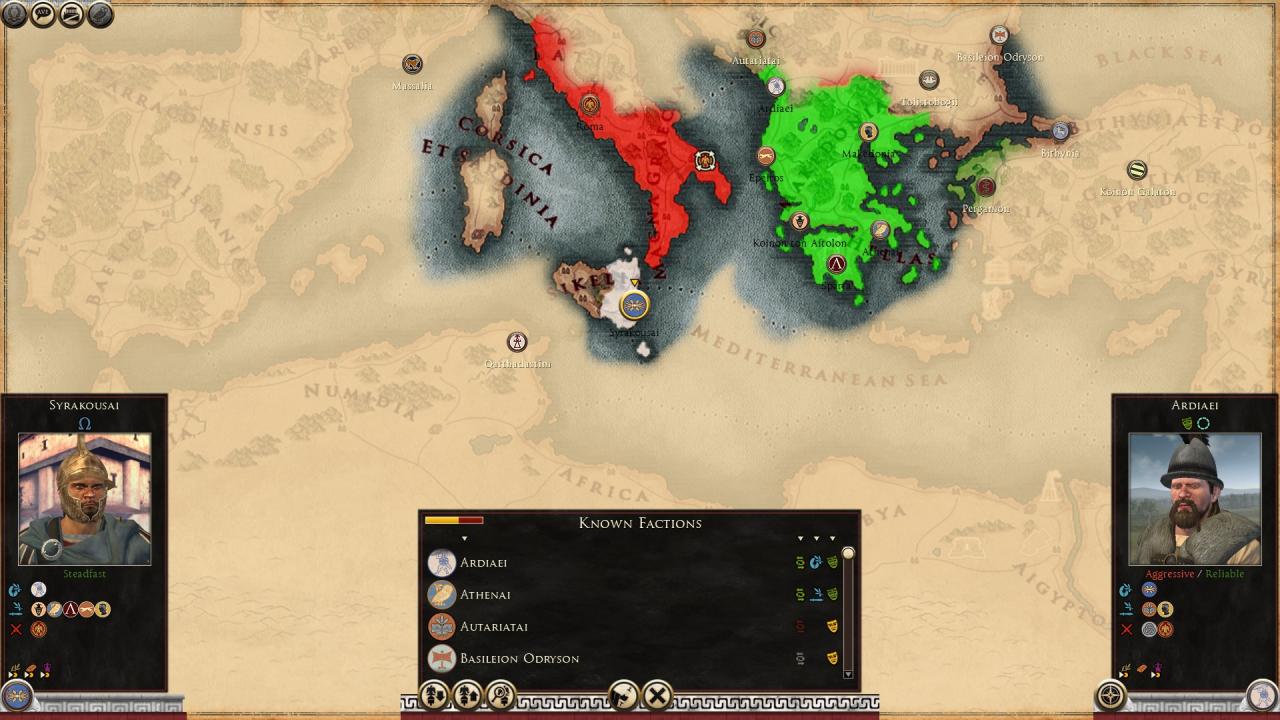 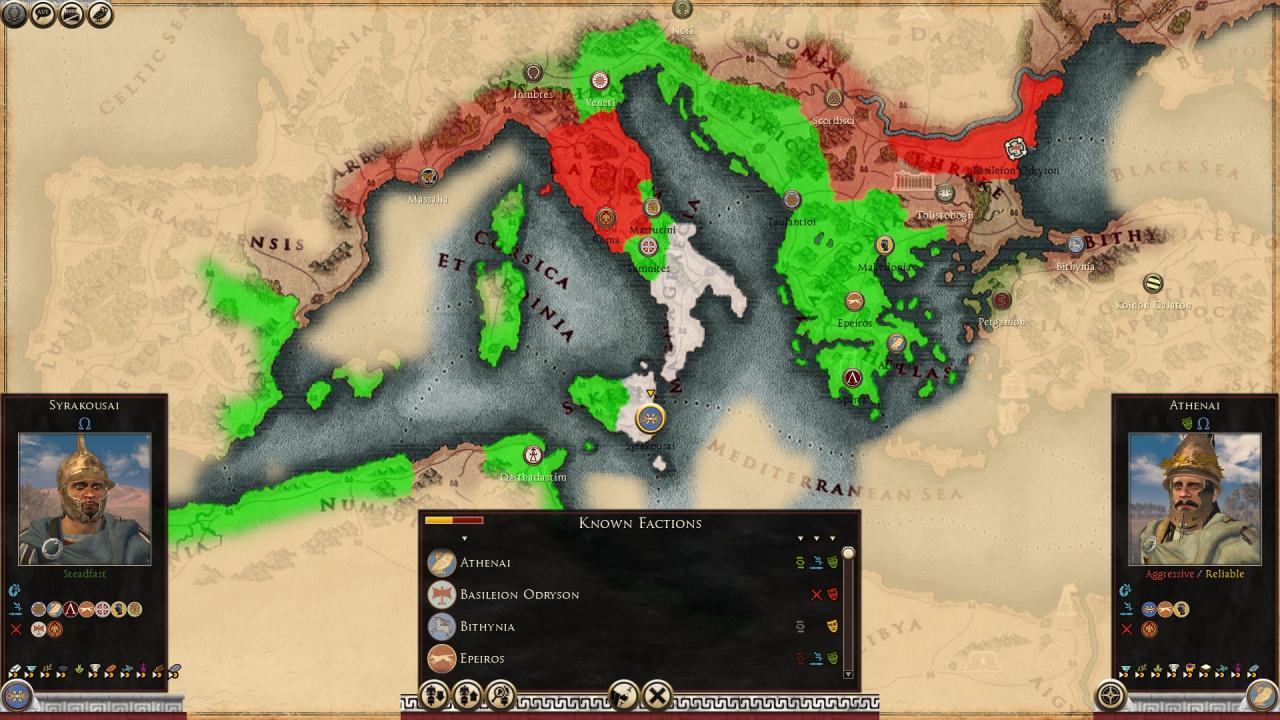 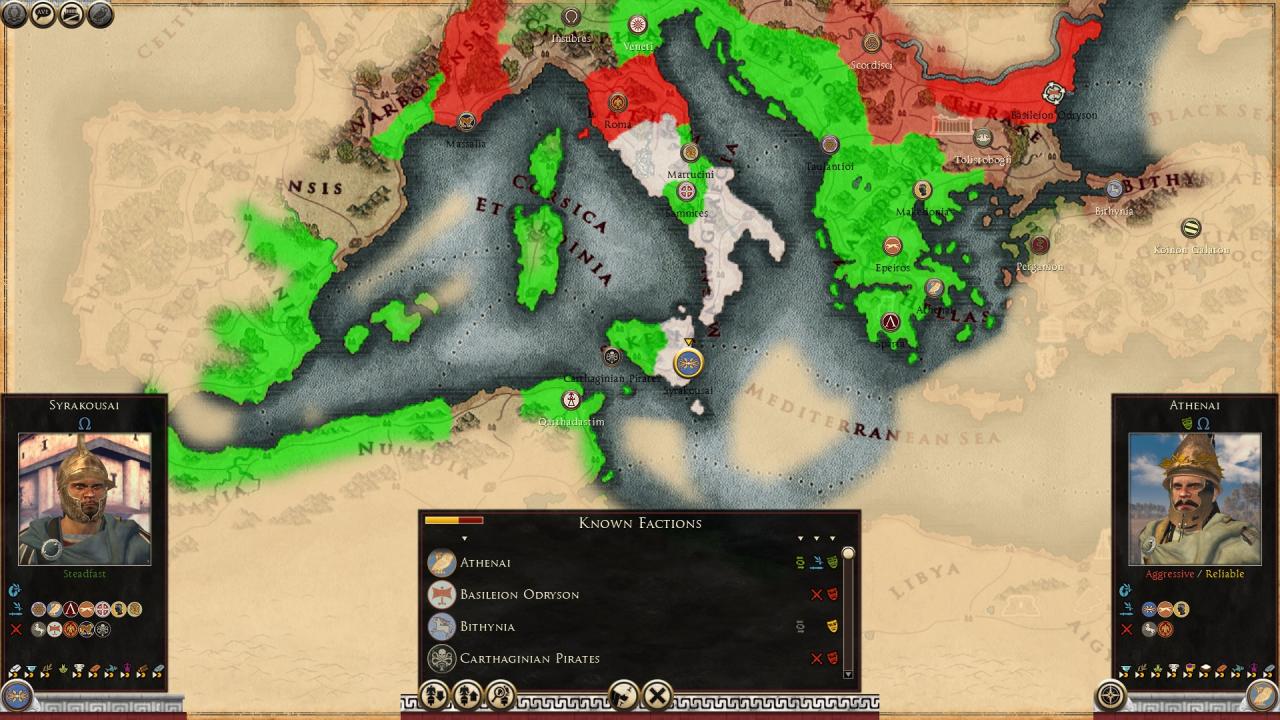 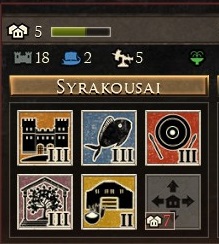 Pictured above is my mid game Syracuse. To get here you’ll need to do two things.

Set your taxes to the lowest possible setting when possible. You’ll have less spending money, but the growth to get your fourth and fifth slot in Syracuse is well worth it.

Fishing Port will give you an extra food income that is indispensable when Roman armies are raiding your mainland and your army isn’t big or strong enough to fight them in an open field.

Hoplite Barracks is a no brainer that will allow you to recruit a diverse spread of units as well as add to the garrison of your fortress.

Fourth and Fifth buildings: do whatever you want here, by this time you have achieved mid game most likely and are now on equal footing with Carthage and Rome has been conquered. I have a Supply Pit in my fourth slot as I was still turtling due to some unlucky early expansions around turn ~40.

On your first turn you will have around ~20,000 currency to spend.

Use this money to recruit the maximum amount of agents which is 1 Champion, 2 Administrators, 1 Spy. Use your Champion as either an assassin or to train troops in a secondary army. Use 1 Administrator as a governor in Syracuse to increase taxes and cultural conversion. Use the other Administrator to decrease the maintenance of your main army. Use your Spy as a sabotage master in order to cripple Rome’s armies when fighting them, limiting reinforcement potential.

Agents will be incredibly useful as most of the time you will be outnumbered and outmaneuvered by Rome. 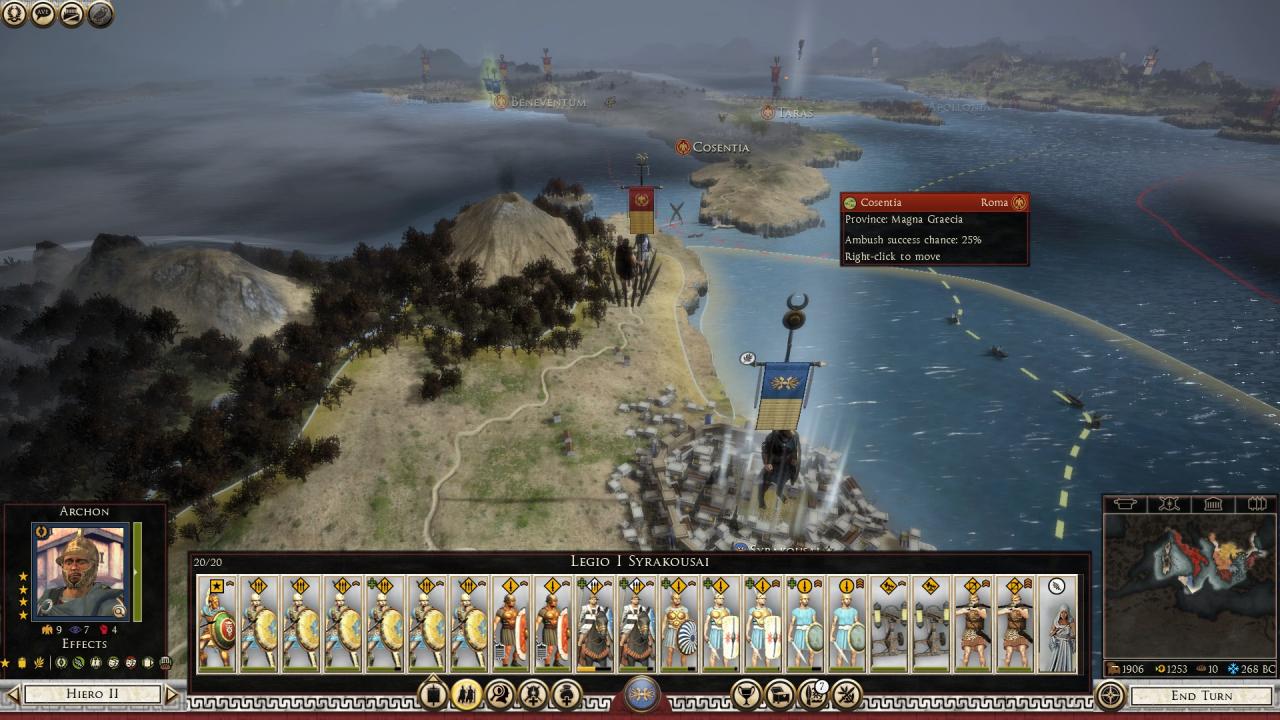 Good Generals
While your Archon will start out with a drunk wife and as a mean husband, queue the soap opera, as your faction leader it’s worthwhile to increase his rank overtime to decrease troop wages, maximize troop abilities, and unlock special battle abilities. In addition to Army Traditions, having a good general will allow you to go toe-to-toe with a Roman legion. Rome has the strongest roster and without every available advantage you’ll find yourself routing before them frequently. This takes time, but by turn ~30-40 your Archon should have three to four stars and at least a few traditions in their army to offset the disadvantage.

The Right Army
While army configuration is highly subjective, I’ve listed nine regiments you can recruit I consider necessary for success. Any units that I have not listed are not considered useless, but perhaps B-List or require different tactics than those I employ. 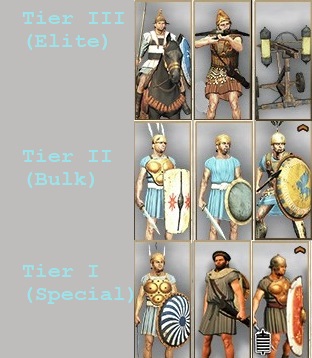 Tier III are the units that fulfill needed but limited roles as “elites.” Cavalry are glass cannons, and in DEI they are more glass than cannon. You will only ever need two, four at most, cavalry to flank and chase down fleeing soldiers. Most flanking can be done by light infantry and is more effective. I recommend the Syracusan Citizen Cavalry as their survivability is better than the lighter skirmisher cavalry and their stats are decent.
Syracuse is one of the few nations that has Crossbow Infantry. In addition to Oxybeles, you can out range any army perpetually making you a defender in every scenario despite circumstances. You will never need more than two of each of these units, and I recommend one Oxybeles and two Crossbows. These units usually break even for their cost as killers, but they don’t offer over-the-top K/D ratios. The purpose of these troops is to prevent your enemy from holding a defensive position, something Romans love to do, placing their armies in Fortified stances. With these units, Roman legions are at a severe disadvantage to the killing funnel created for siege and range units by their Fortified stance.

Tier II are your bulk forces. These are not the best troops you can hire, but for the price they are the most cost efficient and worthwhile. Syracusan Hoplites are your best line holders, Sicilian Footmen can capably hold a line and flank, and Sicilian Levies are cheap fodder than can effectively distract units for a time and flank. Your army should be mostly made up of these units due to their cost and ability.

Tier I are units that can be considered options given you have the income or necessity for alternative options. Greek Archers are only useful due to their flaming arrows ability, but otherwise are out ranged and outclasses by Crossbow Infantry. Recruit them if you don’t have access to Crossbow Infantry, flaming arrows isn’t useful as your armies will always have lower morale than Roman legions. Both Samnite Medium Infantry and Bruttian Infantry feature better stats than your regular Sicilian Infantry. Unfortunately, Samnite Medium Infantry is twice as expensive and Bruttian Infantry roughly one-and-a-half. If you can afford them, go ahead and recruit them as they will outperform Sicilian Infantry, but most battles can be won with your regular countrymen.

Pictured below is one of my typical armies, then an after battle on a Fortified Roman Legion where I employ a killing funnel on their fort with my Crossbow Infantry and Oxybeles. 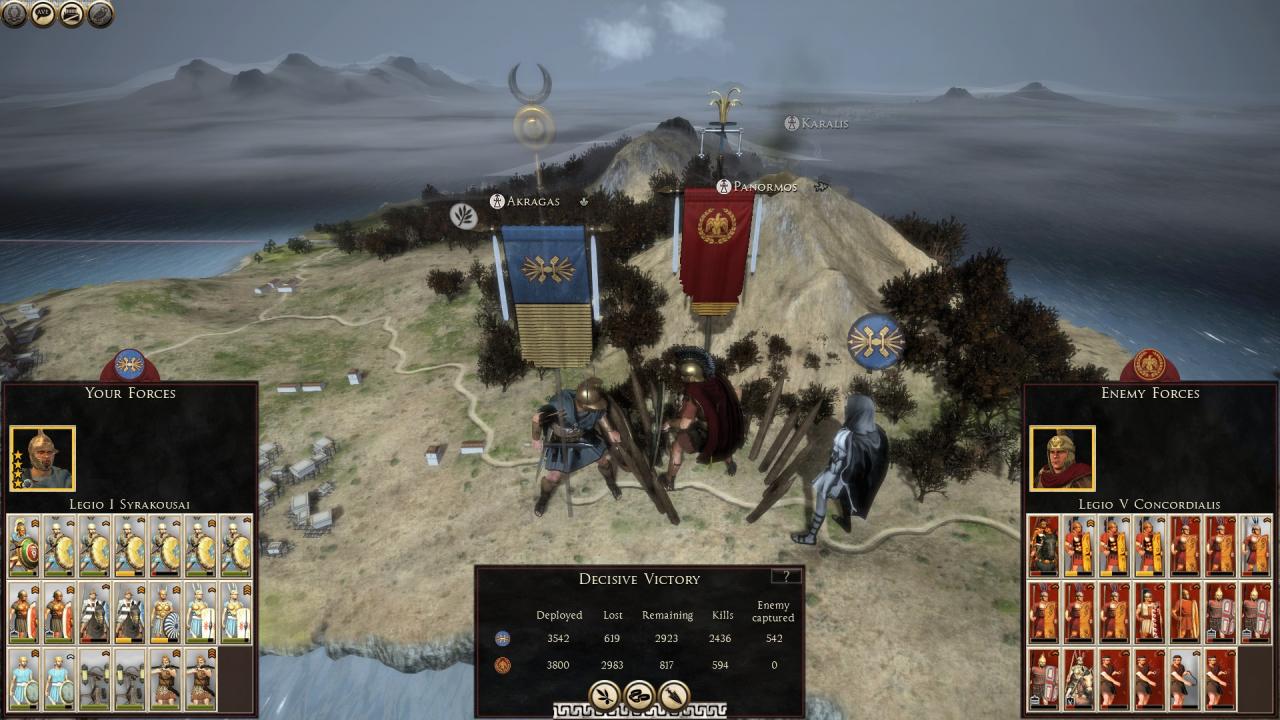 While you won’t be able to take provinces without an army, a navy can effectively bait Roman legions into the open ocean to be rammed to death in their transport ships.

A small navy of around eight ships will suffice, as a Roman legion of 20 will think they can overpower them in the open ocean. What the AI does not account for, though, is that naval ships can destroy an infantry transport ship with a single ram hit. Due to this, eight ships can effectively destroy an entire army with limited losses, if any losses.

The only ships you’ll need are pictured here. I recommend the cheapest available ship: Raiding Hemiolias with Greek Archers to make up the bulk of your navy. These ships are the most cost efficient, and can ram infantry transports to death.

Your general’s ship isn’t all too important, although for this play through I used the Syracusan Marines.

Additionally, make sure to have a Supply Ship with each navy as they will allow your navies and armies to stay in enemy territory longer and resupply at the same time. 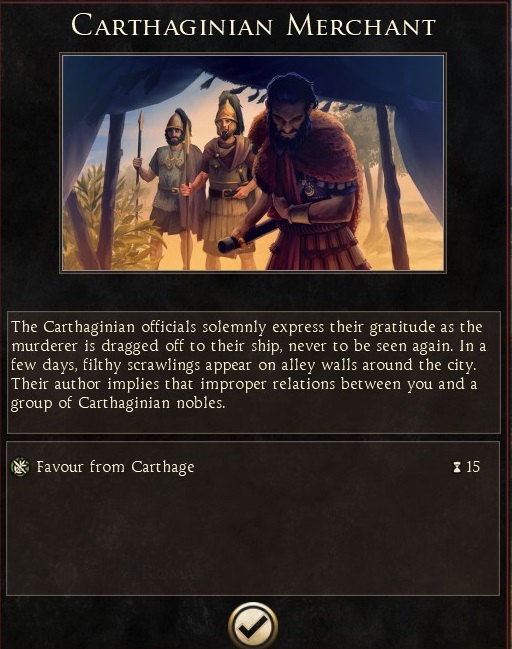 There are two types of events that will effect you and they center around Carthage and Rome.

Sicily Specific Events
Events having to do with territory in Sicily will trigger if either faction, including you, conquers anything. They effect diplomacy. For your own safety, do not take any territory in Sicily or both Carthage and Rome will attack you. It is better to fight one at a time.

If Rome takes a territory in Sicily, it will damage Rome’s diplomacy with Carthage, making it easier for you to secure friendship with Carthage if you are fighting Rome at the time.

Carthage Diplomacy Events
You will frequently get events centered around gaining gold or diplomacy with Carthage. Early on you should focus on diplomacy, but later when Rome is dealt with you can reap the gold benefits.

Rome in Jeopardy Events
If you push into Italia and are advancing towards Rome an event will fire off that says something along the lines of Rome continuing to pump out legions until the city of Rome is taken. This event will only fire off a few times, causing you to have a bit of a tug-of-war of territory until Rome loses its massed armies.

At a certain point, you will be able to dispatch Roman legions faster than they can push them up to the front. This will be done with a combination of one 20/20 army and your aforementioned 8/20 navy.

Beginning research should be focused in Construction and Management in order to defend Syracuse and keep your income positive. Once your income is secured and you’re making 2,000+ then moving into Tactics will allow you to go head-to-head with any army due to the increased unit skills at the cost of upkeep. Upkeep will also be offset by the skill of both your General and Administrator.

Liberation is not as useful as it sounds. Often the armies that Italian city states get are run-of-the-mill fodder. While they may seem useful to stall Rome, Rome can march through them taking minimal losses due to the disparity in unit quality.

Instead of Liberating, I advise you to Loot as much as possible if you can’t hold a territory but currently have an advantage. Simply Loot the province, destroy the buildings, allow slums to be made, and vacate your army back to Syracuse or to the sea by the safety of your navy.

Following this guide, you should find yourself in the pictured situation. Now, with a huge income, plenty of territory, and powerful armies with good traditions you have plenty of options going forward from fighting Carthage, to pushing north into Barbarians, or sailing half way around the world to fight some unknown enemy and establish colonies. 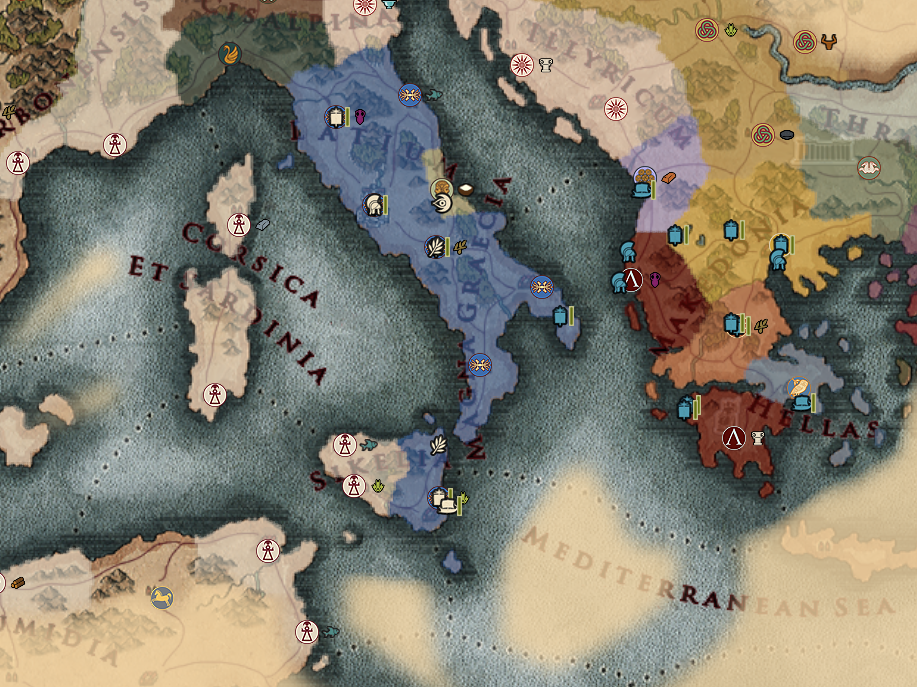