This guide goes into detail on my Infernal faction, which is available on the workshop with a dark red backed flame icon. An accompanying campaign is planned. 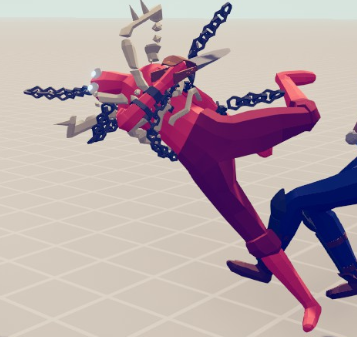 The Tortured Soul is the Infernal faction’s lackey, its basic unit, with a low cost of 100. The Tortured Soul has the ghostly eyes of retail workers during December, dressed in a bone harness, chains, and tatters.
The Tortured Soul has the notable deficiency of dying if you breath on it too hard. However, it has the Katar weapon, which attacks with a leaping strike that deals good damage, and the Stiffy Fear.
The Tortured Soul is a great unit to take on Squires, Clubbers, anything with a cost around 100. The Stiffy Fear prevents enemy units from depleting their low HP while the Katar strikes deal enough damage to kill them quickly. However, they are weak to strong units such as the Knight, which will resist their fear and cut them down, and ranged units, which will give them free piercings from a distance that makes them unable to fight back or inflict fear.
Infernal Amalgamation 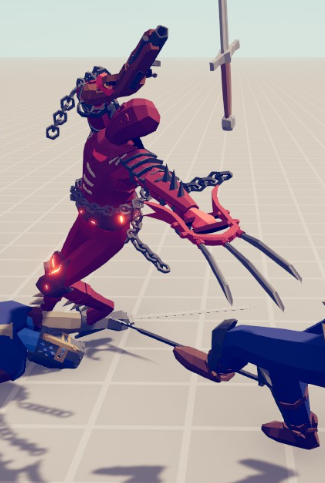 The Infernal Amalgamation is the Tortured Soul’s even more unfortunate cousin, having been experimented on and warped into its current form. A sack is stitched over its head, and it is dressed in tatters and chains, with bands of molten lava and rock in some places. One hand carries a small harpoon gun (demons are smarter than pirates) and the other has sharp claws affixed to it.
The Infernal Amalgamation has the constitution of the Tortured Soul, and no fear effect with it. Its harpoon will hit a target and reel them in, in a position they cannot fight back from, and it will then hit them with its powerful but slow claw.
The Amalgamation’s attack method leaves it very well suited to dealing with weak melee units and ranged units. If their harpoon hits, any ranged unit is doomed, as they cannot survive its powerful claw. Melee units are often thrown into disarray when hit, which gives the Amalgamation the advantage. However, if they miss, they are weak to enemy ranged units and melee units, being extremely vulnerable due to their slow and single claw and lack of ranged protection.
Hellish Guardian 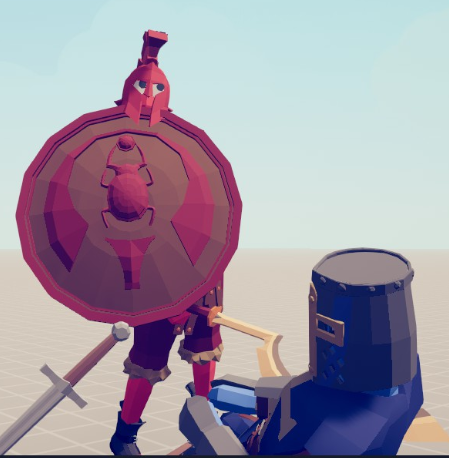 The Hellish Guardian is the Infernal faction’s shield unit, costing 350 to place. It wears ancient armour , but demonic influence has twisted parts of it into glowing, jagged rocks. It also carries a large round shield and a khopesh.
The Hellish Guardian is one of the few Infernal faction units with enough HP to survive a few swords swung at it, having decently high health. It has the Foolish Jump ability, sending it violently into the midst of battle to swing its weapons, which have good damage output.
The Hellish Guardian is a pretty good unit. Its DPS in melee can deal with lower cost melee units easily, and its shield protects it from attack. However, it is slightly subpar at protecting its allies for one reason – its jump attack. Its leaping into battle leaves it lying on the ground, and the probably squishy allies behind it are now weak to any fast enough melee units and ranged attack. As a shield unit, it is a bit below average, but in melee combat, it can deal with many other melee units.
Fallen Angel 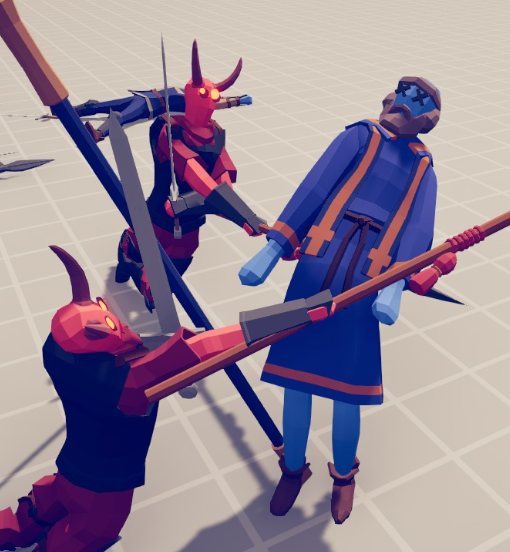 The Fallen Angel is an infernal unit that possibly is too epic sounding and costs 400. The Fallen Angel wears basic clothing and Fantasy Good armour that has been blackened and defiled, with glowing red eyes and a pair of horns. It carries a spear in one hand and a sword in the other.
The Fallen Angel, like most other Infernal units, has low health, but high damage output. It also notably has no abilities but a ridiculously high movement speed, allowing it to rush up to enemies. It primarily uses its spear, which has superior range and good damage, though the sword it carries is also used in close melee combat.
The Fallen Angel’s somewhat low health and lack of dodge moves would at first make it a subpar unit, considering how it has nothing to prevent counterattack. However, its pure damage output and movement speed can offset enemy melee units, dashing into their personal space to give them free body piercings. A group of Fallen Angels can overwhelm units such as Knights, though the sweeping zweihandier of the King will take one down in a singe hit. They are also weak to ranged units, but with allies as distractions they can quickly move up and take them down.
Infernal Mercenary 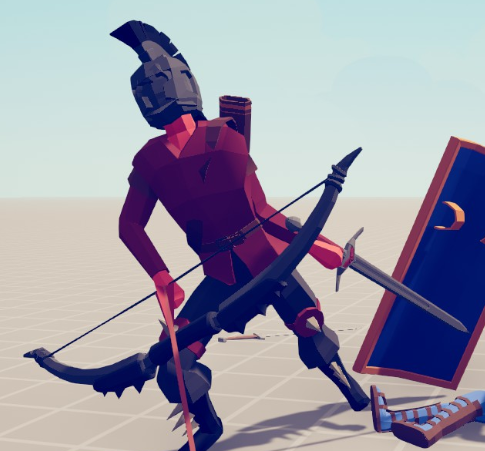 The Infernal Mercenary is the fifth unit in the Infernal faction and costs 500. It wears a helmet that completely covers the face for privacy protection and some basic clothing with spiked footwear. It carries in one hand a spiked black bow and in the other a sword.
The Infernal Mercenary has decent health, on par with a Squire or Samurai. Its bow is used like any other, as a ranged weapon, and the sword is for when melee units get close. It additionally has the Backwards Dodge ability. Both the sword and bow deal good damage.
The Infernal Mercenary is an expensive but strong ranged unit. At range, it is essentially an Archer with higher health, but in melee it is a strong unit on par with the Monk, capable of dodging melee attacks. Though its single sword is slower than the attack rate of other melee units, it deals damage enough to one-hit a Squire. It however can be outnumbered by cheaper ranged units at range and its melee skill cannot compare with dedicated strong melee units such as the Knight.
Ice Demon 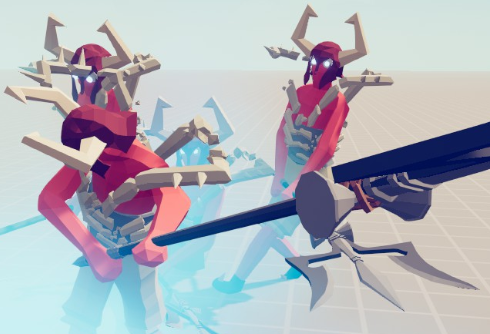 The Ice Demon is a polearm unit costing 610. It wears a bone harness with a helmet and body wraps, with ghostly eyes and a pair of horns. It carries a long trident, and constantly breathes out a cloud of chilling blue gas.
The Ice Demon has good health, between that of a Chieftain and a Knight. Its trident will perform a small leap and aggressively swing it at a target to attack, which can deal some good damage. Its Ice breath is not particularly dangerous, taking a while to freeze even a Squire, but in a prolonged melee many opponents can be frozen and it is difficult to attack the Ice Demon without getting a breath of its breath.
The Ice Demon works well in small groups, however these are expensive, so it’s better to use more spammable units such as the Tortured Soul with it. It has good damage output and survivability, though in melee it can be a little clumsy and miss its attacks. Overrall, it is a strong melee unit with decent crowd control.
Fire Demon 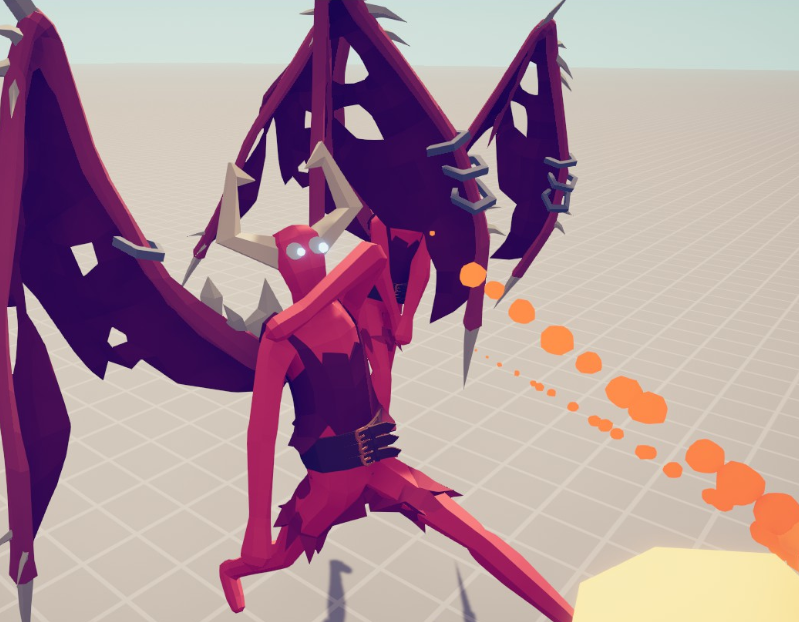 The Ice Demon’s more expensive and more hotheaded cousin, that costs 660. The Fire Demon wears tattered clothing, with two large wings and horns. It conjures fire from both of its hands, and hovers above the ground.
The Fire Demon is a strong crowd control, ranged unit. It has low health, but the fact that it hovers above ground can make it difficult for melee units to hit. It can conjure a Fire Storm, dealing damage and setting fire to units in an area. It will also throw fireballs at enemies within range, but will not move within range. The fireballs have good damage, recharge quickly, and can set targets on fire.
The Fire Demon is expensive, but a strong investment when used correctly. It can take on 15 squires with a few Tortured Souls with it, but its single target damage can take down a King with about 2 or 3 of them. The fire it spreads with its attacks will quickly kill weaker units, and its Fire Storm will punish slow or unmoving units. However, it is weak to quickly charging units that will outrun its Fire Storm, and it has lower range than most ranged units.
Infernal Knight 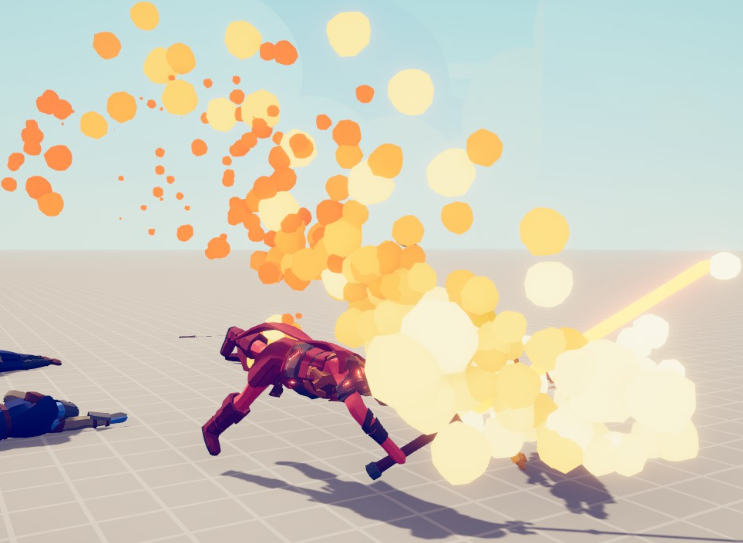 The Knight’s more belligerent version, with a cost of 690, which is expensive but nice. The Infernal Knight wears a full helmet and armour, with a few glowing and rocky parts. It carries a big flaming sword.
The Infernal Knight has high HP, about the same as its non-infernal counterpart. Its flaming sword deals a lot of damage, and inflicts fire that will finish off any survivors. It can also perform a spinning dash slash that can often kill a target before it reacts.
The Infernal Knight is a strong unit with the capability to take down several other melee units easily. Its large, wide sword swings can hit multiple units and the fire it causes can burn through more than one unit as well. The Infernal Knight deals a lot of damage, but is not invincible, most notably the fact that unlike the Knight, it has no shield, which makes it much easier for both ranged and melee attackers to hit it.
Archdemon 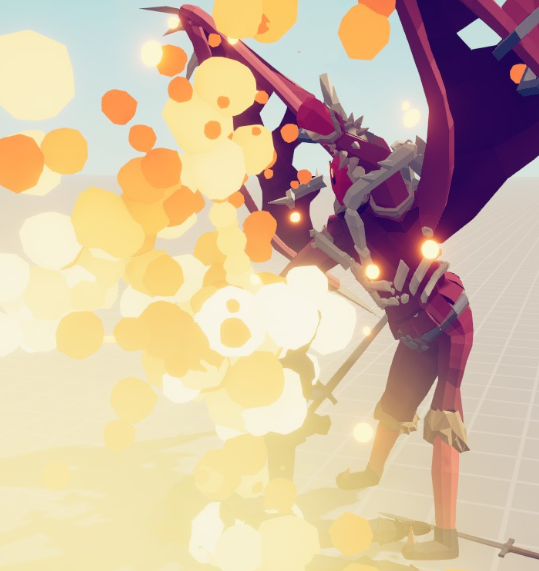 The Archdemon is the boss unit for the Infernal faction, costing 1920 and standing much taller than a regular Wobbler. It has glowing red eyes, with some clothing underneath a bone harness and horns, with wings that it does not use. The Archdemon carries a large flaming sword in one hand and throws fire from the other.
The Archdemon is an extremely capable fighter. It has high HP, capable of surviving several swings of a King’s sword, and has extremely high damage output. It can conjure a Fire Storm and unleash blast of fire to units that get too close, and its flaming sword deals large damage.
The Archdemon is extremely powerful, capable of withstanding unknown amounts of weak units and taking on other boss units such as the King. It will often summon a Fire Storm on top of any foes strong enough that are close to it, causing them to take immense damage. Its flaming sword will outright kill most units and its fire throws can damage and kill units before they get close. The only weakness the Archdemon has is that it has HP a bit lower than other boss units, and that much like the Fire Demon, will not get in range to attack ranged units with its fire throws.
By Rednax910