Achievement hunting with your virtual fish. As of 11/24/2021, this game’s achievements are now all working perfectly! (A big thank you to the devs for fixing that!)

Follow this guide and you’ll have netted another perfect game in your library in a week (or far less time–read further for more info on the great time saver)!

Welcome and a Warning

As of this writing (11/24-25/2021) the developers have made it possible to earn all 30 of the achievements in their game. Every achievement is unlockable.

It should go without saying but I have to say it anyway:
SPOILER WARNING
This guide is FULL of spoilers, especially as we understand that the developers purposefully hid achievements and their descriptions until after they had been unlocked.

But for me, the titles and pictures used for the achievements were sometimes vague and unhelpful. So if you are frustrated, as I was, I hope this will help you out a bit.

(If you follow this guide in order, you can 100% this game in a week…or 5-6 hours if you don’t want to wait–more on that later)

Teach a man to fish

Go ahead and do all secondary requirements for every contract–it will help later, I promise!

Thrown in the deep end!

This is where the game starts to throw its little curve balls. They are not too hard to figure out but can be a little vague. In this case you are given a child’s crayon drawing for the specifics.

Earning ALL of the Points

100% of Points for x-number of Contracts

Each contracts offers 1,000 points as the reward for completion of both primary and secondary requirements. Make sure you complete every requirement in each campaign mission and you’ll earn the following achievements in short order:

Unlocking ALL the Items

As you complete each contract in the campaign you’ll earn points as your reward. These points go towards unlocking additional items in the store that you will need as you progress. These unlocks are automatic and occur without user input.

Making sure that you are completing both primary and secondary requirements will make these unlocks more frequent.

Complete the contracts, earn the points, unlock the items and you’ll soon unlock these achievements:

Completing ALL the Contracts

As you complete each contract of the campaign (both primary and secondary requirements–see I told you it would help) you’ll unlock these achievements in short order:

(Disclaimer: You’ll probably unlock these in the campaign, when I played through it some of these were broken so I got them in freeplay–either way, they are simple to get 🙂 )
Fresh as a Mountain Stream

Does your tank have a filter? No? It should, your fish will appreciate it!
Go to your store and Install one (this might unlock it) 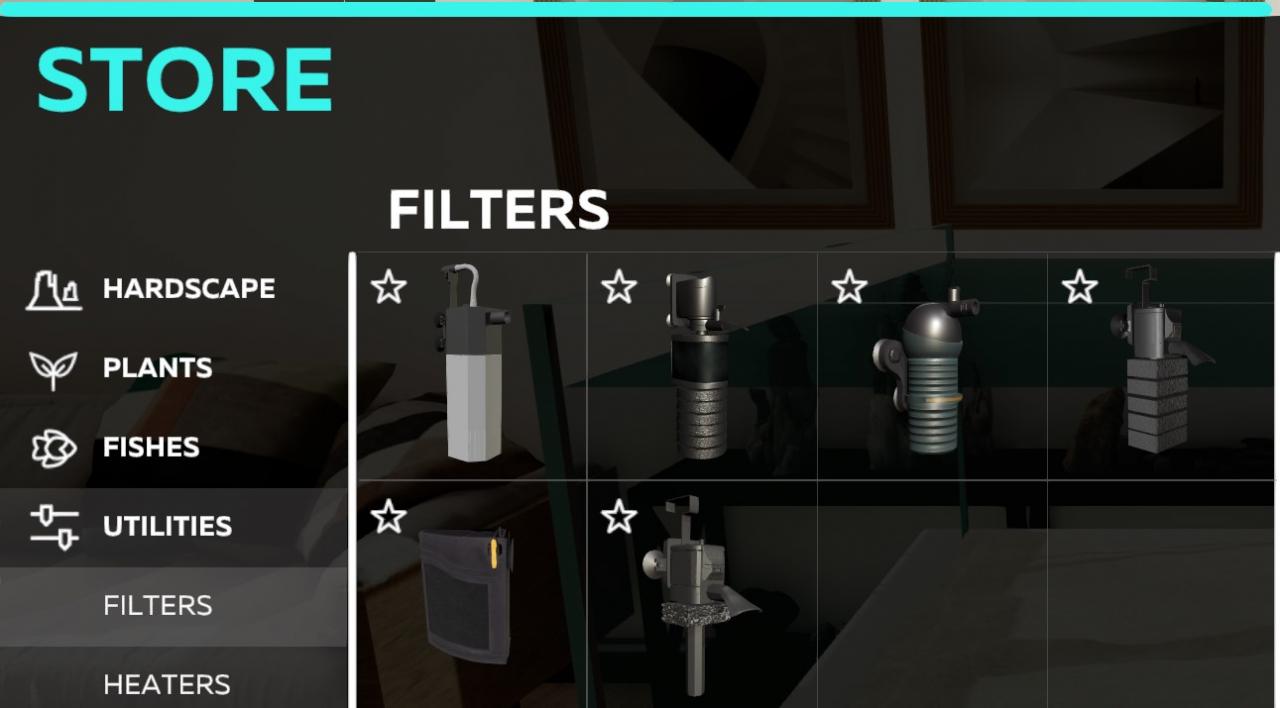 If it doesn’t unlock, go back into the store and select a completely different filter to use for that tank (it will automatically replace the one you have) and you’ll unlock:

Cleaner than a Cleaner Fish

Over time, your tank will get dirty as it does you’ll see the percentage of dirtiness shown in the top left of your screen. Once you see the cleaning tool button next to the pH level you can click it to access the tool. 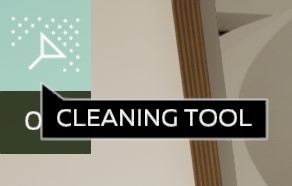 As time goes by, the percentage goes up (I waited until mine was at 100% but I doubt it matters) you can click it and will be given some algae scrubbers. Click on the glass, and scrub it clean to unlock:

Your fish need food!
Select the largest tank you can and stock it FULL of small fish. Set the tank up to the appropriate temperature/pH and make sure there is a filter. Get ready to stuff your fish full of food. Just click that feed button 300 times and you’ll unlock:

This is more of a lack of tank maintenance achievement. You remember that Cleaning Tool? Skip it. Let the tank get 100% dirty and you’ll unlock:

Select My Aquarium and choose Casual mode. Choose any size for your tank and give it a name, and then click the green “Create” button to unlock:

Tip of the Iceberg

Got it? Great!
Now go back to the menu, select My aquarium and delete this casual tank using the trash can button. We won’t be needing it again.

(Disclaimer: Some of these are likely attainable in the Campaign. However, as some achievements were broken during my run through the campaign, I earned them in My Aquarium after the devs fixed it. We NEED to use Realistic Mode for these achievements as most of them require that the tank, fish, and/or plants be able to change states.)
Come Hell or High Water/Big Fish in a Small Pond

FIRST
Notice that there are nine save slots in My Aquarium. We’re about to use them all–but let’s be efficient with our time.

Create an aquarium in each slot using the first aquarium on the left and make it big. Give it a name and click “Create.” 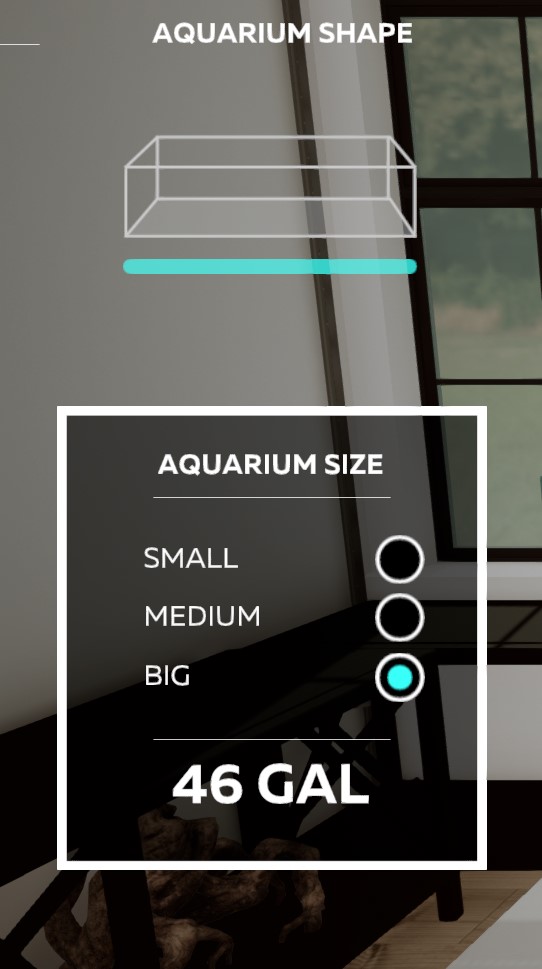 Doing this will unlock:

Repeat that process for the remaining eight save slots and you’ll unlock:

Now we’re going to use at least the first three aquariums:

Select your first aquarium and open it up. Find a small fish and just start dropping them in until the tank can’t hold any more and you receive the “Too many objects” message. I used the

but I don’t think it matters as long as it is small.

As you do so you’ll unlock:

Don’t stop even though you get the achievement. You’ll need all of these fish later.

In that first aquarium, go ahead and start filling it up with plants at the bottom–I never found a limit on plants, I just made it look like a nice grassy yard at the bottom of my tank. I used the

because it was a skinny plant with a very skinny base. Cover the bottom of the tank with them.

When you’ve completed that, do it again for the second and third tanks in My Aquarium. Once you do, you should have more than enough fish and you’ll have WAY more plants then you need for the next part.

Now, the easy but tedious part: You have to wait for them to die. Everything is kept track of so you can just continue on with this guide and let nature take its course.Check on them over the course of the next few days and eventually you’ll notice the fish and plants have died from some malady (lack of food, temperature, pH level, or no filter) either way you will have unlocked

(Time-saving tip (I found this out while testing these achievements for this guide) If you don’t want to wait, just go into your system’s time/date settings and manually move your PC’s time forward 8 days and reload your Aquariums. The fish and plants will be dead and you’ll get these out of the way. YMMV and I take NO responsibility if you break your game/PC doing this. If you are at all unsure about changing your PC settings just wait a day and don’t feed your fish, they will die all on their own–I promise.)

OK so we’ve filled up three aquariums full of fish and plants…head down to the fourth one.
(This is the other reason we picked the aquarium we did). We need to fill up our tanks with 300 rocks. This is undoubtedly cumulative with the campaign so if you placed a lot of rocks this might pop quickly. I had played around with some tanks before trying this out as I didn’t know what unlocked it)
Head into the store and go to the Harscape/Rock section. 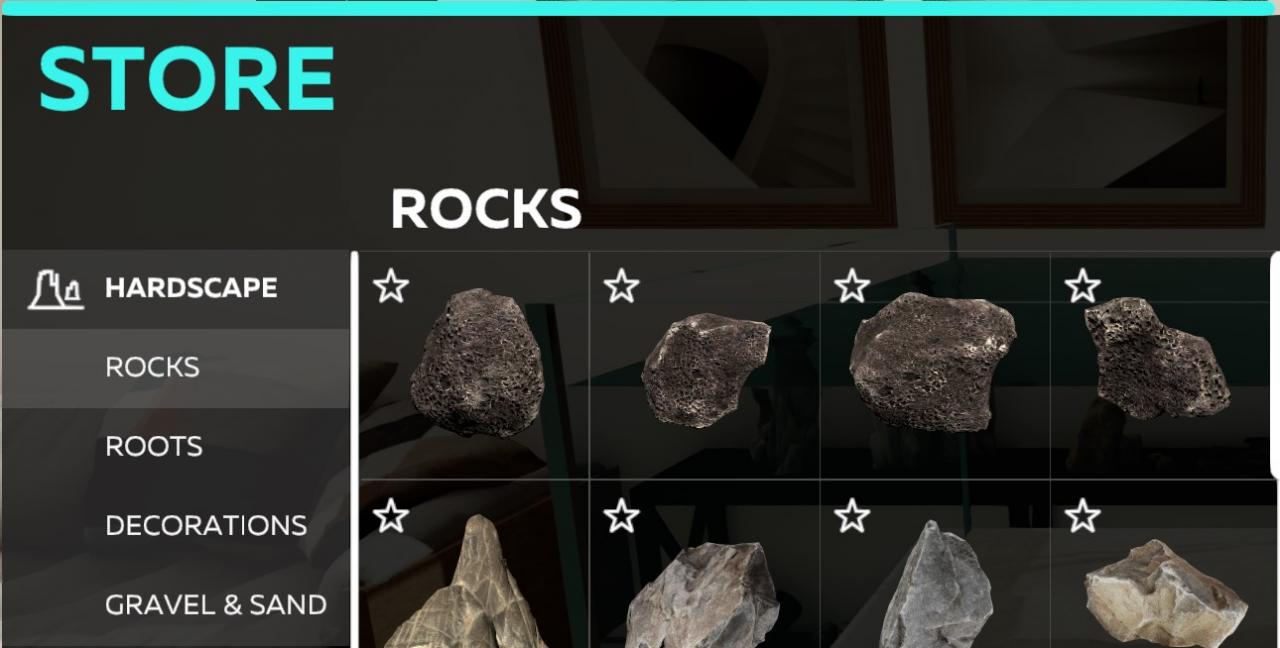 I started at the bottom because the larger rocks were down there. Working your way back up the list select one rock at a time, move it to the floor of the aquarium, make the rocks as small as possible, and start packing them in like you were playing Tetris. Eventually you will unlock:

(If it doesn’t unlock with your fourth tank–it likely will if you’ve done the campaign–just keep going with the tanks you made previously. I imagine you could use the same rock all the time, but I wanted to have a little fun so I used one of each as I filled up the tank.)

Have you noticed that everything costs money in this game? Well you need to spend $10,000 to unlock this one!

If you’ve done the campaign and followed this guide in order, you almost certainly have unlocked this by now. If not, use one of your remaining tanks and start putting in the most expensive fish/decor (make them smaller and pack them in like the rocks) in it and you’ll quickly unlock:

Fish Out of Water

Remember all those fish you killed, plants you installed, rocks you placed, and all so carefully too? Well now you’re going to remove a whole bunch of them. Just use the remove tool (found near the top-center of your screen) and take out things until you unlock:

Keep Your Head Above Water Achievement

Head into My Aquarium–Realistic Mode

IMPORTANT:
The game keeps track of your fish even when the game isn’t running and your fish will die without your intervention. More accurately, it checks your PC’s date/time from its last save state with the current date/time of your PC when you load an aquarium. So when you load in, if you haven’t done your job, your fish will be floating at the top of the tank.

Now here comes the trick (if you didn’t see it earlier–I found this out while testing these achievements for this guide).

Go ahead and set up your tank correctly and then back out of the game through the menus so it saves. Head over to your time/date settings and manually change your clock to eight days ahead.

When I did this and loaded back into my tank, this achievement unlocked as the game seemed to see they were alive for just long enough before they “died.” If for some reason it doesn’t work, just move the clock forward one day, load back in and feed your fish and save. Then just step your clock forward for the eight days (one day at a time) and feed your fish each time and this will pop on day seven or eight depending on if you change the time as well as the date.

(I take NO responsibility if you somehow break your game/PC doing this. If for any reason you are unable or unsure of how to do this just play the game and spend 3 minutes a day loading in and feeding your pixel fish 🙂 — or you know, just feed these fish and enjoy designing other aquariums and playing the game as intended…it is fun and you paid for it after all. )

All is Fish that Comes to the Net

Once you have completed all of the other achievements you will unlock: