Character builds and locations of each spear in the game.

The top tier spear uses 2 AP to attack, meaning if you kill a character on your first turn then you could be making as many as 7 melee attacks on your turn, each of them with the ability to hit multiple targets.

Also, while shields were a mandatory usage for melee in the previous game, in Trudograd you are unable to use a shield with Power Armor. Since spears are 2-handed and don’t work with shields anyway, that provides a natural synergy with Power Armor.

The stats below are examples using an imported character. 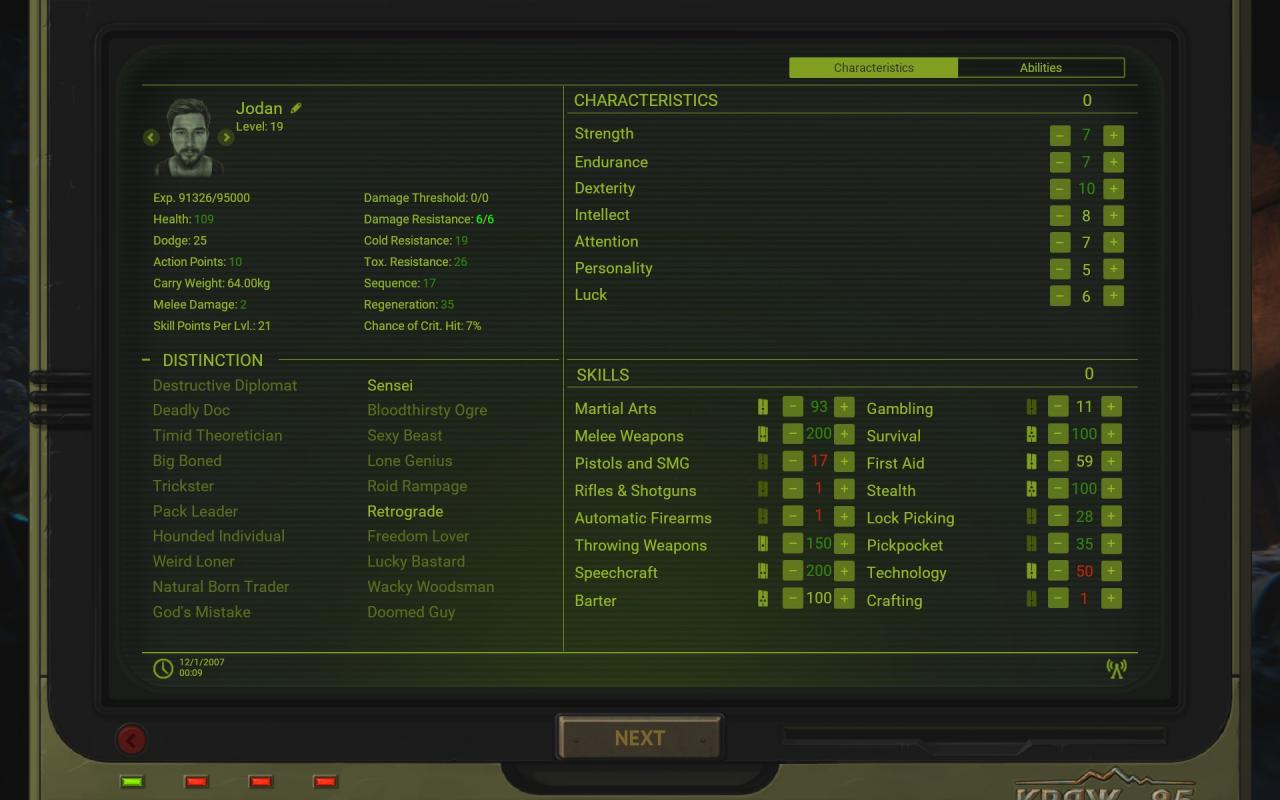 Strength 7. You will need Strength 10 to use the final spear. Power Armor will give you +2 Str, and you can use either one of the Serums or coffee to further your Strength later on.

Endurance 7. You will want to be tanky enough to survive some hits and Endurance is probably the easiest stat to get temporary boosts with consumables.

Dexterity 10. For 10 Action Points which you need for Fast Reaction. You could possibly drop Dex down to 8 and use Inner Reserve for the 10th Action Point, but I’d much rather have 11 AP since a lot of your actions with the spear build will be sent getting into place.

Attention 7. I’m partial to 7 Attention myself. That is the minimum needed to see buried mines and it gives you a decent 8 Attention for dialogues with the Speechcraft bonus.

Personality 5. You could drop this further if you wanted depending on your gender and/or dependency on consumables.

Luck 6. Luck not only effects your crit chance but also determines if you are hitting more on the low end of your weapon or the high end. If we have a weapon that does 15-50 damage, then we want as many opportunities as possible to roll the higher number. This is especially true since spears do not have an aim attack like other weapons. We’ll need 8 Luck to get one of the spears, but that can be achieved even at 1 Luck.

Non-Imported Character. If you are working with a fresh character and do not have as many stats available then your best best is to drop down Personality or Luck.

Sensei – Should be a given, this is always your top choice for spears since you will not be using any firearms.

Retrograde – I prefer this one over all the others because of the bonuses it gives, but it does rely on have another party member act as crafter.

Natural Born Trader – Another good choice if you are not interested in tanking your personal crafting ability.

God’s Mistake – A decent contender if you are playing a non-imported character and have a Luck of 1.

Martial Arts
Experienced Butcher, Dodge Master, Precision Stab, Fast Reaction. Leave Street Fighter for later once you have 10 Strength and even then only for builds with positive Luck. Stay away from Blade Master unless you find yourself throwing spears a lot and want to drop it down from 4 AP to 3.

Throwing Weapons
As far as I can tell, there isn’t a single ability in the Throwing Weapons that applies to spears, so we will not be picking anything.

Spend remaining points how you see fit, but going up the Crafting tree is recommended even if you have a Crafting score of 1.

This will be our early game spear. You can get it almost immediately but it does require some run around and at least 2k Rubles. You will need the following items to get the Trident. 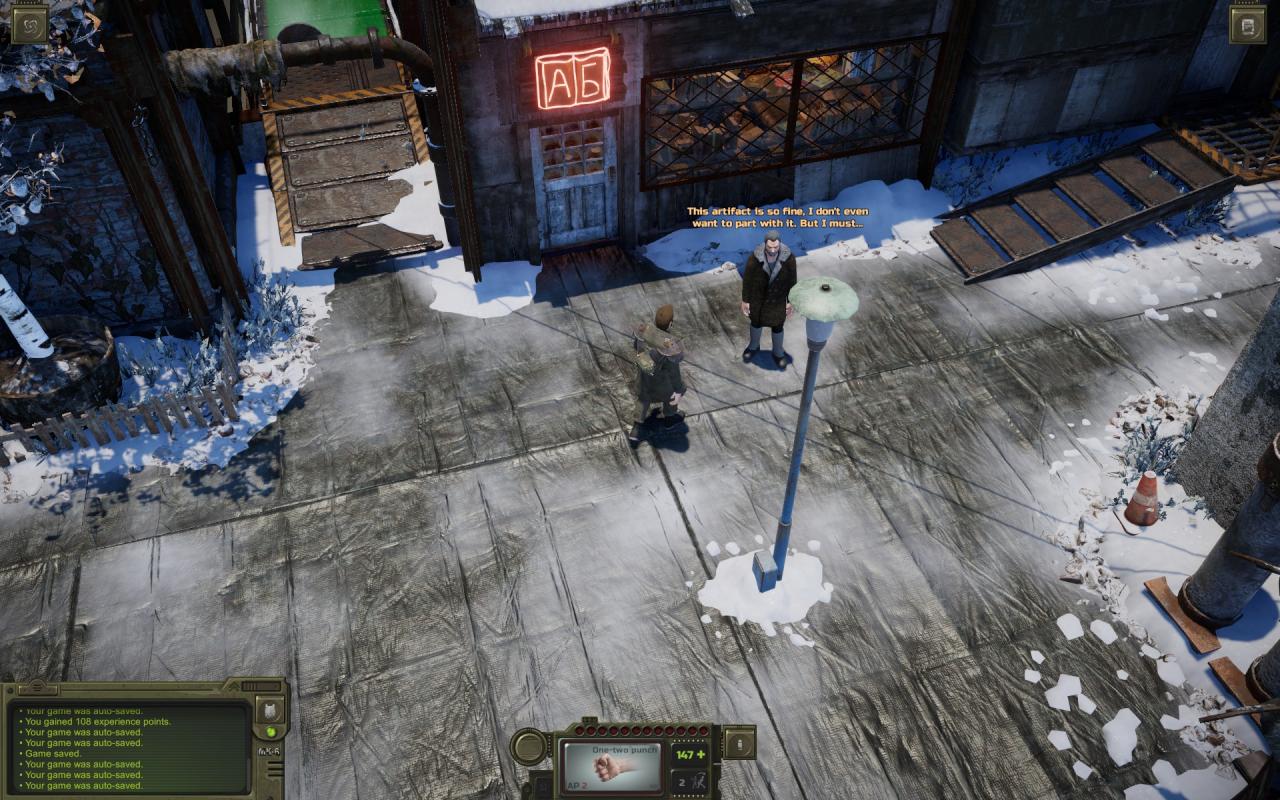 First make your way to Second Tier (adjacent to this Police Station). We will need two items from here. One is the Old Diary from the book store and the second is the Bone Flute artifact being sold by a man just outside the book store.

The artifact costs 1k but can be negotiated down for less. Once you have the Old Diary from the book store, use it in your inventory to read it and it should add a journal entry. The next step is to go to the island.

Head to the docks and speak to Captain Sinbadov to go to the island. He will charge you 300 Ruples for the trip. 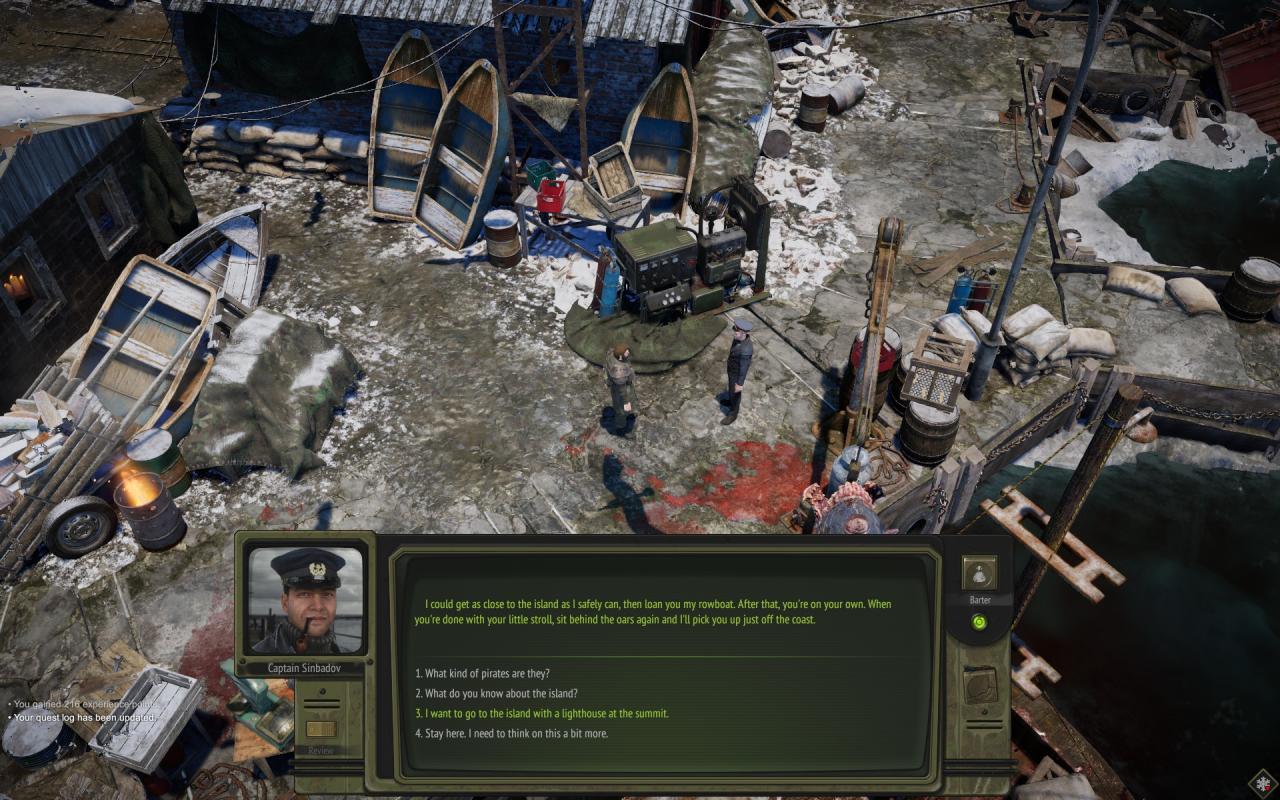 Once on the island, you should see a spiral of rocks that should look familiar if you played the first game. Your first step is to walk into the center of the spiral of rocks. Once there, open up your inventory and use consuambles to get up to 8 Luck and then use the Toadstool which should give you a Hallucinating status effect. Once both of those are done, use the Bone Flute and it should trigger an event. 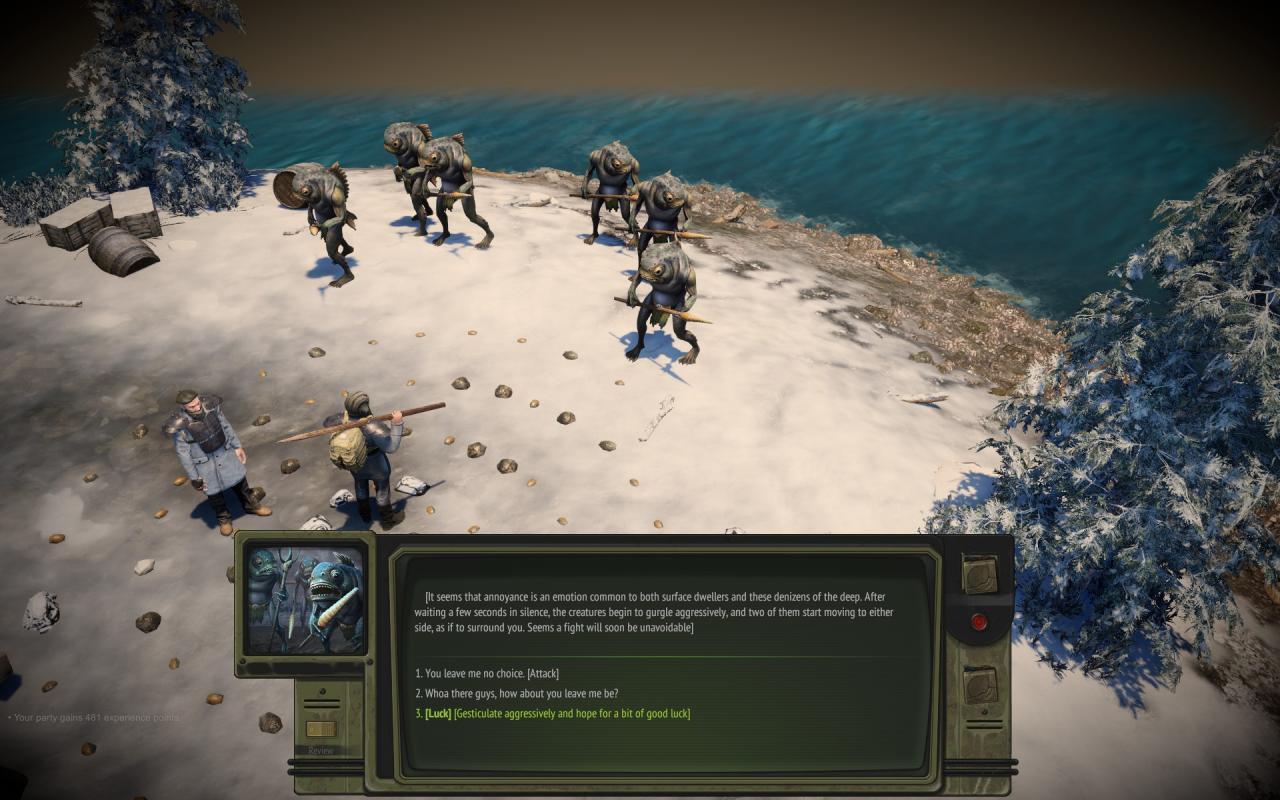 Speak with the fish-folk until you see the Luck event and assuming you have a luck score of 8, you should get the Spear and an achievement. 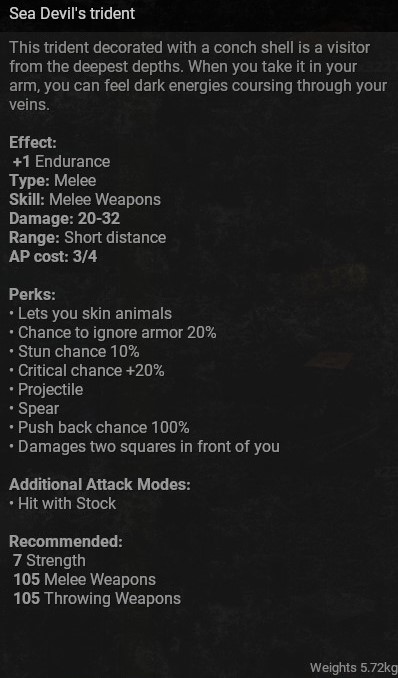 This will be our secondary spear used for throwing. They are easily farmable but the fight to get them isn’t easy so is more of a mid game weapon. 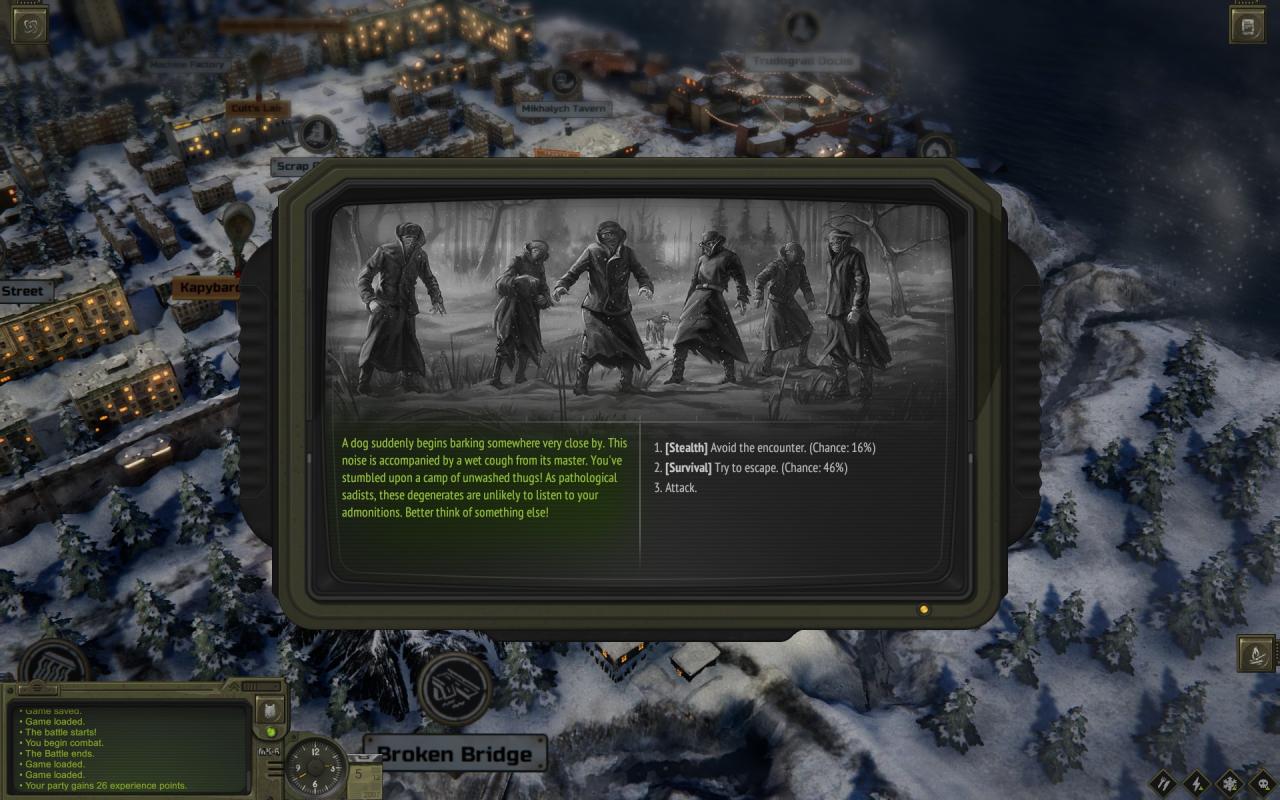 Walk around outside of the city and you should be able to trigger an event with Mutants. Each of them is using a Bone Spear so that will give you 3 spears per fight.

The end game spear. So broken that I’m shocked it hasn’t been nerfed yet. A weapon that can hit multiple targets with 2 AP and can absolutely wreck in combat. You won’t get it until later in the game but make sure you purchase both spear mods from vendors that well weapon mods. 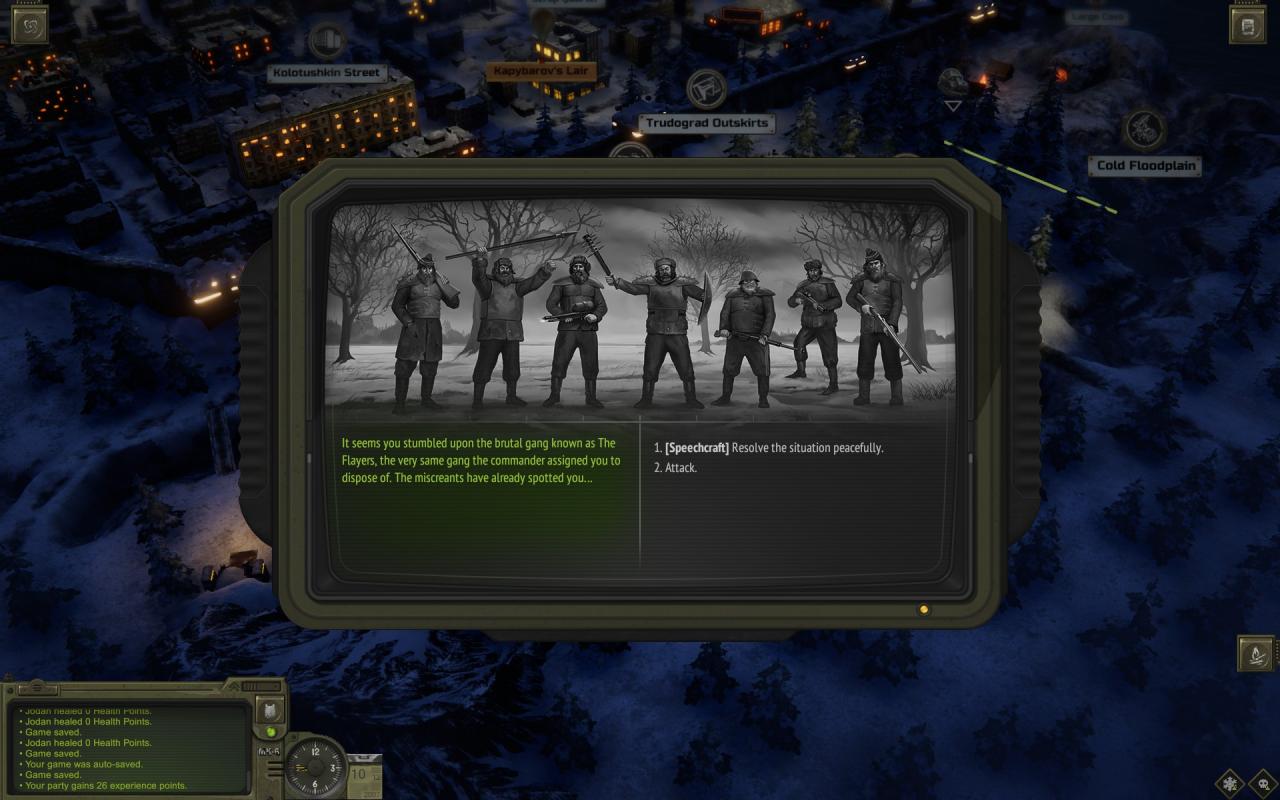 To get the Heavy Metal Spear, you will need to fight the group known as The Flayers. This is done by first unlocking access to Seventh Heaven, and then following the questline to ensure the police chiefs loyalty. Once you get the quest from the police chief (Revolutionary path unknown but probably similar) then just walk outside of town until you fight them.

And yah, it does good work. 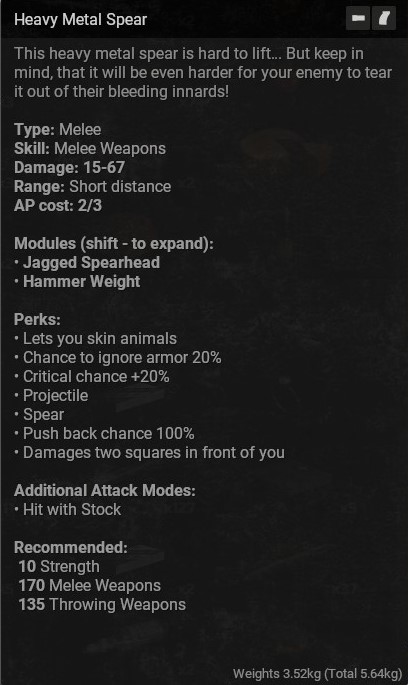 The remaining spears are Pitchfork, Stake, and Spear, but they either do minimal damage or have an increased AP cost to use so is generally not worth using them. If you are still interested in them, 3 Stakes can be found in the Cult’s Lair zone that opens up from the memorial NPC at the Police Station and regular Spears can be found when fighting Northerners or the Honest People Society map encounter.

Spears can reach two squares away, but not two diagonal squares away. You also push away any enemy that is within 1 square away. Range guide image is below. 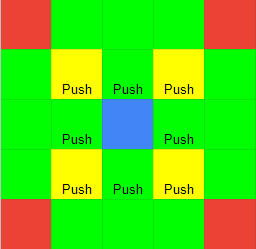 Since you cannot attack at a distance of two diagonals away, and since the spear pushes adjacent target away, you will want to position yourself to avoid any sort of diagonal targeting when making attacks. Stick to the green squares as best as you can.

Your goal when using spears is to get a kill to trigger Fast Reaction, which gives you a second turn of half AP. Spear throws count as well, so if a low health enemy is too far to reach and melee, don’t be shy about throwing one of your Bone Spears at it.

On your Fast Reaction turn, you should have 5 AP to spend. Kills don’t matter for this turn (though death enemies deal no damage!), so I usually spend my move and position myself to hit two targets if I can. That changes a bit once you get the Heavy Iron Spear, in which case you will spend your 5 AP to make any two attacks that you can.