This text contains information on how to get all the achievements for the Steam version of Game Dev Story. Of course, the achievements are not as impressive as in the iOS version, but I still have a lot to tell you. Let’s go!

Proof of developing the first game.

The very first and easiest achievement, for which it is enough to release your first game. This can be done from the first second, just click “Develop” -> “New Game” and follow the further instructions. There are no requirements for the chosen platform or the quality of the game.

Proof that 1 million copies were sold.

Develop a game that will have sales in excess of 1 million copies. The most optimal console for this achievement is the Game Kid, which is being released at the end of Year 3. There are initially 2.5 million consoles on the market, so releasing a game with above average scores (7-8 out of 10) is enough to gain a million copies. This usually just happens during the game near the end of the second office or at the beginning of the third office (Around Y5-Y6).

Proof of mastering all occupations.

For this achievement you need to upgrade all professions of at least one employee to level 5.
Game Dev Story has a mechanic of professions that are initially assigned to each employee, which can be increased in level and, most importantly, changed.
The level of the profession is increased by Research Data Points, which are accumulated for performing contracts and during the development of games. It is necessary not to spend these points on third-party activities (development point boosts or contract acceleration) and keep them until the second office.
Profession changes are done with a consumable item called the Career Change Manual, which can be purchased from the Salesman every 5th month of the year. I recommend that you buy 5 manuals in year 2 and year 3, as long as they are inexpensive.
When you get to the second office and collect ~400 Research Data Points, you need to hire George Marlin from Vocational School. In addition to his good characteristics, he has the advantage of already having two level 5 professions, which means that you need less Career Change Manuals to upgrade him completely. After that you can raise the level of his current profession (Director) to the maximum and use manuals to level up him as Writer and Designer.

Hint: you during leveling up you can perform “Reading” training for George Marlin when he is upgraded Writer. It doesn’t help to get achievement, but unlocks lots of game types!

At last, switch George to the level 1 Producer and you’ll get strong overstated person for midgame. 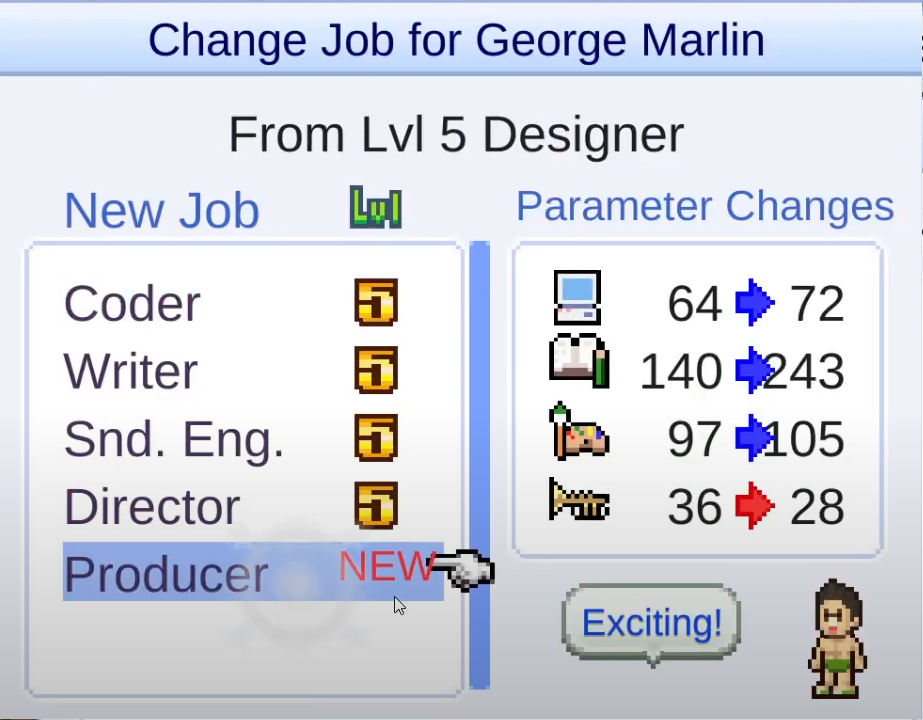 After that you can play as usual and collect ~500 Research Data Points. At this moment you’ll be able to get level 5 Producer, than level 5 Hardware Eng. and switch to the secret profession – hacker! After getting level 5 Hacker you’ll get an achievement.

This achievement requires winning the Grand Prize at the Global Game Awards. This is an award ceremony that takes place every year at the beginning of M12W3. The only prerequisite for opening is a transition to a second office, which usually occurs at the beginning of the fourth year.
At the beginning it is impossible to get the game of the year, because the studio is still too small, so the goal will be to get minor awards for graphics and sound. Receiving two of these awards (Runner Up doesn’t count!) will open up the possibility of moving to a third office, which means for us:
– 8 employees instead of 6
– The ability to hire hackers, the strongest employees in the game
– The ability to make sequels for Hall of Fame games (means the game is 8 out of 10 or better)
These improvements give us access to the opportunity to develop the game of the year. For me, the best way was to make enough money to hire all the hackers available at the Hollywood Agency (it is not necessary to take all at once, it can be done in 2-3 hires), level up 1 employee to the hacker (see
All good Job achievement for more details) and start making games for the most relevant console (Game Kid -> Super IES -> PlayStatus). The best way is to choose 2 amazing combos of genre+type, make a starting Hall of Fame game and then non-stop make sequels alternating between combos. The requirement for first GOTY is to have 150 of every game stat (Fun, Creativity, Graphics and Music), so make sure to use all the available boosters and try to get consistent stats. Game with 250 Fun and 130 Music is not GOTY =/
With the best of luck, you can get the award at the year 6-8, feel free to take your time. 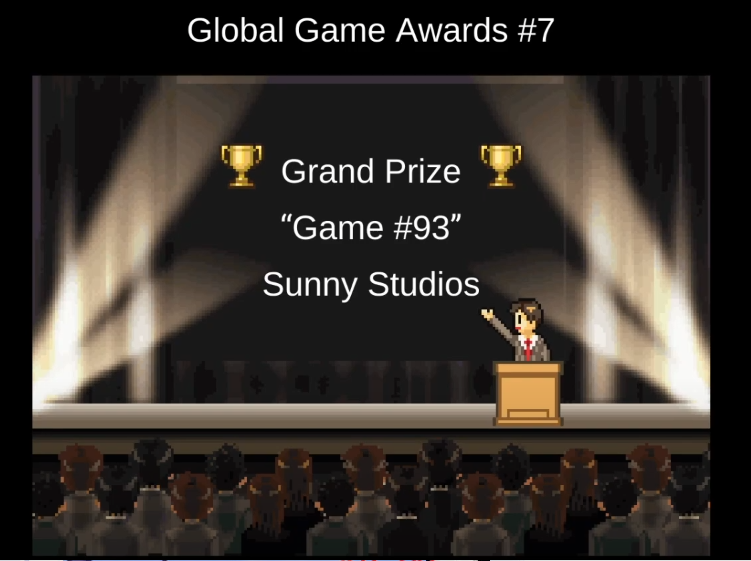 The company that Kairobot works!

Game Dev Story has several secret employees that are unlocked only when certain conditions are met. Among them, getting Kairobot is especially difficult. According to the Japanese wiki, there are following requirements:
– Appears after Y14M1
– You need a game that has at least 20 million copies sold
– Should have 5 award of every type*
*Probably an inaccuracy in translation, because I managed to hire Kairobot with 4 awards for graphics

Anyway, for that achievement you want to get ultimate game dev company. At start it could be a good idea to follow the path for the first Grand Prize (see the “Global Game Awards winner!” achievement section).
Then you want to start a pipeline of games to make sure you’ll have at least 4 games presented for the Game Awards and get all the trophies every year.
Make sure to spend all the Research data for following targets:
– Level up hackers (level 2 upgrade will make you think the game is making fun of you, but then their stats will skyrocket)
– Game boost event (with the best employee you’ll have to spend 6-20 Data Points to get 80% chance to success)
– Game boost items (less useful, but can be used to raise required stat to the 200)
In my experience, getting the game of the year the second time and beyond requires a bit more stats. 200 should definitely be enough, maybe even a little less would be fine.
The last aspect is sales. At start use Super IES or PlayStatus to get 2 GOTYs and 16 millions sales to unlock secret console named Jupiter 512, after that reaching 20 million is not a problem. Make sure to spend LOTS OF MONEY for advertising and visit all the Gamedexes you can. A little trick: M7 and M12 are “high sales” month so you want to start game development near the M4W2 and M9W2 to release the game at the best moment and get the highest first weeks sales

What a great game company

Proof of running a company for many years

Okay, previous achivements were tricky. After raising your game dev company from zero to the giant corporation all you need to do for this achievement is to play till the year 21. If you are bored with game, feel free to stop doing any development and skip all the events as there is no bankruptcy mechanic in this game.