This is the Official Isonzo Game Guide from the developers, describing everything you will ever need to know about the game. This is a must read if you are new to the game.

Welcome to the mountains and valleys of Isonzo, soldier! Isonzo has unique features that may differ from your previous FPS experiences, so make sure you use this guide to prepare yourself for battle!

Isonzo is set in the Italian Alps during the First World War (1914-1918). The Entente Powers were fighting the Central Powers, and on this front the Kingdom of Italy (Entente) were pitted against the Austro-Hungarian Empire (Central Powers) in the high mountains and valleys of the Italian Alps, which the Isonzo River (now known as the Soča River) runs through. Italian Commander Luigi Cadorna initially faced Austro-Hungarian commander Franz Conrad von Hötzendorf in what quickly turned into a stalemate in the mountains and plains of the Isonzo, and resulted in costly battles for minimal gains. 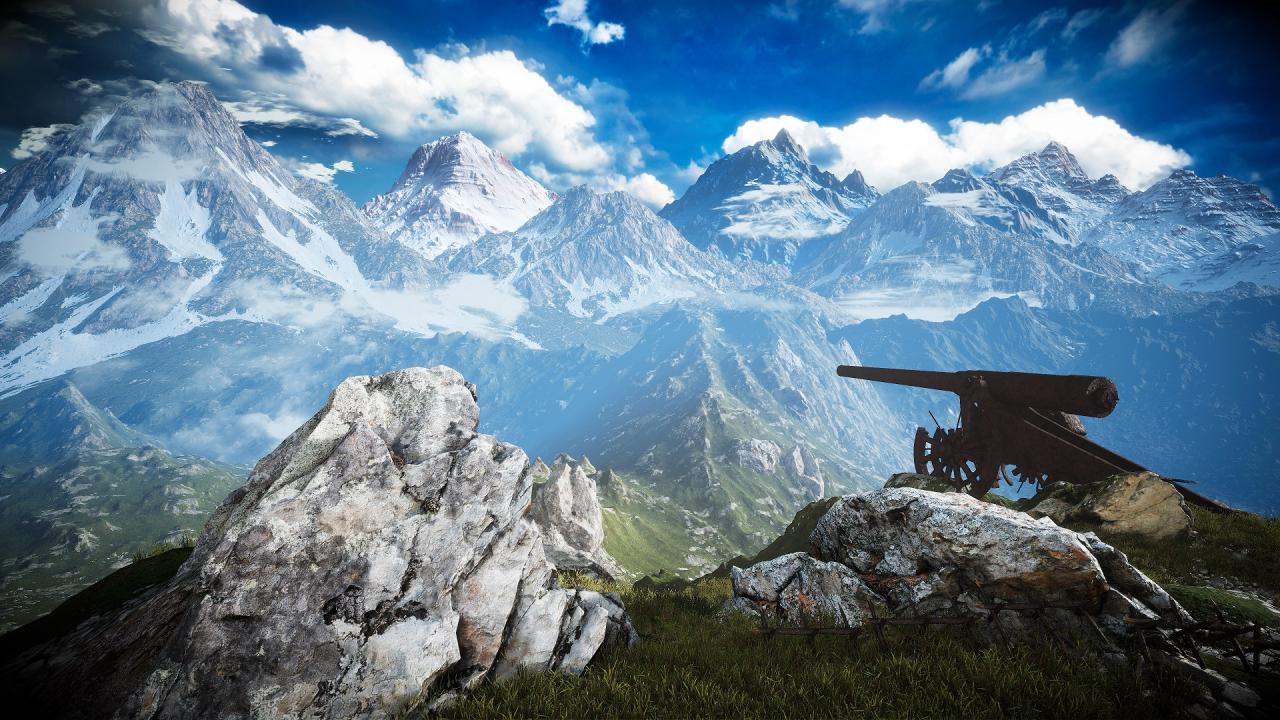 Isonzo brings with it a new game mode to the WW1 Game Series. Offensive is a new game mode focused on portraying the largely “Offensive” nature of the Italian Front, where battles would usually consist of one side pushing against the other trying to capture objectives for days, weeks and even months at a time. This means one team’s sole focus is to take objectives (by either blowing up important enemy materiel or capturing points), and the other team’s focus is defending those points and preventing the other team from moving onto the next sector. A system of barbed wire lines with dedicated wire cut points funnels attackers into certain corridors to assist with balance. A more detailed description of attacker and defender player roles can be seen in the “Roles” section of this guide.
A unique feature of Isonzo is that one map is not one Offensive, rather multiple maps make up an Offensive. The objective of the Attacking side is to push to the final sector, if at any point the Defenders are able to hold the Attackers till they run out of tickets, then the Defenders win the Offensive. Attackers must win the final map in an Offensive to win the Offensive, and they can carry over a portion of tickets from previous maps in the Offensive if they have tickets left over.

A main feature of Isonzo is being able to construct forward posts that allow your team to deploy closer to the front! Beware, these can be removed by the enemy which will limit your team’s ability to spawn close to the objective. 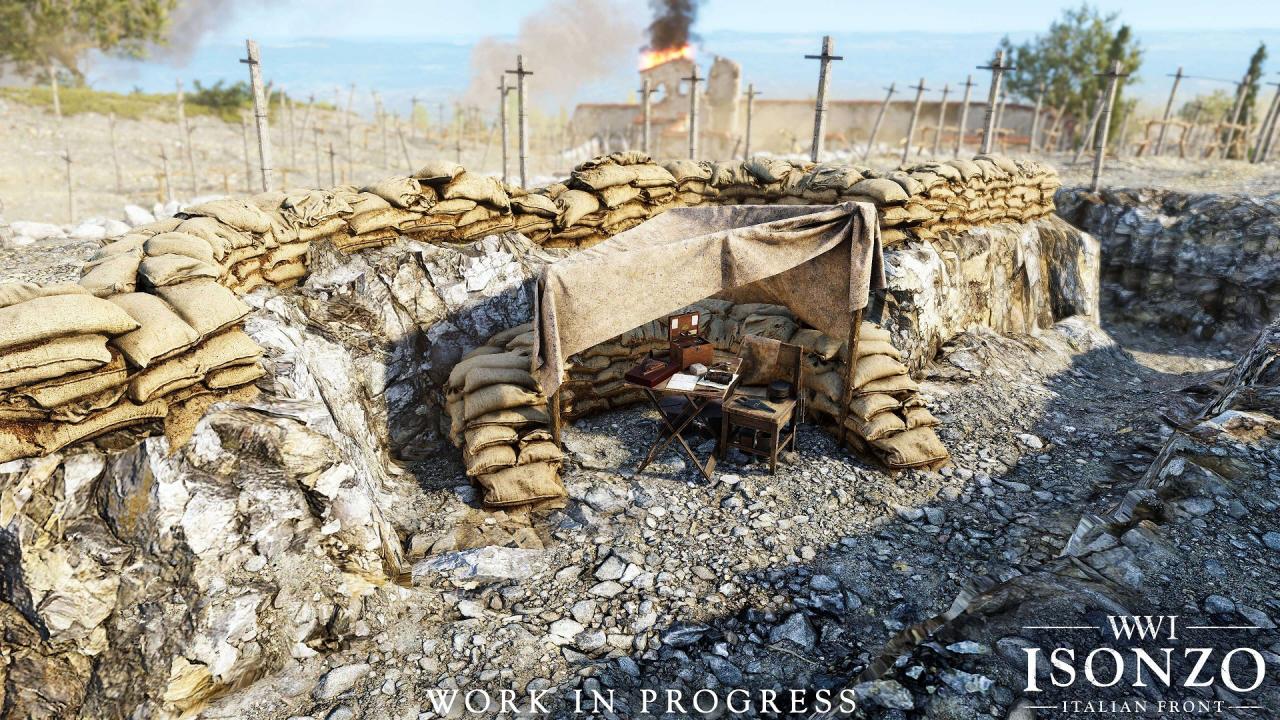 Each sector of the map has an objective (or multiple) within it that must be destroyed/captured (for attackers) or protected (for defenders). Capture points can be taken by the attacker and retaken by the defender if there is still a contested objective, however in the case of destroying materiel, once it’s destroyed there is no way for the defender to repair it.

Each role receives special perks that complement a certain play style. One of these perks can be chosen and switched depending on what modifiers you need in an ever changing battle. More perks can be unlocked for a class by leveling that class up.

Rifles – Rifles are the mainstay of weapons in Isonzo. Hard hitting and useful at range, they have the ability to one hit kill at almost any distance with a body or head shot. Some rifles are equipped with a bayonet, which allow easy melee at close range without needing to switch to a melee weapon.
Rifle Grenades – Some rifles are able to be fitted with a grenade that can be launched further then can be thrown. These explode on impact and damage in a smaller radius than ordinary grenades.
Handguns – Small but manoeuvrable, handguns are great for clearing out confined spaces, however their damage can be lacklustre and enemies might require follow up shots.
Grenades – Deadly if you’re close, when thrown grenades explode dealing damage in a wide radius when the fuse runs out. If you die after starting the fuse but before you throw the grenade, it is still live and will explode.
Static weapons, all constructable by the Engineer role and can be sabotaged by the enemy. Static weapons can be resupplied by the Rifleman role carrying the Ammo Box.
Mortars – These weapons fire high explosives in a high arc ballistic trajectory that enable them to shoot over obstacles. You are able to request spotting from a flare gun user.
Mountain Guns – These weapons fire high explosives at a shallow trajectory, so you can aim and shoot visually at your enemy.
Machine Guns – With a high rate of fire and high damage output, the static machine gun is hampered with a limited arc of fire and a stationary position. 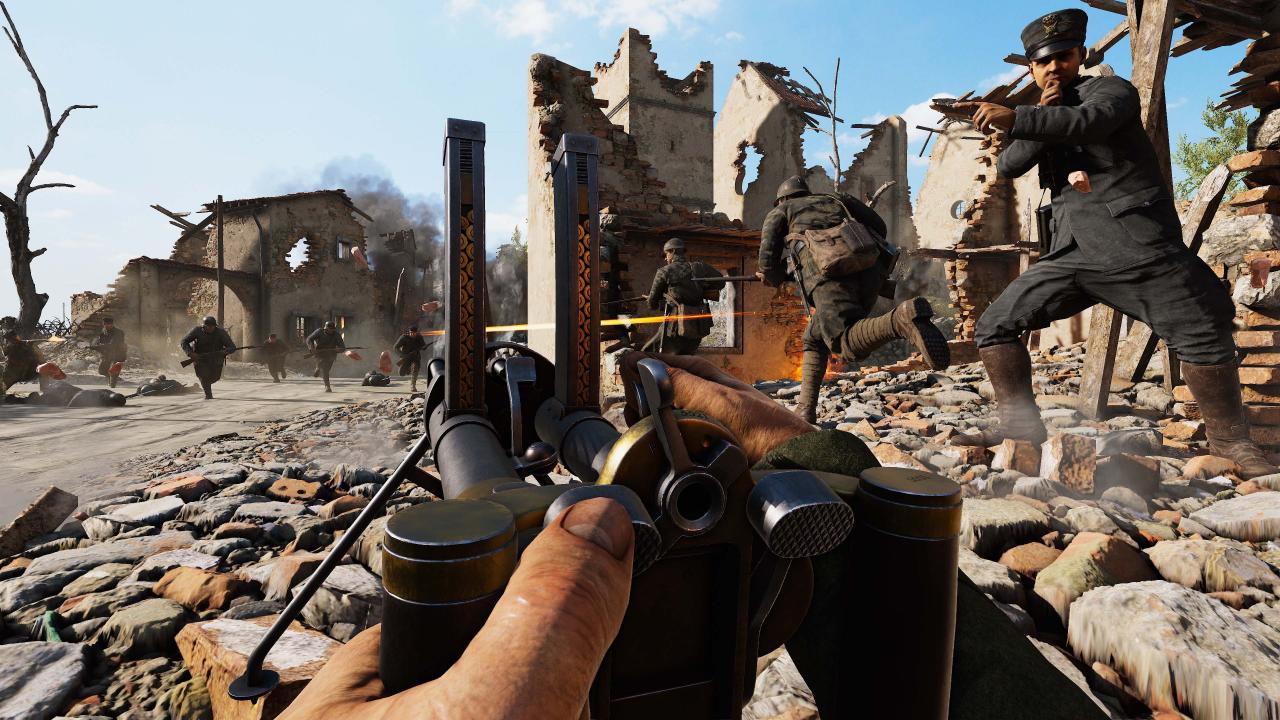 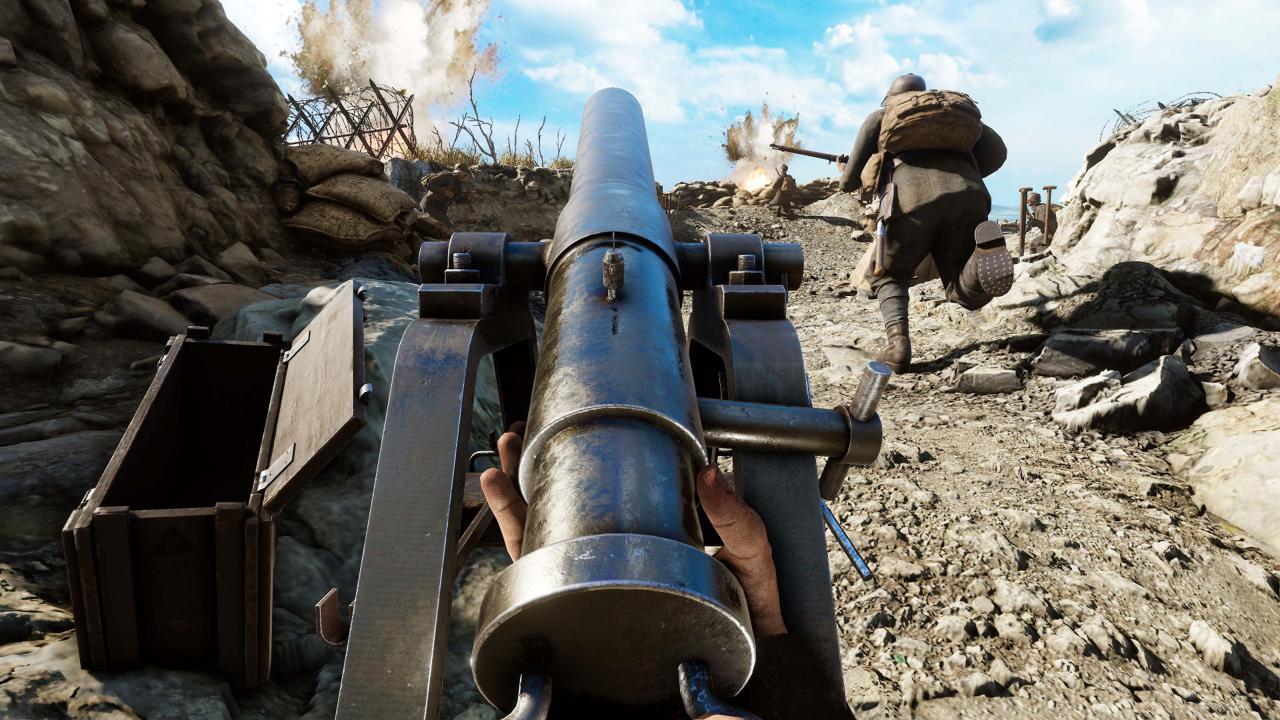 Ammo Box – Is a portable box that allows you to resupply teammates and static weapons when you interact with them.
Ammo Crate – With the “Ammo Carrier” perk Riflemen can build static ammo boxes to help resupply your team without requiring your presence. You also spawn with extra ammo.
Grenade Crate – The “Grenadier” perk for the Assault role allows the construction of a grenade box, which allows you and teammates to resupply used grenades. You also carry an extra grenade!
Spotting – Binoculars, Periscopes, Flares from Mountaineers and Recon Planes called by Officers can be used to spot the enemy for your team to see. Periscopes can be built by Mountaineers with the “Observer” perk.
Canteens – When used Canteens reduce the effects of suppression from explosions and bullets, and temporarily remove stamina loss, allowing for quicker traversing around the battlefield.
Bugles – Using the bugle creates a temporary aura around you, increasing yours and your teammates bolt action fire rate and movement speed.
Whistle – Officers can use whistles to give orders to your team and to temporarily remove the spawn penalty, allowing your team to spawn after dying without waiting.
Bandages – Available to all, bandages can be used to heal yourself from very bad injury, however you will require another teammate to heal you back to full health.

Officers and Mountaineers are able to shoot flares into the air (using the map to aim), which can be used by officers to call in off-map artillery strikes, gas/smoke attacks and aviation assistance. If an Officer fires two flares in quick succession, the ability used on that flare point will be stronger. Call ins have a cooldown per branch, where weaker call ins become available first, then stronger tiers one by one. The branches are as follows: 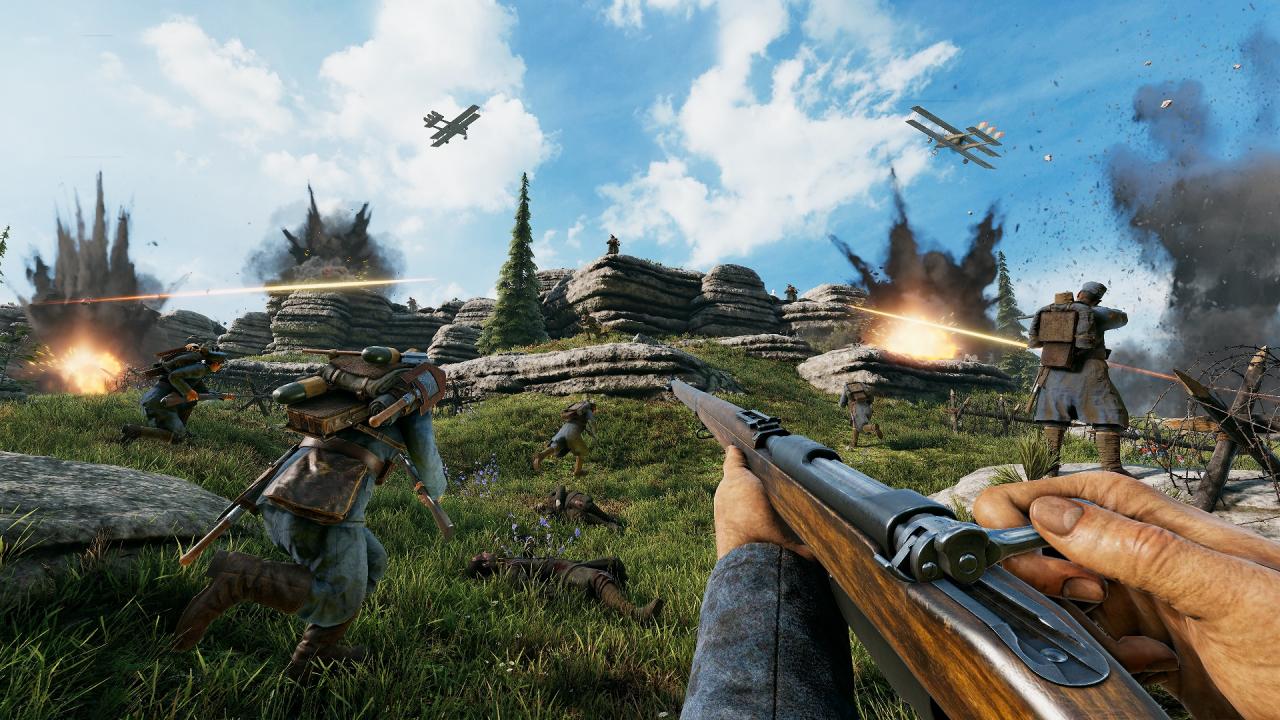 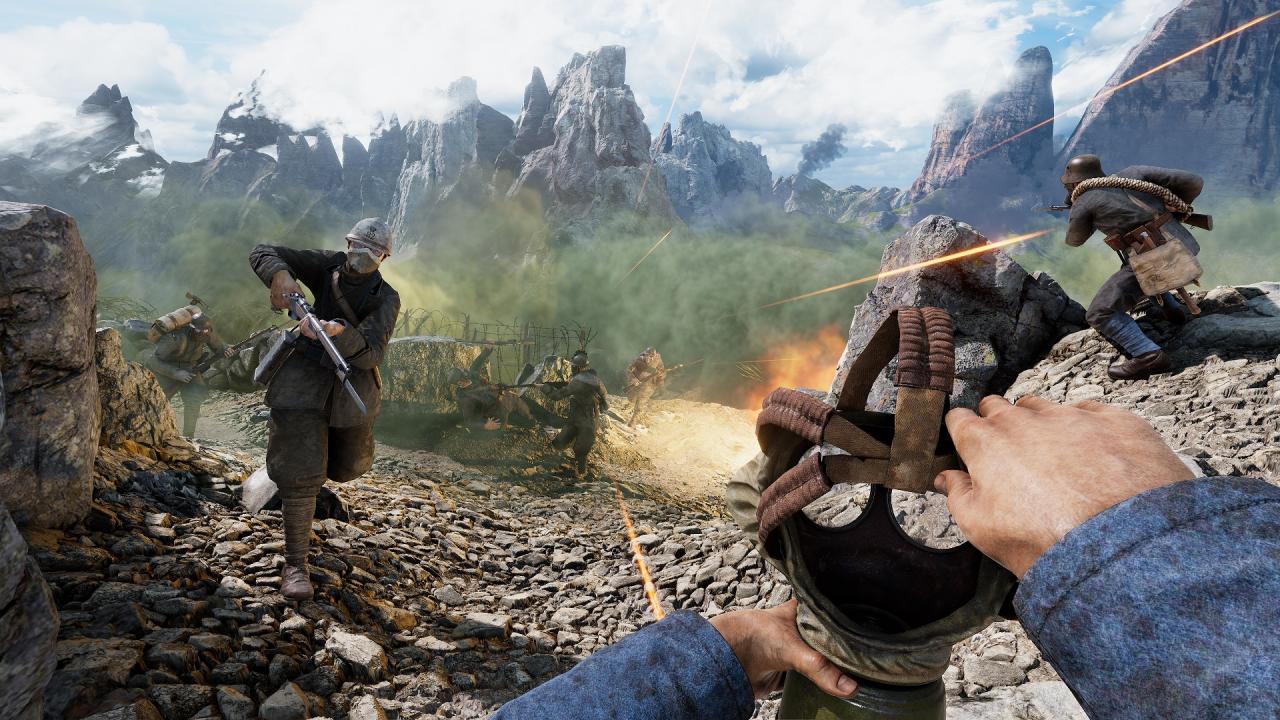 At predefined locations, Engineers can build Machine Guns, Mortars, Mountain Guns and Wire across chokepoints. In addition to this, Engineers can freebuild (with limits) Sandbags, Wire and Sniper Shields to aid your team. Beware, equipment such as machine guns, mortars and mountain guns that have been built can be sabotaged by the enemy, removing them from play for some time! 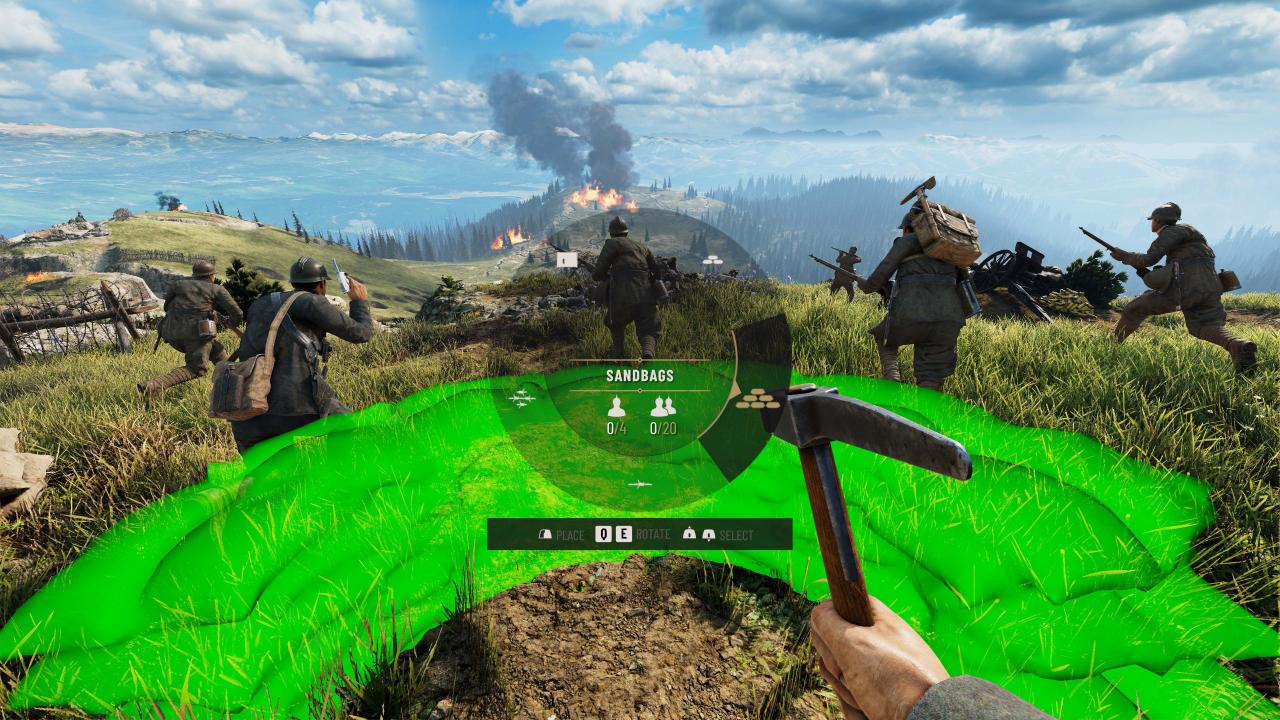 Voice commands can be used by holding the “X” button (default hotkey) and by mousing over or selecting number keys to say the selected message (X 5 1 . These voice commands are proximity as well as squad chat based, otherwise you can use the team voice chat (LeftAlt by default) or the squad voice chat (V by default).

So you are dead… but don’t despair, you will respawn soon! In Isonzo you always respawn in waves with everyone else who has died. The position of your spawn point depends on the position of the enemy. If enemies are close to your teammates or they are in danger, you will not be able to spawn on them. If not, you can spawn as close as possible in a friendly position but only if there are not any enemy players nearby. If there are enemies nearby you may be spawned further back.
The Officer can order a charge which removes the respawn timer for 30 seconds.

The war was brutal and violent, and gore has been added to reflect this. It is an option you have to enable in the game’s graphic settings.
By Harrigarno and LV|lronstorm767