For those crazy enough to seek victory in a Mega Brutal Campaign, here are some tips and strategies that may help.

Recipe for Victory – A Horseshoe and a Rabbit’s Foot 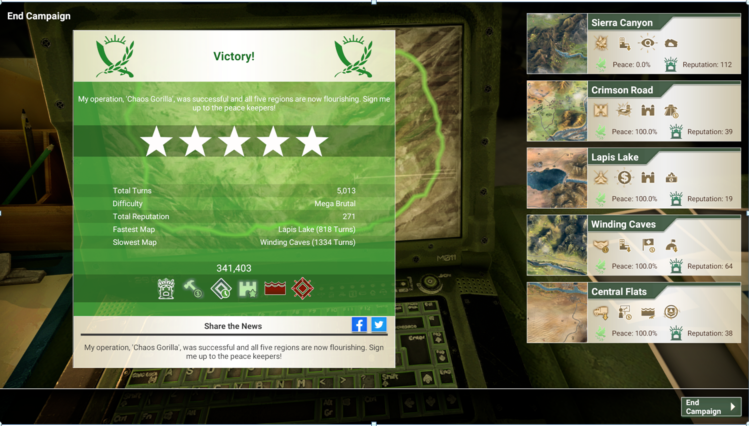 To win a mega brutal campaign, the main thing you will need is luck. If you really want to pull this off, you are going to need multiple and probably many attempts. Sometimes, a bad set of map conditions make winning almost impossible. Sometimes you will get trash picks when you desperately need solid advantages. Sometimes, the insurgents take a tactic that’s a death sentence to your campaign (cough, cough, sleeper cells). Unless you are some kind of god at this game, luck is essential. I’ll assume you aren’t a god because you wouldn’t need a guide if you were.

Be mentally prepared for a lot of failure. 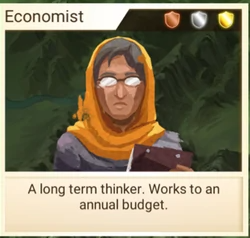 These recommendations may seem kind of meh, but the thing to remember is that you will have to use many governors/advisors that aren’t great if you want to go the distance. They’ll almost always be one use only, so the key is to find situations where they are stronger than normal, especially when they are meh. The economist is a little better for map 1 because the starting map is the most stable you will get. So you start off with an annual budget based on a strong map which means a whole lot of starting cash. The negotiator (kind of a trash advisor) is better than usual here. Because on all maps, but particularly on map 1 you want to win AS FAST AS POSSIBLE.

The reason you need speed is the “resources from stabilized zone” mechanic. How fast you won your past matches determines how fast you get a bonus on future maps. And a timely bonus might save your life (as it saved mine on my desperate Winding Caves match). So crush map 1 as hard as you can with the most ending money and rep you can manage. But always prioritize speed over running up the numbers. That measly $5 and 2 rep that comes in time might save your life later, and you could easily die waiting for the huge $50 and 20 rep that arrives too late because you wasted time.

Sadly for me, I got the “no peace” condition on my first map. I almost did a restart just because a no peace win is always slower, but I guess it worked out in the end.

Anyway, map 1 is probably going to be your easiest map, so I would save your good govs/advisors for later. Keep the purple slot empty since there aren’t enough decent purples to use one on each map. And a loss on map 4 where you didn’t have something you needed is a lot tougher than a no risk loss on map 1.

Other advisors that are stronger than usual in map 1:

These 2 offer advantages based on map stability, so they clearly shine on a map that starts out quite stable. But since their perks are useful and not just throw away like the negotiator’s, it’s up to you whether it’s worth using them up on what should be a relatively easy win. Weigh the pros of a bigger and faster map 1 victory against the cons of losing them for later use and make your choice. There are no “right” choices. For example, I think the negotiator is best to use on map 1, but on my own map 1, peace wasn’t an option. So you have to play it by ear and use your judgement. Personally, I think it is best to favor using up perks that are the least helpful on your easy map and save the good stuff for later.

I definitely owe my mega brutal victory to this tactic – the first one I picked up. I used to not rate this one very high because it seemed to me like getting something to help you win would be better than something that helps you not lose. But the number of campaigns I lost because a soldier got somewhere a half second too slow causing devastating rep losses changed my opinion. This is the best rep option there is at 1-star, and rep is how you will win/lose most games. Compare the War Censorship tactic to Media Campaign (+10 starting rep), and it isn’t even close. You will lose more than 10 rep from insurgent captures in almost every game. And if you don’t, well then it was an easy match where it didn’t really matter. This tactic was the MVP of my winning run, saving my life several times.

This is another tactic I thought seemed like a bad pick originally which I’ve recently reconsidered. One part of my winning mega brutal strategy was “save warlord for the hardest map.” With the warlord, you can get an entire army almost instantly for $4, making even mega-brutal feel fairly easy. How can you lose? Well, what if you could use the unbeatable warlord for every map? I haven’t actually picked Espresso and tried this out, but I feel like a mega brutal campaign win this way could be pretty easy.