Here is a guide on how to protect your chastity and survive 40 days.

This game walkthrough uses the method of quickly upgrade the bank, then upgrade armory, and upgrade the church when it is free.
You will need these skills:

With the use of “cost saving” and “impose taxes2” skills, you can upgrade bank level to lv.max before 31days and get 3000 gold reward from “domestic fundraising” skill, then use these rewards to upgrade armory to lv.max before 20days, with the remaining 20 days to form your team.

“Interests” skill can slightly increase the speed of getting gold. I haven’t tried the “Allowance” skill. But it should be similar.

“stronger Faith” is necessary for 5 knights, so “temporary preach” are needed to ensure hope point can be maintained at 100.

Let’s start with “5 knights tactic” to explain the game walktrough.

40days: Put ahern to the battle zone and See if there is any knight character you can buy.

38days: Spend 200 gold to upgrade the armory, and then buy one any character and put it into the battle zone. It’s better if you buy a knight or Cora.

36days: Billboard “cults appear” event appears. Pay 200 gold to remove it. If you don’t have any 2-star character,upgrade the armory and buy one any character. If you don’t have enough gold to complete these things at the same time, give priority to upgrading armory and make sure you have 3 people in the battle zone. Then remove the cult event in the next day.

34days: Daily checks, and pay attention to whether you have the first 2-star character. If not, consider buying a character with a blue background or above.

32days: There are many things to do on this day. Today, the church can unlock Level 2 for free. After unlocking, you can use “prayer2” skill. By now, the lust point has reached 80, so you can add prayer to the daily check content (follow-up you will judge whether you need to pray). If you are lucky, the bank will be able to reach the full level today. After that, you can use the “domestic fundraising” skill and receive 3100 gold, and then use it all to upgrade the armory. At this time, your armory will reach level 5, and you can place up to 5 people on the battlezone. An orc will come out of this day. If you are unlucky, you can’t upgrade the bank to the lv.max today, and there are no two-star characters, and you can only put three characters on the battle zone, then you must have at least one character with a blue background or above, otherwise it’s dangerous.

31days: Tatoo erosion event. choose Restrain(Chastity +1). If the bank had not been upgraded to lv.max yesterday, it would definitely be lv.max now. After all the gold is used to upgrade the armory, you should have 1000+ gold left. You can consider buying some character who is not a knight. The game can only put 8 people in the battle zone in the end, so you have to think about which 3 sub character to choose. (although there is randomness in Auto Chess, it’s not that you can level up what you want, but depends on what you have. But the 5 main characters(knight) can definitely gather together and level up to the 3-star, that is, the other 3 sub characters are not sure who they are until you see them.) after the end, enter the next stage.

30days: Daily checks now: Check whether the lust point is too high and need to pray. Check whether there are knight and other characters you want to buy, and check whether you can upgrade amory. (remember to fill the battlezone after upgrading armory)

25days: Repeat the daily check. By this time, you should have 5 knights, most of the them are 2-stars, and you have orange background character

20days: If you’re lucky, you can’t upgrade the armory this day, because there may be several orange background characters you have bought in the past few days.

19days: Upgrade the armory and enter the final stage. 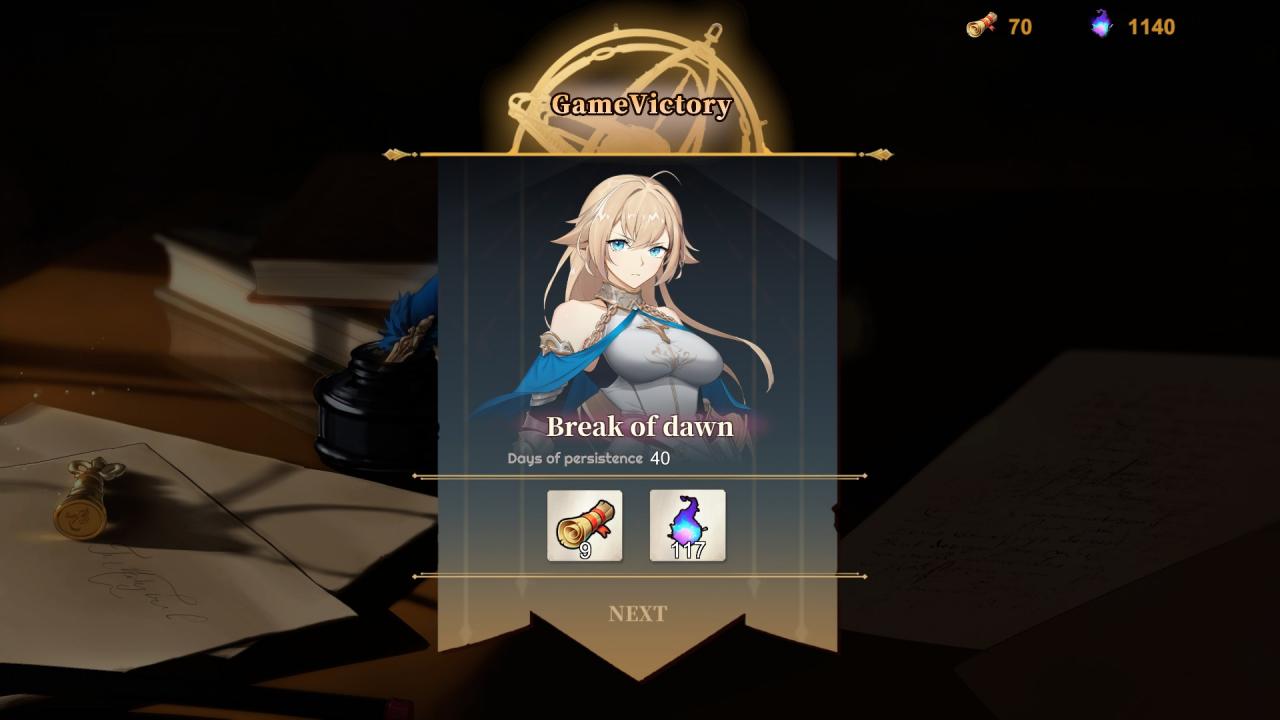 After my test, the team combinations of non 5 knights also applies to this tactic

The core of this tactic is to quickly get a large amount of gold to upgrade through those skills. Use 5 shooters and 3 warriors, 5 mages, 2 knight, 1 others are also OK. Skills can be replaced except those related to money. As long as you still take the path of profiteering, it will work. The key point of team matching is that there must be pressure resistant character (warriors, paladins) in the front of battle zone, and the number of them should not less than 2. It is easy to be defeated if it is all mages and shooters.
Of course, this is only one of the ideas that can win. If you are interested, you can try other skill combinations and team composition by yourself.