A complete map of the Far Far Range. Including The Wilds, Ogden’s Retreat, Mustache Island, Mochi’s Manor and Nimble Valley! With locations for all Map Nodes, Hobson’s Notes, Slime Gates, Treasure Pods, Gordo’s (Slime Keys and Teleporter’s), Slime Statues, Oasis Buds, Vaults and Kookacracker’s. Everything and anything you’ve ever wanted to find all in one place!

Note: We have also updated the map since update 1.4.

Be warned, there are spoilers ahead.

The Ultimate Map of the Far Far Range: 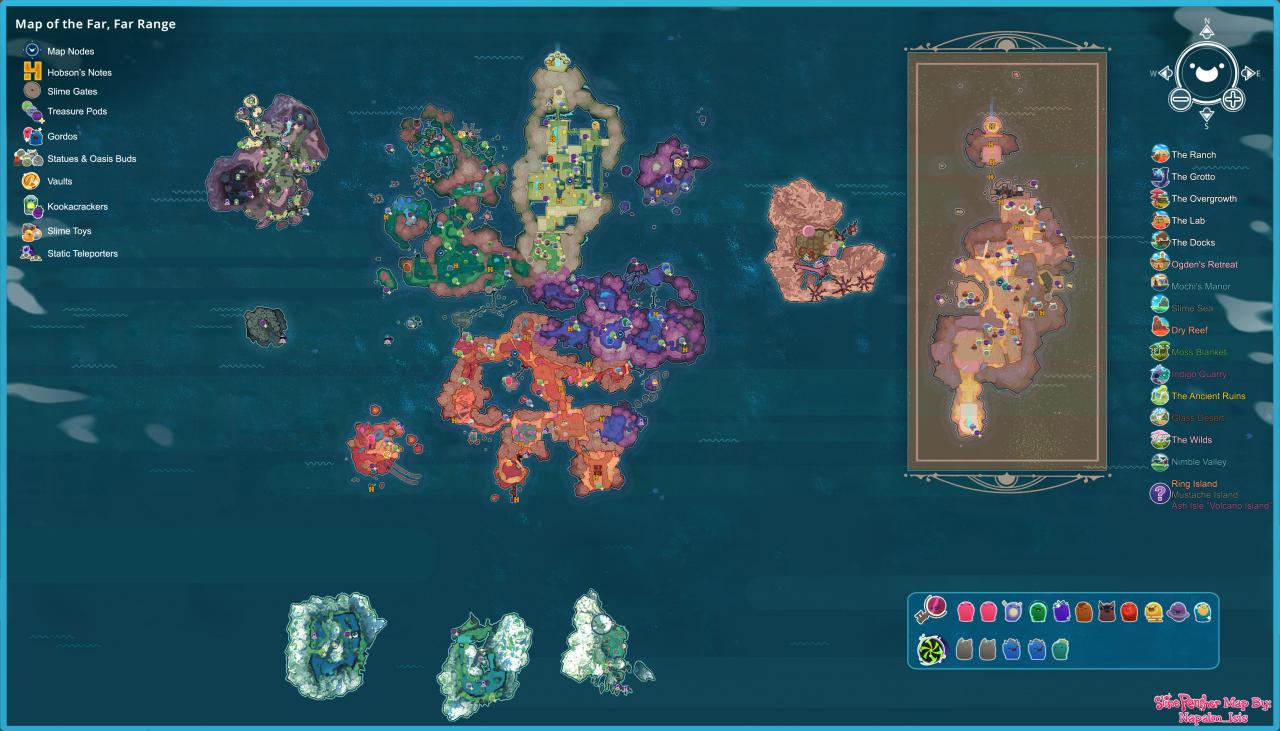 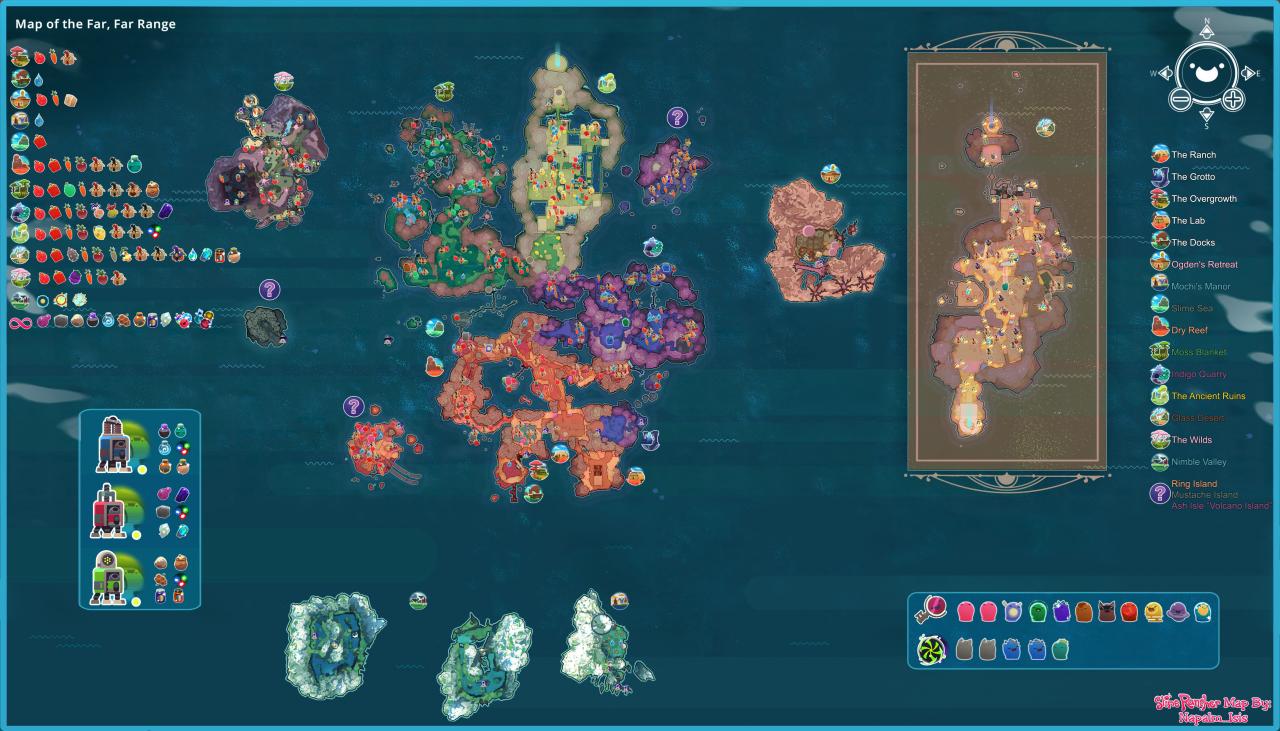 (Want a closer look at that elusive island we call The Wilds, keep reading.)

It’s a tale as old as time: you start playing Slime Rancher. You fall in love with the Far Far Range and your slimes. You upgrade and unlock your ranch until that fateful day Ogden sends you a message, asking for your help. You hurry off to The Wilds only to become horribly lost. And faced with the hardest decision you will make in this game: stay lost in the Wilds while your ranch falls apart or use the emergency teleport and loose everything you’ve gathered. Quick online searches don’t help you. Nor are most forum comments useful on the subject. The two attempts for a map of the Wilds that I found (one hand drawn and disproportional, the other unfinished) are confusing and nearly useless. Even Slime Rancher Wiki’s have disconnected pieces that are of little help to the newest adventurers. But no more!

Four months ago, I began making a map that would have everything in one location. Mostly so that when my child wanted to know how to find (all of Hobson’s Notes or) several things at once in their game I could pull up a single file rather than hunting around for everything. And partly because I didn’t want to deal with “Mom, I’m lost! Can you help me?” more than is absolutely necessary. In no time at all I had compiled the bulk of the Far Far Range… except The Wilds.

After starting a new game for the purpose, I gave myself infinite flight, flew to the highest spot I could find and began taking flyover images of the Wilds. It’s taken me three month to piece all those (695) images together properly. Then I began painting over the main areas to make it visually easier to navigate and so it would blend better with the original style of the Far Far Range Map. Once that was done, I flew back and forth over the Wilds countless times, marking all the item locations found there.

This is the result. It’s not 100% accurate, however it is the most accurate map of The Wilds I’ve found yet. It’s close enough though to give you a good idea of where you’re at and where you’re going.

The Wilds – Food and (most if not all) Kookadoba spawn locations: 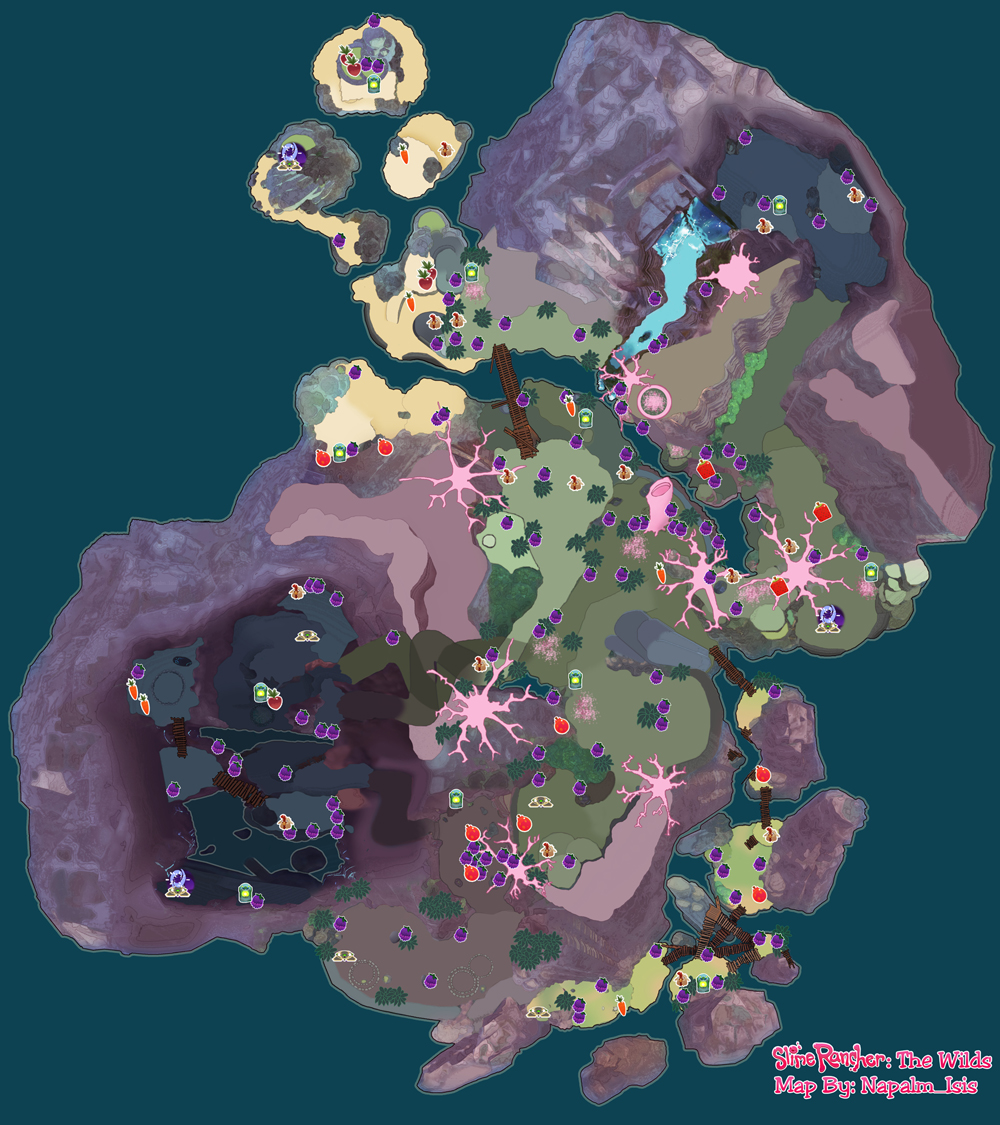 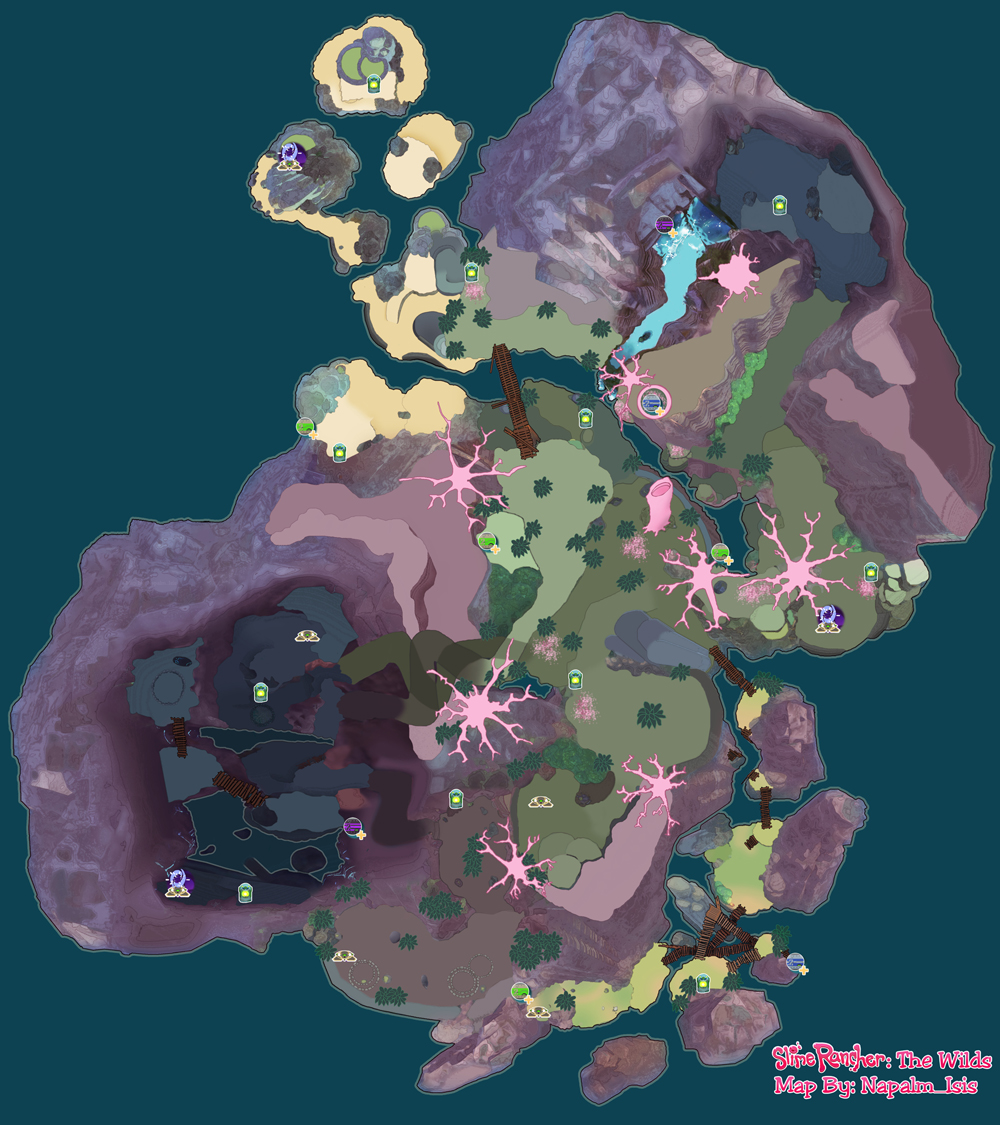 Complete Map of Viktor’s Workshop and the Slimeulation (V 1.4) By Vincent Longiug

The lack of map/mod allowing us to admire the new areas offered by our friends is struggling. Fortunately, Napalm_Isis was here to provide us all the required informations about Far Far West prior 1.4.
And here is the small stone I’m adding to this masterpiece : a full map of what Viktor’s Experimental Update brought to us : 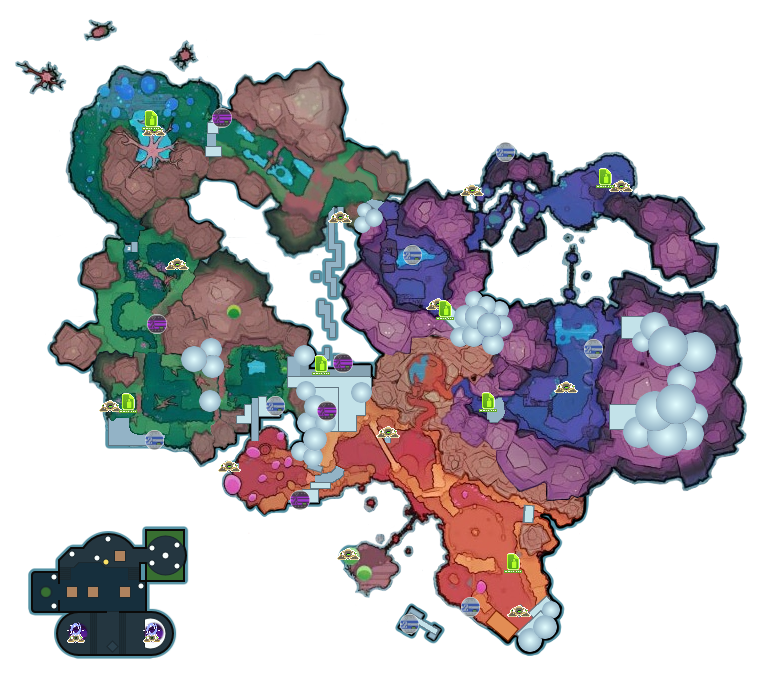 Location of Viktor’s Workshop relative to the Slimeulation is inaccurateSince you cannot take anything from the Slimeulation, I’ve only showed Exit portals, Debug Spray and Treasure Pods locations. It may not be perfectly accurate, but precise enough to satisfy anyone (especially someone willing to create a Slime Rancher Full Map Mod 😉 ).

Full Map of Far Far West since 1.4 By Vincent Longiug

And here’s what it looks like when you mix everything together: 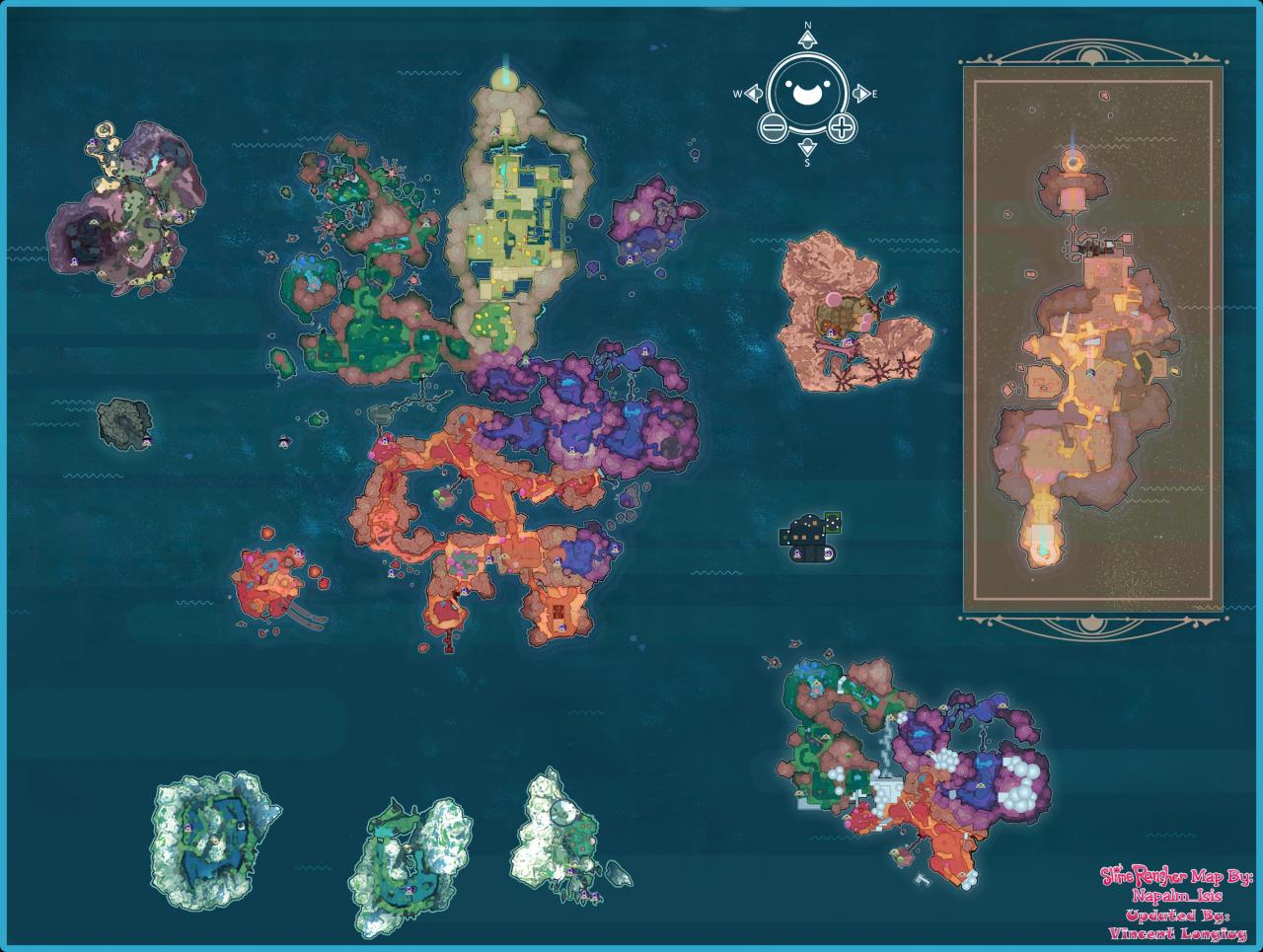 Again, location of both Viktor’s Workshop and the Slimeulation relative to the other islands is inacurate.
By Napalm_Isis and Vincent Longiug