This brief guide shows the different options for Moon Gear that can appear.

The purpose of this guide is mostly just to show the possible gear that can come up when opening a Moon Gear box. If you wish to keep yourself unspoiled, then you should leave now.

Bonuses that say % or x are level-dependant. All Summaries below are my own personal opinion; if you disagree, comment on it and I may be convinced to change my mind. 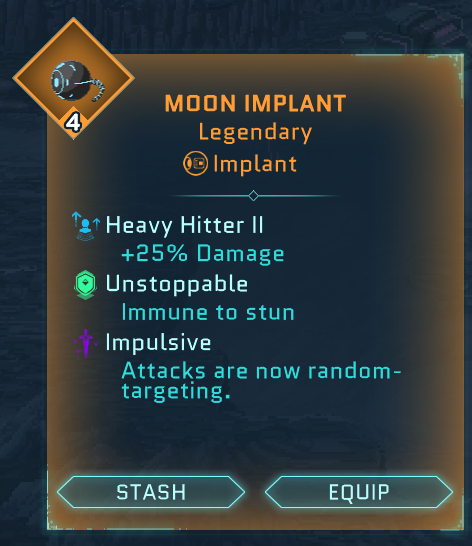 Summary:
This implant gear is one of the more reasonable moon options, but very situational. Random-targeting affects AOE attacks, so don’t think you can get away with using AOE attacks to bypass this effect. It has no effect on abilities like Mop Up which are already random, so it’s useful on someone who uses that, or if you happen to pick this up before fighting a boss that doesn’t summon. 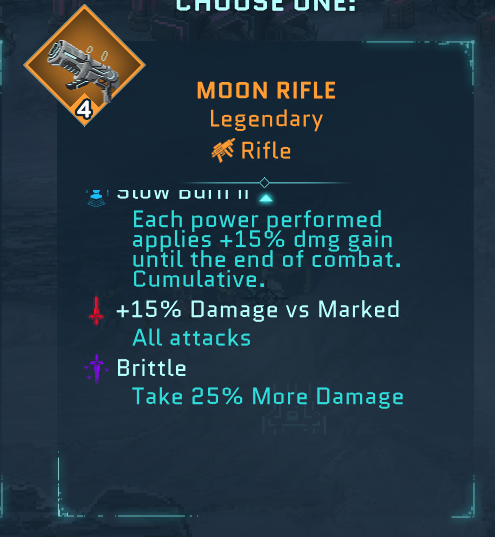 +% Damage vs Marked:
All attacks.

Summary:
The rifle is quite good in theory, but too limited on who can best use it. You absolutely need to protect the user, and it might not be reasonable on higher difficulties where you’re bound to take damage at some point.

Marksman is the only character who can really make use of this weapon to its potential because Wing can be used multiple times a fight. Combos do not count towards this bonus and neither do instant self cast abilities like switching Auras or Stealth Mode. Stuns will, but you can only use them once a fight so this is not overly helpful. And of course, spamming this will eat up your Fury quickly.

+% Marked Damage is good but in most cases you’ll be better off using any other Rifle. 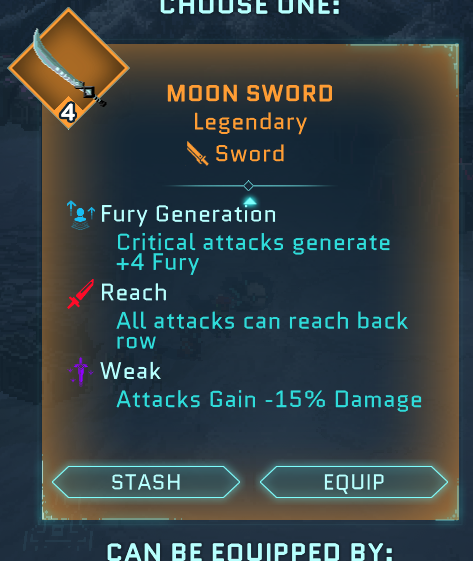 Reach:
All attacks can reach back row.

Summary:
The sword is actually pretty decent. Fury generation is always welcome and somewhat makes up for the reduced damage. Reach is a great affix, and potentially frees up your implant. Some sword users like Wynn end up being stuck in a Stagger/Armour breaker role anyway, so giving them more reach is great.

Weak is worded badly, but what it actually means is that your attacks are weaker, it doesn’t weaken enemy damage, that is a different status entirely. -15% damage is not the end of the world, and may very well be worth it for some characters. 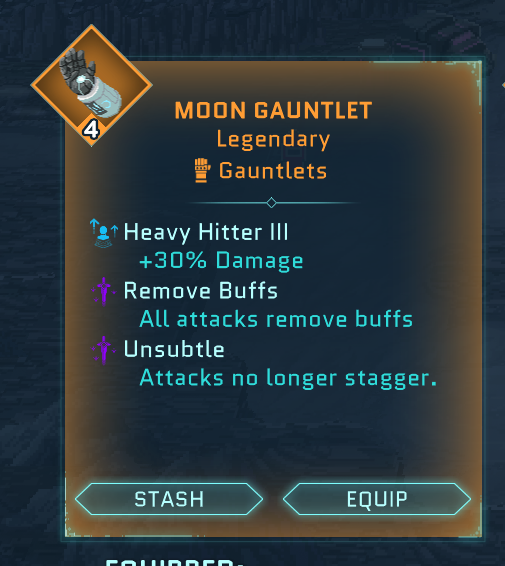 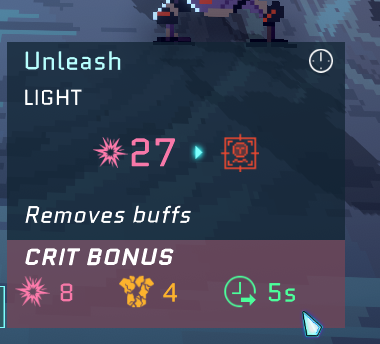 Wow is this one bad. How many gauntlet users are willing to do a fair amount more damage for the complete inability to contribute to staggers? Oh, but it’s actually worse than it sounds, what it really does is lowers your stagger to 5s, instead of completely removing it.

So not only are you eating up stagger hits, but you’re completely neutering the secondary role on almost all gauntlet users.

Removing buffs is not that amazing, and the awesome Debilitator Rifle already does this.

This one gets my vote for worst of the moon gear, but there’s probably a single character out there who can make use of this that I’m not thinking of. 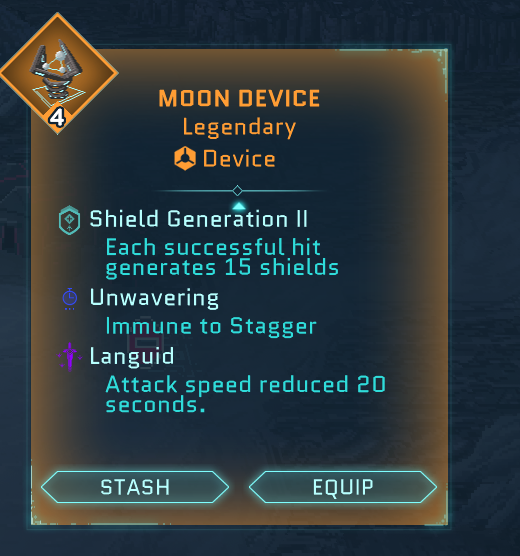 Summary:
This one is once again situational, but a lot more reasonable than some of the others. Already-slow characters like the Varangian or the Juggernaut may not care about the -20s speed on their attacks (though it does suck losing instant cast on Unleash or the like). Generating shields on every hit could be very good if you happen to have a Flurry or AOE attack. It might even make Davion better if he can donate shields to the team and then generate a bunch using his Shield Siphon on top of this.

Unwavering is pretty pointless as a helpful affix since you shouldn’t be getting staggered in the first place.

Reduced attack speed won’t matter if you can find other ways to stagger your enemy, but it will probably reduce the user’s ability to stagger/crit themselves, so take that into account. 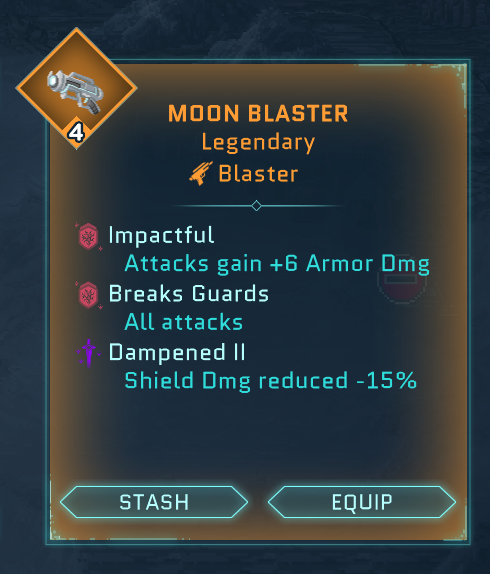 Summary:
The blaster is actually good, especially for bosses with a lot of armor where you spend most of the fight whittling down their armor long after their shields have gone down. Even better, this works with flurry attacks, massively increasing your armor shredding potential. Breaking Guard is just kind of icing on the cake, since guard is only used by a few enemies anyway, but it’s nice to have.

Overall, this might be the best of the moon gear, since the downside is a little bit annoying but the upside is so good that it’s a pretty clearly worthwhile tradeoff.