My keybinds will make System Shock as ez to play as cod. 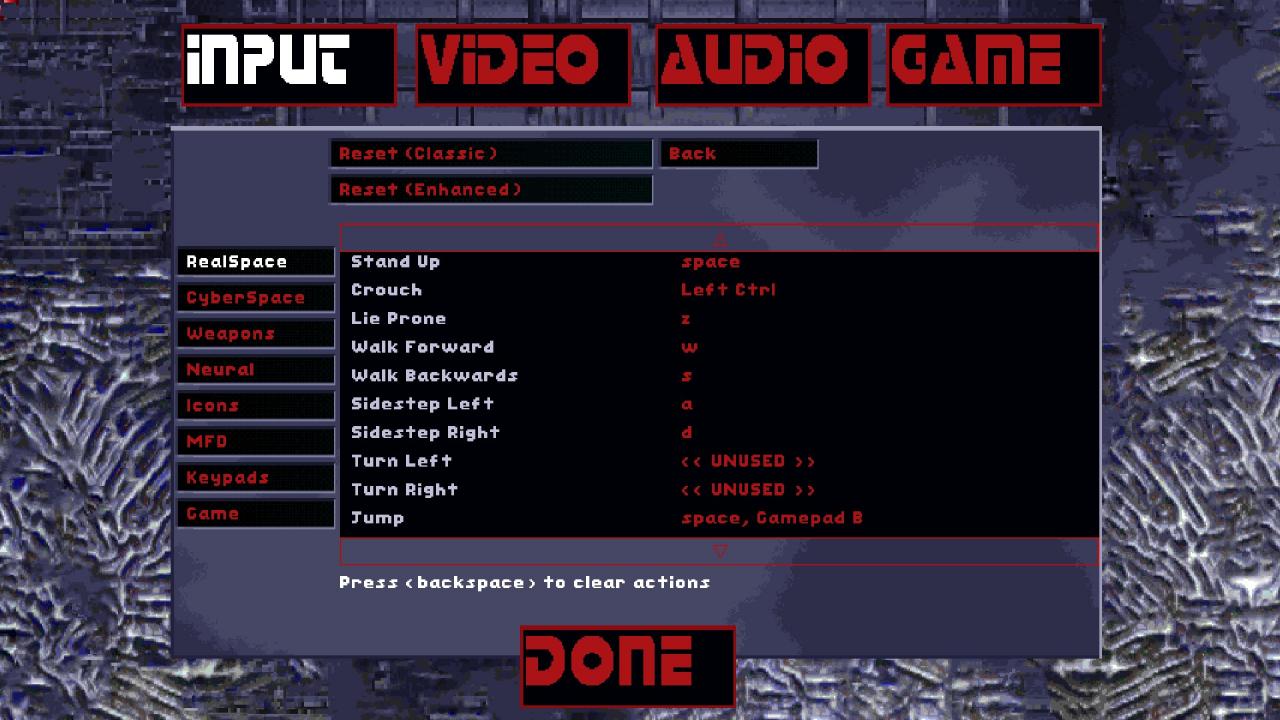 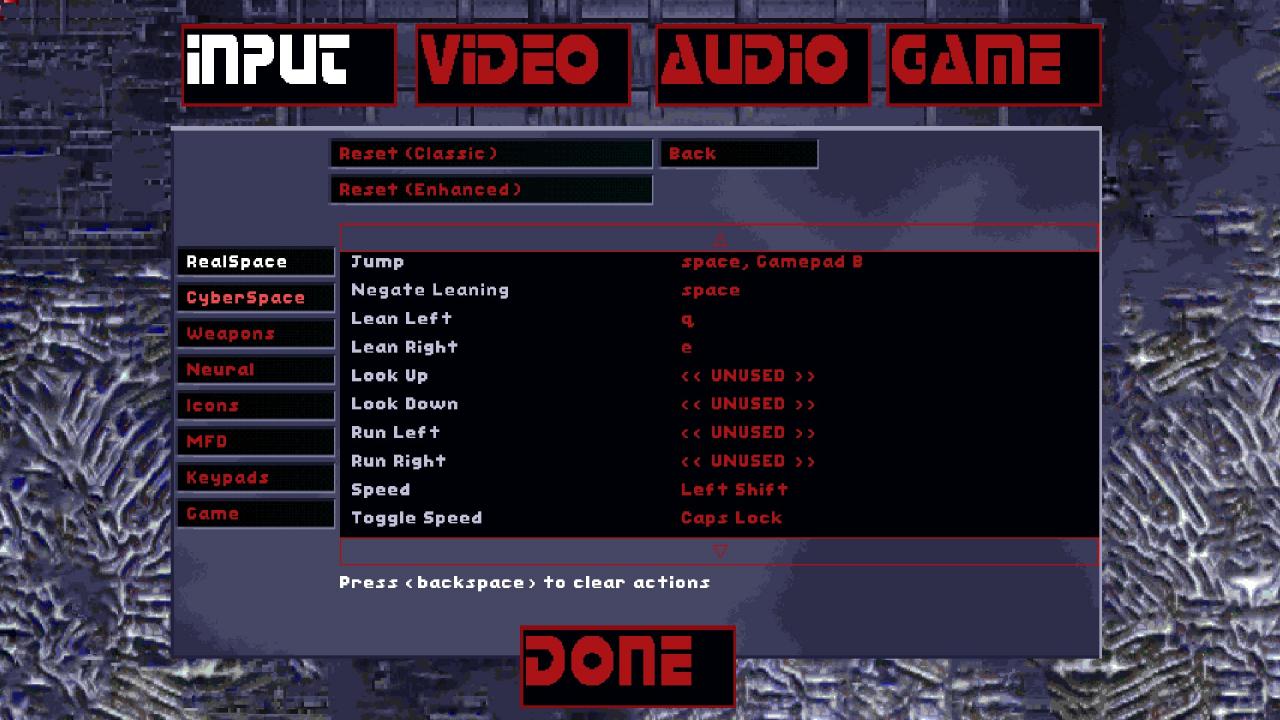 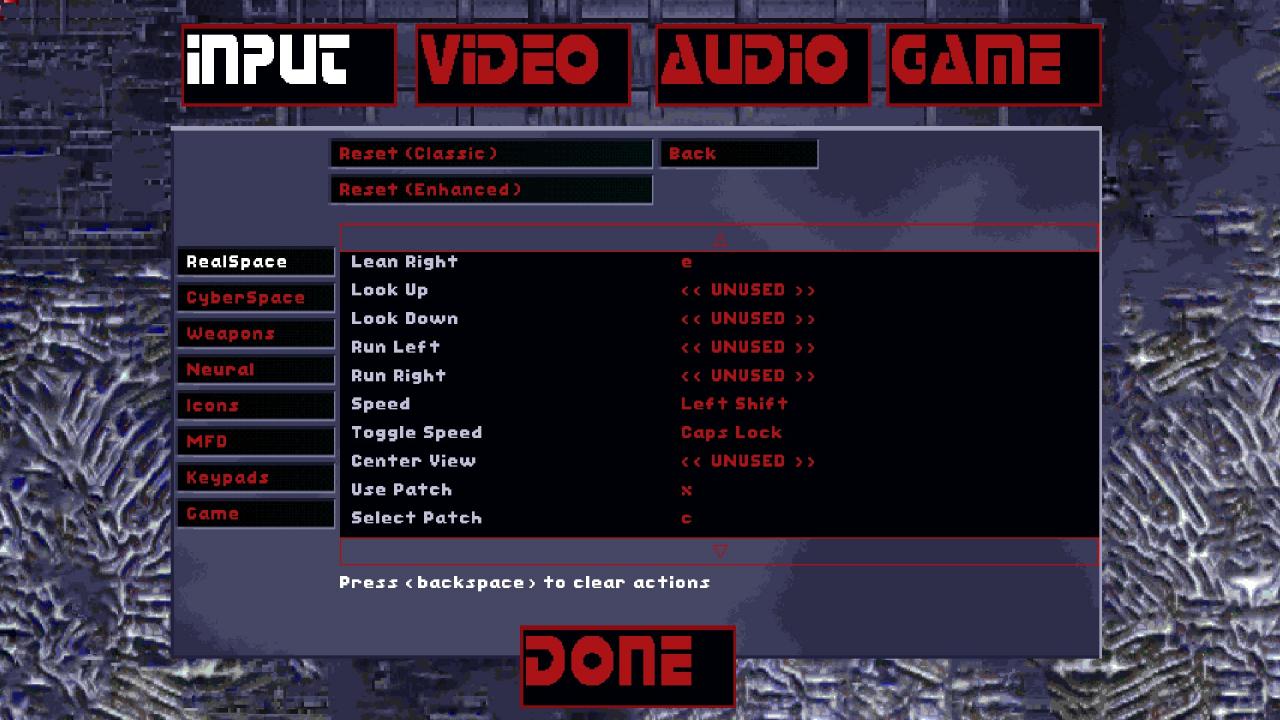 Stand up, jump, and negate leaning are all bound to space. Similar to how stand up and jump are space in cod. In system shock leaning is more similar to a toggle than a hold, and leaning in the other direction does not correct this perfectly as you will likely over or under compensate and lean a very small amount off centre. However leaning is similar to a hold in that it is fluid and you can modify how much you lean by how long you hold a lean key. Using space to negate leaning is good because it is mechanically similar to negating stance to stand and wont expose you as jumping while leaning will only make you jump straight up from where you started leaning, not where you are leaning to.

Additionally, keys under wasd are commonly underutilised and can be easily repurposed as miscellaneous functions. 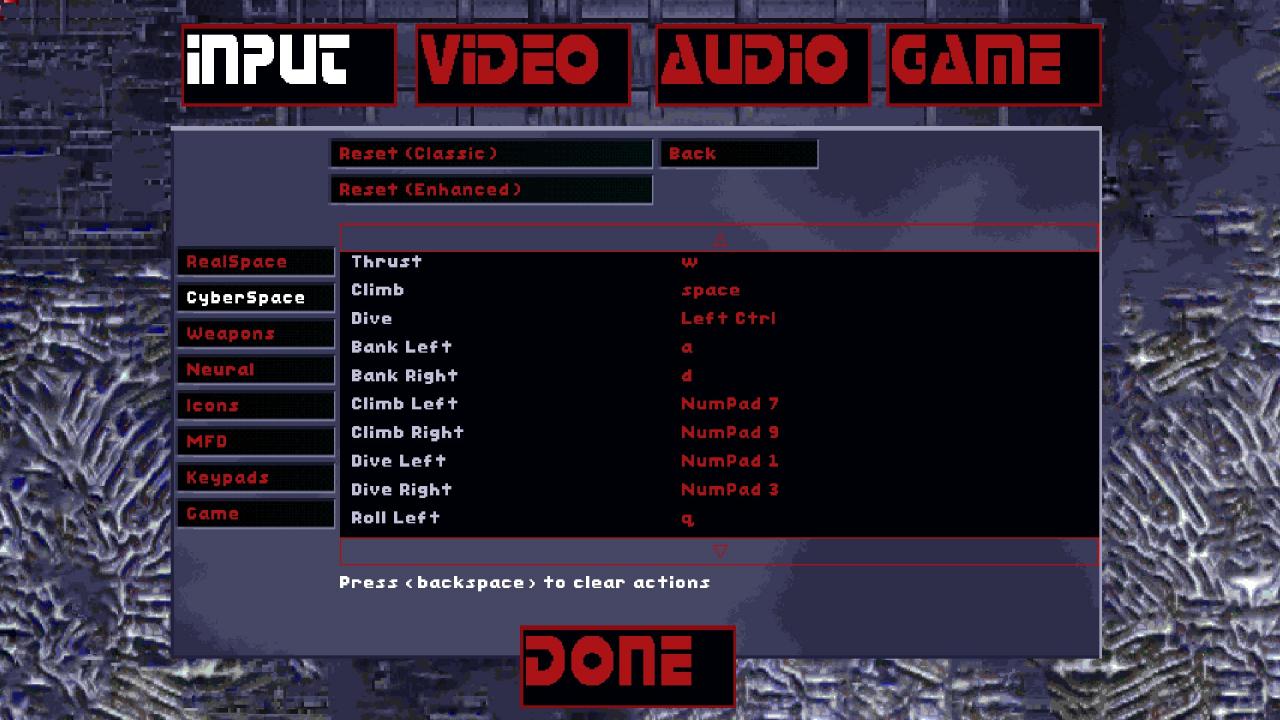 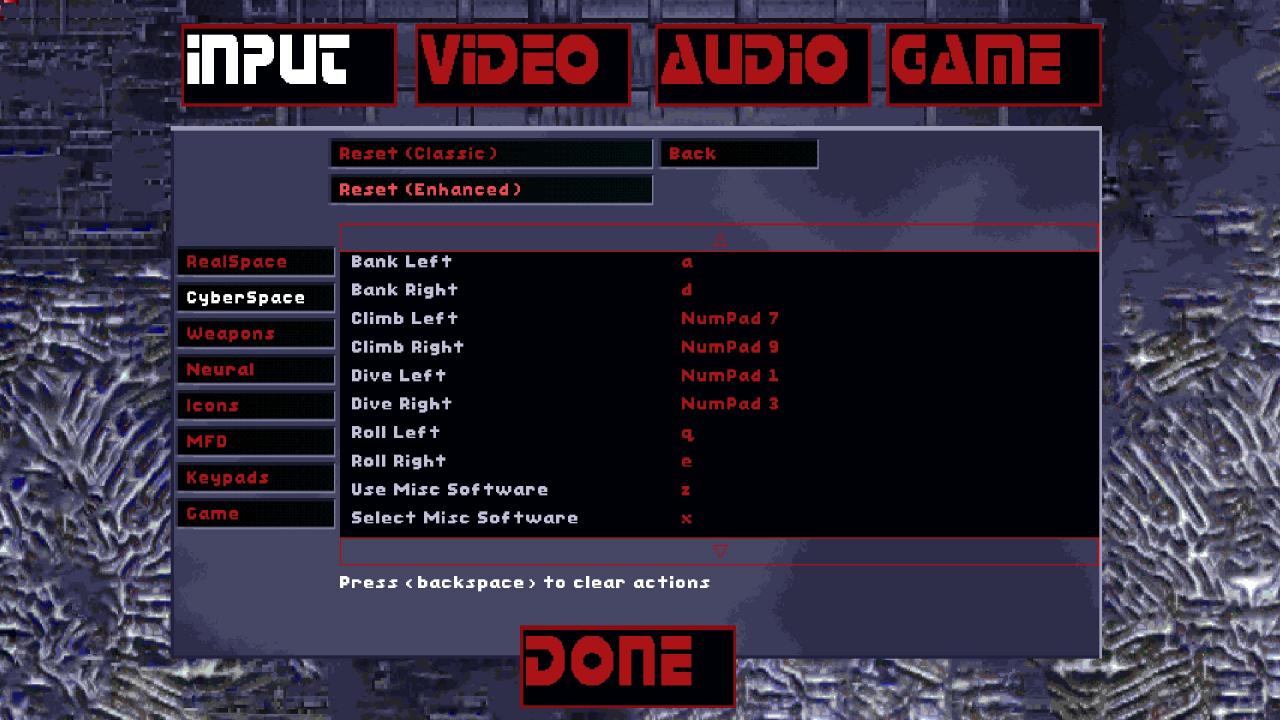 Simple changes that are more intuitive to fps fans and utilise miscellaneous unused keys. Dont worry about keys here colliding with those in other sections as cyberspace is a very separate experience to real space and doesnt share alot of mechanics or need of keys.
Weapons 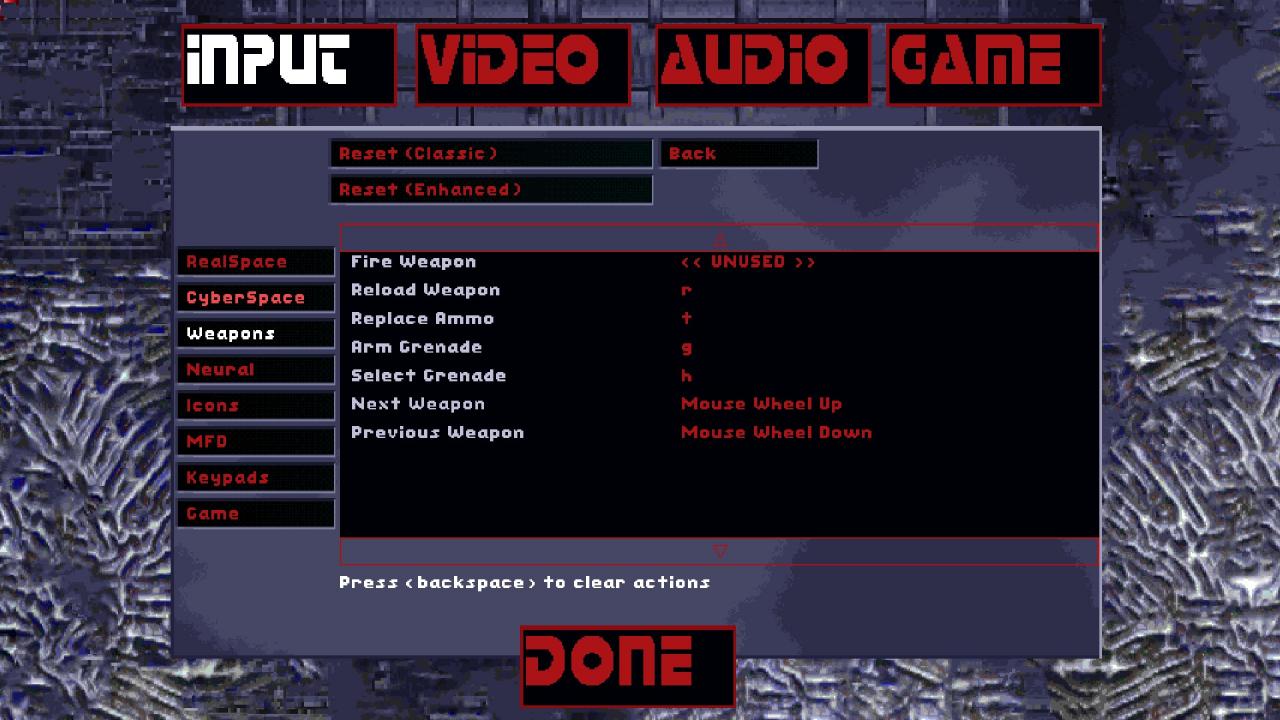 Fire weapon is unbound here because in a later section the secondary click function does the same thing but more. Replace ammo is ‘t’ because its adjacent to ‘r’ for reload and select grenade is ‘h’ for the same reason as this should be intuitive by association and position as well as easy to remember.
Neural 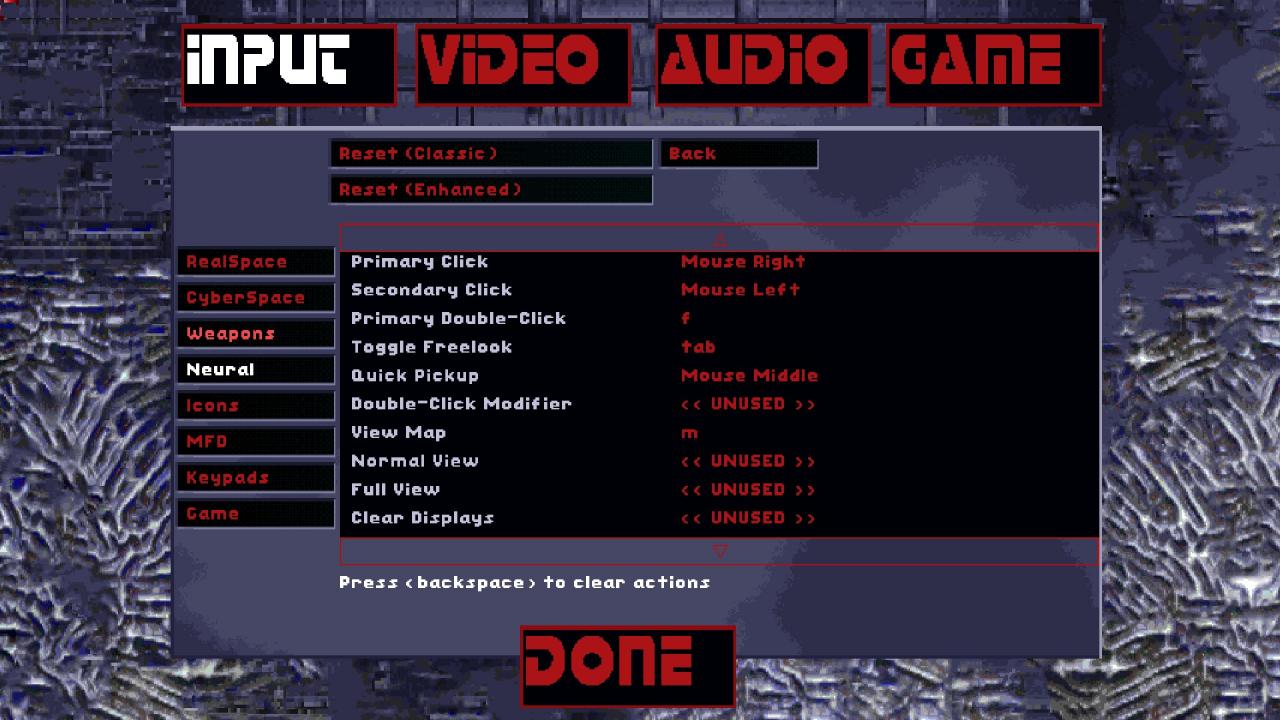 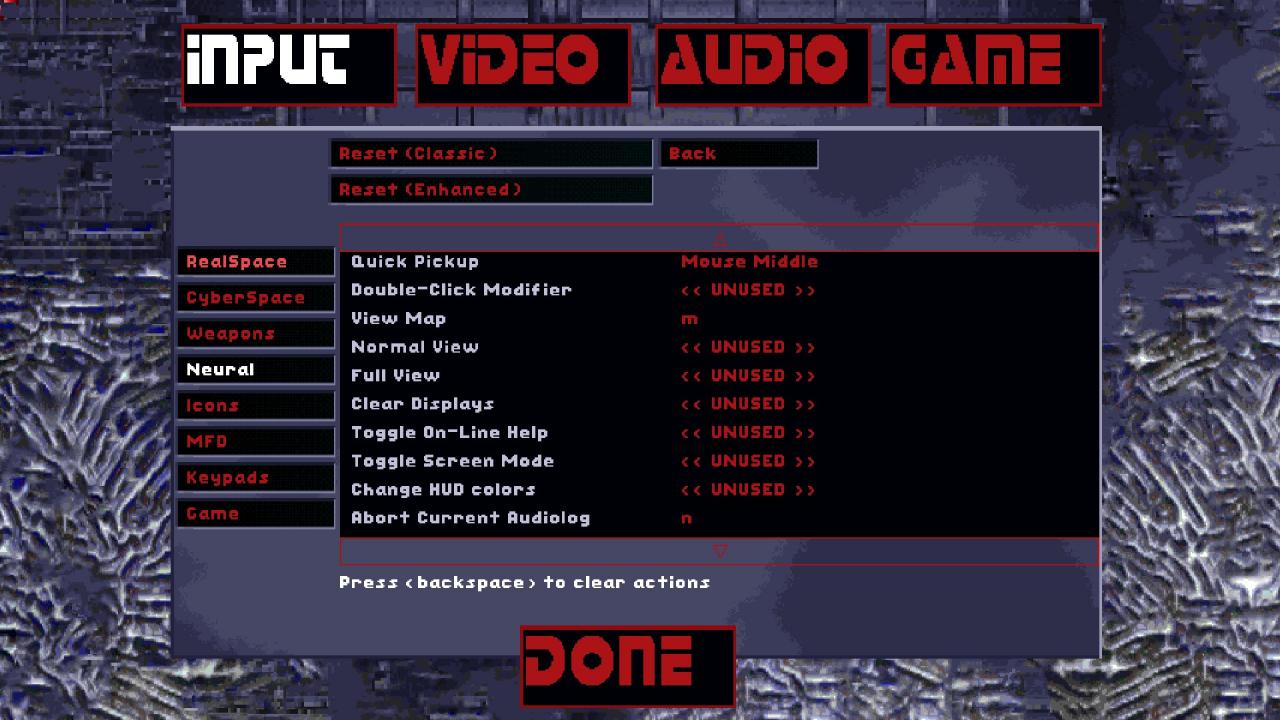 Primary double click is ‘f’ because while primary click is useful in menus it is not useful in real space as opening doors, looting corpses, and other interactions require you either primary click twice or double primary click. This is better than primary clicking twice as you wont need to do that and because it is similar to other games.

Toggle free look is tab because free look allows you to interact with menus such as your inventory. This is better than ‘i’ because tab is closer to wasd than ‘i’. 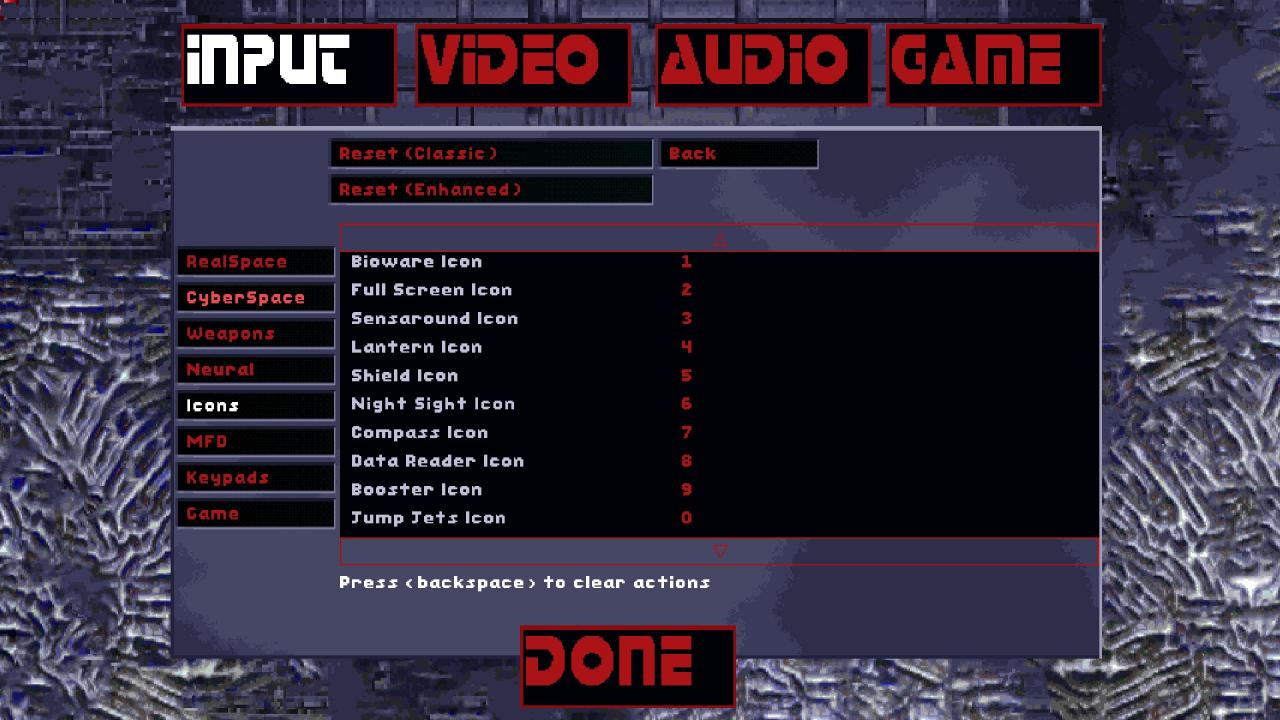 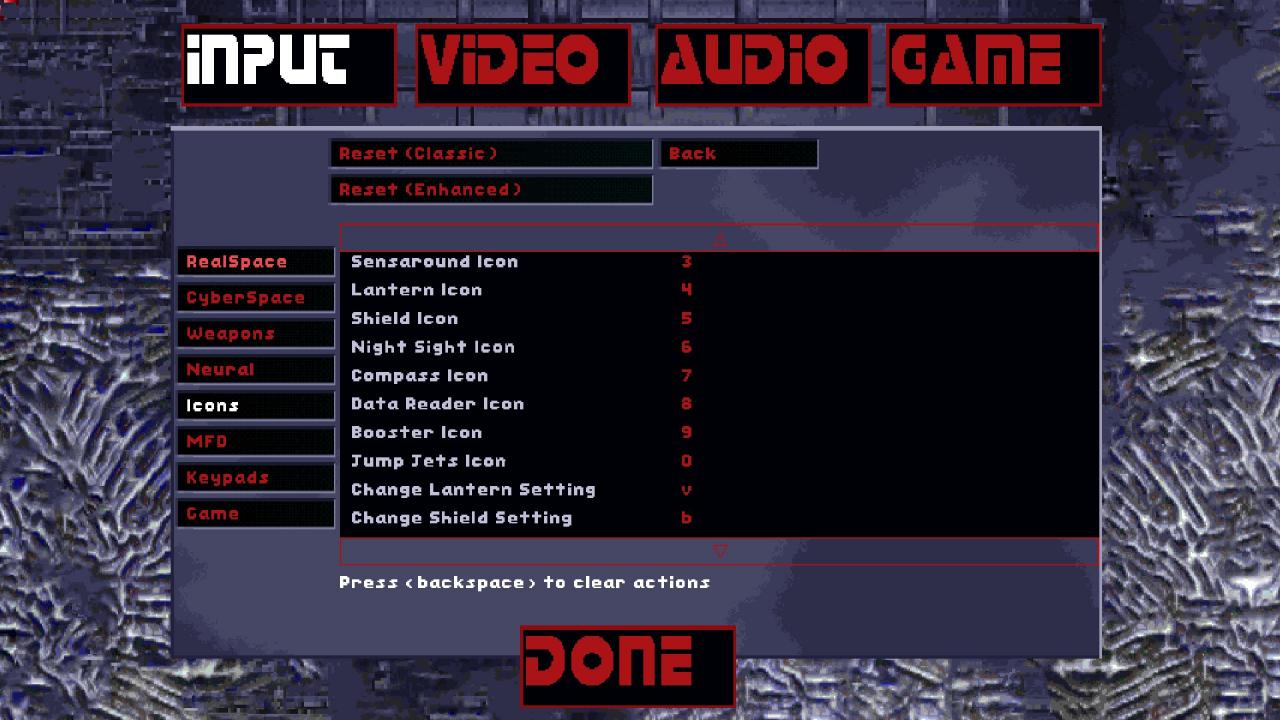 Not much to improve upon here. I would assign numbers to weapons if I could because most icons are useless but thats not possible as far as I know. Change lantern setting and change shield setting are ‘v’ and ‘b’ respectively as they are unused, miscellaneous keys, close to wasd, and not a shortcut of two or more keys.
MFD 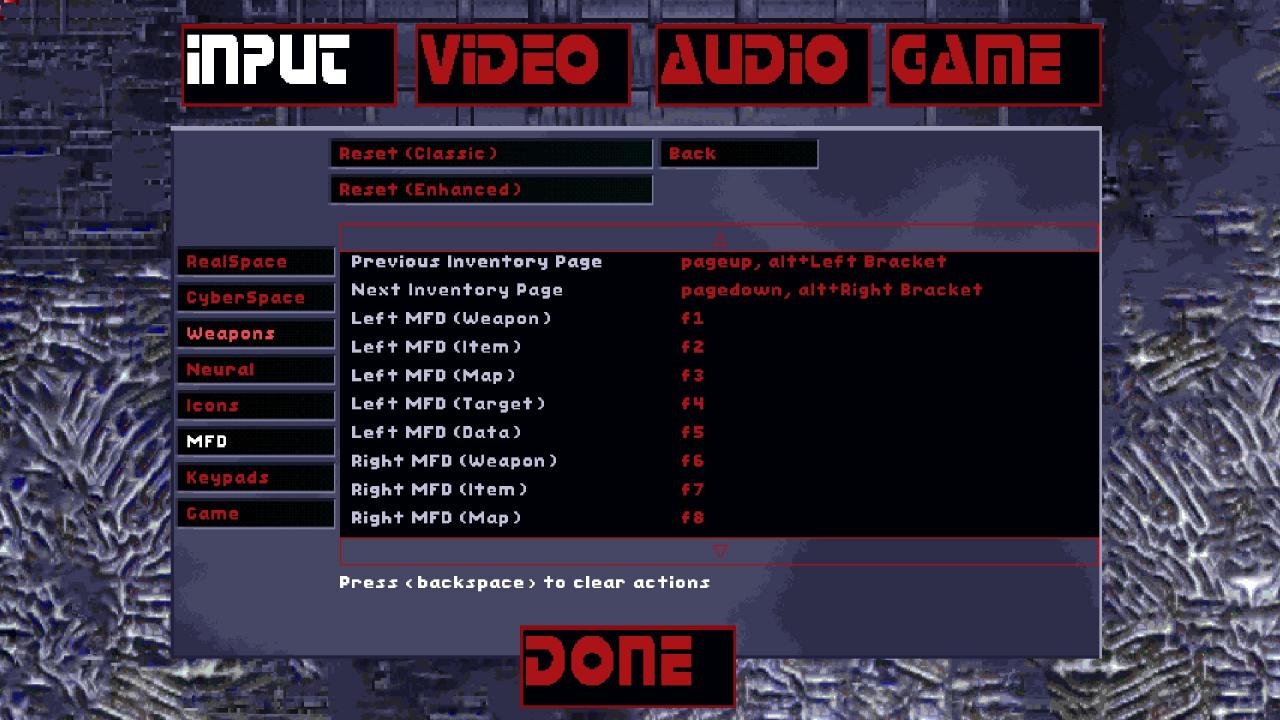 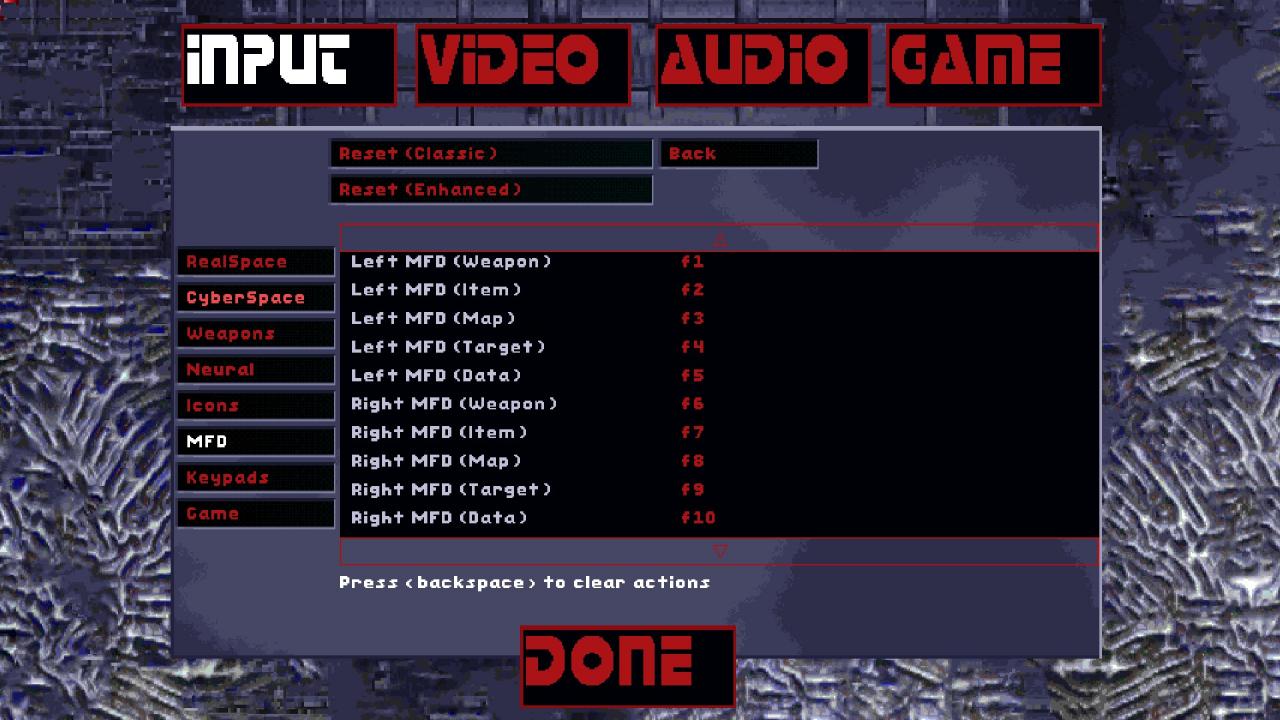 All keys here are default because page up and page down to browse inventory is not something you will need to do often and is easy enough to remember unless youve never used a keyboard before. If I remember correctly pressing the function keys to activate these commands has done nothing so dont worry about them.
Keypads 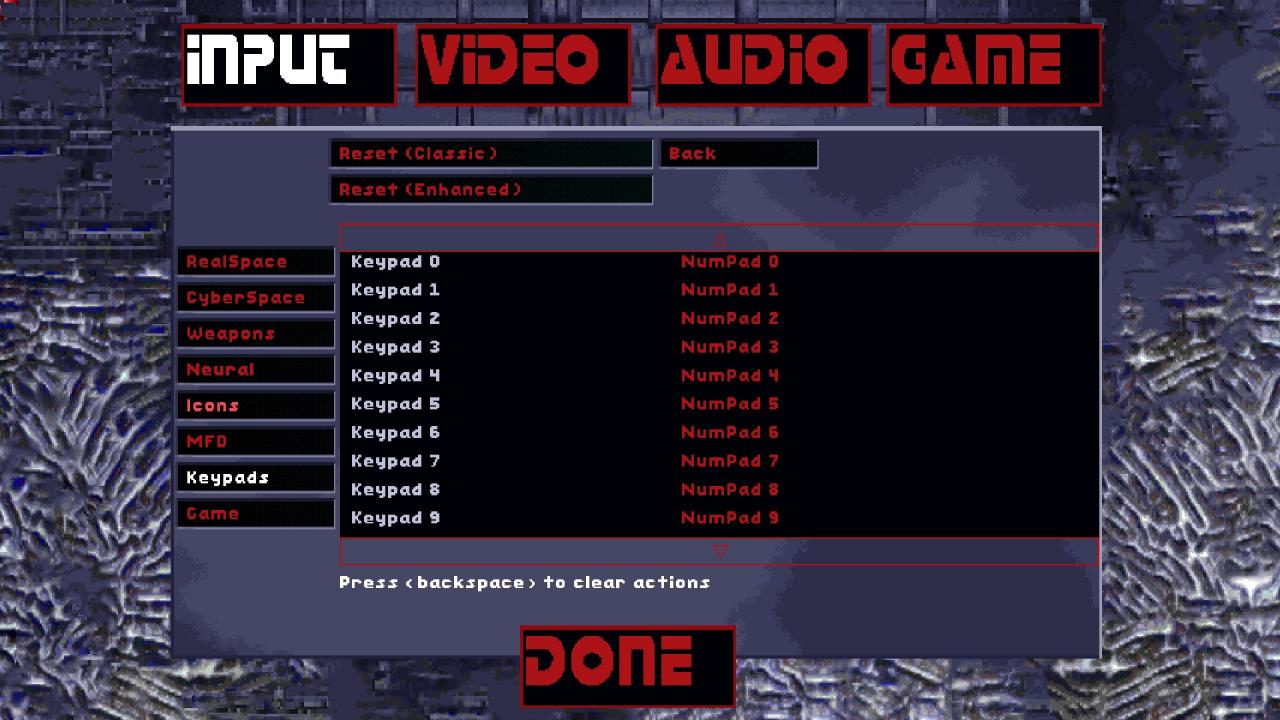 Defaults. If you have a numberpad you can put it to use for immersion, otherwise dont worry about it because you can use your mouse to click on screen buttons to do the same thing.
Game 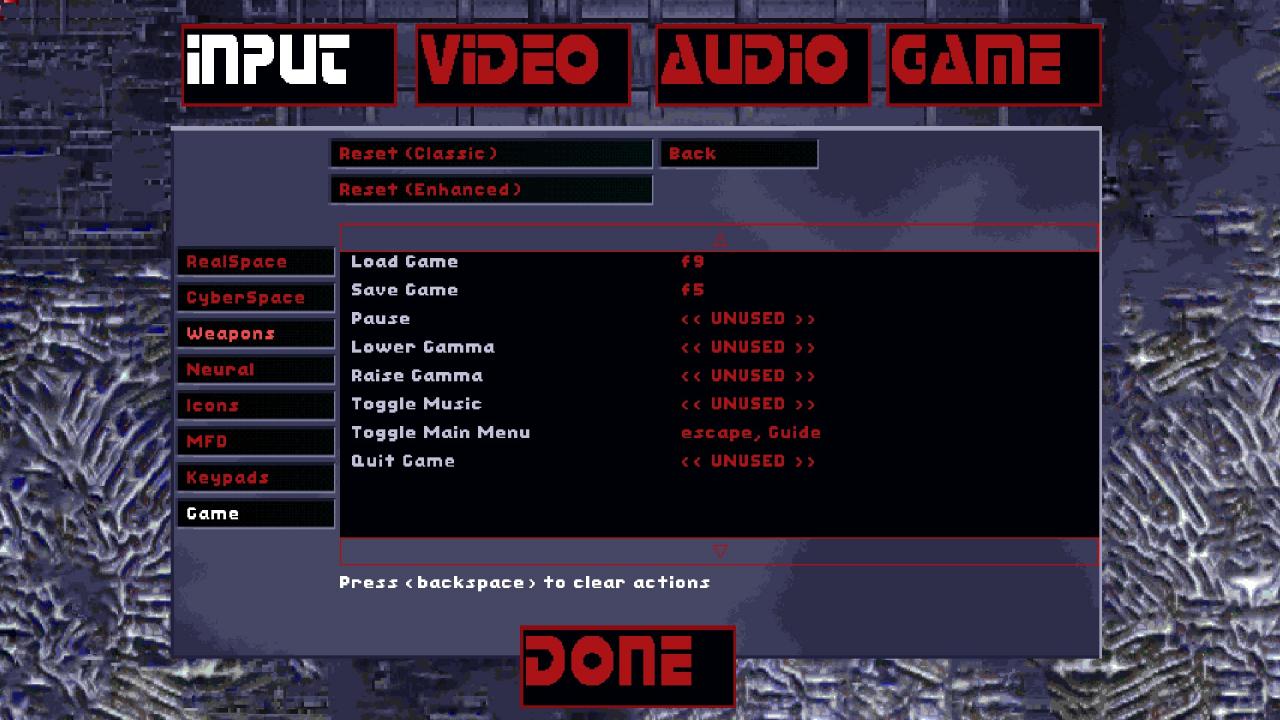 Load and Save game are f9 and f5 respectively. Lower and raise gamma are unbound so you wont change gamma while taking screenshots such as these.
By Pyao1wang