Maps of each level with all audio logs and notes marked and locations described. Also a list of all data objects and fragments, e-mails and v-mails, plus transcriptions of the notes and data fragments.

The first important thing to note is the Mission difficulty selection. All story elements, except data fragments, are absent at Mission difficulty 0 and there is one audio log that does not appear at difficulty 1. Difficulty 3, on the other hand, ends the game after 7 hours, which isn’t great for free exploration.

Therefore, it’s recommended to play at Mission difficulty 2, as it includes all story elements, but does not impose a 7 hour time limit.

The only other difficulty selection that matters is Cyberspace, setting it to 0 or 1 removes the auto-propulsion, making maneuvering generally easier, but at 0 none of the enemies attack and at 1 combat is made easier, so it might be less interesting.

These are the primary conveyors of the story behind what happened while the Hacker was in cryosleep. They are added to the LOGS tab in the Multimedia Data Reader (MDR). They are voiced, but also display text that can be shortened with the “Terse” setting for “Text Length” in game options. Neither text length actually matches the voices, though.

Throughout Citadel Station are scattered some notes on paper, rather than audio logs, that present additional background information. They can’t be picked up, so you’ll have to read them on the spot instead of being able to find a safe location to read them. They can also be destroyed by attacking them. I included transcriptions of these story elements at the end of the guide.

These are represented in Cyberspace as spinning pink blocks. They provide general information about Citadel Station and Cyberspace. They are added to the DATA tab in the MDR.

These are represented in Cyberspace as yellow squares with four orange diamonds at the corners. They give only the tiniest bits of insight into the story, but are not added to the MDR and are only readable in while in Cyberspace. I also included transcriptions of these short story elements at the end of the guide.

These voiced e-mails are sent to the Hacker throughout the game after completing certain tasks. They are accompanied by an audio cue and flashing visual notification and are added to the EMAIL tab in the MDR. Since they’re on the MDR, I figured I might as well include them, even though they’re automatically received and you can’t really miss them (though I have missed a few on playthroughs where I was speeding through). These are also affected by the text length option.

These are short video messages that are automatically displayed after completing certain tasks. They are added to the EMAIL tab in the MDR. Same as the emails, these can’t be missed, but they’re on the MDR so I’m including them. Despite being video mail, these do have accompanying text that is also affected by the text length option.

Why Transcriptions of Notes and Data Fragments?

Since they aren’t added to the MDR, I thought it’d be more convenient than running through the levels again to find one you may have missed. 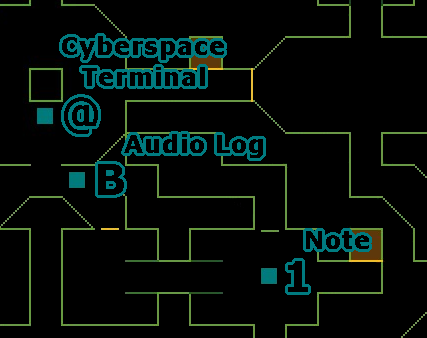 Each map has blue squares that denote points of interest. The letters directly to the right of those squares display the location of the audio logs, in the order they appear in the MDR. Some of the maps also have numbers that display the location of paper notes, in no particular order. If there is a data object or data fragment in Cyberspace, the Terminals those elements are located in are displayed on the map with “@” or “#“.

Each map will also be accompanied by an index of the audio log titles as shown in the MDR to make it easier to find any specific log, as well as text descriptions of the location. Finally, Cyberspace is divided into a linear set of rooms and connecting data currents that automatically propel you through them, so any data objects or fragments will be listed with the terminal and room number they are in. 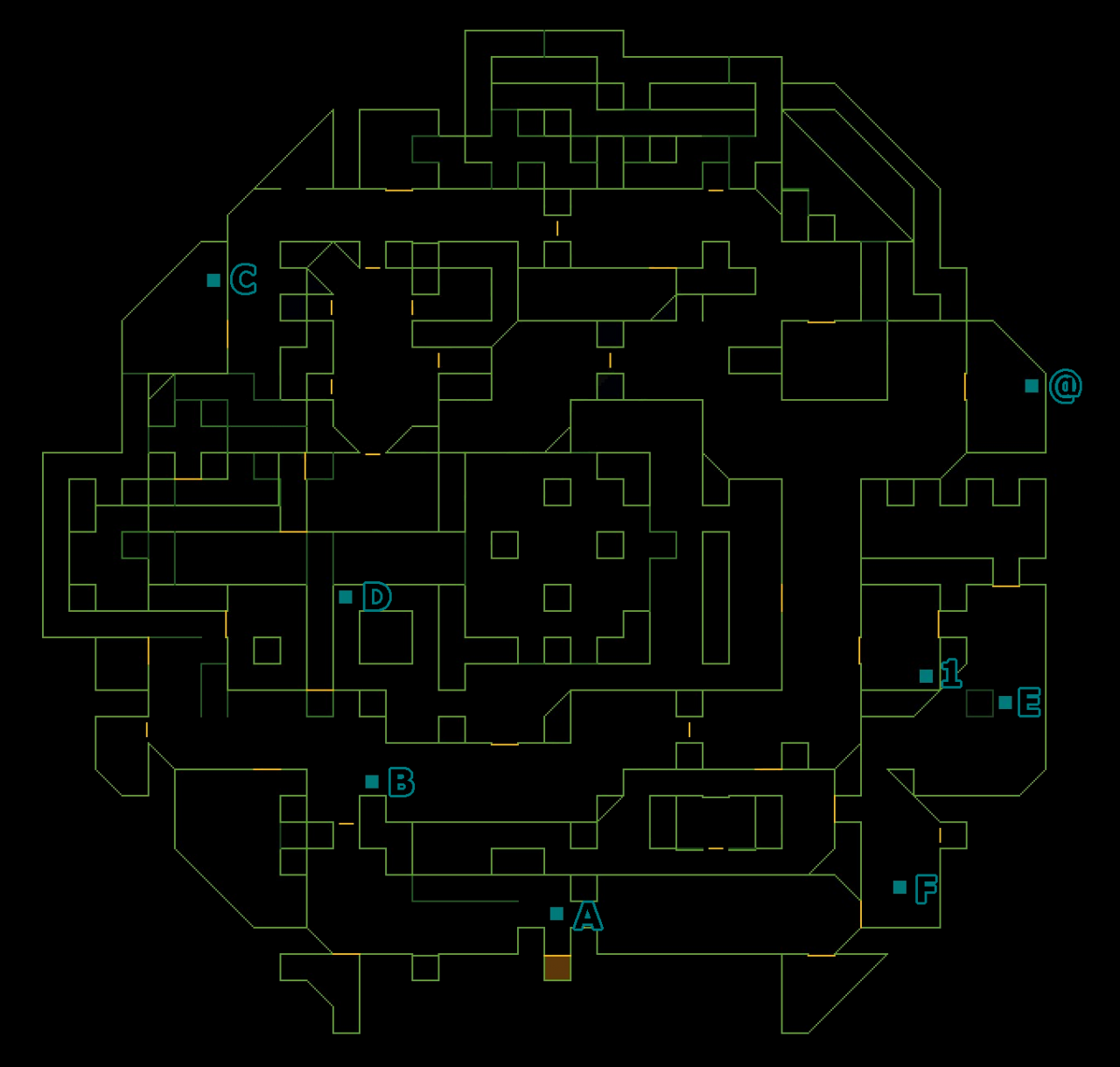 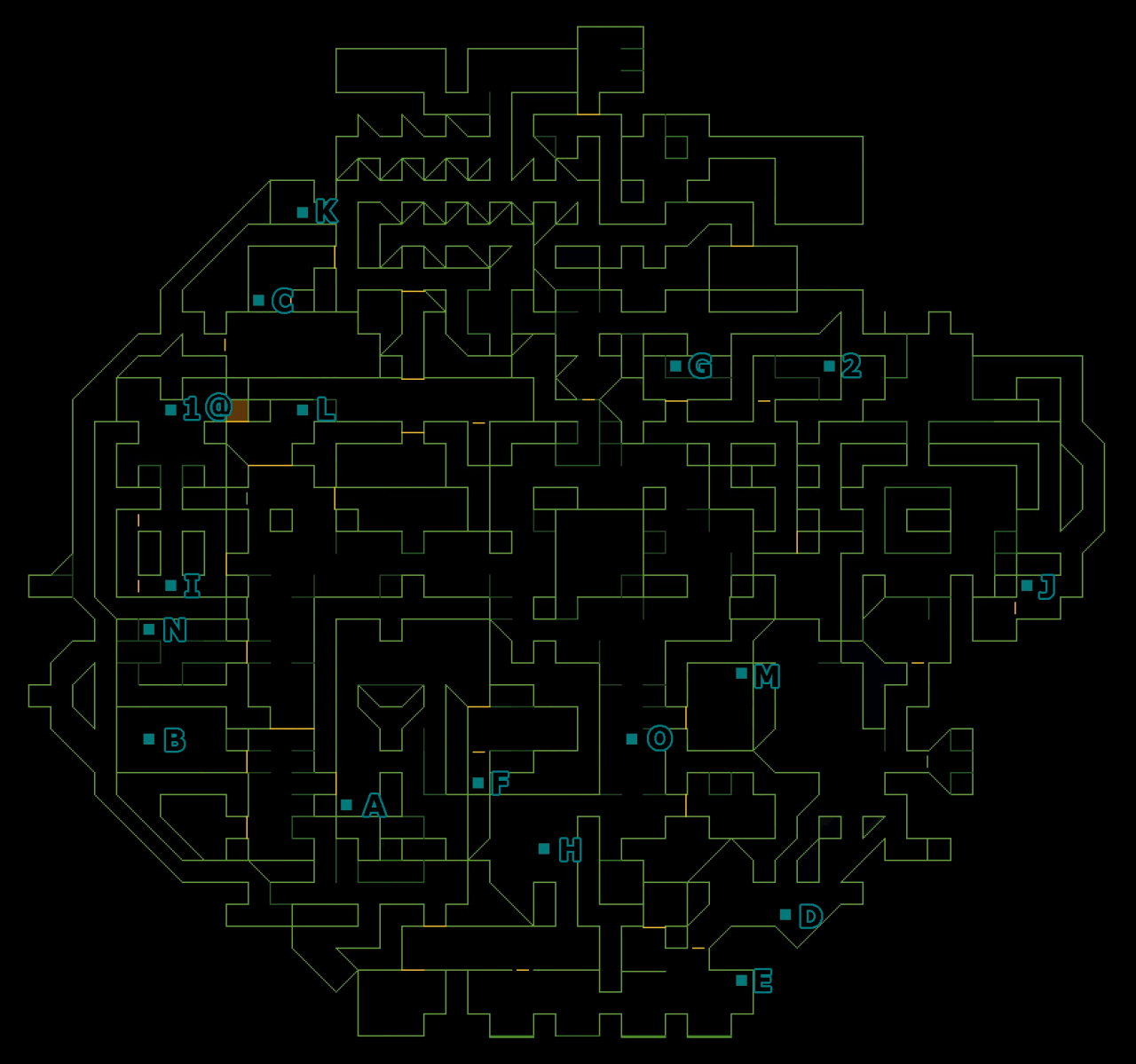 1: Engineer’s Report – Sitting right under the Cyberspace Terminal.
2: Medical Report – On a counter in the room in the corner of the upper level after taking the lift in the hub. 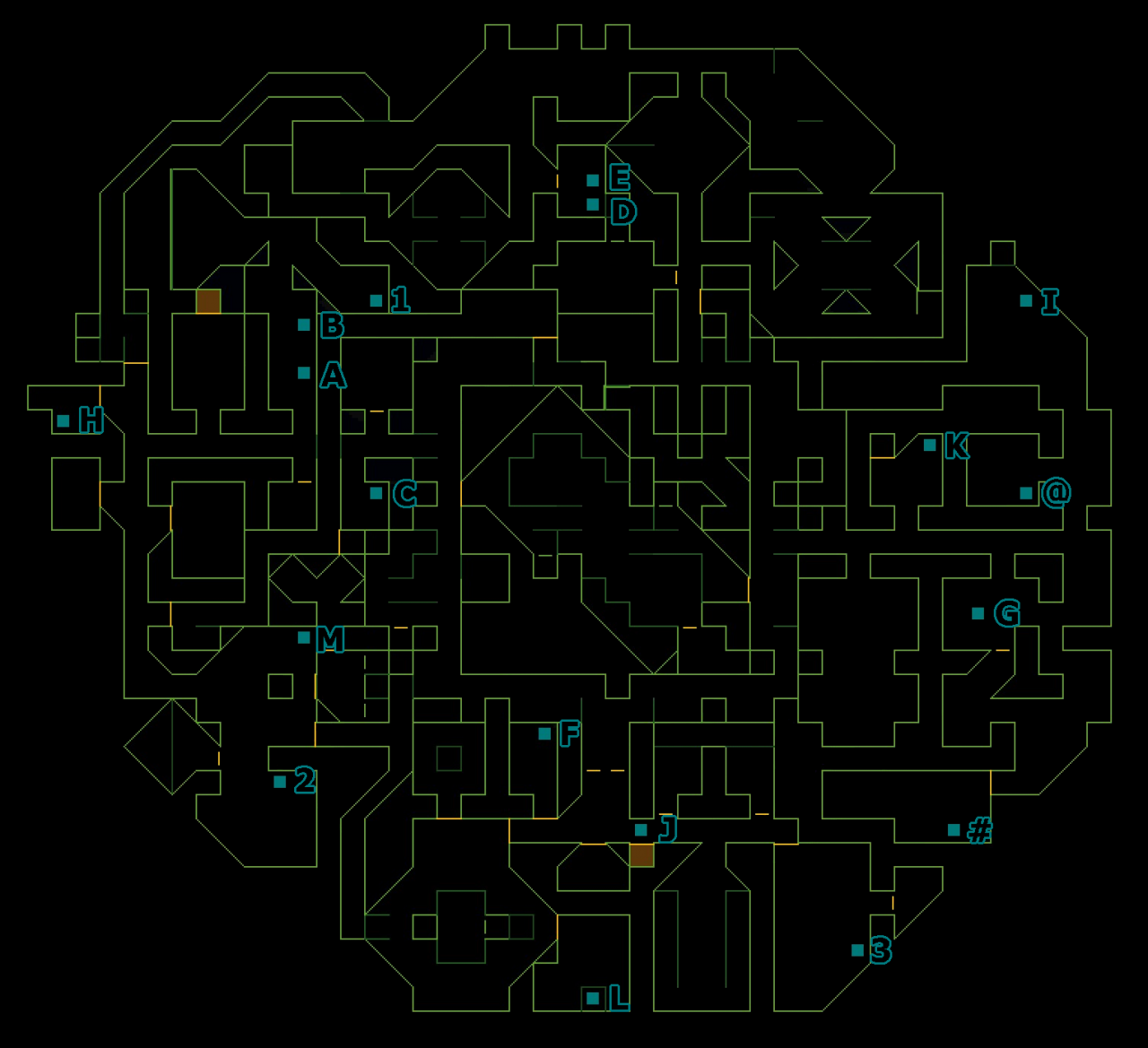 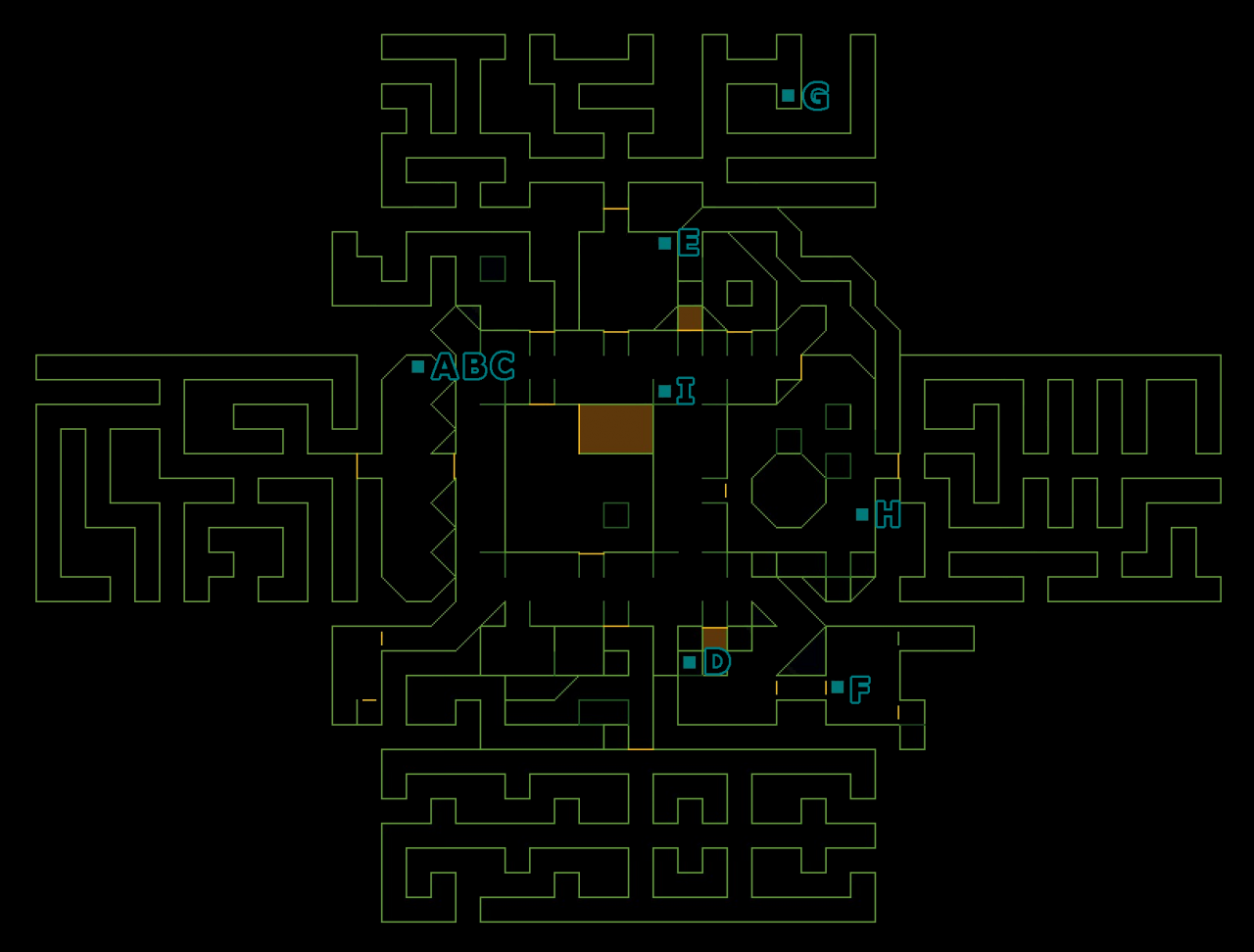 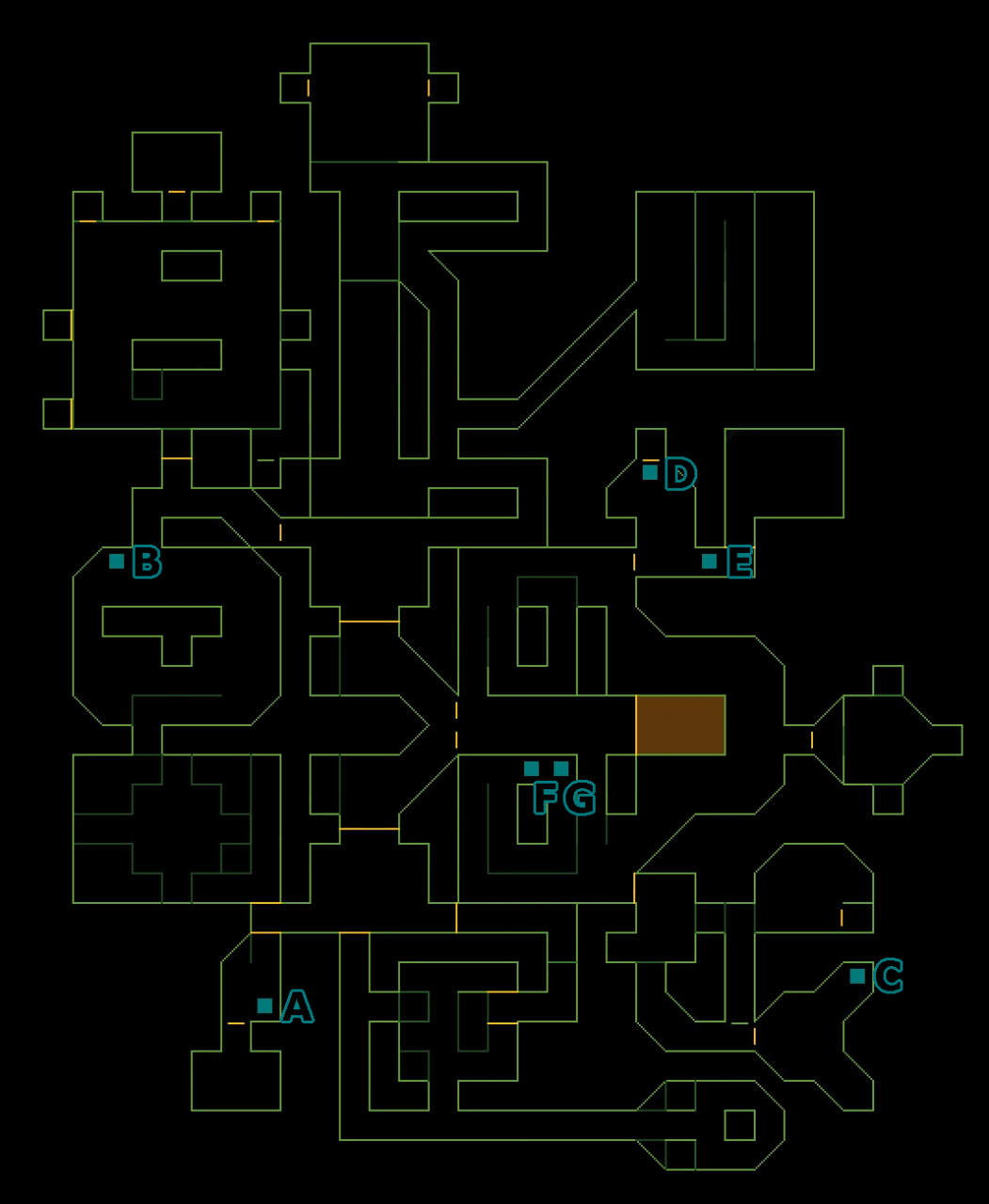 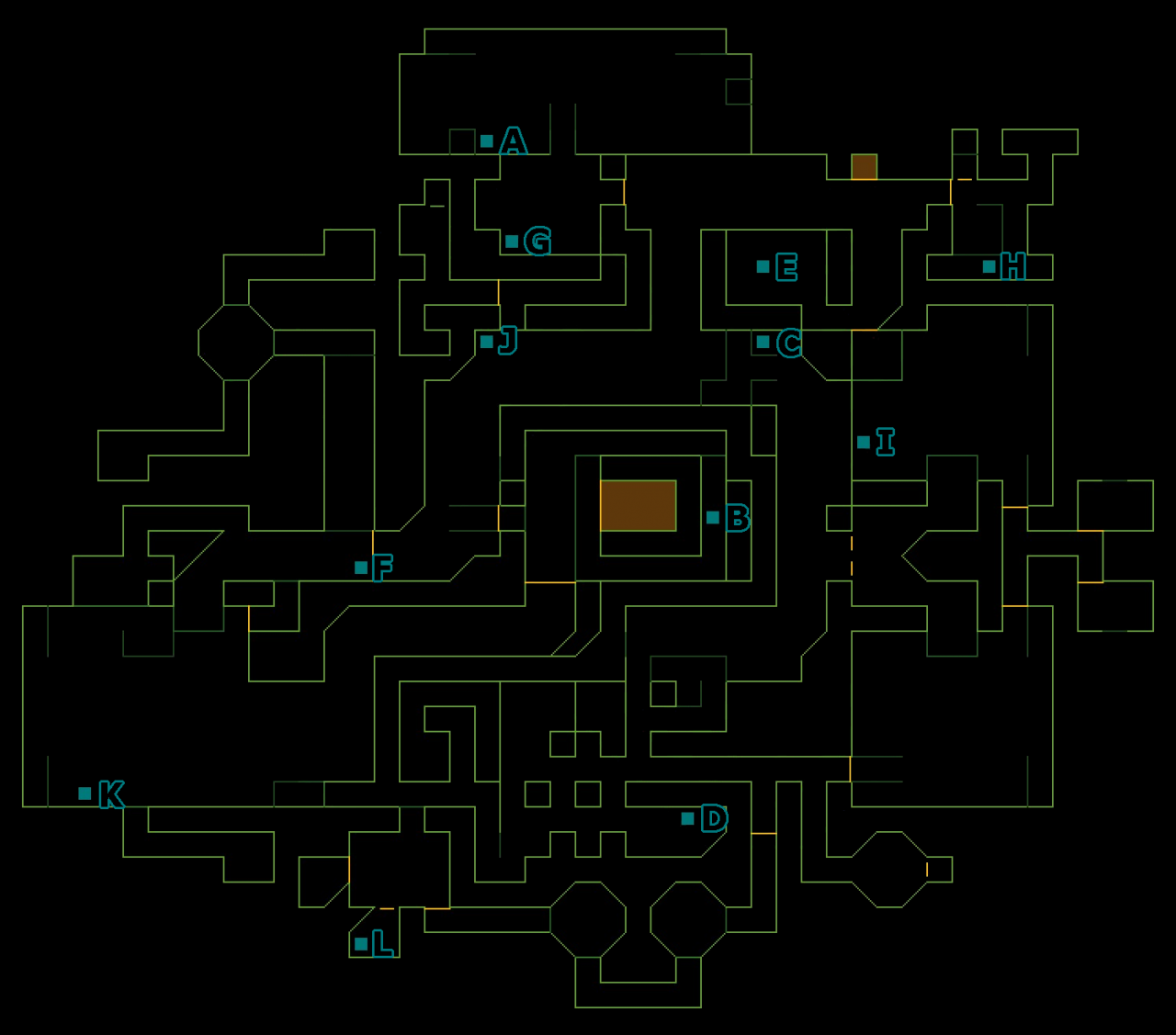 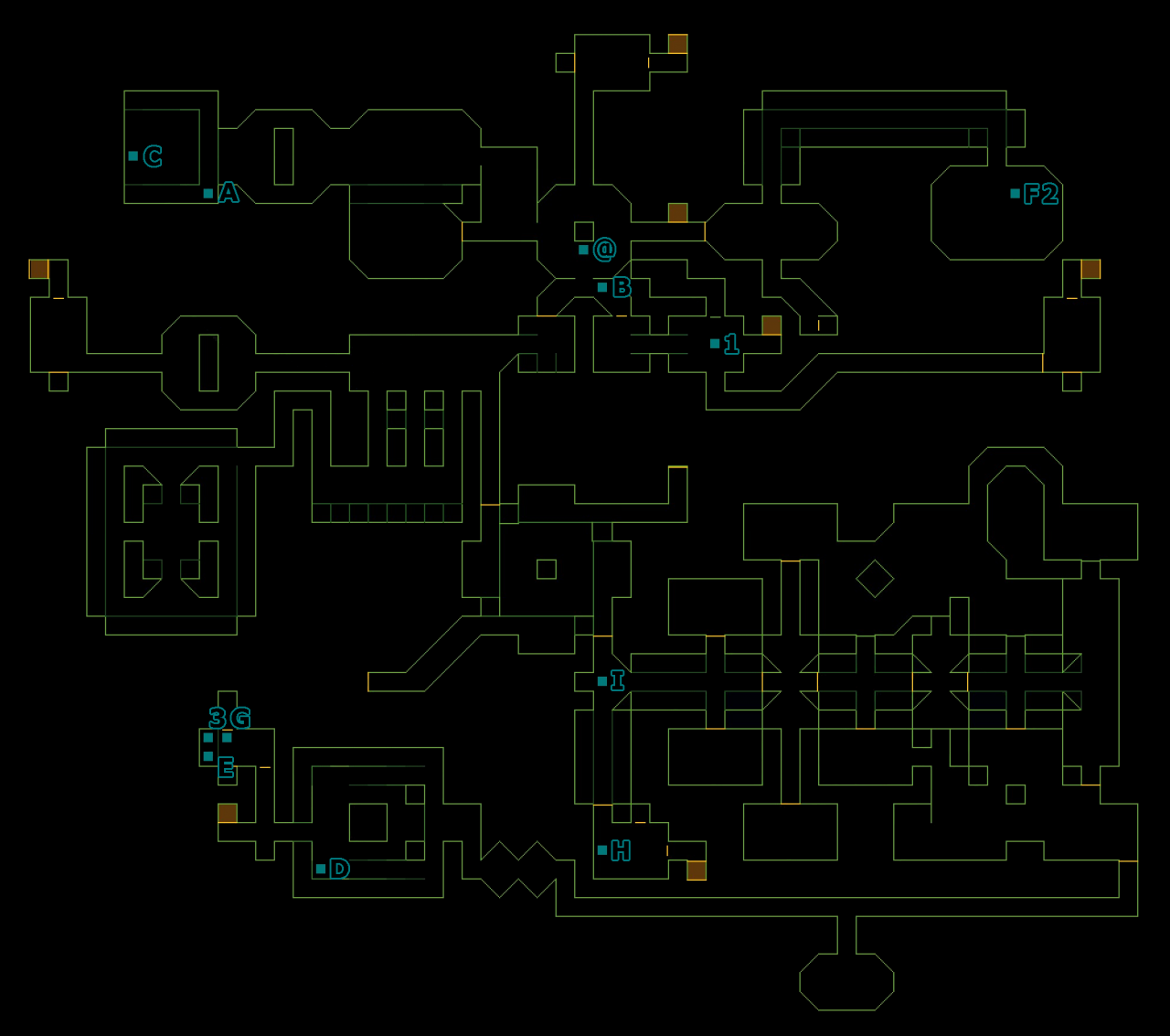 1: Eco-Pods Advertisement – Under the camera shielded by a green force field next to the central elevator.
2: Trioptimum Security Report – In a large room past the white hallway near the executive elevator.
3: To: Edward Diego – Just outside Diego’s storage closet.

1: Room 3 (Terminal @) (This fragment is after a split in the path. If you ease up on the controls, the game will automatically straighten you out so that there is a left and right path, the room this fragment is in is to the right [the green one]) 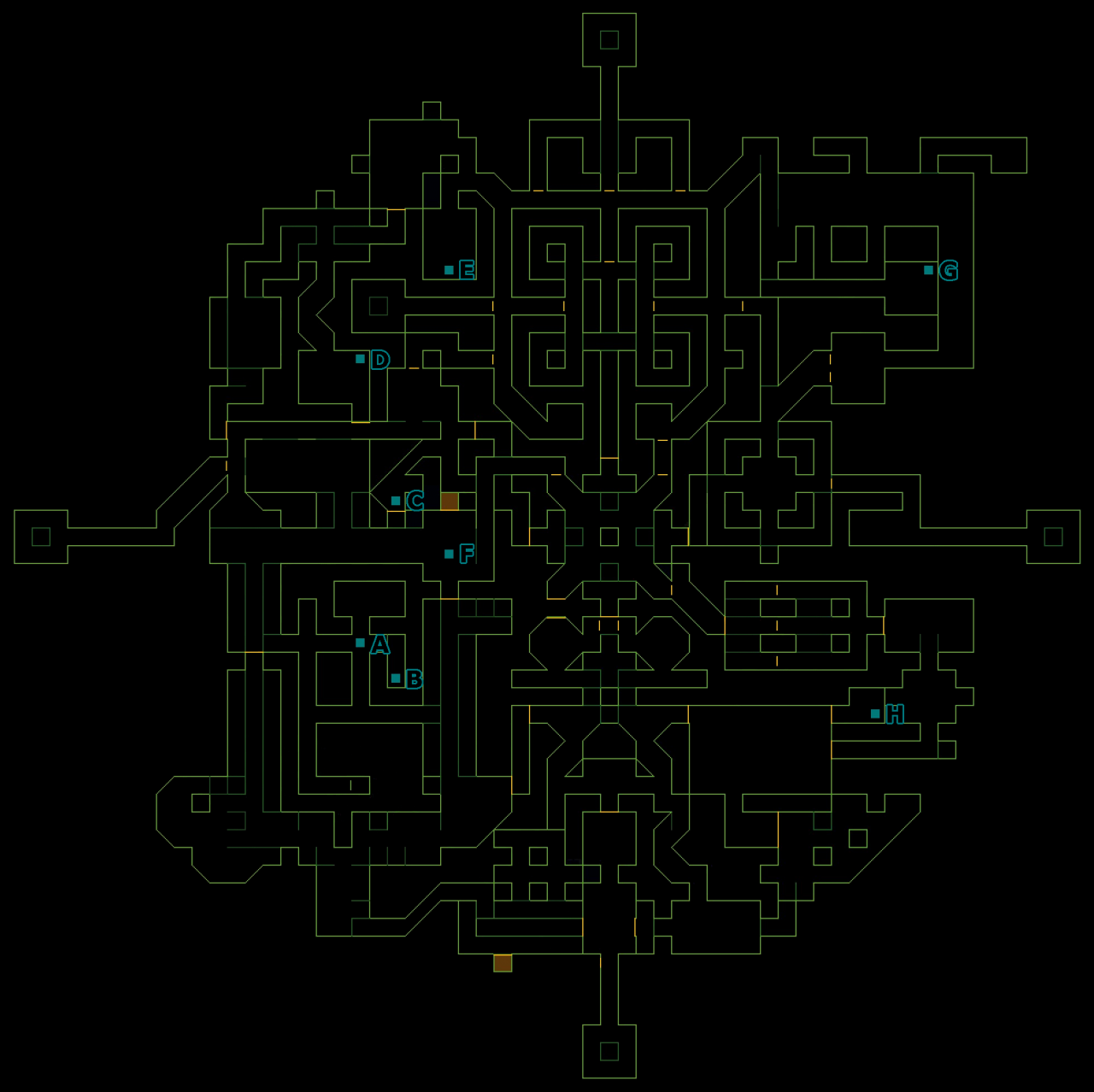 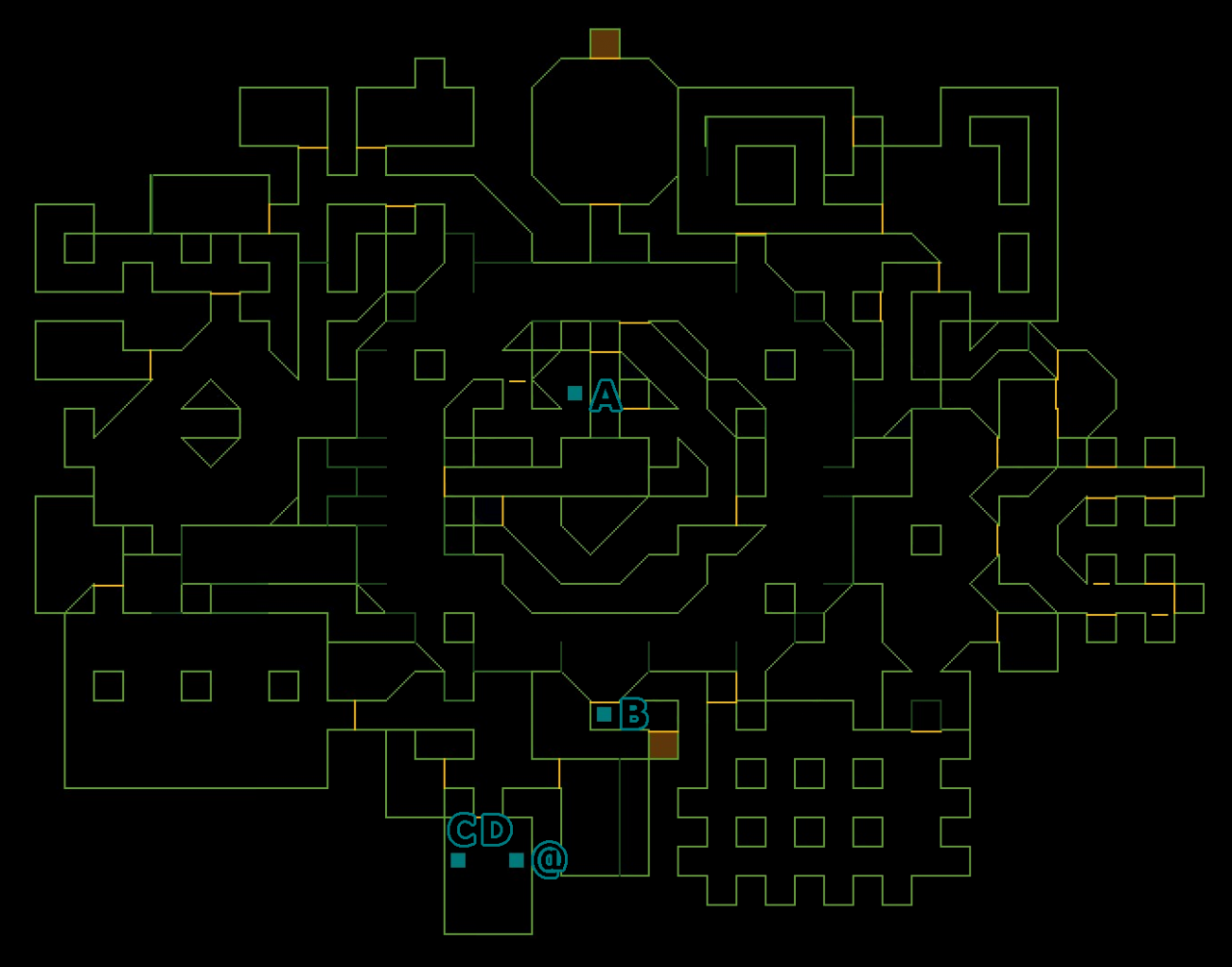 SHODAN-06.NOV72
SHODAN-23
Rebecca-3
SHODAN-08
Rebecca-4
Rebecca-7
SHODAN-38
Edward Diego-A
Rebecca-5
Rebecca-6
Brocail 1
Taggert 1
SHODAN-2
Parovski-1
Parovski-2
Rebecca-2
SHODAN-87
Rebecca-1
Earth Destruction (You only get this Email if you activate the Laser Control without the Radiation Shields active and then the game will end)

Transcriptions of Notes and Data Fragments

1
Citadel Station boasts one of the highest Security Ratings in known space. Against invasion, it is armed with a battery of DEX-38 missiles, 8 short-range argon-suspension lasers, and the state-of-the-art Tachyon Laser Mining Beam that can easily be modified for military use. On the inside, over 200 security guards are armed with sparq-beams, Triop Minipistols, and Flechettes. Guards in especially sensitive areas are issued Skorpion guns. The armories are also stocked with Mag-Pulse guns in the event that invaders employ Powered Battle Armor. Lastly, work is being done currently on the Plasma Rifle, which, when fully designed, will be the most powerful hand-weapon in existence today.

1
Engineer’s Report — Arnold Hessman 22.SEP.72
As I feared, SHODAN’s malfunctions are manifesting in Citadel’s cyberspace net. Several storage lockers and rooms have been sealed, with their controls put on ‘cybertoggles’ only accessible in cyberspace. Also, some codes to sensitive areas on the station have been encoded onto loose data fragments. Although all station personnel capable of entering cyberspace have clearance for those codes, I’m very concerned about the potential security hazard. I’ll try to have SHODAN introduce defensive programs into cyberspace, to keep potential intruders from the floating data and cybertoggles.

2
Medical Report — Aaron Talbot 29.SEP.2072
Another four cases of the ‘mystery virus’ were reported today. There have been increasing rumors that this whole mess is the result of a screw-up in the experimental bio-labs. If it’s true, then why the hell aren’t they telling us anything that could help us cure the victims? My first patient, who came in two days ago, is starting to display unsettling physical deformities. Furthermore, he is not responding to any conventional treatment. I’ll consult with Dr. Stackhouse tomorrow — I know she has two patients in a similar condition.

1
Engineer’s Report — Jon David Wong 17.SEP.72
Note to all science level engineers: I am still unable to pinpoint the source of the power surges in Beta Quadrant, though they are likely related to some of the other recent glitches in SHODAN’s operation. At Mr. Endicott’s request, I have installed circuit breakers in Alpha Quadrant in case of power outages in Beta.

2
Negotiations continue to go well with the United Earth Miners’ Conglomerate over rights to Saturn’s moons. Trioptimum is uniquely positioned to make a deal, since Citadel Station is already in stable orbit, and has the scientific equipment necessary for preliminary surveys. Profit projections, assuming a 30% stake in UEM’s local mining activities (the standard rate for such deals), are very promising. Our lawyers are researching the legality of imposing a 4% shipping tax, since Trioptimum technically has first rights to space shipping lanes in the Saturn sector.

1
Trioptimum knows that life aboard Citadel Station can be stressful at times. If you find yourself feeling worn out after a hard day at work, we invite you to visit the Citadel Eco-Pods, more casually known as the ‘Groves.’ The Groves are simulated outdoor environments, complete with grassy hills, authentic Earth flora, and harmless woodland animals. A relaxing walk in a Grove can be just the thing after a tiring Security shift or all-nighter in Engineering. You’ll emerge refreshed and ready for another productive day!

2
Trioptimum Security Report — 10.oct.2072
The rioting on the residential level has not calmed down since it started yesterday morning. A security team was dispatched 12 hours ago, but met with unexpectedly strong resistance from the rioters. Some of the members of the security team claimed that the mob had broken into weapons lockers and had armed themselves. Worse were the reports that some of the rioters were already engaged in skirmishes against ‘oddly formed beings.’ There is no evidence to back up these reports, though their coincidence with the reported biolab fiasco two weeks ago is troubling.

3
To: Edward Diego, Vice President
From: Rex Melville, technician
As per your authorization order from SHODAN, we have completed installation of an ETU (Experimental Teleportation Unit) in your new quarters. Its second terminus is located near the elevator to the maintenance level. Activation of the ETU is triggered by any object of sufficient weight (50 kilgrams). Be advised that the ETU is still in its testing stages. SHODAN’s authorization was not backed by any research personnel, and we urge extreme caution when using the device.