Lost in the woods? Worry not. 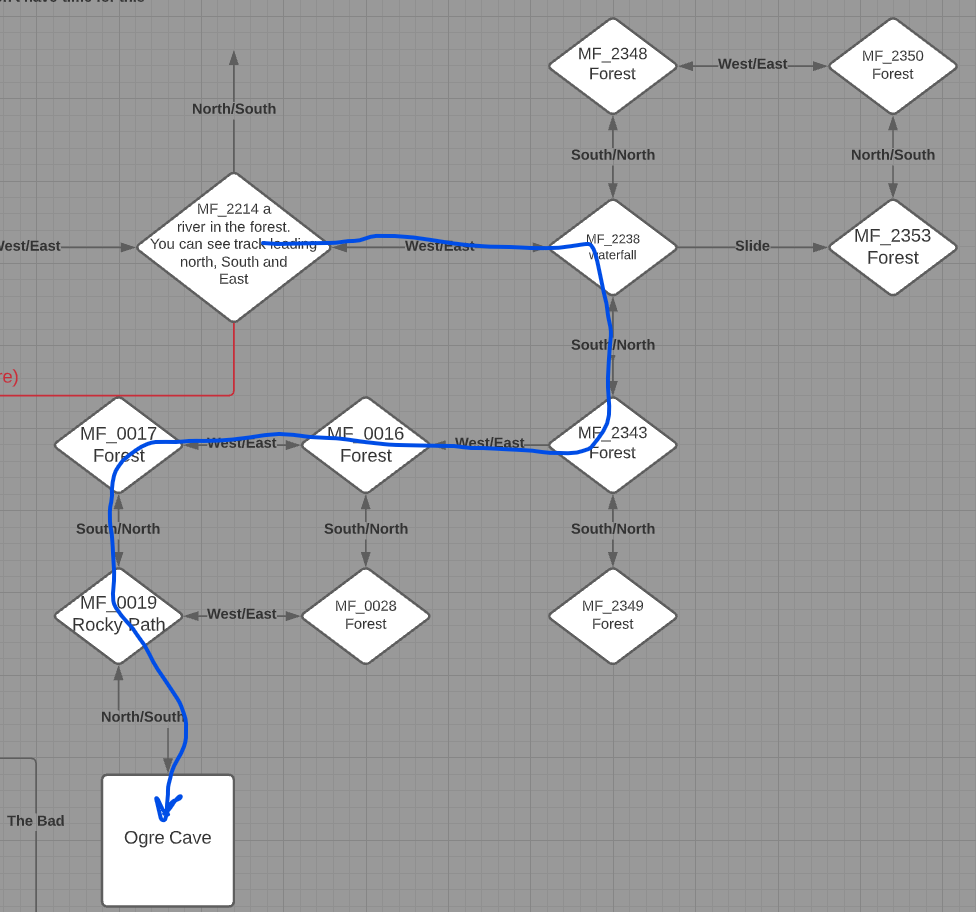 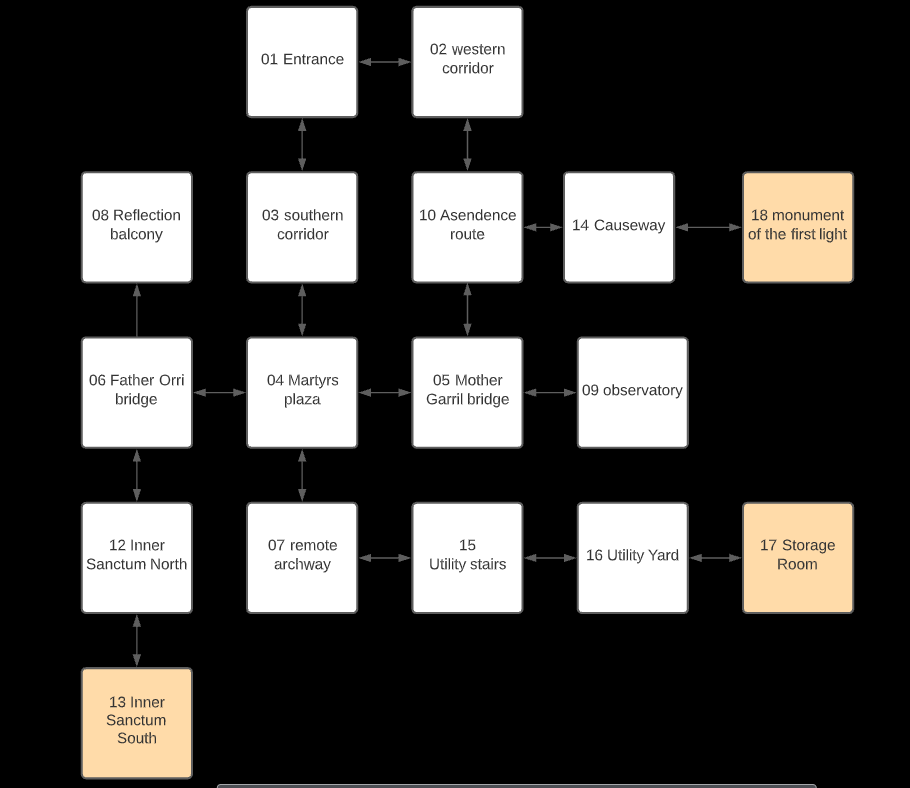 The goal in the Marbia miniquest is to get a hold of the gold of Fahda, the rich moneylender and de-facto ruler of the oasis. In order to do so (and reach the showdown scene with Fahda) three conditions must be met.

Beasts of burden – Gamdoo the Gamali driver hates lady Fahda and will assist you but he will not leave the oasis without his sister Arzu who went missing in the caves north of the oasis. The caves will be available to visit after you talk to him in the Stables.

Arzu can be found in the north-east part of the caves (top right) being relentlessly fucked by a group of goblins. When you see them you have two options:

If you don’t attack the goblins you’ll see a goblin gang bang unfolds, after which you can persuade Arzu to come with you peacefully.

Sleeping potion – Madj the orc will help you by making a sleeping potion for lady Fahda but you’ll need to learn what she drinks first, and that will only happen on the second night you are invited for dinner on her roof. Once you know what she drinks head back to the coffee house and tell that to Madj. He will instruct you to collect three Skyflowers for him. 2 can be found in the goblin caves and the third grows right outside Fahda’s mansion. Collect all three and bring them to Madj the orc in the coffee house. 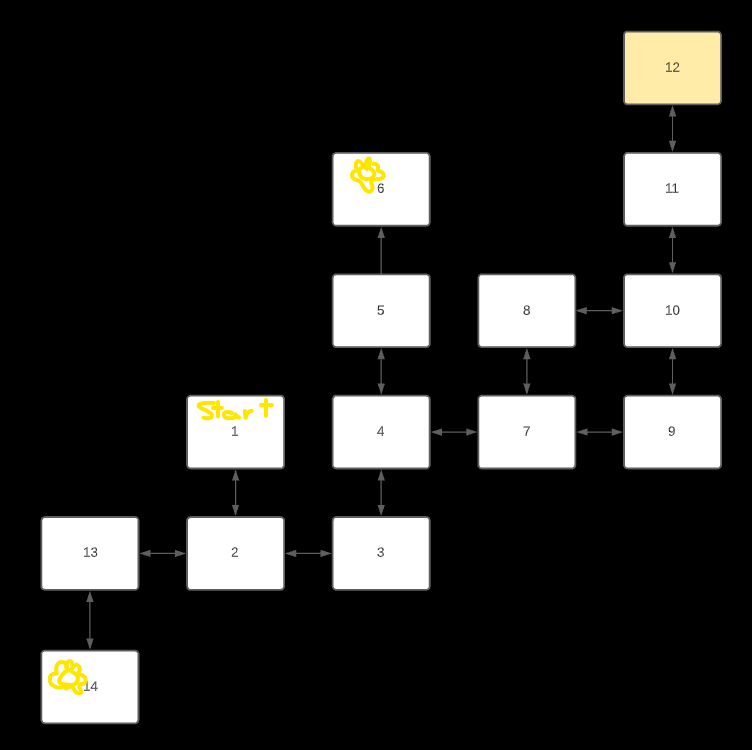 Fahda’s Mansion can only be accessed after you have visited the Traders Post and learned what a good trading route consists of. A route consists of wares to purchase, location to buy them at and location to sell them at. If you can’t memorise, remember that each buy/sale towns starts with a unique letter so you don’t need to remember the full name, only the first letter of the town.

If you manage to impress Fahda with your knowledge as a trader you’ll be invited to her mansion to have dinner with her, Alam her daughter and Domia the captain of the guard. In order to reach the end of the quest you must meet with any of the aforementioned for three nights, have a potion ready and Gamdoo will to help with the caravan.

Alam’s flow is very straightforward with minimal changes between the flow, sex wise. You can either choose a more gallant approach and seduce her, appealing to her adventurous heart or you can belittle and grind her self esteem until she submits. The choice is mostly a moral one, which option appeals to you more.

Domia’s flows, on the other hand, are somewhat more complex. The more gallant flow would be to appeal to her warrior side and convince her to leave the boring oasis and join your army. If you choose this flow eventually you’ll have to dominate her in mock combat. Domia is tough but she will always attack: Riposte – Riposte – Slash – Slash – Parry – Parry. Beat her and you’ll have a nice sex scene on the roof and her flow is completed.

Domia’s other flow is focused on feeding her grudge against lady Fahda and Alam until she is ready to help you rob them and run off. Note that you will not be able to fulfill her 3d night unless you already have the potion and Gamdoo’s help. Once you do, Domia wants to go and ravish Alam. You may join her (for a long two on one ravish scene), tell her to go without you or prevent her in ravishing Alam. The choices are moral here, although on the first option (join her) has a sex scene. Important: if you rape Alam with her, you will not be able to revisit Fahda later and offer her the position of governor of Marbia (introduced in update 0.4).

Once you reach the 3rd evening with either Alam or Domia (or both), have the potion and Gamdoo’s help you’ll meet with Fahda for the final scene in the mansion.

When you reach Fahda’s final scene you can make one of two important decisions: Confess and ask for a loan or proceed with the original plan of drugging her.

Revealing your true identity is a more gallant choice. Lady Fahda will agree to lend you 45 gold but you will have to repay the loan by paying back 1 gold in the next 50 turns. If you agree you essentially end the miniquest but before that you’ll have to decide who you would like to take with you, Alam or Domia.

Proceeding with the original plan of drugging lady Fahda is a bastardly choice, of course. If you do that you’ll have the option to ravish the unconscious Fahda or not. Important: if you rape her, you will not be able to revisit her later and offer her the position of governor of Marbia (introduced in update 0.4). Once you’re done you’ll be taken automatically to the Vault end game.

If you pursued Domia’s “grudge” flow, the game will essentially end. However, if you opted for the warrior route, Domia will not allow you to rob lady Fahda completely and forbid you from taking more than 20 gold. You can either agree and the miniquest will end with you being 20 gold richer or fight her (Riposte – Riposte – Slash – Slash – Parry – Parry). Killing her will end the miniquest with being 90 gold richer but if you opt to subdue her, you can ravish her after you beat her. Either way you’ll end the miniquest with 90 gold. Important: if you kill Domia, you will not be able to revisit Fahda later and offer her the position of governor of Marbia (introduced in update 0.4).

𐄂 Alam in the crypt (Seduction/Submission are very similar scenes)

Shortly after your meeting with your elfkin contact, you are assaulted by constables. You leave them in a bloody mess but the elfkin is taken. Your goal in this miniquest is to set her free.

In the first night and second morning there are no puzzles or challenges but you will have to decide how you want to act towards Mirina and Alax. Paying 1 gold for their expenses does nothing except (hopefully) make you feel good.

In the second morning you will go with Alax to survey the caves. You have to find the entrance to the Fort and the docks, however a band of thieves won’t let you get to the docks until you get rid of a bunch of goblins in the Blue Caves. The condition for ending the day is finding the fort (25 in the map below) and finding the brigands (19). You start in square 13.

Return home and progress your story with Mirina and/or her son. 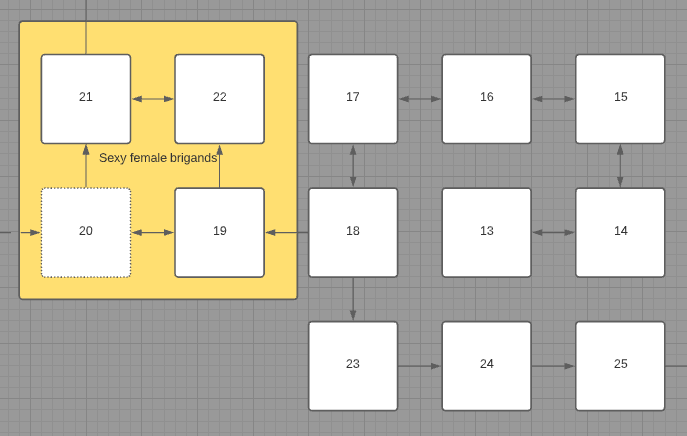 On the third morning it’s time to get your hands dirty. Via square 20 you enter another section in the caves and find the goblins (square 6). The Thicc Azz Thieves wanted you to kill the goblins but Zybs the goblin will beg to differ and explain that the brigands are not a very pleasant bunch.

If you kill the goblins, you can head back to the brigands and get your reward: a route to the docks. Oh, and some elfkin pussy. You see: the brigands are pious Wakabians and will not fuck you willingly. However, you can side with the gobbos and together overcome the brigands. If you choose to keep all the pussy to yourself the goblins will half-ass the fight, forcing you to fight harder. You can choose to keep only the leader to yourself and let the greenskins have their way with the other brigands, resulting in an easier fight. Either way, you found the way to the docks. 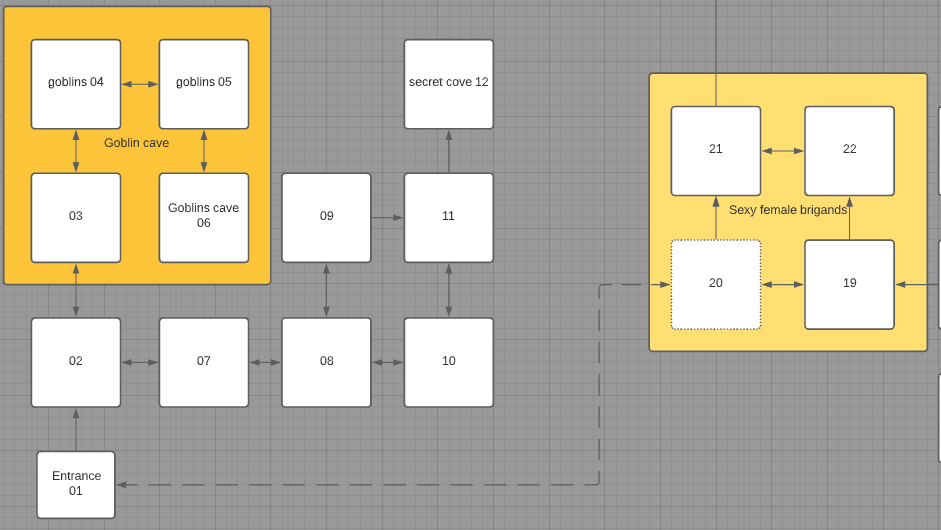 Now you have to watch three posts in the jail yard and find the exact time all guards are gone. It’s very easy: just hit the hourglass and note the guards are off. Do this for all three locations and you’ll find a single time slot when all of the guards are in a briefing. Note that time. In the example below, the time slot is 10. 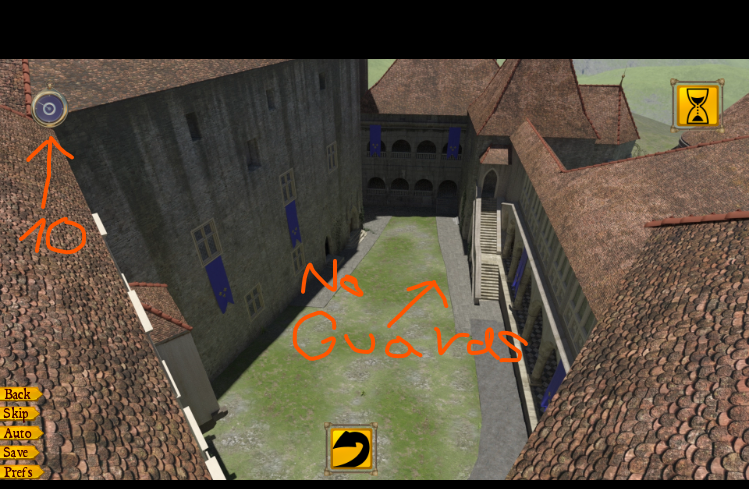 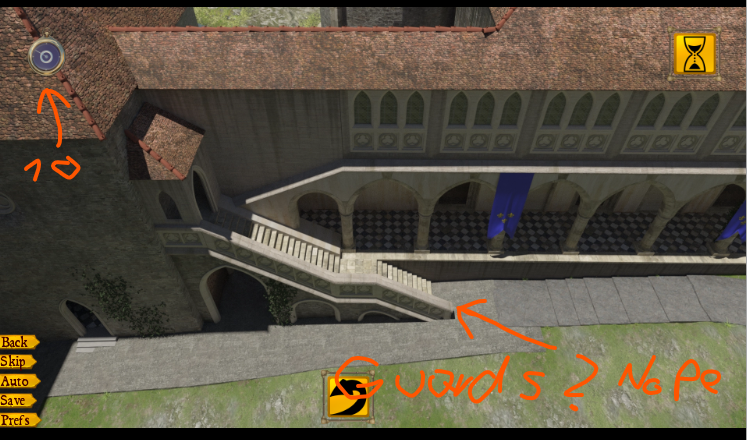 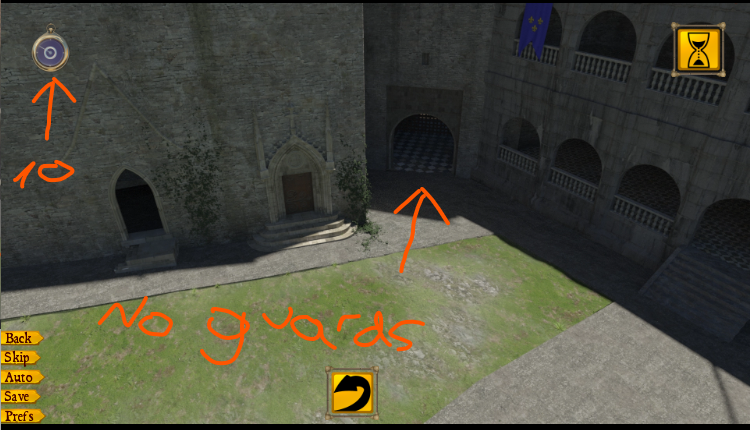 After you visit all three observation locations (chapel, tree and old tower) and finish the goblins/brigands quest, you can return to Mirina’s house for the final night.

Showdown. Head towards the caves and go to the entrance to the fort (square 25). You will have to enter at the exact time using the hourglass (10 in the examples above) and make your way to the cells. A little violence later you will have to choose: go find Gaal’s hound (and watch a bestiality scene later) or leave the doggo and “comfort” Gaal yourself later.

When you’re back in the caves (25) make your way towards the docks (north of location 21). After you spend some time waiting for Izmy, she arrives, telling you the docks are filled with constables and that you have to find your way to a secret cove where a sloop is waiting for you. The entrance to the cove is at location 12. Go there and watch the steamy end of your adventure.

𐄂 Alam seduction in the palace

𐄂 Alam abuse in the palace

In this quest you’ll need to sway the Hawatian elections towards a result favorable to you. It consists of three flows, but you only need to finish two of them. This quest is composed of three days, where every day you may perform one act of the following flows. The game will not allow you to end the day if you didn’t make progress in at least two flows.

When you first visit it you’ll realize there are too many orcs about. Go see Yuki to see if she has an idea, then go to the camp again. Yuki will tell where the body is buried. Memorize or write it down.

When you have at least 2 votes secured, click the hourglass icon and the quest will end, leaving Hawatia weaker by 20 troops for 20 turns, after which the bonus is lost.

𐄂 Jenna at the arena

𐄂 Gleeful (she orc) at the arena

This update is different from the previous ones as it focuses on the stories of the four ruling Wenches you have conquered. Other than Teniya’s, they are all very straight forward, the only thing you need to know is how to trigger them.

Once an act 2 condition is met, you’ll see a red compass on the top left section of the world map. Click it. The acts play little differently if the Wench starts them in the Dungeon or the Palace, except Sumia’s act which starts completely differently.

Teniya’s act contains an abandoned jail with levers and corresponding gates. Switching a level changes the condition of all gates of the same color (brass/iron). The only “trick” is after you visit room 8, you will not be able to visit room 11 until you pull the room 5 lever again, which opens the gate between 9 and 11. The rest are easy enough. 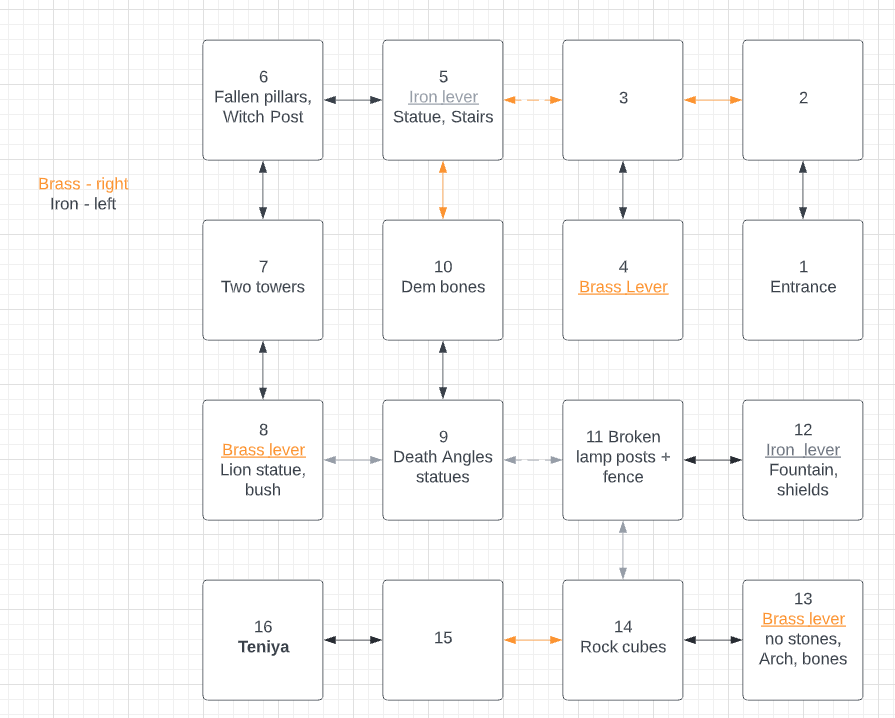 𐄂 Cake by the Lake (sex by the lake)

In this adventure, there are no mazes and it is mostly straightforward. Two points to note:

On day 2 choose any of the stores and start looking for books from the trilogy. When you find one, take it. When you have all three, return to the seller with Elfkin Architecture – essays by Fornard (you don’t have to remember, they will) who will give you the book. Find the seller who has The 676 Trials and Triumphs of Gojira (again, you don’t have to remember who) and the quest is complete, you may now blackmail Tana’Dur into revealing the location of the Grey Book.

You can also visit the author’s Subscribestar or Patreon to get the new information.