What is the secret weapon?

You can make your own secret weapon.
Go to the menu and find the option “Create weapon”.
After you create it, you have to give the weapon to a team.
When you play a game with that team, you will have that secret weapon.
Inside a game, when you open the weapons that you have, you will find your secret weapon there. The secret weapon has this image in the menu of weapons: 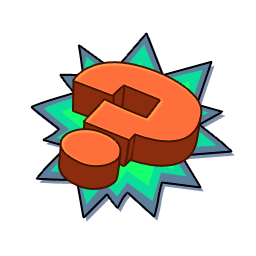 What do the settings mean?

Improved shot (setting available only for guns) = If you want to charge up your shot before you fire it, similarly to the bazooka (leave it on “yes”), or if you want the missile to fire as soon as you press Clic (leave it on “no”).
Maximum throw strenght = How far the bullet can go.
Affected by wind = If the wind can curve your bullets (leaving it on “yes”) or not (leaving it on “no”).

Standard homing (setting available only for guns) = The bullet will stop 2 seconds after you shoot, and it will curve towards your target instantly, and begin to move towards that destination.
Advanced homing (setting available only for guns) = The sane as Standard Homing, but if the bullet is about to hit a wall, it will dodge it, until it reaches the objective that you mark.

Venom = If the bullet has venom. Venom takes -10 life points to worms every turn.
Land damage = How big is the hole that the bullet leaves.
Worm damage = How much damage points it causes to worms.
Blast strenght = How far the worms are pushed away.

Amount of bombs (setting only available for air strikes) = How many missiles will the helicopter shoot. More missiles = weaker missiles.

Strenght of some settings

Generally, the damage that your weapon makes is = points of worm damage x 7,5 rounded down.
Grenades, however, in general deal 1 to 3 extra damage points more than guns.

About worm damage
When you hit yourself with a custom grenade that has 0 bars of worm damage, you still have rime to retreat.

About blast damage
3 points of blast strenght are enough to cause sentries to attack a worm that you hit directly.

About teleguiding
When creating a teleguided gun, you do not need to spend any points on throw power, it shoots at the same power no matter what you choose.
You have 0 seconds to move after you launch a gun with common teleguide, but you can move normally if the gun has advanced teleguiding.

Powerful air strike:
Make an air strike. Leave the setting of wind affected NO and detonation type impact. Simply make the blast strenght 10 points (maximum blast strenght) and do whatever you want with the rest of the configurations. Congratulations, you have one of the most powerful possible forms of the air strike.

Simple, teleguided, strong gun:
Make a gun. Set homing to yes and advanced homing to yes. Set maximum throw strenght to 0. Set damage to 10 (maximum damage). Do whatever you want with the rest of the configurations.

Hole digger:
Some random maps (prehistoric, construction maps) have a very low ground; so low that the explosions cause small pools, with water from the sea, due to its its almost equal altitude. If you play on one of these maps and you see a worm standing on the ground, shoot this weapon at him and he will fall below the terrain and drown on a pool.
To create a pool digger, spend 10 bars on land damage but 0 bars on blast strenght, and opcionally give it 1 cluster with 0 or 1 bars on propagation/spread and 10 bars on cluster terrain damage; this cluster would make the hole below deeper in case that the big one is not enough.

Suicidal weapons:
Choose one of your worms with low health and shoot this weapon on your feet while your worm is on the head of the enemy worm. The enemy worm will take the damage of the weapon and the damage from your worm’s explosive death. This can sum a max of 140 damage points.
To create a suicidal weapon, spend 10 bars on worm damage, but 0 bars on blast strenght, so your worm dies above the enemy. If the weapon is a grenade, set the explosion type to Impact.

How to dodge enemy team weapons

Enemy has an air strike with maximum push strenght (worms are pushed high):
If you know that your enemy has a secret weapon that is an airstrike that blasts worms very high, try to have your worms in cramped spaces, against walls or under roofs all the time.
Prioritize being surrounded by walls if the bombs are 10, prioritize having a roof if the bomb is 1.

Costs of every setting

Standard homing (setting available only for guns)
YES = 25
If you want to have this setting, you have to buy “Wind affected = NO” too.
NO = 0

Thse costs of every setting here are very confusing. The costs are approximated.

If you create an air strike, you start with 124 spendable credits

Make every team have 2 available secret weapons instead of 1.
Possibly, have 1 stronger and 1 weaker. In a game mode, you can configure if you can have for example 3 ammo of the weaker secret weapon and 1 of the stronger weapon.

The clusters are too weak for their price.
I would A) change blast, worm damage and land damage cost from 4 to 2. Or B) make the power of clusters in those 3 basic stats 40% stronger.
Having clusters is not important if they are harmless.
Cost of having clusters enabled at 0 power from 12-13 to 4 to 0.

Venom is in the vast majority of cases not as powerful as damage. It takes 8 turns to deal 75 damage and costs the same as inflicting 75 damage in 1 turn. Venom can be interrupted as well.
Make venom cost 30 points instead of 50, or make venom deal 18 damage by turn instead of 10 for the current official price.

Distribution of all 3 basic explosion attributes/settings (land damage, worm damage and blast) is not good. Most often than not, a weapon with 10 points of strenght in 1 setting is significantly stronger than a gun with 5 in one aspect and 5 in another, because useful amounts start at 7 in general.
Make costs slightly lower at power configurations of 1 to 4, and slightly more expensive at power configurations of 7 to 10.

The distribution of blast power is not good. At 0, 1, 2 and 3 the worm is not pushed at all, and you cannot notice the difference at any of these setting strenghts. From 8 to 9 blast strenght, the difference is much more significant and noticeable.
Make guns and grenades have increased blast strenght at blast settings of 1 to 5.

Fused grenades are far harder to use than missiles that explode in touch with something.
Make cost of fused detonation +5 (good bonus $) instead of 0.