That relatable moment when you need money to afford a house, so you go fishing but it’s not enough so you look up a guide on Steam.
An actually useful guide to making money in a reasonable amount of time.

So, you need money fast? Not a problem!

Go look at another one of the ten guides to get 800k before Mall Madness!

Wait, you need money AFTER the first half of the game because you didn’t look up a guide immediately after starting the game for the first time?

This guide is for those elite gamers who decided to play the game WITHOUT guides like a REAL gamer.
Then they decided to cave and read this guide because damn, capitalism sucks.

This advice has been very successful on the part of the author, who managed to get $1,000,000 within 10 minutes after all the prep was complete.

All money is capital. All money is made from profit. All profit is made through investment of capital. It’s an endless cycle, akin to life and death.

And like most cycles, it’s hard to start. Fortunately, Cruelty Squad is revolutionary in its field, being one of the first fishing simulators to include first person shooter elements and contract killing missions.

Just ignore all that shooter gobbletygook and get to the main content of the game: FISHING.

Get your rod in Sin Space Engineering, the 4th level in the game and the one with the wonky pyramid (pictured). 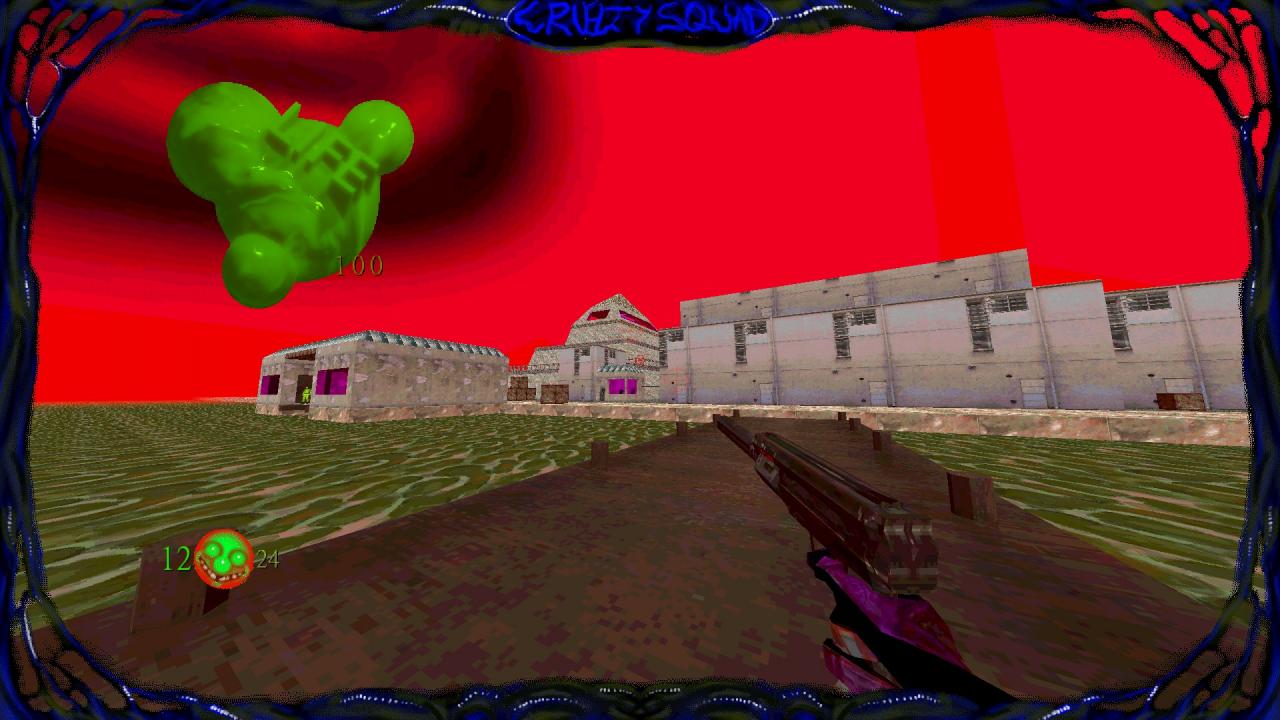 Now from where you see in this level in this picture (nevermind the red glow of the sky if you haven’t seen it before) turn 180 degrees and look across the lake for a cabin (pictured). 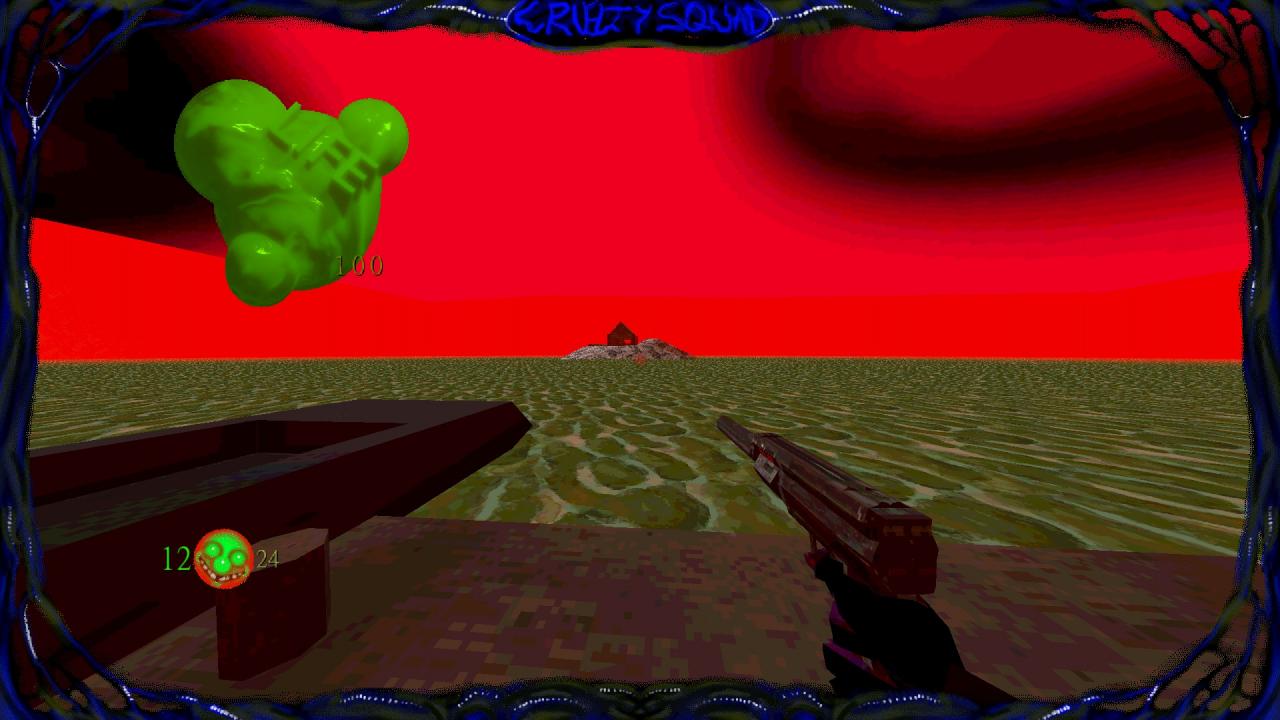 Swim across the lake (hazard suit not included with guide) and go inside the cabin to find a man and a rod on the table (pictured). 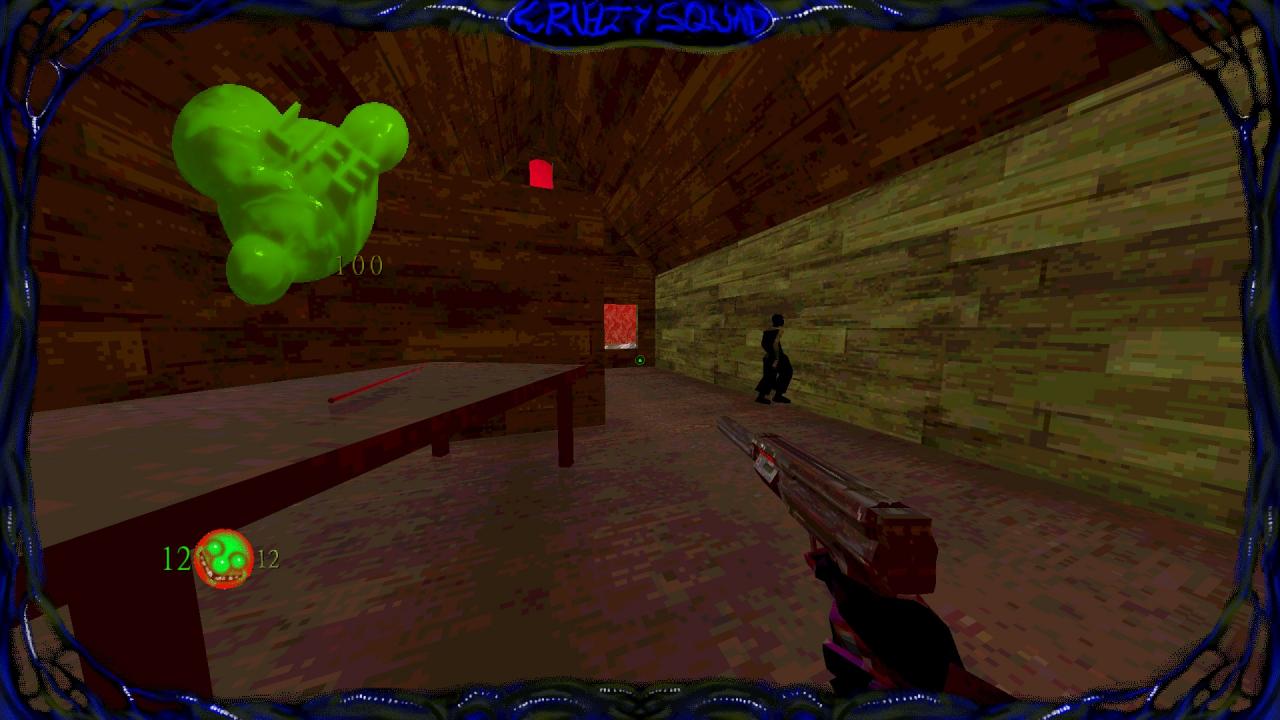 Fun fact: this man dies forever if you kill him! He will never again see sunlight, his family, or his new fishing rod (not included in guide)! Yay, release from this corporate hellscape!

You’ll now have noticed that you can equip the fishing rod before heading into a mission. It takes up a weapon slot and does f-all to anything, but it is the most important tool for your goal of getting that sweet dosh.

Pro gamer tip: The fishing rod, when cast in water, can fish!

For this next part, you’ll have to complete all missions until unlocking “Idiot Party”.

In this mission, your objective is to infiltrate the secret enemy lair and assassinate the enemy priest before he… does something bad!!

But ignore that for now, you have fishing to do. Bring your rod.

From the spawn of this map, you’ll see a building. Don’t go in this building, but instead follow the diagonal wall on the left (This arrow points left [<—–]) until you find a cave in the side of the cliff bounding the map from the endless void outside. 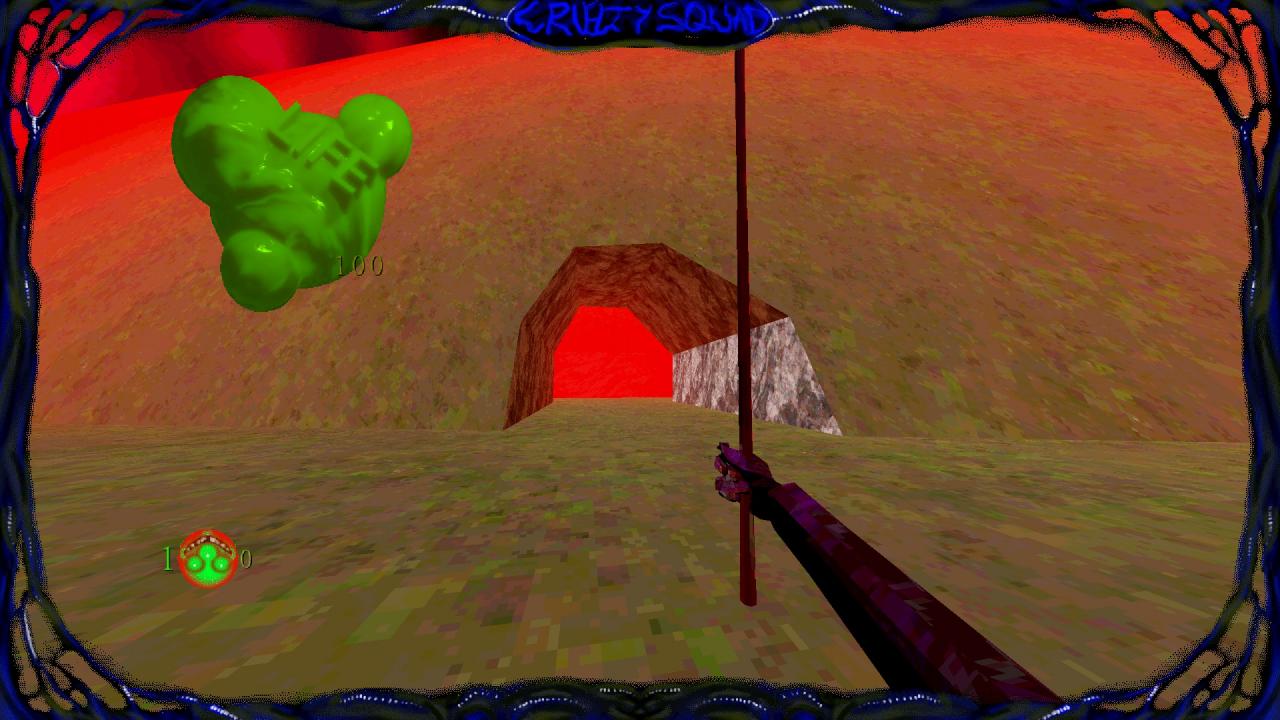 It’ll look like this. Go inside the cave and look around for a square on the ground and interact with it to unlock the Tattered Rain Hat. If the square is not present, you already have the hat unlocked. 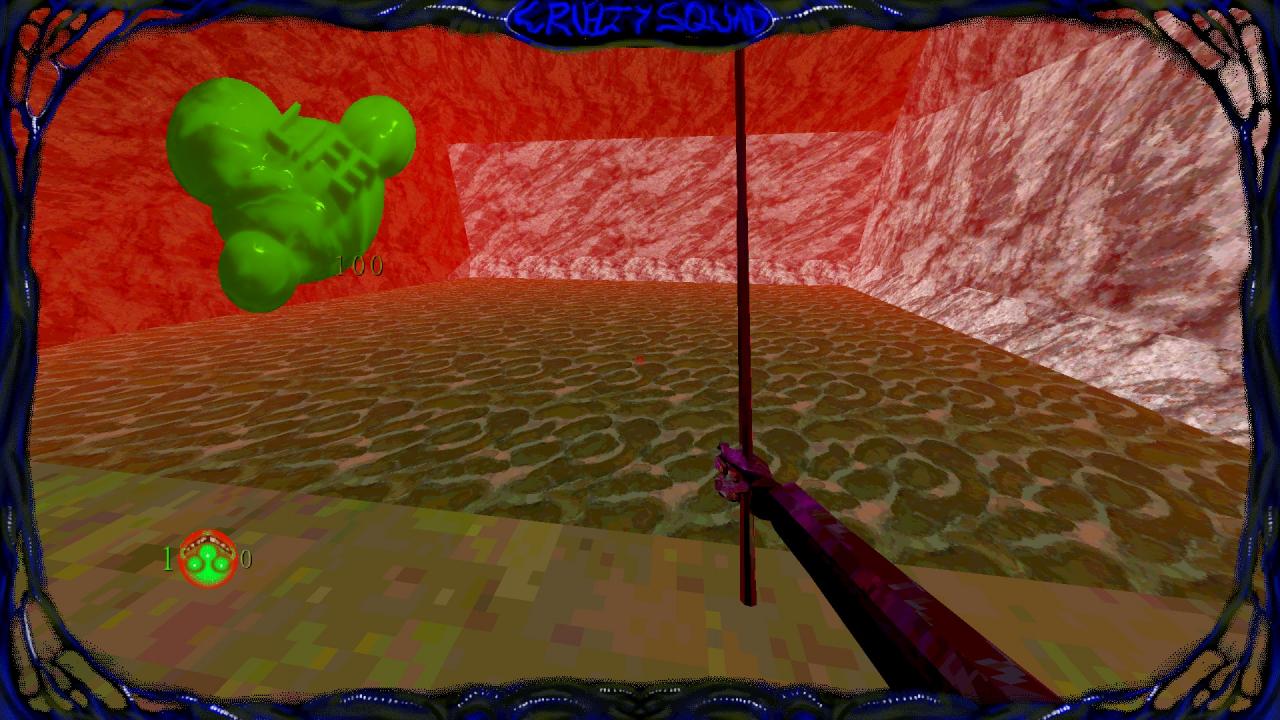 (Please ignore the red fog and sewer water. Your results may differ.)

At this point, you can exit the level and equip the hat, or just decide to ignore it. There’s inconsistent information on the internet as to what exactly the hat does. Some people say it increases the rate of encounters for fish as a whole (lower time between bites). Others say it increases the time you have before a fish gets away after it bites. Even other Others say that it makes rarer fish spawn more often. The guide maker says that he gives no f***s about it, and that you can take it or leave it as you please. Please note, however that the hat DOES for sure change the music to something resembling actual, listenable music and that’s pretty cool. No judgement will be passed as to how stylish the hat is in this guide.

After you’ve decided your stylishness or lack thereof, go back to the Idiot Party cave where you found your hat (or remain there if you never left, you hatless fool).

Pro gamer fishing tip: Fish here are actually all pretty valuable. Some gamer fishermen suggest fishing in other levels for extremely rare, extremely valuable fish. Those gamer fishermen are chumps (in Minecraft). Rarer fish also have much lower amounts of time before they get away after biting your line, pushing only a frame or two with the hardest to catch fish. That’s a matter of hundredths of a second after a random delay. The DOSFish, catchable in the Office level gave the writer of this guide an almost equivalent amount of anguish as living in this capitalist hellscape, even with the prerequisite, required, stylish Tattered Rain Hat which might not do anything at all.

So you are fishing, have fished, and continue to fish? Good job, you have fish. Fish are not valuable. Bitcoin is valuable. Therefore, you should sell your fish on the stock market.

Press Tab. Just do it. You’ll see a mess of an economic system visualized by graphs and numbers. 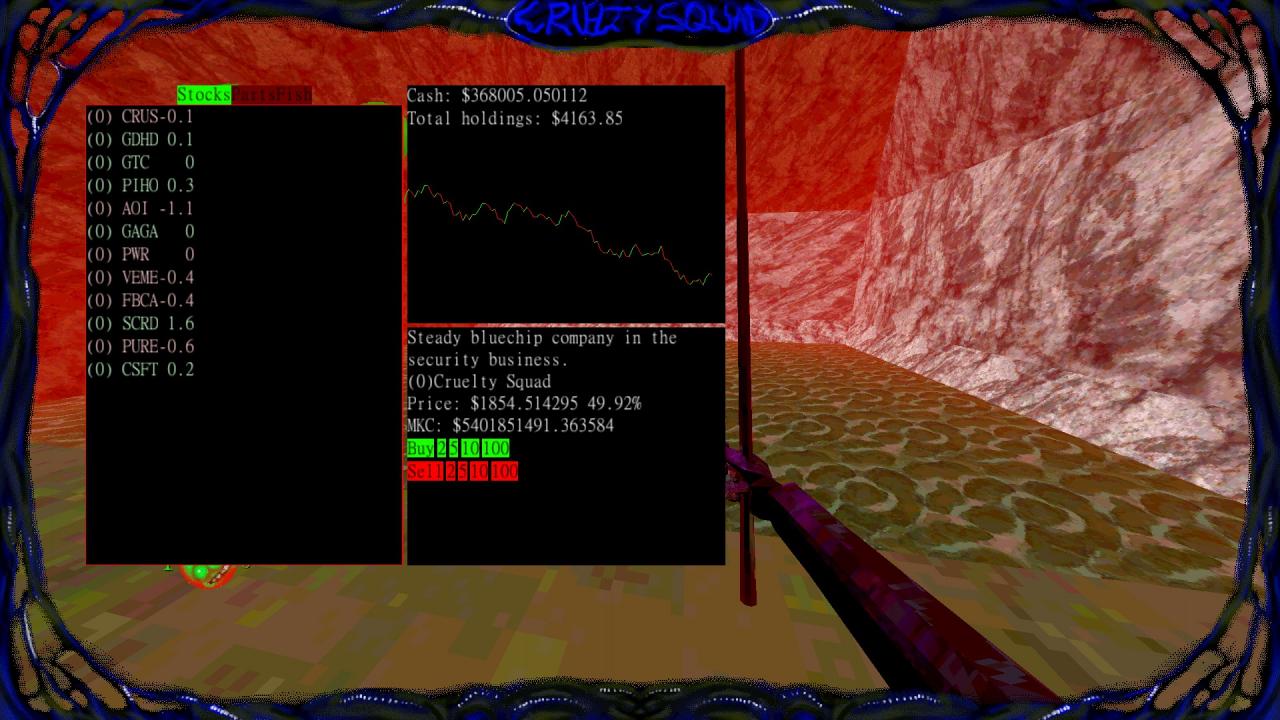 Go click on the ‘Fish’ tab. You’ll see a mess of a fish system visualized by graphs and numbers. 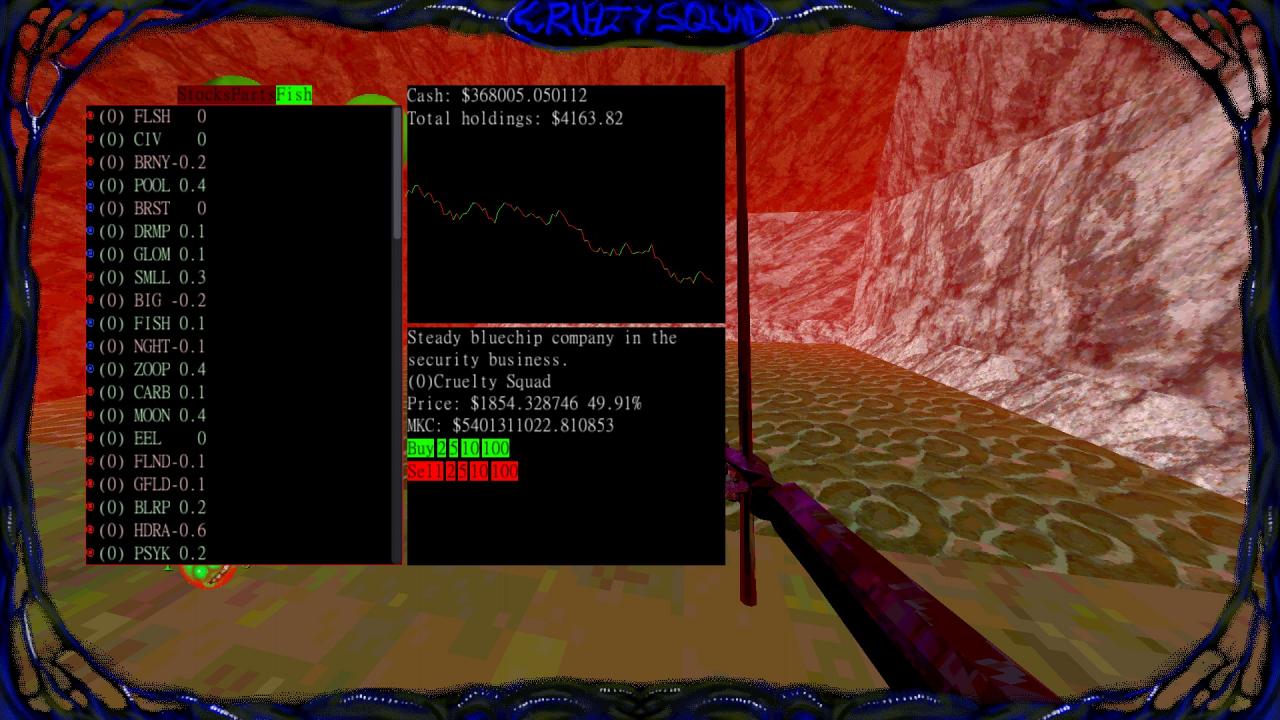 Scroll down on the left side of the screen until you find the fish that you actually own. 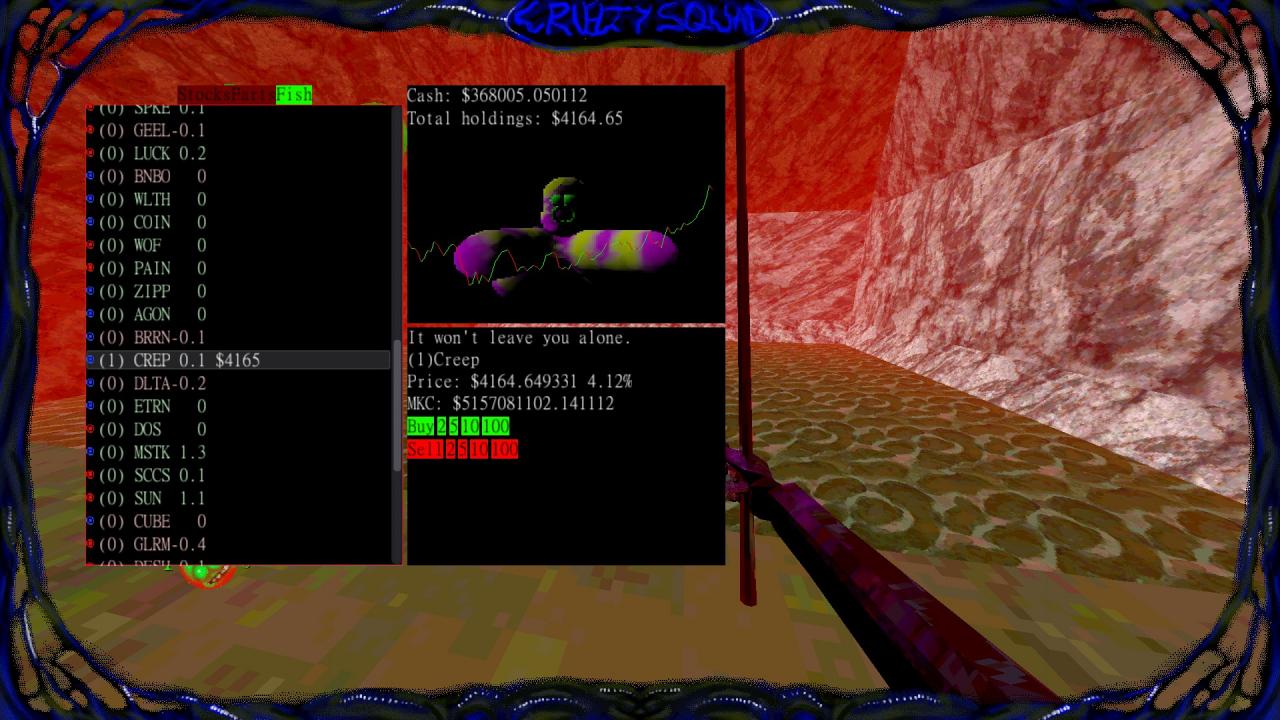 Click the ‘Sell’ Button, or the numbers beside said button to sell that many.

Continue to fish and sell the fish until you have roughly $300,000 (at minimum). $600,000 would be the best, but not everybody has an hour of attention span.
This is the grindiest part of the process, but should hopefully go by before 20 minutes have passed.
I recommend selling in bulk and giving your full attention to fishing otherwise. There is a rare fish here that can be caught for $100,000 and most others sell between $4,000 and $1,000.

Once you have your $300,000, you can finally start making money quickly. First, head back to the menu and go to equipment. Use $250,000 to buy the Eyes of Corporate Insight. These little dohickies make time speed up like taking a depression nap after thinking about the fact that we live in a corporate hellscape, but specifically only for the stock market. Thankfully, they also work on the level select screen as long as they are equipped.

Anyways, don’t wear them and don’t enter a mission. Instead, reopen the stock market and go back to the ‘Fish’ tab. Scroll down until you see MSTK, otherwise known as Mistake (also a popular nickname for me in high school). It’s a fish, I’m kinda sure. This fish wildly fluctuates between $10 and $50.
Your strategy involves a particular dance with these fish. If the fish value goes low (typically <$15) you should buy as much as you can. Empty your bank account. If the fish goes high (>$35-40) get rid of the things like my mother got rid of me. Repeat ad-infinium or until you have a Scrooge McDuck money pit.
However, the stock market is really slow. This is where the Eyes come in. When the market isn’t in your favor (you have no fish, and the price is mid-high or you have fish and the price is low) you can equip the eyes to “skip forward” to a better point in the market. 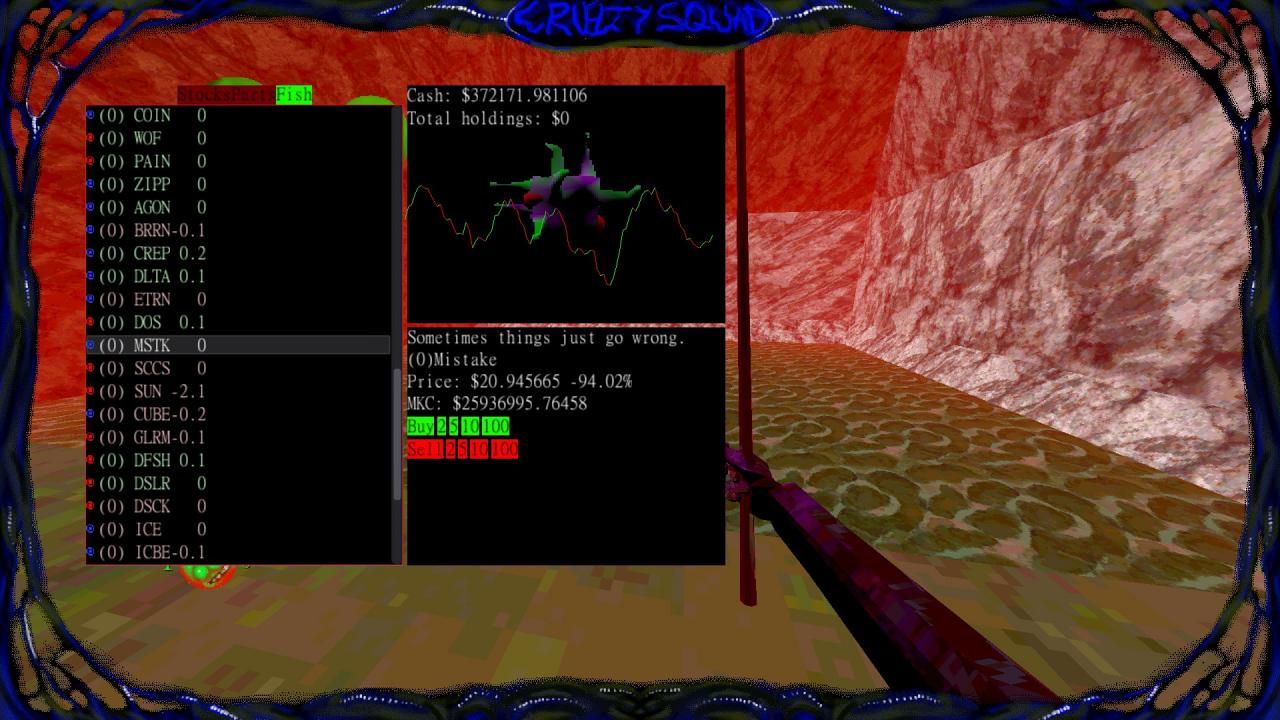 Mistakes are unique in the fact that the price varies wildly into the tens of dollars of difference. Most stocks and fish vary only a dollar or two at most, which makes it hard to get a significant profit. Mistakes aren’t like that. They’re the other other other white meat.