Level by level guide to getting the achievement ‘Boondock Saint’.

You can cheese the achievement by typing theresnoplacelikeoz to skip levels. However, you’ll get an achievement for using cheat codes.

1. Non-hostile means any living thing that doesn’t have a weapon. Don’t kill means you can’t let them die ever even if you weren’t the one who shot them. It’s fine if a civilian got shot and is running around but reset if they’re on the ground.
2. Finish the game at least once before. I recommend getting Z for Zachariah first just to have a general idea of where buildings with civilians inside are.
3. Play the main game. Just playing Special Delivery or Super Postal won’t give you the achievement. I’m not sure if you can get it in Excess Postage but it’s harder so why would you.
4. Difficulty impacts the number of hostiles and non-hostiles. Numbers I’ll be giving are for the easiest difficulty.

1. Save at the start of every level. Saving mid-level is pointless because saves don’t record where you are on a level.
2. Don’t commit suicide when a non-hostile dies. You have to quit to the main menu and load your latest save.
3. Overwrite your previous saves only when you’re sure you didn’t make any mistakes.
4. You will fail some levels multiple times, feel free to take a break.

1. Finish a level as soon as you can. Don’t try to 100% it.
2. At the end of each level subtract hostiles from population. Retry if it’s not what it was at the start.
2. Hostiles can and will accidentally kill non-hostiles. Take cover if there’s a non-hostile between you and a hostile.
3. Avoid going near buildings with civilians inside. You can snipe hostiles in front of them with your machine gun or your rocket launcher. I recommend retrying the level if any civilians get out.
4. You can see more of the map by playing on a 4:3 resolution but I wouldn’t bother with it. 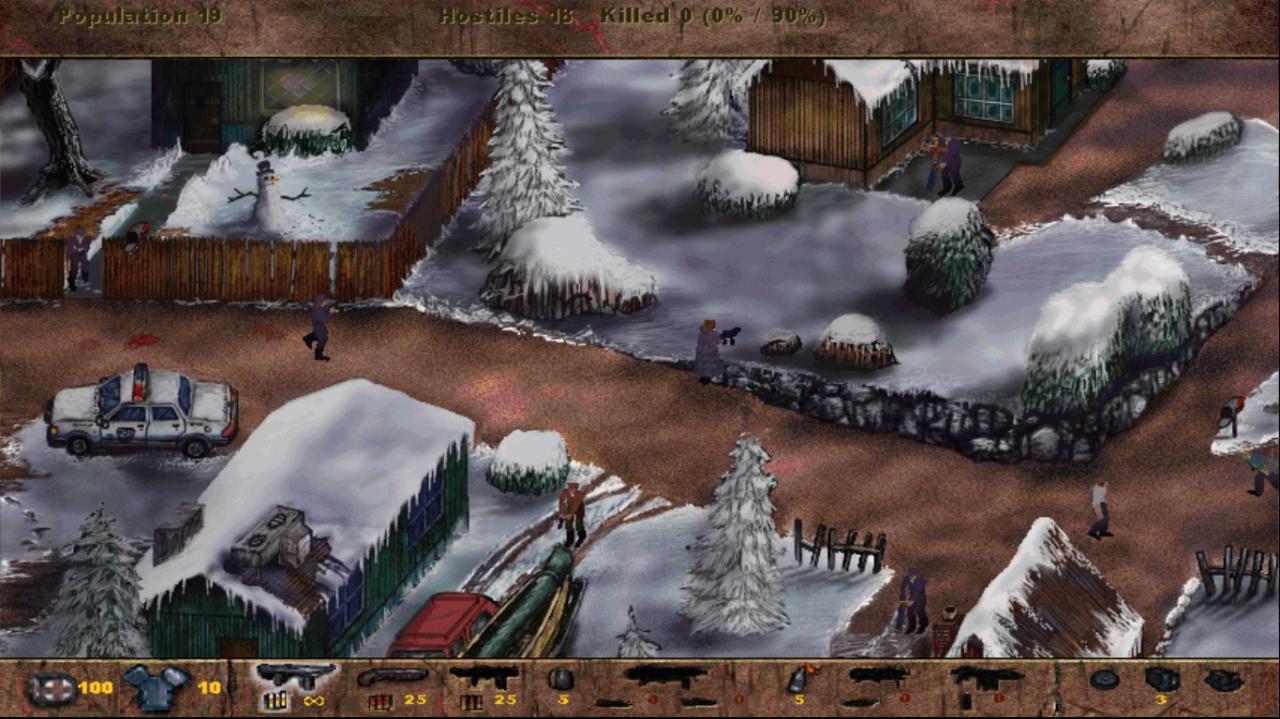 There’s only 1 civilian walking around and 3 in the house next to yours. Snipe the cop in front of the house with your machine gun to avoid going near it. 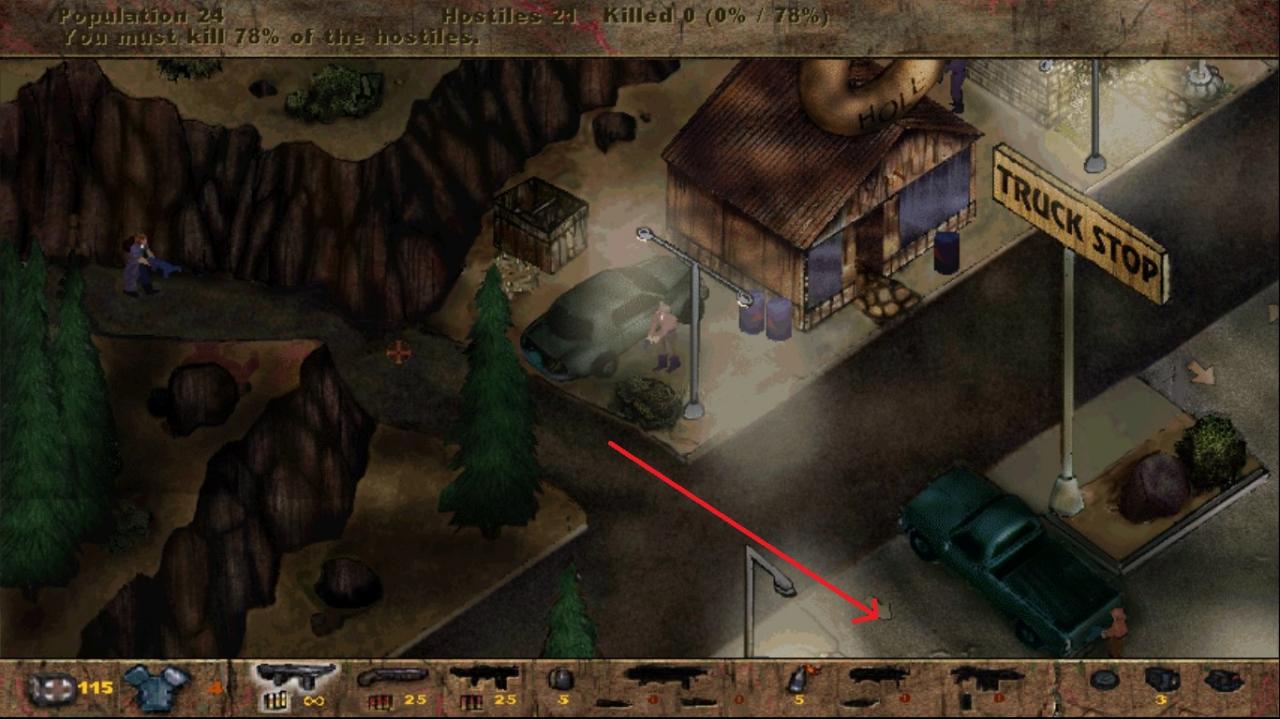 There are 3 civilians outside, 2 cops in the donut shop and 2 civilians in the gun shop. Avoid the stores completely. Shoot the hostiles in between the buildings from the other side of the road. 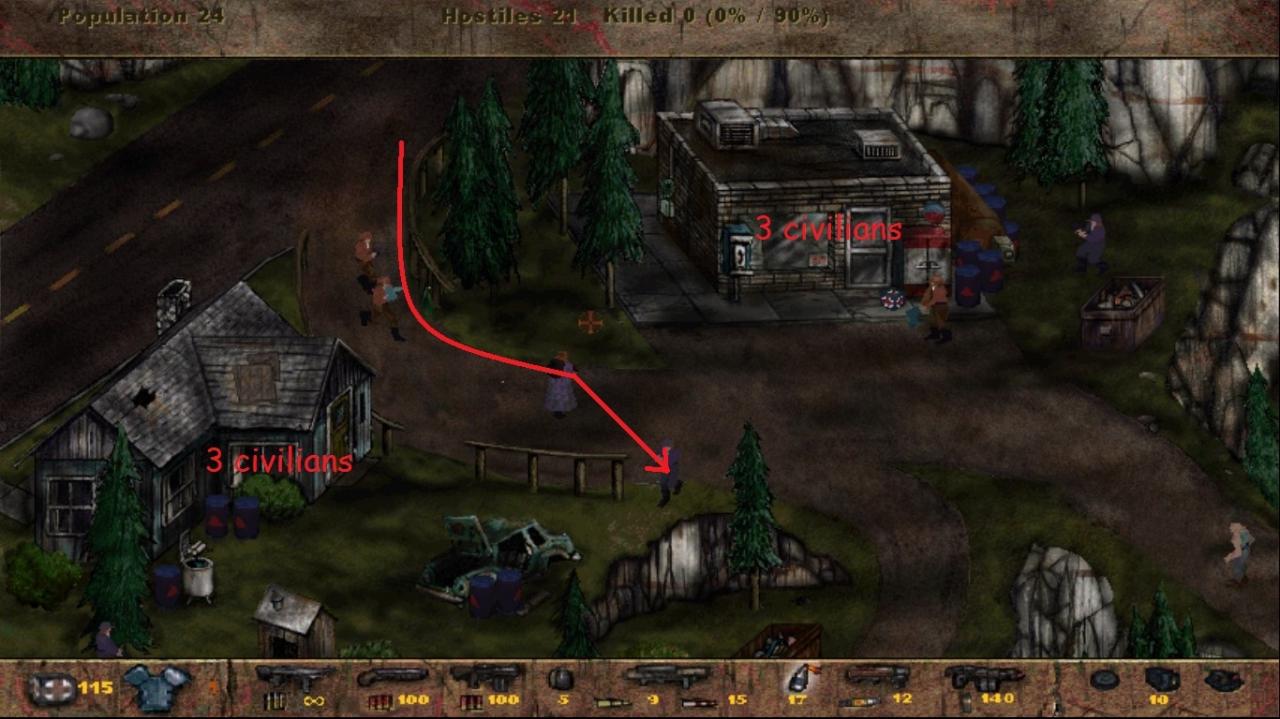 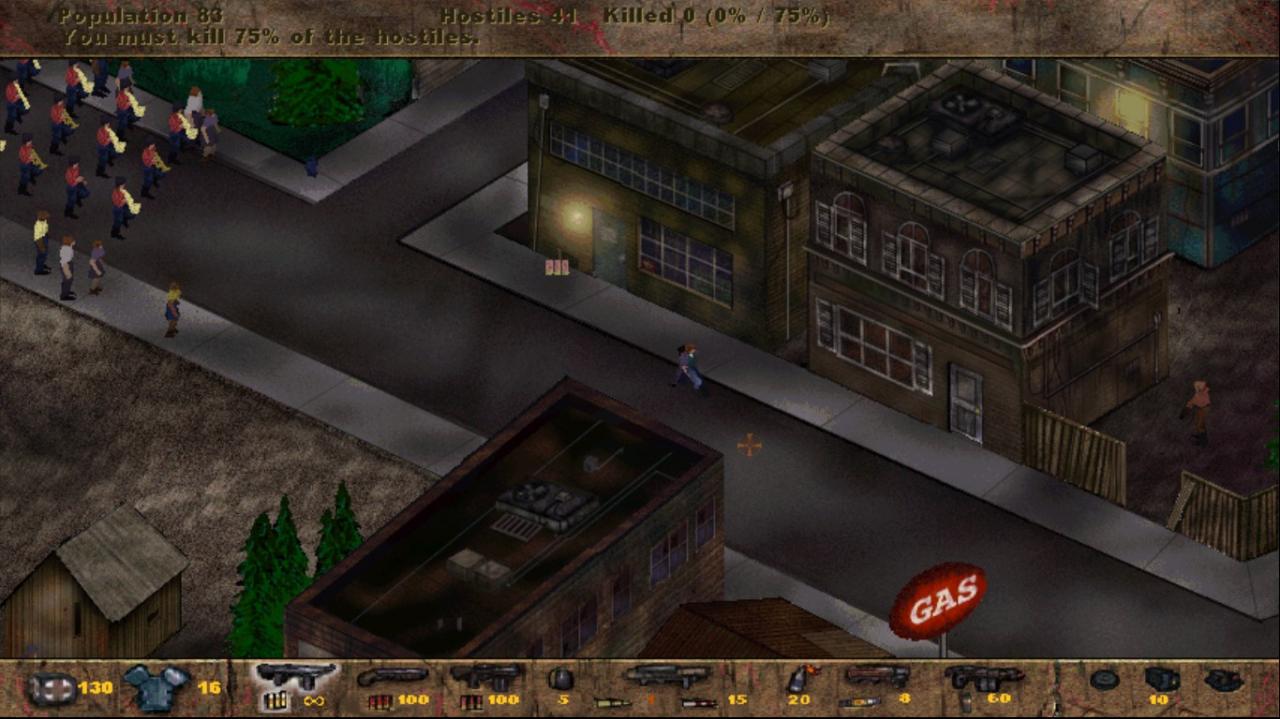 In my opinion this is the hardest level and if you’re past it you’re halfway done. 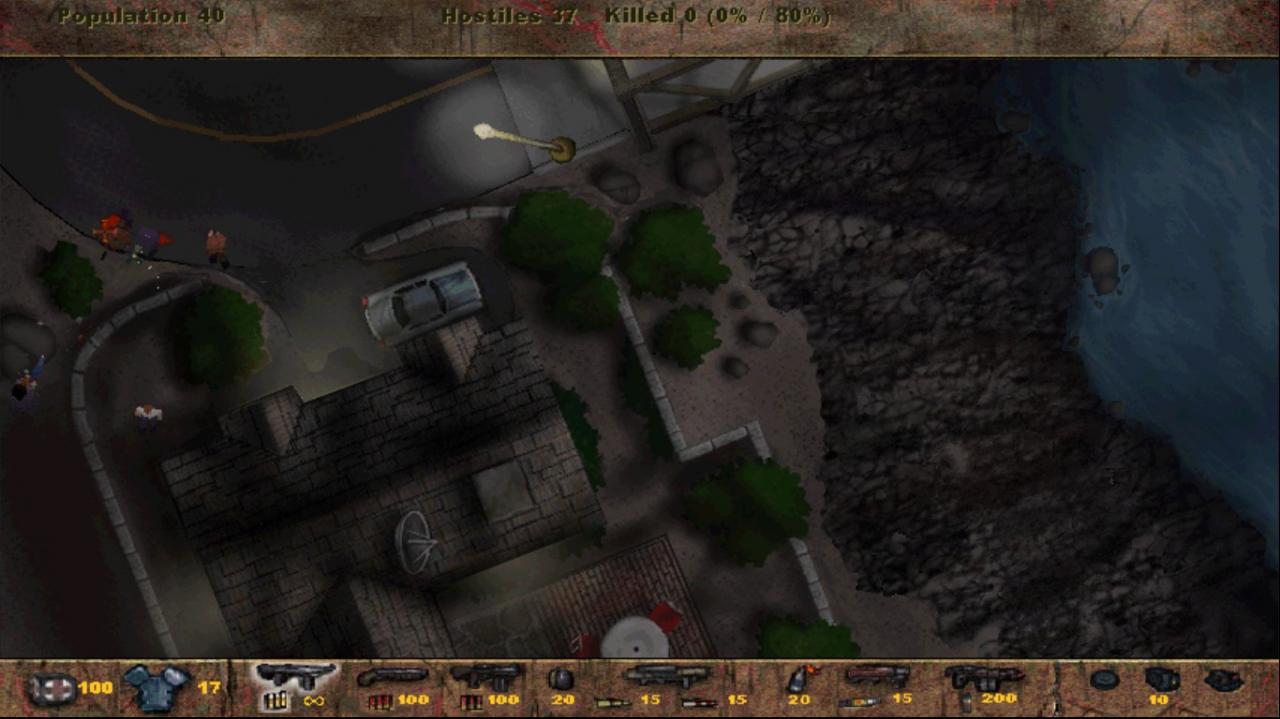 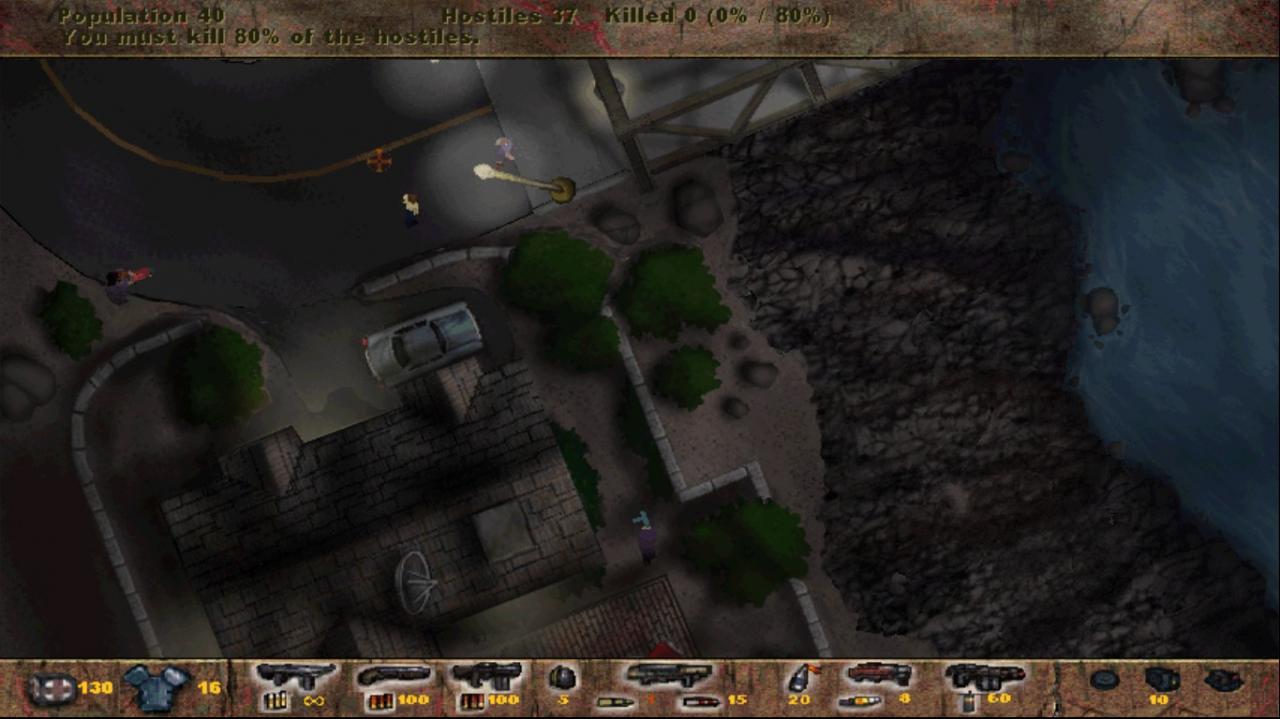 There are 3 civilians outside, 3 in the house above and 4 in the house below. Go to where I am in the second picture so hostiles won’t shoot civilians. Civilians will exit the buildings if you go up or down so just cross the bridge, preferably when there are no civilians on it.

(The Mine and The Junkyard have only hostiles.) 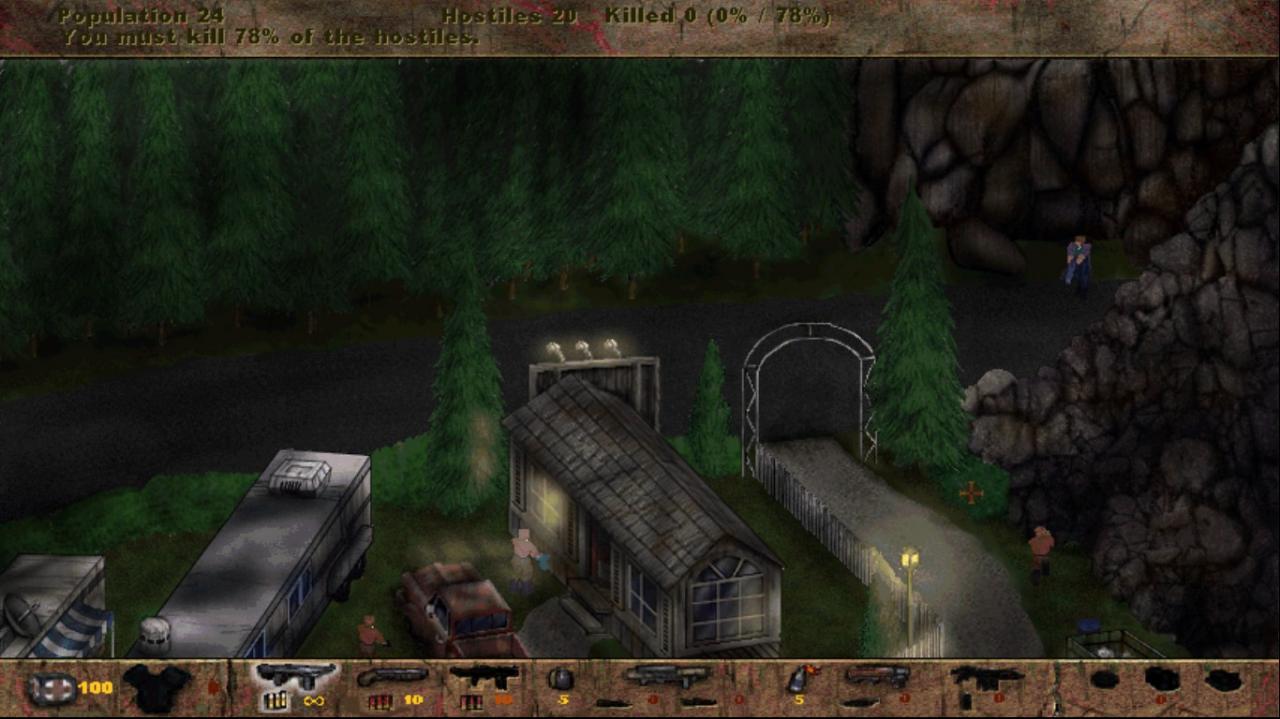 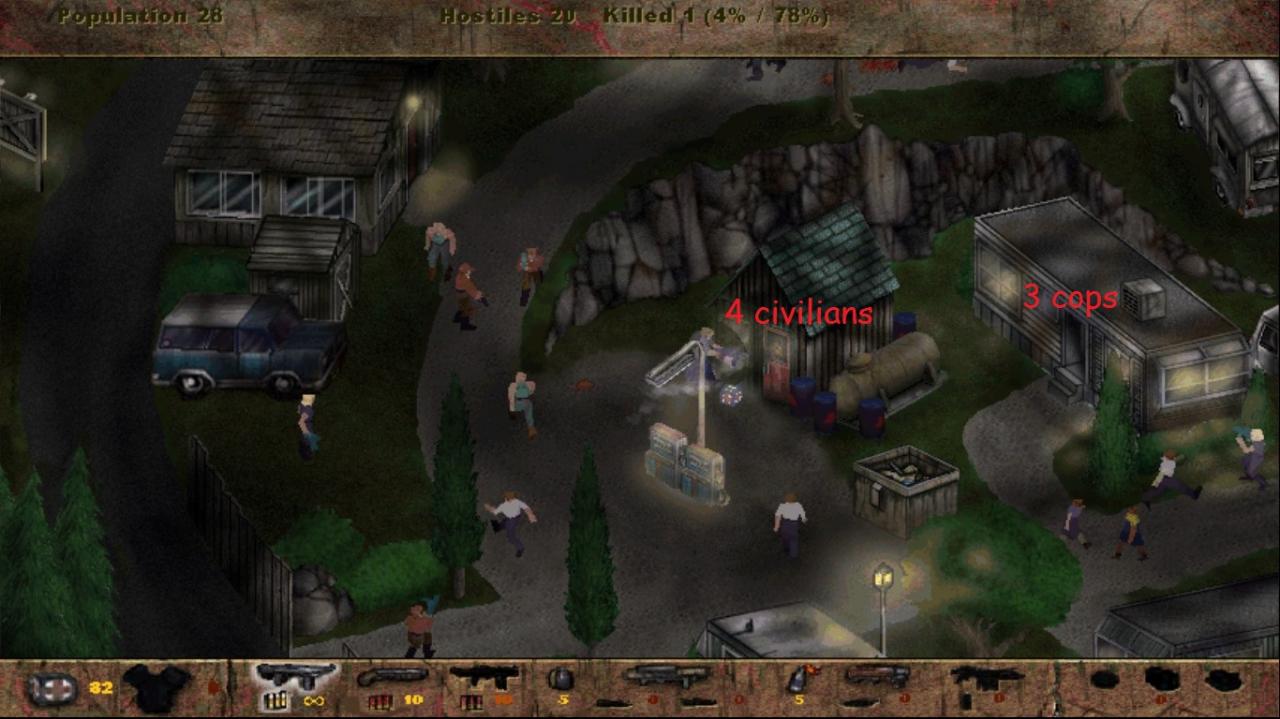 There are 4 civilians outside and 4 in the shed in the second picture. There is 1 cop in the house closest to where you start and 3 in the trailer right behind the civilian shed. Rest of the buildings are empty. 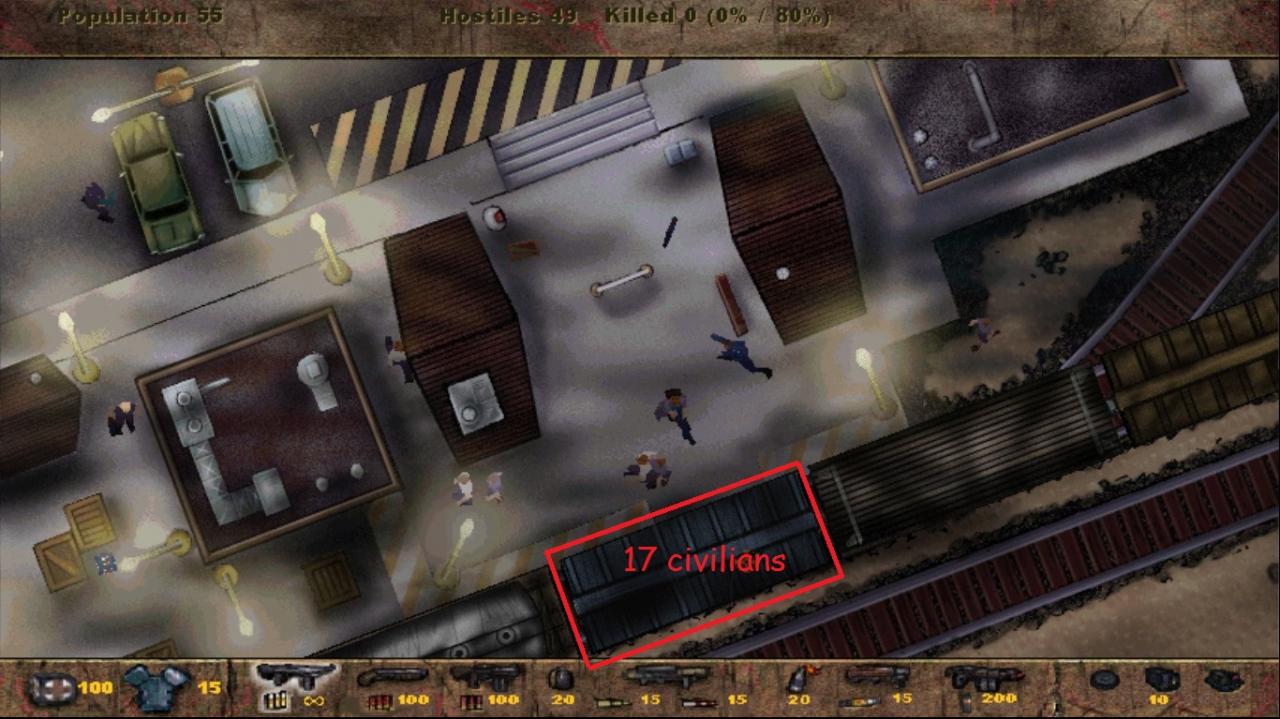 There are no civilians outside and 17 inside a train car. Don’t approach this car from either side. 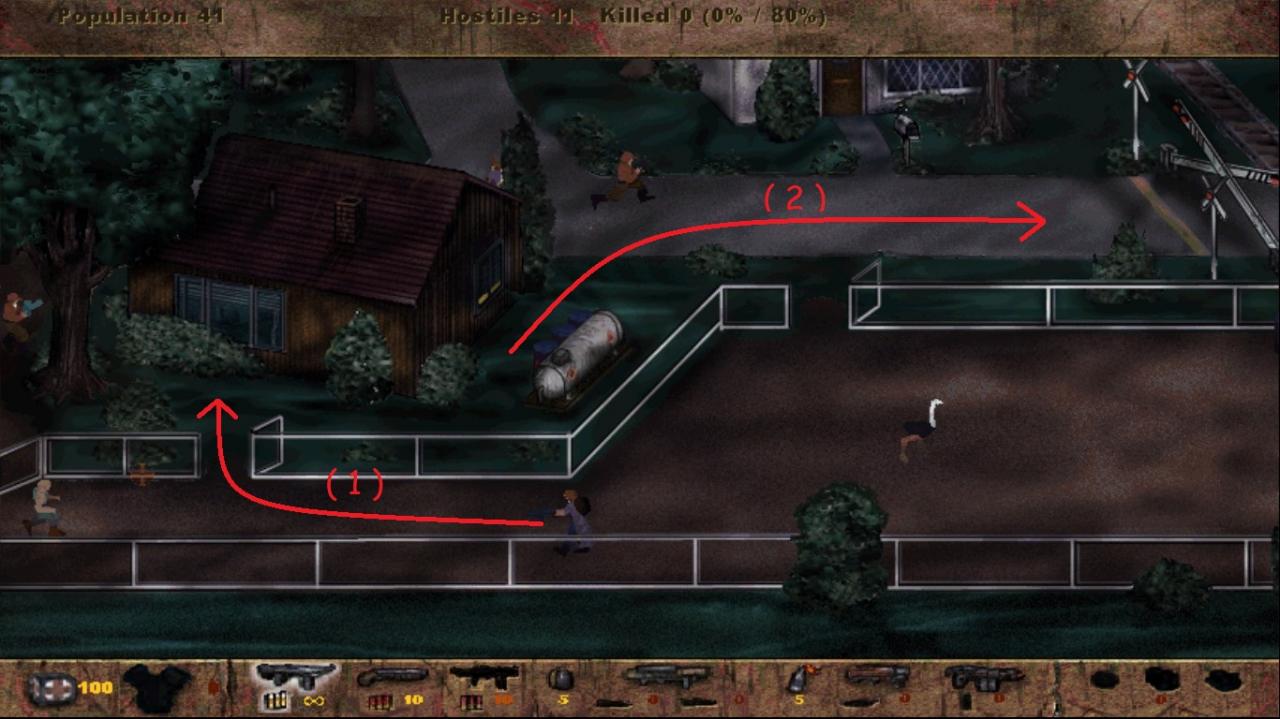 There are 30 non-hostiles including ostriches. Go left first to keep ostriches safe. All buildings are empty.

(The Construction Site has only hostiles.) 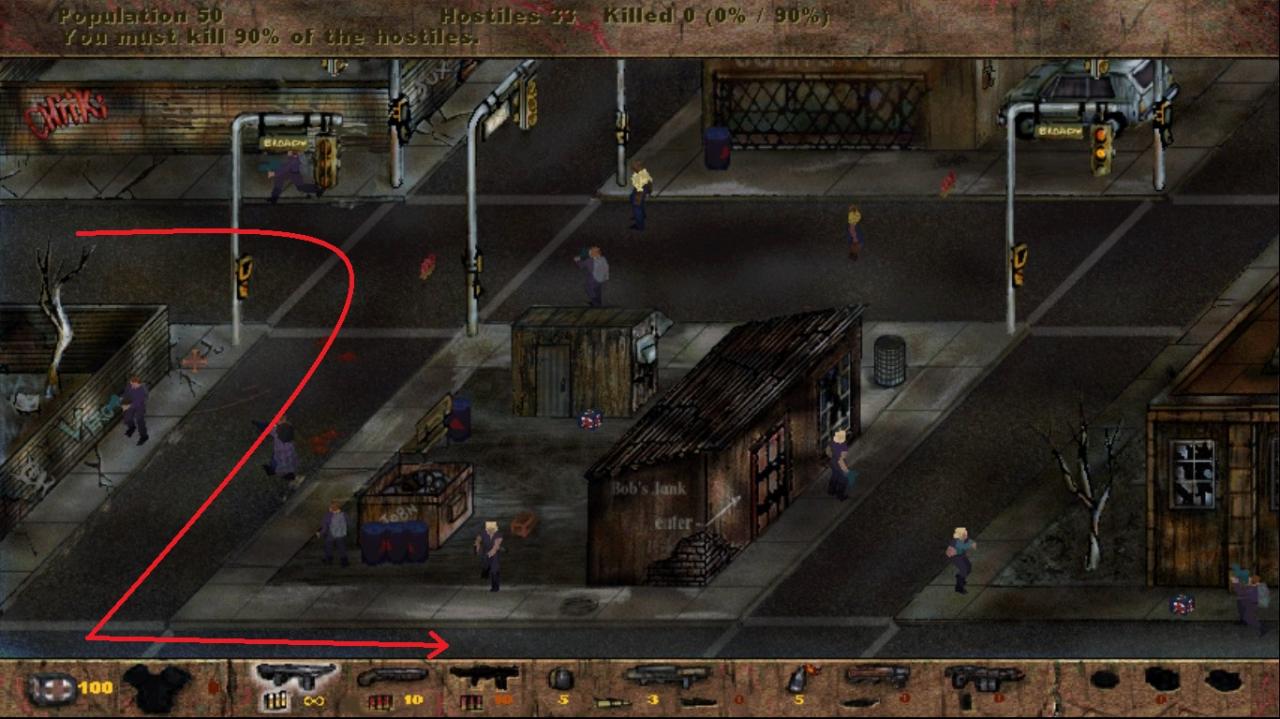 There are 17 non-hostiles. All buildings are empty. Unlike Postal 2, protestors aren’t hostile. Start going right while killing all hostiles on your way. Go up to the church then start going left. 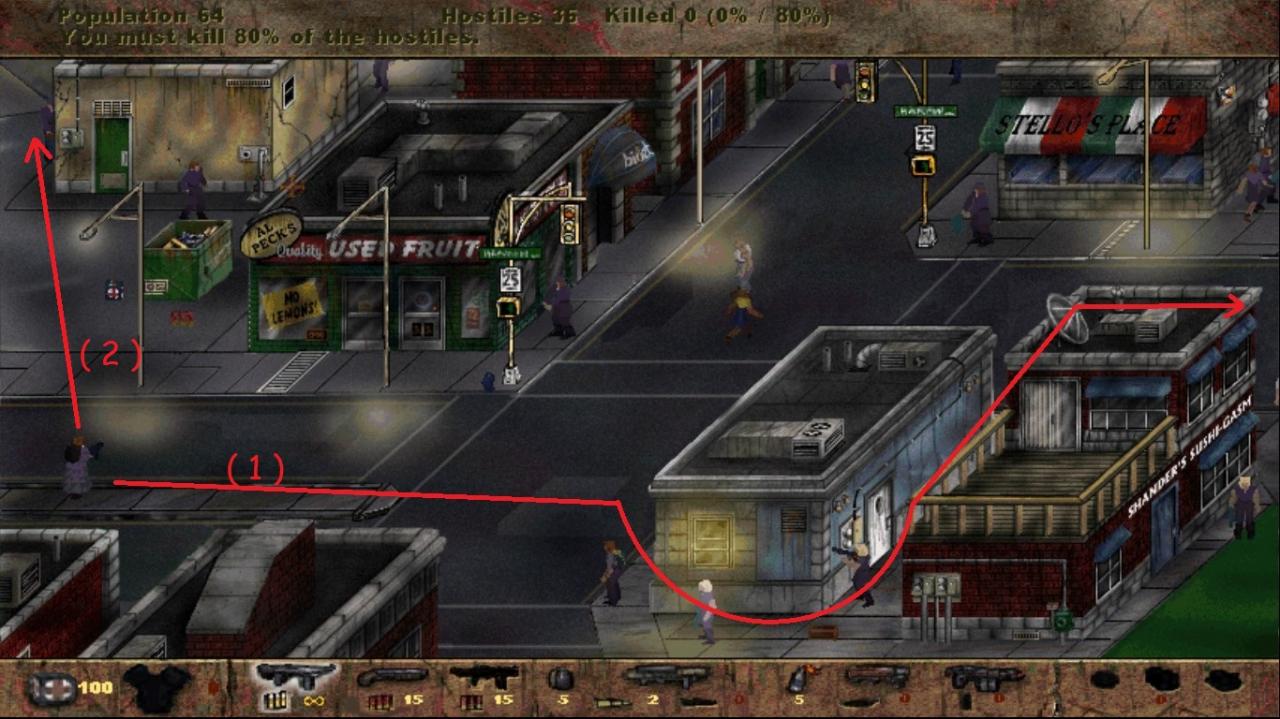 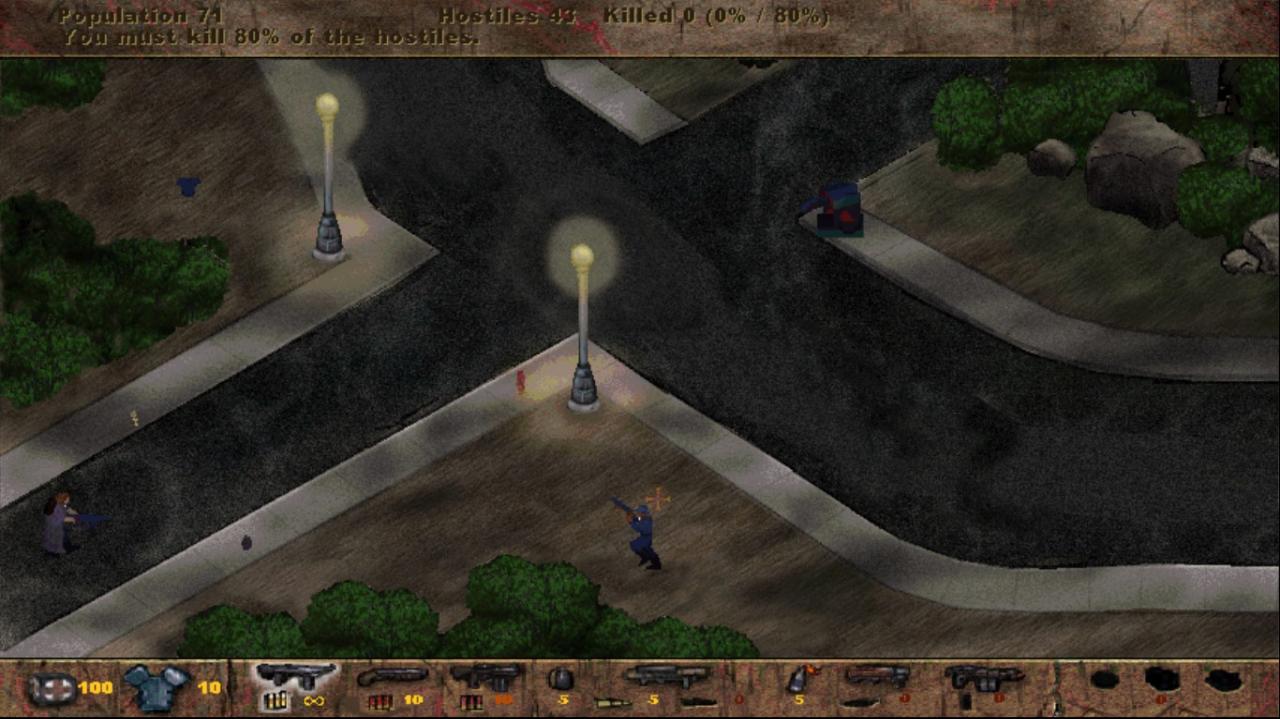 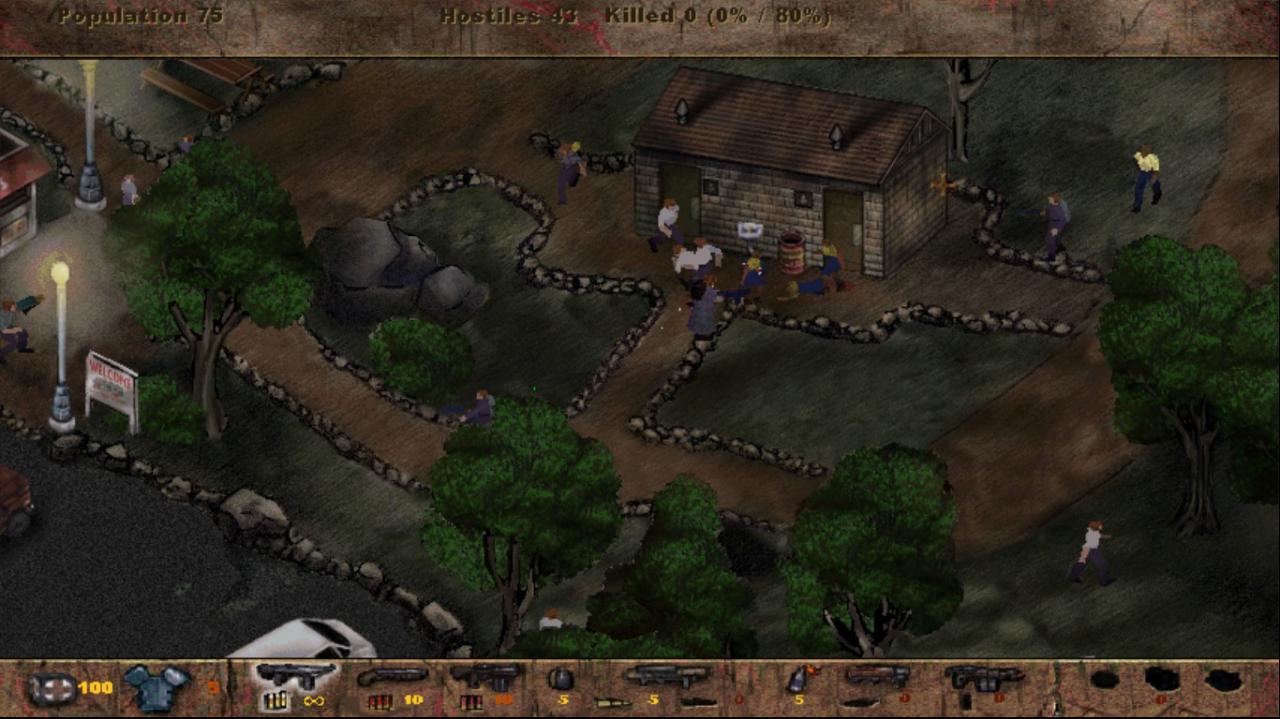 There are 28 non-hostiles outside and 10 civilians in restrooms. You can avoid most civilians if you go right, go up after destroying the second turret then go left to the minigolf course. 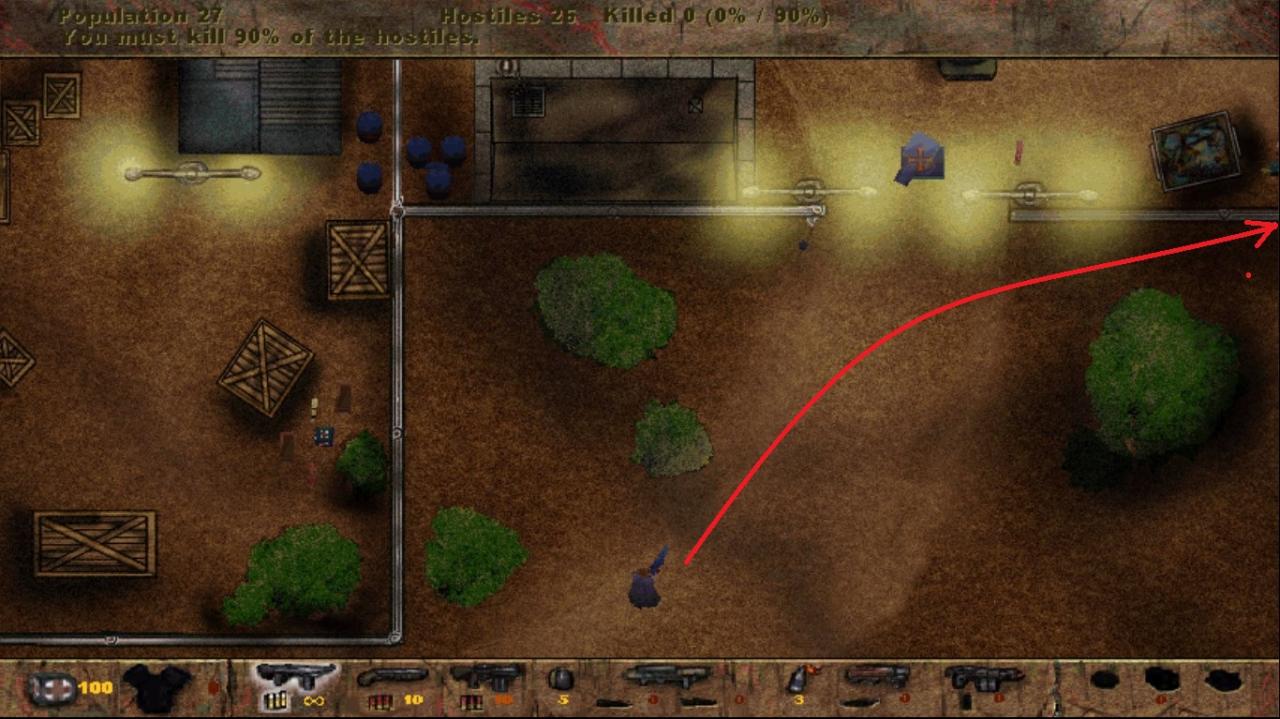 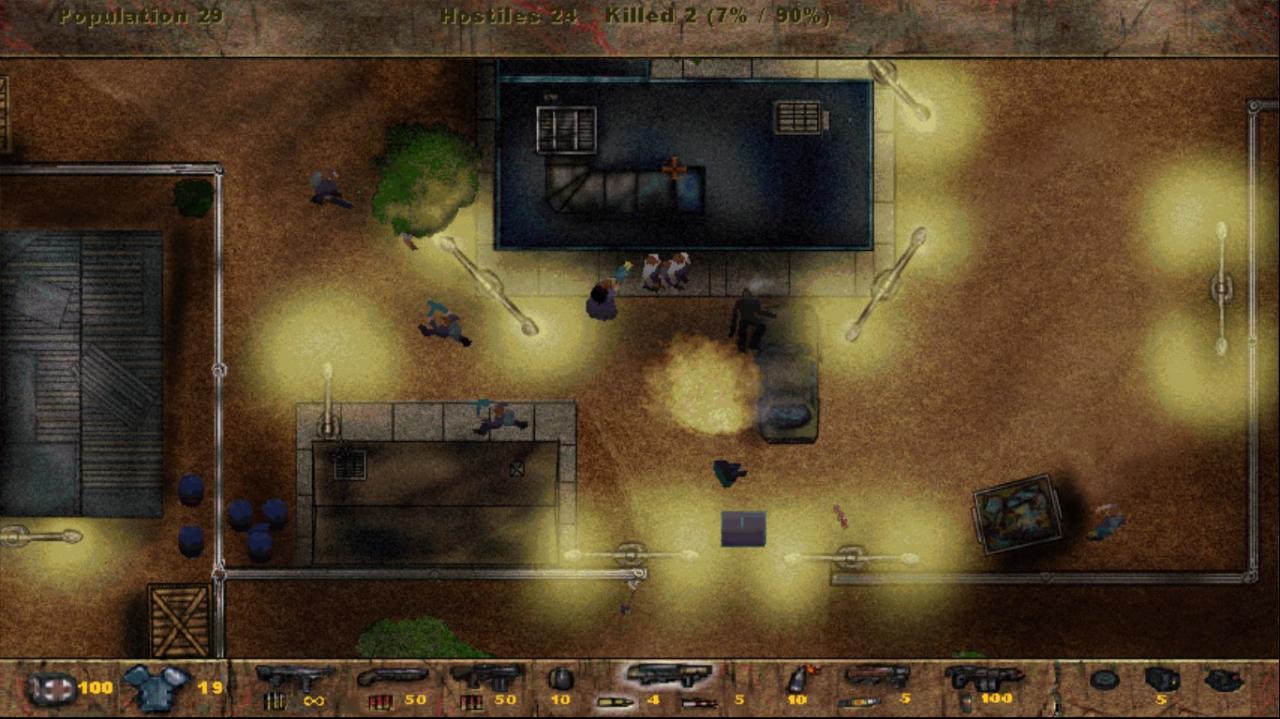 The only non-hostile outside is an ostrich but there’s a building with 7 civilians inside very close to the entrance. Head to the entrance on the right after killing the sentry and nearby hostiles. 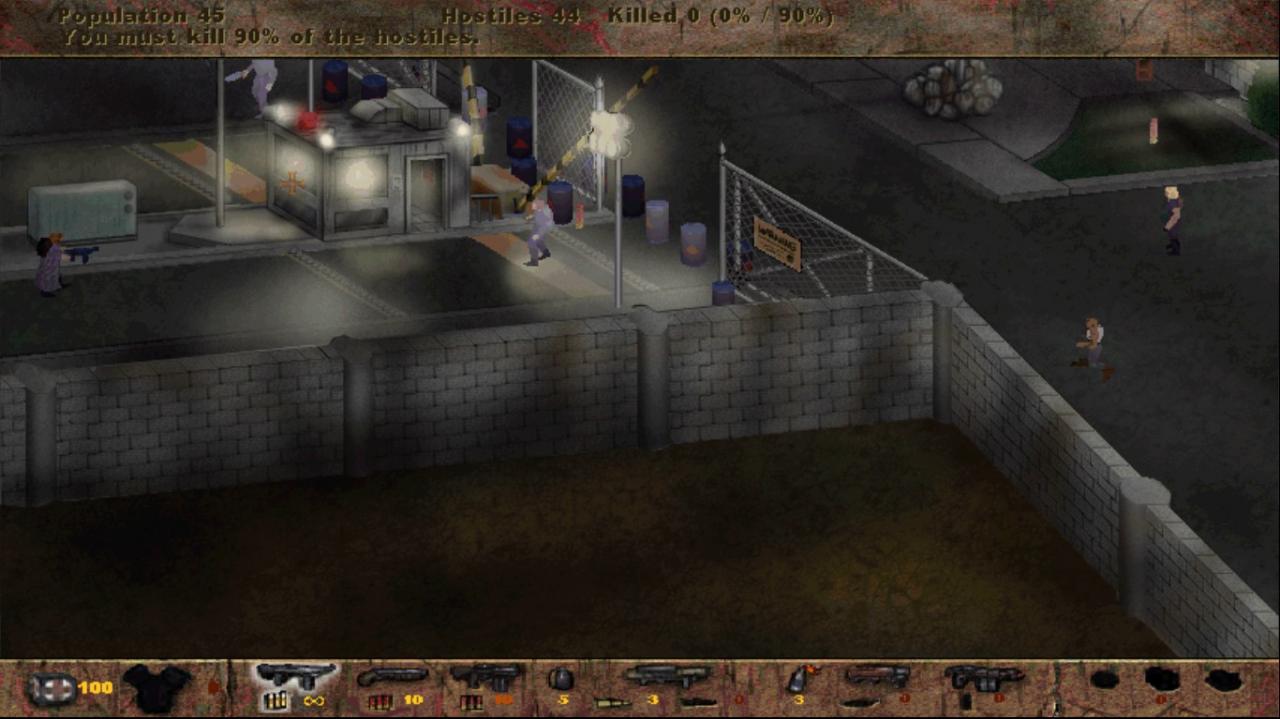 The only non-hostile is an ostrich. There are a lot of buildings with hostiles in them but you can deal with them by throwing firebombs at their doors before approaching.