A highly classified guide to the various types of Psychics. Unauthorized access is punishable by mindwiping and reassignment.

If you’re reading this, congratulations! Arcadia welcomes another stalwart defender of Condatis to their ranks. This guide shall help you understand Psychics and their relation to non-Psychics.

Now then, generally Psychics are deployed in their Psychic Suits, the latest models being variations of the Solstice VI armor Howell-Barrex is cranking out like sausages.

They are fast as hell, unmodified moving at 5 meters per second, the fastest movement speed of any combat suit. They have the same energy regeneration of an Assault suit, and are a bit less durable than a Heavy suit. Capable of carrying the same armaments of an Assault suit unmodified, carrying a decent amount of Offense and Support slots for further upgrades, and every Psychic-designed module can be used faster the more energy is routed to it. They also naturally regenerate as though they had 3 duplex life support modules crammed into them.

Now they are not gods of war, with the lowest base health of any combat suit, with less base health than a Recon suit. All of their abilities strain their bodies, costing them health with every cast. Their support capabilities are limited in time and availability, and they have the same SIMC slots as a Heavy. Their most powerful abilities place them in danger, or can place their allies in danger. Their more exotic modules also take up more slots in the suit.

These Psychic powers let the Psychic defend the stalwart forces of Condatis.
Modules

Bond
The Bond module enables the Psychic to channel their abilities to share damage one man takes across the entire squad, usually unused but some handlers believe that it may let the combat suits the squad is using dampen the damage further, but it is currently unknown. In any case, it provides a small bonus to resistance against everything, increased as the module receives more power. The strain of use and suit energy required is reduced as more power is invested. It massively strains the Psychic to use, but is lessened to a manageable amount as more power is invested.

Forcewall
The Forcewall module allows for the conjuration of a Psychic Barrier. Being conjured after a small delay and lasting for several seconds, it completely prevents the passage of anything through it, allies and enemies included. Not taken often either, its length extends further as it is powered, potentially being able to block off an alley. It massively strains the Psychic to use.

Pulse
Shared with the Support section, Pulse enables the Psychic to create a cleansing orb at a location, removing any ailments such as broken limbs or poison and boosting their speed by a small amount. Decent overall for the ability to both cure and speed a man at a distance, although the cure is only when they receive an orb while not sped by another orb. Strains the Psychic a token amount, but still an amount.

Mind Blast
Shared with the Offense section, Mind Blast deals a small amount of pure energy damage to nearby enemies, along with pushing them back. Useful for if they get close in to the Psychic, or for killing weak-minded enemies. Strains the Psychic a token amount.

Destructive Abilities
These abilities leverage the Psychic’s power to obliterate their foes.
Modules

Pull and Throw
This module is standard for Psychic suits, capable of enabling telekinetic lifting of objects and the weak-minded and throw them at a point, destroying the object and dealing damage in an area. Massively strains the Psychic however, and can be used quickly in cases of emergency. They are not issued grenades in fear of what they could do with a grenade module.

Apportation
Shared with the Support section, this module lets them forcibly teleport an enemy to a target point. The sudden arrival confuses and minorly suppresses them. It only becomes capable of teleporting the strong-minded at high energy levels. Usage of this module massively strains the Psychic.

Psy Blast
Requiring the Pulse and Mind Blast systems to be known to the Psychic and unlinked to other Psychic abilities, Psy Blast fires a highly damaging beam of raw power from the Psychic, capable of penetrating walls and destroying even Reaper Turrets with repeated use. The more energy invested into the module, the lower the strain inflicted on the Psychic, more damage and the more suppression the beam deals. The main drawback to this module is that it is expressed as Kinetic damage, and can be completely absorbed by a block of Armor. The conjuration of a beam of destruction massively strains the Psychic.

Maelstrom
Usable by particularly strong Psychics, the Maelstrom module lets them conjure a localized storm, with them as the center. With it firing lightning strike at nearby areas, even underground, it is highly hazardous to anyone in it, although safety can be found near the Psychic. As more power is allocated to this module, the strain of conjuring the storm is lessened, the storm itself lasts longer and strikes more, and the safe zone around the Psychic closes. It massively strains the Psychic to use.

These abilities enhance the team, or enables the set up for highly destructive actions.
Modules

Shock Troopers
A Psychically activated module, it calls in a squad of Arcadian agents to the Psychic, who will then escort them. Requiring a large amount of energy to use, it minimally stresses the Psychic to use. At half power, another agent can be called in, while at maximum power it can teleport in another for a full squad every use.

Psy Booster
A completely supportive module, it lets the Psychic “charge” the bullets and actions of their squad, boosting the damage dealt and suppression inflicted, while boosting the damage of their modules. It also boosts mending their wounds. As more energy is routed to it, it lasts longer and is boosted in strength. Usage massively strains the Psychic.

Bilocation
A simple module, it lets the Psychic conjure temporary illusions of their entire squad, who can take blows for them. Upon dissipating the collapsing energy damages and suppresses nearby enemies, proportionate to how many were conjured. Higher energy results in an increase in damage and suppression and radius of their dissipation range. It moderately strains the Psychic to use.

Apportation
Shared with the Offense section, the Apportation module is roughly the same in use for both sections. More details can be found in the Destructive Abilities section.

Gravity
A highly useful module, it lifts enemies in an area for a while, immobilizing them regardless of any other circumstances. Stronger wills can break out of the psychic lift faster, but they will still be affected for a precious few seconds. Massively strains the Psychic upon use, and increased power lets it last longer and be used much more often.

Reality Mixer
A highly unsubtle and wide-ranging ability, it rips apart and drags every hostile in sight of the Psychic, leaving them unable to move as they are torn apart. Lasting for a short while, it is capable of ripping squads apart. Any survivors however will be right next to the Psychic, leaving them in a sticky situation if they are unable to leave behind a decoy or clear the area around them.

Pulse
Shared with the Defense section, the detailed entry for it can be found in the Guardian Abilities section. Potentially more useful in the Support section to free up space for life support modules.

Here is a set of Psychic field agents, who the government has approved for being recorded for education of handlers like yourself. 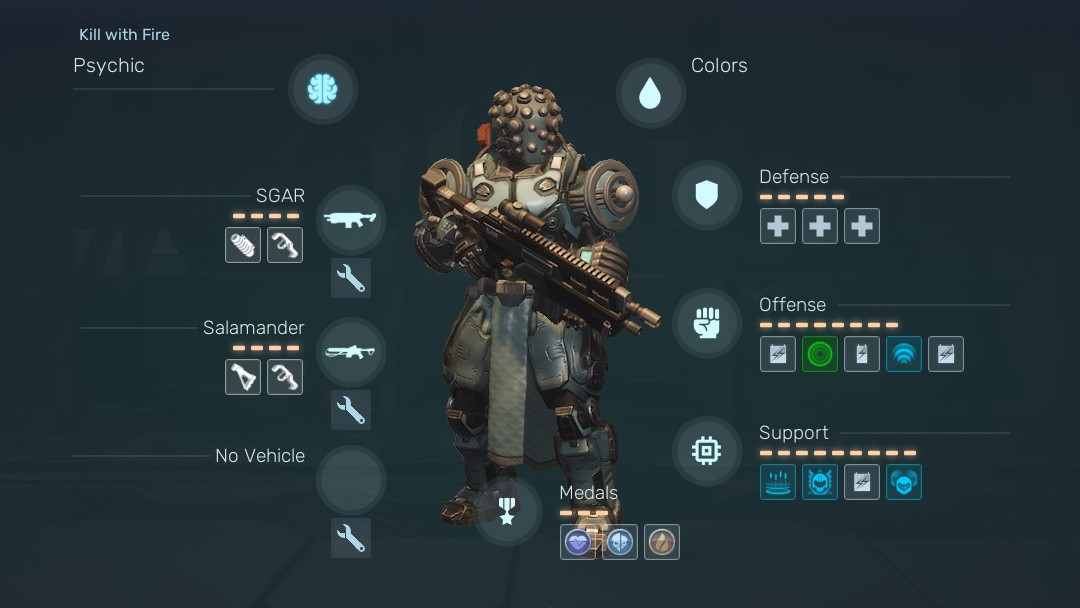 Psychic 21 “John” –
A simple Psychic operative, focusing on Psy Blast to eliminate incoming medium-scale threats while using Gravity to let the squad gun down or run from bigger threats. Shock Troopers used as constant reinforcements while Bilocation is used to enable escapes or to suppress large targets if the squad is surrounding them. 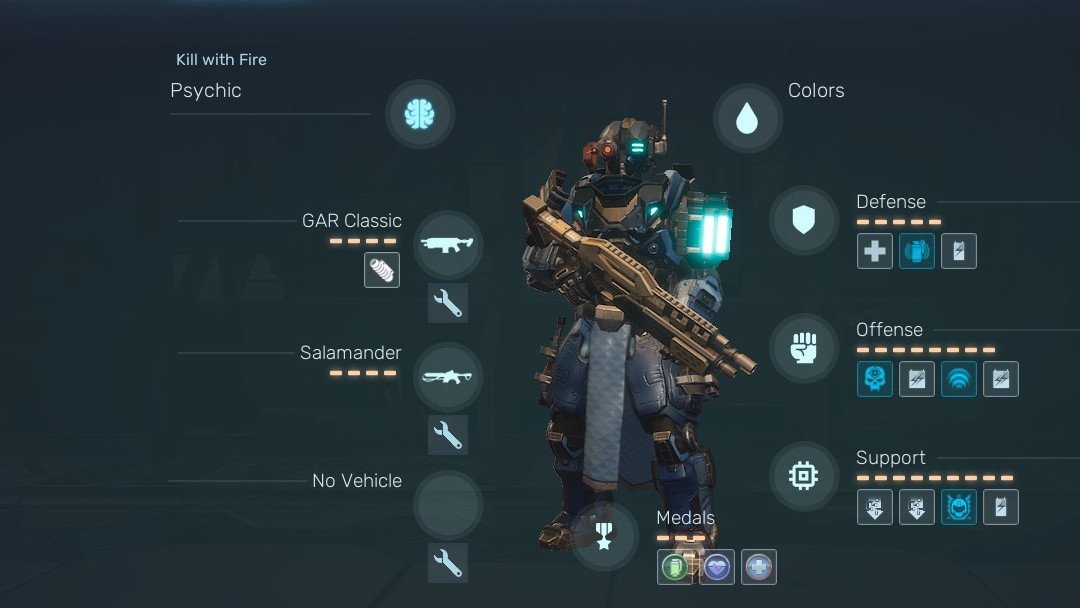 Psychic 28 “Nodder” –
A more subtle Psychic operative, using only Psy Blast as an overt power to remove enemies. Shock Troopers are called in for more focused infiltrations. Critical Strike and Smoke Grenade modules left alone generally, power may have been invested into them after Psy Blast and Shock Trooper modules were fully powered.

By Kill with Fire