Quick overview of the most basic mechanics for new players.

Starting Sector, what’s there, and what to build. 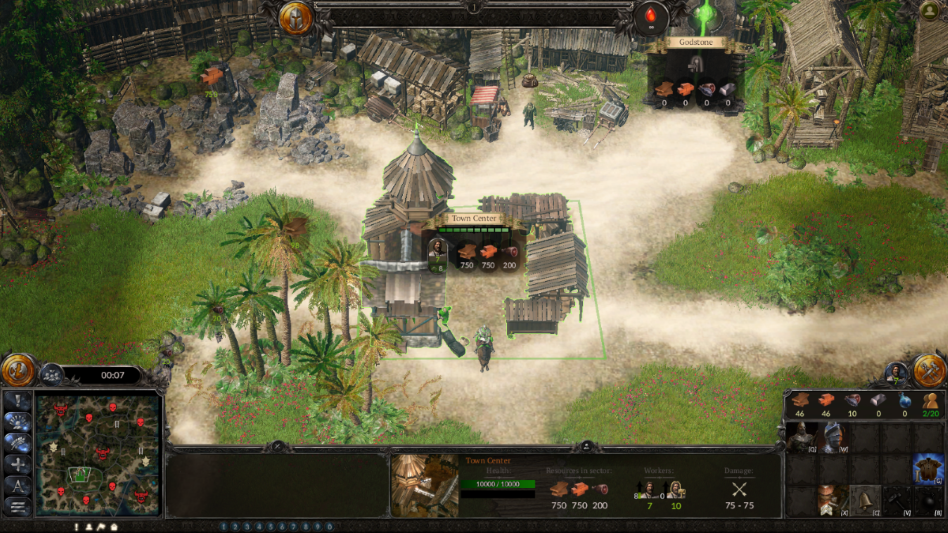 When starting your game, your first action should be to select the Godstone and start building the hero. Once you select your hero to spawn, start constructing your first buildings. If you’re not sure on what to build first, consider the costs of your buildings. If you see that all your buildings cost wood, you should probably start with 2 to 3 woodcutters and 1 hunting cabin. Apart from that, I will give you a general idea what to build and what to avoid in your main at the start fo the game:

THINGS TO BUILD AT THE START OF THE GAME:

NEVER BUILD AT THE START OF THE GAME:

Here’s a deeper explanation why you should avoid the buildings above at the start: They will simply slow you down too much. You should always start with building up your economy first, and building a tower will take away your precious workers and starting resources that could have been spent on another gathering building or an expansion. In later stages of the game, it’s fine to switch one or two of your economy buildings to a Barrack, switch Hunting Cabins to Farms once food ran out, or build some population buildings like Billets or Tribe shelters.

Apart from being your starting sector, your Town Center is the most important building in the game. Upgrading it increases your Tech Level, unlocking new units, buildings and resources.
NEVER UPGRADE YOUR TOWN CENTER TOO EARLY. The best time to upgrade it is usually once you’ve secured 2-3 sectors and fully built them. That’s around 4-8 min into the game depending on the faction.
If the win condition is capitol destruction, you will lose the game once your Town Center is destroyed. 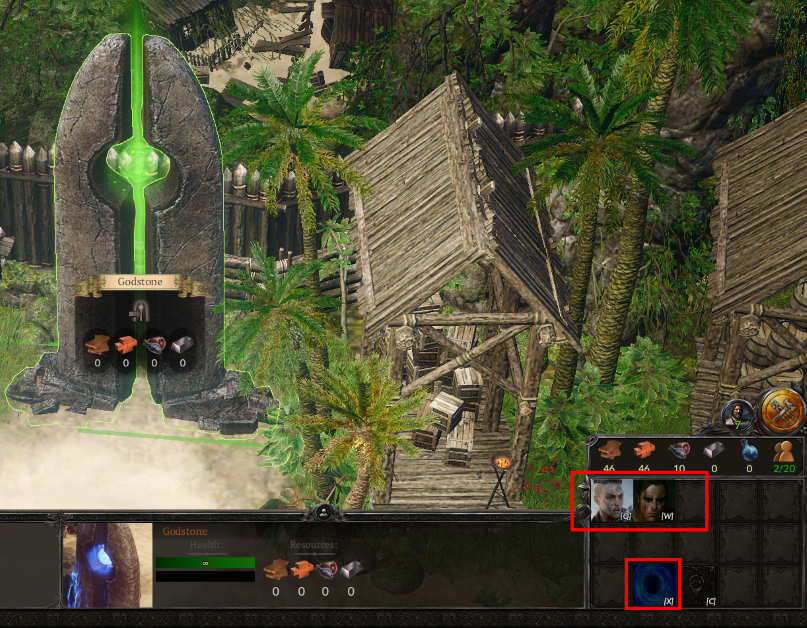 You can recruit and revive your heroes at the GODSTONES, they not only serve as hero spawners but also as portals. If you own more than one Godstone you can link them together by pressing the blue button. Once connected, both of them will open and you can send your units inside to teleport. This can also be done between you and your allies in team matches.

They are usually captured when you take control of a sector, but if the sector is not captured yet, or if the Godstone is outside one, you can take ownership of it by selecting your hero and right-clicking the stone to interact with it. Once your hero is close enough, you will take control of the stone.

Expansion
Expansion is the key to victory, every sector will provide you with extra workers, space, and new resources to use.

Each possible expansion will be marked on the minimap with the following icon:To expand, you first have to build a flag with your hero. Simply select your hero and right-click on the building spot: 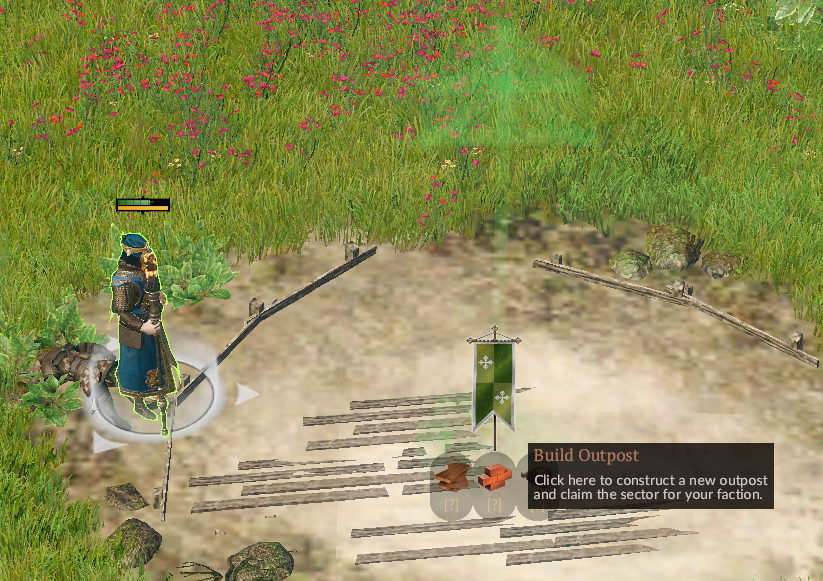 Once your hero has finished building the flag, you can select it and click the option to upgrade it to a proper outpost: 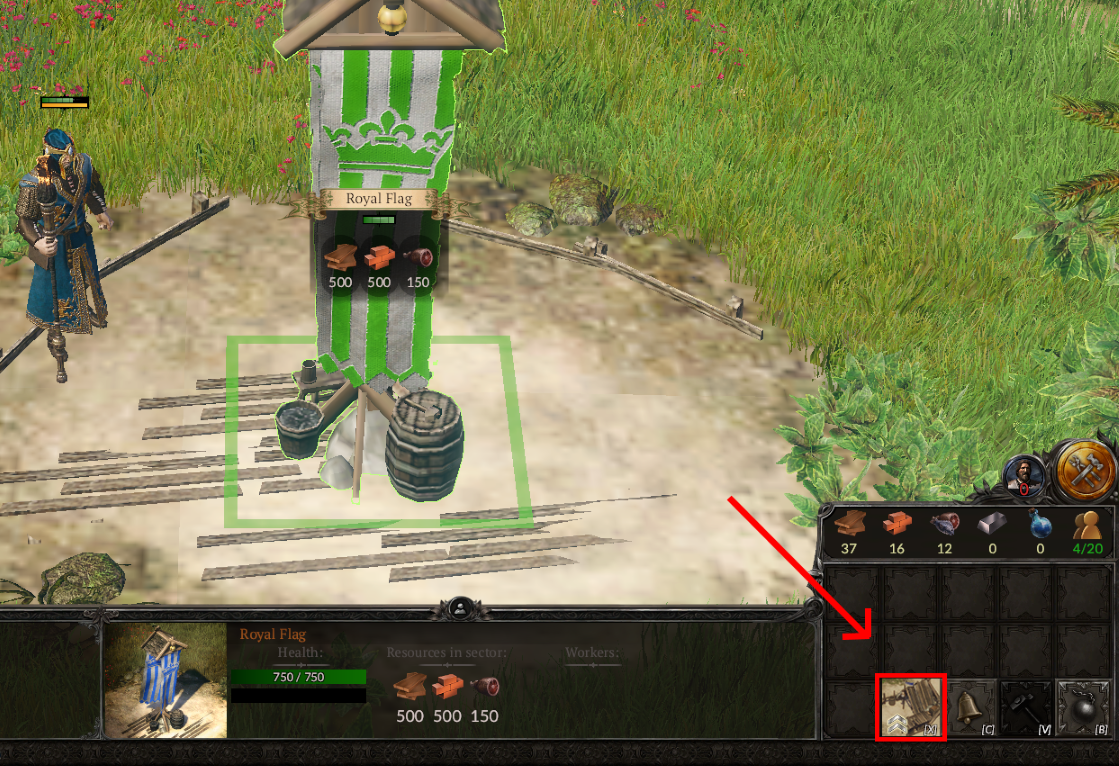 Once the outpost is built, you’ll get some workers in that sector to use. You can also queue buildings in the sector even before the flag is upgraded. Every outpost has 4 levels, each providing extra workers, outpost HP&dmg.

Be careful though, as some expansion paths are guarded by neutral creeps, they will be explained in the next section under hero leveling.

All about Heroes, part 1: Leveling.

Heroes are one of the most important parts of Spellforce. They support your armies, secure your expansion, and are often the difference between a win and a loss. Your heroes have their own abilities you can level and inventories, where you can change their equipment or give them different consumable items.

At the start of the game, your hero party starts with level 1 and 3 ability points. To level up your hero, click on the + sign on their portrait in the top left as shown on the screenshot below. You can also use K to open your spellbook. Leveled active abilities will always automatically go on to your ability bar but you can always drag them to different slots. 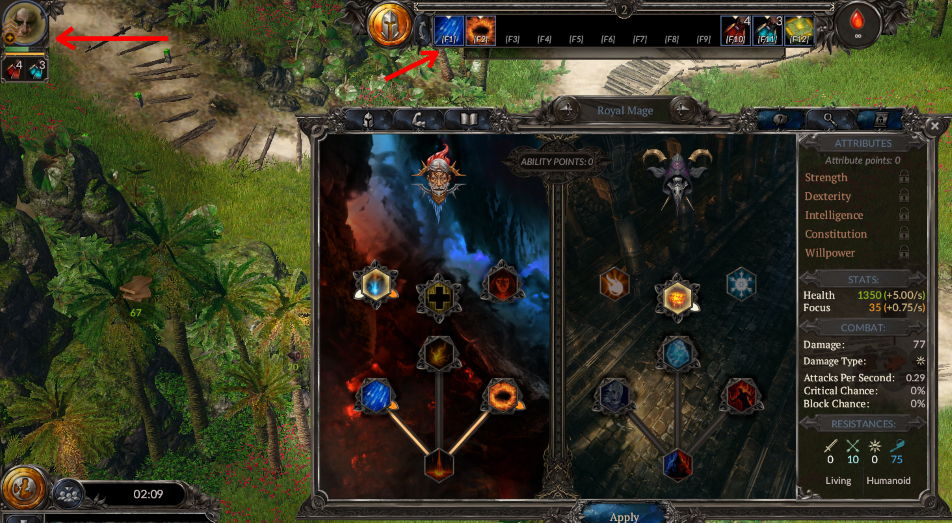 On every level up, you will get a voiced notification from your faction announcer about your heroes growing stronger. With each level, your heroes get +2 ability points to spend. The best way of leveling up is to kill heroes of enemy factions (especially if they’re higher level than yours) or killing the creeps marked on maps. There are 4 creep strength levels in the game, each with its own icon on the minimap:

The weakest groups, usually a group of 4 zombies or 3 bandits. Each group of them gives you +500 gold, bandits also drop 1 health potion.

The strongest monsters, one of the 3 golems. They give you the highest amount of XP, gold, and the best accessories available.

Apart from different strengths, they also have different aggression settings. The groups with a white skull will only attack once it has been attacked (either by you or the enemy) while the groups with the red skull will always attack.

All about Heroes, part 2: Inventory & Merchants.

Each hero comes with their own equipment. It’s usually just a weapon and armour but some heroes come with a shield and sometimes headgear but the starting hats are only there for looks and are worth 0 gold. The default button to open your inventory is I but you can rebind it.
When spawning your first hero, you will also receive the following consumables:

All consumables are shared by your heroes, the Stone of Homecoming has to be equipped and allows you to teleport to any friendly building. Including allied buildings or friendly buildings in enemy sectors. You can always get some extra consumables and accessories from the neutral monsters on the map but your main source of items will be merchants

Merchants have their own minimap icon and there’s always one in every main base. Sometimes there are extra merchants in the middle or, the sides of the map. You can trade various items with them. To trade simply right click the items you want to buy/sell then click apply. 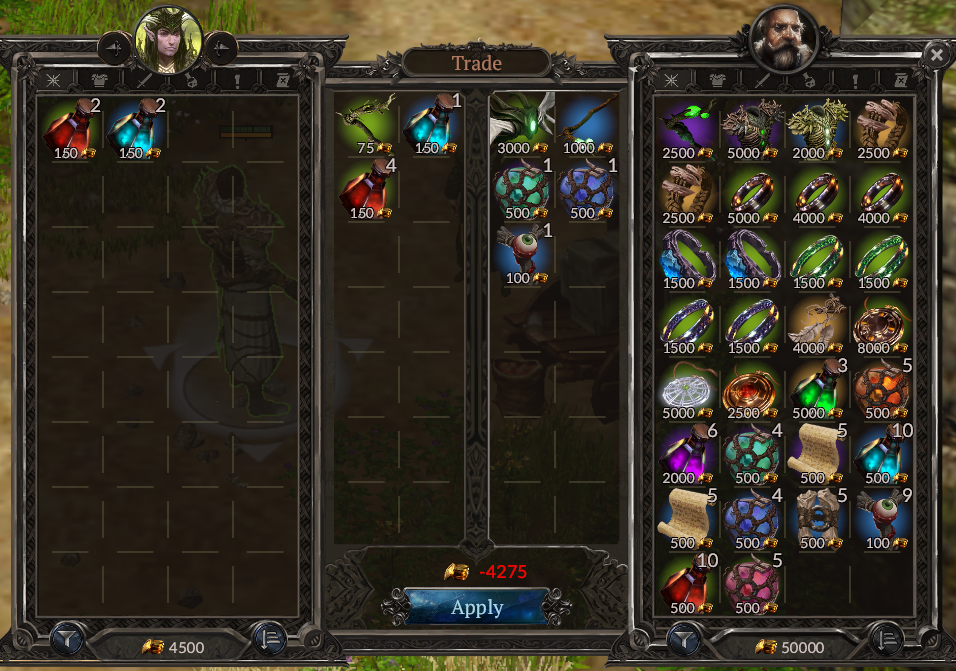 Merchants usually sell stronger versions of your heroes’ equipment, weaker versions of accessories available from creeps, 10 health&focus potions, and other various consumables like debuffing orbs or friendly summons.
They also sell some PURPLE POTIONS of fresh start, which allow you to reset your abilities and a GREEN POTIONS that give you a +1 ability point. To use them, right-click them in your inventory with your hero selected.

Once you have bought your desired items, you can open your inventory to equip them or put the consumables onto your ability bar: 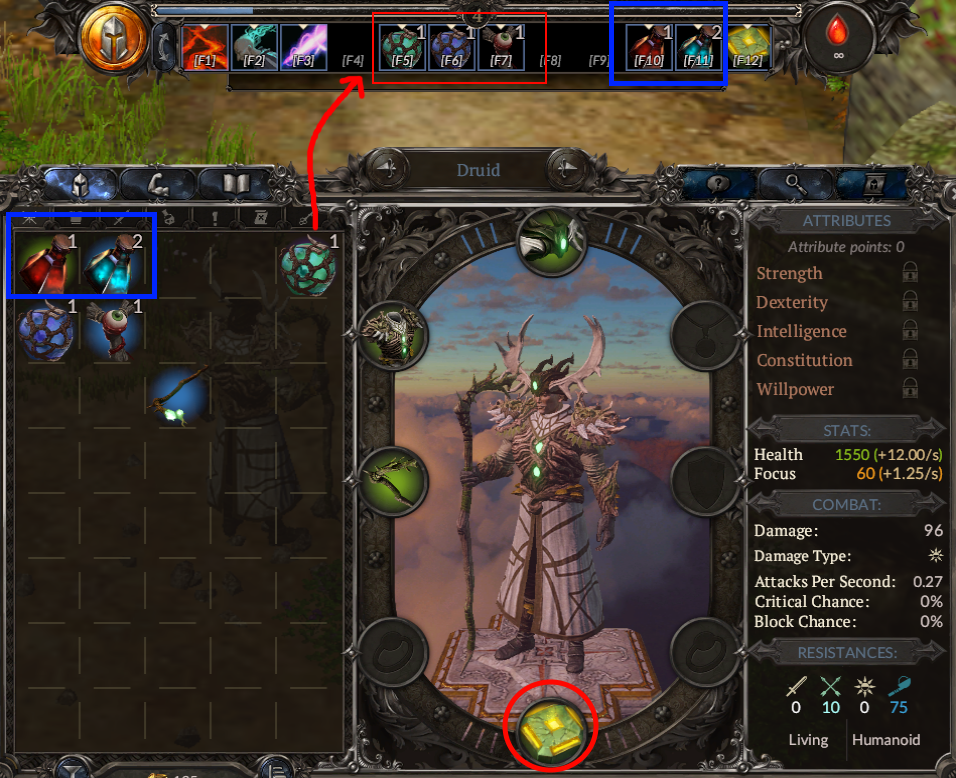 Here are some simple tips to get a little bit better at the game:

That’s all, hope this helped, have fun with the game, and good luck in your future matches!