Before we get to the walkthrough, there are some important mechanics to understand. We need to have 4 mechanics in our toolkit: Peaceful unification, wars, Cede Territory and Grant Independence. We need to understand the in and out of them to do this successfully.

To be able to declare war, you need to have an army in the declaring country. It doesn’t help if only it’s allies have an army. To declare war against non-neighbors, you’ll also need a navy. When you declare war on a country, to win the war it’s only necessary to conquer the capital. Once you’ve done that, all provinces that were claimed by any of the opposing alliance will be transferred to them and the regime in the rest will change to the winning faction. You will sometimes need to refrain from joining a war with a specific country to avoid taking territory you don’t want to.

If a capital of a country is conquered, the province with the highest population becomes the new capital. As of October 25nd, this is the only way to move the capital, and the capital will not move back even if a country regains it. This is the main trick that we will be using in this guide.

Cede territory is done through set policy, and with a single action will transfer all claims to a single country, except the capital.

Without further ado, let’s get into how we actually unify the world. 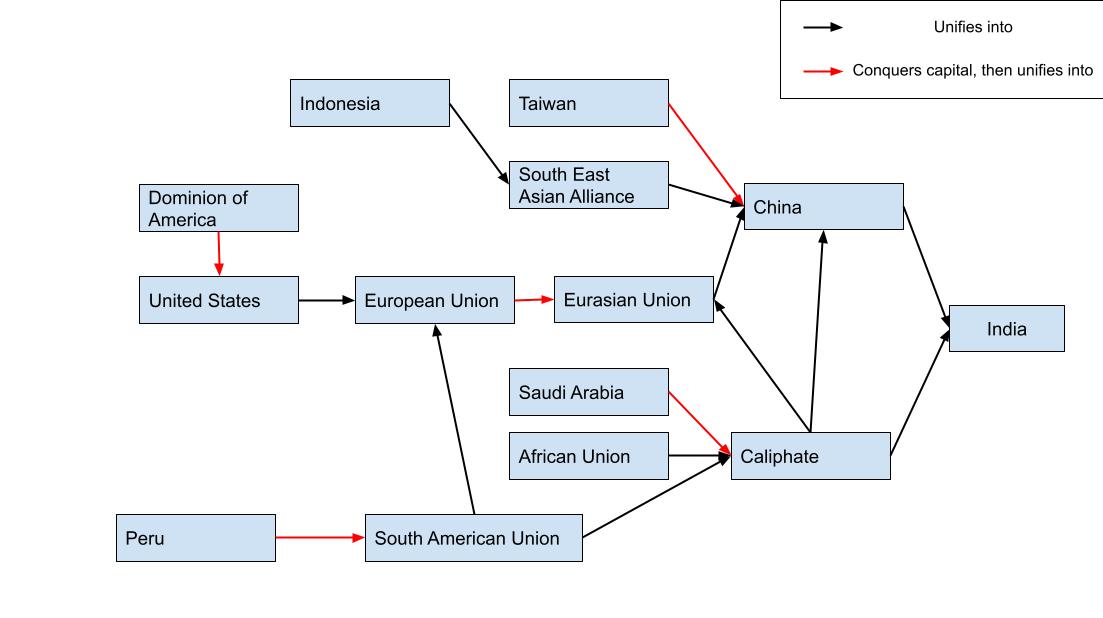 When you’re done, you will be unifying everything into India. This is the only option since nobody has a claim on the Indian Capital.

If you don’t want to conquer the entire world, just a subset of it, just use some of the branches of this tree.

The most complicated part is the capital conquests. You need to make sure that the country you are conquering is moving their capital to the right location. Let’s go through these one-by-one. In all of these cases, you can make conquest easier by gaining control of the attacked country (you probably want to do that sometimes anyways to avoid getting nuked), then ceding territory to the attacker.

Moving the US capital

You want to move the US capital to Nuuk (Greenland). This is probably the most complicated capital move so bear with me. For that you need to research United North America, which will grant you the claim on Nuuk. You also need End of the US from independence movements, which will create breakaway states with a bunch of claims. However, there’s no claim on New York at this point so you need, the capital would move there if you conquer the US now. You then need to go ahead and grant independence to the dominion. This will open the path to Greater Dominion, which will give the Dominion a claim on everything else. When all of that is ready, Cede territory from the EU to the US, cede away Hawaii and Puerto Rico, then conquer the US with the Dominion. The US capital should now move to Nuuk. Now you can start conquering and unifying North America. When you are done, unify it into the EU.

The issue here is that if you simply conquer Russia with the EU, their capital will move to Novosibirsk, which cannot be claimed by China. There is a possibility of conquering Novosibirsk with United Turkestan, but I think the easiest option is to move the capital to Mongolia. To get this done you need to research Great Europa, Forward Russia and Siberian independence movement.First gain control of Russian executive for 180 days. Make sure that Russia doesn’t have any extra territory they conquered and if they do, give it away. Grant independence to Siberia. You also need to go and conquer Mongolia (and only Mongolia). Then use the EU to conquer Russia, which should move their capital to their only province which will be left, Ulan Bator. Once you’ve done that you can unify the EU into Russia, which will put the combined capital in Ulan Bator and enable you to unify it once you got the Pan-Asian Combine and have moved the Chinese Capital.

First, gain executive control of India and cede territory to China. Then research Liberating Mainland China and conquer it with Taiwan. Do not involve India in the war. The capital should move to an Indian province and you will then be able to unify China into India when you’re ready.

First unify or conquer Korou into Bolivia. Do not unify anything else yet. Then research the Peruvian confederation and use Peru to conquer Bolivia’s capital. Once you do so you can start unifying, but you won’t be able to conquer since French Guyana doesn’t have enough population to build an army, so you have to start by peaceful unification. The alternative South America path requires doing the same with Georgetown (Guyana)

If you want to unify the whole world, don’t start at India. Unifying everything into India is one of the last steps that you will be taking, and taking India early on will cripple your ability to do more unification when you need it because of all the control points required. I recommend you start with nations that are relatively close to the leaves of this tree so that you can effectively utilize your control points.

My recommendation is to start your world unification from the EU. EU has three good things going for it as a starter for this strategy:

1. It has good research output, which is necessary for unlocking all the expensive techs that you will need.

2. It has most of its claims at game start, so you can go ahead and unify stuff before researching Unity Movements or Great Nations

3. Once built up, it should have a good military force that will assist you in speeding up unification. Use the build army priority in smaller countries. It will be rolled into the EU when unified.

Once you are ready to go beyond the EU, I recommend working towards South America or the Caliphate. You can get work started on both of these early, some of it even before Great Nations, and they don’t require an absurd amount of research to just get started like some of the other continents.

However, if you’re already into your playthrough, just do whatever first you. You can unify more regardless of where you start using this strategy.

There’s one more important question to answer with regards to unification, is it better to do so by peace of by force? The answer obviously depends on your game, but I’ll give you some reason to prefer each.

Reasons to prefer diplomatic unification:
– It doesn’t require you to have the armies and miltech necessary to conquer
– No risk of getting nuked
– You get some of the unified nation’s democracy and miltech
– You get to keep all of the conquered county’s armies
– Avoid the GDP drop from conquest

Reasons to prefer conquest:
– Faster
– No miltech penalties
– Avoid problems with holding a country for long