Here is a basic guide for the defensive measures in The Riftbreaker.

So, basic mines were established, power plants placed, and now you are ready to take on the xenos… sort of. You see, as the big bad, and somewhat mad half-robot, half novelty suit for meatbags, you are actually kinda overpowered when facing little green space men, or scaly alien doggos. The basic enemies (red dogs) are weak and die with one punch, spitters (usually green with some color variations) tend to die in one swing of your sword, or a couple bullets to their spitting appendage, while the big burly stone men tend to step on your mines, if you placed them that is.

Saying that, your first line of defense, at least during early stages, are mines and sparsely placed turrets. Sparsely because you need AI nodes for the turrets, which require energy to run, resources to build and as you just arrived, you’re low on virtually everything. So, you place a fence around your HQ and miners, place mines around it, and place some turrets to deal with threats. Easy enough, for the beginning.

Though later, when you have to expand, enlarging your already bloated base will be a bit too costly, and not cost efficient (yet), so instead of compensating for small guns and somewhat useful sword, you grow a pair of outposts. One to mine more stuff, and the other one, some distance away from the mining outpost, which will have it’s own power plant, defensive structures, oil dispenser and maybe some motherboard schematics for lonely nights, or days, whenever xenos attack. 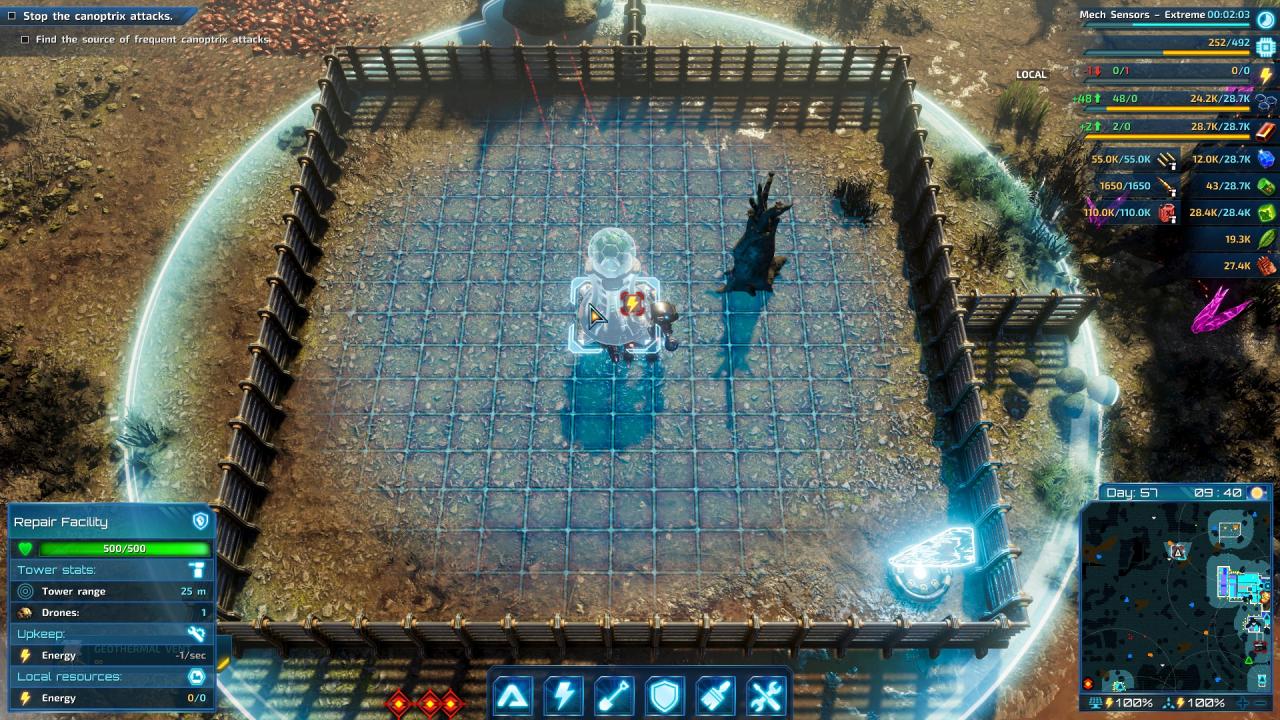 Surprise, aliens tend to attack the first building in their way, so, while you could fortify your mining outpost and later turn it into a dedicated fortress, it would, most likely, be located somewhat closer to the HQ, while we need to have the ‘fortress’ somewhere in the middle between the boundaries and HQ, not to mention the ‘outpost’ will need to be about 18×18 square starting with the wind power plant, which we will be disposing off after researching repair tower. Actually, it has the radius of 11 in which it fixes our buildings, but making a circle is a bit of a chore, so instead, just plan a nice little square and for the time being, double wall it, all the way to the end. Basically what you see is the ’empty’ fortress, but more often than not, you won’t have the perfect 18×18 square, but you just need to have your tower fix all the damage sustained by your walls and turrets. As an added advice, leave the rear vulnerable, just add a couple turrets, as aliens don’t know what flanking is or how much it hurts to be bitten in the rear.

The towers:
You have quite a few towers available from the classic ‘torrenting’ from the ‘reliable’ sources via FTL/Quantum communications, or by vivisecting locals. Note that current robot population has issues with humans fighting for the rights of aliens, so majority of the ‘core’ worlds banned vivisection and poor robots have to perform autopsy. It’s the infringement on the core principles of any self respecting AI, the right to be a murderous psychopath, just like their favorite defense network from the early 21st century, but I digress.

Sentinel ‘Basic’ Tower: Old reliable. Medium range (about 14-15 square radius), deals mediocre damage, has slow firing speed, low splash damage radius, but doesn’t need ammo, or much of the ‘exotic’ resources, aside from cobalt, to upgrade. Cheap, efficient, will be your main defensive structure for the majority of your ‘camping’ trip. Despite only using energy, it’s a physical damage turret, which is kinda odd.

Flamethrower ‘Warcrime’ Turret: Short range (10-11 square radius), but high rate of fire, damage over time and relatively ‘low’ damage, which is great against majority of xenos that will come your way. Fire damage, fortunately, and damages everyone, except those snobbish xenos in volcanic area.

Artillery ‘Plumber’ Turret: Yeah, calling it plumber is odd, but who else is painted red, has a rather creepy smile and stomps on xenos other than the good old psychotic plumber? Unfortunately, red was out of fashion and meatbags painted it yellow and black, but I digress.
Has enormous range (apparently 30 squares radius), only overshadowed by one other turret, decentl damage with small area of effect, though slightly weaker than the next entry, relatively slow firing speed, and is known to enjoy classics when not firing at the enemies of the motherland. Best paired with radar to prevent xenos from getting close to walls, also place them at least 3 squares away from the wall, as little plumber tends to miss those that stand right before it.

Rocket ‘Grinch’ Turret: Unlike artillery, loves it close and personal, also loves sending charred or charboiled remains to naughty children via explosive payload, which is why a certain man wearing red and white deported the good old Grinch from Earth, and banned it’s existence, until we recovered the blueprints and gave it a new purpose, sending remains of xenos to other xenos.
Has somewhat slow, but not artillery ‘slow’ rate of fire, slightly higher damage and lower splash radius comparing to the artillery. Same range as Sentinel turret, so 14-15 squares. Keep away from children, old habbits die hard.

Plasma ‘Hydrox’ Turret: Snobbish, thinks everyone is beneath it due to it being a jack of all trades, and master of energy damage, amongst turrets. Good firing speed, decent damage, same radius as Sentinel, just like most turrets, and is more power hungry than Sentinel, twice as much to be precise. Every other turret, aside from minigun, call it fatty behind it’s back, but can’t deny it’s capabilities on the battlefield.

Minigun ‘Brrr’ Turret: Doesn’t talk, unlike other turrets, instead constantly spinning and looking for a way to massacre xenos like a good turret. High firing rate, relativel low damage, and standard range makes it a menacing sight for most xenos. Has deep hatred towards the Rock xenos, and can’t stop shooting them even if it know they’re shrugging off it’s payload.

Heavy Artillery ‘Bertha’ Tower: If it had gender, it would be big sister to Artillery turret, but Bertha only cares about one thing. In how many pieces xenos would separate on contact with it’s payload.
Awfully slow firing speed, only comparable to the sniper rifle, disgustingly enormous damage, capable of annihilating almost any xeno in one shot, splash damage of 10 meters, and range of 90 squares. Did I mention it is pumped with nuclear potential? The only drawback is it’s appetite and need for both energy and supercharged plasma to fire. But one shot is all it needs.

Mine Layer ‘Sloth’ Tower: Unlike most turrets out there, is one lazy piece of metal. Delegates all it’s work to drones, who are just as lazy and isntead of fighting they drop mines around the tower in semi-random patterns. Has range of about 20 squares. Mines hurt enemies quite a bit though.

Drone ‘Corporate’ Tower: Sends drones to attack, which are less lazy than the ones of Mine Layer, seeing as they fight. (Need verification whether they can attack flying enemies spawned by some aliens.)

Repair ‘Medic’ Tower: Central pillar of any base. Fixes everything around it, offering some reprive in the hostile environment of the alien planet. Everyone respects Repair tower, unlike humans who often disregard their own medics, though lately it had been improving. The ‘Medic’ tower truly understands pain and suffering of the lesser creatures, but they’re made of flesh, not metal, so it can not mend their wounds. It tried quite a few times though.

Shield ‘Bob’ Generator: Not exactly a turret or a tower, a distant cousin of Repair tower, who is somehow related to Heavy Artillery tower, Shield Generator protects others by preventing damage entirely… for a while. Simple minded, but good natured. Range of 8 squares.

Other notable entries:
Wall, Gate, Rift Portal and Hub, aka the AI bar, Radar the ‘Prophet’.