If you want to make the excuse “I have to run these floodgates”, and be right, Metaphys is right for you!

(If you have any suggestions, additions, or would like me to make changes, feel free to suggest.)

What exactly is the Metaphys archetype, what does it aim to do, and what is their win-con?

Metaphys is a banishing archetype, where you aim to banish most of your Metaphys monsters, as they have effects that go off (when banished) during the next standby phase (every standby phase, not just yours).

The win-con can vary depending on how you build your deck, but for now we’ll say it’s a grind-game deck where you basically try to pull the rug out on your opponent (you’ll understand more later) and to accumulate resources (which it’s good at doing).

(There will be a level beside each monster)

Metaphys Decoy Dragon – The only Pendulum of the archetype, with both of the effects being the same thing. When any of your monsters are targeted for an attack (even if they’re not Metaphys), you can banish him to special summon a banished Metaphys card. He comes back during every standby phase as well, meaning you can continually cycle and prepare. [2]

Metaphys Ragnarok – Ragnarok is an amazing starter and something you’ll always want access to, as when he’s normal/special summoned he can banish the top 3 cards of your deck. This can get your plays going to further extend your plays for next turn (or help you banish key cards, like Necroface). [4] [Tuner]

Metaphys Daedalus – Daedalus is an important card for the archetype for a few reasons, mainly because when he’s special summoned by the effect of a Metaphys monster, he can banish all other special summoned monsters, making him good for clearing out monsters. During the standby phase you can shuffle him back into the deck and then banish 1 Metaphys card from your deck (more on why this is useful later). [7]

Metaphys Tyrant Dragon – Tyrant Dragon is kind of the “unga bunga” of the archetype, as when summoned by the effect of a Metaphys monster, becomes unaffected by Trap effects and if it attacks a monster, can make another attack. During the standby phase, you can shuffle him back into the deck and special summon 1 Metaphys monster from your hand (but it gets banished during the next End Phase). [8]

Metaphys Nepthys – Nepthys is Daedalus but for set spells/traps (including your own), meaning when summoned via a Metaphys monster’s effect, can banish all set spells/traps. During the standby phase, you can shuffle him back into the deck and add 1 Metaphys card from your deck to your hand (which, if you banish 3, is 3 searches for that standby phase). [8]

Metaphys Executor – Executor is a hit-or-miss, as usually he’s more of a garnet than anything else. He has to be special summoned (from your hand) by banishing 5 Metaphys cards with different names from your field (face-up) and/or your GY, but is he worth the hassle? He can’t be destroyed or banished by card effects (he is a 3k beatstick), and if your opponent controls more cards than you do, you can special summon a banished Metaphys monster (which gets banished during the next End Phase). I’d consider him the weak link of the archetype. [10]

With a proper setup you will rarely, if ever have a Metaphys card in the GY, meaning you’d have to commit 5 different on-field resources to special summon him (so you will more than likely have to banish your spells/traps as well).

Metaphys Horus – Horus is a Synchro monster that has different effects based on what you used to Synchro summon him with.

Usually you’ll Synchro summon him with Decoy Dragon and Ragnarok, allowing you to negate a face-up card and snatch a monster away from your opponent. 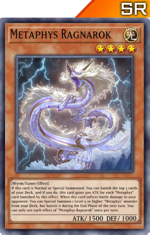 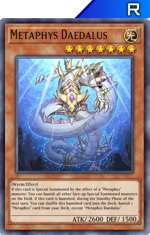 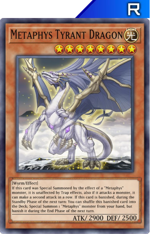 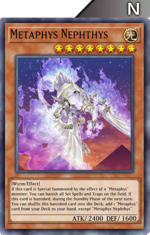 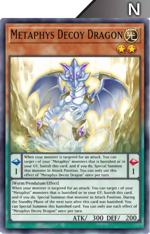 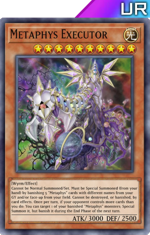 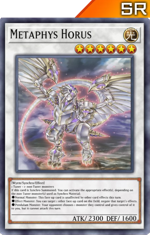 Asymmetaphys – Asymmetaphys is a fantastic card all-around, you can banish 1 Metaphys monster from your hand (and draw 1), allowing you set up for next turn, and you can have (and activate) multiple on your field. If a Metaphys card (not limited to Monsters) is banished, you can use one of these effects:

You mostly use it for the banish + draw 1 effect, but if you have multiple (say, 3), you can at max decrease your opponents monsters ATK/DEF by 1500.

Metaphys Factor – The field spell of the archetype, but don’t let its Normal card rarity fool you, it’s pretty decent. You can Normal Summon (can’t Set) 1 level 5 or higher Metaphys monster without tributing (banish it during the next end phase), which is nice but you mainly use it for its second effect. Your opponent can’t activate cards or effects in response to your Metaphys monster’s activations, allowing you to pull off uninterrupted plays. Special summon Daedalus, banish all special summoned monsters your opponent controls, and they can’t do anything. 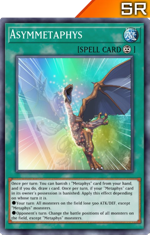 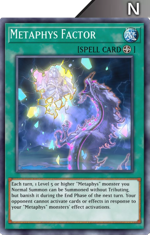 Metaphys Ascension – The main target to be banished by Daedalus’s effect, since when it’s banished, can search out any Metaphys card (except itself). If you set it, however, you can discard 1 card, draw 1 card, and then banish 1 card from your deck. If you do decide to use its discard effect, make sure you have ‘Macro Cosmos’ or ‘Dimensional Fissure’ up to get the most out of it.

(Note: For ‘Metaphys Ascension’, you can only use 1 of the effects per turn, meaning if you decide to discard 1 and draw 1, you won’t get the search if it gets banished by something like ‘Macro Cosmos’).

Metaphys Dimension – (Each of these effects are once per turn) If your opponent special summons a monster, you can special summon 1 banished Metaphys card (but banish during the next End Phase). If a Metaphys card is banished (this has to already be face-up), you can target 1 card your opponent controls and banish it. It’s easy to pull off and can help out when it becomes a grind game (as well as help get rid of problematic cards). 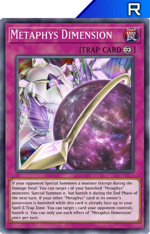 Metaphys seem pretty easy to learn and play (and for the most part, it is), but you’ll still want to properly manage your banished resources. For now, we’ll start off with cards that should be on your radar if you decide to build them:

Aloof Lupine – Lupine is a no-brainer for Metaphys, as he can banish 1 monster from your hand (for cost, so even if he gets negated you can still set up a play), then you can banish 1 monster from your deck with the same Type as that monster (which also makes him useful for Necroface plays). If he’s destroyed by card effect or battle, you can add 1 of your banished monsters to your hand.

Necroface – Necroface is a staple in banish decks, as when he’s banished, he banish the top 5 cards of both player’s decks, allowing you to get the ball rolling even faster (+ bonus points if he banishes another Necroface). If Normal Summoned, can put back all banished cards into the deck and then gains 100 ATK for each card (which can be a full reset for this deck).

Nemesis Keystone – Keystone is good for multiple reasons, he can special summon himself by shuffling 1 of your banished monsters into the deck (such as Metaphys Ragnarok, which doesn’t have a banish effect), and during the end phase he was banished, adds himself back to your hand.

Dimension Shifter – If you’ve played against Floo, you know what this card does. You won’t always have access to your Continuous floodgates and won’t be able to set them up going 2nd even if you did, making him very valuable in Metaphys. If you have no cards in your GY, you can (quick effect) send him from your hand to the GY, and until the end of the next turn, every card is banished instead.

Metaphys start off slow, but that doesn’t mean you don’t have any plays until the next Standby Phase, for example: