Kozmo can be a fun deck to play around with, but getting started can be a bit tricky.

Kozmo is an archetype based on Star Wars (which you already knew), there’s a lot to the deck that makes it a bit more fun than traditional banishing decks like Metaphys, or rather changes the formula. Note that since they’re an archetype based around banishing, your GY will usually be empty, keep that in mind. Kozmos revolve around 2 main types:

Psychics Psychics mostly have 2 main functions; to banish themselves to summon higher level monsters from your hand (quick effect), and paying a life-point cost to activate their effects.

Machine – Machines are going to be your main boss monsters, where they all have “if this is destroyed by battle or card effect” text, making it easier to special summon other lower level monsters from your deck.

This is more of a showcase of what each card in the archetype does and not so much an explanation for the deck I’ve built (but there will be a decklist below).

[If anything can be improved or changed, let me know.]

NOTE: I’ll be putting a [X] star-rating so you can tell what special summons what.
Psychics

Kozmo Tincan – Tincan is also a main searcher, during either person’s end phase, you can excavate 3 cards from your deck, your opponent picks one, and you send the other 2 to the GY. Although getting a random card based on luck can seem pretty bad, your main big boy Dark Eclipser can use them for fuel (on that later). [1]

Kozmo Scaredy Lion – Lion can be a versatile card, though his uses are limited (you can use him to reset ‘Dark Eclipser’s’ trap negation fuel or use it after ‘Dark Planet’. [2]

Kozmo Strawman – Strawman is a very useful card for the most part, he can special summon one banished Kozmo monster (their effects are negated, but you’ll ideally use him on a higher level monster like ‘Dark Planet’ or ‘Dark Destroyer’) to deal some damage (and you can still use his banishing effect after to get another body on field). [2]

Kozmo Farmgirl – Farmgirl is a card that you want in your Kozmo deck no matter what, she can be a searcher for your other Kozmo cards if you inflict battle damage (she only has 1500 ATK, which isn’t a whole lot, but her versatility makes her great). It depends on the situation, but you can inflict damage, grab a card (let’s say a Kozmo Dark Destroyer), banish her, and then pop in Dark Destroyer to inflict more battle damage, as well as potentially getting another pop using your boss monster. [3]

Kozmo Soartroopers – Soartroopers is the card you want in hand if your Psychic is somehow destroyed (maybe your ‘Dark Lady’), you can pay a 1000 LP fee to special summon it from the GY. [3]

Kozmo Goodwitch – Goodwitch is useful for getting rid of equips and/or some ATK/DEF boost and making it possible to swing over monsters with lower defense than your ATK. You can pay a 500 LP cost to change any 1 card to face down position. [4]

Kozmoll Wickedwitch – A personal favorite as she has the most staying power in the archetype, you can pay a 1000 LP cost to make her unable to be destroyed by battle or card effects. Ideally you special summon her to hold out if you don’t have cards you can use currently. [4]

Kozmoll Dark Lady – Dark Lady can win you a few games alone, she can (quickie) negate a monster’s effect activation and destroy the monster that activated it. [5]

Kozmo Delta Shuttle – Good for fueling your GY and swinging over your enemy, but the weakest link of the archetype in my opinion. It can send one monster from your deck to your GY and decrease your opponent’s monster ATK/DEF by the level amount x100. [5]

Kozmo Sliprider – Sliprider is a decent card, on special summon it can pop a spell or trap on the field, so ideally you’d use a Psychic monster during the end-phase (or whenever you need to) to pop whatever they set. [5]

Kozmo Landwalker – Landwalker is an ideal card if you have something like ‘Kozmo DOG Fighter’, he can protect your weaker cards from destruction, at the cost of destroying one Kozmo monster you control. [6]

Kozmo DOG Fighter – DOG Fighter can spawn token clones of itself (2000 ATK and 2400 DEF) during each standby phase, making him ideal for getting more bodies on field in order to build a wall while you build up materials or to go for game with them. [6]

Kozmo Forerunner – Forerunner is a card you shouldn’t expect to have on the field for longer than 1 or 2 turns, as it allows you to gain 1000 LP during each of your standby phases. He’s useful nonetheless due to his higher level. [7]

Kozmo Dark Destroyer – Dark Destroyer is also a must-have card for this deck, as he can pop one monster on the field when summoned (it does target), it also have some protection, meaning he can’t be destroyed by battle or effects. One of the cards you’ll be seeing the most. [8]

Kozmo Dark Eclipser – One of your main boss monsters, he’s the card you’ll usually want on the field for a few reasons. Aside from not being able to be targeted by card effects and being a big beat-stick at 3000 ATK, he can negate and destroy trap cards that activate their effects (so long as they’re not already activated before), so long as you have Kozmo monsters in the GY. This is not once per turn. (Machine) [9]

Kozmo Dark Planet – The big bad beatstick of the deck, with 4000 ATK and targeting protection he can be useful, but he can also be a bit of a garnet. You can special summon him by banishing Kozmo monsters in your hand that equal 10+ stars. The main reason you’ll want him is because he’s the spell version of ‘Dark Eclipser’, where if they activate a spell you can negate and destroy it, but only if you have Kozmo monsters in the GY. [10]

Kozmo Lightsword – Not the worst card ever, but it’s uses are pretty limited and its uses don’t make it worth it enough to put in your deck (in my opinion), but it does increase a Psychic’s ATK/DEF by 500, give piercing, and allow you to attack twice instead of just once. Best use is with ‘Kozmo Farmgirl’ since her effect isn’t once per turn, netting you 2 potential Kozmo cards.Kozmotown – This field spell is the best of the traps/spells since it only has benefits; it allows you to put 1 banished Kozmo back into your hand (you do take LP damage based on how the level of the monster x100), acts as a Kozmo ‘Magical Mallet’ letting you reveal Kozmo cards in your hand, shuffling them into your deck and drawing however many you sent that way. On destruction it can add any Kozmo card from your deck to your hand (it can even search itself).

Kozmojo – Not a bad card by any means but it’s a hard once per turn cutting down it’s uses. It allows you to destroy one Kozmo monster you control (ideally a machine) and banish 1 card they control or in their GY (making it very versatile and useful).Kozmourning – A decent trap card, monsters destroyed by battle with Kozmo monster you control are shuffled into the deck instead of the GY, making it very useful in certain situations. It’s second effect allows you to banish itself from your GY and any battle damage you’d take from battles that turn, turn into LP instead. You can use this effect with tincan (or another weak monster) to gain whatever life points you need in tight spots. 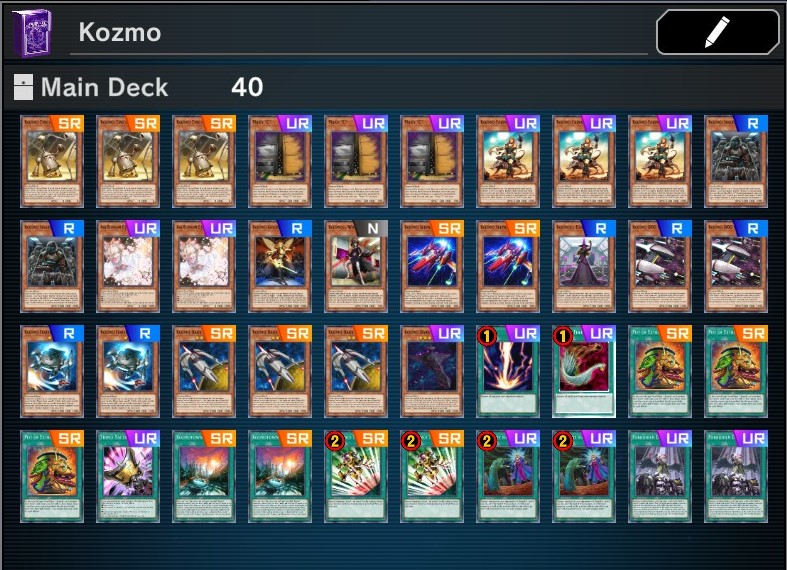 Once you get the hang of the archetype you’ll find it’s extremely versatile, but it does have it’s issues and it’s strengths. You can take your own playstyle based on what you put into your deck but here are some things to consider: