Yu-Gi-Oh! Master Duel is the way to play Yu-Gi-Oh! if you’re looking for an entirely online experience. Since it doesn’t use any physical cards, access to staple cards is available for everyone at an affordable price. All you have to do is either craft or open them in a pack, which is very easy to do in Master Duel.

For the unaware, a staple card refers to a card that is generically powerful and can be played in any deck. Most commonly, these are cards that interrupt the opponent on their turn or allow your deck to become more consistent. These are cards that every deck can benefit from, so if you need to fill up space they are the cards for you.

10 Best Staple Cards For Any Deck 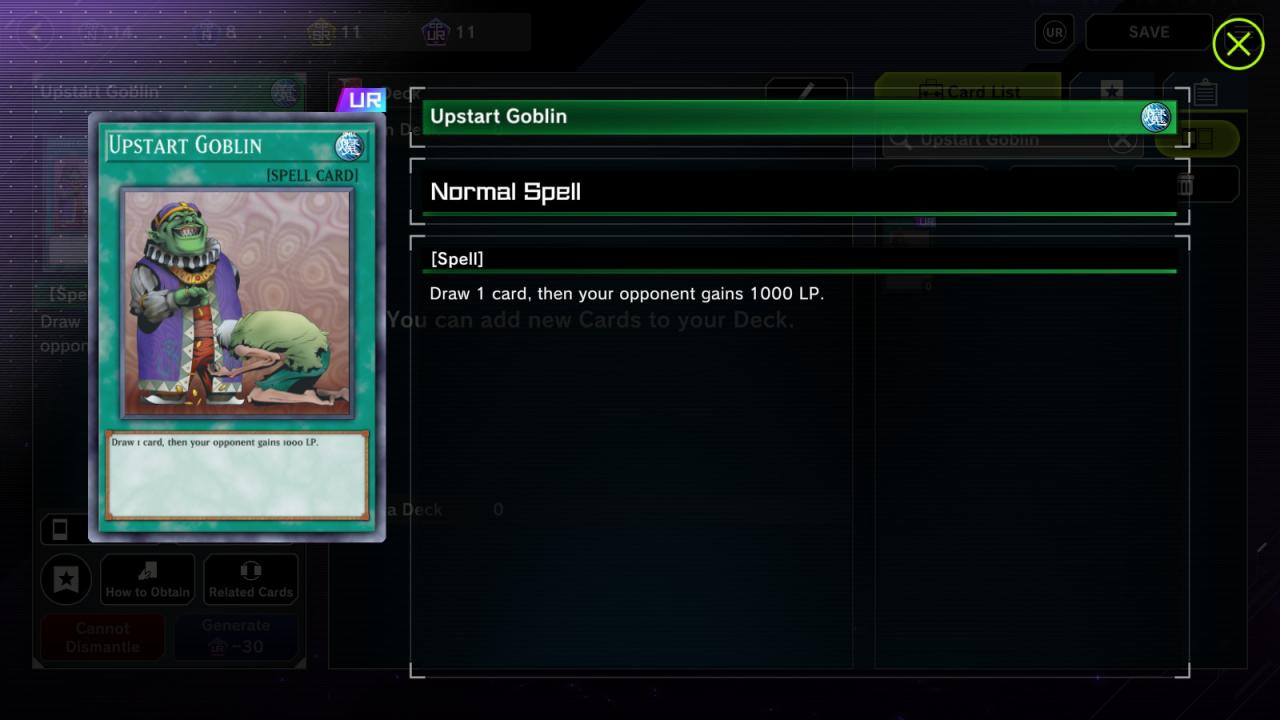 Upstart Goblin is an incredibly simple card. At the cost of giving your opponent 1000 Life Points, you get to draw a card. While this doesn’t seem amazing at first glance, it’s actually so good it’s Limited in the TCG to just one copy per deck. Since Master Duel uses the OCG banlist, you have access to the full three copies.

Drawing cards in Yu-Gi-Oh! is the best effect in the game because of how important card advantage is. Upstart Goblin essentially allows you to run a 37 card deck, as you can use it to essentially get closer to the cards that you actually need to start your plays. 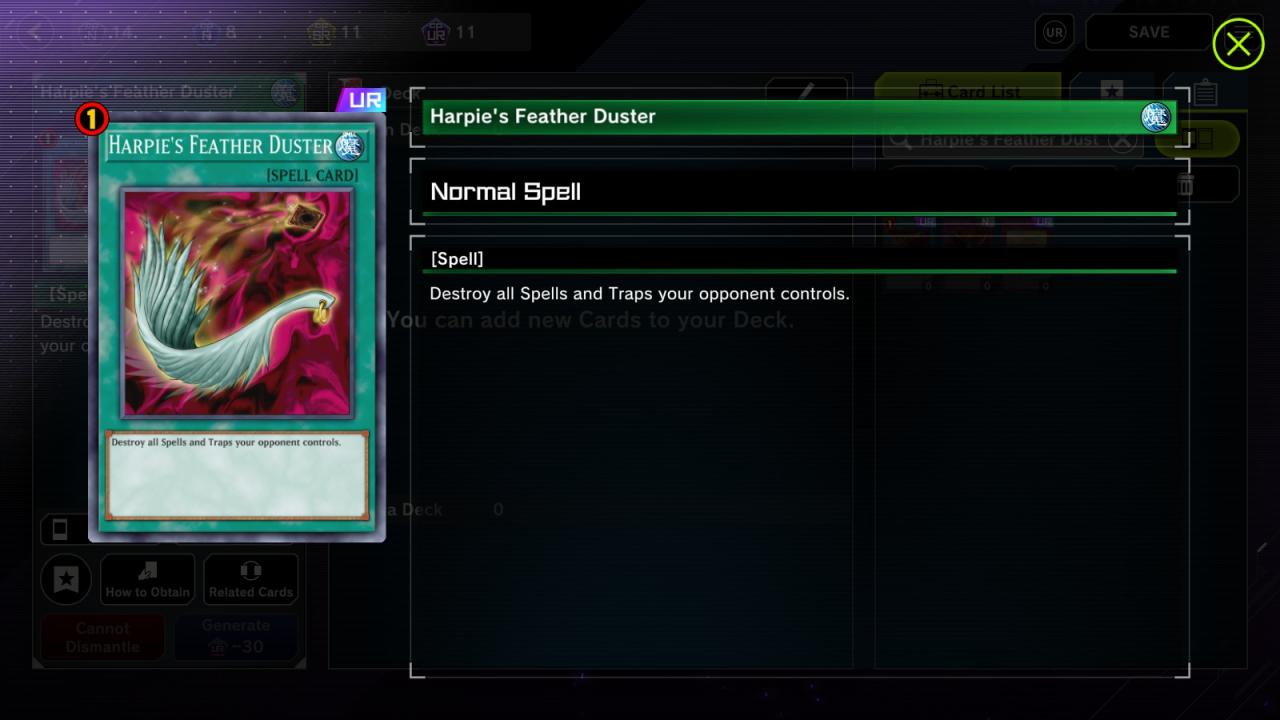 Harpie’s Feather Duster has been in the game since the earliest days of it, made iconic by Mai’s use of it in the anime. It’s another card with a simple effect, one which can destroy the opponent’s backrow for no cost or activation requirement.

8. Called By The Grave

Called By The Grave is the staple Quick Play Spell card for combo decks. It can be used to banish a card from the Graveyard to negate the effects of the Monster it banishes for the rest of that turn.

Since it’s a Quick Play, Called By The Grave is key in stopping hand traps, which are all over the place in Master Duel. Not only that, but it can permanently take care of a problem Monster that is trying to be brought out from the Graveyard. Called By The Grave is semi-limited for how good it is, and a great staple card for any deck. 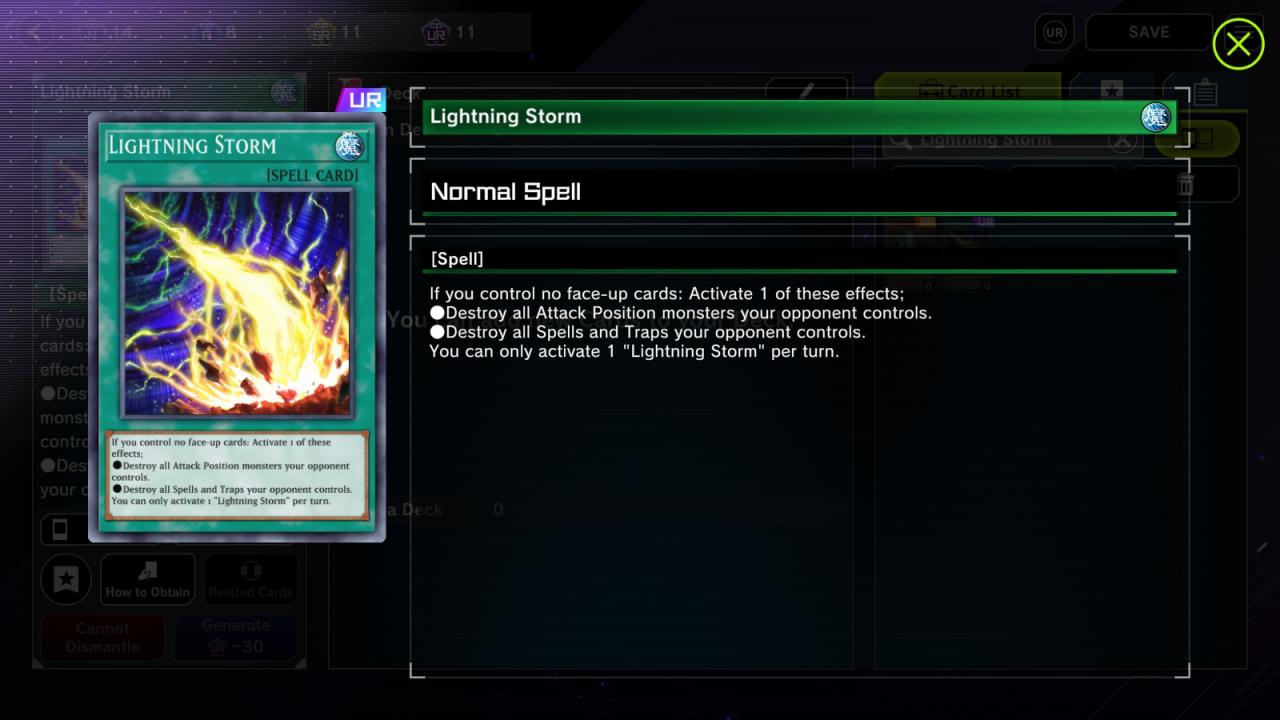 Lightning Storm is the ultimate going second card. So long as you control no face-up cards, it can be activated to destroy either all backrow, or all Attack position Monsters the opponent controls.

Since you’ll be using this at the start of your turn, its activation requirement hardly ever comes up. Having a versatile board wipe is incredibly good. It’s especially should since there’s not a single deck out there that hurts from running it. In Master Duel, you never know if you’ll be going first or second, so it’s important to always be prepared.

6. Nibiru, The Primal Being 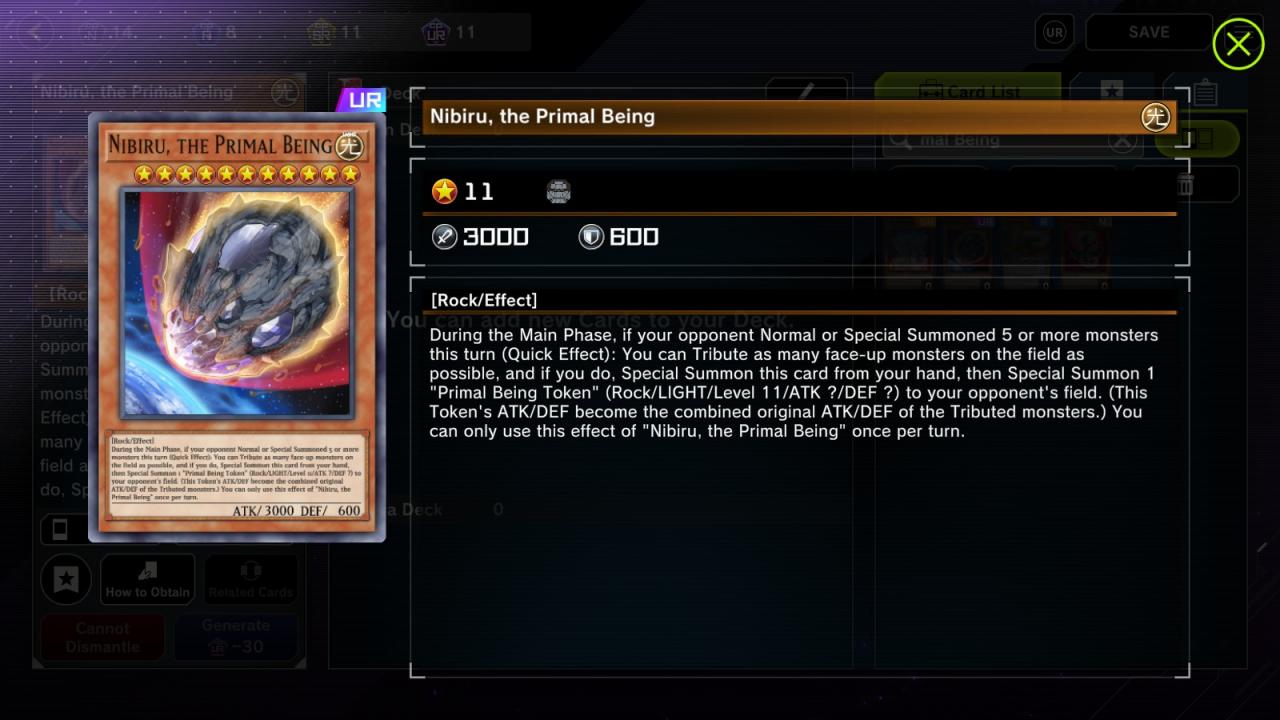 Nibiru, The Primal Being is the ultimate punish to combo decks. Whenever five or more summons accrues, you can special summon it onto the field while tributing the entire board away, leaving the opponent with nothing more than a Token.

It’s a staple card due to how many combo decks run rampant in the Master Duel meta. While the Token may have high stats, practically every deck in the game can find an easy answer to take care of, making it a non-issue. On your field, you can use Nibiru, The Primal Being as a 3000 Attack body, or as Extra Deck fodder. 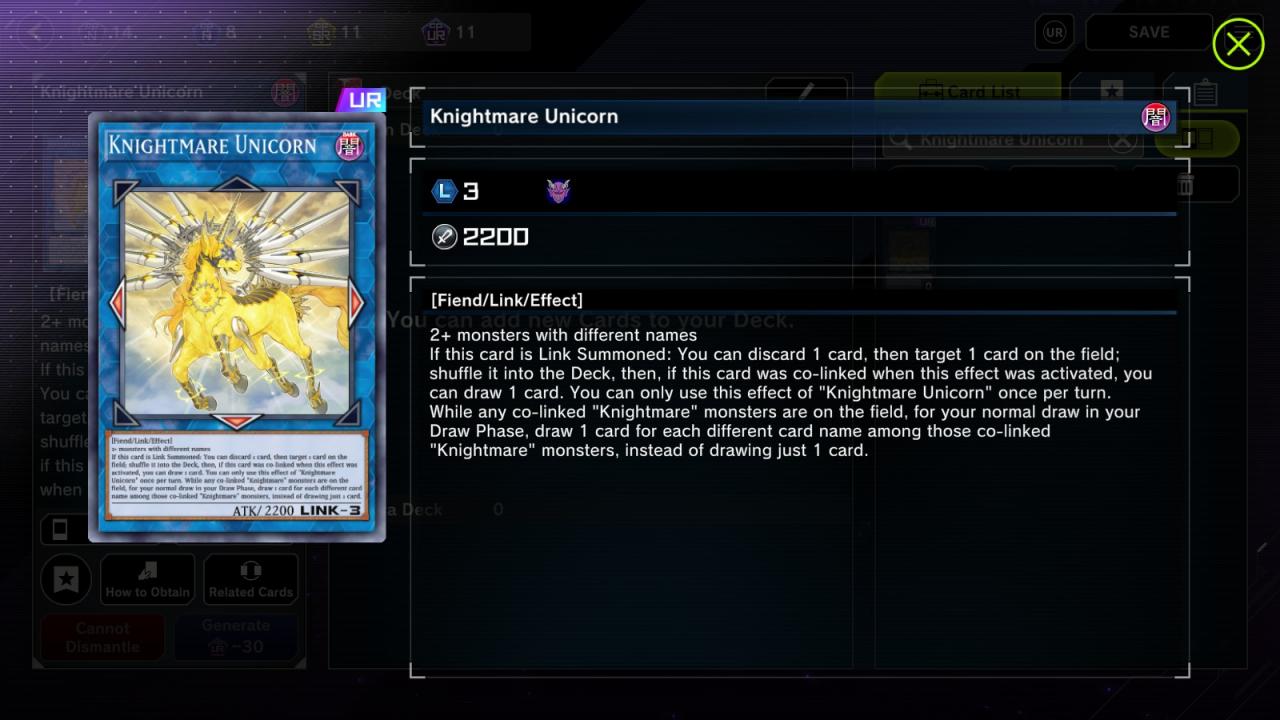 Knightmare Unicorn is one of the most played Link Monsters in the entire game. It’s a Link-3 that requires generic materials, meaning every deck can run one in their Extra Deck.

Shuffling a card away into the deck is one of the best forms of removal in the game. It gets around indestructible effects, and can even return Extra Deck Monsters to there in order to make the resources that went into them useless. Knightmare Unicorn can even be brought out during the opponent’s turn thanks to cards like I:P Masquerena. 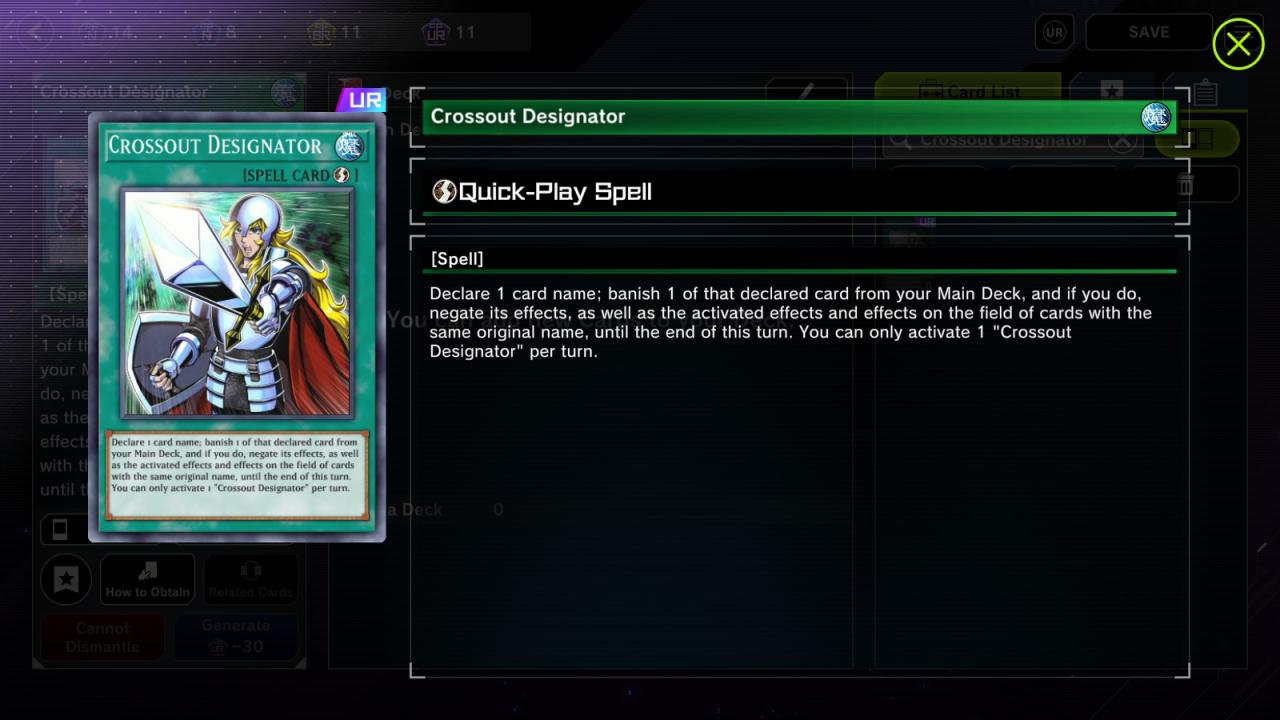 With how many hand traps are a part of the Master Duel meta, Crossout Designator is one of the key cards to ensure your deck doesn’t fold to them. So long as you have a copy of the card being used in your deck, you can negate that effect.

Since many decks run the same hand traps due to the meta, odds are you’ll be able to use Crossout Designator to its full potential. It even comes in handy during mirror matches, as you can shut down the opponent’s deck with it as well. 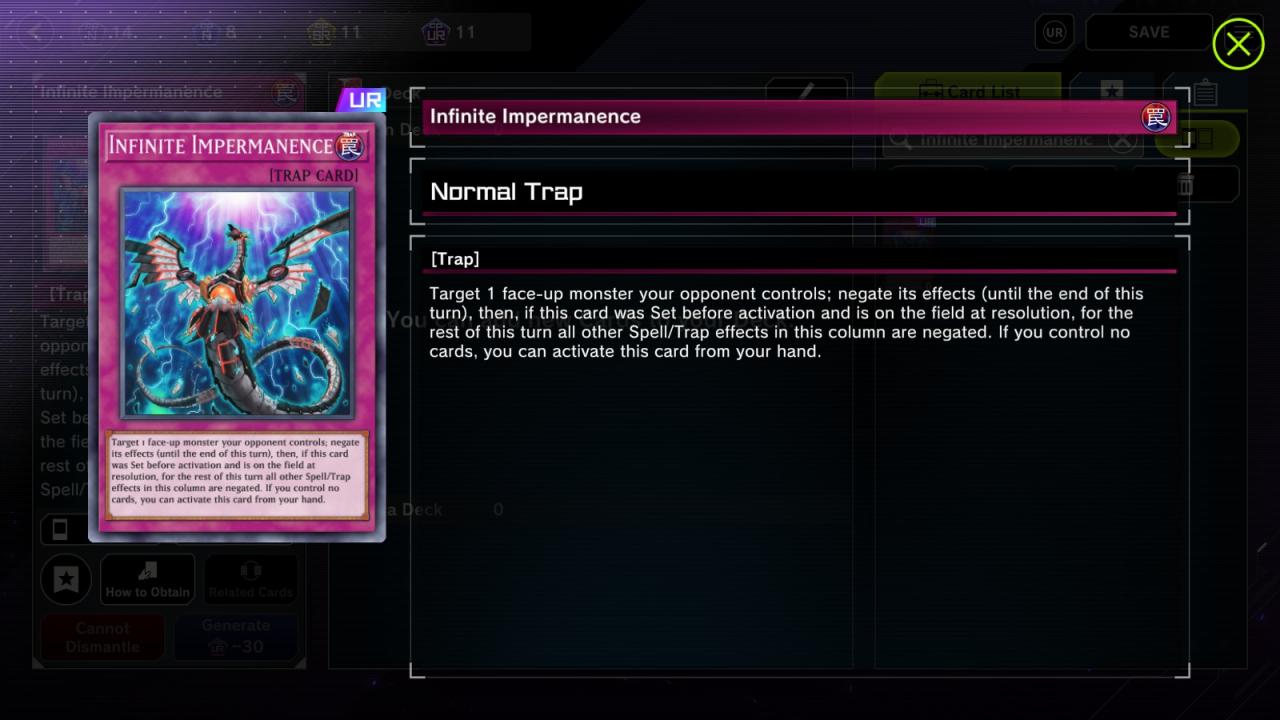 Infinite Impermanence is one of the best trap cards ever printed, and it’s most certainly a contender for the best Normal Trap in the entire game. Its effect is simple, it negates the effect of a Monster that’s face-up on the field. What makes it good is that, unlike many other Trap cards, it can be activated from the hand (so long as you control no other cards).

Even if you do have to Set it, it will permanently negate any card used in the column for the rest of that turn. This means it can be used to turn off problematic Floodgates, as well as get a negate of both a Monster and Spell or Trap card with one activation. 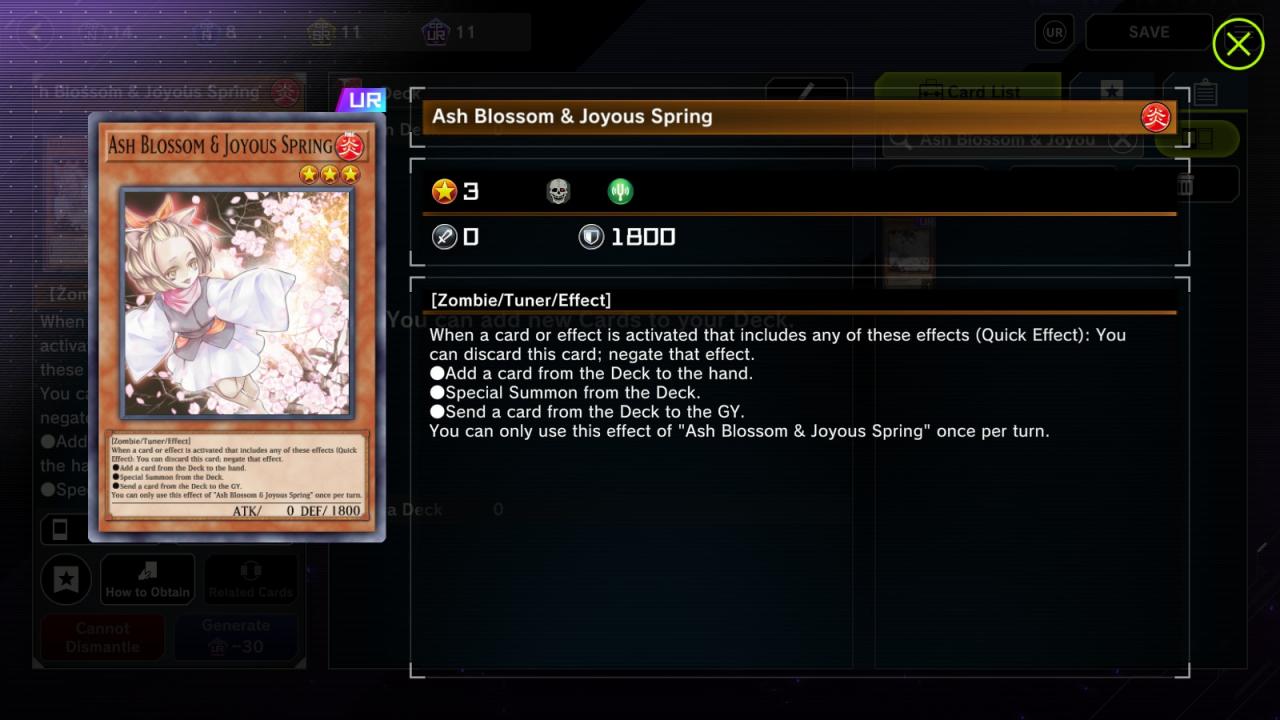 Ash Blossom & Joyous Spring is one of the most played hand traps in both the TCG and the OCG. Essentially, it completely shuts off an effect that moves a card from the deck to anywhere, be it to the Graveyard, hand, or field. Many decks rely on cards to search or special summon from their deck, which Ash Blossom & Joyous Spring shuts down entirely.

In Master Duel, it shuts off Maxx “C” as well, which is one of the most played cards of the entire format. There are so many things that Ash Blossom & Joyous Spring hits, making it such a good staple. 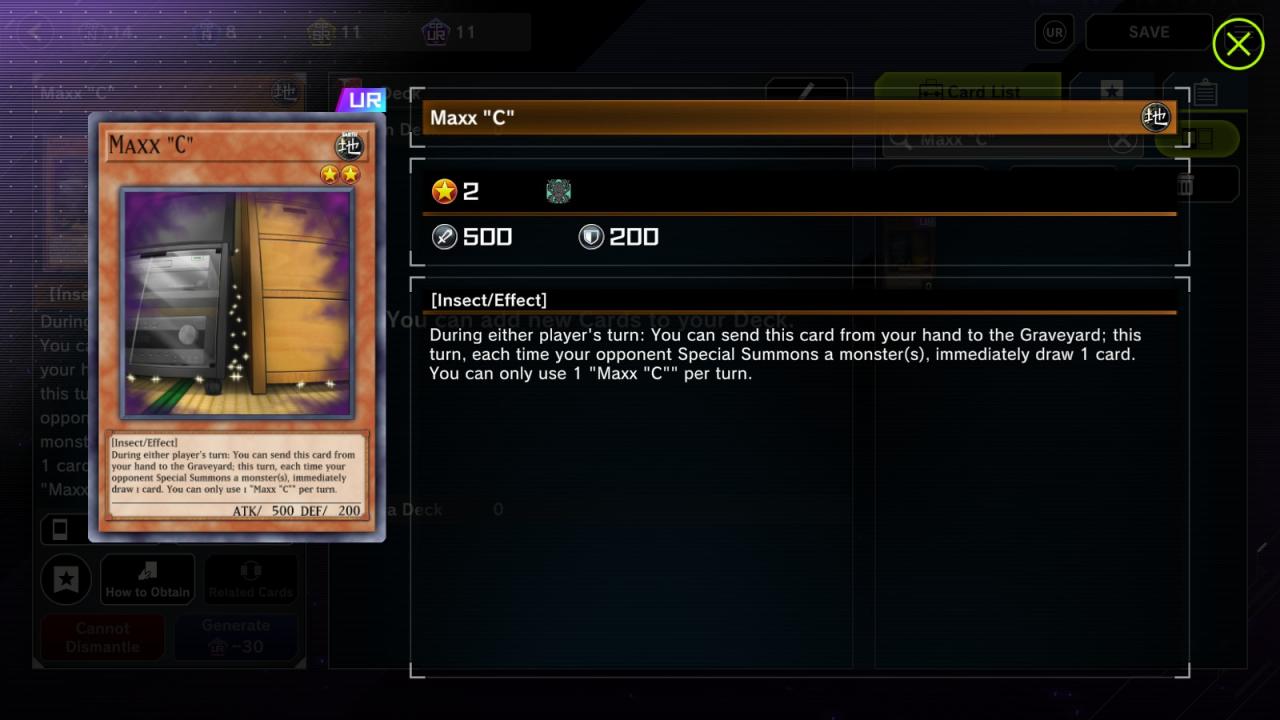 Maxx “C” is one of the best hand traps, and even cards ever printed. At the cost of a simple discard, Maxx “C” allows you to draw a card each time a Monster is special summoned. Against combo decks, unless they just end their turn, you’ll be able to draw a plethora of cards to try and break their board.

Pot Of Greed is banned for a reason, and in many ways, Maxx “C” can act as an even better version than that, drawing sometimes over ten cards in a single turn.