This guide is meant to help you obtain Holy Talismans to allow you to unlock fleeces. This is a step by step guide, allowing you to follow along while collecting what is needed. Collecting all is slightly time consuming. Your most likely trying to unlock the “Transmute” achievement. This will help you obtain that achievement.

Fishing For The Fisherman 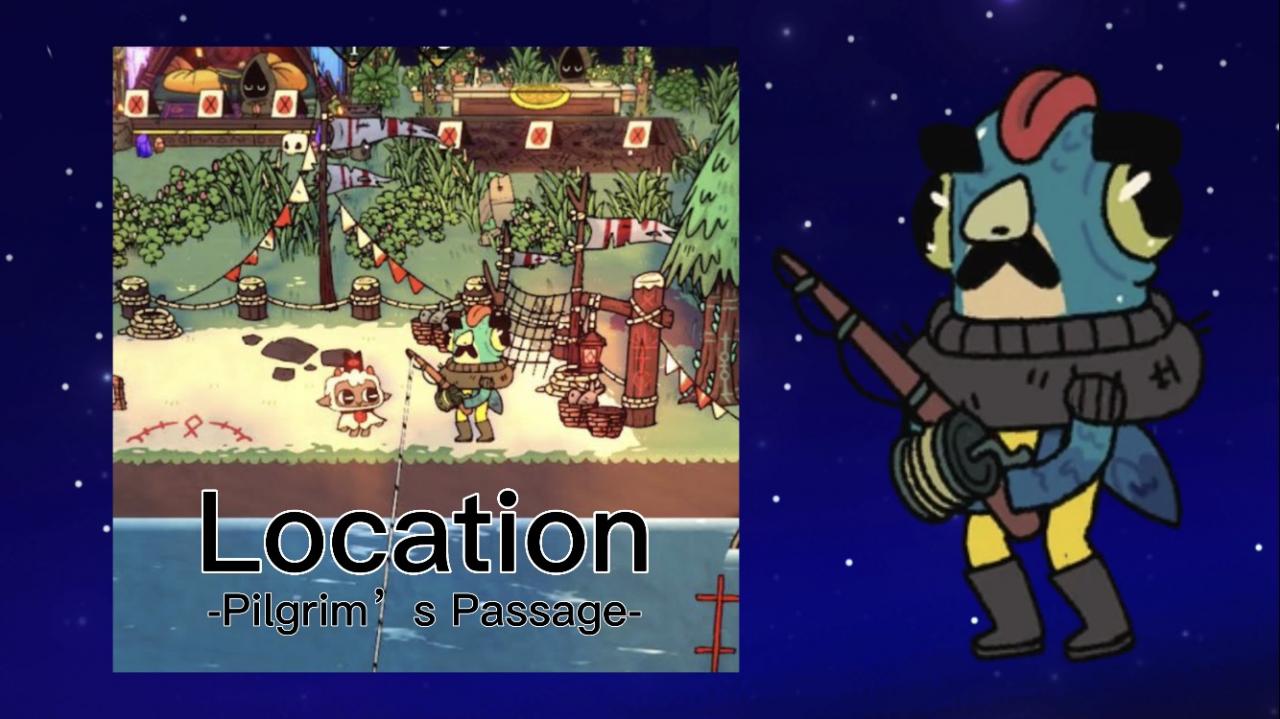 One of the first characters you can start getting peaces for a Holly Talisman is from the fisherman. He can been found on your adventure while exploring “Darkwood”. He will add “Pilgrim’s Passage” onto your map. Once you speak to him at “Pilgrim’s Passage”, he will ask you to catch 4 different types of fish. 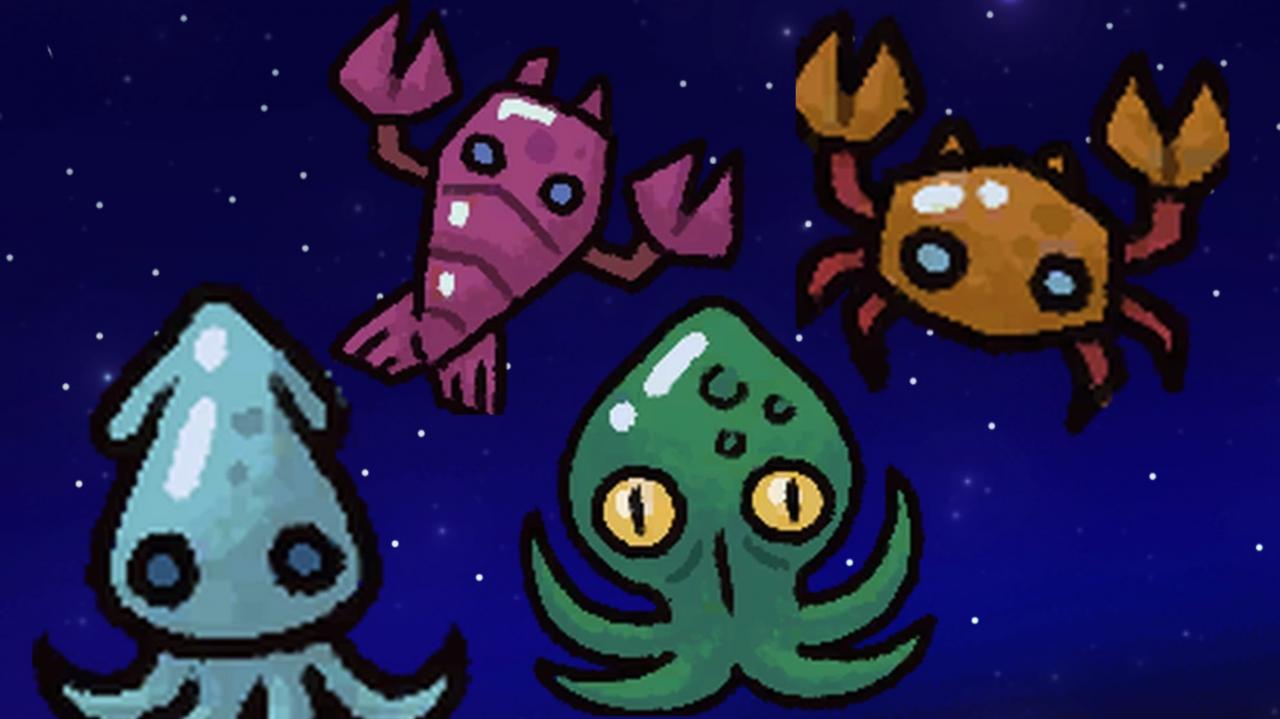 Those being a Lobster, Crab, Squid, & an Octopus. You can catch them in the fishing spot right to the left of him. Every time you give him a catch, he’ll give you a peace of a Holly Talisman in return. You should have a whole Holly Talisman after completing his task. If you are struggling to catch a certain fish & have the “Ocean’s Bounty” ritual, you can use that ritual to catch 2x the amount of fish & better odds catching rarer fish. 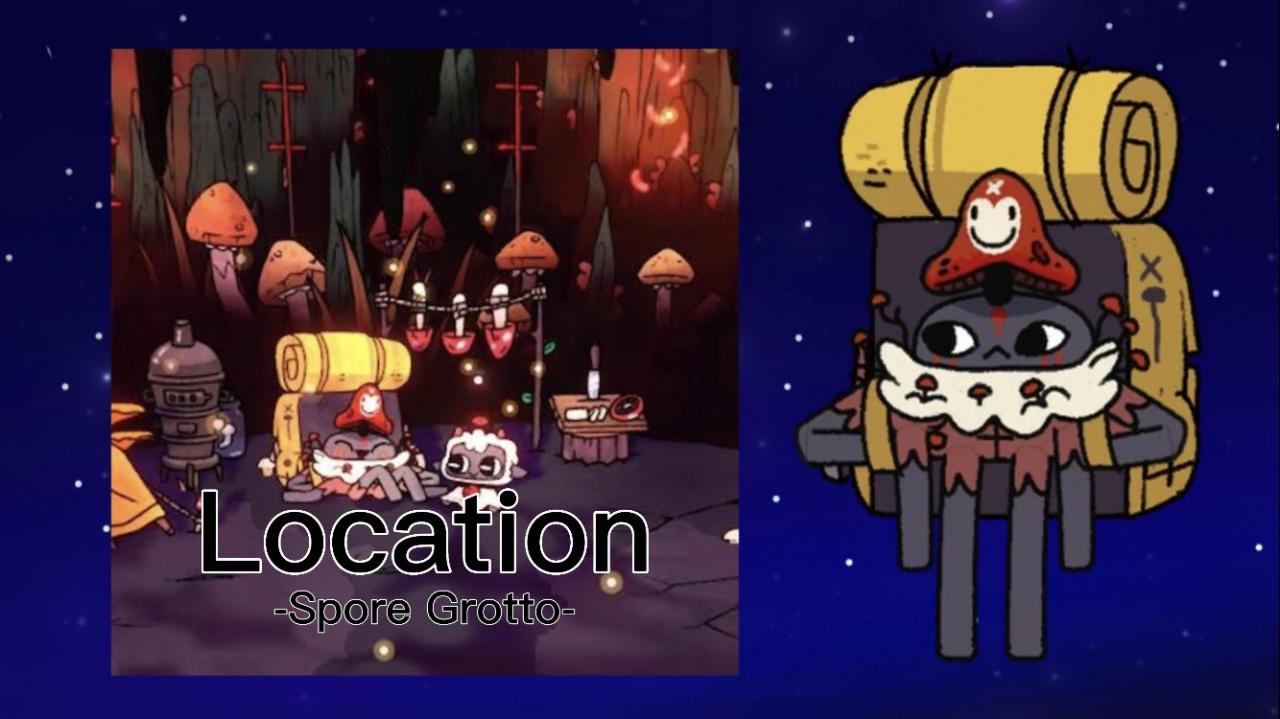 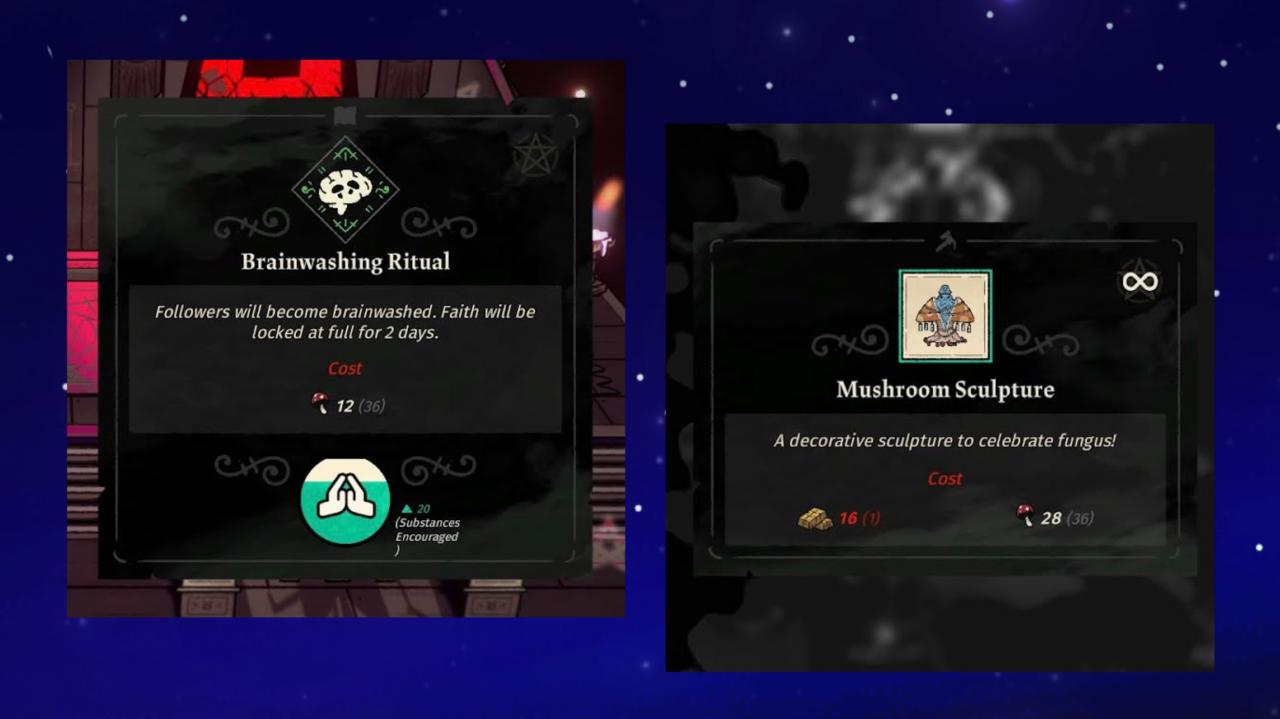 He will ask for 10 mushrooms for your fist task. After giving him 10, he’ll ask for 20 more. You can simple explore “Anura” & collect them, or you can farm them. Sozo will teach you the ritual spell “Brawinwashing”. He’ll tell you to try it out & come back once done. After completing the ritual, he’ll give you a decoration called “Mushroom Sculpture”. You will need to build that decoration in your cult & then talk to him again. Completing each task gives you a peace of a Holy Talisman. 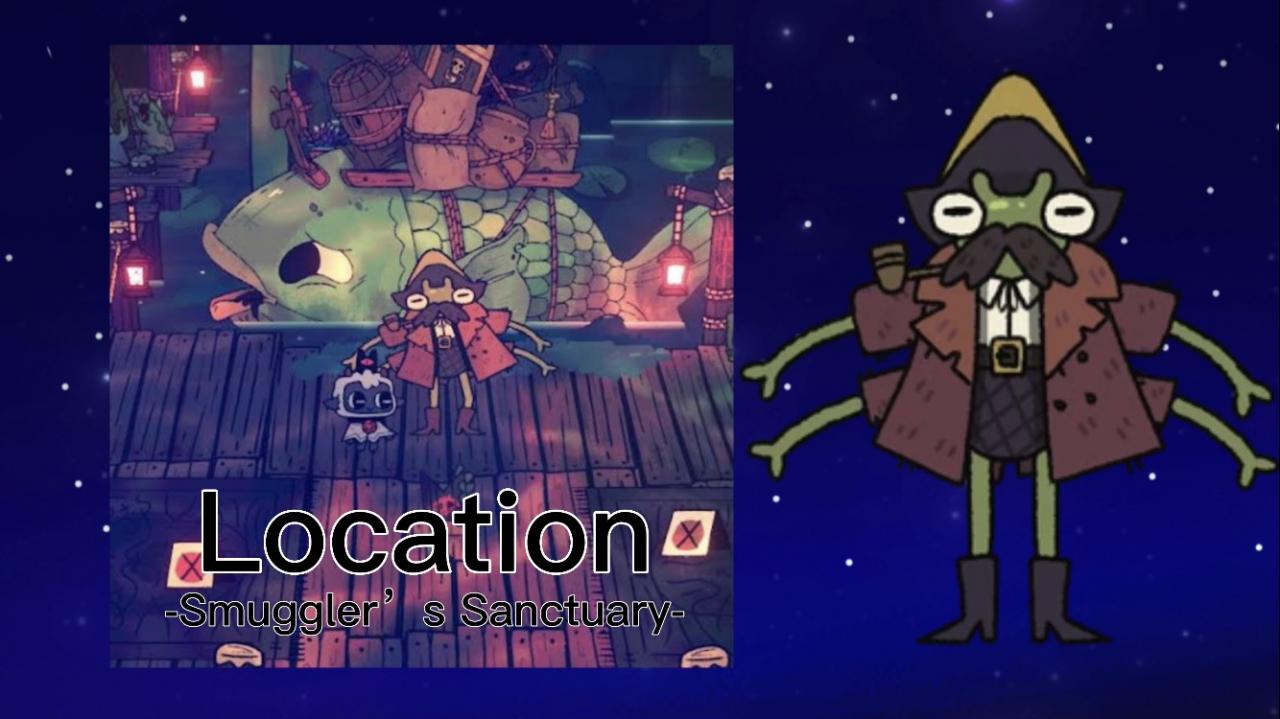 While exploring in “Anchordeep”, you can run into Plimbo. He will add “Smuggler’s Sanctuary” onto your map. He will ask of you to get rid of a few bosses that will drop an item known as “Eye of the Witness”. In order to find these bosses, you will need to defeat each cult leader in each area. Once you go back to each area, you should be able to fight a new boss that drops “Eye of the Witness”. After defeating all of them & collecting the “Eye of the Witness” from each, give them to Plimbo & he’ll give you peaces of Holy Talisman in return. 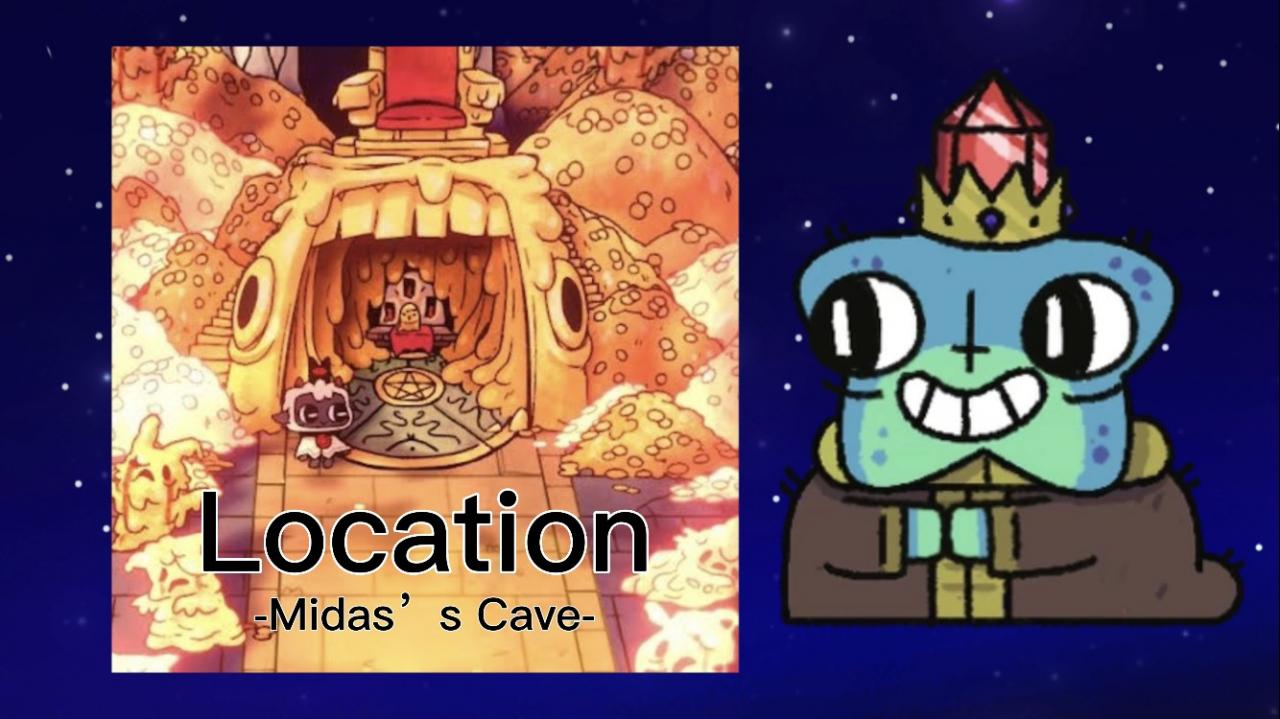 Midas will be one of the last characters you can earn Holy Talisman peaces from. You’ll unlock “Midas’s Cave” while exploring “Silk Cradle”. You’ll come across a sign that will put the location onto your map. In order to receive peaces, your going need a total of 4 cult followers to sacrifice. In order to sacrifices a follower, you’ll need to stand right under Midas’s throne. You should be able to get a selection allowing you to pick a follower to sacrifice. Midas will give you a peace of a Holy Talisman for ever follower you sacrifice. But this can only be done four times.

Soulful Deal With a Fox 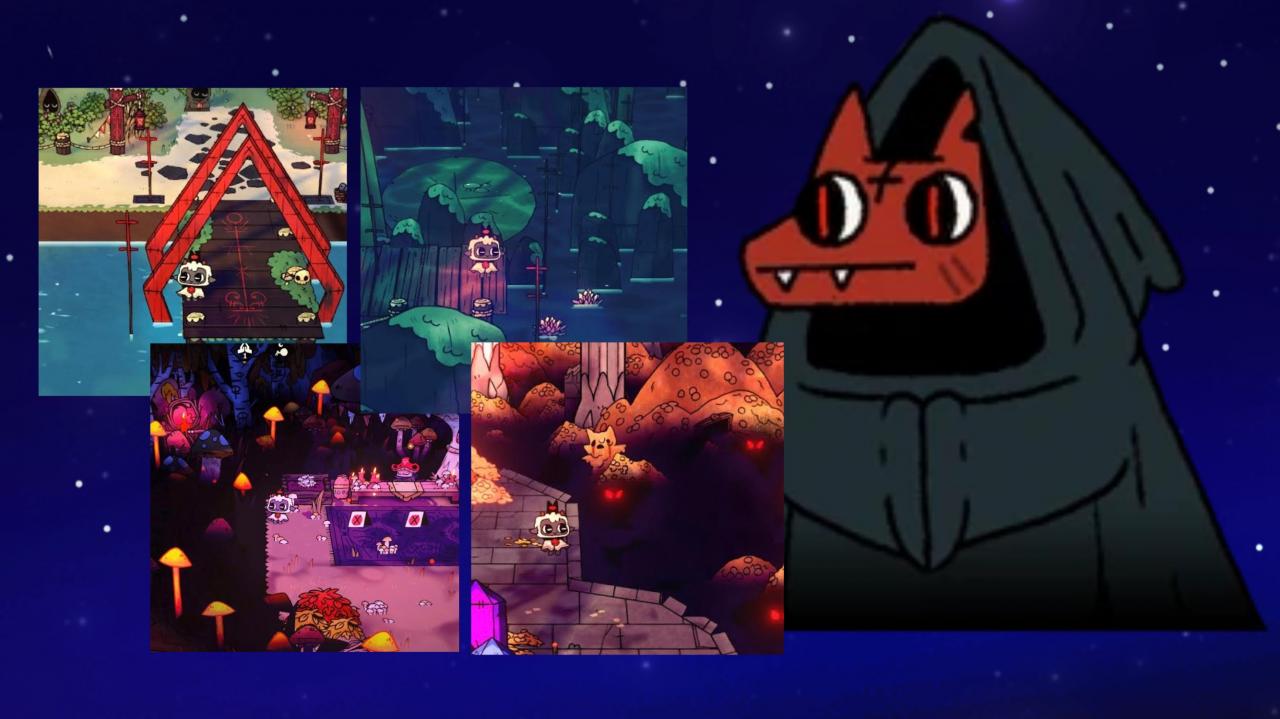 In every single location you’ve unlocked besides “Lonely Shack” & your own home base, you can find a mysterious character named Fox. You can find him in 4 different spots, only at night time.
– At the end of the dock on the left in “Pilgrim’s Passage”.
– On the left side of the tarot shop in “Spore Grotto”.
– The right side of the dock in “Smuggler’s Sanctuary”.
– In the top right corner of “Maids’s Cave”. 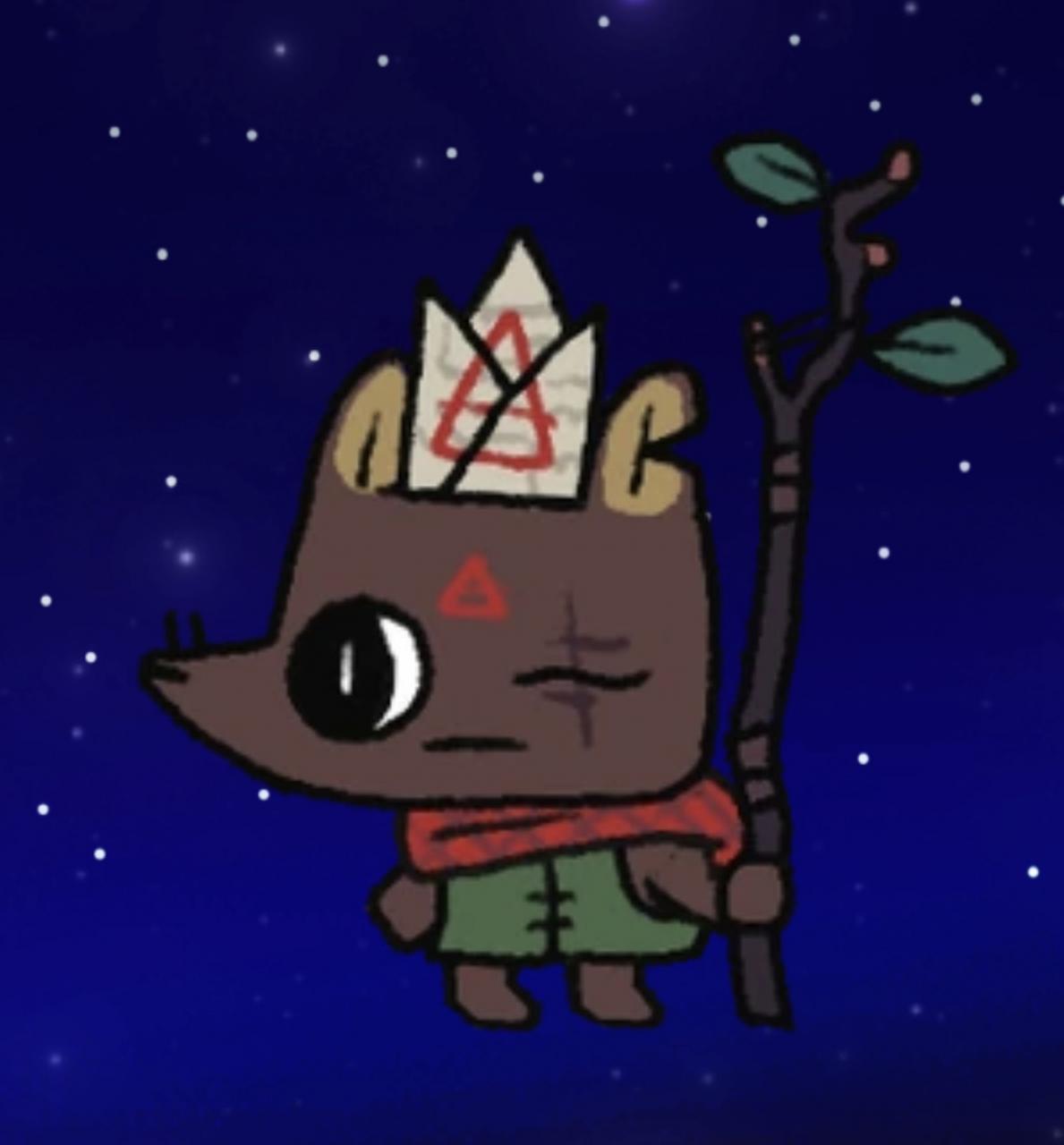 Once you’ve found his location in each area at night, you can make deals with him. First he will ask for a big fish. Second he’ll ask for 1 follower. Third he’ll ask for 2 followers. Lastly, he’ll ask you to hand over “Ratau” the rat. Everytime you give him what he asks for, he will give you a peace of a Holy Talisman. You also unlock a new follower skin after handing over “Ratau”.

! Warning !
Do not hand him over “Ratau” if you did not collect the tarot card for beating him in “Knucklebones”! If you’r trying to get all the achievements, you will need that card for the “Full Deck” achievement.

How To Use Holy Talismans 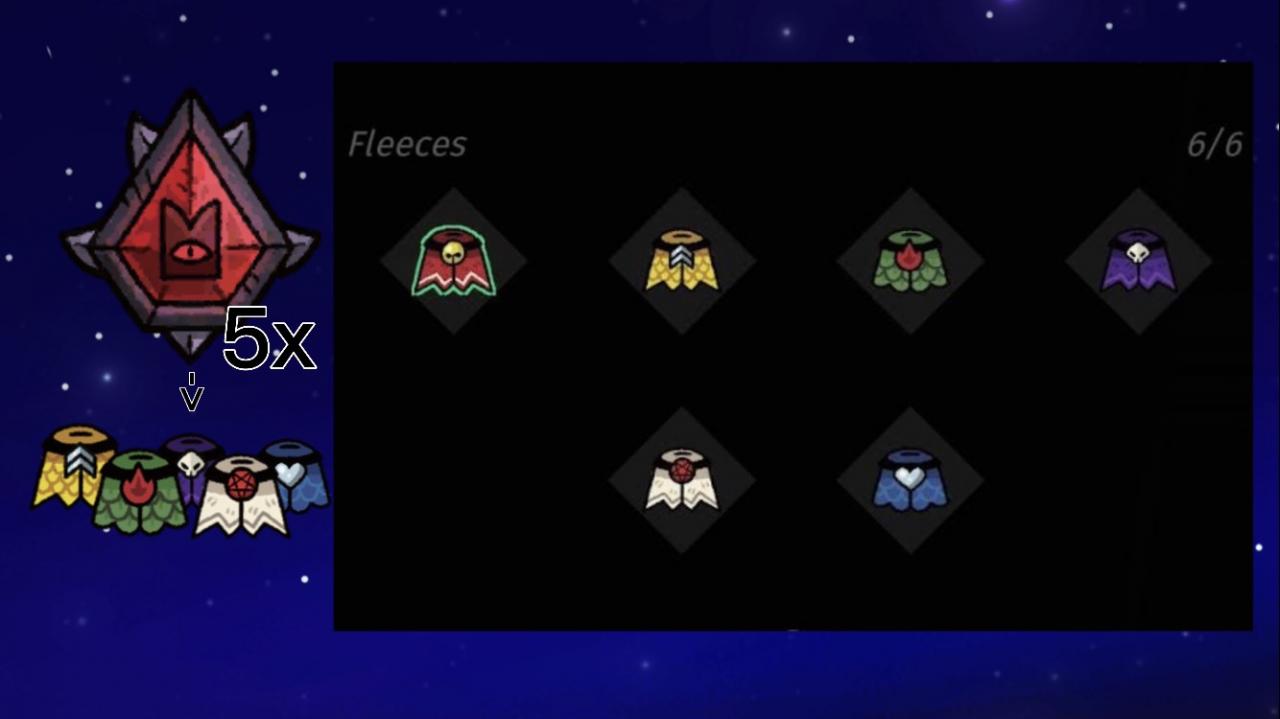 Once you’ve collect any Talisman, your going to need a temple built in your cult. When your in the temple, use the altar & select the crown option. There will be a “Fleeces” section where you can unlock one fleece per Holy Talisman. Each fleece gives you new abilities with a few down sides. Collecting all will give you the “Transmute” achievement.

~ Fleece of the Glass Cannon ~
“Curses deal double damage and cost half the fervor, but melee weapon damage and health are halved.

~Fleece of the Diseases Heart ~
“Gain a diseases heart every time a tarot card is drawn, but 100% of items will be lost if killed. Maximum of one diseases heart at a time.”

~ Fleece of the Fates ~
“Draw 4 tarot cards at the start of a run, but none can be drawn after.”

~ Fleece of Fragile Fortitude ~
“All hearts will be replaced by 1.5x the amount of blue hearts.”