This guide is created for those who want to immerse themselves in the world of Cuphed and learn a lot about the characters of this game.

Bosses of Ink Island One

It is considered the first boss in the game, although most often players go first to the gang of root crops. The boss is a blue blob that impetuously jumps on the player and from time to time hits him with a giant hand. It has three phases.

Here, as with Guppy Le Grande, there are three phases, but there are three bosses, not one (one for each phase). The bosses are Sal Potato, Ollie Onion and Chauncey Shantane. Onions are considered the simplest of them, Carrots are the most difficult. They are the easiest bosses in the game.

Two bosses and three phases. They are two toads and are considered the most difficult bosses in the first world (Ink Island One). The first two phases are quite easy if you learn how to resist them, but the third phase, which is absent at the minimum difficulty, is the most difficult (they turn into a slot machine), which is why it’s better for beginners to leave these bosses for last.

One boss and as many as six phases, however, the first, third and fifth phases are intermediate and do not pose a serious danger to the player. The boss is a girl who turns first into a kind of airship, then into one of the 3 zodiac signs (Taurus, Gemini, Sagittarius). The boss is also the first aerial boss in the game and one of the lightest.

One boss and four phases. It is an aggressively tuned flower, is considered one of the most difficult bosses in the first world, mainly because of the large number of assistants being summoned and the difficulty of hitting it. In the first three phases, it is easy to get used to the flower and learn all the attacks, but in the last fourth phase, the flower takes root underground and restricts the safe area for movement.

Pippi the Clown
One boss and four phases. It consists of a tall clown dressed in a red and blue clown costume with a white collar, which has alternating blue and red triangles on the sides. One half of his face is red and the other half is white, has a long nose and yellow eyes with large black pupils, as well as a monobrow painted in red and blue. A small black top hat is put on his head. The main feature is the train that appears from the second phase, which can take a slow player by surprise and interfere with dodging other attacks.

One boss and five phases. One of the flying bosses. He looks like a red genie, wears a blue turban with a red stone and a feather, a blue vest, blue pants and black and white bracelets. Instead of shoes, he has lamps.

One boss and four phases. As it is clear from the title, it represents a candy baroness. Dressed in a pink and white dress. Wears a headdress in the form of an ice cream cone. The main feature of the boss is that for the battle in the first 3 phases, she sends her subjects, and is also able to separate the head from the body, growing a new one to replace it. 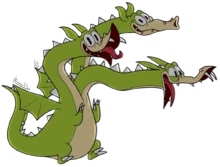 One boss and three phases. It represents a green dragon spitting fire and shooting some circles out of its eyes. In the last phase, it grows two more heads. The whole battle takes place in the air (not on airplanes). The player must jump on small clouds to maneuver. It is considered the most difficult boss of the second world and one of the most difficult bosses in the game.

One boss and three phrases. Represents the cuckoo, who is still sitting in the clock, attacking him (or her) with finger rockets and eggs. After defeating him, his son appears. After defeating his son, Wally Worbles appears, who is carried by the doctor birds, you can dodge his attacks. He is considered one of the most difficult bosses in this world.

Rumor Honeybottoms
One boss and three phases. Represents a bee. In the first phase, she calls a security guard. After defeating the guard, she comes by herself. In the third phase, she reads a book after which she becomes an airplane. It looks like a battle with a Makeup Matchstick, but only from above.

It is a long-faced brown rat that controls a tank in the form of a crumpled tin can located on a wooden cart, and after its destruction — a robot cat, and with which you need to fight three phases.

One boss and two phases. Represents a pirate on a ship.

One boss consisting of three phases. She is a mermaid with a pale lilac skin color and a green tail with scales, and instead of hair she has a wig in the form of a dead purple octopus.

Sally Stageplay
One boss and four phases. It represents a woman in a blue dress and boots with an umbrella.

Four bosses and four phases: A blind ghost — a light blue ghost, whose hands have eyes attacking players; A conductor is a very large skeleton with a conductor’s hat; Candy Ghouls, similar to lollipops on a stick; A train head with a blue face and a gray body.

A boss consisting of a robot and its creator — a mad scientist who has three phases.

Dr. Kahla’s robot is one of the few bosses whose progress bar is distributed very unevenly — the last phase occupies almost the entire strip.

A boss who is the Devil’s right-hand man and the secondary antagonist of the Cuphead game.

King Dice looks like an anthropomorphic dice. He’s wearing a purple suit with a big purple bow. You can notice the shadows of a delicate purple color on his eyelids. It is noteworthy that the nose of King Dice is a point-unit, like on the edge of a playing cube.

The main antagonist of the game and the final boss, who is the ruler of the ink hell, with whom you need to fight two phases. “Don’t deal with the Devil!”