Every week, Electronic Arts unveils the FIFA Team of the Week, composed of the players who have played particularly well in the different leagues. Here is the FIFA 22 FUT Team of the Week 35, the FIFA 22 TOTW 35.
As the season draws to a close, Ultimate Team fans are looking at the final maps to round out their rosters. Who stood out from their peers to make the coveted 23 of the Week? Check out the Team Of The Week, or TOTW 30 available from Wednesday, May 18, 2022 at 7pm to Wednesday, May 25, 2022 at 7pm.

FIFA 22 obviously continues the tradition of the FUT Team of the Week. Looking for the FIFA 22 TOTW on the current date? Find the complete FIFA 22 TOTW 35 list for May 18, 2022 below, along with their ratings: 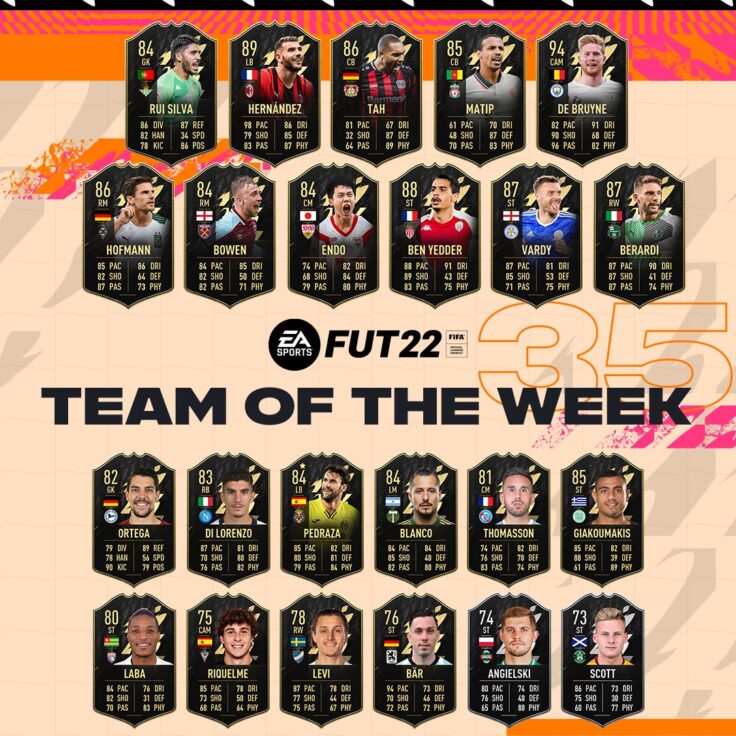 Who are the substitutes for the TOTW 35?

Whether you play the soccer game on PlayStation 5, Xbox Series, PS4, Xbox One, Switch or PC, check out the full FIFA 22 Week 35 team substitutes.

What day does the team of the week come out?

Highly anticipated every week, the Team of the Week generates a real buzz on the internet, where soccer fans offer their prediction TOTW waiting for the middle of the week to be the real deal.

Indeed, traditionally, EA Sports announces the FUT 22 TOTW on Wednesday at 7pm, which gives them the opportunity to take into account the games played on Monday night. The 23 players of the week are then immediately available on FIFA 22.

As mentioned above, since the release of FIFA 22 on October 1st, the TOTW (Team Of The Week) mode has been highlighting players who have excelled in the league or national team the previous week. Players are rewarded for a last-minute goal or a majestic save to keep their team clean sheet.

The TOTW cards then replace their base version, which are then added back into the game when the team is rotated the following Wednesday.

Some fans of the franchise have complained, however, about the obsolescence of some TOTW cards, which were quickly replaced by other special cards such as the Ones to Watch, which evolve throughout the season.

In response to their request, EA has implemented a new TOTW Player of the Week system. Each week, one of the 23 players of the week with a star above their rating will receive a double boost. However, only players with a base card under 80 and no other upgrade card are eligible for this bonus.

To get the FIFA 22 Players of the Week, you can:

When are the FIFA 22 TOTYs released?

Another popular category for FIFA Ultimate Team fans is the Team of the Year (TOTY). This is a selection of only 11 players, elected by the community, who have made their mark on the previous season, both in the league and in international competitions.

Unveiled in January each year by EA Sports, these cards with their unique design and exceptional statistics are only available for 8 days in the packs. This rarity adds to the mystique of this annual XI both in-game and IRL.

The World Cup to be held in Qatar this winter, from November 21 to December 18, will necessarily mark the future TOTY of FIFA 23.

How does FIFA Ultimate Team work?

Have you been dreaming of seeing your favorite players, past and present, play together as a team? Now you can.

FIFA Ultimate Team is a mode that lets you build the team of your dreams. By playing matches, you get credits that you can then spend on a transfer market constantly fed by other players.

On this market, you can buy and sell players, presented in the form of cards, and constantly improve your team.

If this mode has become the most popular in FIFA, it’s because it revolves around the world of soccer, just like the TOTW mentioned above. Also, the most popular players are also the rarest and most expensive in FIFA 22. However, the FUT mode also takes into consideration the affection links between players, symbolized by different colored connections. These connections are not only affected by the nationality of the players, but also by the club and league they play in. The precision of their passes or the quality of their calls, for example, will be felt in the match.

The game is not only based on the individual quality of the players, but also on your ability to build a meaningful team.

The game provides you with a whole range of tools to build a successful team online: