General
Left 4 Dead 2 has many landmarks throughout the story. This guide will tell you all about the Left 4 Dead 2 Landmarks and where they are located.
Dead Center Hotel
Starting off the Left 4 Dead 2 story on the roof of the Savannah hotel, you will find yourself in between rooms filled with beds and zombies. You can find a map showing all the places that were wiped from the apocalypse (This is the reason why Ellis really wanted to get to New Orleans). 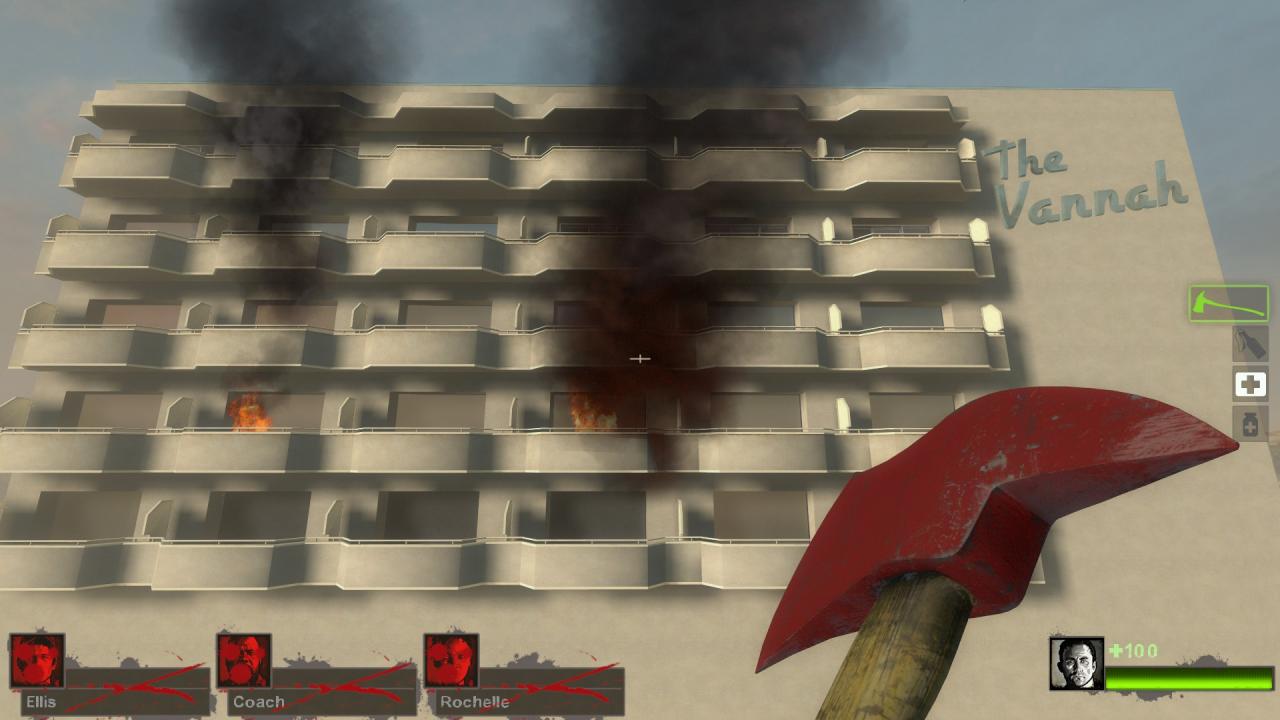 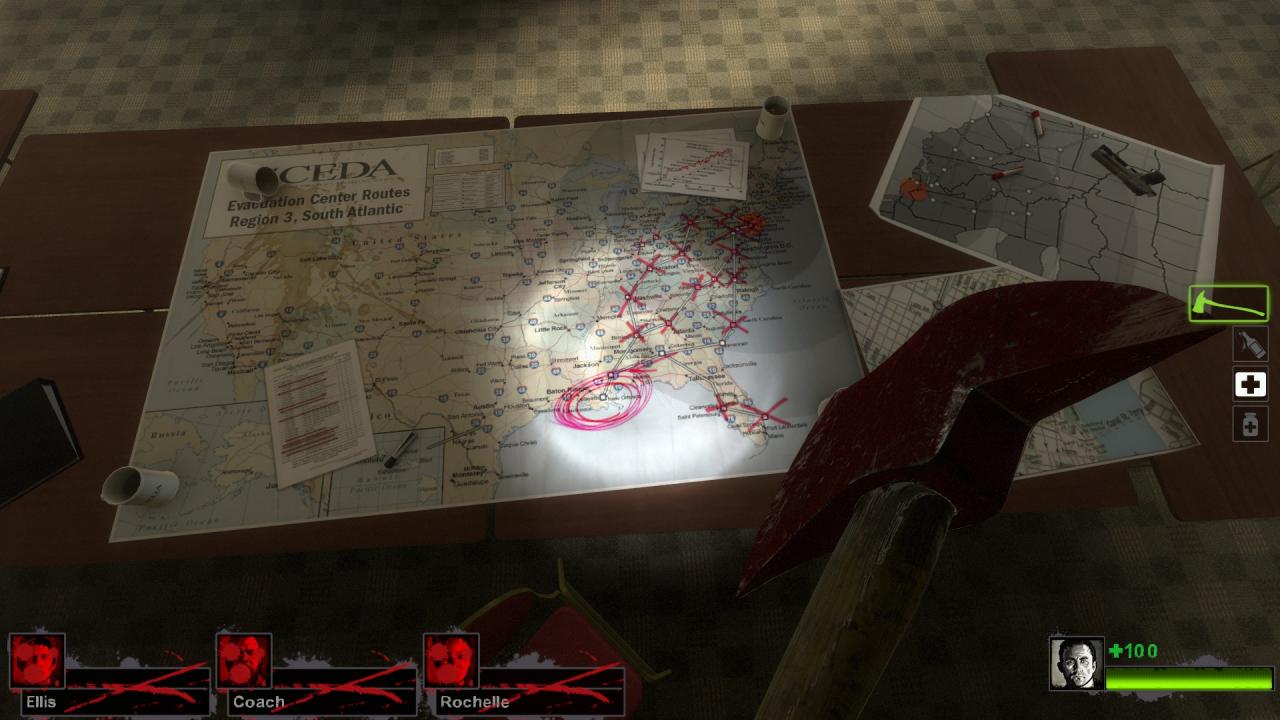 Landmark Location: Dead Center Chapter 1 (Hotel)
Whitaker’s Gun Shop
After getting out of the hotel, the survivors fight through the streets of Savanna to run right into Whitaker’s Gun Shop (Candy store for adults – Nick). While the survivors are taking guns, Whitaker tells them over the intercom that he will take care of the tanker (which is blocking the route to the mall) if they get him some cola. 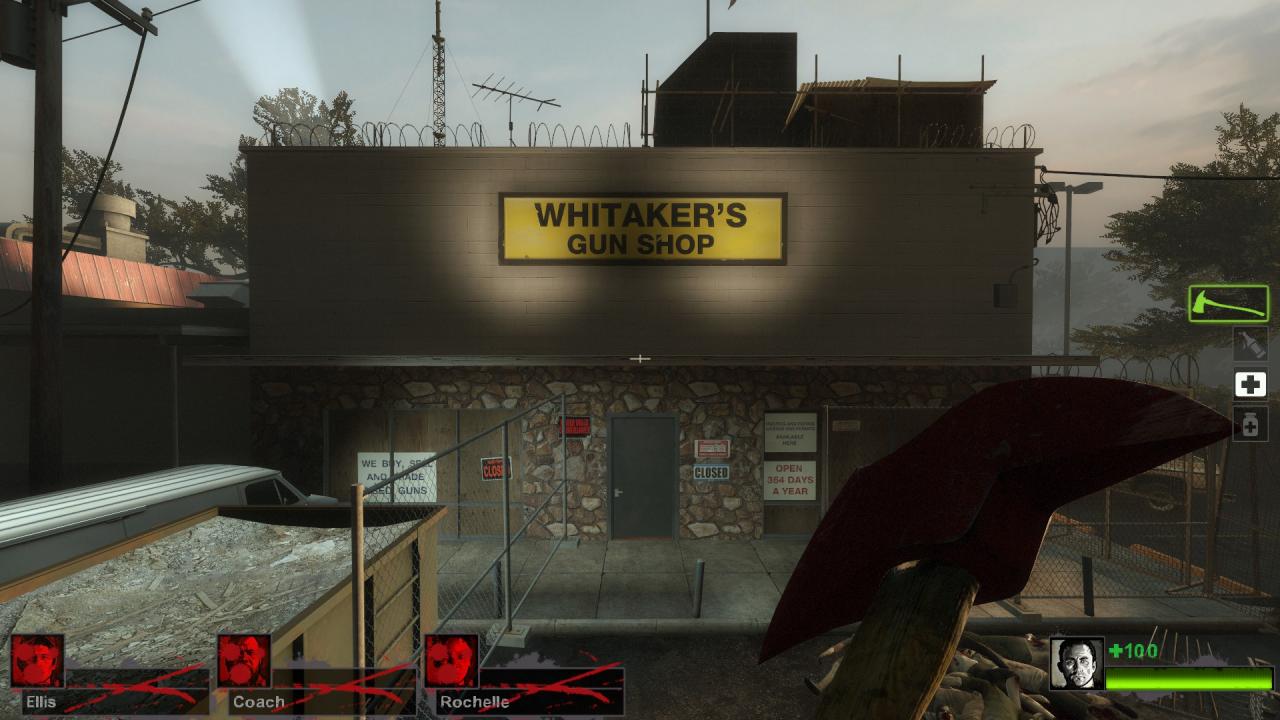 Landmark Location: Dead Center Chapter 2 (Streets)
Dead Center Mall
After getting past the tanker, the survivors find their way into the mall. Although it’s abandoned and full of zombies, coach prays for the food court. As the survivors are walking through the mall, they find themselves running up flights of escalators to turn off an alarm and get to the saferoom. They walk into an atrium and find themselves gassing up Jimmy gibs Jr to escape. 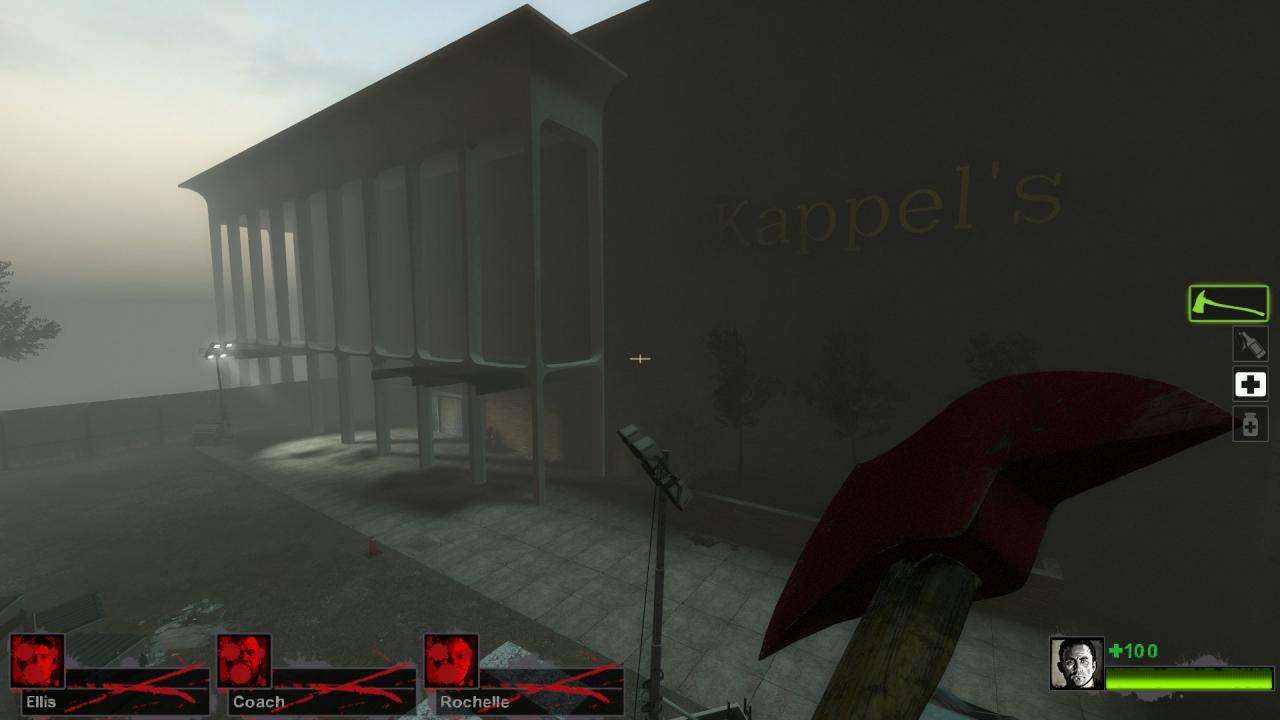 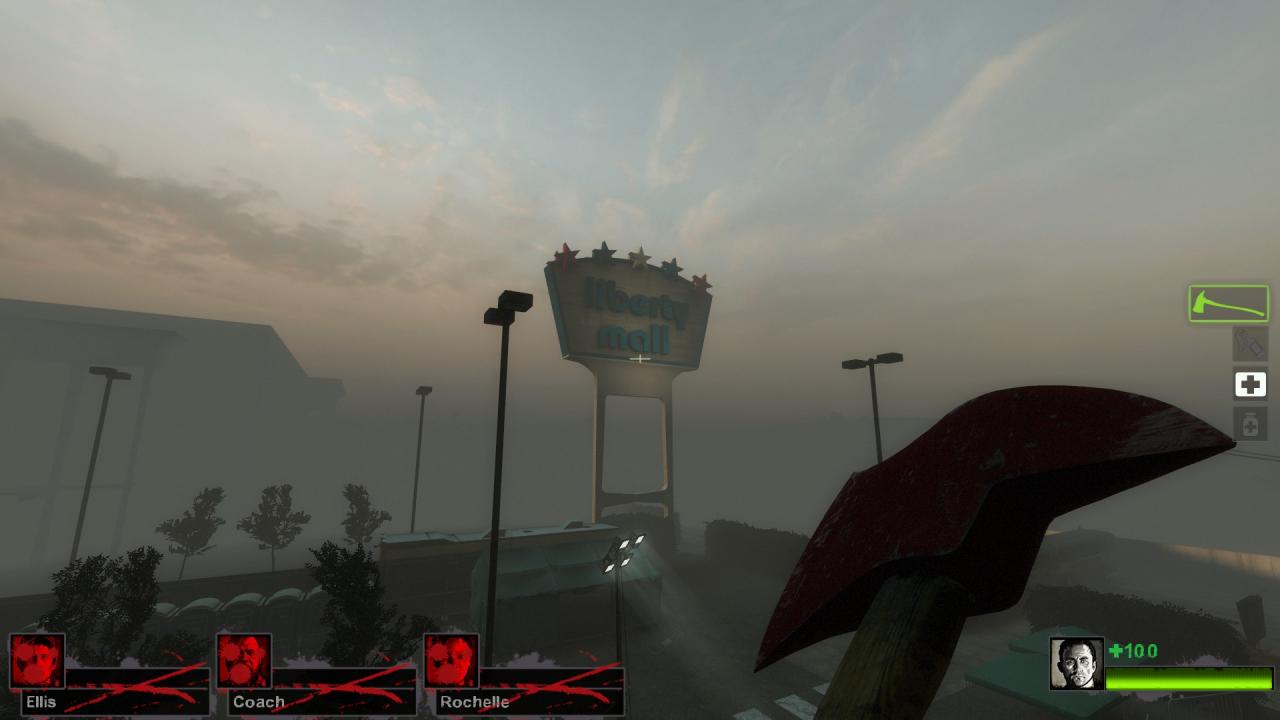 Landmark Location: Dead Center chapter 3 and 4 (Mall, Atrium)
The Passing Wedding
After escaping the mall, the survivors run into another problem as a bridge is rose where they need to go. So, they start their journey to get around to the other side. While they are on the path, they run into a wedding where a witch is crying. 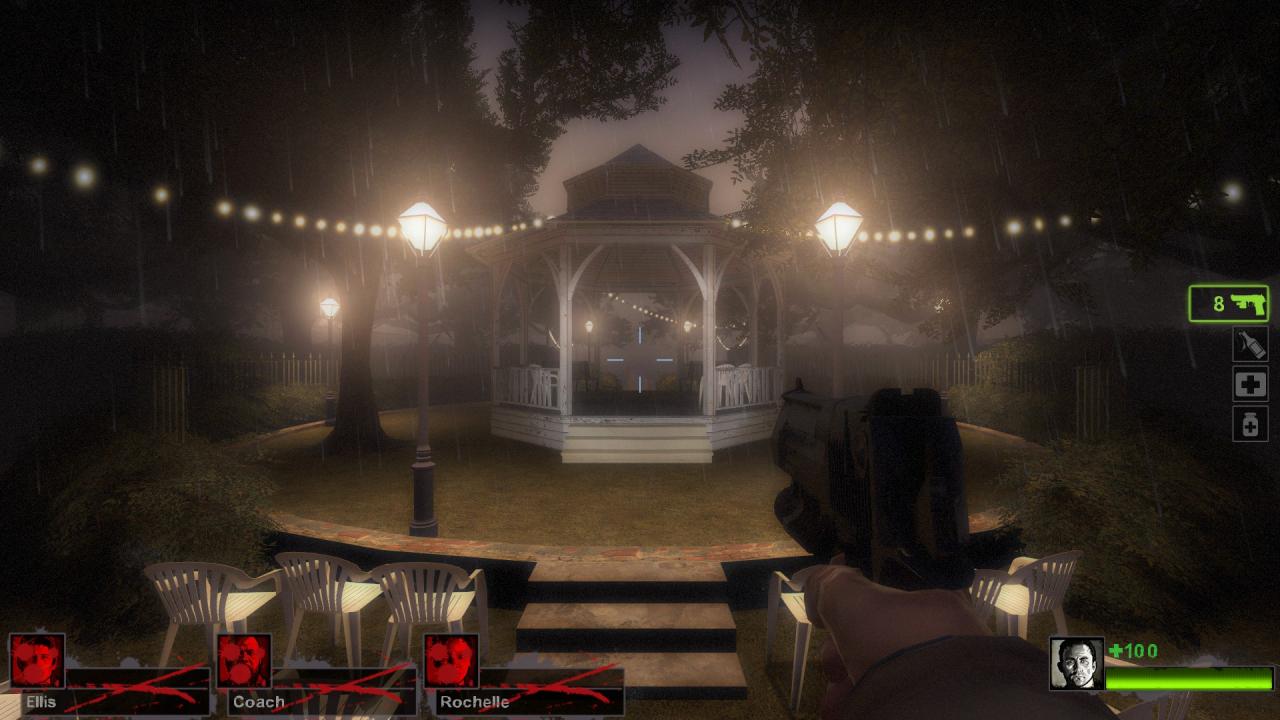 Landmark Location: The Passing Chapter 1 (Riverbank)
The Underground Tour
Finding that the underground tour is the only way to the other side of the bridge, you must get into the underground tour and make your way through an alarm while you are in water. (If anybody sees any hand sanitizer let me know – Nick). 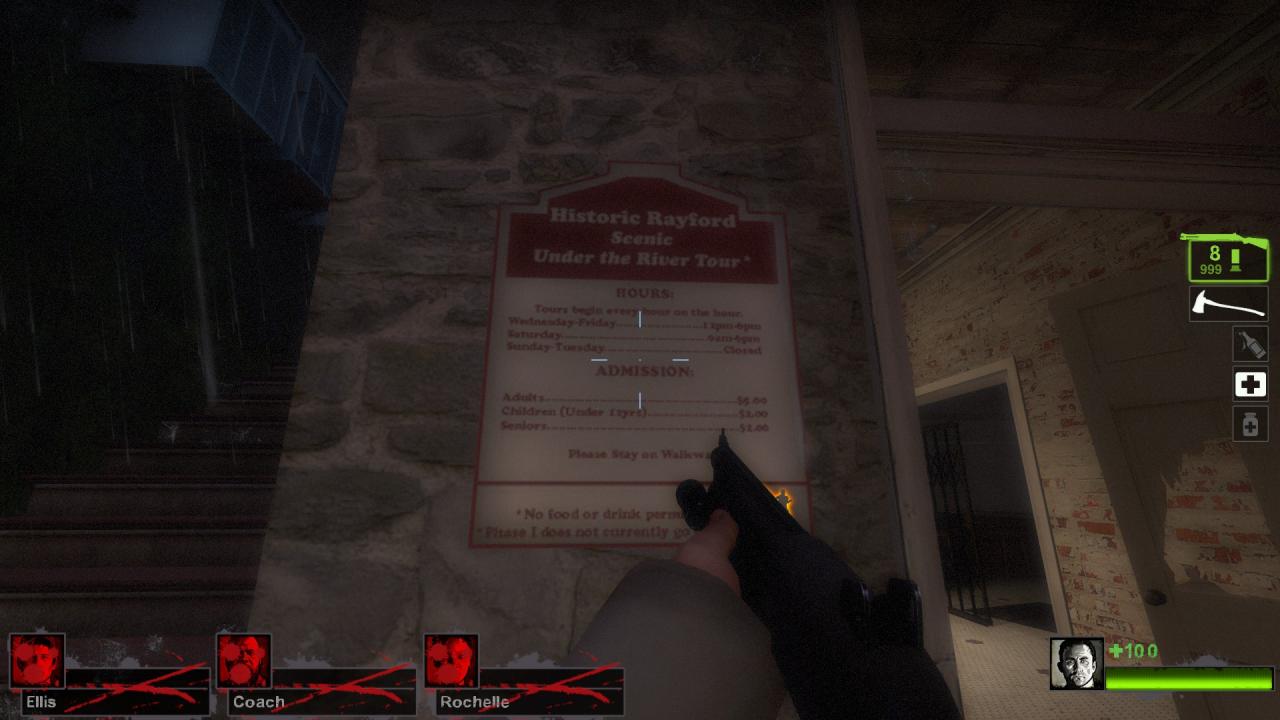 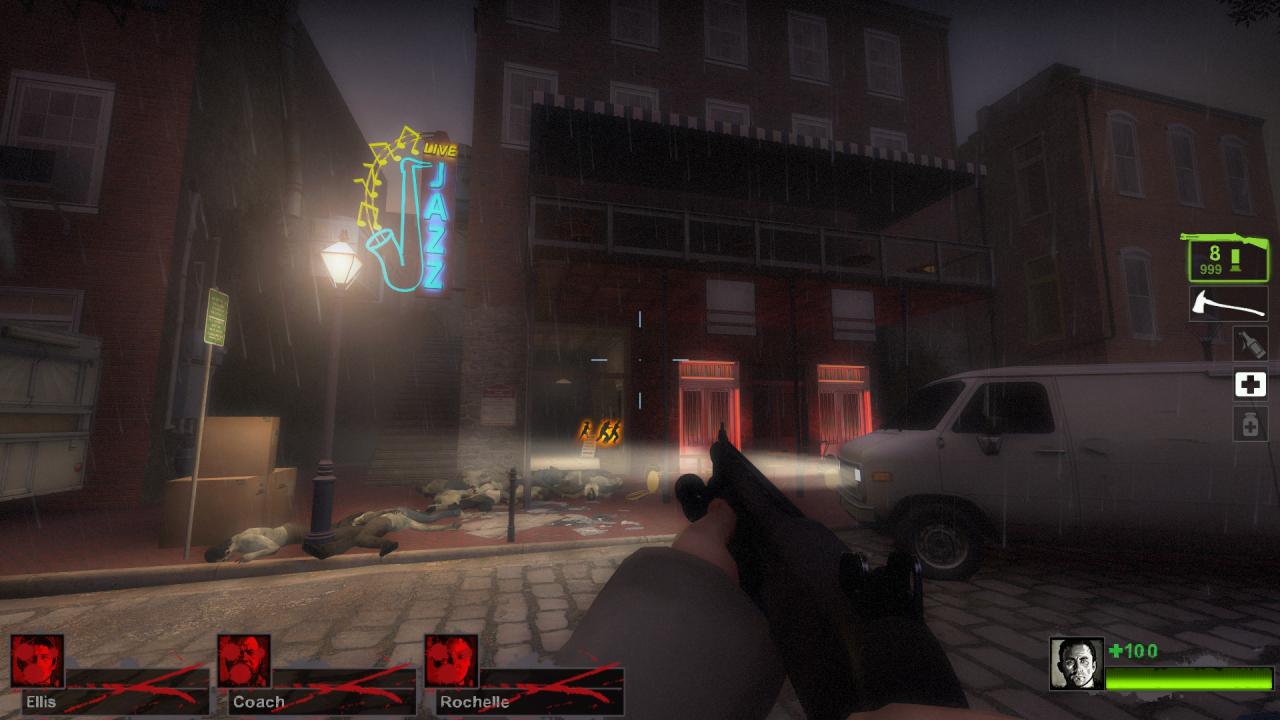 Landmark Location: The Passing Chapter 2 (Underground)
The Port
On the other side of the bridge, the survivors take an elevator to go and fill the generator (First a car, now a generator, whats next? Don’t answer Ellis – Nick). While the L4D2 survivors are filling the generator, the L4D1 survivors are covering them. Once the survivors get the bridge down, they say farewell and speed off with Jimmy gibs Jr and Nick’s turd on his shoulder. 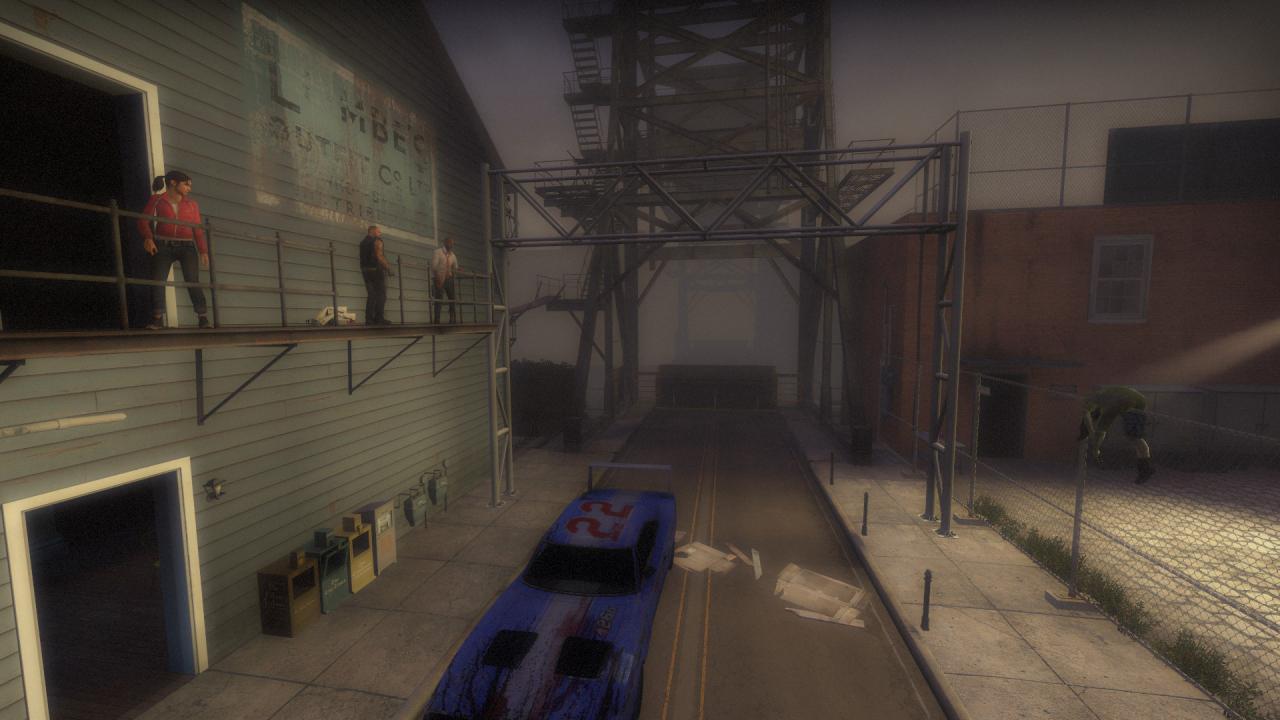 Landmark Location: The Passing Chapter 3 (Port)
Dark Carnival Highway
On their way to New Orleans, they find themselves in a traffic jam as dozens and dozens of abandoned cars block the highway. So, the survivors leave the car and being their walk. As they are walking, they see signs advertising the Whispering Oaks Carnival. 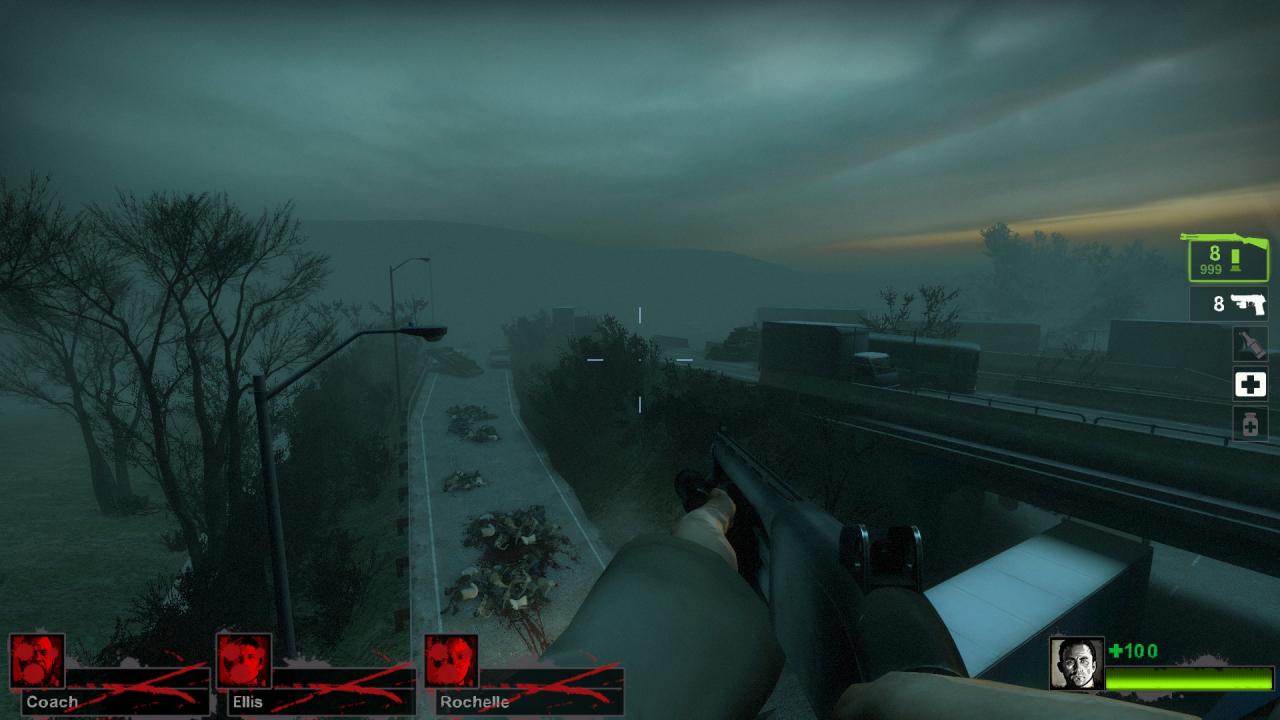 Landmark Location: Dark Carnival Chapter 1 (Highway)
The Fairgrounds
Making their way inside the carnival, the survivors can possibly find a gnome and they will fight their way through a merry-go-round. They will also hear Ellis get way too excited about kiddy land. 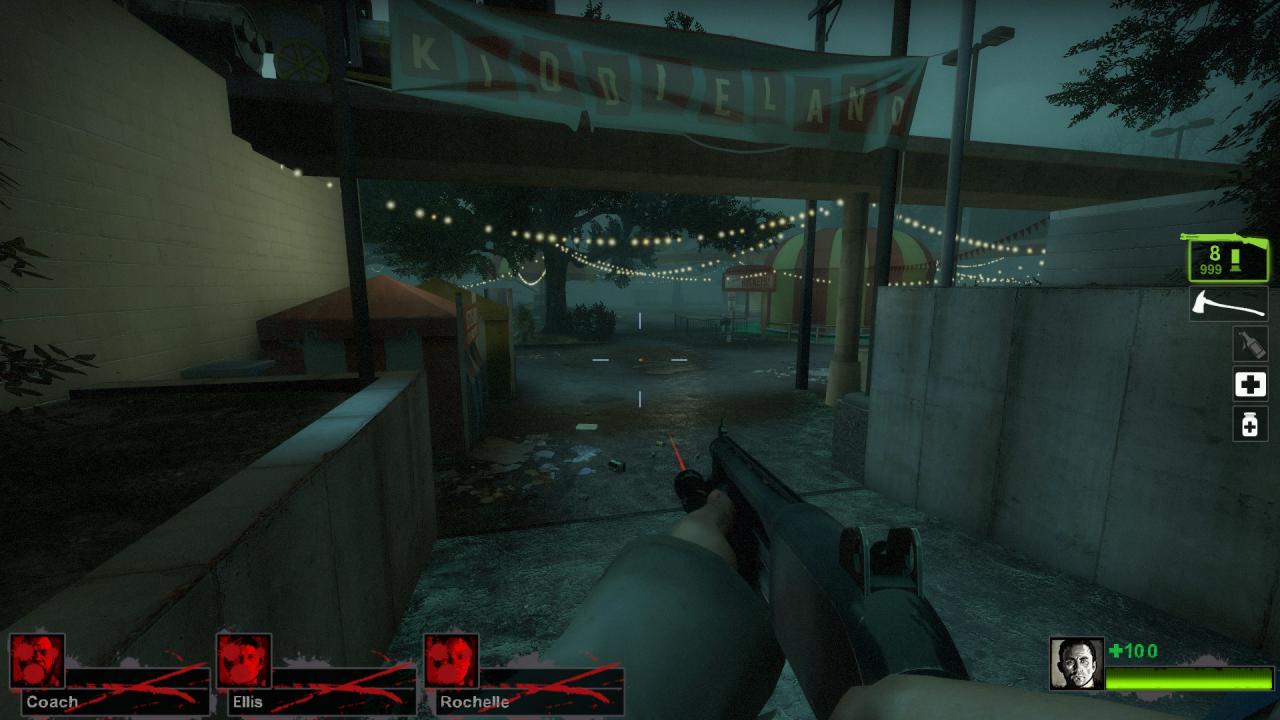 You can find the gnome pretty close to the saferoom you start at in chapter 2. You can also get an achievement for making it through the whole campaign with it.

The Coaster
After making their way through the cousins only day tunnel of love, the survivors find themselves jn front of a coaster. Once you start the coaster, an alarm will trigger making the zombies come after you instantly. Run through the coaster and make it to the end where you can turn off the alarm. 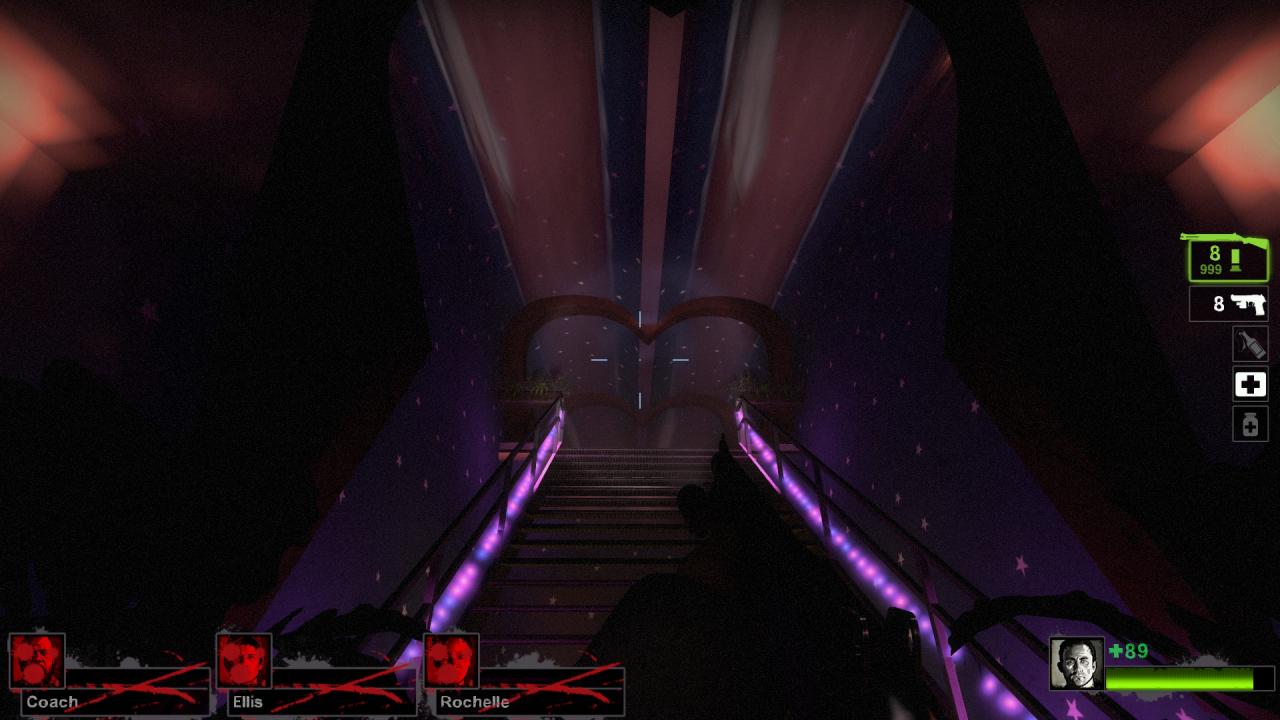 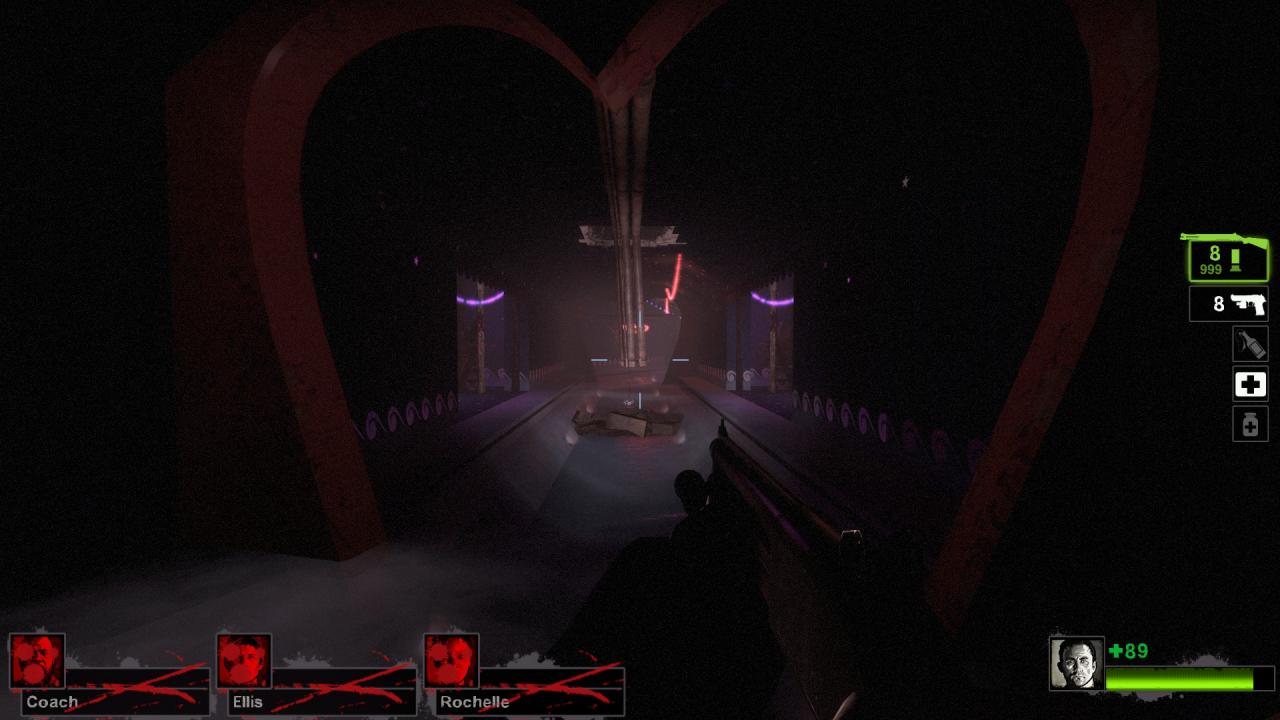 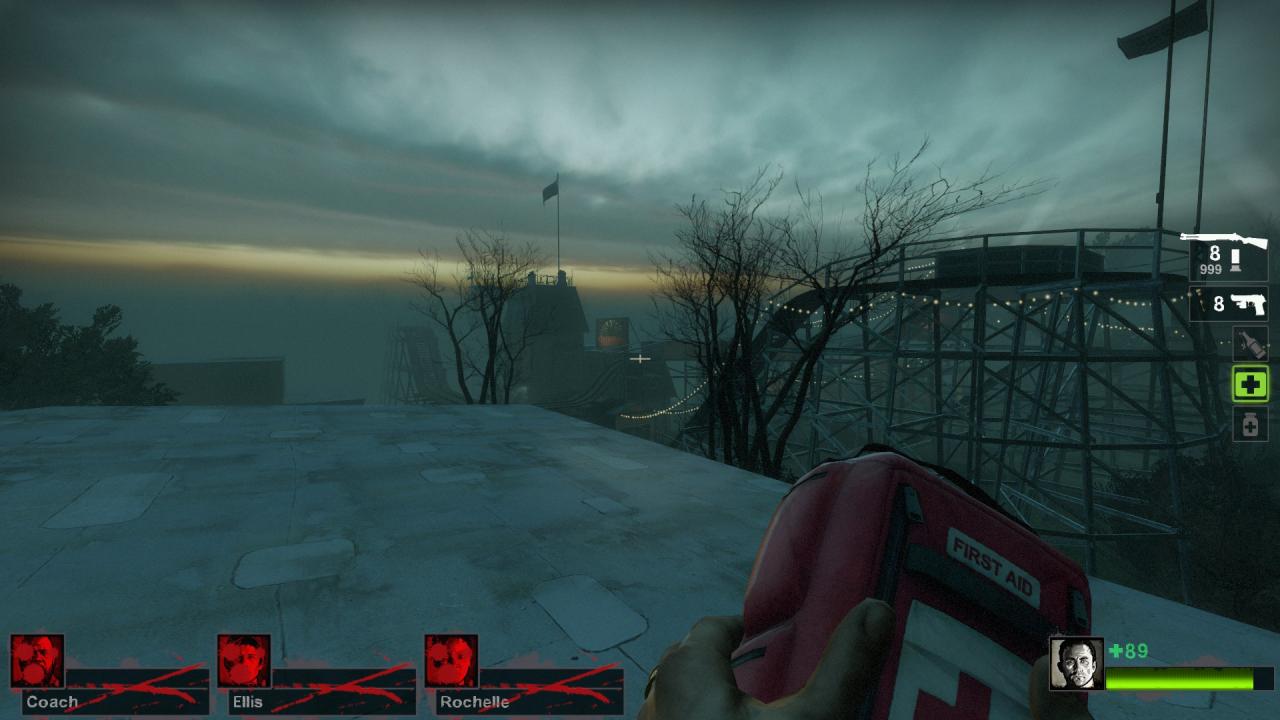 Landmark Location: Dark Carnival Chapter 3 (Coaster)
The Concert
After the survivors make their way through the carnival, they make it to the stage that the midnight riders perform on. Coach has the great idea of starting the concert in order to signal the midnight riders helicopter. 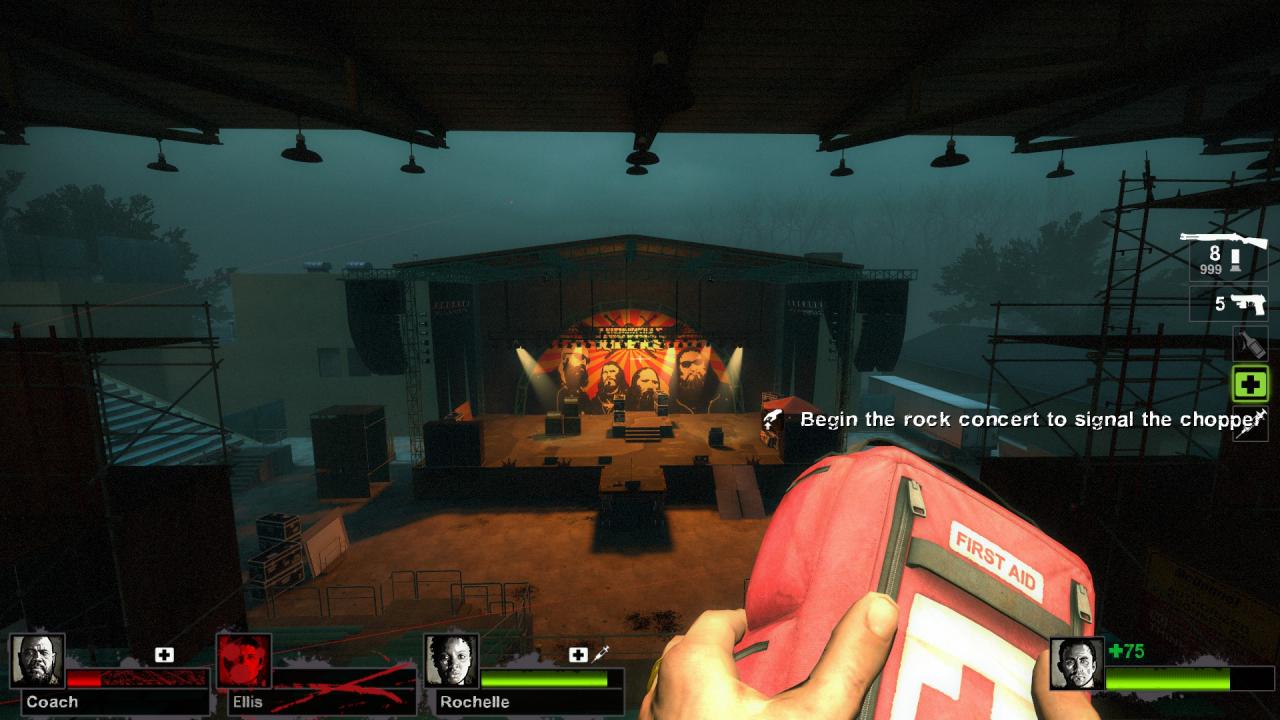 Landmark Location: Dark Carnival Chapter 5 (Concert)
The Swamp Fever Ferry
After the helicopter pilot turned zombie, nick shot him, helicopter crashes, and the other 3 yell at nick for shooting their only pilot, they walk into a small town. While they are searching, they call a ferry (which alerts a horse) so they can make their way across the cesspool full of disease. 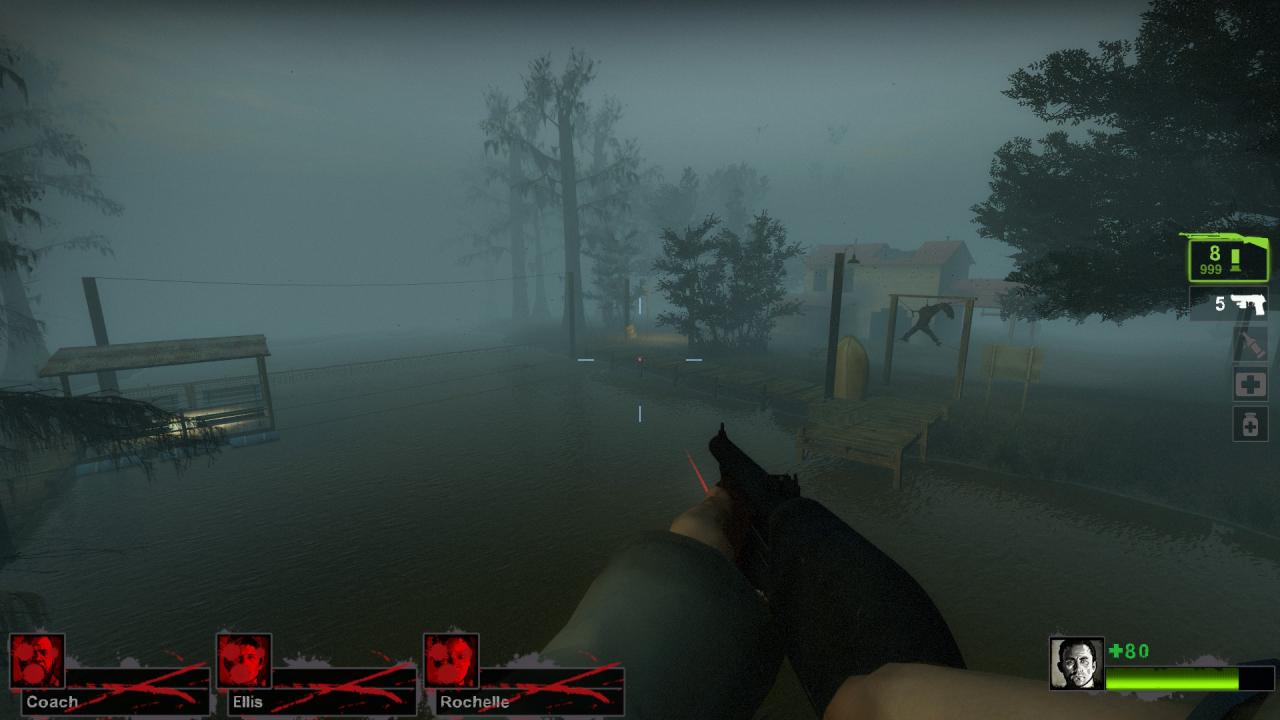 Landmark Location: Swamp Fever Chapter 1 (Plank Country)
The Crashed Airplane
Now in the depths of the swamp, the survivors find a crashed airplane in the middle of the swamp. When they open the emergency exit door to get on the other side, an alert is set off (causing a horde). 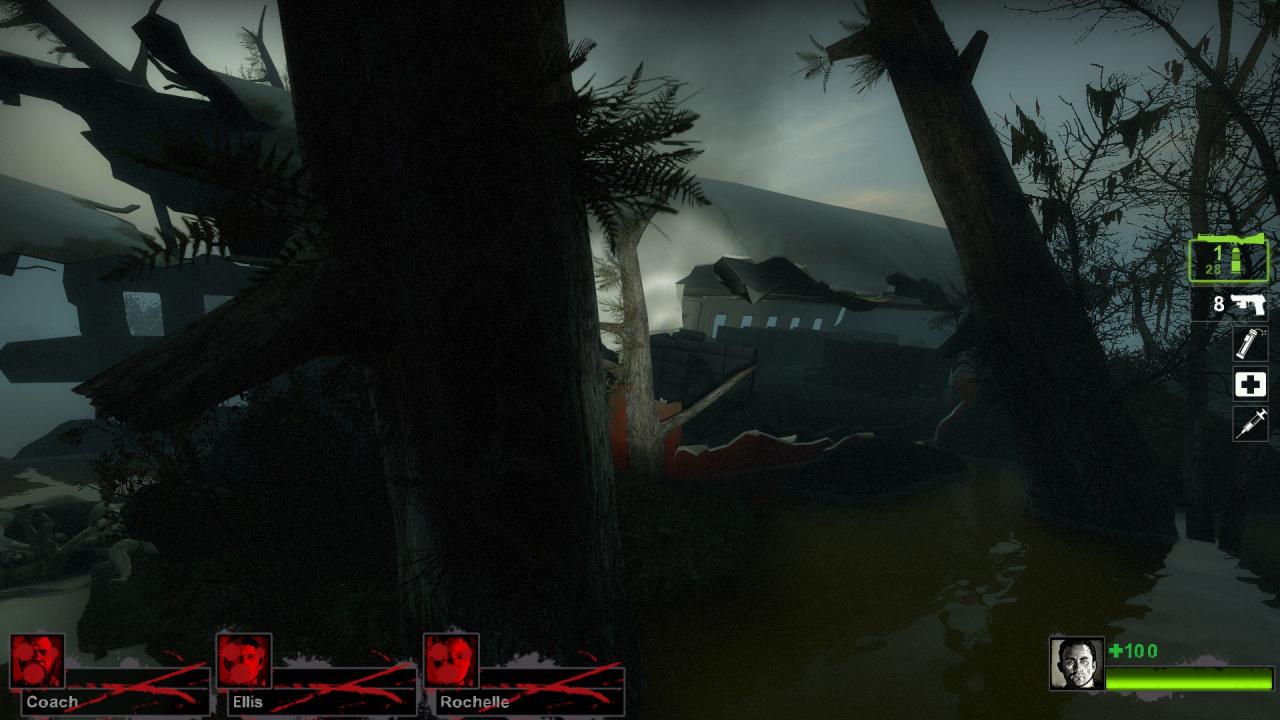 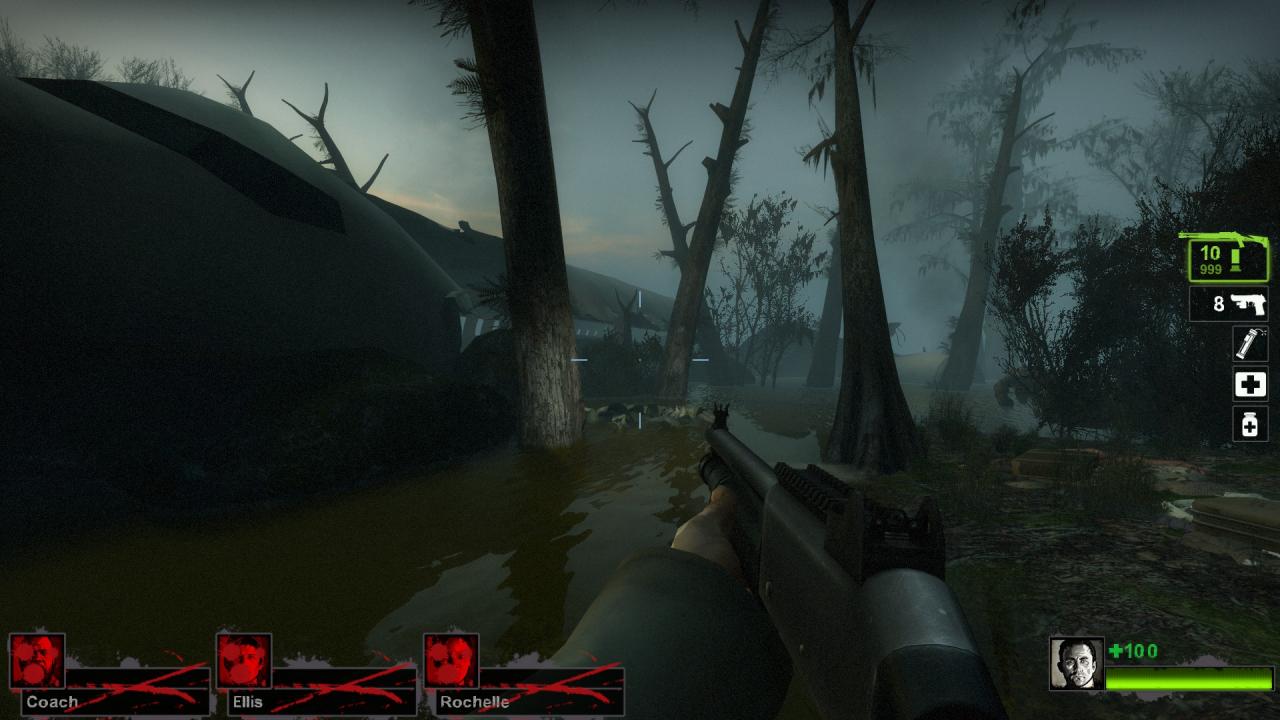 There is an achievement you can get for taking no damage during the horde that is caused by the airplane door.

The Plantation
Still in the swamp, the survivors find an abandoned plantation and a radio. They talk to the radio and hear that a man named “Virgil” is on his way to pick them up. After some time of fighting zombies, Virgil blows up the gate door and the survivors jump on the boat. 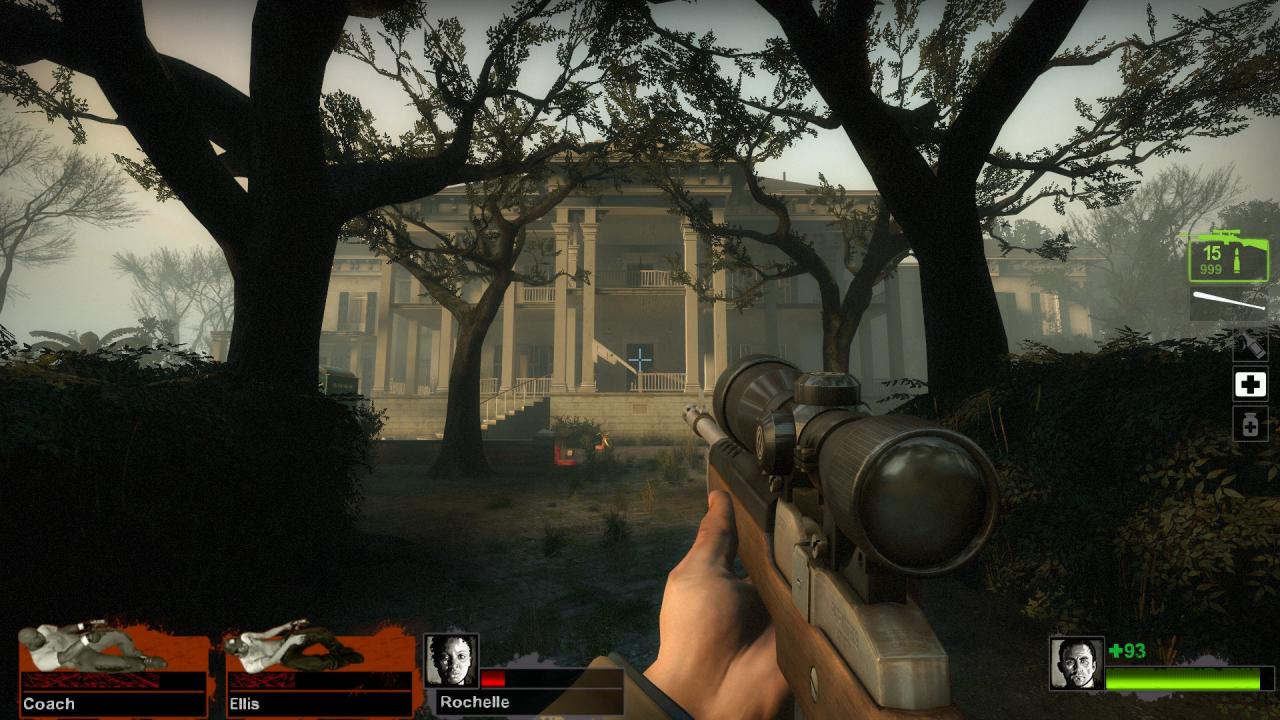 Landmark Location: Swamp Fever Chapter 4 (Plantation)
The Hard Rain Burger Tank
After getting saved by Virgil, he tells the survivors that he will get them to New Orleans if they get him gas for the boat. So, the survivors get off the boat and yell at nick for being a bad “gun monitor” as they left the gun bag on the boat. At least they have a burger tank right there with a gas station that is out of gas. 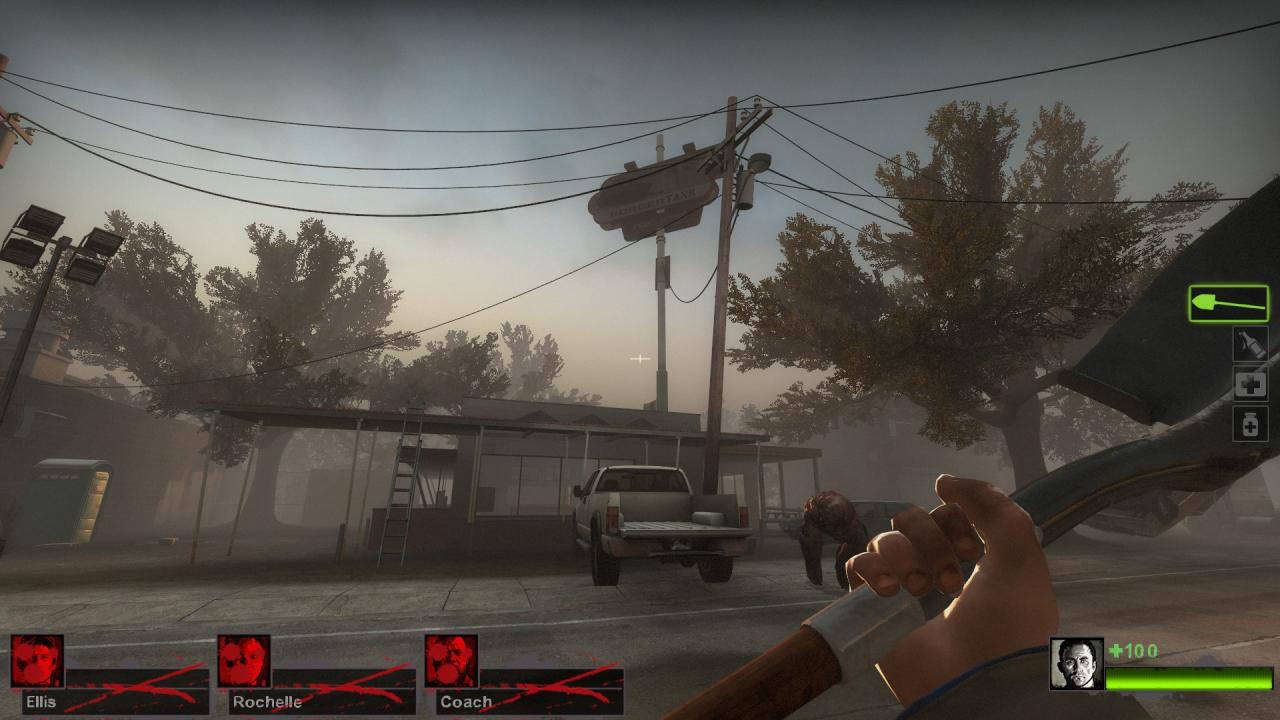 Landmark Location: Hard Rain Chapter 1 (Milltown)
The Sugar Mill
Still on the hunt for gas, the survivors run right into a sugar mill. Now, they didn’t think it would be much of a challenge but this sugar mill is full of zombies and witches. 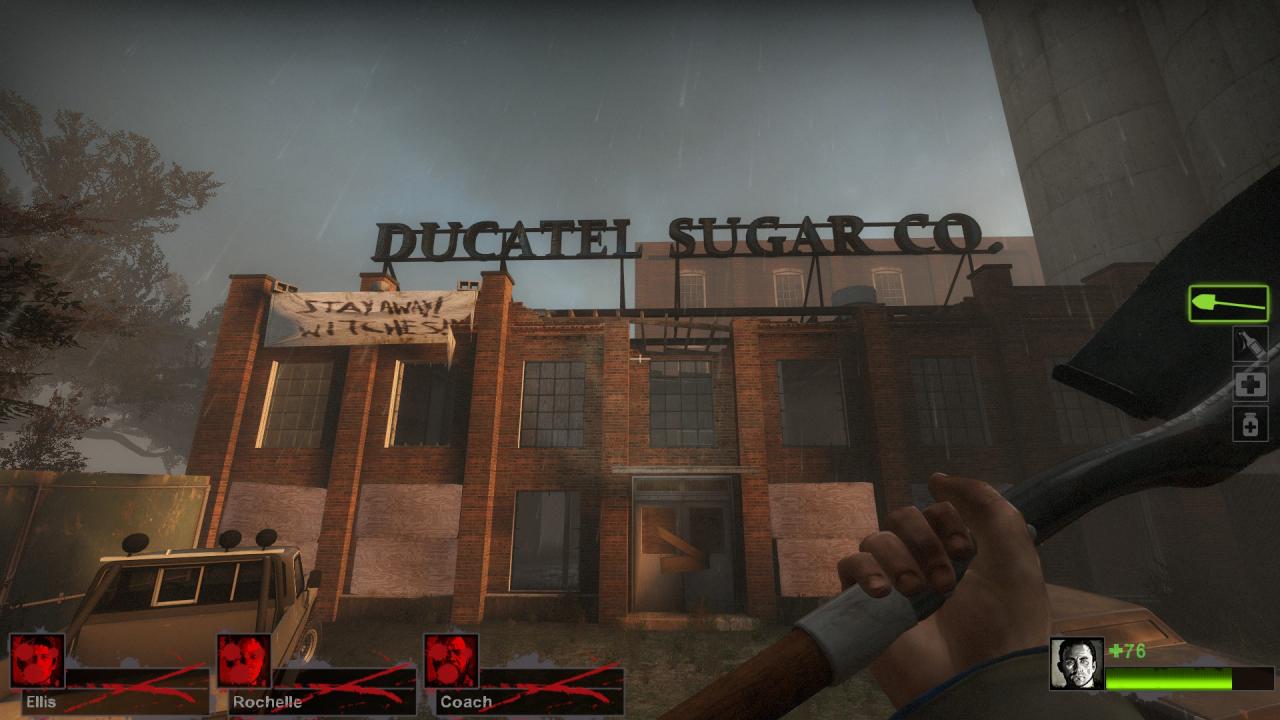 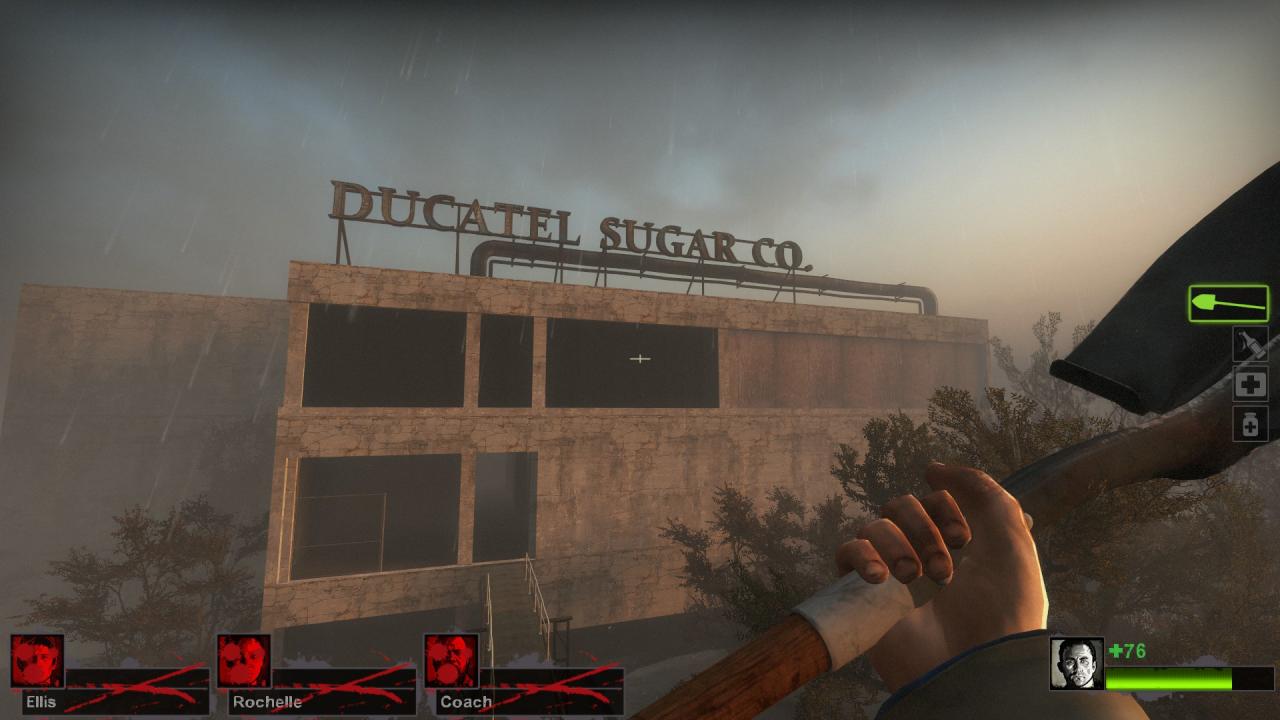 Landmark Location: Hard Rain Chapter 2 (Sugar Mill)
The Gas Station
Making it through the sugar mill and into the gas station, the survivors now have the fuel and they have to make their way back to Virgil. 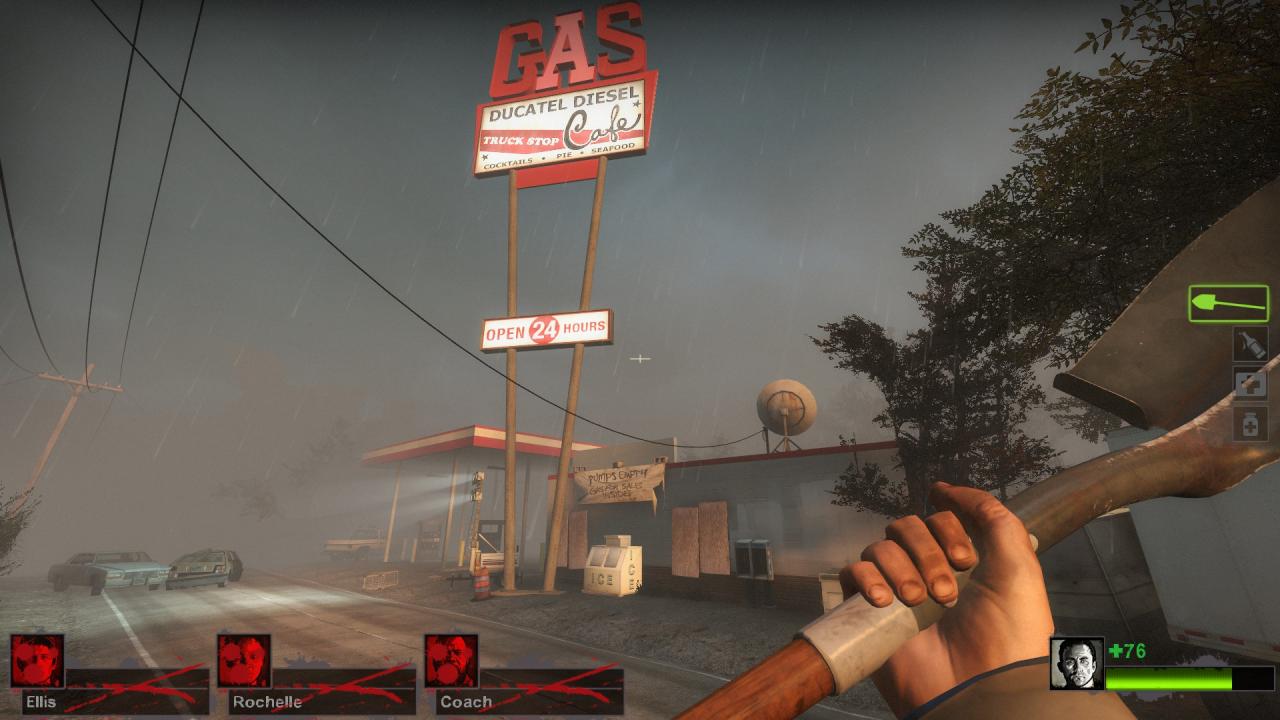 Landmark Location: Hard Rain Chapter 3 (Mill Escape)
The Parish Park
After Virgil drops off the survivors in New Orleans, the survivors make their way in and find a park. They walk through and search around for anything they can find. 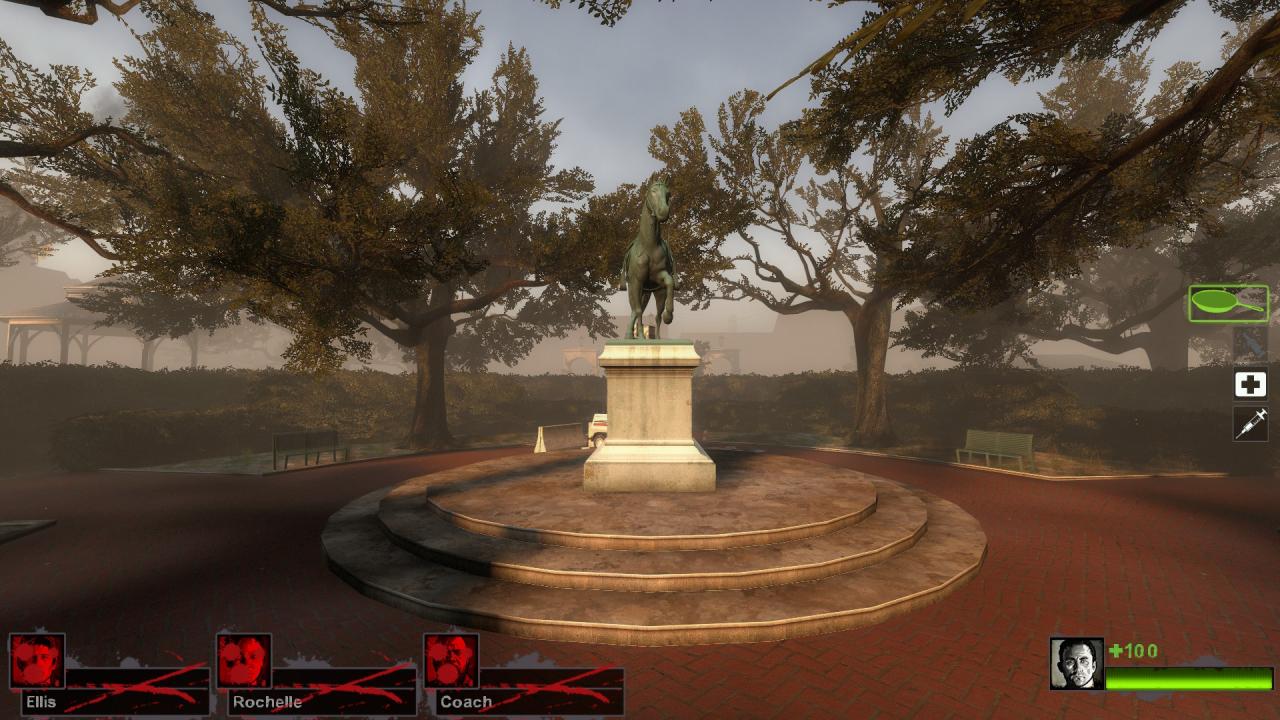 Landmark Location: The Parish Chapter 2 (Park)
The Cemetery
While the survivors are still walking through New Orleans in a search for evacuation, they get on a highway that will take them right to the bridge. Well, the military blows up their fast way to the bridge, forcing them to drop down into a cemetery. 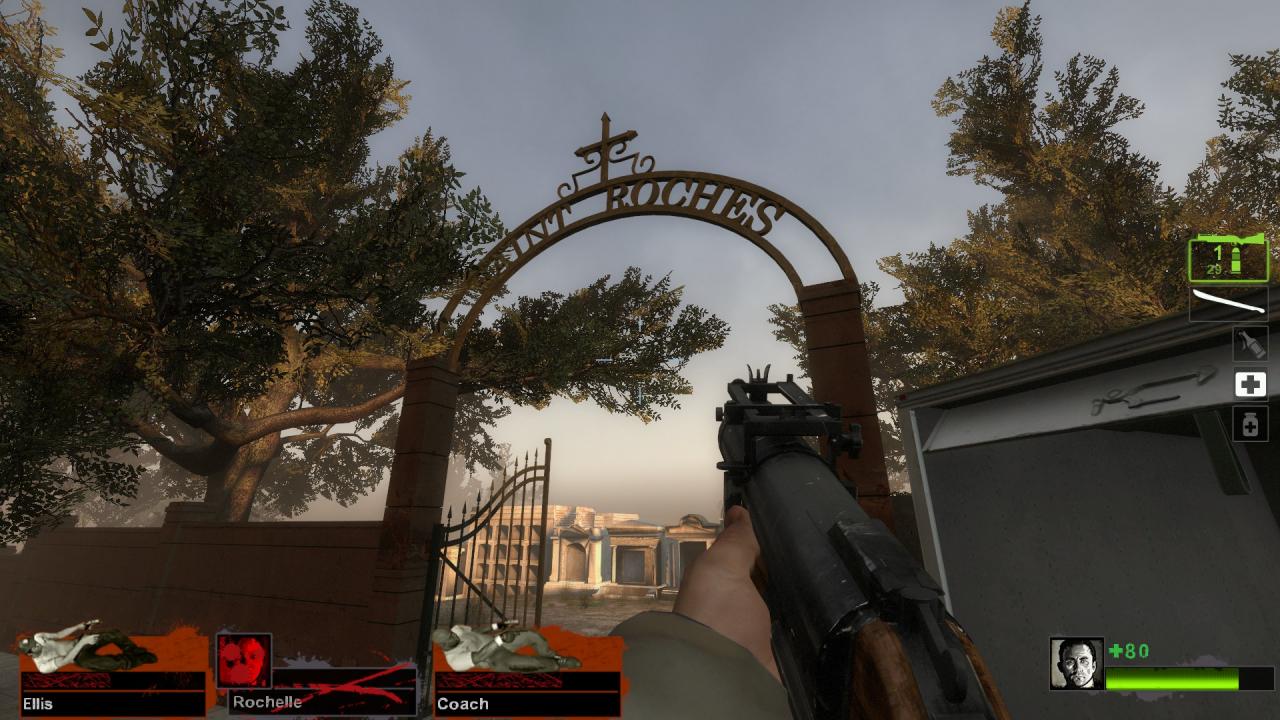 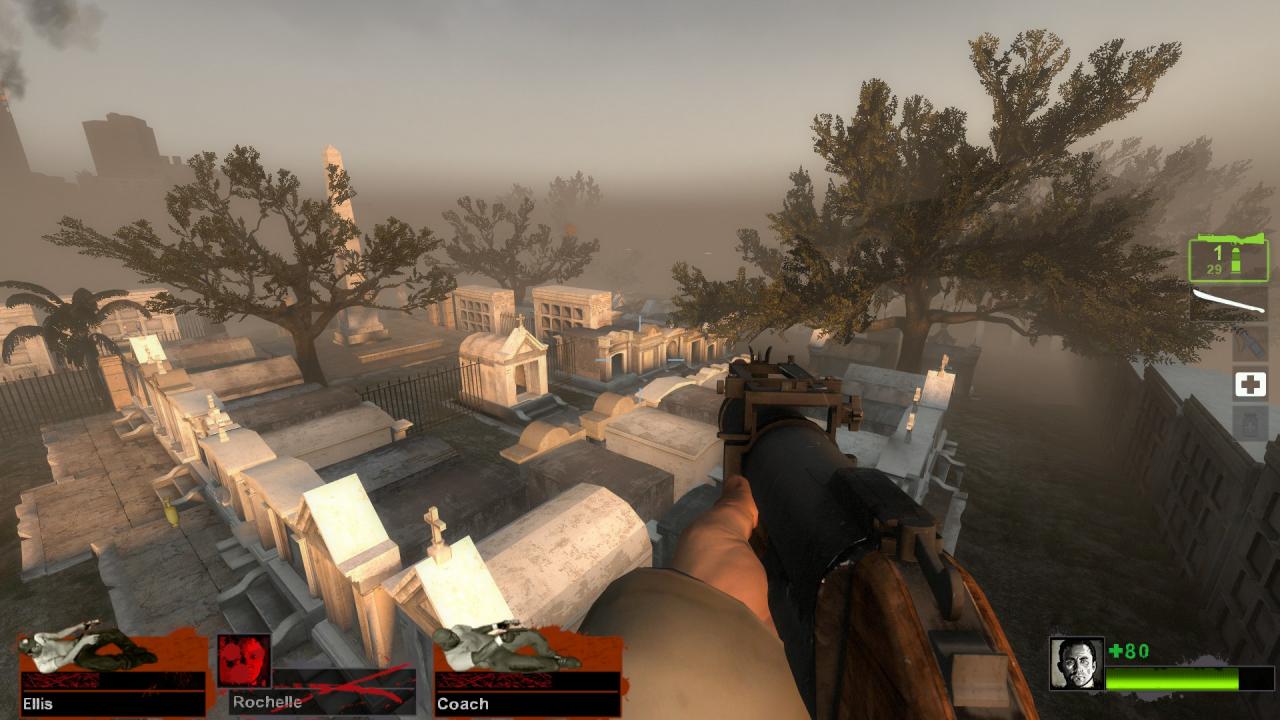 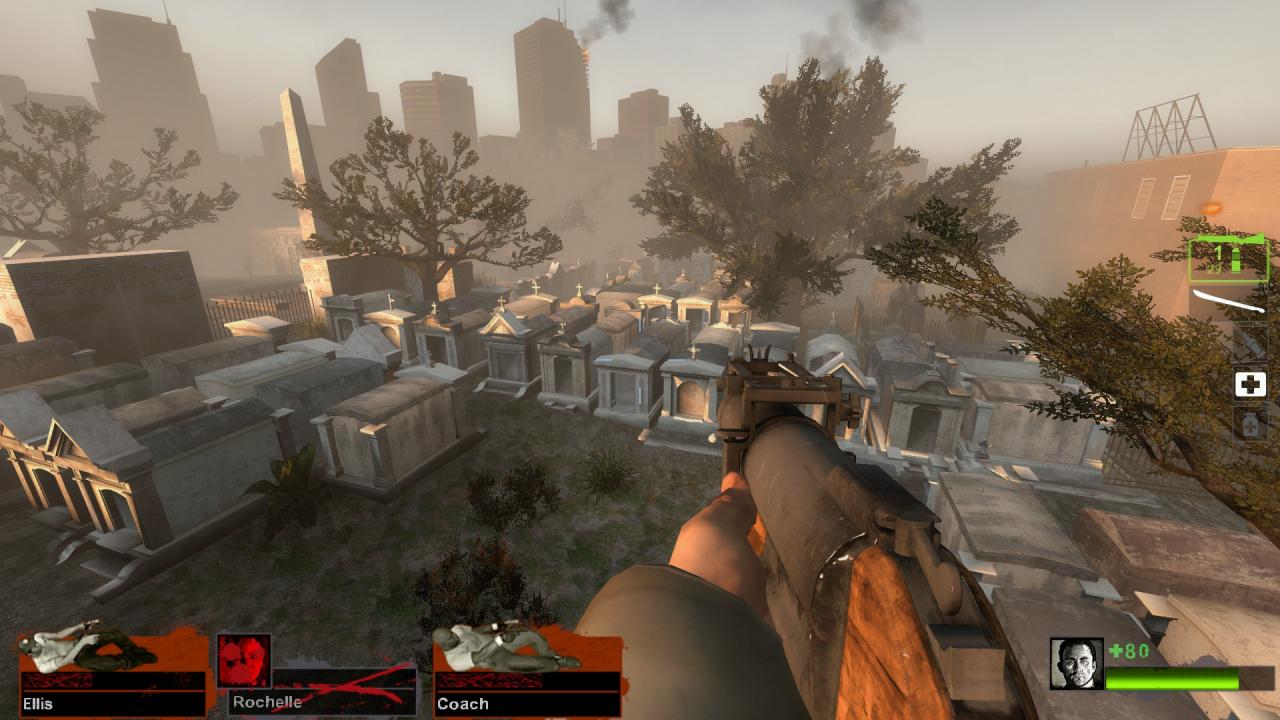 Landmark Location: The Parish Chapter 3 (Cemetery)
The Float
Now in the Quart of New Orleans, the survivors keep dodging the military while they are bombing everything. The survivors find a float that will get them across to the bridge (starting the float alerts a horde). 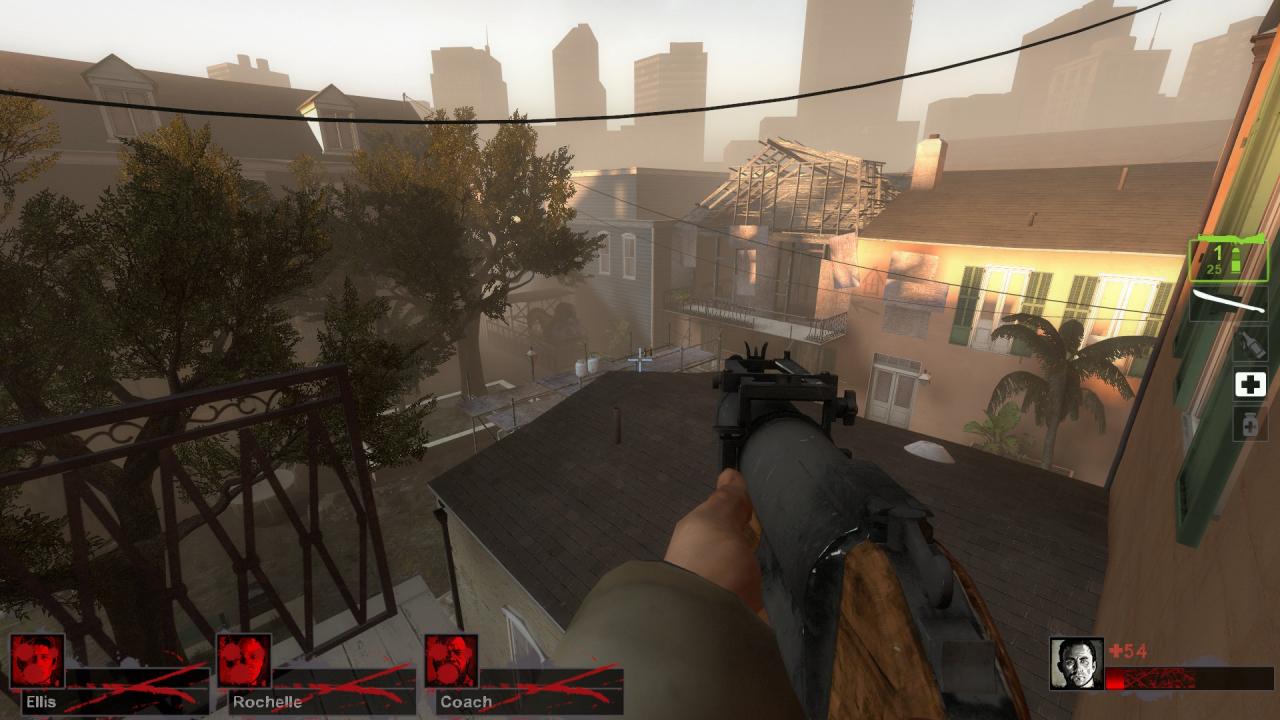 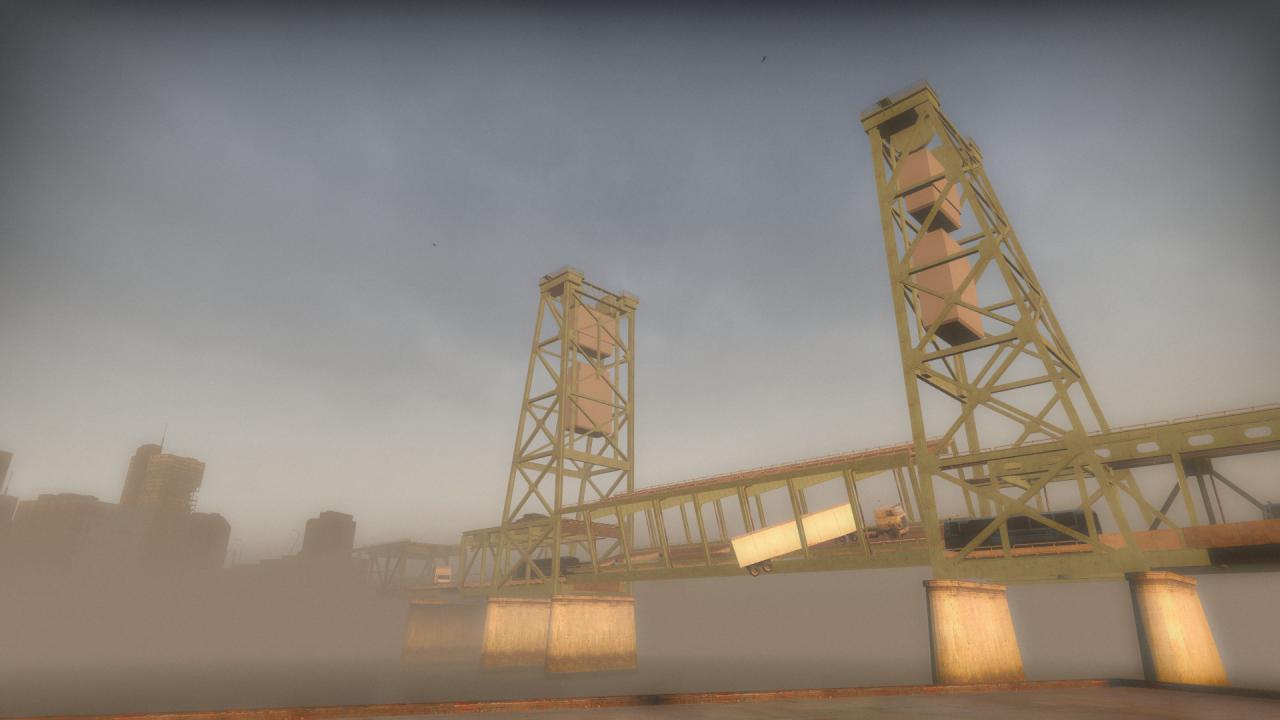