Spellsword is a Light Armor user who’s quicker on his feet and attacks primarily with a One-Handed sword, although he’s also proficient in Destruction magic. While not a completely stealth based character, the Spellsword is also levelled in Sneak and can start an offensive by taking out at least the first enemy by surprise. This sneak element is Enchanced with his mastery of illusion magic. The Spellsword can also heal himself with Restoration magic.

The above recommendation gives a balanced preference to magicka (for using all your spells), health (so you’re not too squishy) and deprioritises stamina (because you’ll be unlocking a restoration perk that makes stamina easy to replenish – Respite).

That being said this mix is purely down to personal preference. You’ll see in the screenshots further on in the guide that by the time I reached level 56 I had a distribution of Magicka: 450, Health: 300 and Stamina: 100. I chose to boost the magicka side of things more because I rely much more heavily on the spell half of being a spellsword.

If you’re a spellsword who spends more time in melee combat with only a touch of magic for backup, then you might like to put more points into stamina so you can complete more power attacks before needing to replenish your green bar. Likewise if you’re an experienced player and feel like you can skillfully avoid death with your strategy and natural talent then feel free to take all those points you would have put into health and use them to boost your other attributes instead. 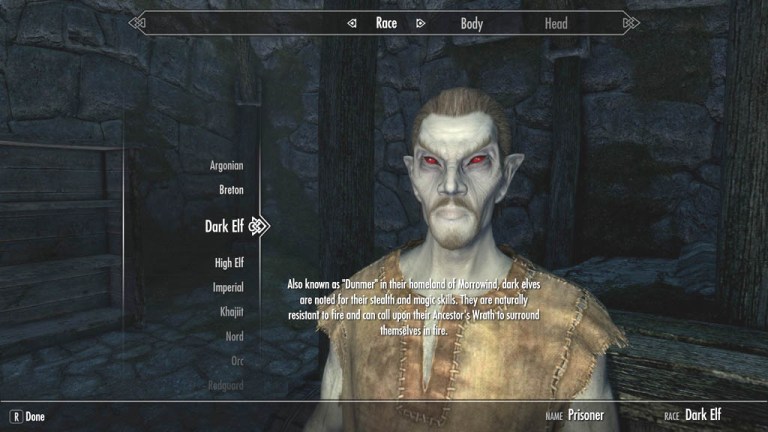 We picked Dunmer (Dark Elf) for their starting skill-level proficiency in a number of magic schools as well as Light Armor and Sneak. Their Ancestor’s Wrath flame cloak power and fire resistance also work well with our perk and spell choices which we’ll go into later in the guide.

The only benefit you get from choosing one race over another is starting skill level buffs (which can be easily compensated for later on if you want to choose a race without starting skills that match your build) and racial powers/attributes. While these racial powers can be very useful, especially early on (e.g. An extra 50 Magicka for Altmer helps a lot in mage builds), they’re often not dealbreakers if you want to pick a race without a power or ability that matches your intended build.

Optional perks: As we’ll be keeping our sword in our right hand and switching between spells in the left hand, we won’t need either Illusion Dual Casting or Master Illusion as all Master Illusion spells require both hands to cast. If you wanted to vary this build you could always unlock Master Illusion and learn Master Spells like Mayhem to turn whole dungeons against each other. For the purpose of our Spellsword build we’ve kept magic to one hand though.

2. Destruction Perks (6 Perk Points)
To conserve perk points we recommend choosing one branch of destruction magic to focus on, either: Fire, Frost or Shock. For our spellsword we’re going to choose Fire. The reason being that the Augmented Flames perk that increases the damage of fire based spells also boosts our Ancestor’s Wrath racial power and because we’re levelling Illusion magic we have access to the Aspect of Terror perk which boosts our fire spells even further.

Optional perks: As with the Illusion perk tree, due to focussing on one handed magic we won’t be taking the dual casting perk or Master Destruction. The only down side in this case with not taking dual casting, is that it’s needed to reach the Impact perk, which is quite useful. We’ve done without it in this build, but if you wanted the extra punch you could waste a point on dual casting to get to it. We also didn’t take Intense Flames as personally I don’t like making enemies flee, I’d prefer to keep them close by so I can finish them off.

Perks not taken/Optional perks: As with the magic skill trees we’ve avoided the dual weilding based perks, because we’ll be keeping our off hand free for spell weilding. It also make sense to pick either Swords, Maces or Axes as your primary weapon and then choose the corresponding weapon specific perk. In our case we chose Swords which use the Bladesman perk. Obviously if you decide to focus on a different weapon then pick the corresponding perk relevant to your weapon class, instead of Bladesman. 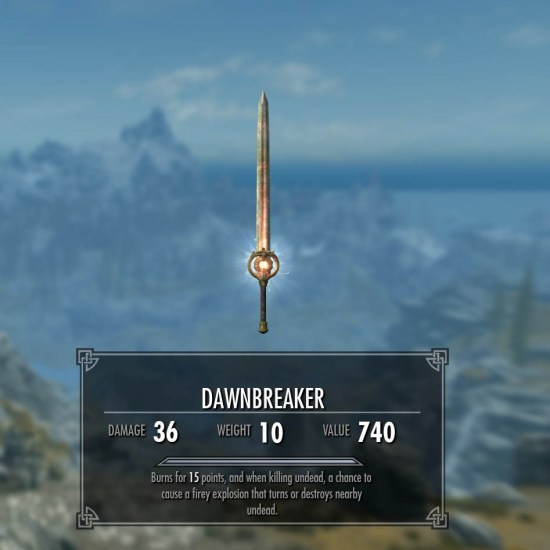 While not the most powerful sword in Skyrim in terms of pure damage output, Dawnbreaker has a number of other benefits. It has a synergy with perks in our build and it also just looks really cool. What synergies? The bonus burning damage is increased by Augmented Flames and the explosion that destroys and turns undead (a special enchantment called ‘Meridia’s Retribution’) is buffed by Necromage. 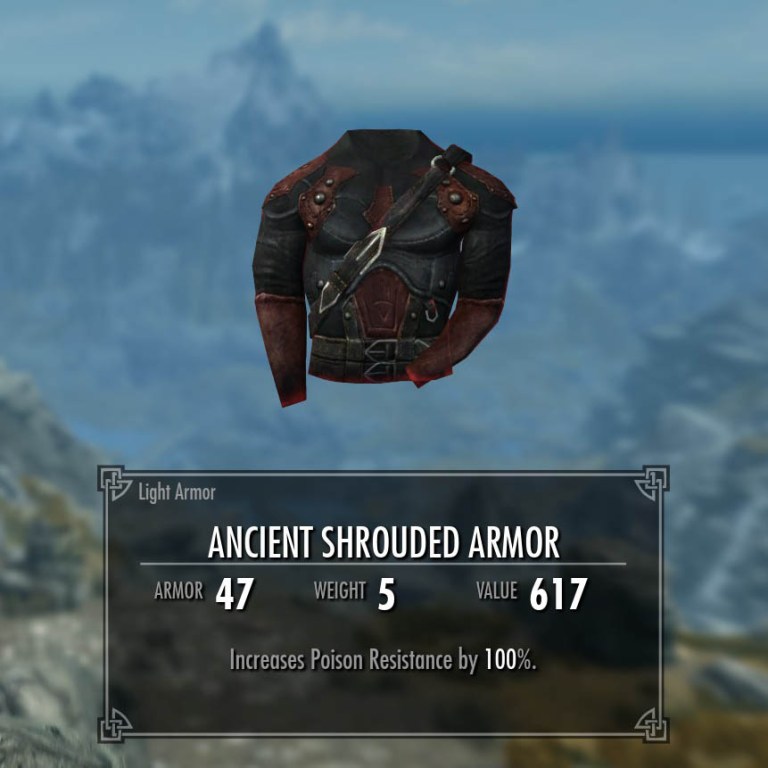 The long way to get this Armor set is by completing the Dark Brotherhood side quest ‘Locate The Assassin Of Old‘ after meeting the bonnus requirement of the quest ‘Breaching Security‘. That’s fine if you want to get it that way, and definitely feels like an acomplishment. But if you want to obtain the armor much earlier in the game, you can use the Ritual Stone to bypass a locked door that would otherwise keep the armor hidden until completing the aformention Dark Brotherhood quests.

The Ancient Shrouded Gloves in particular are a game changer for stealth attacks. They double sneak attack damage with one handed weapons, which when stacked with the backstab perk leads to sword attacks with a twelve times multiplier.

Dragon Priest Mask or Ancient Shrouded Cowl?
If you want, you could wear the entire Ancient Shrouded Armor set and then also take the Matching Set perk, mentioned earlier that we didn’t take. This would give you a 25% improvement to armor rating and a boost to bow damage (from enchantment on Ancient Shrouded Cowl). Seeing as how we’re not using a bow in this build, and not using the Matching Set perk, we decided to swap out the cowl for the Morokei Dragon Priest mask, which gives an impressive 100% increase to Magicka regeneration. As the mask is classed as light armor, you’ll still receive the benefits from perks that require you to wear all light armor.

Your spell choice really comes down to personal preferance. The only must haves for this build are a flame spell (to take advantage of our fire magic buff from Augmented Flames and Aspect of Terror), Invisibility (for stealth attacks) and a healing spell (for staying alive and also stamina replenishment). Other than that you can feel free to develop your own play style by picking whatever spells from our focus magic schools that work for you. The choices below are a recommendation. 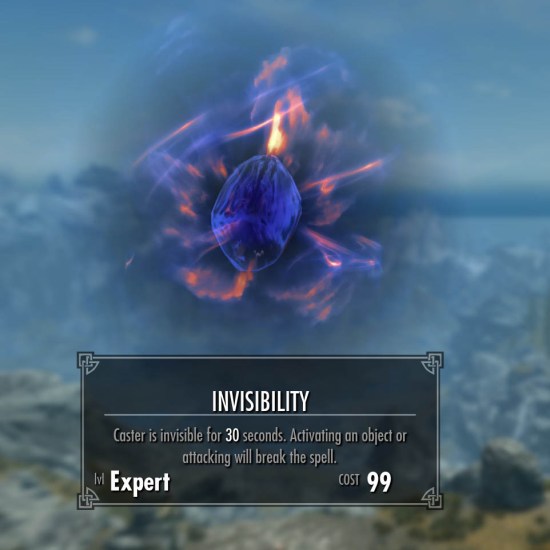 Invisibility is an extremely useful spell in Skyrim. It makes sneaking up on an enemy and landing a devastating stealth attack a lot easier. It can also be used strategically to sneak through much higher level areas than the player’s current character level for the purposes of attaining high level weapons, armor and special items earlier in the game than would otherwise be possible. 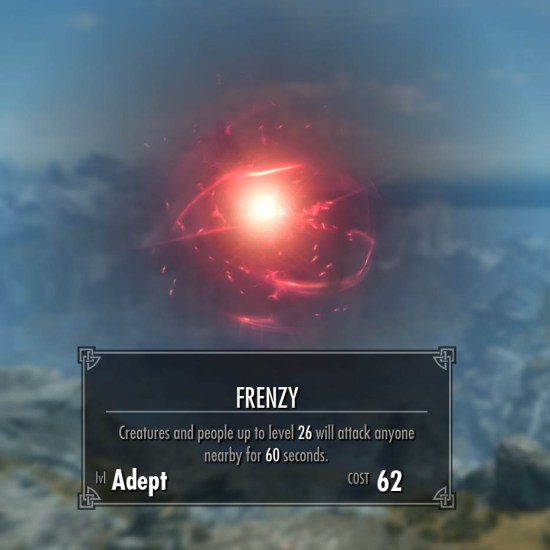 This spell isn’t a must have for every player but as you’ll be levelling your Illusion up to Expert level for using Invisibility it can be a very useful Spell to have in your arsenal in the early to mid game. Especially when taking out dungeon bosses solo, casting Frenzy will send all the minions fighting each other and even helping take down the boss, while you can focus your efforts on the biggest threats in the room. 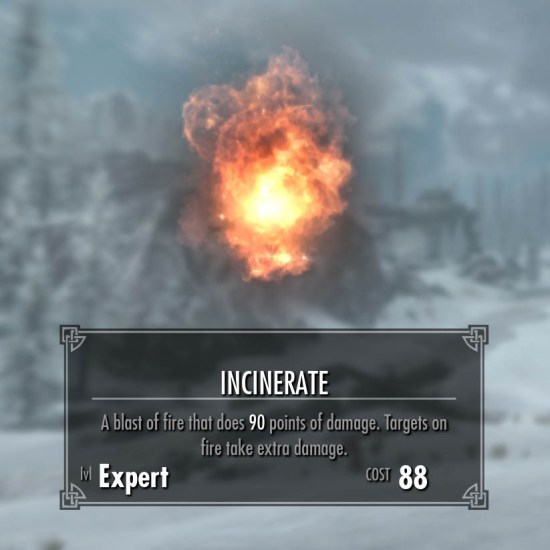 Incinerate Vs Fireball
Why use Incinerate over Fireball, isn’t Fireball better? Well… yes and no. It all comes down to playstyle and how accurate you are at spellcasting. If you find it hard to hit your targets dead on then Fireball is probably a good idea, as it does damage over a wider area. You can just shoot your fireball in the general direction of the enemy and it will explode with a decent area of effect, potentially hitting several oponents.

If you’re more of a dead shot and enjoy sniping your foes one at a time then I’d recommend Incinerate. It does more damage and when levelled with Augmented Flames and Aspect of Terror becomes deadly at both short and long range. Also does extra damage when hitting targets already on fire. 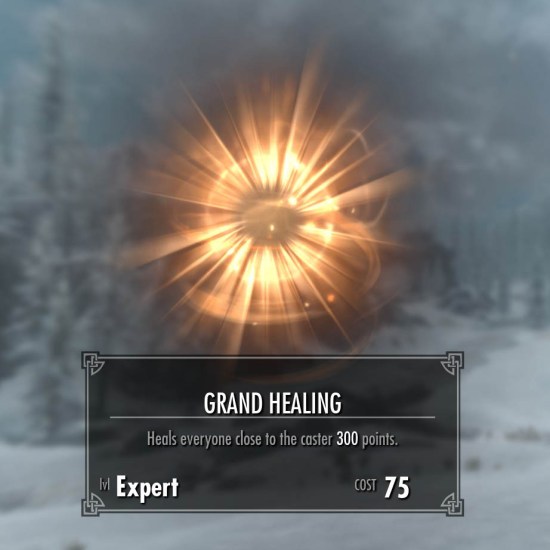 Even including master spells, Grand Healing is the quickest way to regain health using magic in Skyrim. Healing you and any nearby allies for 200 points (300 points when you unlock the Regeneration perk) and able to be cast one handed, Grand Healing is one of my all time favourite Skyrim spells.

How to Play this Build 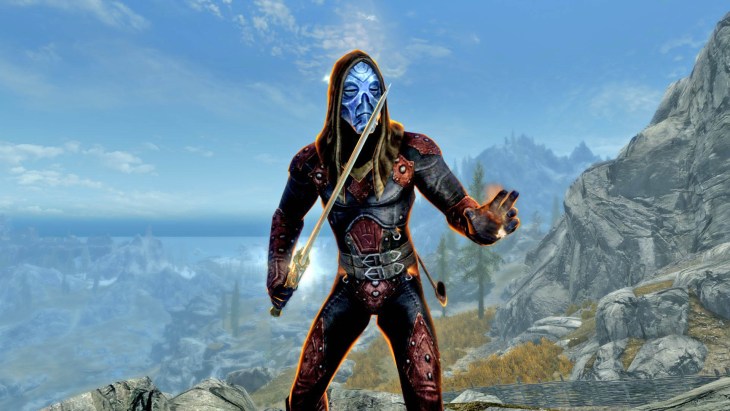 One of the simplest and most effective ways to play this build is simply to keep Dawnbreaker equipped in one hand and Grand Healing in the other, slash and stab your way through all your foes and when your health gets low just cast Grand Healing to stay alive. If you want to get around without fast travel you can cast Grand Healing on the go to replenish your stamina without stopping for infinite running.