Melffy is a fan favorite archetype, but proper documentation on what to run and why in competitive play is shockingly limited. This is a guide on how to play Melffy competitively.

The main issue that people face when deckbuilding Melffy is that they assume that the best way to play Melffy is to fire off their hand summoning effects as much and as often as possible. This is wrong. The main strength in Melffy is in it’s support. 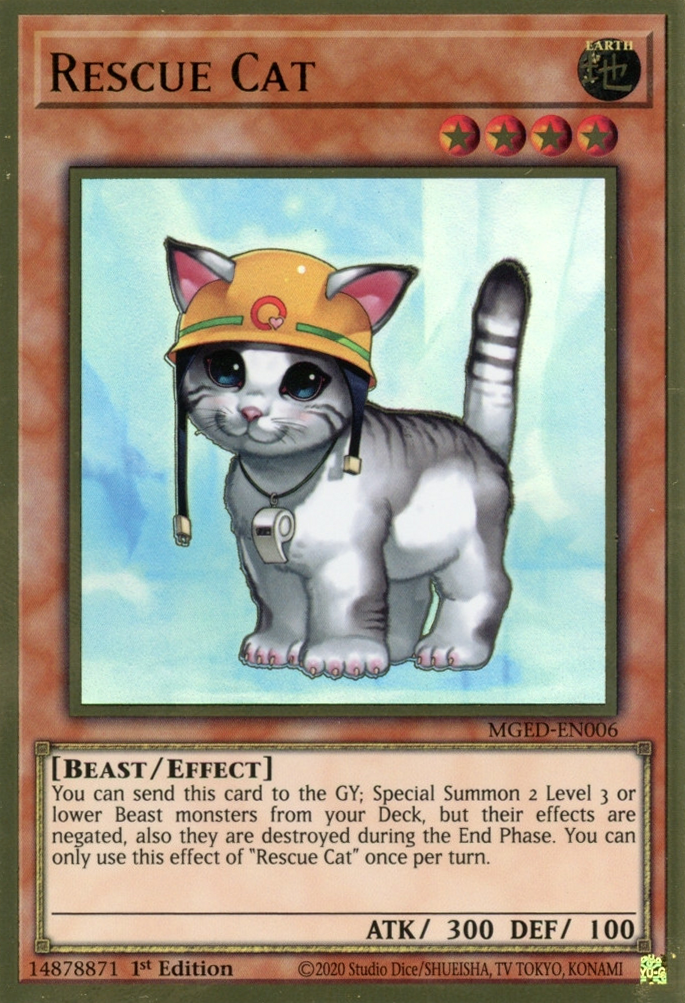 Rescue Cat is a great card both going first and going second. 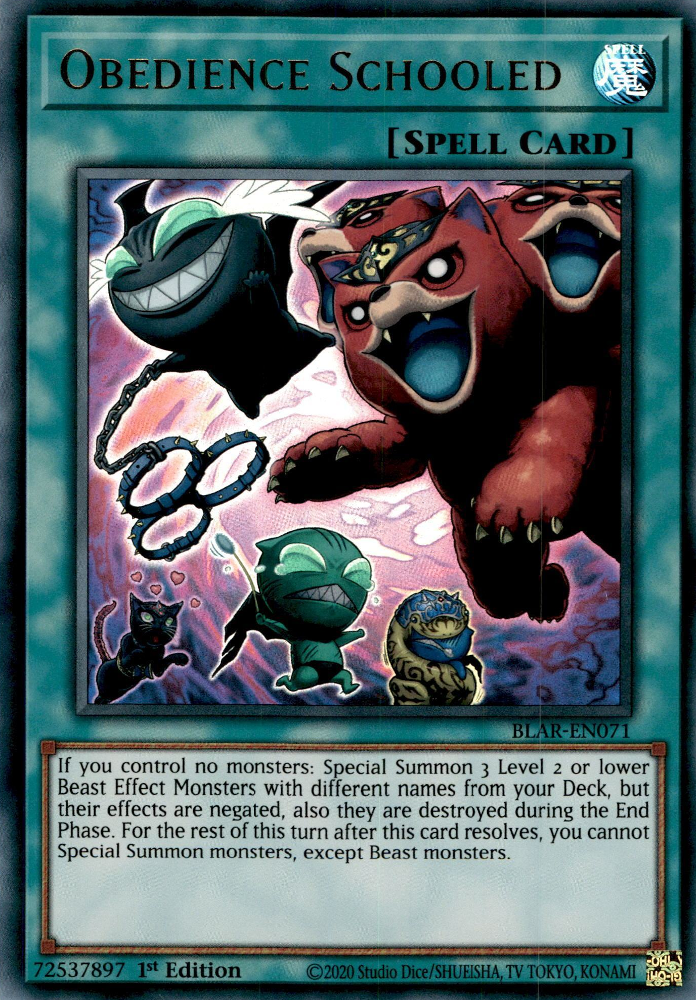 Obedience Schooled can potentially turn a single card into 3 interruptions that dodge Nibiru, allowing you to load your main deck with handtraps and other interactions.
With this in mind, think of the hand summoning effects of Melffy as a sort of backup strategy.
This guide will only instruct you how to play the Melffy aspect of your deck. This guide is written to explain how Melffy works in a vaccum, and assumes that you at least know enough about the base deck that you’re ready to run the Melffy variant.

Run 3 Obedience Schooled; 3 Rescue Cat; 2 Tri-Brigade Kerass; 1 Hop Ear Squadron; and 2 Kalantosa, Mystical Beast of the Forest. For the Melffys in the Main Deck, you need either 2 Melffy Catty and 1 Melffy Puppy, or 2 Melffy Puppy and 1 Melffy Catty. For the Extra Deck: 1 Herald of the Arc Light; 1 Sky Calvary Centaurea; 1 Joyous Melffys; 1 Downerd Magician; and 1 Divine Arsenal AA-ZEUS – Sky Thunder. And then go ahead and fill the rest of the slots with whatever else – The good handtraps like Ash Blossom and Infinite Impermanence; draw cards like Pot of Prosperity or Upstart Goblin; the other archetype you’re trying to mix with it, probably Tri-Brigades.

Consult this flowchart if you have both starter cards in your hand. From here, proceed to the Section relevant to the turn order. 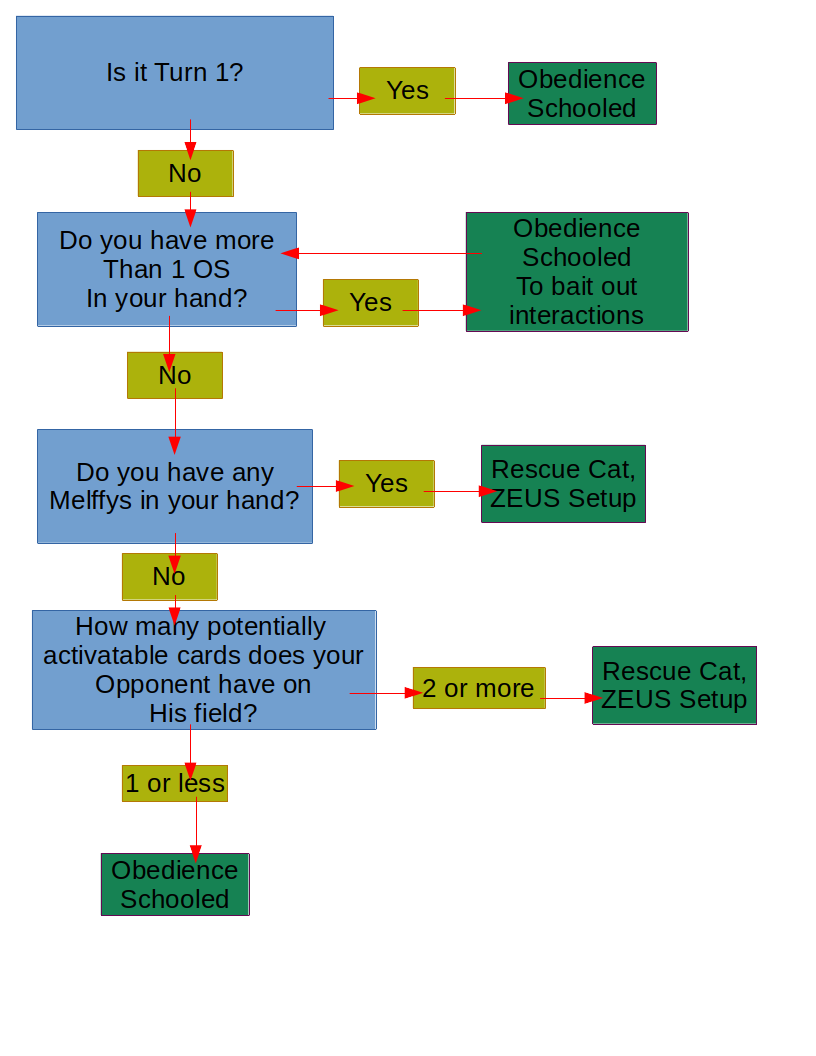 With Catty and Puppy on the field, and when your opponent summons a monster and triggers their effects:

With Rescue Cat; the ZEUS setup as mentioned in the flowchart:

From here, the gameplan gets considerably simpler. You mainly want to focus on keeping both Kalantosa in the field or the graveyard. The best part about Joyous Melffys is that it’s effect is completely XYZ Material agnostic, so as long as you have access to any 2 Level 2 Beast Types on the field, then you have a guaranteed 2 pops on your opponent’s turn. On the flip side, try to keep your opponent from banishing your Kalantosa, because if they do, your strategy is completely neutered. 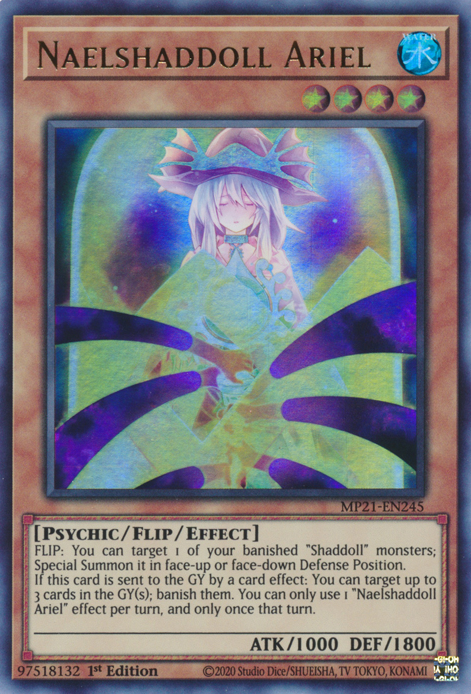 Two big cards to watch out for are Naelshaddoll Ariel and Sky Striker Mecha – Shark Cannon, which Melffy is extremely vulnerable to! Be very careful when dealing with any archetype with graveyard banishing cards.

Everything that’s been said is making the best of a best case scenario. As important that Kalantosa is to the main strategy of this deck, it’s still a garnet. And any competitive YGO veteran knows that garnets are attracted to the hand like flies to honey. This Section is a miscellaneous selection of situations in which you have drawn a Kalantosa, in descending order of desirability.

This Section mostly exists because I wanted to tell you what a 2kal was.

I’ve seen Tri-Brigade Melffy lists that run the tiniest ratios needed to use OS as possible – 2 Kalantosa and only 1 Puppy. I feel like that misses the point entirely. OS still locks you into Beast types which heavily restricts what you can do, you’re not getting the most out of OS, and either way you’re still going to draw 2kal and hate yourself.
Go ahead and run another Joyous Melffys if you are absolutely strapped for anything else as your 15th Extra Deck slot. JM is able to dodge any Lightning Storm that your opponent will occasionally throw at you, but there are situations where you’ll be screwed over before even your opponent’s turn.
If you have read this guide over, you may be discomforted by the idea that this entire archetype is hyper-focused around lucksacking two cards which are disproportionately stronger than anything else that it has to offer. I understand your frustration, but this is just how it tends to go with jank. A lot of archetypes don’t even have that second card.
I understand that this guide grossly over-analyzes an archetype with two good cards.

This guide is possible thanks to Youtube user Melffy Rabby. The guide is a variant of his theories and would not exist without the incredible effort he made to create optimal strategies for the archetype. If you liked this guide, please subscribe to his channel at https://www.youtube.com/channel/UCMF7bWkZ3x1W_by_nnbY5kQ
By thegwall