A guide to the use of jar of pickles, an odd buffing item that trades off damage and fortified damage for attack speed. 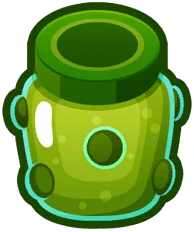 You can find pickles in the Geraldo shop from level 1 in the top right corner, they have a base price of $50 and last for 8 rounds.

The pickles will be upgraded when Geraldo reaches level 11, now adding a point of fortified damage.

At level 16 the pickles are upgraded again, now adding a second point of fortified damage.

*At 4 damage the overall tower damage will increase due to cleaving in most situations.
**At 5 damage performance may still increase before round 80 on high pierce towers.

As you can see, towers with 3 or less damage gain a direct benefit in overall dps, while a tower with 4 or 5 damage could circumstantially perform better depending on the towers pierce and fire rate. Ideally low level pickles are best used on a Bloonjitsu or Nevermiss to aid them with carrying the earlygame near and after round 40.

Benefit is felt at a much higher level now, not only does the bonus fortfied damage make it easier to justify on higher damage towers, there is now less of a downside in giving 7 damage towers pickles (this allows them to oneshot rainbows), as the dps vs fortifieds is slightly higher, so any wastage is now outweighed by the benefits of cleaving.

As for general use, typically this upgraded potion is worth giving to towers with a base damage of 5 or lower and performs best on super monkeys, buccaneers (3/4-1-0) and tack shooters.

As shown with the table, potential benefit can be felt on almost any tower, provided fortified bloons in the lategame are the source of ire, for this use case dropping 4 pickles before the start of round 98 will allow towers to more easily deal with the fortified bfbs and ddts at the end of the game. The last tier of pickles would be worthwhile on a tower with up to 8 base damage with a maim moab present, or 7 otherwise.